One word to describe Bhutan – Shangri La – a paradise of complete bliss, delight, and peace. The land of happiness - where wealth is measured by your happiness quotient. Yes, Bhutan is the only country in the world which has a measure for happiness, GNH (Gross National Happiness).

Surprised?? Don’t be!!! This country has inculcated a culture of staying happy and imparting happiness.

From mesmerizing mountains to rich cultural heritage to spotlessly clean cities and towns, Bhutan offers it all. Bhutanese adore their mountains, admire their Dzongs, and revere their Lakhangs. Bhutanese cuisine is a veritable treat to gastronomes. Located at the foothills of the great Himalayas, this paradise comprises rather unique cultural landscape which has witnessed the country’s customs, traditions, history, and ways of living. The diversity of the landscape at Bhutan is like a kaleidoscope – from serene Samdrup (the oldest town in Bhutan) to baffling Bumthang to perplexing Phobjika to Tranquil Thimpu to placid Paro to humble Haa (the humility and innocence of the people here is astounding).

Witness the culture of “the awakened one” Buddha. Get bewitched in the land of unique customs and people with deeply held beliefs - join us in exploring and experiencing the mystical land of happiness.

Arrive at Airport & Board your coach for Bhutan by 12 noon

Samdrup Jongkhar is the gateway of the country’s east and shares borders with Assam. It is by far the largest urban center in eastern Bhutan. Jongkhar town holds the distinct honor of being the oldest town in Bhutan. This border town is a bustling little settlement packed to the brim with shopkeepers and hawkers from across the border. Dzong at Jongkhar is known for its heritage value.

Trashigang is set on a scenic hillside & was once a bustling trade center for merchants looking to barter their goods in Tibet. It is the junction of the East-West highway, with road connections to Samdrup & then into the Indian state of Assam. Trashigang is also the principle market place for the semi-nomadic people of Merak and Sakteng, whose unique way of dress stands out from the regular Bhutanese Gho & Kira. 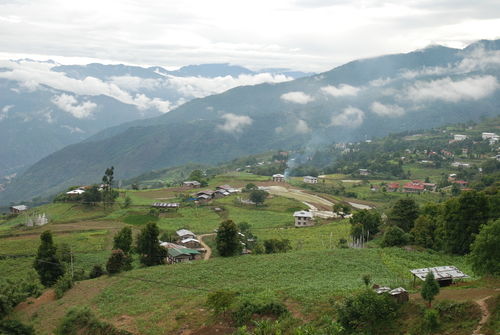 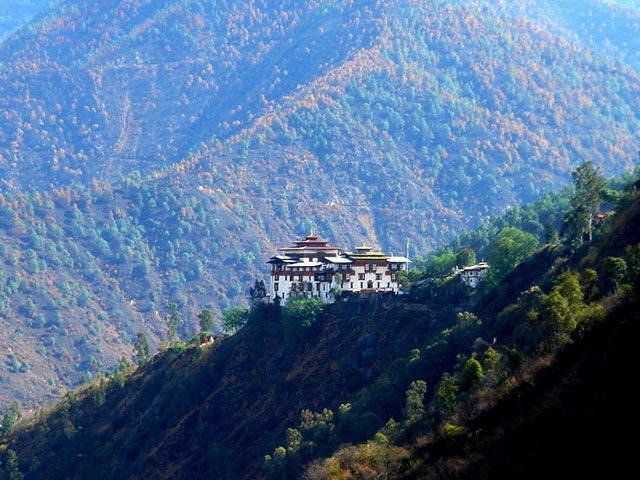 The road approaching Mongar is one of the most spectacular journeys, It passes over sheer cliffs and through beautiful fir forests and green pastures. Passing this way will have the opportunity to see countless varieties of rhododendrons, on clear days you can even catch a glimpse of Gangkhar Puensum (7541 meters), the world’s highest unclimbed mountain. The region is known for its weavers and textiles and fabrics produced here are considered some of the best in the country. 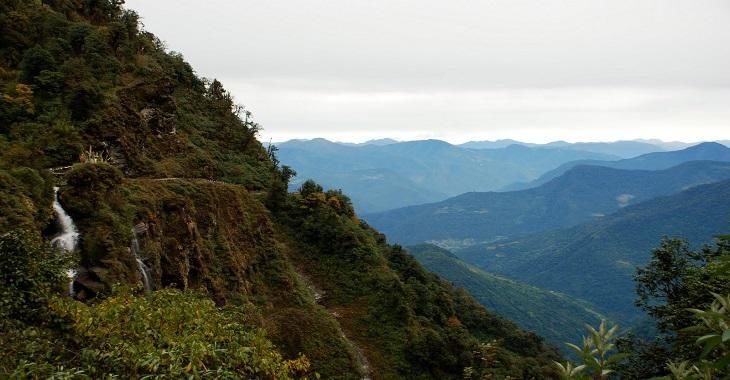 Bumthang Valley consists of 4 main valleys Ura, Chumey, Tang & Choekhor. Choekhor. The valleys are broad and gentle carved by the ancient glaciers. The wide and scenic valleys draws a large number of tourists each year. The name Bumthang has two probable origins; the first is that it is named after a Bumpa, a vessel for holy water which the valley resembles in shape. The second origin implies that it is the Valley of Beautiful Girls as Bum translates to ‘Girl’ and Thang means ‘flat piece of land’.These fertile valleys are covered in fields of buckwheat, rice and potatoes. Apple orchards and dairy farms are also common sights here. This serene region is one of the most peaceful places in the kingdom 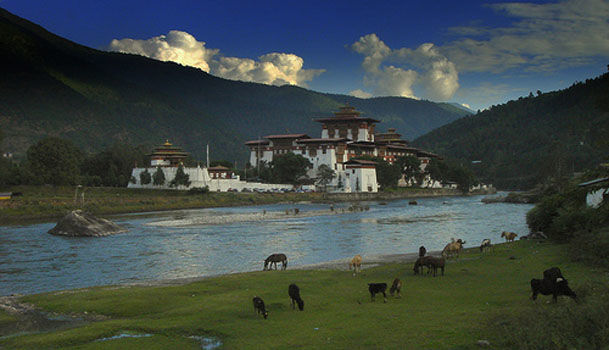 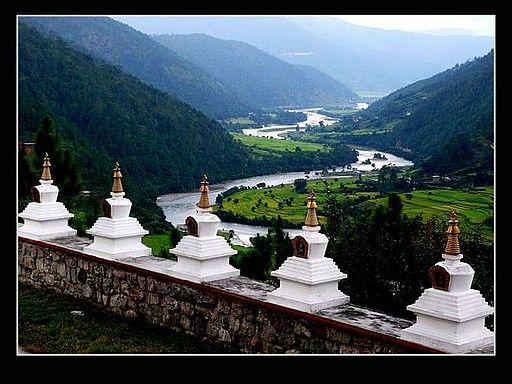 Phobjikha is a bowl-shaped glacial valley on the western slopes of the Black Mountains, bordering the Jigme Singye Wangchuck National Park. Because of the large flock of black-necked cranes that winters here, it is one of the most important wildlife preserves in the country. In addition to the cranes there are also muntjacs (barking deer), wild boars, sambars, serows, Himalayan black bears, leopards and red foxes in the surrounding hills. The Nakey Chhu drains the marshy valley, eventually flowing into the lower reaches of the Punak Tsang Chhu. Some people refer to this entire region as Gangte (or Gangtey), after the goemba that sits on a ridge above the valley. The valley is snowbound during the height of winter and many of the valley's 4700 residents, including the monks, shift to winter residences in wangdue Phodrang during December and January, just as the cranes move in to take their place. The local residents are known as Gangteps and speak a dialect called Henke 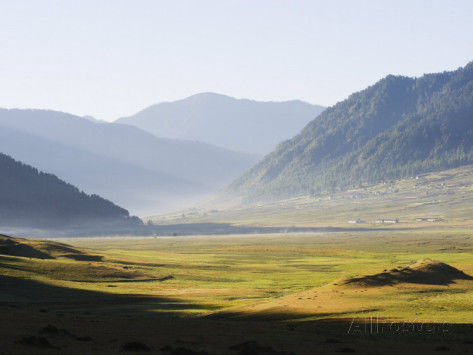 Punakha Dzongkhag has been inextricably linked with momentous occasions in Bhutanese history. It served as the capital of the country from 1637 to 1907 and the first national assembly was hosted here in 1953. It is the second oldest and second largest dzong in Bhutan and one of the most majestic structures in the country. Two major rivers in Bhutan the Pho Chhu and Mo Chhu converge in this valley. Punakha Dzong is built at the confluence of these two rivers and is an especially beautiful sight on sunny days with sunlight reflecting off the water onto its white-washed walls. In addition to its structural beauty, Punakha Dzong is notable for containing the preserved remains of Zhabdrung Ngawang Namgyal, the unifer of Bhutan as well as a sacred relic known as the Ranjung Karsapani. This relic is a self-created image of Avalokiteswara that miraculously emerged from the vertebrae of Tsangpa Gyarey the founder of the Drukpa School when he was cremated. 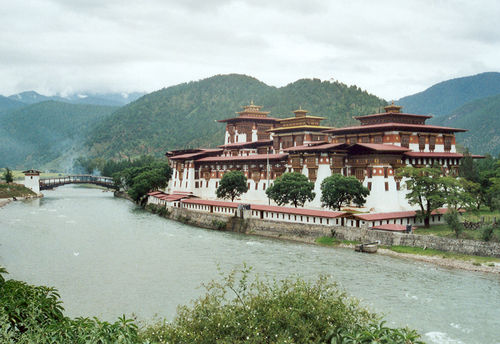 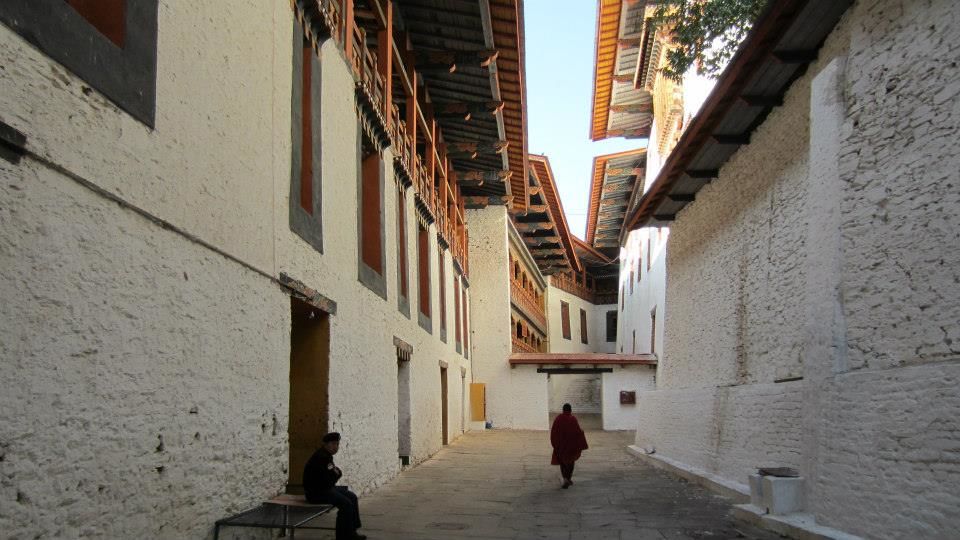 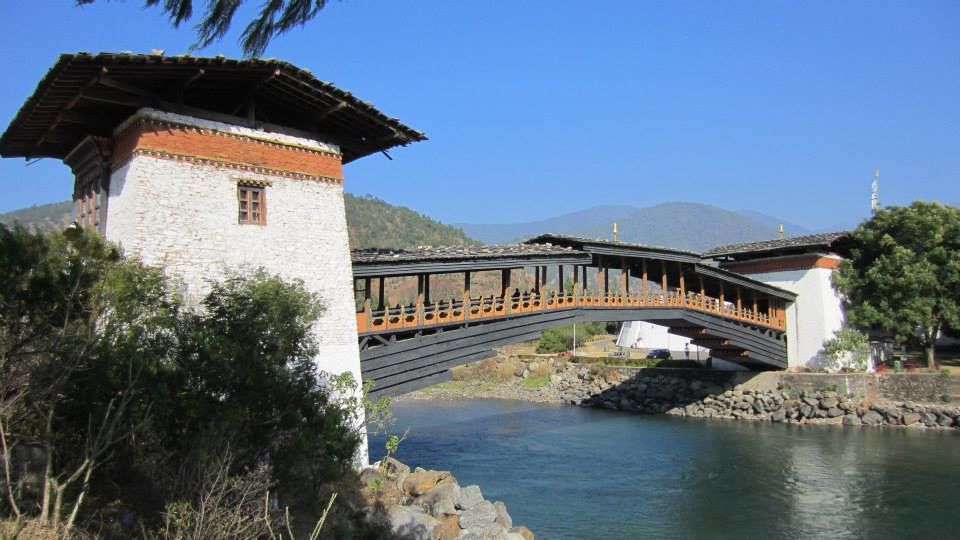 Chime Lhakhang or Monastery is a Buddhist monastery Located near Lobesa, it stands on a round hillock and was built in 1499 by the 14th Drukpa hierarch, Ngawang Choegyel, after the site was blessed by the "Divine Madman" the maverick saint Drukpa Kunley (1455–1529) who built a chorten on the site. In founding the site He is also the saint who advocated the use of phallus symbols as paintings on walls and as flying carved wooden phalluses on house tops at four corners of the eves. The monastery is the repository of the original wooden symbol of phallus that Kunley brought from Tibet. This wooden phallus is decorated with a silver handle and is used to bless people who visit the monastery on pilgrimage, particularly women seeking blessings to beget children.The tradition at the monastery is to strike pilgrims on the head with a 10 inch (25 cm) wooden phallus (erect penis). Traditionally symbols of an erect penis in Bhutan have been intended to drive away the evil eye and malicious gossip. 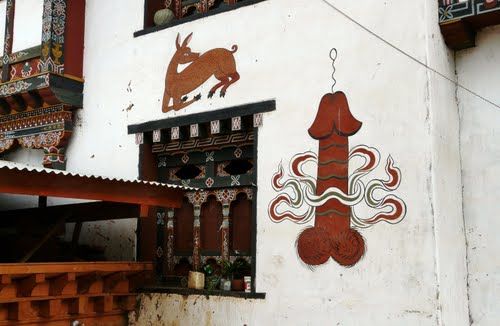 Thimphu is the most modern city in Bhutan with an abundance of restaurants, internet cafes, nightclubs and shopping centers, however it still retains its’ cultural identity and values amidst the signs of modernization. Thimphu is one of the few towns in Bhutan that have been equipped with ATM banking facilities and is a good place to stock up on some currency. One of the most curious features of Thimphu is that it is the only capital city in the world that does not use traffic lights. Instead a few major intersections have policemen standing in elaborately decorated booths (small pavilions), directing traffic with exaggerated hand motions. The juxtaposition of ancient tradition and modernity make Thimphu the ideal location to break away from the itinerary and just immerse in the lifestyle of contemporary Bhutanese 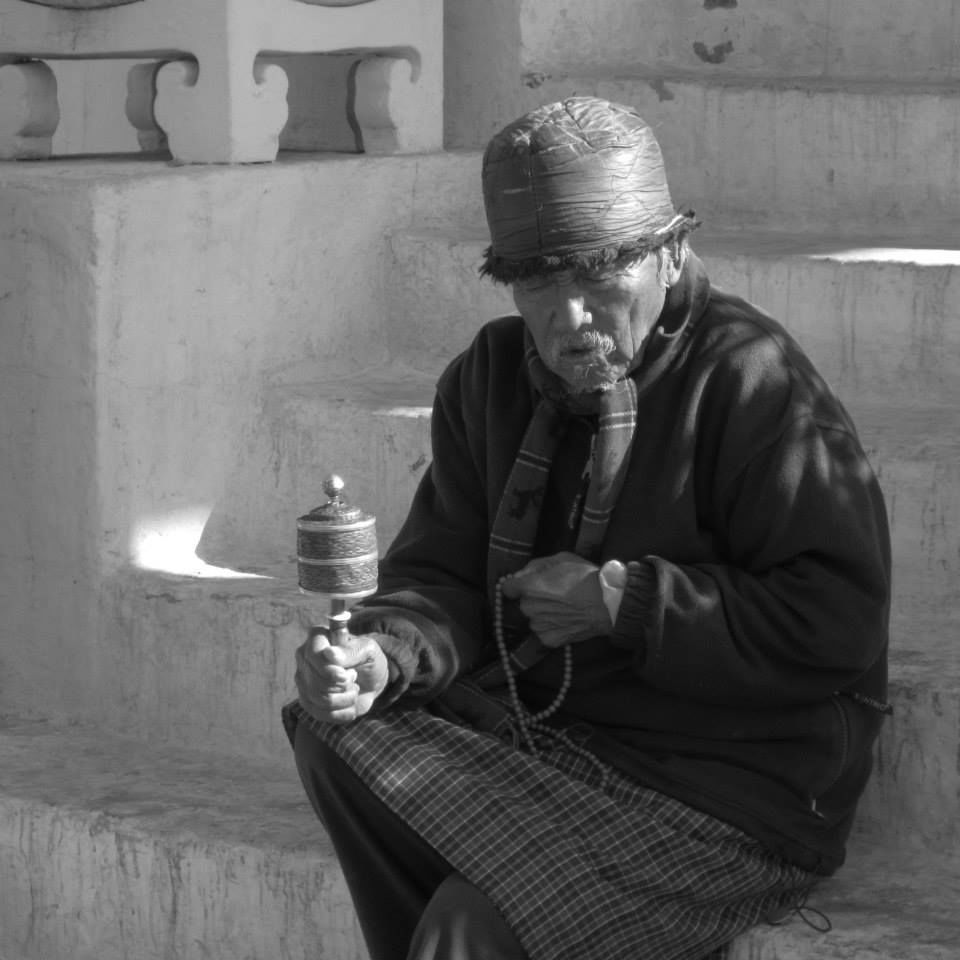 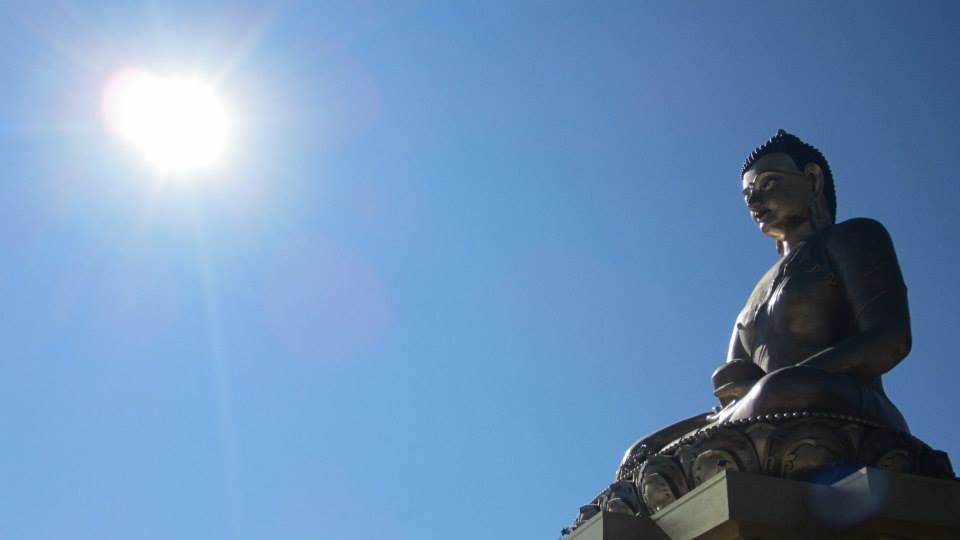 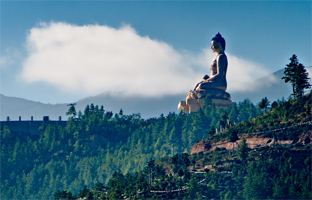 Adjoining the districts of Paro, Chhukha and Samtse, Haa valley is one of the most picturesque places in the Kingdom, spread over an area of 1706 sq. km. 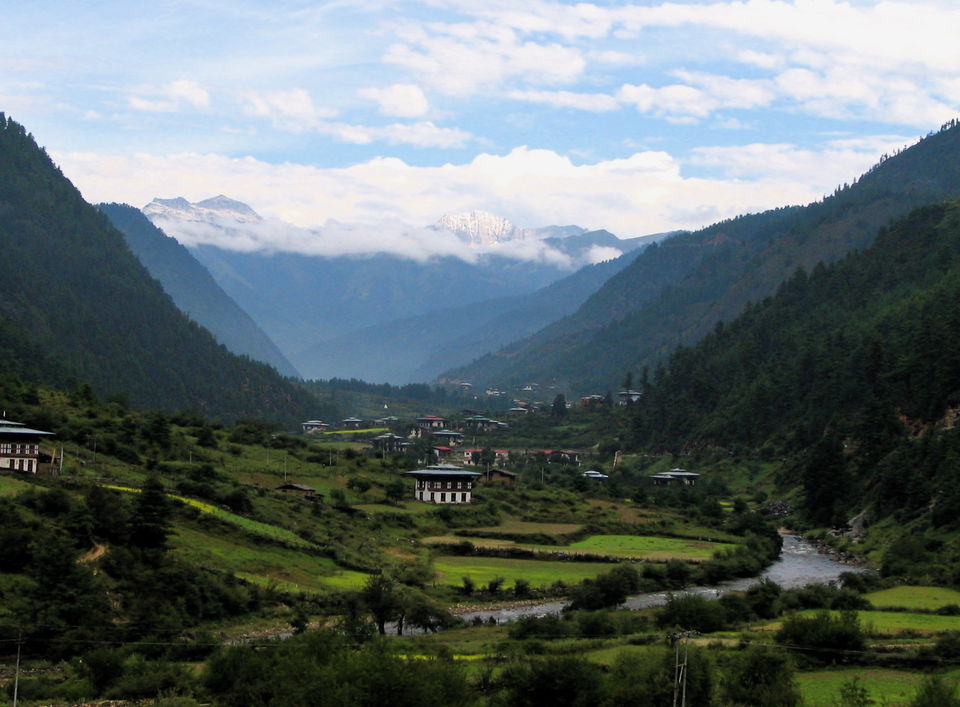 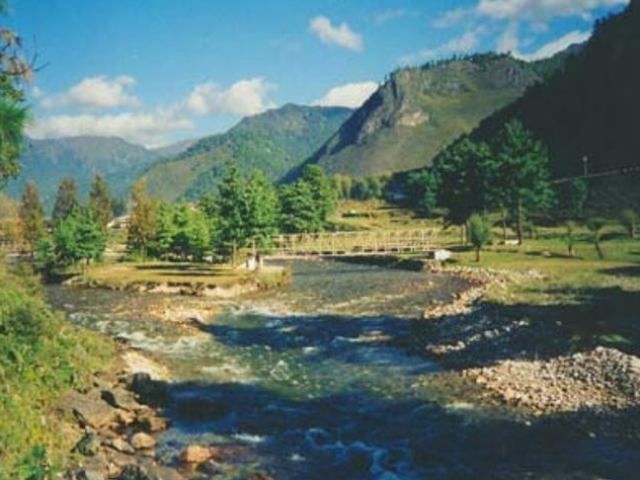 Tigers Nest - perched on the side of a cliff 900m above the Paro valley floor. It is said that Guru Rinpoche arrived here on the back of a tigress and meditated at this monastery and hence it is called "Tiger's Nest". This site has been recognized as a most sacred place and visited by Shabdrung Ngawang Namgyal in 1646 and now visited by all Bhutanese at least once in their lifetime. On 19 April, 1998, a fire severely damaged the main structure of building but now this Bhutanese jewel has been restored to its original splendor. 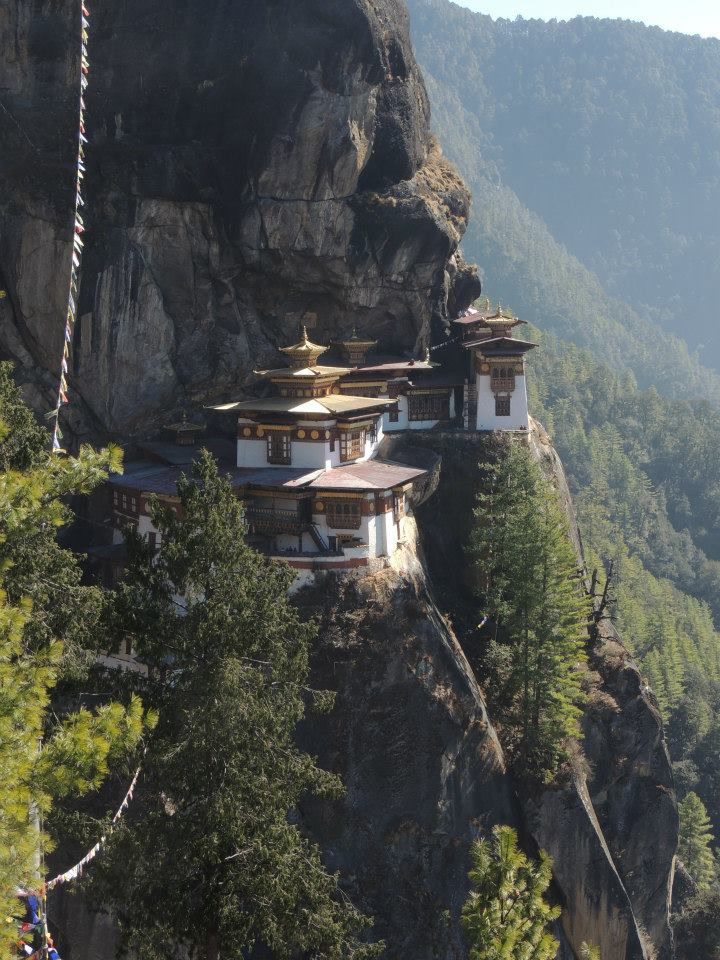 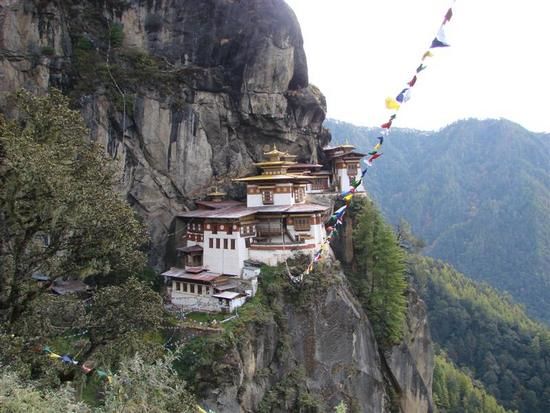 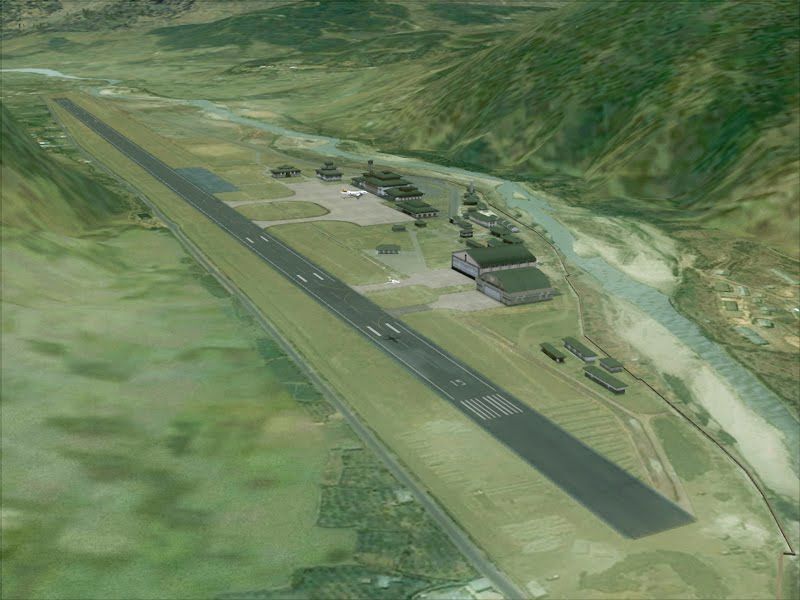