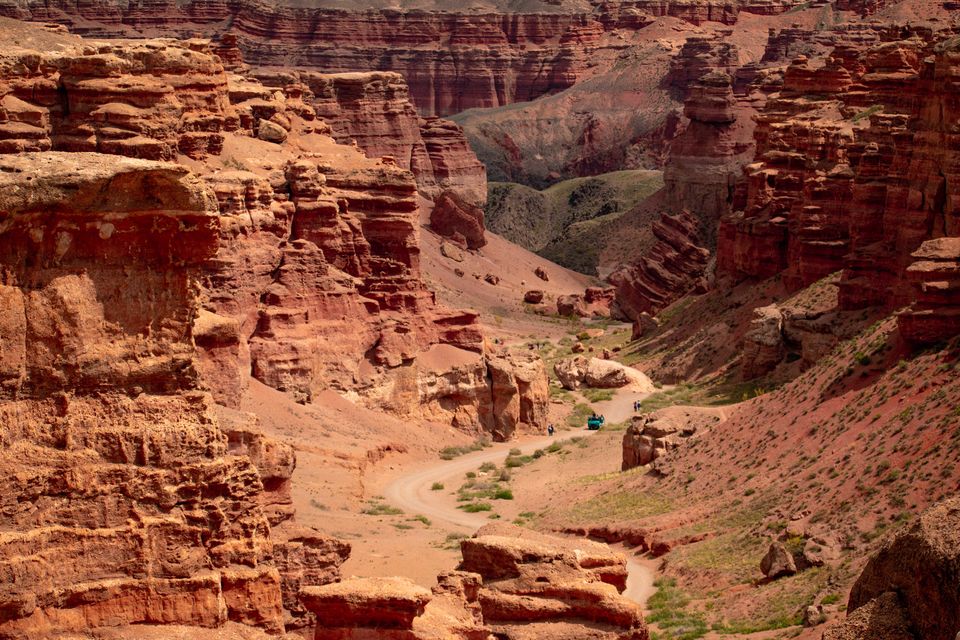 What comes in your mind when you hear the word 'Central Asia'?

The first time I heard about countries like Kazakhstan, Kyrgyzstan, Uzbekistan, and so on, all I could imagine was a barren land. Yes, I knew that these places had Genghis Khan's influence and had a beautiful architecture. But mostly, I imagined them to be wide and empty.

And more than the places, I was scared about how the people here would be. Because let's be honest, no matter how hard we try, we do form some kind of prejudiced first impression about every place or person we hear about.

And so, when I made my way here, I was surprised to find that people here are much more welcoming than other places. I was welcomed with warm smiles and people ever ready to help you.

Well, I ended up hitchhiking a lot in Central Asia and that truly changed me. It was an experience like no other and while it was scary sometimes, it proved to be great learning as well.

But in the end, all these experiences helped instill a little more faith in humanity for me. And this is what I want to share with you so that you believe in the goodness a little more and become more open to travel experiences around the world.

What happened in Central Asia?

So, we ended up riding with sheep herders, truck drivers, locals, families, travelers, and so on during our time here.

It was always fun to learn something new about the people we were travelling with. But there is one incident that made me realize that sometimes that help can come from the most unexpected of places.

So, we were heading to Altyn Emel National Park to visit the famous Singing Sand Dunes and Aktau Mountains.

Unfortunately for us, there weren't many group tours or public mode of transportation available for this place. In fact, most locals hadn't even heard about the place and were wondering why we are heading there.

So, after almost 500-600 km of hitchhiking, we came to the last stretch before the park. We had taken a lift from dairy truck drivers who were super sweet and friendly and were excited to know that we were from India.

They dropped us roadside from where we could get lift further on. However, it was already 7.00 pm and the sun was slowly setting. So, we figured that if we don't find a lift, we could simply camp here for the night.

We had to read Basshi village to get to Altyn Emel National Park so we kept on trying to get the lift. After almost an hour, a guy stopped who was going in the same direction. We told him we want to go to Basshi village so he can drop us till whatever point he was heading to.

However, we had a major language barrier at this point and since there was no network, we couldn't use the translator as well. With slight misgivings, we got in in his vehicle and he still kept trying to tell us something, quite animatedly.

We thought he might be drunk so we were on red alert. And then after 20 minutes, he suddenly stopped the truck in the middle of nowhere with an empty road being lined by tall trees on both the sides. He had taken us in the right direction, according to the map, but we were completely alone.

He got out of the truck and started calling someone which made us really suspicious. My best friend kept saying that maybe he was calling someone to kidnap us or kill us. However, I figured we had reached there anyway, it was not like we could run away now so better to hope for the best.

And then he hands me the phone and a girl starts speaking to me. She knows English and she translates what her brother has been trying to tell us for so long.

Apparently, Basshi village is not safe for females, especially at night. So, the guy didn't want us to leave so late for the place. He had offered us a room at his place where he lived with his family, wife and five kids. And so, after a short discussion, we agreed.

Still a little sceptical if the story is true, we made our way to his house. And were greeted by a really sweet woman and five little kids. He was telling the truth and he was concerned for our safety. That is the moment when my heart melted a little more and I realised that there are still some amazing souls out there who would go out of their way to ensure your safety and security.

So, we stayed the night with them, ate a delicious Potato Pasta with tea, and genuinely enjoyed the company. We all couldn't understand much but there was no denying the warm and homely feeling which we experienced at their house.

Next morning, he even dropped us back at the same point as last night so that we could continue our journey. And in the end, we were able to reach Altyn Emel National Park safely and happily.

How it changed my perspective?

Many of you might be able to relate with me and many would not. But as a female traveller, my first thought is always imagining the worst possible scenario.

That is literally the first thought in my mind every time I meet someone new. And while I might talk to them and smile, internally, I am always on guard. As a result, even if someone is trying to be just nice or helpful, I end up doubting them a lot.

However, this incident made me realise that I cannot keep that attitude forever. It made me see that this world is not as terrible as we have come to think of it, for there are still so many people who will selflessly help you. So, maybe we need less cynical people and more believers in the world.

And that's what I try to do now. I always give people the benefit of the doubt because 8/10 times, they are just trying to help and have no ulterior motive. Honestly, this has been the best thing because now I am able to trust people more easily and focus less on the negative outcomes of a situation.

What I learnt from this

While it was scary in the moment, I did learn that sometimes people can surprise you and that kindness still exists. And after hitchhiking with many groups of people, I realised that a simple smile and thank you can go a long way.

Sometimes, people are just interested in talking to you and knowing you. They don't have any ulterior motive. Also, sometimes such adventures can actually make you stumble upon people who have an interesting lifestyle or story to tell.

So, one should always be open to believing in the best of the people. Because only if you think positive and hope for the best, will you actually get it.

I can truly say that in the past couple of years, travelling has changed the way I look at the world. It has made me realise that all of us are different and it is okay. It is okay to not have your thoughts match with every single person to meet and it is okay to take a break from group travels and explore alone for a while.

Travelling is what makes me hope and believe that this world is a better place. And these experiences are just proof of what I already believe in.