All of us expect gifts on our birthday, but I am not even remotely close to my friends and family. I decided to gift myself a trip. The joy of visiting a new place. I skipped office, and went to Sivasagar, the former capital of Asom, ruled by the Ahom dynasty.

The Ahoms ruled Asom (meaning uneven land) from circa 1228–1826. They hold the record of reigning for the highest number of years ever in the history of the world. History suggests that, over the period of around 600 years, the Ahoms have frequently changed their capitals. The last known of these, is Sivasagar.

I stay close to Jorhat, a town which is 60 kms (an hour's drive) apart from my destination. People from outside Assam, should suggestively start from Jorhat as well. The availability of an airport makes communication far easier. I hired a cab, and set off early in the morning. The day was rainy (as always on my birthday); so the wind made my journey a pleasant one. I stopped for breakfast, at a restaurant in the town of Teok; and then started again.

My driver, a native of Jorhat, is well versed with the town of Sivasagar and with its surroundings. He slowed down occasionally, to show me a few places; those which were otherwise lost in the sands of time and memory. One of them was the "Namdang Stone Bridge". Built in 1703, during the reign of then Ahom king Rudra Singha, the bridge runs over the Namdang River, a tributary of the Dikhou River. The bridge was cut out from a single solid piece of rock. A paste of rice, duck eggs, black lentils and lime was used to make the bridge; no cement, bricks or mortar. The bridge is slightly curved at the top (You have to stop at that point to notice that). Interestingly, the bridge is still in use and now forms a part of the Indian National Highways. There are no signboards or landmarks to signal the presence of the bridge ahead, so please ensure that your guide shows you the spot on the way.

Finally, after another 30 minutes, we arrived at Sivasagar town. I had planned out a few destinations, so I told the cabbie to take me directly to the famous Sivadol (temple of Lord Shiva). The dome of the temple can be seen a long way from the main road, business flourishing on both sides. Upon closing in, I found that there is a large park inside which houses the temple. The park is located in an area elevated from the ground, on the banks of the Borpukhuri (meaning "A large pond"). Many others call it a tank, because it was man made, not natural. In the year 1734, Queen Ambika, wife of King Shiva Singha, built this pond, and named it after her husband. However, many historians are more inclined to believe that the tank is named after Lord Shiva. It is built on an area of approximately 130 acres. The main roads connecting the different nooks and corners of the town, form a sort of an incomplete circle, around the pond. There are provisions for boating on this pond, if requested. On the other side of the road are schools, colleges and offices. As I sat on the banks, and splashed water on my face, I felt a surge of positiveness running down me, making me holy.

Next, I went to Ronghor, the amphitheater of the Ahom kingdom. What impressed me most of the Ronghor was it's architecture as explained on the walls. It was here, where I had a chance encounter with a government officer. He was on an assignment, to check if any repair work was required in or around the premises of the monument. He spoke to me: "I can carry out activities in the garden, but how can I do anything to the monument?. It is made of materials which we are not even aware of, they can only be preserved". I shook my head in agreement but didn't say anything. In my mind however, I couldn't help but admire the people who had worked at the construction site some more than 200 years ago, with only a hammer and chisel perhaps. Their methods were raw, unproven by science, yet they believed in them, drew intricate art on the walls and produced a masterpiece that still stood tall.

Finally, I headed for Karenghar, the royal palace of the Ahoms. The palace is located, a few miles away from the town. A large garden, well maintained with trees, flowers and saplings, guarded the path for the visitors. The palace stood in front of it. I didn't take a guide, but I strongly advise that it's necessary. In certain areas inside, there are chances of someone getting frightened due to the sound of someone speaking; or someone's footsteps. This is because, the building is architecturally so designed that, in case of an emergency, voices or footsteps of the perpetrator are heard (as a sign of alarm/ danger), much before the person has actually reached the spot. If you guys are culturists, visit Sivasagar in either during Bhogali Bihu (January) or during Rongali Bihu (April). An array of traditional Assamese programs (dance and sports) would await you at the Ranghar and Karenghar; and feasting on the indigenous food would be an icing on the cake.

Other tourist attraction spots around the town include: Joysagar, Rudrasagar and Gourisagar. Each of these are artificial man made water bodies; built by the members of the royal family, in memory of their revered ones. Charaideo Maidan is another popular destination for tourists. This is the burial site for the royal members of the Ahom Dynasty. Charaideo was the first capital of the Ahom kingdom. But before planning for Charaideo, please be certain of your accommodation arrangements; because Charaideo is over 350 kms from Sivasagar town; so you guys would probably need to stop over at night.

Whenever I visit a new place, I like exploring it completely. I had to let go off the last four spots due to the paucity of time. Only then, did I realize that, one more day, and I could have completed it. There are plenty of hotels in Sivasagar, so I felt then that two days would probably been enough. Maybe next time :)

Nonetheless, it was a day very well spent. Cheers!!!

Owing to it's availability of a large number of hotels and transport services, Jorhat is a popular tourist's choice for a stopover and so was mine. Do checkout "Booking.com", "Trip Adviser", etc. for more information.

Stopped for Tea....Marks the border between the Jorhat and Sivasagar district.

Sivasagar is known, mainly because of the legacy left behind by the Ahom Kingdom. It is otherwise a very quiet and simple town. Being there I felt connected to history. 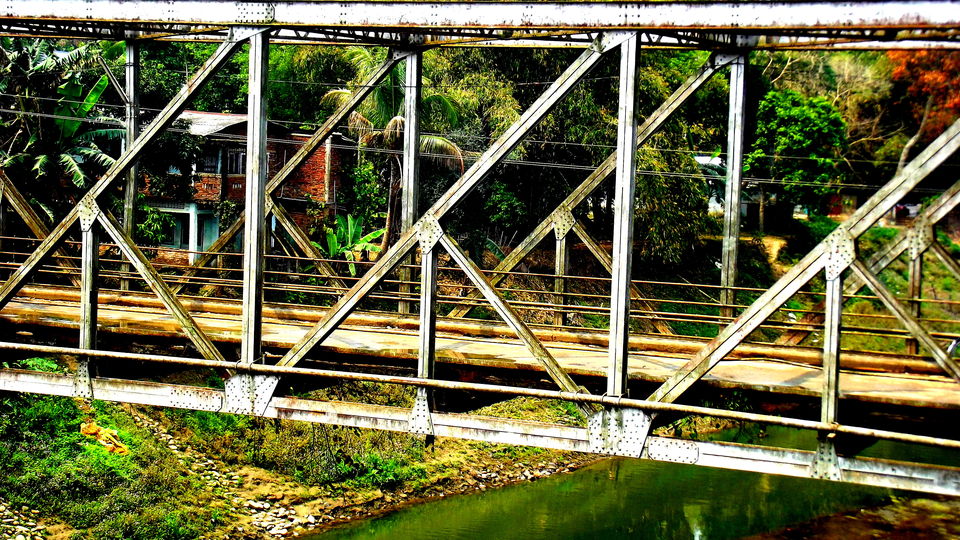 Sivadol stands in the heart of Sivasagar town. Sivadol (dol means temple in Assamese) is believed to be the tallest Shiva temple in India. Assam. The temple dome at the top, is capped with gold (called "Kolosi"). This can be seen from below. Artwork, mostly of Gods and Goddesses from Indian mythology can be seen on the walls. It was built in 1734. Sivadol is surrounded by two temples Vishnudol and Devidol which are architecturally similar to the larger Shiva temple. While Lord Vishnu is worshiped at Vishnudol, Devidol, also known as Joidol, is a temple of Ma Durga. The vicinity of these temples have been converted into a large tourist park. I saw families and school students picnicking inside the park, while others came and went offering their prayers to the almighty. 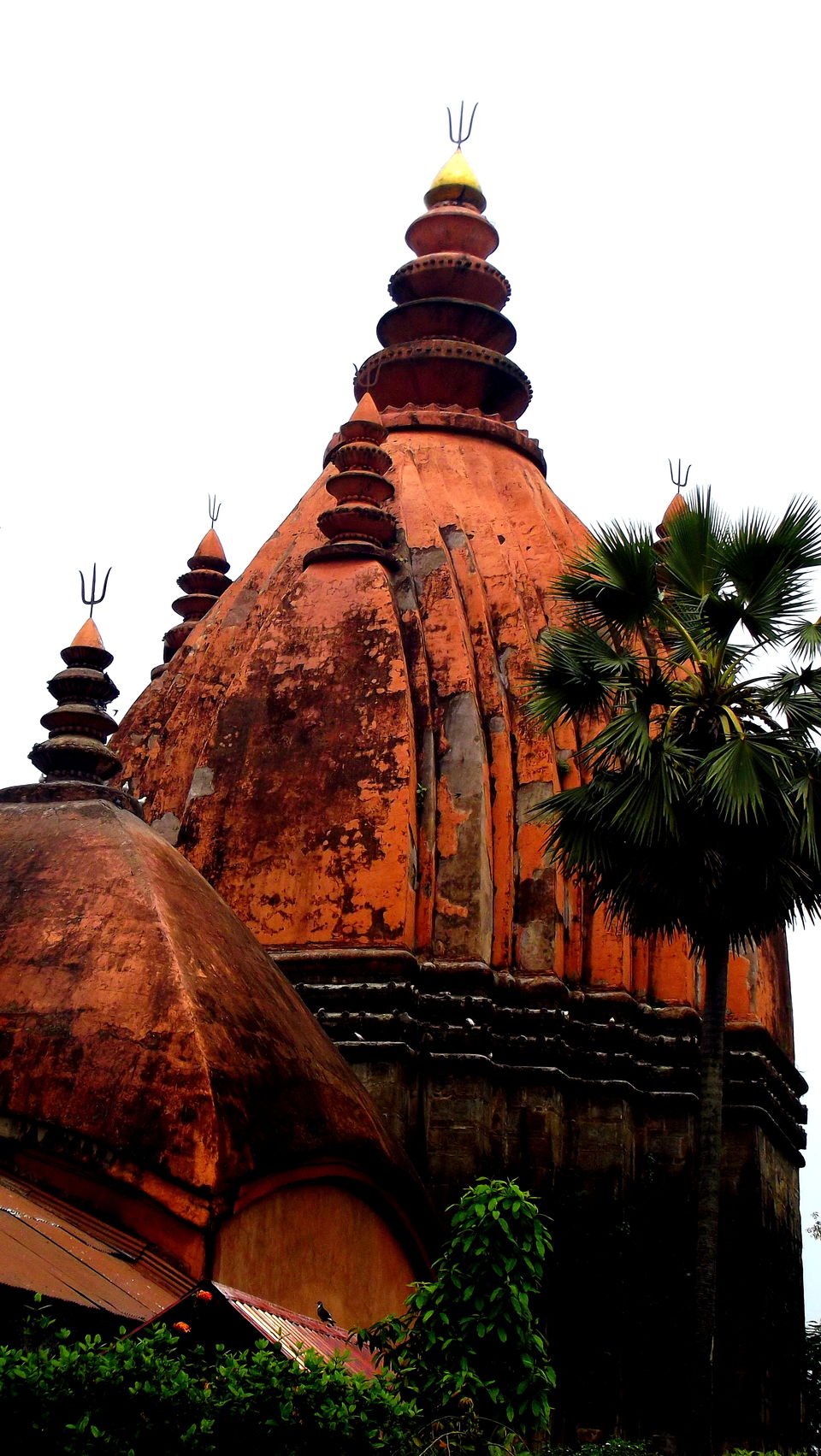 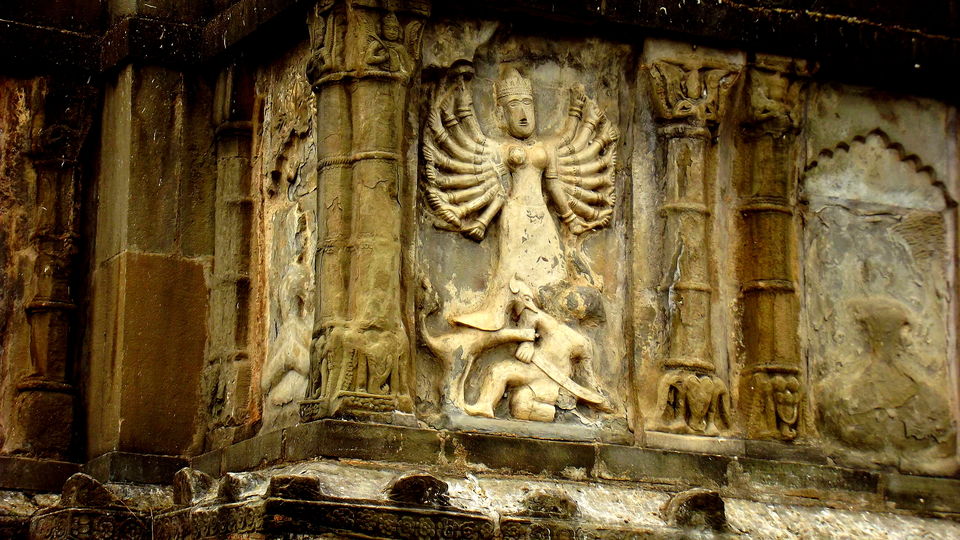 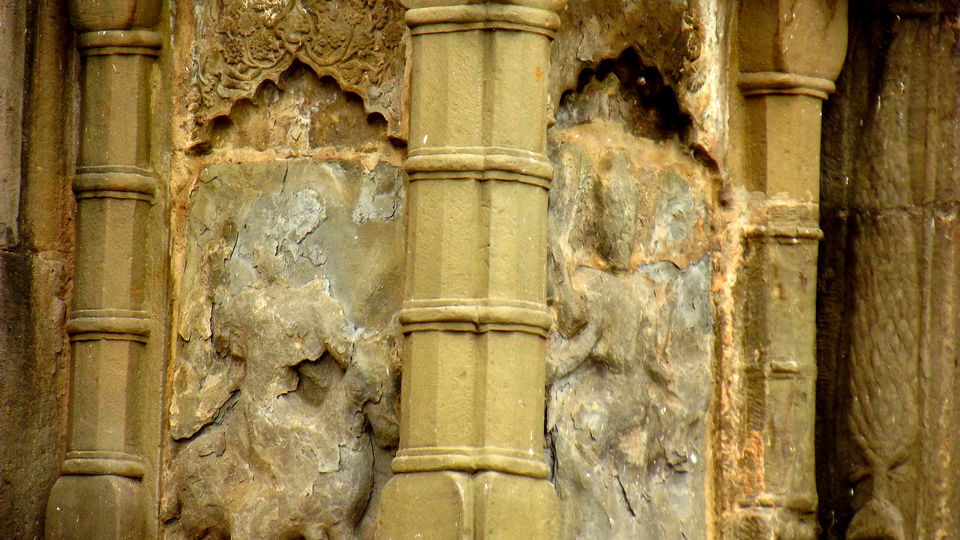 Located at the midst of the town, the area surrounding this leisure spot lushes with greenery all around. It has been converted into a park although not too many visitors (I was there at noon). It is quite close to the town, so communication is never a problem. When I looked over from the balcony, I myself felt like a king. You are promised a panoramic view of the entire town (perhaps which was previously a large barren field, where all the subjects gathered round to enjoy the sports and cultural activities). 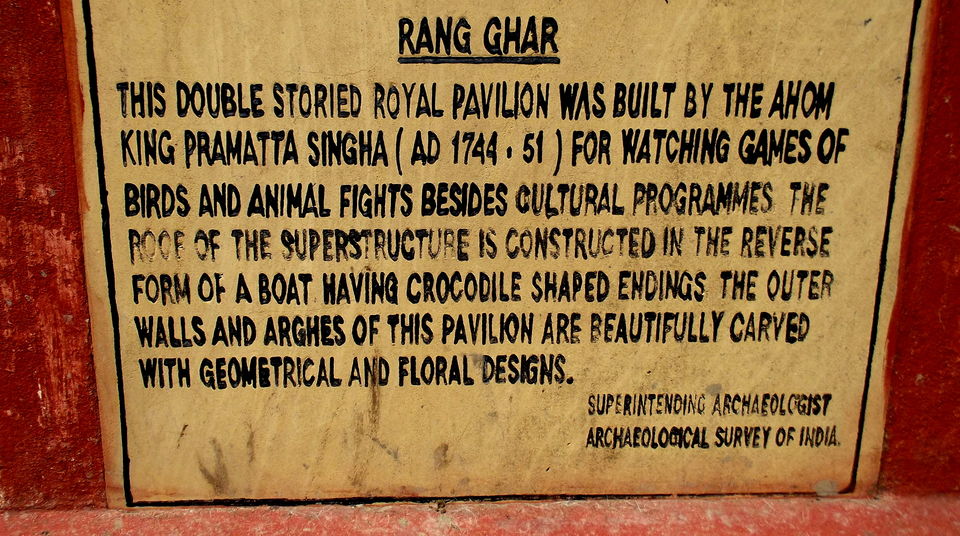 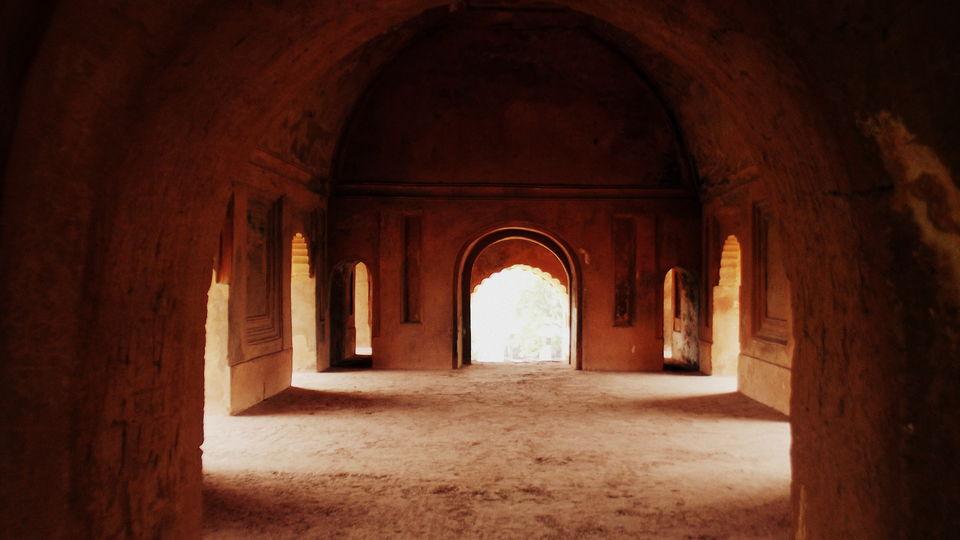 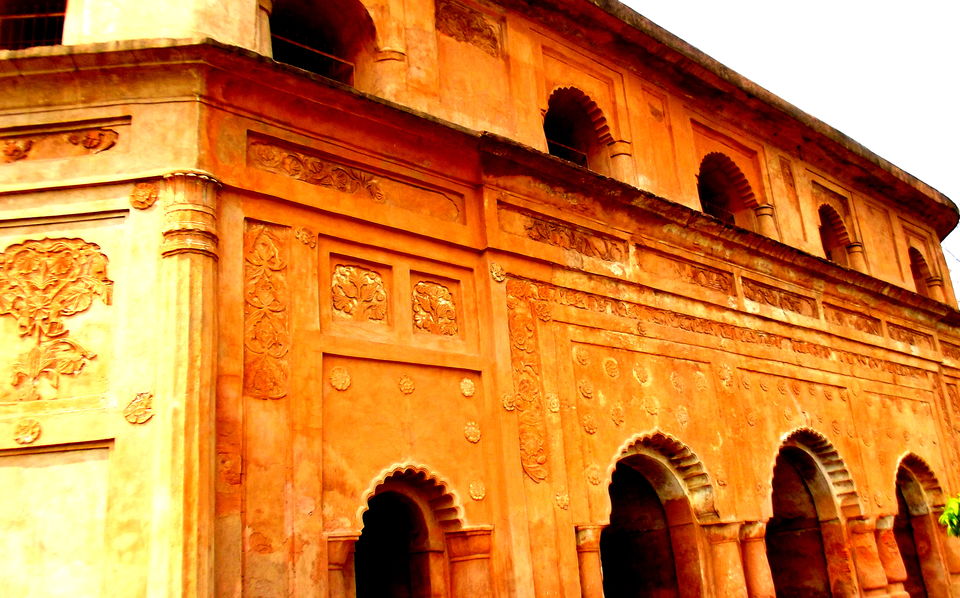 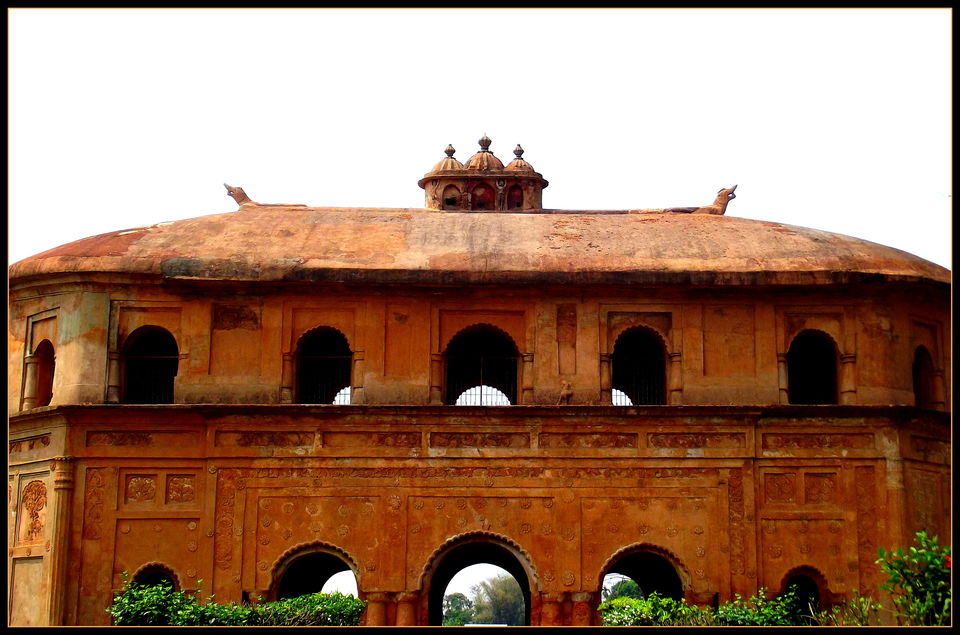 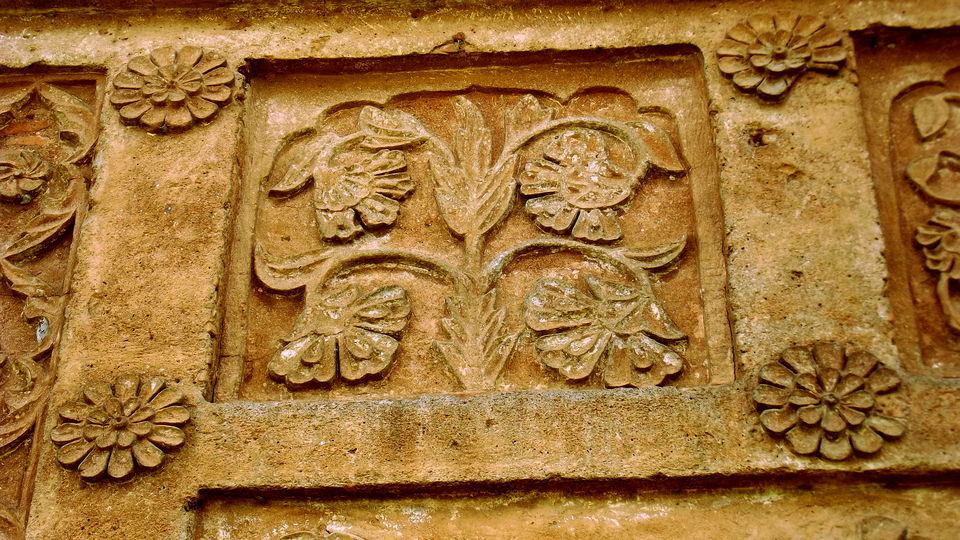 This one falls at the entrance of the town. The main purpose of the Tolatolghar (besides being a palace) was to seek refuge, should there be any threat of war/ invasion by the neighboring kingdoms. There is very less information regarding the architect of this structure. It is complex maze of secret underground stairways, hidden chambers and escape routes. Legend has it, that the complete map of this structure was passed on from the one ruling king to the next in utmost secrecy. Apart from the monarch, only a few of his trusted emissaries had complete information on the whereabouts of this place. The main palace is called "Karenghar", while its underground chambers are called "Tolatolghar". Tourists are advised to enter into the chambers in groups, so that they don't lose their way back. Carrying a torch always helps. Most of the underground chambers have been locked away (for normal visitors) on grounds of safety (Reminded me of the Adventures of Tom Sawyer). Recently, there have been reports of water logging problems in the underground chambers and cracking of the walls (checkout the photographs of the artwork). 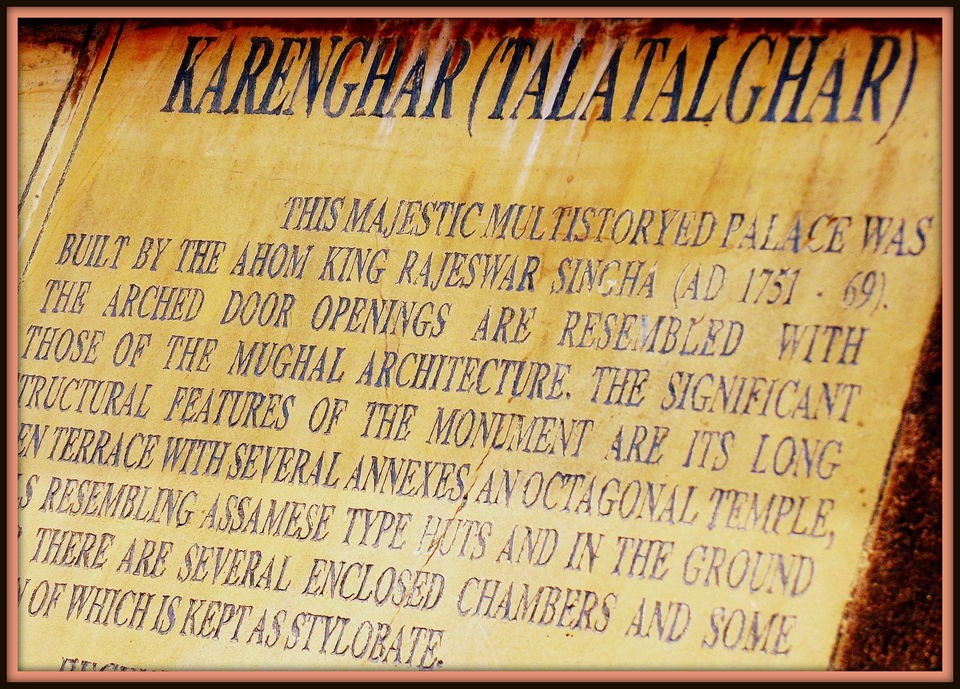 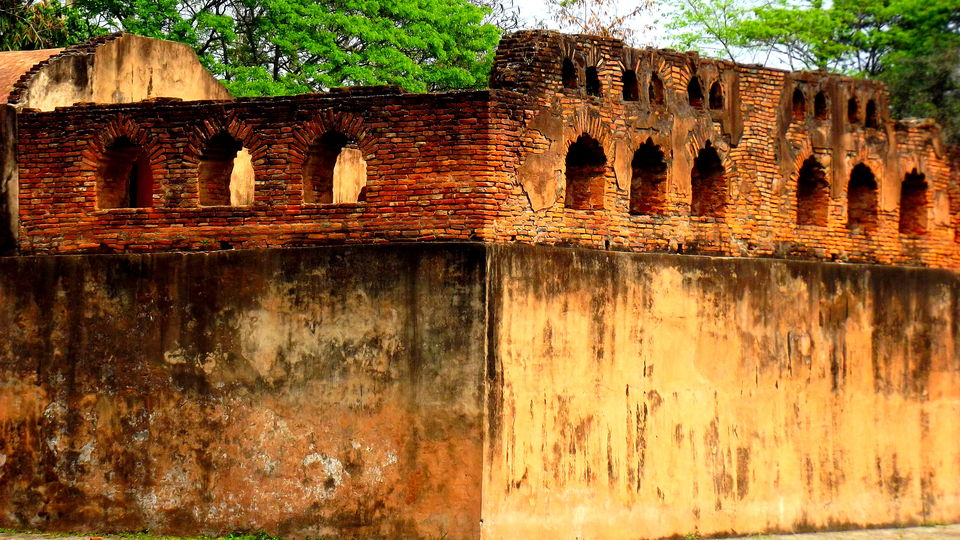 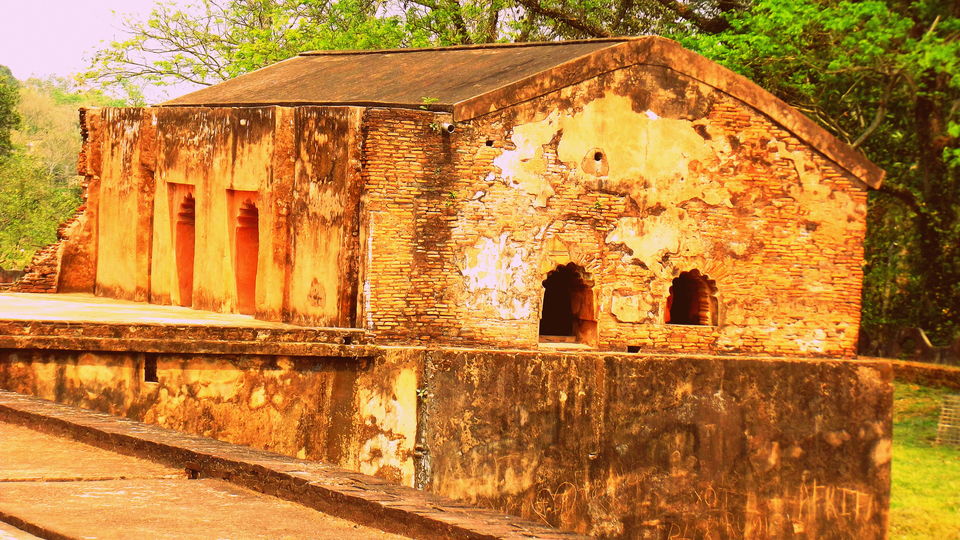 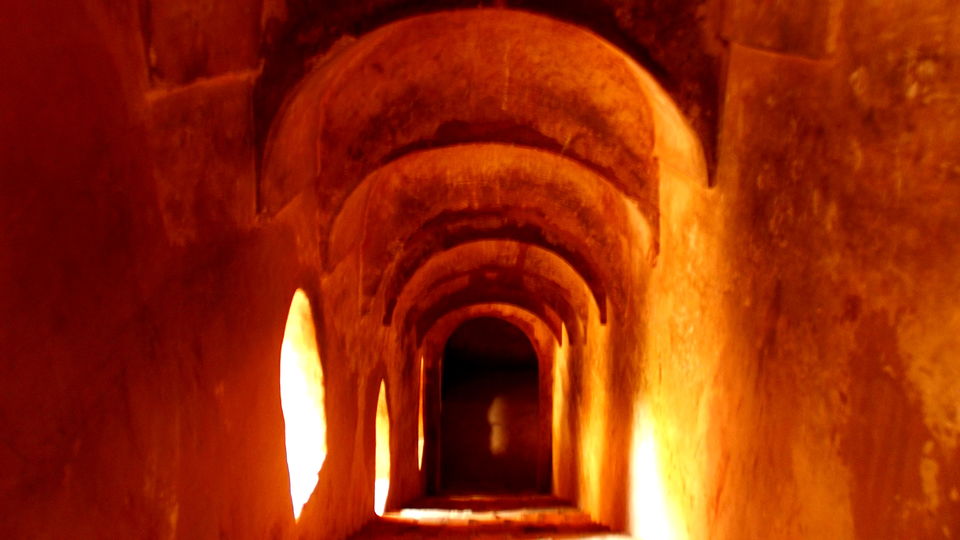 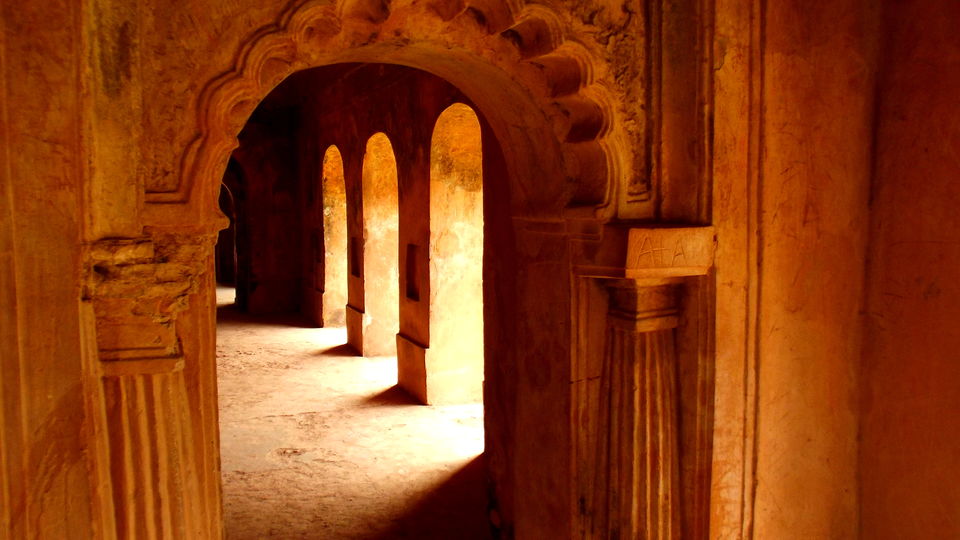 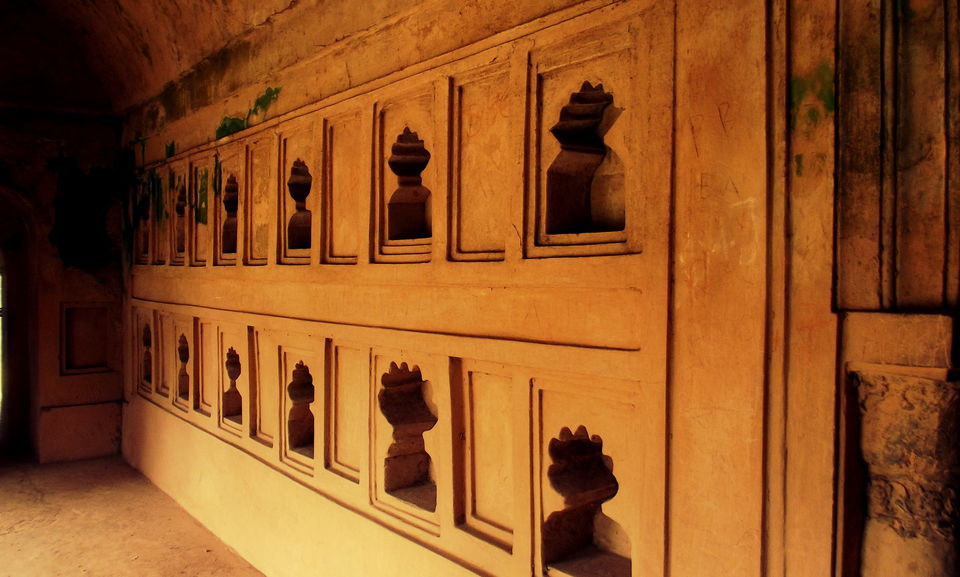 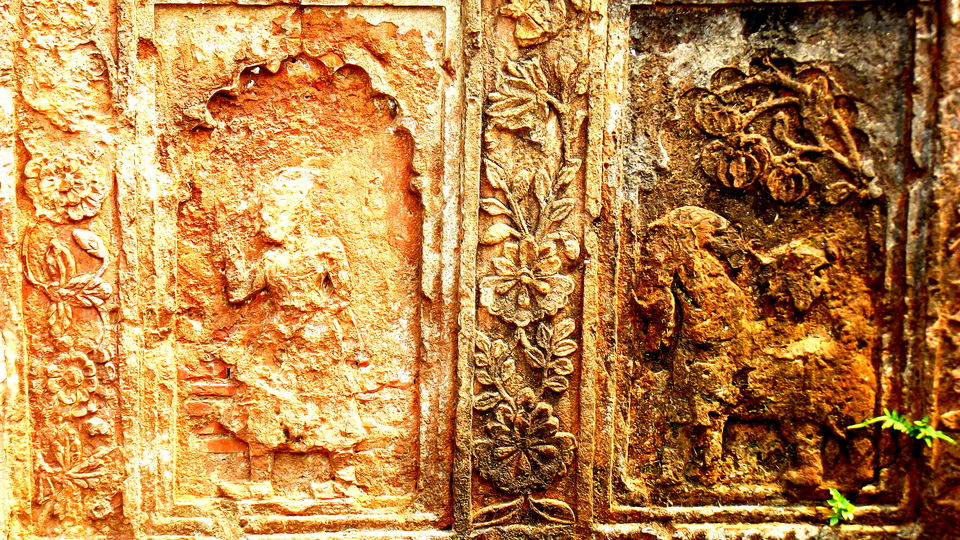 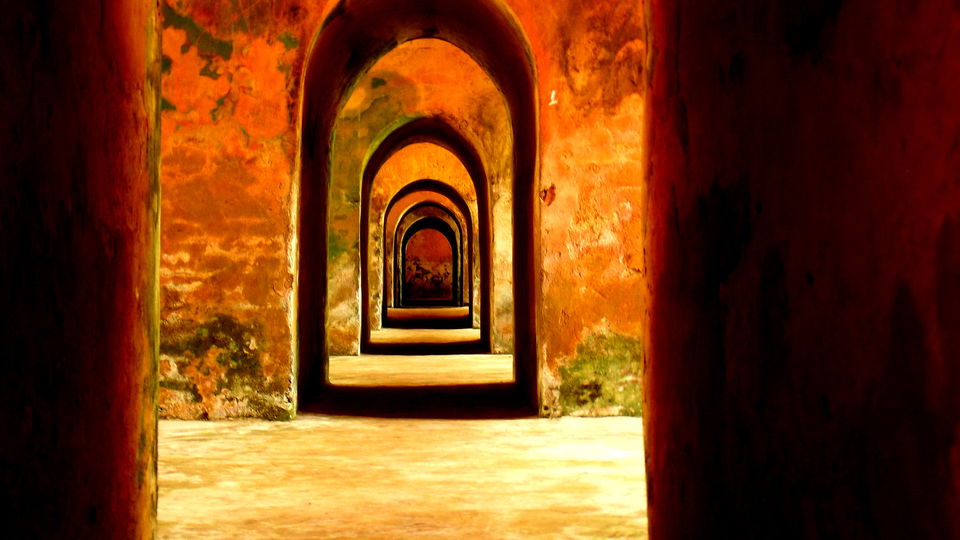 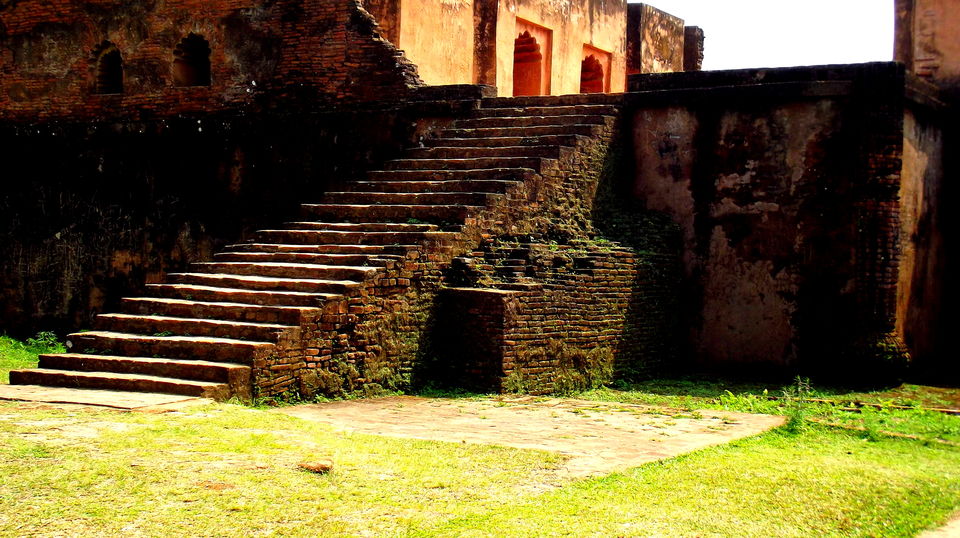