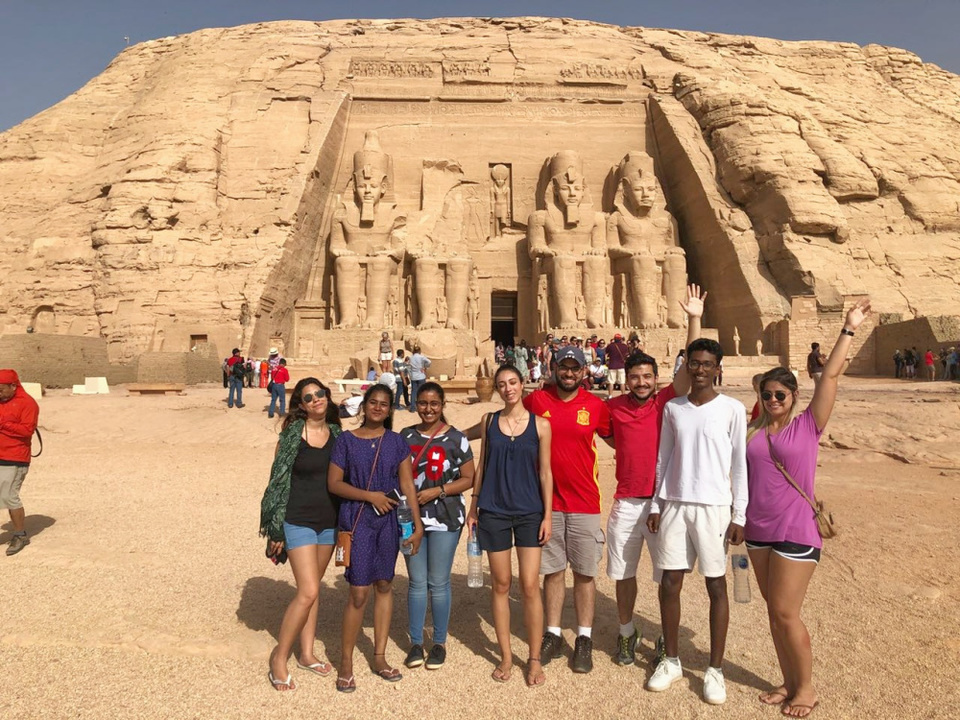 Get yourself a cup of tea or coffee, biscuits to go with it, sit down and get cozy because this is going to be one long journey all the way through Luxor to Aswan. From cruising along the Nile river, enjoying the views, visiting various temples, learning about ancient Egyptian gods, kings and their history, trying unfamiliar and strange things to eat and meeting new people, this was an incredible ride!!

Beginning in Cairo, where I met my travel group for this trip, which consisted of 5 Brazilians and 3 Indians including me, we took a train at night to arrive in the morning in Luxor.

After a 10 hour train journey, we reached Luxor station. We met up with our tour guide, who briefed us about our whole itinerary, and then we took off for our first temple.

The Karnak Temple is a spectacular and monumental example of Egyptian architecture. It is the second most visited site in Egypt after the Pyramids. The temple is massive in size and claims the title of the largest ancient religious site in the world for the amount of distance it covers, approximately 200 acres ( 1.5 km by 0.8 km). Although two to three parts of the temple are restricted to the general public, whatever remains after the destruction caused by earthquakes is still a massive area to explore.

Different elements and parts of the temple have significant contributions from over 30 pharoahs. Our guide told us that the main reason these temples were built by kings or pharoahs, was to worship their gods and goddesses, and leave their contributions towards the gods to be seen by others.

All of us in the group were dumbstruck when we learned about all the disasters that this temple had been through, and all of it still looked like magnificent pieces of art. Quite a lot of the floor area in the temple had to be restored for tourists to be able to walk and see the site.

One can only imagine how extremely difficult it must have been to build these temples taking into account that they did not have the kind of equipment and machinery we possess in the 21rst century.

We moved on to the last spot at the temple, the Scarab statue. The Scarab(dung beetle) is a sacred figure in ancient Egypt. It represents the shape of the sun during sunrise and birth of a new morning. It is believed to have powers to grant you a wish if you walk around it 7 times. I did wish for something, let's see if it comes true!!

Next stop, Luxor Temple, also situated on the east bank of the Nile River is another masterpiece built by the Egyptians. When this temple was discovered, it was buried halfway in sand.

The entrance has 4 statues of Ramses II at different stages of his life. Both Karnak and Luxor temples are related to each other with a lot historic events connecting them.

It was interesting seeing the shrines inside the temples and learning their purpose.

Two temples were enough for the day. We were tired in the scorching heat. It was time to head to our cruise and relax for the rest of our day.

The cruise was delightful!!! The food? Exquisite!! And the people? Really friendly!!In the evening we decided to chill and relax on the sun deck. We talked with each other and learned a lot from our guide. One of the Brazilians from my group, apparently had been to India. She told us so many things, that me and the other 2 indians started feeling she was more Indian than the 3 of us combined!! She had visited India for job purposes and also learned English in India.

VALLEY OF THE KINGS

Our second day started with a visit to the Valley of the Kings. This valley is situated on the west bank of the Nile river where, for a period of nearly 500 years from the 16th to 11th century BC, rock cut tombs were excavated for thePharoahs and powerful nobles of theNew Kingdom(18th to the 20th Dynasties of Ancient Egypt).

The valley is known to contain 63 tombs and chambers (ranging in size fromKV54, a simple pit, toKV5, a complex tomb with over 120 chambers).

Most of the tombs and the chambers don't contain the mummies of the kings. They are preserved in the Egyptian Museum of Cairo. The only tomb to actually contain and still have the mummy inside it in the valley is Tutankhamun's tomb.

After seeing few of the tombs we went to a nearby place which makes Alabaster stone cups, jars, vase, plates, sculptures and a lot of other things which can be bought as souvenirs or daily usage in a local house.

Alabaster stone is also called moonlight stone for it's translucent property and ability to refract light.

The last stop of the day was Hatshepsut temple,it is located beneath the cliffs atDeirel Bahari, on the west bank of theNilenear theValley of the Kings.

The site itself was beautiful to see but the heat in the area was too much. It was a scorching 48°C afternoon.

Thetemple is dedicated to the sundeity Amun and is situated next to the mortuary temple ofMentuhotep II which served both as an inspiration, and later, a quarry. It is considered one of the "incomparable monuments of ancient Egypt.

Temple visits for the day were done and we headed back to the cruise. Moving on in the Nile we crossed Esna lock, a bridge which has the exact go through width for a cruise. Two cruises will not be able to cross this bridge at once.

Another interesting thing we came across the Nile river were local Egyptians trying to sell their goods to us from small boats. They tag themselves along with us as we keep cruising and bargain prices for their products. It was very amazing to see these people be able to speak in English, Spanish, and Dutch. They were able to interact with many tourists on the cruise. They kept throwing towels to us on the sun deck and expected us to put money back in it and throw it to them. It felt like a fun game of catch catch, but in the end no one bought it, because they were demanding too high of a price. Here's a video showing exactly what I just explained.

The third day we reached our tour guides home town, Kom Ombo. The Kom Ombo temple is one of a kind, double temple, for two gods, Sobek(the crocodile god) and Horus(the Falcon god).

The complex mainly consists of two parallel temples with all the traditional components of an ancient Egyptian temple such as religious structures, statues, carving,etc.

Colours are protected from natural elements and erosion.

Right next to the temple is the Nilometer.A nilometer was a structure for measuring theNileRiver's clarity and water level during theannual flood season.If the water level was low, there would be famine. If it was too high, it would be destructive. There was a specific mark that indicated how high the flood should be if the fields were to get good soil.

On the fourth day we finally reached Aswan. From Aswan we take a mini-bus south towards Abu Simbel to visit the famous temple.

The Abu Simbel temples are two massive rocktemples at Abu Simbel.The twin temples were originally carved out of the mountainside in the 13th century BC.The complex wasrelocated in its entirety in 1968, on an artificial hill made from a domed structure.The relocation of the temples was necessary or they would have been submerged during the creation of Lake Nasser, the massive artificial water reservoir formed after the building of the Aswan High Dam on theNile River. It took approximately 8 years to shift both the temples.

The two temples are called, "The Great temple of Rameses II" and "Temple of Nefartari". The temple of Nefartari is the only temple in all of Egypt that has the queen's statues at the same size as the king's statue. Rameses did this to show his love towards Nefartari, a Nubian girl, and it also helped him to convince the Nubian people that he wanted to support and help them.

We moved on to the our next stop for the day from the temples, The Aswan Dam, or more specifically since the 1960s, the Aswan High Dam. It is an embankment dam built across the Nile in Aswan, Egypt, between 1960 and 1970. The Aswan Dam on the Nile River stops up one of the largest rivers in the world, creating a huge reservoir, Lake Nasser.

The last stop for the day as well as this trip was a Nubian village. The housing style, architecture and colour used to paint were really different and unique to see.

Different kinds of Spices in the village market.

Their food was really delicious and filling. After eating it was time to see what Nubian villages were famous for. The crocodiles!!!!!

I saved the best for the last. This animal is probably the closest species similar to the dinosaurs, that we still have left on our earth. Nubian people keep crocodiles in their houses to to keep away evil. They worship the crocodiles god 'Sobek'. This creature is definitely by far the most amazing one that I've come in contact with, and been able to observe.

After all the extravagant things that I got to do for the 3 days, only one thing remained on the list. A swim in the Nile River.

Our guide took us on a motorboat to a place which was safe to swim and we enjoyed and relaxed in the water for some time.We head back to our cruise packed our stuff, said goodbye to the crew members and left.

Hope you enjoyed the this virtual ride with me and the group. Until next time, wadaeaan!!!