The first time I heard of the Chilean poet was during a community college Spanish class. This was the beginning of my third year of Spanish, and at 17 years old, fluency seemed like an impossible feat. Our professor would give us regular handouts of songs, articles, and stories in what was most likely second grade level. But this time was different.Pablo Neruda’s poetry was palpable, seductive, and straightforward. He elegantly wove the simplest of words, like “red” or “chair”, and brought me into that moment of his life. He was like a young Hemingway, but more emotive, and less drunk.

Fast-forward to age 23. I had been living in Argentina for about four months, and I was itching to see Chile. This was the land where the controversial poet and politician grew up, lived, was expatriated due to his strong Communist views, and eventually returned for the remaining years of his life. This would be myfirst trip alone- on an all night bus, spanning the width of Argentina and crossing the Andes into Santiago, right before President Bush was reelected. I was wary about the trip, but much more than that, I was excited to see a country I’d been reading about for years.

Pablo Neruda had three houses in Chile- one in Santiago, one in Valparaiso, and one in Isla Negra. All were open to the public, and I was determined to see all three. The first night I got to Santiago, I met a group of people from Germany, Brazil, and Australia, and instantly had traveling partners. I babbled excitedly about Neruda, going to see where he lived, his writing spaces, and the landscapes that inspired him. No one had heard of him, which surprised me, but they were on board.

The first couple of days, we explored the capital city of Santiago, getting a feel for the climate, the curious Chilean accent, and the stray dogs that seemed to be everywhere. The rest of the trip, we would be chasing Pablo. 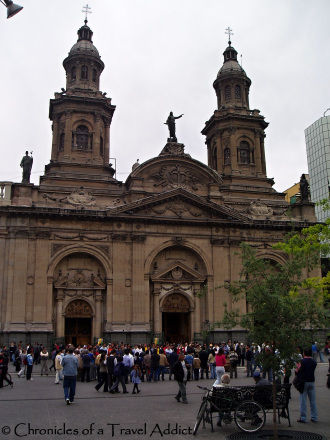 We set out by bus to Valparaiso, an entrancing coastal town of hills, colorful houses, incredible seafood, and many more dogs roaming the streets. Riding in, it reminded me a lot of San Francisco- just like Argentina had reminded me of New York at first. I suppose we try to become acquainted with places, and people, by relating them to what we already know. La Sebastiana is a multi-level, patchwork-colored house on the top of Cerro Bellavista. The entrance has been turned into a quaint museum with various photographs, newspaper clippings, and books of Neruda’s. The rest of the house is structured with hardwood moldings, frames, and walls. A variety of paintings accent the white walls, and rather dull stained glass is stuck upon the ceiling. Moving up the narrow stairs, there is a mural on the left- a map of Patagonia and Antarctica, composed entirely of pebbles. Ascending even farther, still life paintings hang clustered together on the green walls, and portholes replace regular windows. The top level of the house is by far the most fascinating, since it was where Pablo Neruda wrote. If my memory serves me well, his desk and typewriter are still in place, as well as a couple of model ships here and there. This room is arguably the best place to view the city of Valparaiso. The rolling hills, dotted with colorful houses, lush greenery, and the Pacific Ocean are striking, magnificent. 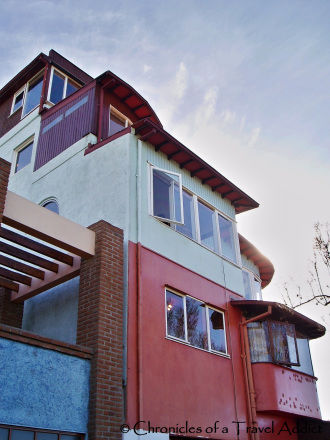 An hour and a half south of Valparaiso, in the region of El Quisco, is Neruda’s most famous house. After naming it “Isla Negra”, the entire town became known as such, and has over the years developed as a haven for other writers and artists. It is a very small region, and people usually visit for the sole purpose of seeing Neruda’s house. I was no exception. Set upon the beach, Isla Negra is an elaborately decorated, ship-themed home. Pablo Neruda and his wife, Matilde Urrutia, are both buried on the grounds. It was here that I learned that, although the poet was obsessed with the ocean and naval structures, he was deathly afraid of the water and never set foot on a ship. An intriguing paradox, for sure. The expanse of the structure is open for viewing, and contains the majority of Neruda’s belongings, including a plethora of knickknacks. It seems that Isla Negra was a place where Pablo Neruda could indulge in his boyish obsessions, meditate on the waves crashing against the black rock, and create some of his most renowned poetry.

Unfortunately, not all stories have fairytale endings. By the time I got back to Santiago, I was still eager to see more of Neruda’s dwellings. The more I learned, the more I wanted to see; my curiosity was insatiable. However, I only had one day left to explore, and I would leave Chile on Tuesday morning to see Mendoza, Argentina. While researching on the hostel’s lone computer, I discovered this: La Chascona was closed on Mondays. My fate was sealed. I had frolicked all over Central Chile, trying to follow Neruda’s path and understand the writer’s mindset as best as I could. But the reality was that I would have to leave the country without seeing all three of Pablo’s residences. It crushed me. Ten years later, the desire to see La Chascona remains. I suppose you could say that, nearly ten years later, I am still chasing Pablo. 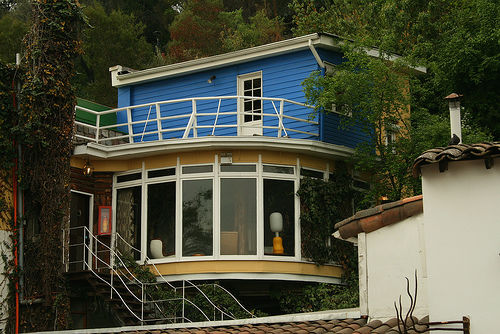