Walk, walk and walk.. I walked almost the entire day around the dubai mall (the walking was actually only to kill time, so that my appointment for the burj Khalifa finally falls in) and as the clock struck 4'o clock, up to the world I went..

Finished a minor security check at the beginning, entered in and glanced at the beautiful writings on the walls.. While I was going up through the escalator, suddenly I saw the most beautiful writing over there, as soon as i saw it I was sure I wanted a picture with it..but then I was on the escalator going up.. The first thought was, "I'll get it when I come back" and then second thought was "what if the exit is from some other way" within no time I rushed in the opposite direction, and a jump! Safe landing 😉 (I'll upload that pic, "the precious one")

Again on the escalator, went up.. The path was not crowded as I had expected it to be but was very interesting.. They have so much to tell you, about the heart, mind and hands of everyone behind the burj Khalifa..

Was guided towards the famous "one -minute" lift.. I dont know if its called that, but I had heard that the elevator there takes you to the top within a minute!!

Stepped in, and a black out..wow!! A nice Arabic tune is on!! And zoom it goes up giving you a feel as if its a plane taking off!! As promised within a minute I was at the top! 124th floor!!! God,  I didnt know I could achieve such Heights in life 😜.. Two beautiful ladies greet you and show you the way to the balcony.. I rushed out..

Yes, that was me.. Completely speechless.. The view from the top is incredible!! You get to see the world from a totally different dimension altogether!! Marvellous!!

A small world was there, people from various parts of the world had come to see this! I borrowed a selfie stick from a Chinese man, snap, snap, a few pics!!

About the view I dont know what to say!! One must experience it to feel it.. No words will ever describe that feeling!!

"the precious one" From the earth to the sky! 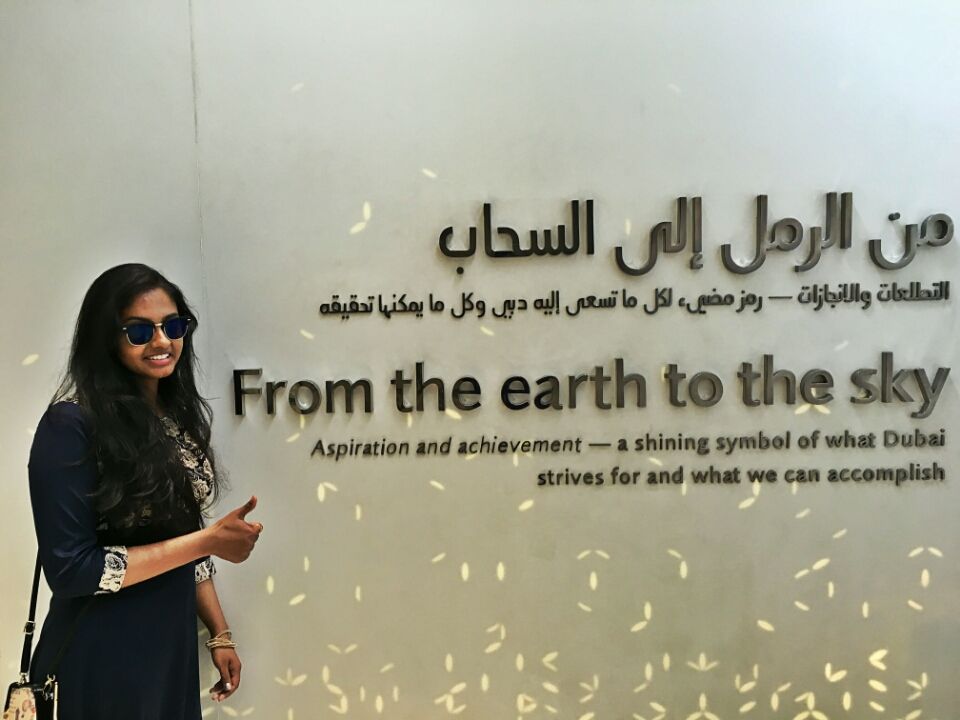