Rome in a Single Day - A Full day tour

The Colosseum and the best of Rome (City Centre, Pantheon, Navona Square)

Walk into the shoes of the famous gladiators, Commodus and Spartacus, and prominent leaders, Julius Caesar and Augustus, in this first 3 hour skip the line tour.

Place yourself in the centre of a large arena with over 60,000 chanting spectators ready to watch you in all your glory – welcome to the Colosseum. This iconic symbol of Imperial Rome was used for gladiatorial contests and public spectacles such as mock sea battles, animal hunts, executions, re-enactments of famous battles, and dramas based on classical mythology. Built nearly 2,000 years ago, the Colosseum is one of the must-sees in the city, and Once in Rome is determined to reveal the last remaining secrets of this monumental piece of architecture, one of the New 7 Wonders of the World.

After reliving the accounts of a gladiator, walk among great rulers as you make your way to the Roman Forum.  Julius Caesar, Augustus and Marc Anthony are only a taste of many famous people who stood at this ground.  Visit the Senate House, the place where Julius Caesar’s ashes were buried, and where Marc Anthony held his renowned speech directed to “Friends, Romans, Countrymen”, calling out the assassins of Caesar.

Next, you will walk along the Imperial Fora, a series of public squares constructed between 46 B.C. and 113 A.D, getting to Venice Square that still celebrates the Unification of Italy with its imposing national monument, the Vittoriano. In the same square you will recognize the famous balcony from which Mussolini spoke to his people before and during the Second World War. Continuing, you will discover that the current city was built on the ruins of the ancient one. With you local guide you will stop in Torre di Largo Argentina to meditate on the place where Julius Caesar was assassinated.

From here move to Piazza della Rotonda  where you will find in front of you one of the most beautiful and best preserved building from ancient times, the Pantheon. It’s story begins nearly 2000 years ago when Agrippa, faithful friend of Augustus had a temple which was dedicated to all gods in the heaven. In those days it looked very different. It was Hadrian who rebuilt the Pantheon as you see it now. Near by this huge structure there is one of the most famous Gelaterias and Café, so what better way to enjoy an ice cream or a lovely espresso! Finish the tour in Navona Square, one of the most elegant squares in the world, the symbol of the roman baroque. See what a strange, long, narrow shape it is. Well, the square traces the same lines of the ancient stadium built by the emperor Domitian. So the buildings you can admire along its sides have their foundations on top of the spectators’ steps around the stadium and the surface of the square itself on top of the arena where romans held the athletics games.

The Vatican Museums with Sistine Chapel and St. Peter’s Basilica

A visit to a museum is also an adventure and a game. This is a special tour with curiosities, legends and games. You will discover many things while having fun, such as that when you enter the Vatican Museums, you’re entering the Vatican City State. It’s the smallest but probably the most famous city state in the world. In centuries gone by, the popes governed a state which was spread over a much wider area, but it ceased to exist in 1870 when italian troops entered Rome. Like all independent states the Vatican City has its own coins, stamps, radio station, but it also has its own laws, together with police force and law court to enforce them. The Head of the state is the Pope, at the moment Francesco I, who is chosen from among cardinals the world over. The personal guards of the Pope are the famous Swiss Guards, you will see them in front of the main entrances of the Vatican. The private collection of the pope is packed of artworks: ancient statues from Egypt, Greece and Rome, sarcophaguses, busts, frescoes and tapestries, but also painting made in any period of the history. Thanks to his collection historians could write the history of humanity. You mustn’t miss the Sistine Chapel which was frescoed by Michelangelo. Follow your tour guide into St Peter’s basilica. This church is rich in works of art and monuments. Here are some of them that you can’t miss: the Canopy by Bernini, the bronze statue of St. Peter, the Pietà by Michelangelo. Leave the church and look at the center where there is the obelisk brought from Egypt. At the end turn around St Peter Square to enjoy the magnificent colonnade by Bernini, it seems almost to wrap you in an embrace.

The Colosseum or Coliseum, also known as the Flavian Amphitheatre is an elliptical amphitheatre in the centre of the city of Rome, Italy.

The Imperial Fora are a series of monumental fora, constructed in Rome over a period of one and a half centuries, between 46 BC and 113 AD. The forums were the center of the Roman Republic and of the Roman Empire. Wikipedia

The Arch of Constantine is a triumphal arch in Rome, situated between the Colosseum and the Palatine Hill. It was erected by the Roman Senate to commemorate Constantine I's victory over Maxentius at the Battle of Milvian Bridge on October 28, 312. Wikipedia

Undeniably the most elegant and cheerful of all Roman piazzas, it was built on the site of Stadium of Domitian in the 1st Century A.D. and still preserves its outline. The piazza remains a highly popular meeting place for Romans and tourists alike, who drowsily soak up the sun and atmosphere in open air bars dotted around it. Used in ancient times for various athletic games and competitions, although it never witnessed the carnage offered in the Colosseum, today tourists often enjoy sitting for street artists who, on request, in a few minutes either sketch a faithful portrait or draw a caricature of their models.

The Pantheon in Rome is the Roman monument with the greatest number of records: the best preserved, with the biggest brick dome in the history of architecture and is considered the forerunner of all modern places of worship. It is the most copied and imitated of all ancient works.

The Sistine Chapel is a large and renowned chapel in the Apostolic Palace, the official residence of the Pope in the Vatican City. Wikipedia

The Vatican Museums are the museums of the Vatican City and are located within the city's boundaries. Wikipedia 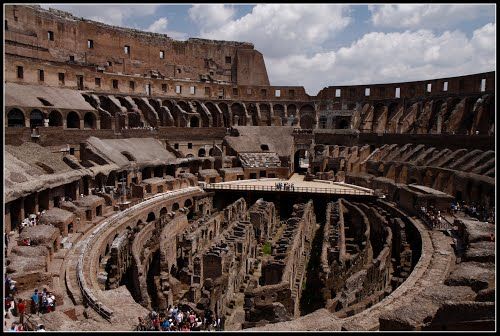 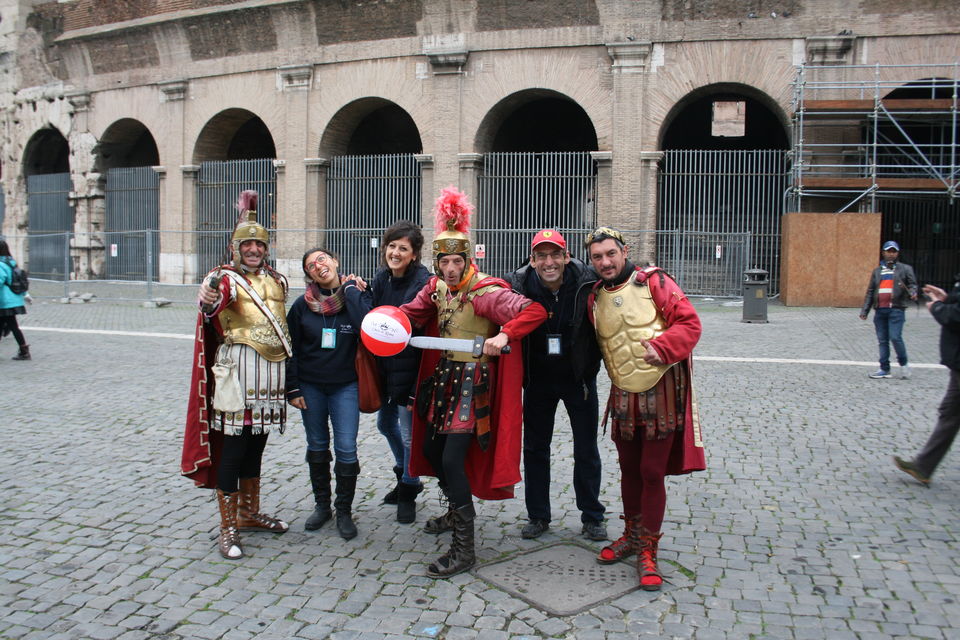 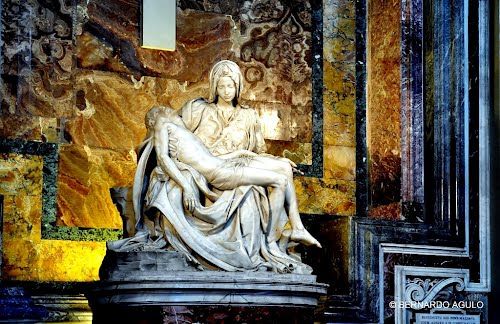 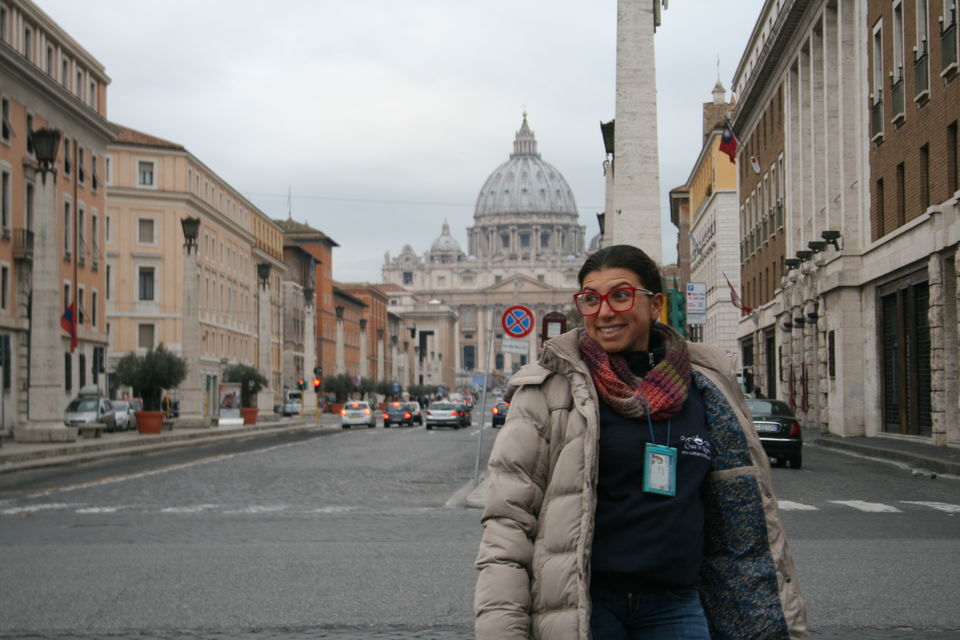