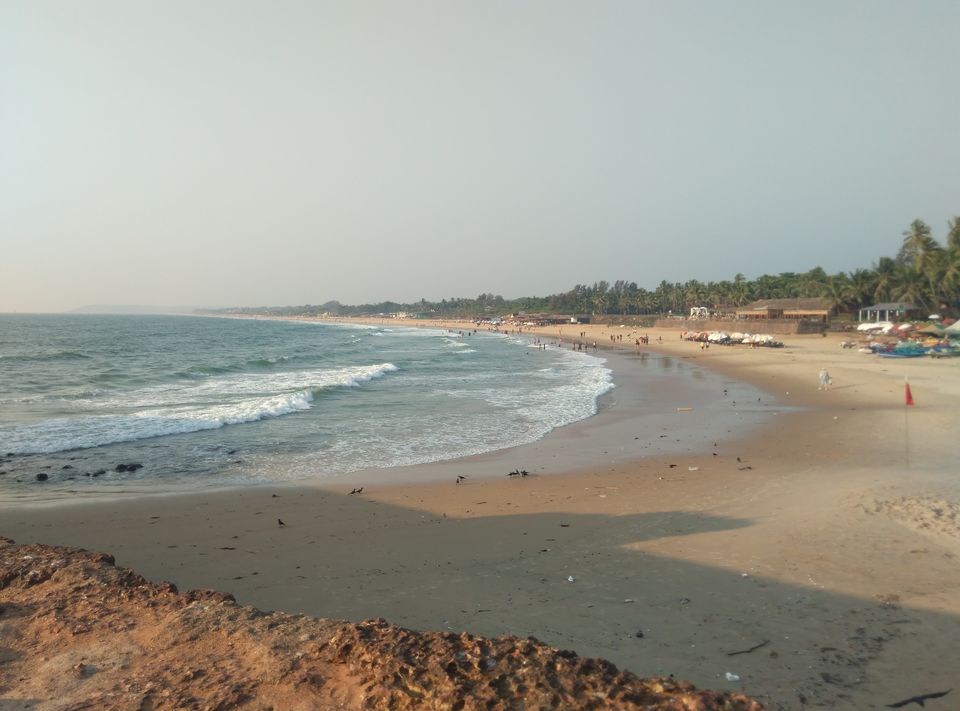 The bus started even before we settled in. I climbed up into the upper bunk, looked outside and realized it was not Howrah station this time. All my life I have traveled with my parents. My mother used to say 'Dugga Dugga' whenever our journey began and I used to see the station, drifting away, through the train windows. I could not say the words, called my mother instead and received the mandatory do's & don'ts list. This was the first time I was travelling with my friends.

The conductor woken us up in the morning. We got down in the Mapusa. We had a homestay booked in the Calangute. We got to know about that homestay from one of my friend's colleague. We confirmed over phone and transferred the booking amount online. We called the aunty, the land lord, as we were told and congratulation, her mobile was switched off. We tried to contact that colleague but she didn't pick up her phone either. It was 6 am in the morning. None of the stores were open. The people got down with us from the bus, were all gone. We, five friends were standing in the bus stop like fools.

The first thought that crossed our mind was that the aunty was a fraud and our money was gone. But we didn't lose hope. We thought there could be some issue with her phone. We didn't know the exact location of the homestay, all we knew was that it was behind the Domino's of the Calangute market (we asked several times for the exact address, but she didn't give). We knew her name luckily, one of my friend found a homestay with that name in the internet. The location was matching too. We decided to give it a try. We booked a prepaid taxi from the taxi counter of the bus stop and left for Calangute.

Goa wake up late in the morning, which is quite normal after those late-night parties. We could hardly see any people in the road. It was the first week of March, but still a strange mist was covering the city. The first impression of Goa was very different to me. I loved the city instantly. The worry about the stay couldn't stop me from enjoying its beauty.

We reached the Calangute market, asked some locals for the homestay. They were very helpful and we found the home easily. We mate the aunty, she was more than 70 years old. She was surprised to see us there and more surprised to find out that her mobile was switched off. Considering her age, we couldn't get angry with her. Another reason was that the home was very sweet. It was a two-storied house, the aunty stayed with her grandson and maids in the ground floor and the first floor was for the tourists. There was one 2 BHK and one 1 BHK for rent. We booked the 1 BHK. It had one room, attached bathroom, one hall, a kitchen and a big lovely balcony. We loved the it. It had all the necessary things. It had a small garden and there was almost 5-6 dogs so, it was very safe.

We freshen up, took some rest and left for the Calangute beach. The street market was just opening. We were very hungry, so had our breakfast in a roadside cafe. The food was awful. We decided to eat something near the beach, but while reaching there we forgot about food. The sea was so beautiful. Deep blue sea and white sand, perfect combination. It was off season, so not much crowd. We were interested in water sports, so started asking about packages. Initially they demanded high prices for everything, but after bargaining they agreed for Jet Ski and Parasailing for 1500 bucks per person. We left our valuables in the locker of a shack. We did the Jet Skiing first. It was for a very short period, it ended even before We can start enjoying. We went for parasailing next. They made groups of ten and took us to the deep sea by a boat. They had a different boat for parasailing, standing there. We boarded that boat and settled down. One by one we did parasailing. It was a once in a life time experience.

Once you are up in the air, they let you stay there for couple of minutes, those minutes can change your life. In those minutes I understood how big and mesmerizing our mother earth is and how small we are. I could see the blue sea beneath me, numerous tiny boats, white beaches and green mountains in the distance. It was so peaceful up there. I had no intension to come down, but they only allow to stay in the air for 4-5 minutes.

The return journey took long time as the boats were not ready. You have to spent around one hour in the sea, so avoid parasailing if you have sea sickness. We returned to the shack and ordered lunch. They were offering various types of sea foods and we were four hungry Bengalis, so you understand, we ordered plenty of fishes. We found some people roaming around with ink and tattoo sample in their hand. One of them approached us and we made temporary tattoos. If you want to have permanent tattoo, there are plenty of shops in Goa but for temporary tattoos you can rely on the beach vendors. They will ask big initially but you can manage to get it done in reasonable price after some bargaining. The food came on time. I tried shark and squid for the first time there. All the dishes were delicies, we enjoyed the food and ambience a lot. Drinks and hookah were also available, you can enjoy those too, if you want.

We didn't have two-wheeler license, so couldn't take scooty, and had to rely on taxies. I strongly advice to take a scooty or bike on rent because taxies are very expensive there and you can enjoy Goa better if you have your own vehicle.

We were trying to find a taxi to return to our hotel from the beach. All were asking huge money so decided to walk a little and then take a taxi. Suddenly we saw a small shop of a tour planner. We were interested to go for the Dudhsagar trip, so got in to ask about packages. They had packages in decent prices and the manager was very good and friendly (I couldn't recall the name of the shop but this is the only tour operator shop near the Calangute beach so it wouldn't be hard to find if you want so. It is in the left side on the way to the beach from Calangute market). We booked the half day Dudhsagar tour, including lunch for Rs. 1500, for the next day. We didn't have enough money with us for advance but still the manager took our booking. While leaving hotel our plan was to have only breakfast, spend some time in the beach and come back, instead we did Parasailing, had temporary tattoos, ate plenty of sea foods and booked Dudhsagar tour. It was Goa, nothing happens in Goa as planned.

We returned to the hotel, freshen up and relaxed a bit. We again left around 4 pm to visit the forts. There was a small cold drink shop near our hotel, the shopkeeper was very helpful. After knowing we were looking for a taxi he called his friend who had a taxi. We went to Chapora fort first. You can see the ruins of the fort. The fort is surrounded by sea and the view from the top is good. You can click nice photos from here. The fort closes by 5 pm so plan accordingly if you want to visit it. We went to the Aguada fort next. You can have a good view of beach and sea from here, you can enjoy the sunset here too. We sat on the wall, it was literary like seating above the sea. We spent some time there, hearing the roar of the sea and enjoying the cool breeze.

We got down as we were hungry again. There is something in the breeze of the Goa, you can eat double here. The cab dropped us in the Calangute beach. We had some snacks from a beach side café. The food was moderate. The Calangute beach seemed crowded so we decided to go to the Baga beach.

We did some shopping from the beach side market, bought some souvenir and gifts for families and relatives. We all knew drinks are cheaper in Goa, but how much cheaper we understood after going there, it's like one third of the usual price. It is true that beer is cheaper than water there.

We took a taxi from there and went to the Baga beach. The beach is less crowded and you can enjoy some peaceful time here. It was already dark when we reached there, but the beach side shacks had plenty of lights so, no worry. We settled down near the water, the weather was pleasant, clear sky, mild breeze. The perfect place for enjoying a drink or two with your friends. It will be a lifetime experience, I guarantee, you won't forget this evening in your life. Here you have to understand one thing, people are drunk from morning in Goa, so you have to be very sure about where you are spending your time and with whom, but you have to keep an open mind at the same time. In Baga beach some boys asked us to go to night clubs with them, they were polite and we refused them politely. Don't go for any arguments unless it's absolutely necessary. You will surely find some unpleasant people there, ignore them as much as you can. Enjoy fullest, but keep a watch of your surroundings. Avoid unknow and dark roads. From my experience I can tell the cab drivers are good there. The Calangute and Baga beaches are safe. You can find police there after sunset, they don't interfere in your business unless you are doing something offensive.

We had our dinner in one of the shacks. We ordered plenty of sea foods again, and beef. I tasted beef for the first time here and I liked it. We took a cab from there and returned to the homestay. I couldn't write everything that happened that evening, because ultimately what happens in Goa, stays in Goa. You will understand it when you are here with your gang.

Visit my profile for the next part :)

It was almost 10 pm. My childhood friend, seating beside me, was busy with her 'travelling to Goa' post. I shifted my attention to the road again. Even the known roads of Pune were looking different from that angle. I still couldn't believe we were indeed, travelling to Goa. Like every other group we had done Goa trip planning several times which never happened. So, this time I was not actually sure. But it happened this time. All because of my four-crazy flat mates. Everyone warned us against it. They told, Goa would not be a safe place for five girls, travelling 'alone'. We knew Goa is not a safe haven but didn't care enough.

I was happy, but nervous too, was wondering whether I had packed all the necessary things or not, but realized it was meaningless. I stopped worrying and started enjoying with my friends. The bus stopped beside a road side dhaba. We already had our dinner but still came down to get some fresh air. The bus started again soon, we were hungry, so ate the packed snacks which we had with us. The Neeta Volvo AC sleeper was not that good. There was not sufficient place for two to sleep. So, my advice is that, try to avoid Neeta Volvo.