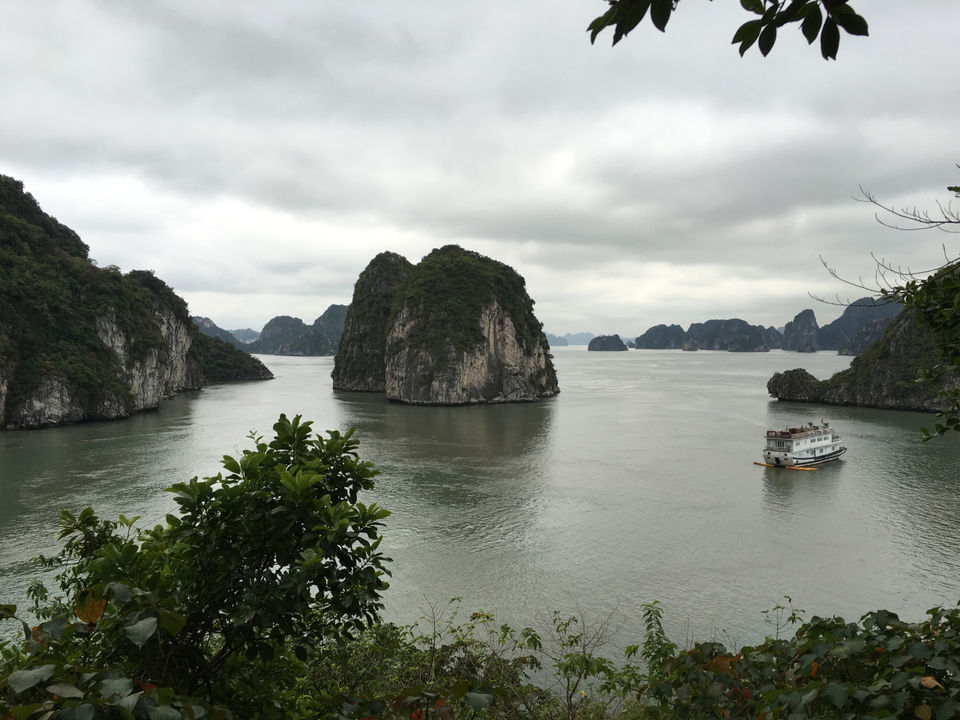 We just got back from a trip to north Vietnam and we had such a fabulous time and the best Christmas till now! We were there for 5D4N- 2 nights in Hanoi, 1 night in Halong Bay and 1 night in Yen Duc village which is mid-way between Hanoi and Halong Bay.

Our first stop Hanoi is a charming juxtaposition of french colonial buildings and Buddhist pagodas. We stayed at the beautiful Hanoi guest house royal which is very conveniently located close to all the major tourist spots. A must visit place is the bustling old quarter in the heart of Hanoi. Here you can find shops, cheap local eateries and numerous hip cafes.

Amid the hustle-bustle is the serene Hoan Kiem lake or the ‘Lake of the restored sword’ with a beautiful Turtle tower in the middle. It looks prettier at night with all the lights and the Hoan Kiem bridge lit up in red. Apparently, it is also a very popular destination for pre-wedding photography among the locals!

From the lake we walked towards to the St. Joseph’s cathedral which was all decked up for Christmas Eve. It is the most important Church in the city which was built in 1886 in Gothic revival style to resemble Notre Dame de Paris. We were lucky enough to hear the beautiful voice of a girl singing ‘Silent Night’ in Vietnamese.

We ended the day with a sumptuous dinner at one of the eateries called New day in old quarter serving delicious local food. Post dinner, we went to the famous Giang Cafe to try out egg coffee. Now a traditional Vietnamese drink, it was made for the first time by Mr. Giang when there was a shortage of milk in the city and he used egg yolk to get the frothy texture. While now a number of cafes have egg coffee on their menu, they all come second to having it at the original cafe which is now run by Mr. Giang’s son. We found the coffee to be super delicious and I even tried the egg coffee with chocolate. There are a number of variations having rum, beer etc. Maybe next time !!

Next day, we left for the much awaited cruise to Halong Bay, a UNESCO world heritage site and Vietnam’s top tourist destination. After a lot of research, we chose to go with Indochina Junk for 2D1N on the luxurious Dragon Legend ship. I believe it was one of the best travel decisions we have made. Right from pick up in Hanoi till drop off, it was an absolutely wonderful experience. We got picked up in a luxury van equipped with wifi. The journey was quite nice since Vietnamese country side is so green and picture perfect. The ship was luxurious with 24 large cabins, a huge dining area, sun deck and mineral water pool. The rooms were large and tastefully done with a huge window to admire the view.

Hạ Long Bay is the center of a larger zone which includes Bai Tu Long bay to the northeast, and Cat Ba islands to the southwest. This junk took us to the unexplored and exquisite Bai Tu Long Bay. We couldn’t stop gawking at the drop dead gorgeous landscapes. Limestone karsts emerging from emerald green waters made a very mystic landscape and photos actually do not do much justice to the actual beauty of this place.

The food on board was the best we have ever had with the most fresh ingredients and evidently a lot of effort put into it by the Chef and team. Every dish was 5-star quality and every meal had 8-9 courses. The staff on board was very warm and friendly entertaining us with their jokes and magic tricks.

The itinerary of the cruise is well designed to include activities as well as leisure time. First day we went for Kayaking amidst the most gorgeous scenery. The cloudy weather added to the mystic charm of the place! At night, the ship docked near an island and the feeling when you see those beautiful islands from your window while lying in your bed is priceless. We started the second day by doing Tai chi on the sun deck early morning at 6:00 a.m (totally worth waking up early morning!) and after breakfast we hiked on one of the 2000+ islands on the Bay to see the Thien Canh Son cave. The cave was beautiful with its rocks and stone formations and views from the cave were stunning. After checking out the cave we sat on the beach for a while on the lounge chairs just to admire the surroundings and feel lucky to be there!

After lunch, we were dropped to the rustic and beautiful Yen duc village which is mid-way between Hanoi and Halong Bay. This was also arranged for us by Indochina junk. I would recommend anyone going to Halong Bay to stop at the village for at least one night for the authentic Vietnamese village life experience. The village has poetic scenery replete with mountains, charming rice fields, pretty houses and streams.

At Yen duc we were accompanied by our guide Na who is a local and has great knowledge with respect to history and culture of her people. She was brimming with positive energy and our trip would have been incomplete without her. She took us to an ancient pagoda on our bicycles and explained how Vietnamese Buddhism is an amalgamation of Chinese Buddhism and Hinduism.

We learnt about traditional ways of rice production and tried our hand at it. We caught fish with traditional bamboo baskets and made floating donuts for dessert at night. We visited the oldest house in the village which has seen 13 generations of a family. Their family tree took up an entire wall of the house! Talking to the lady of the house was delightful as she looked radiant while talking about her family and their contributions in the war. We visited another family who make brooms for a living and helped them in making a broom while chatting.

The food at the village deserves a special mention. Made from locally grown and fresh ingredients, it was the most amazing food I have ever had. It was truly the highlight for me. Also, the clam and pork pho was my favourite pho on the entire trip.

We were treated to a water puppet show by the villagers which was very entertaining. The puppet show originated as a means of entertainment in north Vietnam in the 11th century and it was a delight to see them rooted to their traditions. We were very sad to leave and that’s the impact that Yen duc has on you in less than 24 hours. We are glad Indochina junk introduced us to this experience.

We were dropped back to our hotel in the luxury van. We spent the evening strolling around Hoan Kiem lake and then to Hanoi opera house which is a posh area. We had egg coffee at the same place, shopped at the night market (open on Fri, Sat and Sun) and had dinner again at the same place.

Hanoi is cold during December with temperatures as low at 12 degrees. Halong Bay is colder at 10 degrees. Loved the weather as it was a good change from the year-round 30 degrees in Singapore. All in all a very merry Christmas and new year !!

This post was originally published on 'My Travel Treasures'.