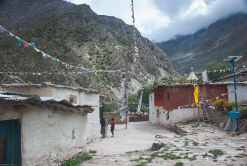 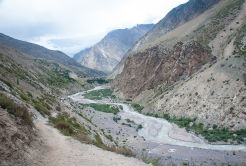 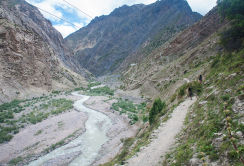 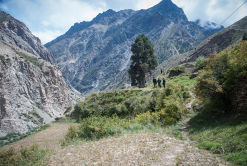 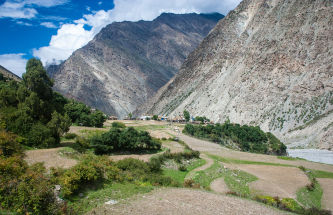 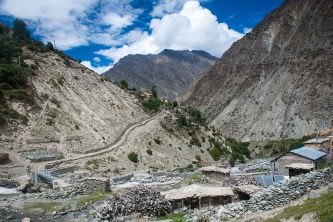 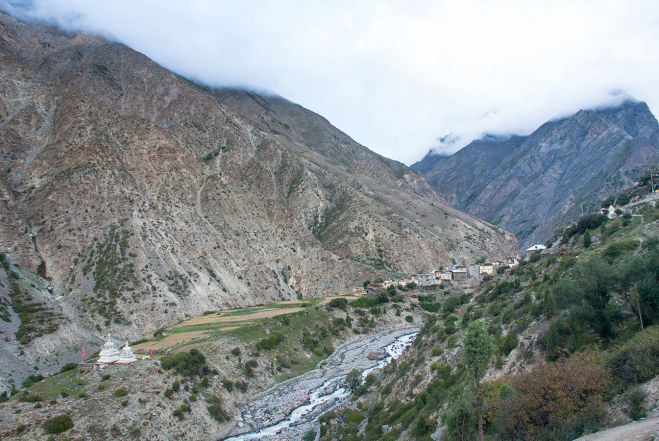 Kinnaur Kailash Parikrama is one of the toughest treks in Himachal, around the holy Mount Kailash, also called Kinner Kailash in Kinnaur. It’s a 60 Km trek, which starts in Thangi through Charang, Lalan Ti, crossing Charang La pass (17,194 ft) and ends in Chitkul village – the last inhabited village accessible by road, near the Indo-Tibet border in Baspa valley of Kinnaur, Himachal.

Kinner Kailash parikrama: on top of Charang La pass
Mostly done by pilgrims, it’s a difficult trek and there are no specific directions to follow, just a few stones kept on top of each other by former trekkers marks the path. There is no cellular connectivity here or any villages on the way, so unless you have a compass and a map, or a guide, you’re sure to get lost. It’s a non-touristy, difficult trek and the most difficult part is the climb up Charang La pass and ends at one of the most beautiful and remote places in Kinnaur – Chitkul village. We did the last 50 Kms of the trek starting from Lambar, near village Morang to Chitkul. It took us 6 days, a lot of courage, determination and faith to complete the trek. It was a test of stamina, character and fitness and a once in a lifetime experience that’ll live in our memories forever!
Here’s the Trek route on Google maps
Day 1 – Lambar to Charang (22 Kms)
Day 2 – Stay at Charang village and trek to Rangrik Monastery
Day 3/4 – Charang to Lalan Ti via Lalan Ti pass (15 Kms)
Day 5 – Lalan Ti to Charang La pass base camp (6 Kms)
Day 6 – Charang La pass to Chitkul (8 Kms)
The trek from Lambar to Charang is moderate even though it is a long one. We reached Charang by evening and stayed at the PWD guesthouse for another day to acclimatize and to visit Charang village and Rangrik Shungma or Charang monastery, which is a 2-hour trek from Charang village and is considered the most holy monastery in Kinnaur. A few landscapes from the trek through Charang village to the beautiful Rangrik Monastery.

After a nice and peaceful day in Charang, we started next morning to Lalan Ti and had no clue about the ordeal that lay ahead of us. The trek from here is in complete isolation. We didn’t have a guide or a compass and almost got lost just after crossing Lalan Ti pass the first day! The mountain air with less oxygen made us dizzy and we had to rest often. We re-filled our water reserves when we found a stream. After hours of trekking through the treacherous landscape we couldn’t see any hut next to the river, as mentioned in the resources we’d collected. With limited information about the trek and not a soul around to ask for directions, we didn’t have anything else other than the pile of stones to follow and it was getting dark. We pitched the tent and were worried all night if we were going the right way! According to our map we were going right – parallel to the river. So we headed in the same direction next morning following the pile of stones – our only hope.

Climbing through massive boulder-like stones, by noon we saw finally the hut, but it was on the other side of the river! Which left us wondering again if we were supposed to be on the opposite side! Despite the doubts, we kept following the river and reached Lalan Ti – the beautiful emerald lake. From here it took us another day to reach Charang La base camp and finally we could see Charang La pass through the binoculars!

Lalan Ti
We’d see the pass through the binoculars at almost every rest point as it seemed closer than it was, and that somehow gave a little more confidence and inspiration to keep walking. After we reached Charang La base camp, we decided to trek up to the foot of the ascent to the pass, so we were closer to the most difficult part and could start the climb straight away in the morning. But after we trekked up we realized that there is no place to pitch a tent! There was just a frozen patch of land with different sizes of loose stones around – gravel size to huge ones. We managed to spend the night somehow on a huge slanting rock, the largest we could find. The hard part of climbing the pass was still ahead of us!

We woke up to the view of the pass and the tiny prayer flags fluttering at the pass. This was a real test – the climb up the pass and the descent down to Chitkul village. It’s a really steep ascent with not much to hold other than gravel-like loose stones. It’s tricky and dangerous but we reached on top of the pass by noon and that didn’t seem difficult after what we had already endured. The pass is like a ridge, no more than a few feet in width, on the other side of which is an even steeper fall!

The descent to Chitkul was a never-ending walk through huge sharp stones and boulders, with no stream of water till Chitkul. We’d finished our water and the village was nowhere in sight. The sun had set and it was a matter of minutes before it became completely dark, and we had no idea how much further we had to trek. Soon our torches were out and we followed the same pile of stones that got us till here. After a long scary trek through that terrain in the light from our torches, we reached Chitkul around 11 pm that night. I couldn’t believe that we’d finally reached and it was all over! The next morning was the most beautiful morning I’d seen ever! It felt divine to have reached Chitkul after the rigorous trek: like entering the gates to Heaven!

The trek was a kind of meditation and gave a sense of sublime, where I got to contemplate and reflect on my life. I got a fresh perspective towards life and I feel fortunate to have experienced the adventure of living in the Greater Himalayas, even though it was for a few days. It’s a divine place where the earth meets the sky and only nature rules – it’s magnificent desolation!
Another account of the Kinnaur Kailash Parikrama trek and more information:

How to reach – The nearest railheads are Kalka & Shimla. Kalka is 300 kms (10-12 hours drive) from Reckong Peo. Reckong Peo is the administrative headquarter of Kinnaur district.

If you are a foreigner, you’ll have to register and obtain Inner line permit for the trek. For Indians proof of identity is required which is checked at the ITBP (Indo Tibet Border Police) check post.  It’s recommended to take a guide along for this trek and not attempt this trek on your own. Food & medical supplies need to be taken, as there is nothing but the beauty and fury of nature all the way from Charang to Chitkul!