To Spiti by public transport 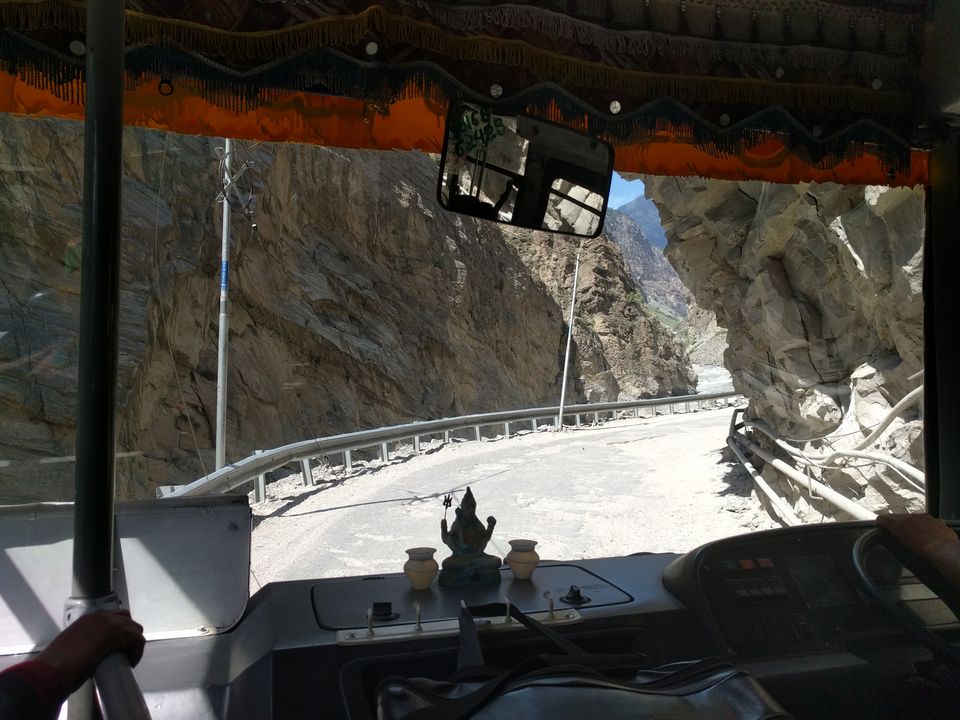 It is 7 PM of a hazy Chandigarh evening. We have missed the last bus to Reckong Peo. Earlier, when we set out from Mumbai, the bus to Peo was the only part of our itinerary that we were sure of. Now, it felt like a round one knockout punch. The bus terminal meanwhile is frenetic, conductors are calling out loudly, empty buses roll in and leave the stand - overflowing with humans and all kinds of luggage. The confused noises and metallic smells are unmistakable.

We stand besides the counter and implore - should we stay back in Chandigarh and wait till dawn? Or do we get started with our adventure and let the road take over our fates? On a trip, I always preferred getting on with it, not break the momentum, as if the greed of exploring took over, instinctively provoking me to wander off in search of new lands. And so I ask Swanand, my younger cousin and partner on this trip, to book two tickets to Shimla. It may happen that we will end up in Shimla, in dead of the night, looking out for a lodge to crash - but we shall manage. I feel bad for Swanand though, and a little concerned too for subjecting him to this ill planned itinerary in our first trip together.

The evening sky glows in a shade of magenta. The pink light bounces off the concrete structure - making everything appear very beautiful. The dim yellows inside the bus provide a soothing contrast to the colours outside. The bus has now begun cruising along the streets of Chandigarh, passing through the towns of Panchkula, Pinjore and Kalka. It is all uphill now. We start to leave the plains behind heading towards the lights that we can see at the top, higher up in the hills. I can feel my excitement - the trip has finally begun, slowly entering into the realm of the Himalayan kingdom. But with this excitement is also a tinge of nervousness, because, unlike any other trips I have done before, there's no one waiting for us at the end of the road.

We arrive in Shimla by 12:30 in the night, much like two stranded souls waiting to be pounced upon by the predator guides of the night, looking to make a quick buck. They offer us free rides to hotels nearby, in an Alto which clearly has seen better days. We go up, then come down swirling crazily, the driver knows the lanes and gullies at the back of his hand. Even the basic rooms shown were far too expensive. Perhaps, it was the commission of all the touts in between that drove the prices through the roof. At the end though, we give in, no point in finding a room that was cheaper, if we do not get a chance to sleep at all.

Our early morning bus moves on quaintly through the Shimla hills. The mood within the bus appears full of fatigue, with heads bobbing sideways rather than remaining straight upright. The conductor is sharp though, his hair has been well oiled, wearing a blue uniform and a navy blue scarf. It is not even 6 in the morning, but it is fairly bright, lifting the green hills around us. After getting some rest, the journey today has so much more optimism, conscious of the fact that we have survived our first day.

The bus skips through the mountains, and with the morning progressing, more locals start boarding, dressed in woolen jackets and Pahari topis, bringing more liveliness with their friendly banter. The women were very fair with glowing red cheeks, but also possessed a slight gruffness in their manner of speaking. This is daily commute for most of them, heading towards apple orchards or fruit markets, which are dominant in this part of India. The apple trees that we see on the slopes have a covering of white nets to protect the small cherry-shaped young apples from hail, and possibly birds. I am told that these orchards are highly profitable - most money during demonetization in Himachal was collected not from the cities but from towns higher up, surrounding these apple orchards. 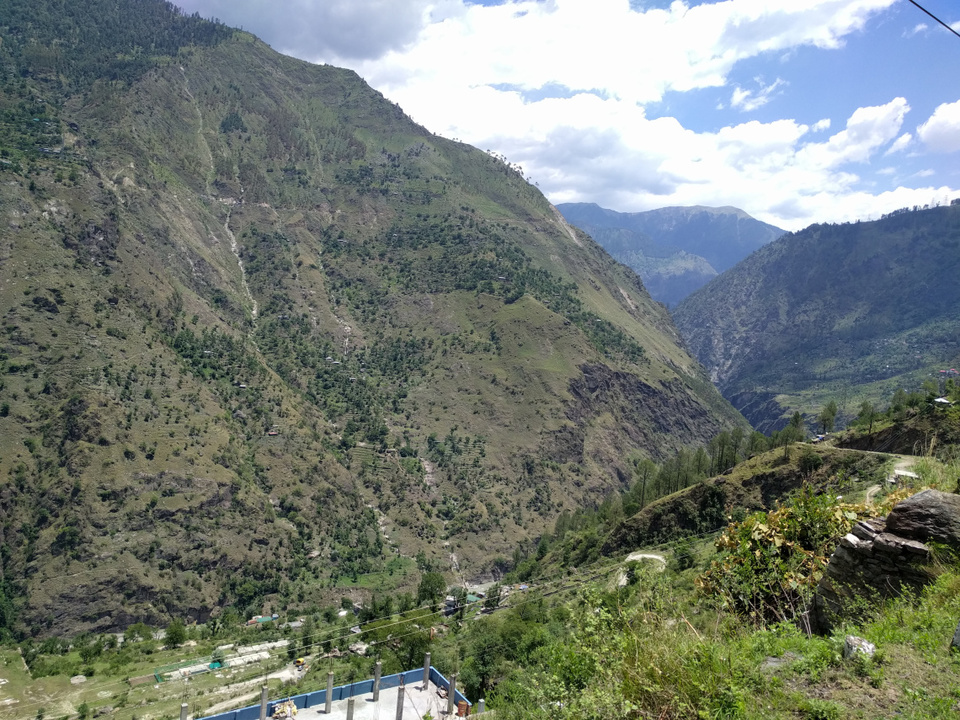 Soon, we are following the Satluj upstream. The mountains have now become steeper and the terrain rocky. The trees appear sparse. Along the river, there are scores of hydroelectric plants. Oddly though, there are also derelict tunnels bored in the mountains one after the other, barricaded by iron gates. Before my imagination starts running wild, I come to know that instead of run of river hydro projects, they now also drill a tunnel inside the mountains, directing all the water through it. Moreover, the turbines and powerhouses also reside inside. In order to ensure the work is done fast, the power companies start boring from multiple points, which are nothing but these "derelict" tunnels.

Near Peo, the Kailash-Kinnaur range is in sight. Both me and Swanand are now sitting in the front two seats, alongside the driver. Swanand has been very quiet all through out the trip, bogged down by the bus travel. The conductor helps us spot the Kailash peak, as a local friendly lady starts chirping about its significance. She has a very strong pahari accent, and tells us about the last time she went up to the Kailash peak for a pilgrimage. As she describes, there is an apparent glow on her face. The pleasant demeanor rubbed off on us. We felt happy to reach Peo. 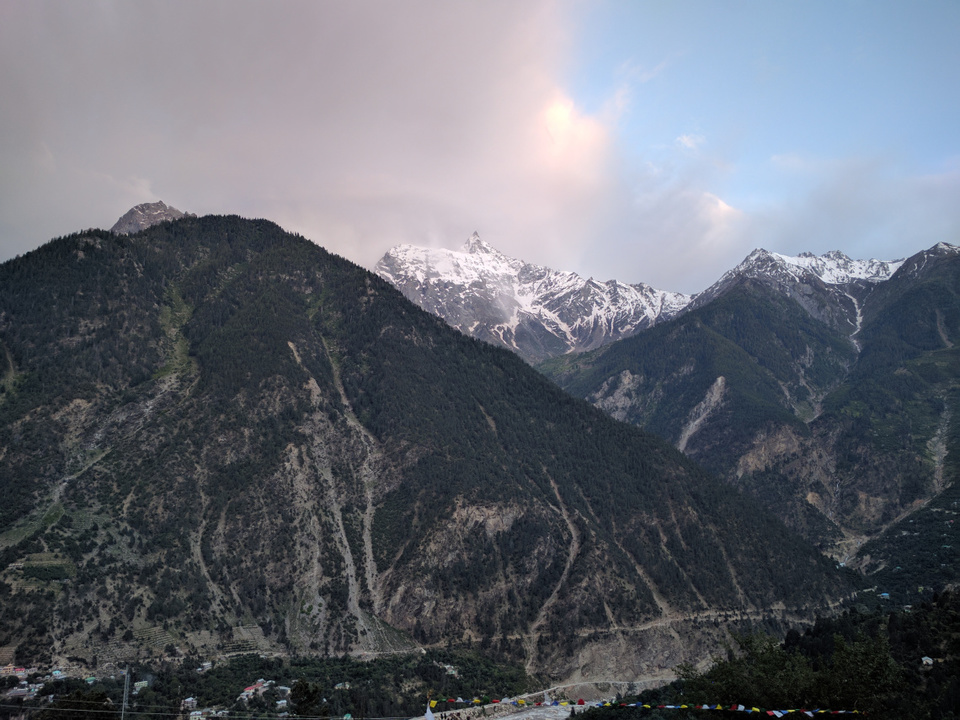 It is 6:30 in the morning, I am hauling our trek bags on top of the bus. The Kinnaur-Kailash and Jorkanaden peaks lay still, observing the ongoings, waging its silent power and mysticism in the valley of mortals. The stand at Peo is crowded with buses, its green and white fleet, the true sentinels of the mountains here. 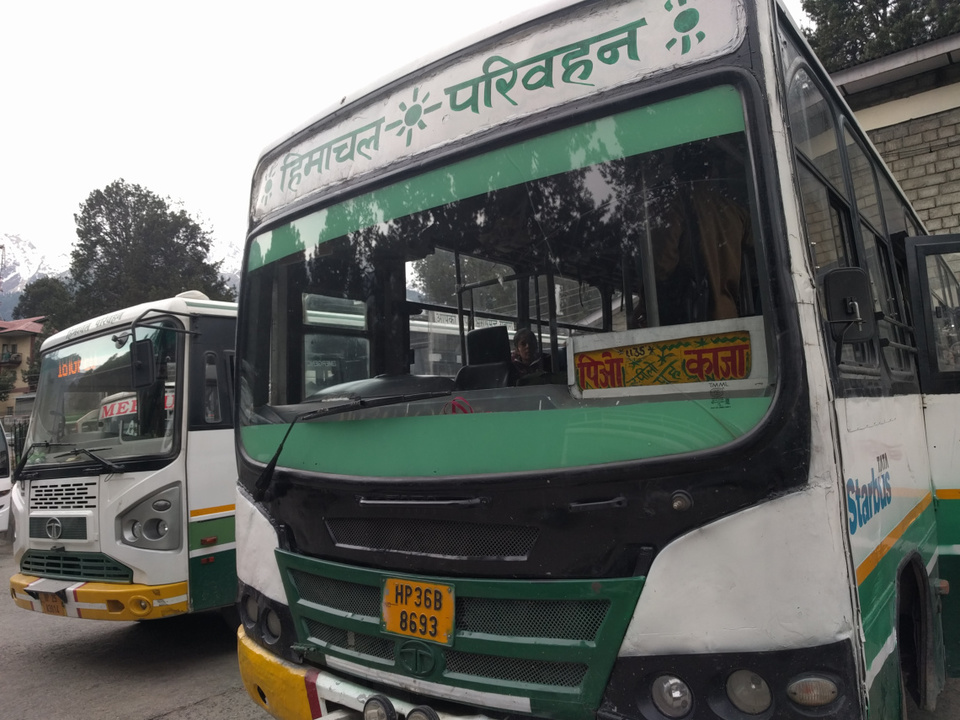 Just outside Peo, we get a sense of the terrain up ahead. The roads are not roads, but narrow powdery passages, flanked by weak, brittle rocks on one side and steep rocky gorges on the other. The Satluj valley is like a monochrome canyon, where we can barely see the sun, with the high mountains rising on either sides, almost bullying us. 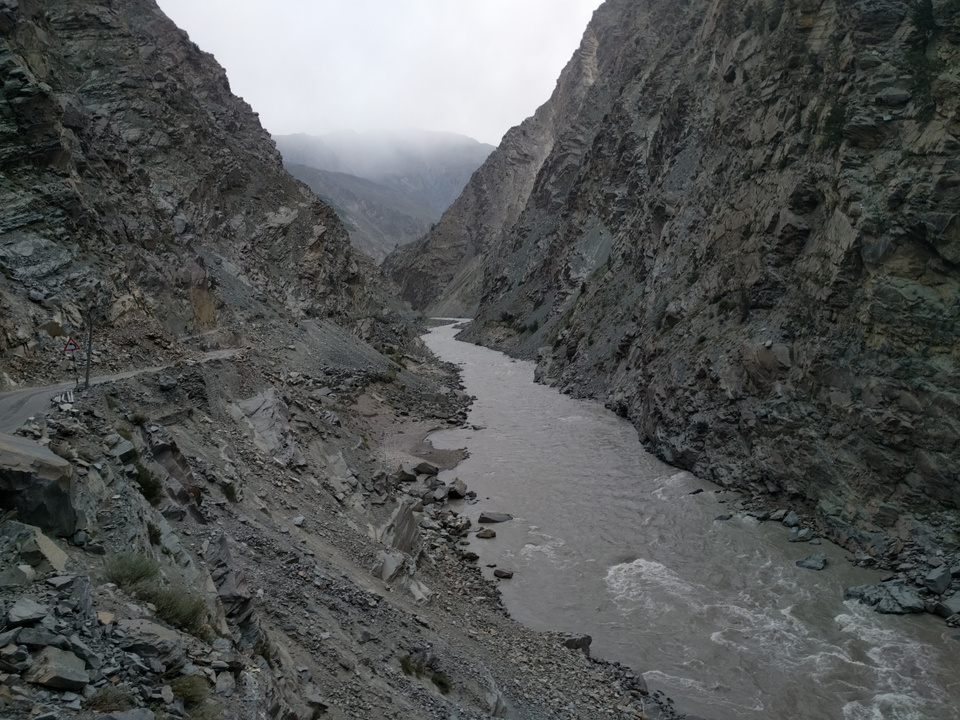 With us in the bus is a SBI officer deputed in Pooh, some 60 kms from Peo. It is his third year here, but that instead made him very spiteful " On most days it is very cold. Jindagi barbad hai yaha." In some sense, he is right though. The minimum temperature in this region goes as low as -35 degrees, as locals would either finds jobs in the mountains downhill, or would wait out the winter with help of big tandoors. We stop at Spillow for a chai break. The officer insists in getting us tea. " In winter, this region gets so much snowfall that the roads get closed days on end. One can't go outside, we are prisoners in our own homes. No matter how many warm clothes we wear, yet there's bone chilling cold. I don't drink, but sometimes we have to borrow alcohol from the army just to remain warm. And despite all this we still need to run the bank ". The three of us stand there, with a warm cup of tea, looking at the street. Life in the mountains can become hard. But perhaps that is why the locals here appear so happy. The harder one's life is, the greater the happiness - unburdened by any other complicated emotions. 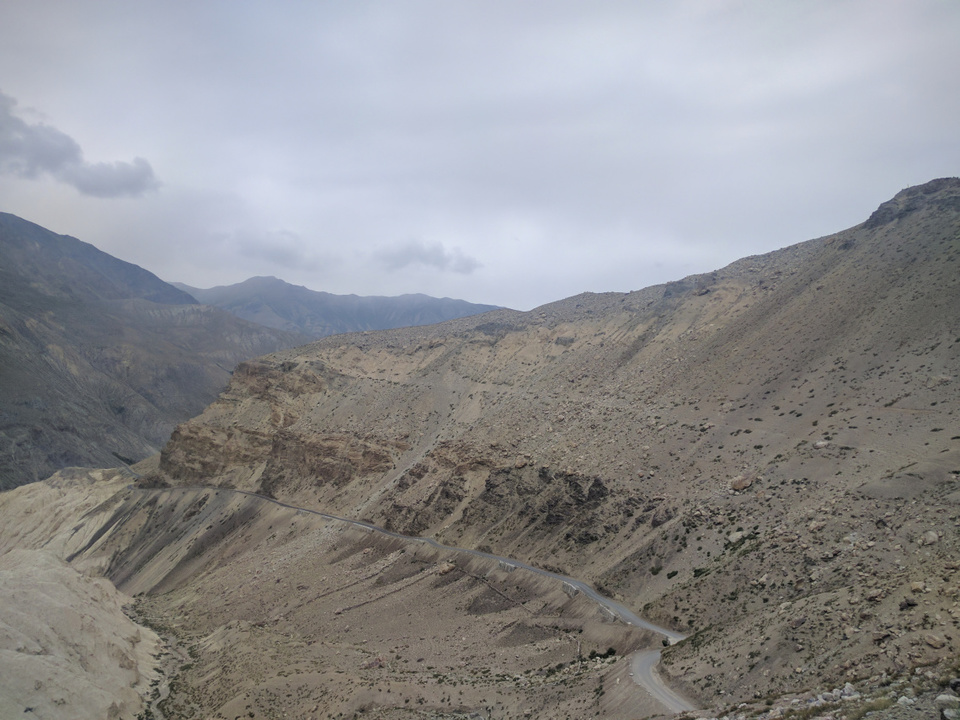 We take a diversion towards Spiti, gaining altitude quickly, following endless loops that go up forever, thus leaving Satluj behind. The region has become arid, almost desert-like. It is a surreal view, very grey and gloomy, which not many of us are accustomed to see high in the mountains. The rocks are loose, so is the soil, which at one point of time was underneath the Tethys sea. Villages here are like oases, which can be spotted from far off, patches of green in the continuum of barren mountains. We stop at Nako where a bunch of loud Israelis board the bus. The ruckus of the crowded bus is now complete - Pahari, Tibetian, Hebrew, English, Hindi, Punjabi and a dash of Marathi as well!

An hour post Nako, the road now slowly loops down in the valley below, the sun beginning to spread it's light. Spiti river here has expanded it's girth, gently flowing in form of multiple small rivulets, in midst of high mountains on its sides. Some of them have the last remnants of snow at the top, at the same time, some appear like an abstract art form, untouched in years that have passed. 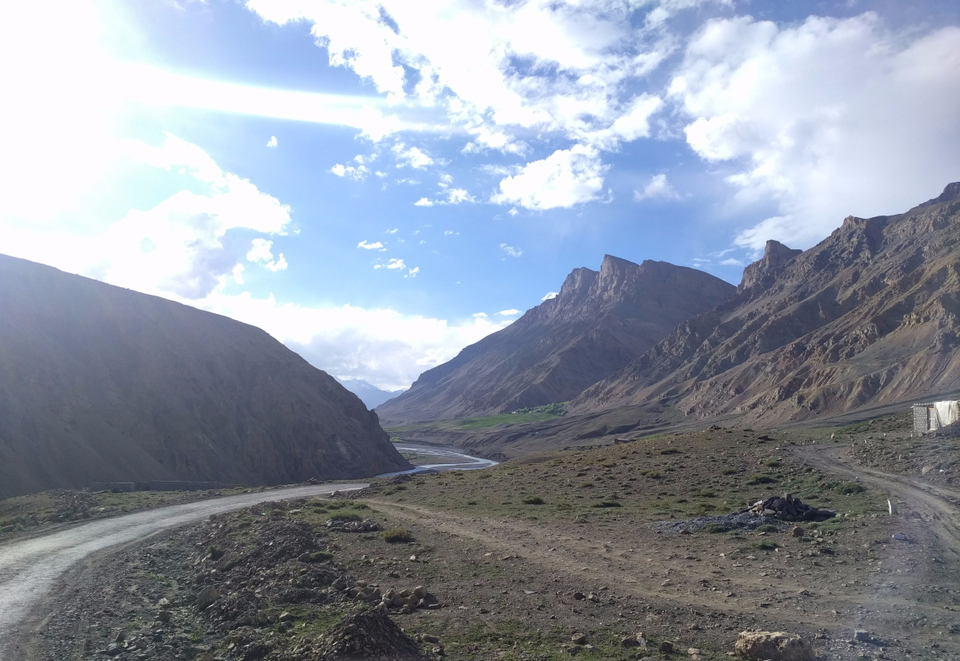 Kaza is near. Small mud houses painted with bright colours pass by. The mud helps in storing heat, ensuring these homes remain very warm even if the temperature outside is sub zero. There are stupas - conical structures that reflect the Buddhist influence in the valley, each made up of stones that had markings in Tibetian. It is said to be a good omen to pass a stupa by its right. We soon enter Kaza. It seemed like any other town up in the hills - shops selling antiques and warm clothes, a bus stop, a market road, restaurants selling momos, yet it had a very distinct soul, a vibe, formed by a combination of foreigners, back packers, bikers, who make Kaza their home for days on end, all somehow here in search of the magic that these mountains emanate. Meanwhile, we start unloading our bags from the top. Along the way we have made several acquaintances, trying to understand their plans and itineraries in Spiti. Out of them, there is one person who is heading to Kibber for the Parang-La trek - all alone. He is carrying two backpacks, which has tents and supplies that he claims will last him through the entire trek. " Here you are, in a cold desert, with no trees or shrubs or water or network, isn't it a huge risk to just head out all by yourself? " But I suppose rationality goes for a toss in the mountains. 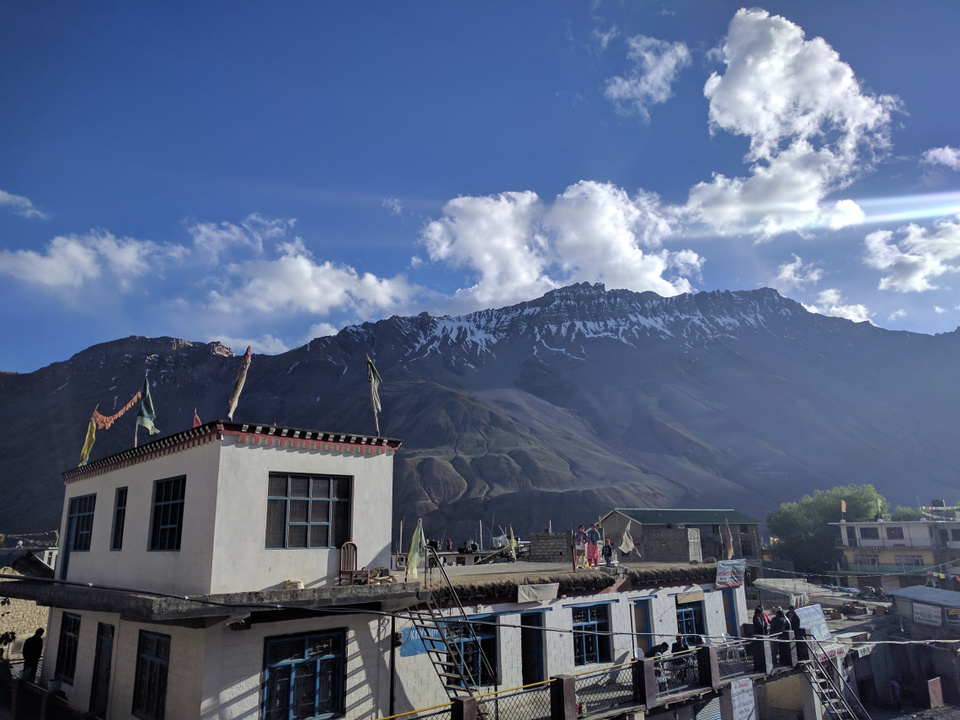 A few days back, in Mumbai, I was imagining how the Spiti valley will be like. I thought of it like some form of fairyland, something unknown, something mysterious, but here I am. This is Spiti. It is an odd feeling of realization and accomplishment.