India Travel GuideIndia TripsDudhsagar Waterfall: Something Which'S There In Everyone'S Bucket List But Never Ticked Off

Dudhsagar Waterfall: Something which's there in everyone's bucket list but never ticked off

Dudhsagar waterfall; a place for trip fanatics and casuals alike. It ends up being on almost everyone’s bucket list, but it rarely ever gets ticked off.
But my friend Kshitij and I not only witnessed the serene beauty of Goa but also ended up completing a trek of 21km. Planned trips always find a reason to self-destruct so when we did decide to go, we didn’t discuss it with other people or lay out a grand scheme, we just…went.

The entire trip was adventurous and thrilling, and it all started on the 1st of September. It was around midnight at Surathkal station, near Mangaluru(one can catch train from Mangaluru Junction too). I didn’t have a reserve a ticket, so I bought an unreserved one and got on to Netravati Express at around 12:20am. It wasn’t crowded and I got a seat. The train was supposed to reach Madgaon by 4:35 am, but true to the standards of Indian trains, I was finally dropped off at seven. Next, I got onto Vasco-Kulem passenger (Madgaon to Kulem train frequency is pretty good) to finally reach Kulem around nine.
Whereas my friend got a train from Pune to directly Kulem. Btw if you are planning to reach here from Mumbai then get down at Madgaon and then catch Vasco-Kulem Passenger to get down at Kulem station. Moreover, don't get confused between Kulem and Kalem station.

The trek started from the station itself, as it had innumerable algae  patches making it very slippery (I would recommend to wear proper
shoes for the trek). It did not stop there, the Monsoon rain mixed with cow dung made it that much worse.
We soon moved out of the station and got a guide who charged us Rs.500. He also provided us with life jackets (I don't exactly remember the cost but the amount was close to Rs.50). For using your own DSLR they will charge Rs.30, so don't pay more.

We’d have to walk around 4-5km along the railway track, and then a further 5-6km into the forest to reach the waterfall. We passed the railway lines by keeping in track of the trains. The forest was like a paradise, filled with rich canopies of deciduous trees. The whole area comes under Bhagwan Wildlife Sanctuary with numerous species of flora and fauna waiting to be seen. The melodious chirping of
different birds and the buzzing of insects was captivating. A few of the streams we came across were slippery and perilous to cross. We
encountered many monkeys on the way but we were instructed not to interact with them as it could be dangerous.

After a long and tiring trek, we reached our destination. The view was majestic and maybe it was the pent-up exhaustion acting up but I felt a sense of Nirvana.
I could see clearly how nature was narrating its story around me. The path a drop of water took to reach here all the way from the 610m high fall , how the breeze held its own mildness in this noisy atmosphere and the strong tale the rocks had woven of surviving against the harsh imprudent waves of the fall. We stayed there for thirty minutes, clicking lots of photos to try and capture the beautiful scenery into one frame. Then came a train to provide us with one of the best pictures of our life. It made me the feel like a professional
photographer😍.

Now came the worst part; going back. Our hearts weren’t ready to leave that place but unfortunately, we had to. While returning it started drizzling quite a bit so we got under our umbrellas. Then we had to run along the railway track in order to catch the last passenger train at around 5pm. My friend left for Pune from Kulem itself. But I had to reach
Madgaon and get onto the next train. Actually, my trip wasn't completed yet. I caught Mangala Express at around 9pm. Like earlier I was in the unreserved coach. I reached Mangalore Junction at 2am in the night (as that train doesn't have any halt at Surathkal station). Finally after reaching my hostel room, I washed my clothes then slept for 12 hours. But, the trip was worth all the effort, as it didn't empty our pockets, gave us beautiful pictures, sweet memories and an experience which I would never ever forget.

By the way if you are planning to go for this amazing trip, first confirm that whether the trek is open or not, as due to rains the forest officials close the route as it becomes too dangerous. I will share the contact number of the guide who guided us to there, one can call him and confirm about the availability of trek.

Moreover, I won't get any commission by sharing his details, i just don't want that you go all the way till there and then be like "Band hai chalo yaar wapas".

Hope I motivated you to get out of your comfort zone and tick off this from your bucketlist, oh yeah. 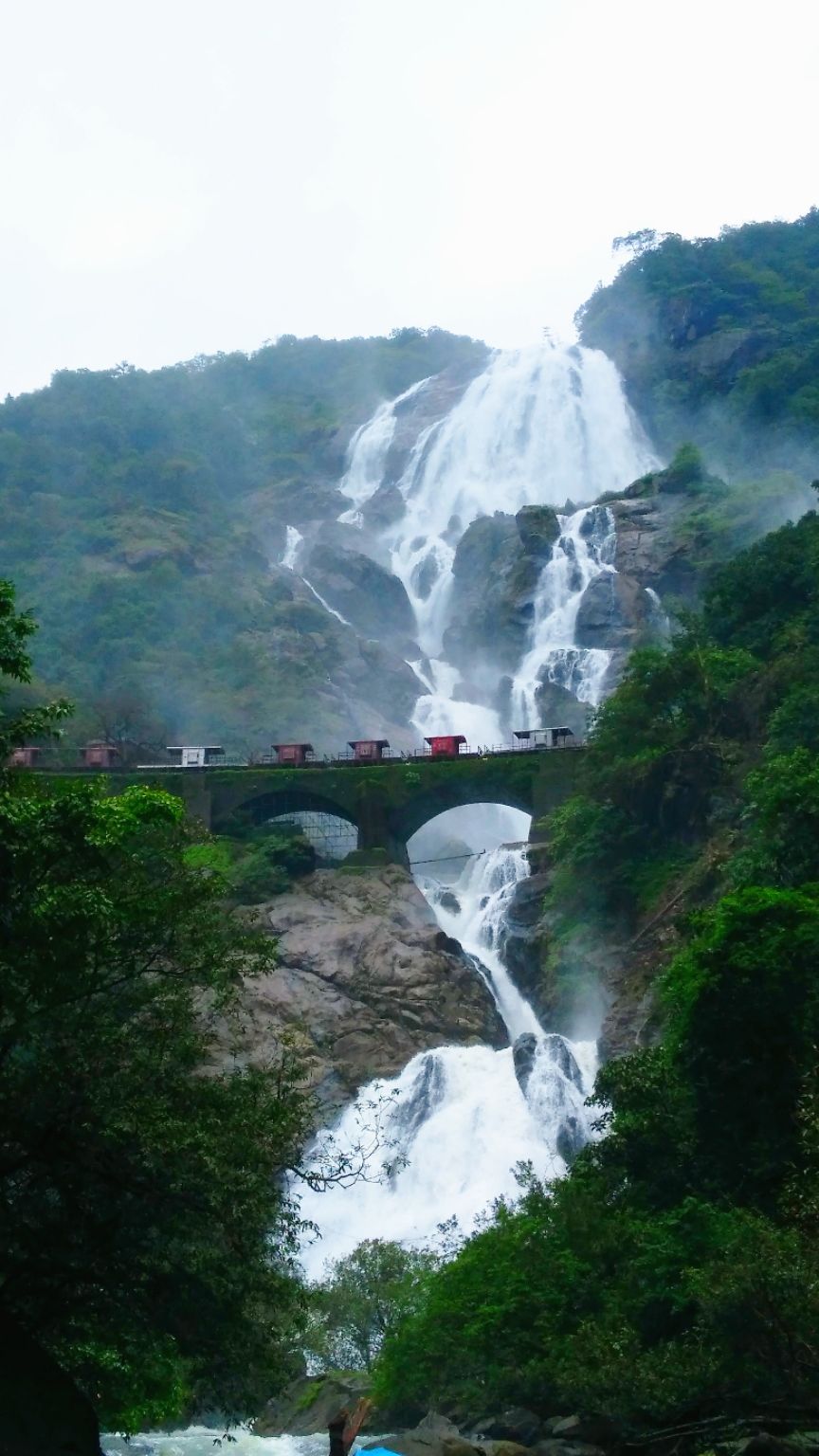 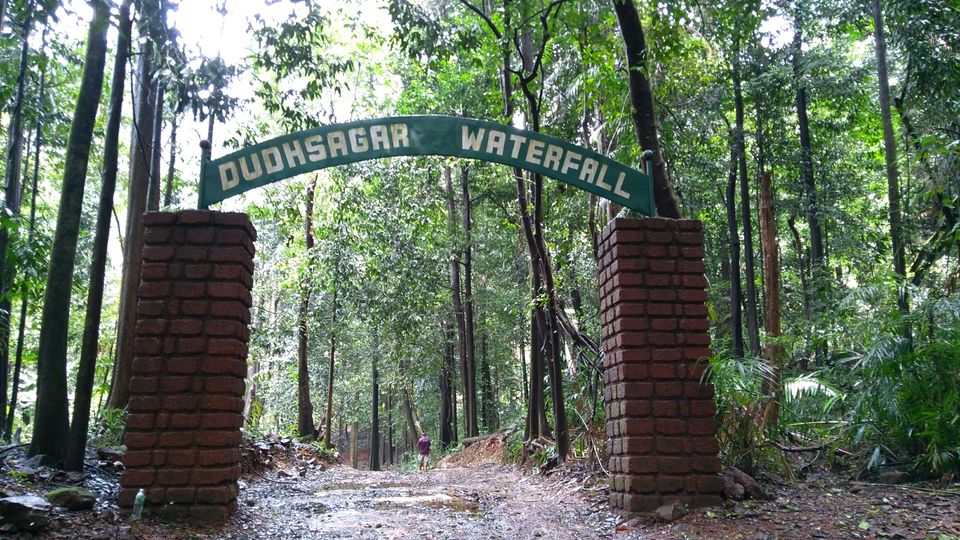 Trails which are to be crossed 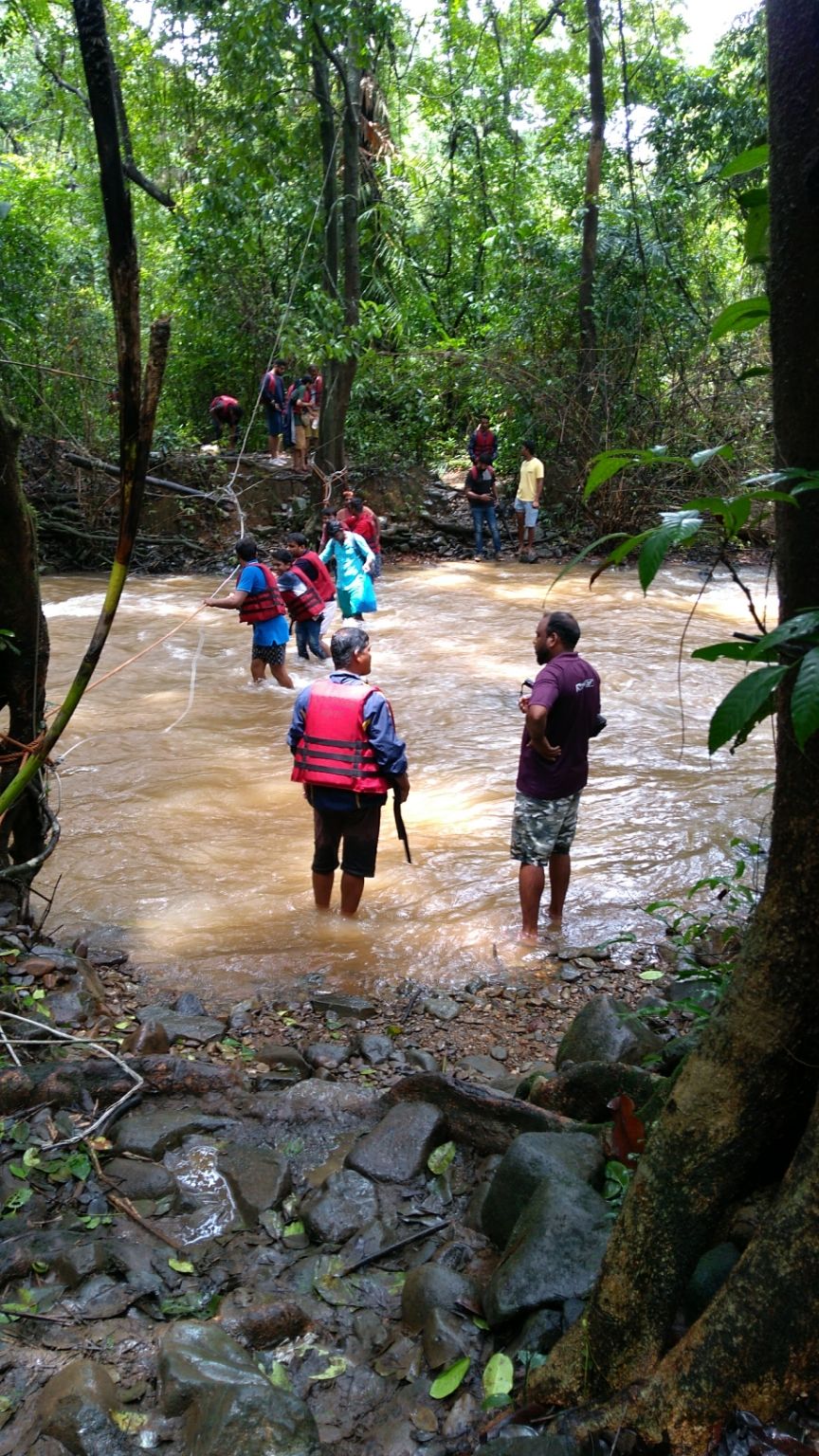 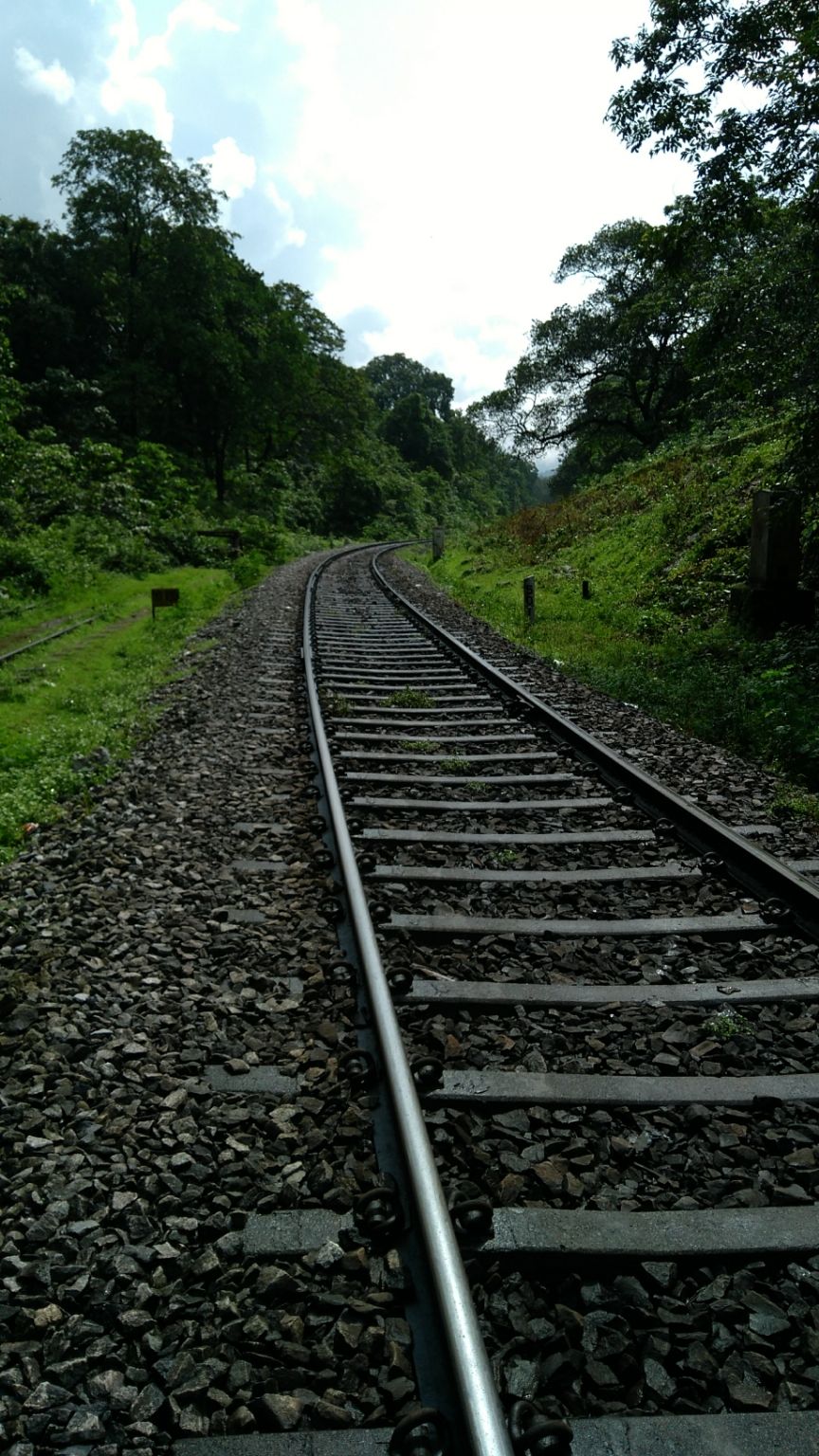 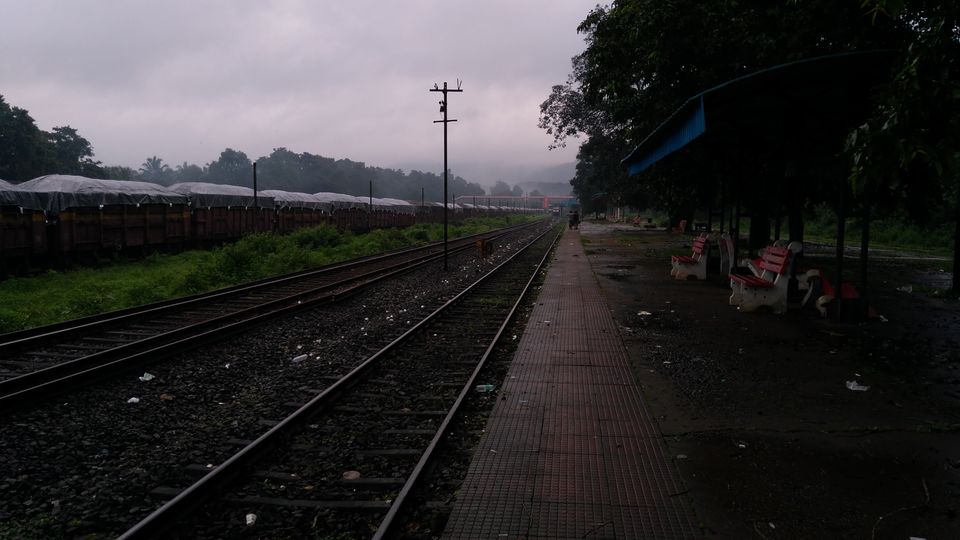 Our damp shoes and num legs 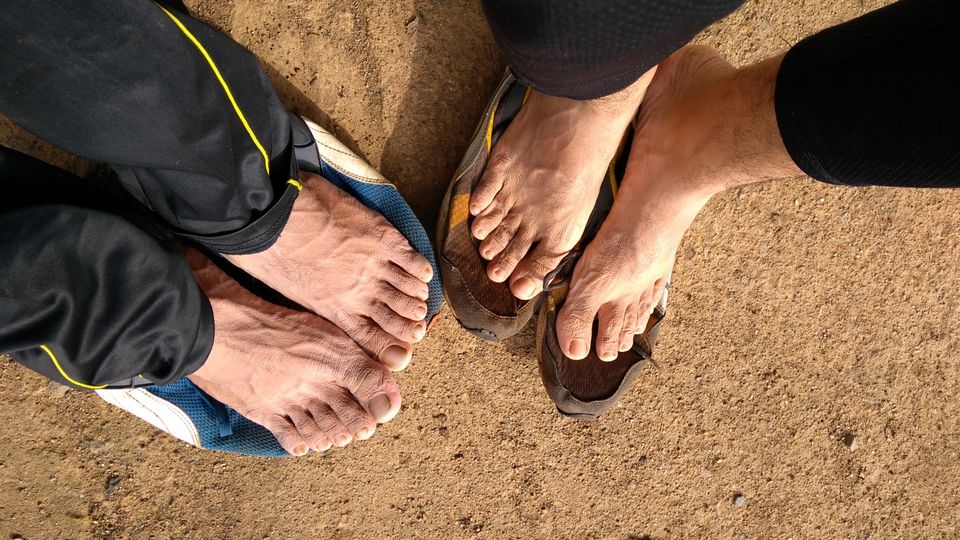