Kasauli and the rogue Himachali

If Shimla is about all that’s gone wrong with Himachal Pradesh, Kasauli is everything that’s going awry. Despite repeated warnings and notices by the Green Tribunal, the state government is in a perennial hurry to lift the construction ban on 17 green belts around Shimla considered the capital city’s lungs – and pave the way for scores of real estate developers to roll in with their earth movers and automatic lumberjacks; citizens are forced to file petitions against free plying of government vehicles along auto-free zones; dumping of untreated waste including plastic by the city municipality goes unchecked into the state’s lifeline Beas River. In the midst of this fracas, all the soi-disant ‘voices of development’ seem to have missed the connect all these might have on the state recording 40 per cent less rainfall from the previous year. ‘Drinking water ATM’ is not just a myopic solution to water shortage but potentially calumnious to the legend of ‘Dev Bhumi’: having to pay for basic aqua doesn’t augur well for any ‘abode of god.’

As you wind up the 12 km from Dharampur to Kasauli four, five even six-storied buildings dot the rolling green valley like sore grey thumbs – with all the prettiness of gigantic concrete mixers emptied out over mountainsides. Two in every three buildings along this route is a functioning homestay; the third is either an under construction homestay or a homestay temporarily closed for lack of staff. Note: Do not be befuddled by the ‘homestay’ tag many of the properties flaunt – very few of them are homestays in its real sense, save for crude amenities and raw human resource. One even had 70 rooms spread across seven floors and two levels of the main road with more being burrowed! The one which had the owner staying in the premises – the heavens, rather – on the eighth floor – or was it ninth? – was a fiasco. “Had you read write ups of my property on TRIPADVISOR you wouldn’t have come here,” he barked prompting me to put up a rare review. I usually steer clear of traducing homestays for facilities, food even, in the hope that the glitches are made up by an amiable atmosphere but had to make an exception for Guns & Roses.

In case by now you have ruled out doing a ‘Mum in Munnar’ let me fill you up on what else is going for Kasauli: The food. The ‘Pahaadi’ or mountain folks are generally great cooks without exception and there are some culinary fares ethnic to the region which you ought to try. ‘Kheru’ which the waiter said was ‘curd soup’ is a great appetiser with the cumin and coriander seeds with the red chillies handy in keeping the body warm. Rice dish Himachali Pulao had wild mountain berries in addition to the vegetables giving it a tangy twist. The chicken anardana – chicken cooked in grated pomegranate seeds – is highly recommended. I wanted to top all these delicacies with the traditional ‘Bathoo Ki Kheer’; but on the first day i was stuffed and the second day it wasn’t available. On both the days of our stay at Kasauli, we lunched at the Ros Commons HOTEL

run by the Himachal Pradesh Tourism Development Corporation. Though the kitchen is accessed from the open dining area and you are privy to the cook stepping out for his smokes or straining out his gutka, the property is among the better ones. Like any state tourism properties the rooms are quite expansive. Note: Though the ones not facing the valley are cheaper they are kind of dark like dungeons (The Ros Commons was earlier a CID office, the manager told me) and a bit mouldy. But make your reservations well in advance as babus are the ones holding the privilege cards here. The state tourism body has a robust online reservation system which came as a surprise.

Heading back to Delhi the burps were content but there were a few niggles: If tourists were so diligently doffed of their electronica citing security what about the cluster of private villas abutting the compound wall of the defence property? Swanky SUVs and dark-tinted sedans with non-Himachali registration plates were lined outside the heavily guarded gates. Native women ferried large bundles of freshly-cut grass and dragged whimpering kids in tatters with not even a glance at the opulence right in their backyard.

HotelsMap
Even then, checking into any one of the HOTELS along the Dharampur-Kasauli road is your best bet for a reasonably-priced accommodation in these parts. Mum in Munnar: A few months ago my folks drove 120 km from our hometown Pala in Kerala to Munnar, a hill station in the Western Ghats. After an early morning start they reached well before noon and by late afternoon they had covered all the half-dozen odd tourist attractions. Looking around for a place just to spend the night they decided that the tariffs didn’t make sense for a few hours’ sleep and headed home the same evening. Doing a ‘Mum in MUNNAR’ can be quite tempting for a destination like Kasauli which is essentially a weekend destination from Chandigarh or even Delhi – from where we headed. The sightseeing options are quite limited as well. The Christ Church built in 1844 is reminiscent of colonial architecture and the highlights are imported stained glass with images of Jesus, Mary and Saints Francis and Barnabas. A charming ancient heating system – now defunct – encased within an ornate iron furnace with a rusted duct for the smoke is overlooked by most visitors to the church. On a lavabo-like platform outside there is a sundial marking the time difference between Madras and ‘Kussowlie.’ 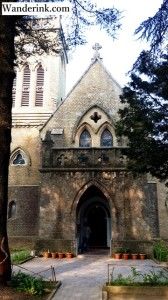 HotelsMap
Monkey Point / Man Ki Point: This is undoubtedly the biggest attraction of Kasauli though reaching it can be a bit of tedium – not least for the brisk climb as much as for the security precautions: Being on Air Force grounds, no cameras or mobile phones are allowed. Note: Leave all electronic items in your vehicle which you have to park 600 metres away from the temple entrance. Local folklore maintains that an ascetic called Man-Ki, a devout Hanuman-bhakt, used to meditate on top of the hill where eventually the locals built a temple. An engraved notification tells you that while Hanuman was flying back with the magical Sanjeevani herb collected from Mount Sumeru at the behest of Lord Ram to save his brother Lakshman who was badly wounded in battle his feet touched the peak of the hill where the pious built the temple. As with everything mythical, the versions could be different or the same – depending on the intensity of ones fervour. Other attractions in and around Kasauli include the Baptist Church, Baba Balak Nath Temple also atop a hill and the Guru Nanak Gurudwara and Sai Baba Mandir in Garkhal a few kilometres from Kasauli. The ‘Sunrise Point’ by a sharp bend along the road to the Hanuman Temple offers some neat views of the valley but parking more than one car here poses a traffic hazard. One level down from the road there’s enough privacy for a spot of canoodling – if you don’t mind the jeering monkeys. 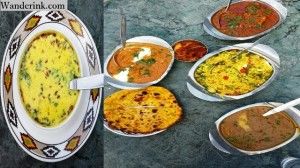