Reflecting upon scintillating & near fatal experiences during Mata Vaishnodevi visit

Visiting Mata Vaishnodevi shrine in Katra is believed to be the holiest and arduous yatra for any Hindu.This yatra was the first leg of our package tour to Jammu and Kashmir organised by Nirmala Travels, Mangalore. We were a group of 6 adults and a child ,who comfortably wanted to explore Jammu and Kashmir in 12 days. After a 24 train journey from Mangalore reached New Delhi, changed another train to reach Jammu. The train was full of tourists from all over the country traveling to Amarnath , Katra ,Srinagar.Landing Jammu at 10 am, we left for Katra that took 1 hour in a traveller

There was a long queue at the top. We had a plan that one member among us would take care of mobiles and cameras allowing others to visit the shrine ,eventually that member would visit later. But the sight of long queue shredded this thought and we got separated from gang to deposit the electronic gadgets in the locker. Later handsfree, we visited the shrine, there is a separate queue for ladies and gents. The sanctum sanctorum of the Goddess is in a long cave with a narrow opening. There is no idol or sculpture of Goddess but three 'Pindies' signifying the collective spiritual strengths of Matha Saraswati, Matha Lakshmi and Maha Kali.The 3 Goddess embody the creative, preservative, and destructive aspects of the Supreme Power. The scenery of Trikoota mountains is breathtaking.I collected the coin presented to every pilgrim as a token.

After the darshan, I could not find my husband(Pradeepji) ,nor other members of my family, without any mobile, cash , I felt helpless, hungry thirsty . This separation was un anticipated, we had never ever thought that exit points would be different. When I decided to take help from announcement desk, suddenly I spotted my husband ( due to his orange color shirt). We ended up waiting for each other in different sides of the temple.

After collecting the baggage ,we had lunch of dosa and bhaji ( service by Nirmala travels!!) .A thought came to my mind that without visit to Bhairo this yatra is incomplete. Hired a pony to carry us to Bhairo and back to Bhanaganga. Balancing the pony uphill and downhill is a delicate ,risky act, while ascending the rider has to bend down forward and while descending the rider has to bend back. Pradeepji was almost on the verge of fall from pony but I believe it is due to the blessings and kindness of Mata Rani, the pony walah held him tight. No part of his body was hurt, nervousness was evident in his face throughout the ride. Finally reached our hotel at 6.00 pm.By then my aunt and uncle had reached the hotel.My sister and her family had lot of experiences to share.

Best practices to be followed when visiting any popular temple site

Temples are thronged by more than 1 lakh devotees during holidays, it is a test to will power and patience, better to defer the visit

Always decide a meeting place outside the temple , before getting into the temple, in case the partners (members )get seperated into different queues , not finding them after darshan of diety ,the experience can be disgusting

Preserve the yatra parchi till the end of journey, it comes as an insurance cover

Note down the registration no of service people such as pony wallah, pittus and drivers 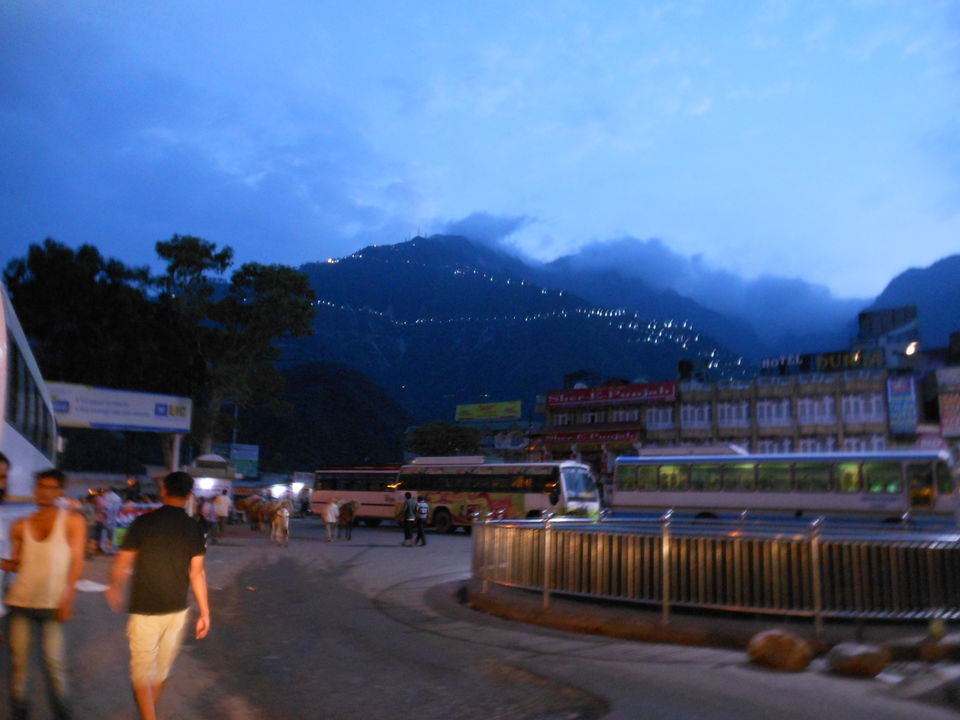 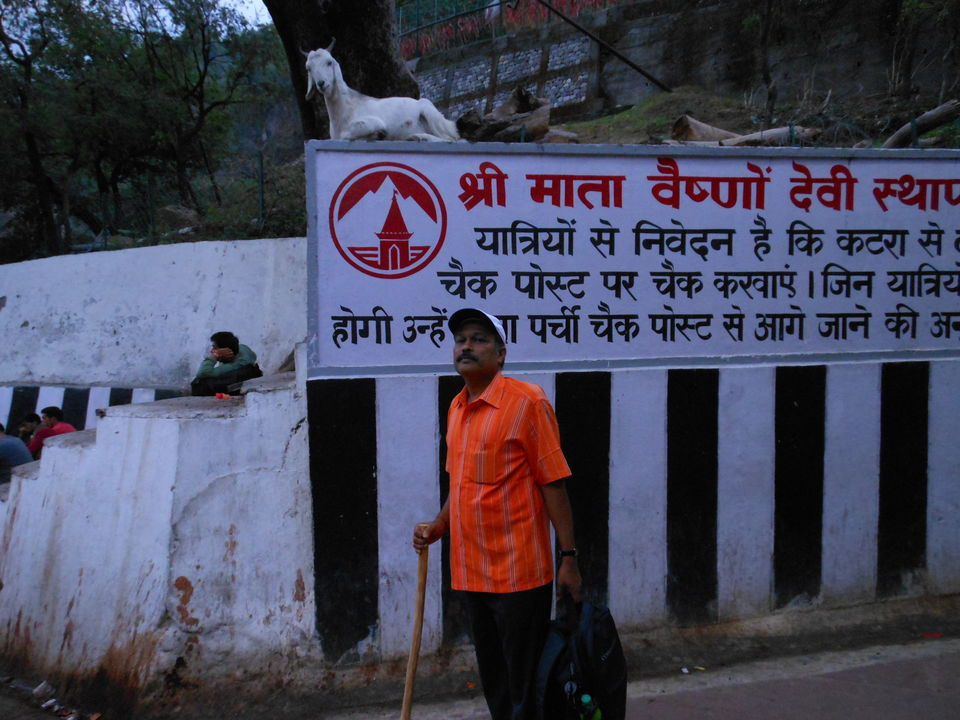 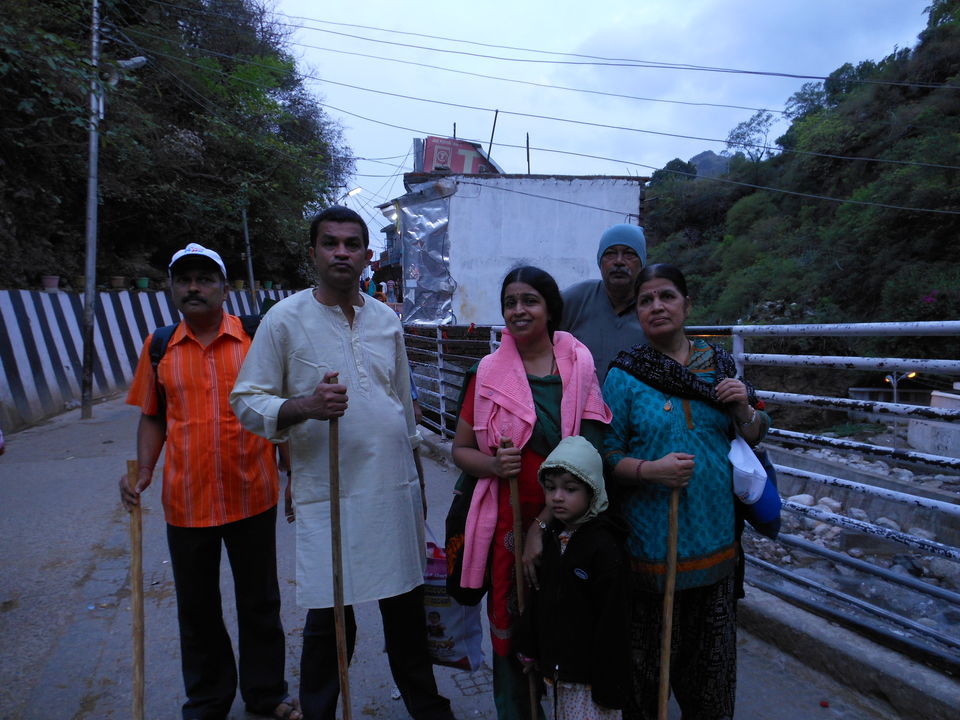 View of Katra town from top 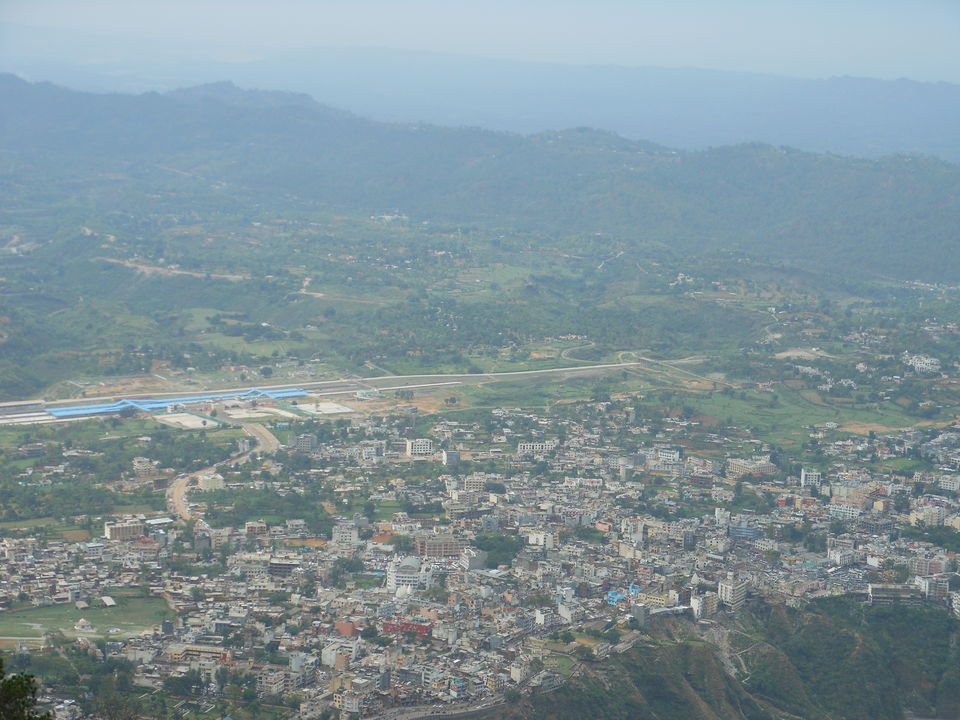 That walking stick was of great support to lean on 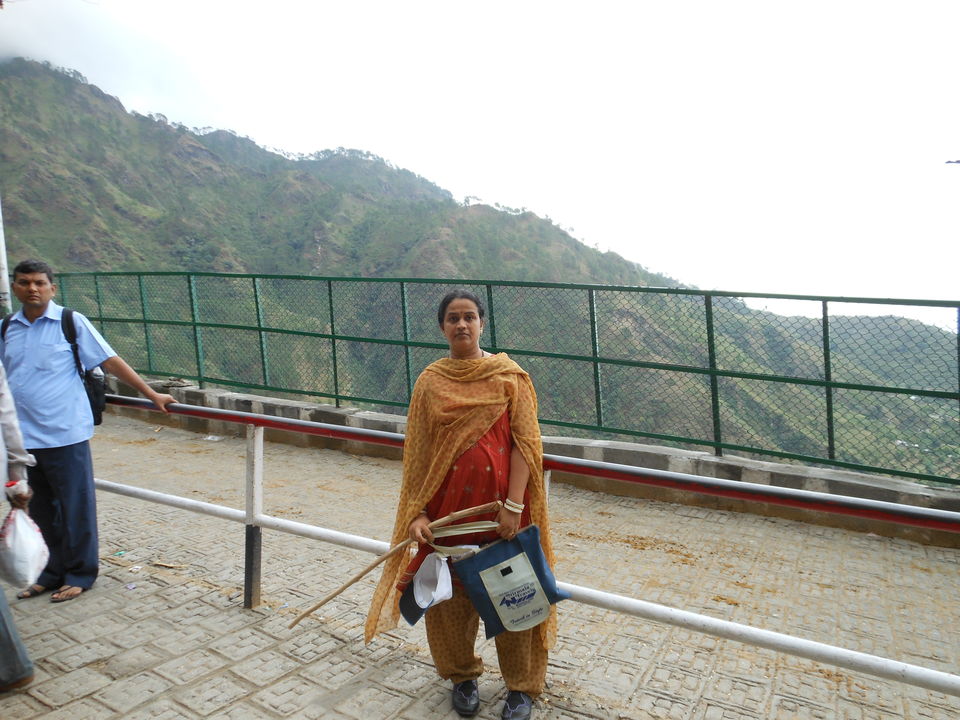 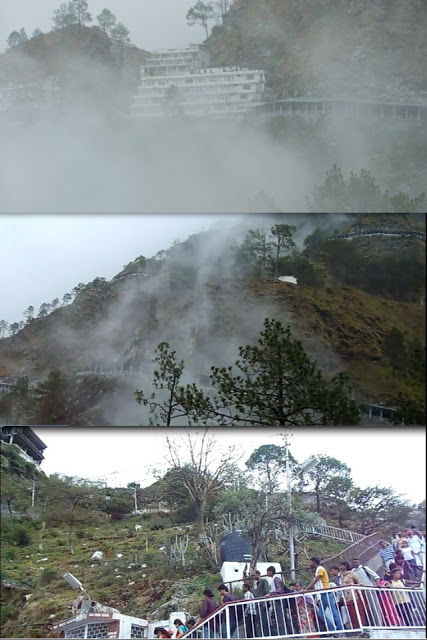 For the next 2 nights we were put up at Hotel Singh International in Katra. Our Tour guide Mr. Raviraj briefed all 40 tourists about this package, an initial exchange of pleasantries with other members gave us an idea to plan our trek for next day. Food was prepared by Mangalore based cooks. Evening we collected Bhawan Yatra ticket from Katra Bus stand, no pilgrim is permitted to the temple (even to trek), without this pass. We decided to visit temple early morning at 4.00a.m. From the town the sight of Mighty hills assuming an height of 2500 ft gave a hint to first time trekker(all of us) , that the trek is not an easy one and that it requires a lot of stamina and fitness.

We started trek from BANGANGA check post. The first 6 km of walk is the most steep one, really tough for legs. The paved trail is very busy with trekkers, ponies, palkies and shops on the side. Because of ponies poop it stinks till Ardhkumari, even though cleaning is done from time to time. Those allergic to dust may experience throat irritation after journey which may disappear in few days. From there onward last 5 km to Bhawan, there is separate ways for ponies and pilgrims, so much better and fresh air. Drinking water, snacks ,beverages , ice cream, and food is available all along the way. My sister availed the service of Pittu to carry  luggage, they also carry kids, massage legs(ofcourse at cost). On the way we ate Rajma chawal and drank cold Nestle Tea. We took rest at many points, sat on benches ,clicked pics ,it took 5 hours to reach the Bhavan