Having trekked in the Sahayadris for over a year now, Bhavini, my wife, and I had heard many stories of trekking in the Himalayas. The majestic mountain range had been a place of wonder for many years and we always wanted to explore the stunning vistas that Himalayan treks had to offer. Now seemed to be the right time, and so we set off in search of the "Perfect first Himalayan Trek". This turned out to be more difficult than we imagined. The Indian Himalayan region spans across multiple states viz. Jammu & Kashmir, Himachal Pradesh, Uttarakhand, Sikkim, Arunachal Pradesh, Assam and West Bengal. Each state has its own set of publicized treks and local gems that we wished to explore, however, we could choose just one due to the constraint of time and budget. Moreover, there are many trekking companies who organize treks in the Himalayas and choosing the right one involved doing detailed trip reviews and cost analysis, even though not much information was available especially for the local trek operators. How we resolved the problem of choice is detailed in this post. In the end, though we zeroed in on Stok Kangri Trek with YHAI - Youth Hostel Association of India.

Stok Kangri, at a height of 20182 ft. (6153 m) is the highest mountain in the Stok Range of the Himalayas in the Ladakh region. The peak summit was on my radar for quite some time as it offers a non-technical foray into high-altitude mountaineering, and it is the first peak above 20000 ft. that every mountaineer looks to conquer. However, the difficulty level of the summit climb is highly underestimated. We too would have made the same error had we decided to summit, but the YHAI arranged trek was only until the Base camp of the Peak. This, in hindsight, turned out to be good. I always thought how difficult could it be to climb mountains, after all, it just takes putting one step ahead of the other. I was wrong, it is indeed difficult. This is due to the rarefied air in the atmosphere, that makes breathing difficult. Even a nominal gradient while ascending seems to be a task, and I found myself having constant headaches whose severity only kept increasing with the increase in stress. In addition, you get hit by other symptoms of AMS ( Acute Mountain Sickness ) viz. fatigue, dizziness, loss of appetite, and difficulty sleeping ( thankfully, I never had a problem sleeping ), which makes the mountaineer's job tremendously difficult at high altitudes.

We decided to fly into Leh, as opposed to traveling by road from Srinagar or Manali. This was primarily due to time constraints. In addition, someday I wish to do the entire road trip from Manali to Leh to Srinagar, on a bike - preferably a Bullet. So flying in seemed logical. Also, we had heard that the views of the snow capped peaks, from the flight, were exceptional, and we were not disappointed, they genuinely were. Pro-tip: To get the best photos on the flight to Leh from Delhi of the snow-capped peaks, try booking a seat on the A-side of the plane. This gives the best views, without the morning sun becoming a hindrance. 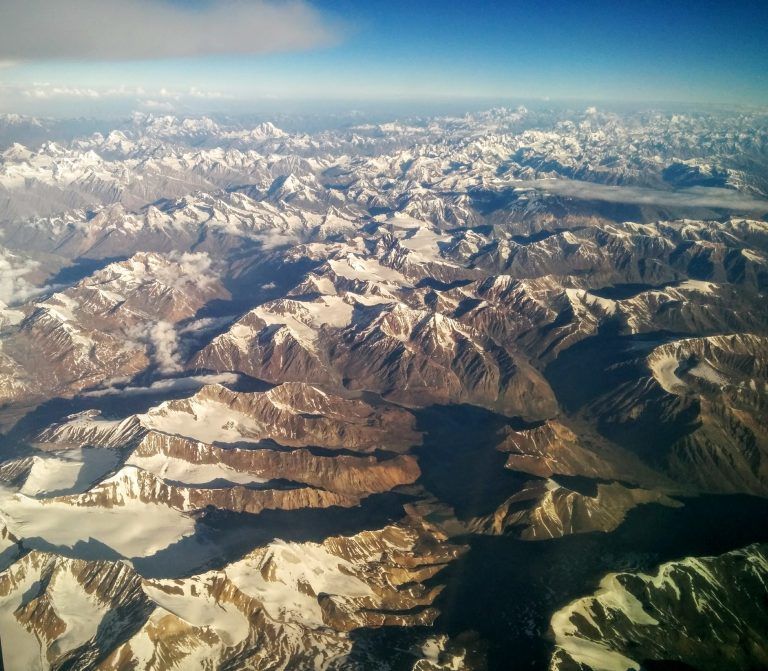 The day began at 5:30 am with morning calls to wake-up. Grudgingly, I got out of my sleeping bag at 6 am, and headed out of the tent to check for Bhavini. She was already sitting outside sipping on her glass of tea, I went to the washroom to finish the morning rituals. After having tea, we decided to go out for a morning walk/run. The morning sun, beautiful views of Ladakh, and seeing the military people on their morning run got my adrenaline running, and I managed a decent 5Km run in high altitude all the way to the Hall of Fame - A museum constructed & maintained by the Indian army in memory of the soldiers who lost their lives in the Indo-Pak wars. After breakfast, we were to go to Shanti Stupa as part of our Acclimatization walk. We were required to carry our backpacks with our blankets to make a weight of around 3Kg. The idea was to train your body to climb up with weight, as we would have to carry our own backpacks during the trek. We assembled at 9 am in the morning, and the walk to Shanti Stupa commenced. 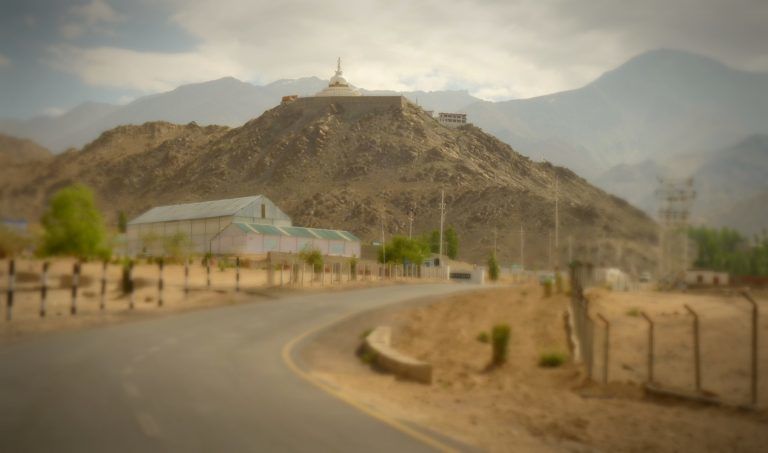 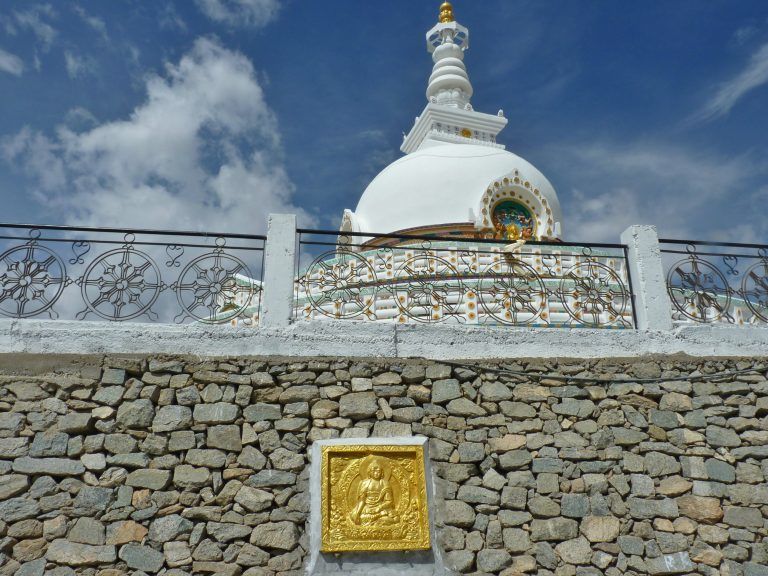 Leh palace is a nine-storeyed dun-colored structure. It is a dominant architecture icon that is modeled loosely on the Potala Palace in Lhasa. The dark and narrow walls of the palace enclose few exhibition rooms and a prayer hall. However, the best parts of the palace are the open terrace at higher levels that provide terrific views of the city. We had already seen the views earlier in the day from Shanti Stupa, but taking a few more photos didn't hurt. Since time was at a premium, we soon made our way down, and took a taxi to the basecamp, instead of walking all the way back there. 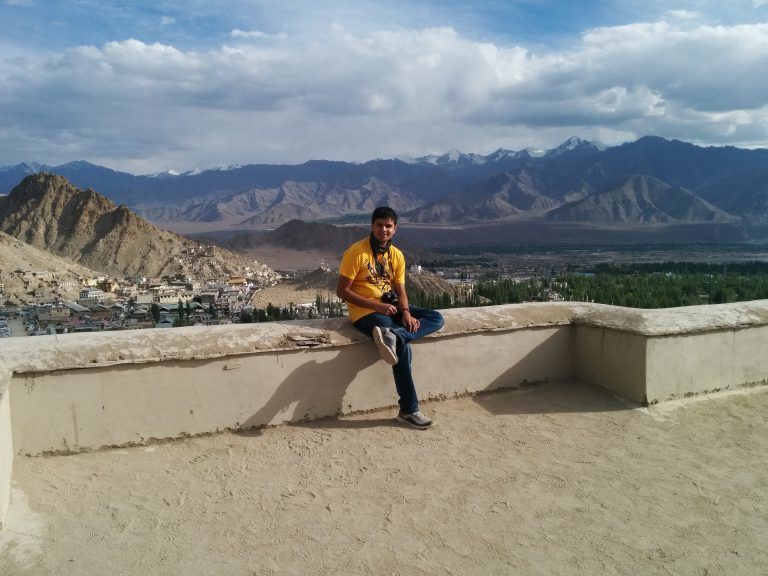 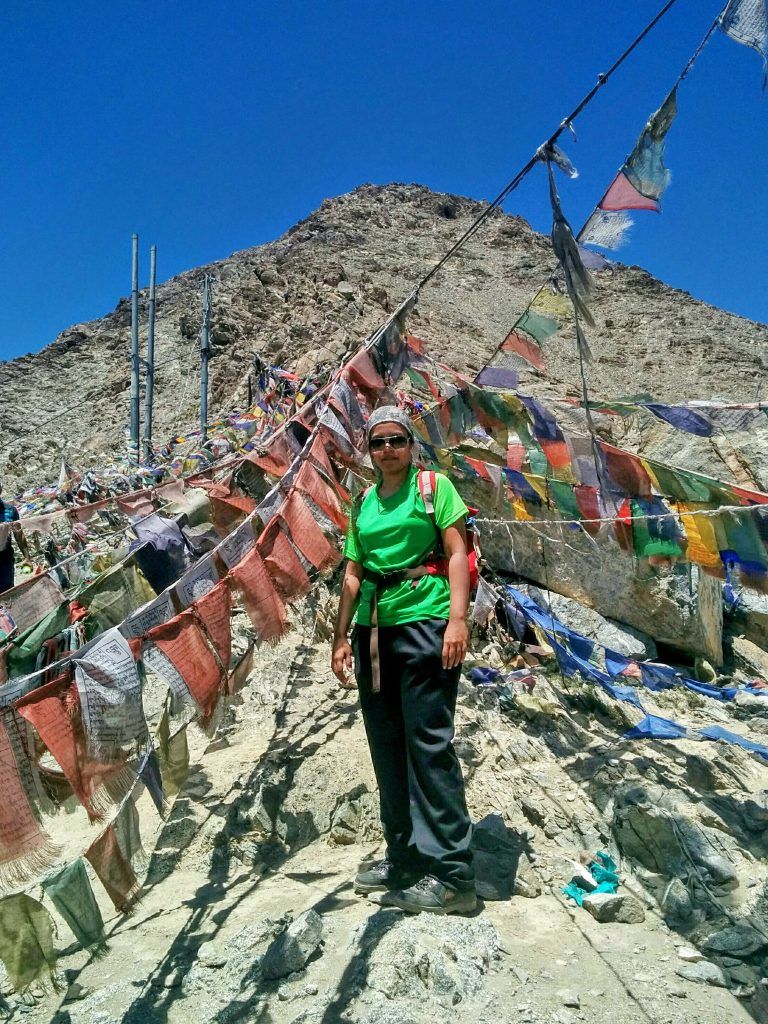 The second day started off similarly to the first day. We woke up, went for a walk this time towards Skara Market, and then had our breakfastToday's acclimatization walk was on a nearby hill. There was a tiny monastery in between the hill, but the plan was to go all the way to the top. Unlike yesterday, there were no stairs nor were there any trails. We were trekking on the rocks to climb up the mountain in a style we were quite familiar with due to extensive trekking in the Sahayadris. Moreover, our Action trekking shoes, as they provide good grip, were perfectly suited for a trek like this on moving gravel and rocks. The thin air did make trekking in this terrain more difficult than the Sahayadris. Nonetheless, we were on the top in less than 2 hours. And once there, the views were fantastic. On one side stood the airfield, and sandy hills while on the other stood the mighty Stok Kangri. The third side was taken over by the Leh city and its surroundings. We could see Shanti Stupa at a distance, distinctly below us and that gave an idea of the height we had climbed. Its peak was a tiny place, with just sufficient space to hold all 29 of us. We spent a considerable time up there clicking photos, singing songs and making Litchee squash. The climb down was trickier due to the moving gravel. Many people slipped, but not us as we had the mighty Action trekking shoes. Once down, we proceeded back to the camp for Lunch. 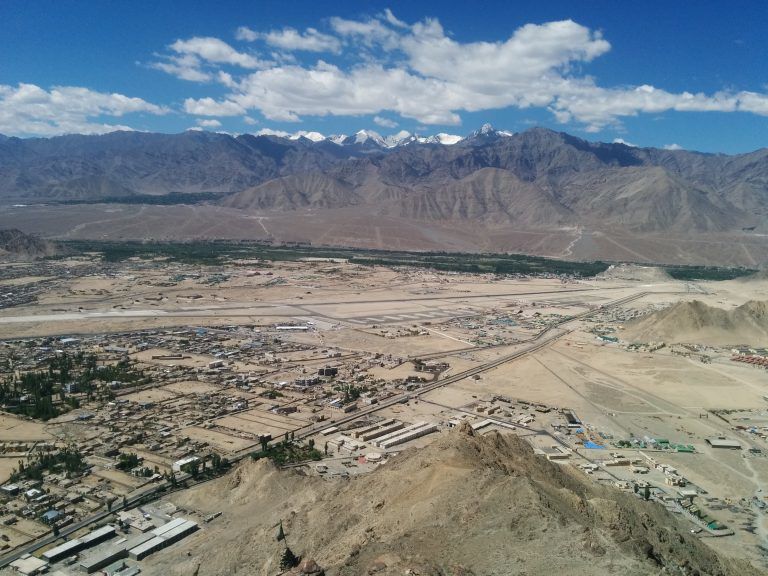 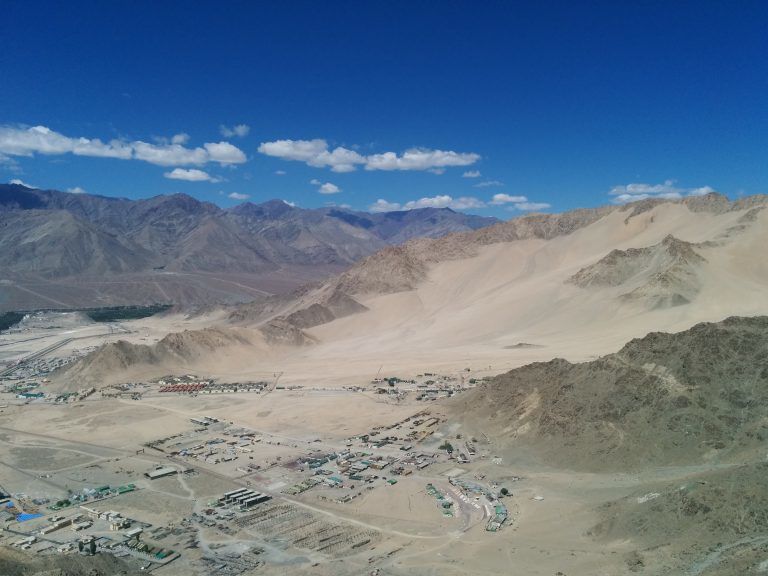 We reached the village and alighted the bus. A tiny board clearly indicated the start of the Stok Kangri trek. We followed our trek guide Tashi. In the first few steps, I knew that walking with such a heavy bag, will not be easy but now I had no option. The trail starts along a stream. Behind us was the Leh city, while in front of us, all we saw were huge mountains. Stok Kangri was nowhere visible from where we stood. Initially, I thought the tiny stream would be the Indus, but I was soon corrected. It was just one of the many streams that flow from the glaciers. We were to cross many of them during the course of the trek. This was good, as it meant that we would not require too much water to be carried along with us. We could always fill up our empty bottles from the adjoining streams. However, drinking water from these glacial streams was a challenge as the water was ice cold. Pro-Tip: One should not drink the water from the glacial streams directly, as it would cause a cough and throat aches. Instead, keep the water in your mouth for sufficient time, until it is warm enough to gulp it down the throat. This is difficult at first, but once you get a hang of it, its fun.

On the trail, we saw an ominous looking board, "If you can cross the river, you don't need to climb the pass". I had no clue what that meant. The stream was still quite small, and one could cross it quite easily. Yet, our guide - Tashi, did not seem interested in crossing it. Soon, we saw a might hill and a steep ascend to pass through it. While I struggled to make my way to the top of the hill, I could see people crossing the river and walking along the river bed. Why we crossed the pass instead of the stream I am not quite sure. However, from the top, we got some amazing photos and that was my takeaway. Good photos is a result of great effort. On the trek, it was the promise of some awesome photos, that helped me carry through many steep climbs. 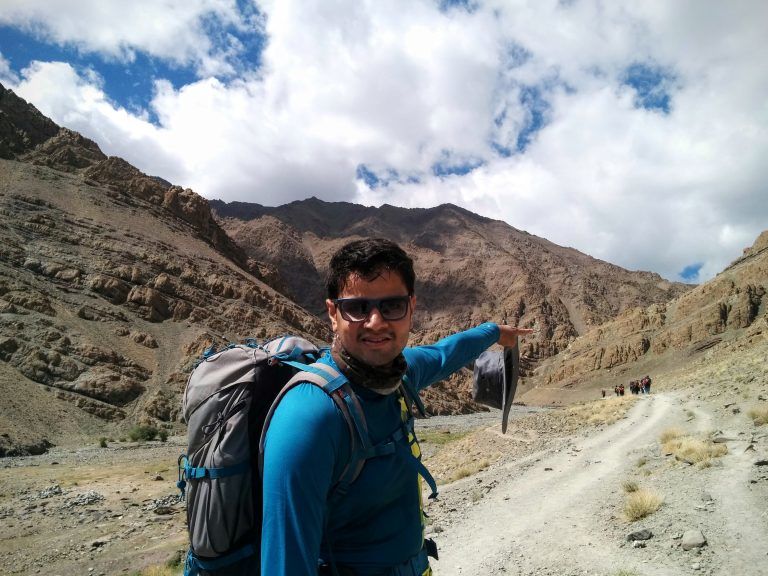 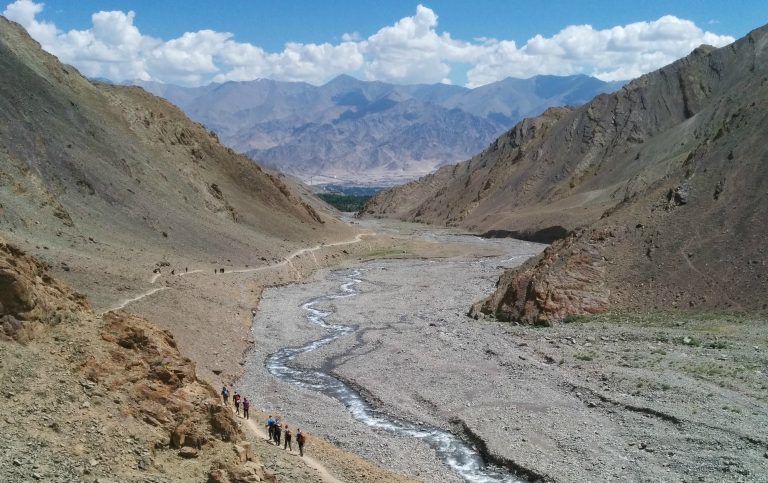 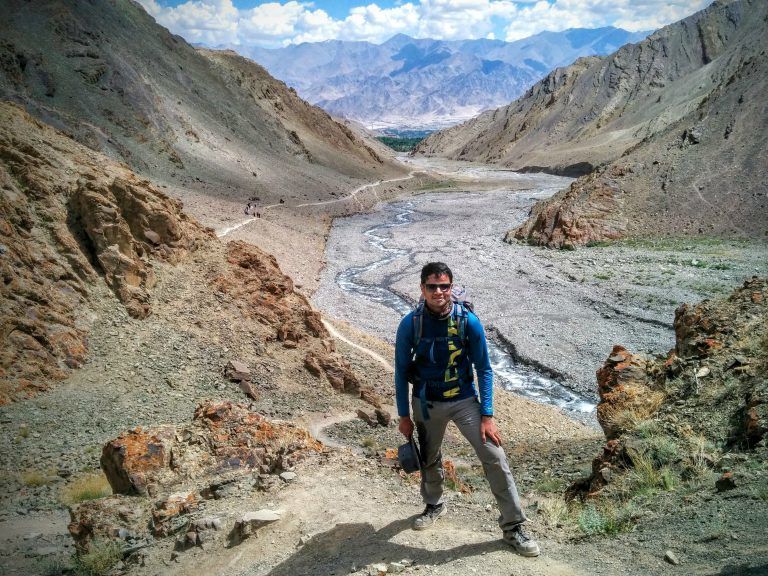 Finally, we started our journey down at 2 pm. The walk back down was faster and easier than the way up. Nonetheless, we took regular breaks and clicked many photos on the way. We reached Mankarmo basecamp at around 4pm. The soup was already waiting for us, and it was quickly followed by tea and dinner. I was very so tired that post dinner, I headed straight to the tent, where I was fast asleep by 8 pm.

The trek to Ganpoche passes through Matho pass which is at a height of 16210 ft. Then we start our descend to Ganpoche basecamp. Unlike yesterday, we would have to carry our heavy backpacks. And, we wouldn't be going along a river stream. So we needed to carry sufficient water for the entire trek. We started off early at 8 am and made our way to Matho pass. Slowly, the Stok Kangri peak disappeared and so did the Stok range, until we were firmly in between the Matho range. Because of the steep ascend, I was panting, as usual, and again we were at the bottom end of the group. 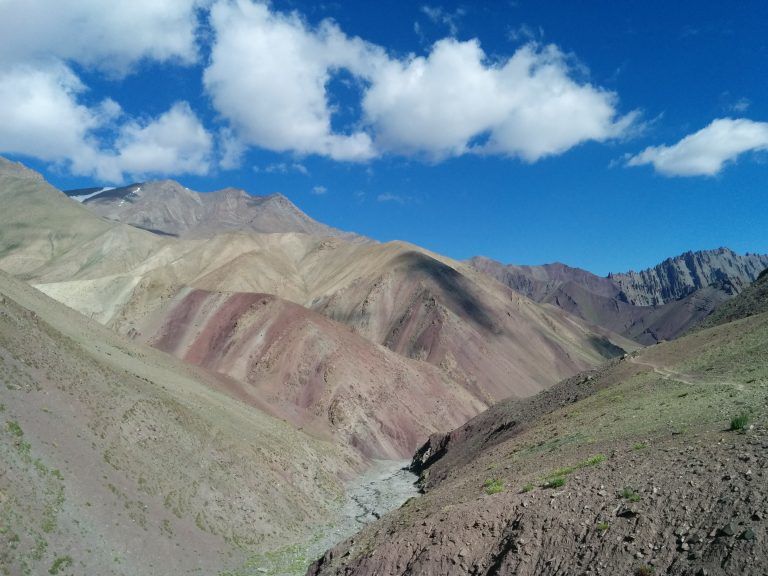 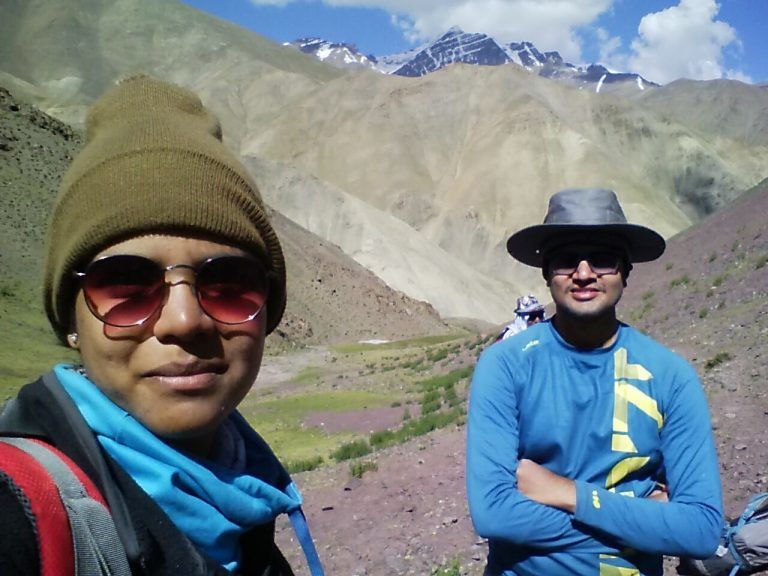 The trek started with a stroll along the green pastures. The Matho range stood on our right, with its snow-capped peaks. Again, we were behind the group, but this time, it was because I was busy taking photos, and not because I was panting. Slowly, we came across a herd of donkeys and horses near the Ganpoche village. From there, we proceeded towards a long walk that seemed to take us into the valley, and once down we were walking along the stream. From here, we had to cross multiple river streams at regular intervals. I counted at least 13 river crossings, Some rivulets were quite wide, with fast moving water and I got my shoes and socks fully wet on the way. However, we were descending, so the wet shoes did not bother me much. We collected lots of pebbles along the way, and in general, we passed through awesome landscapes that were unlike those that we had passed on the previous days. 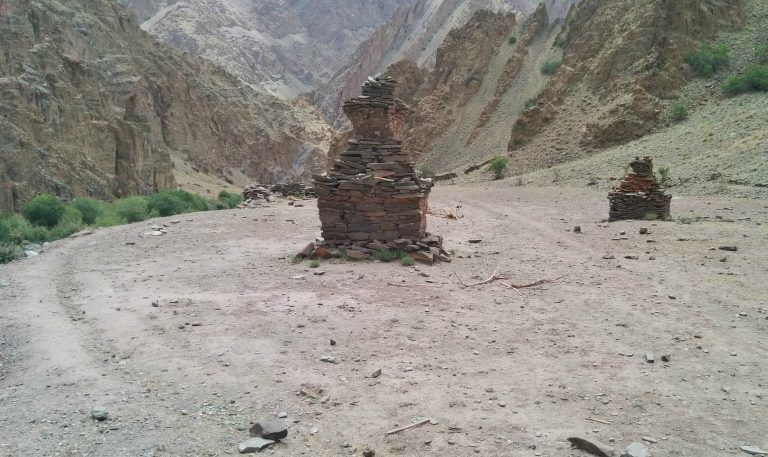 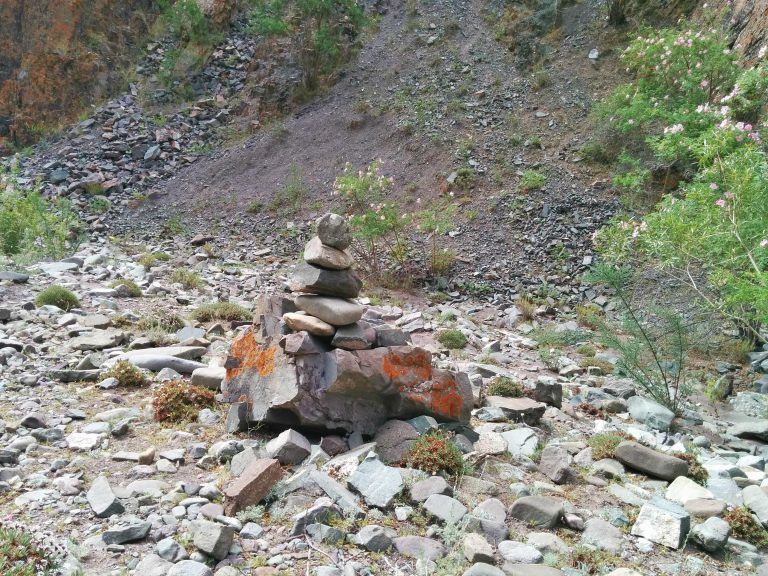 The trek, though, was really long, and towards the end, it seemed never-ending. Moreover, we were hardly taking any stops on the way as Tashi was afraid that the water in the streams would overflow, making them difficult to cross. So we walked non-stop for over 5 hours when we finally stopped for lunch at 12 in the afternoon. After a short lunch break, we again continued and reached Matho village around 1:30 in the afternoon. There a bus was waiting to drop us back to the Skara base camp at Leh, bringing an end to our epic journey. 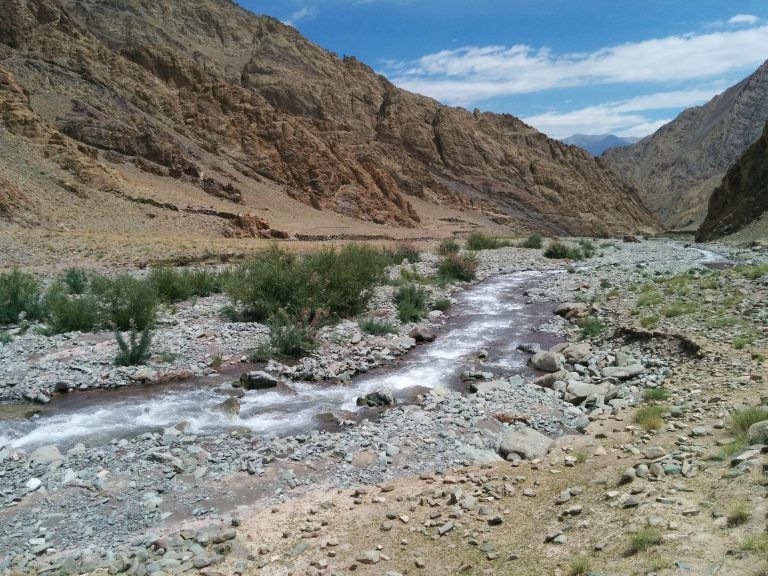 This blog was originally published on Shoe Bytes. To get more travel stories on India and info on us, please visit our website and join us on Facebook.