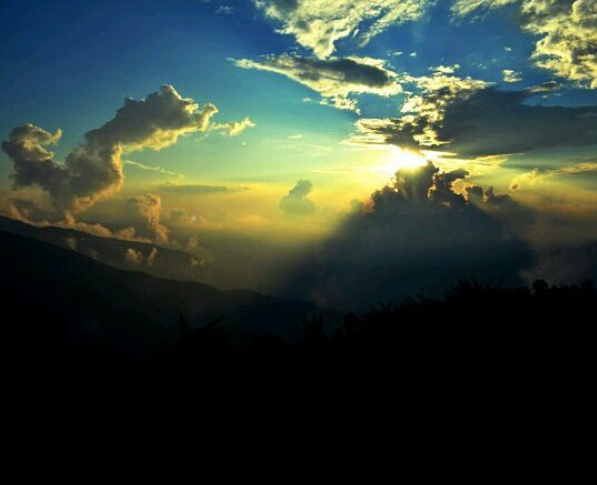 "Sometimes it's the journey that teaches you a lot about your destination."

One such journey was to a weekend trek to Nag Tibba in Uttarakhand with Indiahikes. It was a promise I kept every year to make a visit to my true home "The Himalaya" when I first started my Himalayan trek ventures. After my brother's accident I couldn't make it to the mountains with the group I had been trekking for 4 years then. I decided to keep my promise and looked up a short trek in the mountains where in I found Nag Tibba - A weekend trek.

Without a second thought, I booked myself with the group and was relaxed rather overwhelmed to know i'm going back to the best school to learn my lessons of life. Where my heart kept pounding louder because it was the first time I would ever travel alone, I realised if I wouldn't leave the very evening I wouldn't make it for the trek.

It's a boon to be a little experienced because it helps you pack your travel bag in a jiffy, at least . Rucksack up on my shoulder, I went to the station looking for a train to Delhi. Standing in the long queue, convincing myself to keep my expectations to the least level possible I decided to book a sleeper class ticket. No AC wouldn't be so bad after all I thought. "Haan bolo kaha ki ticket du?" enquired the rusty old uncle, sweating and hoping I would answer quick. I replied,"Delhi ki ek ticket, abhi ki chaiye." He judged me for a good 5 seconds and replied, "General ki milegi." Having no idea what's a general ticket I bought it which costed me 350 rupees only.

The 18 year old excited little adult in me was dancing at the peppiest songs that my heart played with every beat and the mature side was scared by all the reviews it stored about the big bad world out there. The train was here and I had no idea what I was heading for. Could you imagine yourself in a Virar local for two days? Well that could be a close enough comparison for the state in the train. Crowded with people - a chaos. A chaos with a strange harmony where we would adjust and rebel heading to the same destination. On reaching Delhi the adventure began in the real sense. My train was to Dehradun and it as an overnight train. Yet again the general compartment.

My longest night. I was all tired and restless by now, just wanting to reach the base camp as soon as possible. The train was heading to Dehradun but a strange man walks up to me at 2 am and tells me that the train would split into two and one end will head to Chandigarh and the other would head to Dehradun. Yes, it felt just as crazy as it sounds right now. A good 10 mins of convincing myself that the man means no harm followed by a panorama of thoughts, I got off the train and ran from the last compartment to the first one racing against time. Once I reached there, the people weren't sure which part of the train heads to Dehradun. Completely exhausted by now, I was almost in tears and was sure I wouldn't make it for my trek. Right then, an uncle walking up to me with a big smile tells me, "koi nhi bache mei hun na. Dehradun pohcha hi dunga aapko." His words and that big smile just made me feel a little better somehow. He introduced me to his friends (around 10 of them). My eyeballs popping out, I didn't know how to react after getting to know who they were. He told me they were commandos from the Kargil War!!

The rest of the journey went in listening to all the stories from the war, right from strategies to deaths and bravery which stayed constant. They were heading back home for a short vacation and then leaving for Kashmir, yet again to ensure to give us a peaceful night's sleep. They bid me farewell once we reached Dehradun. The smile couldn't get off my face for they told me how proud they were to see a little girl travel in the general compartment and be so brave. Their stories inspire me and the journey was a lot more than I could ever ask for. A weekend trek journey gave a lot more memories and lessons than any another trek could ever offer.

Sometimes it's not the journey you need to fight out but the fear we build in our minds about the big bad world outside. This trip was all about the journey and not the destination. A journey of self discovery and the beautiful world outside filled with amazing people and inspiring stories. Step out of your comfort zones, that's when you would never run out of stories.