The realm at zenith 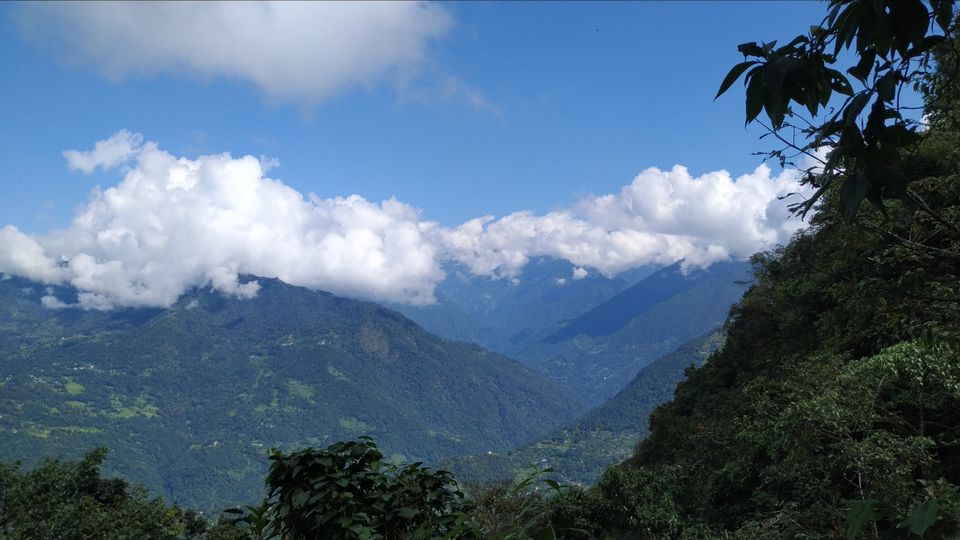 Work targets,  aedes invasion, family fatigue nothing could stop the grand gathering from happening. They met,they hugged, they boarded the train and  they looked forward to what they were planning for last six months.

Darjeeling mail took us to New jalpaiguri (NJP)railway station as per the scheduled timing. The car that will stay with us for  the entire 4 days of our tour was already booked. But, the excitement of 16 eyes could not find it. It finally arrived at 12:00 pm 4 hours after we reached NJP railway station. The 8 heads, tired and exhausted were not interested in questioning our pilot anymore. They wanted to reach the destination.

The view made us forget the delay. We took sevok road crossing the boulevard of dreams(not broken). River Tista Joined us in our journey. We stopped by kalimpong and had our lunch. Tried the famous Thukpa and were pretty much pleased. Our journey continued.

our first hotel was booked at ARITAR(NEWAA RESORT). After a round of hairpins in a lonely dark route we finally reached our hotel at 6:00 pm which turned out to be a homestay. A warm bath followed by a great dinner (roti, sabzi,aanda bhurji, and some local pickles) took all the fatigue away. A beer each ended the foggy night perfectly. 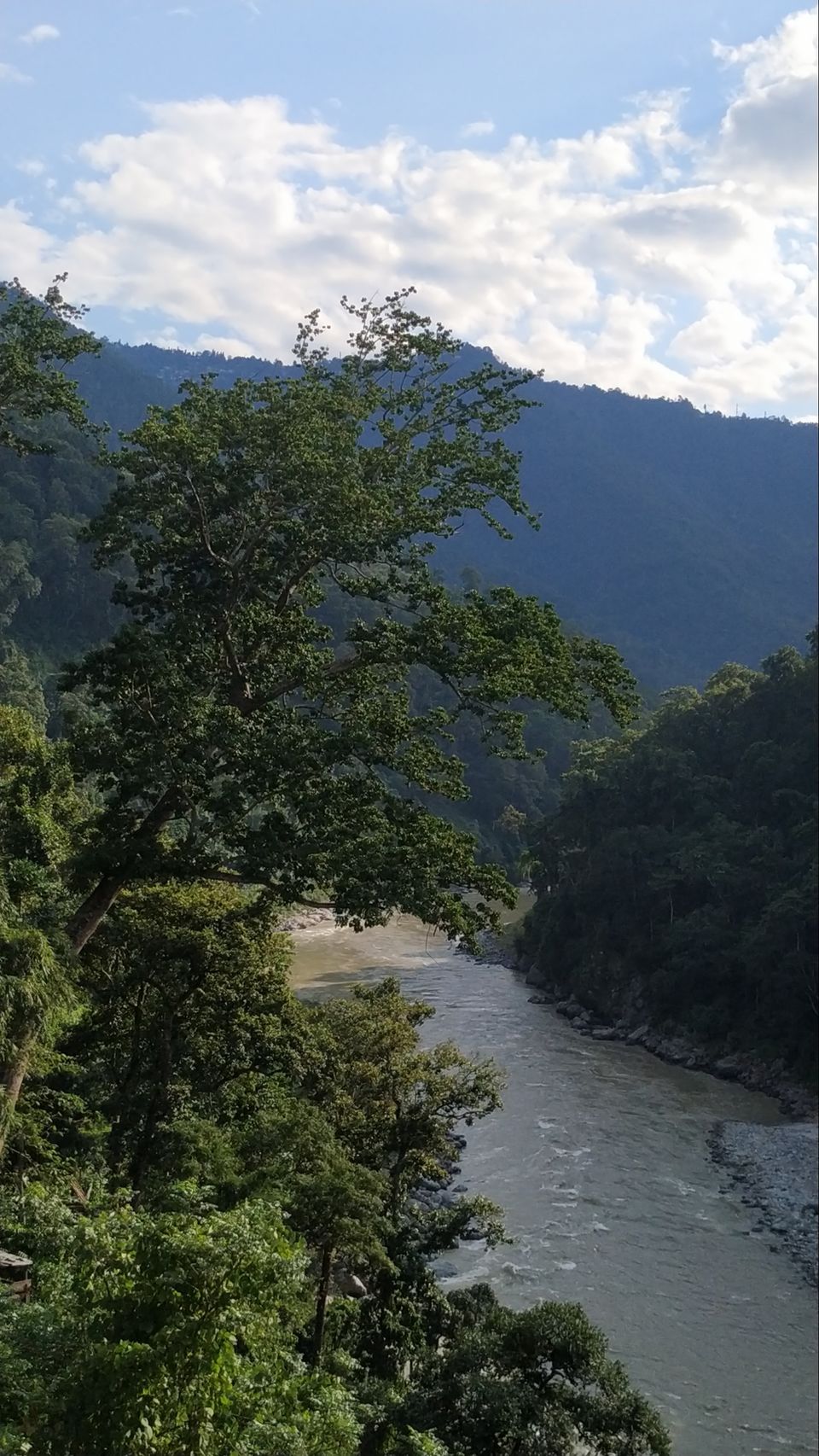 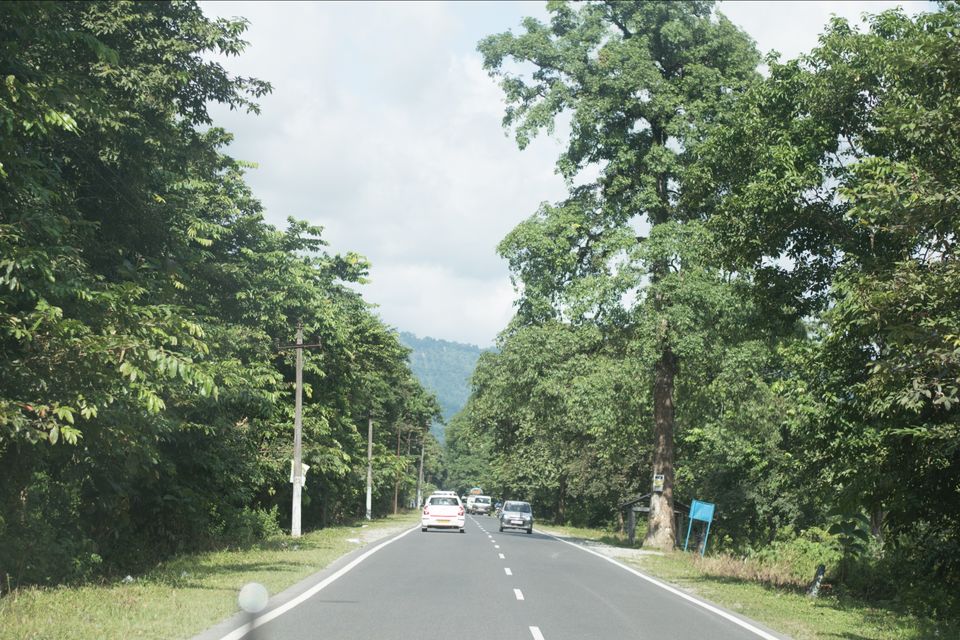 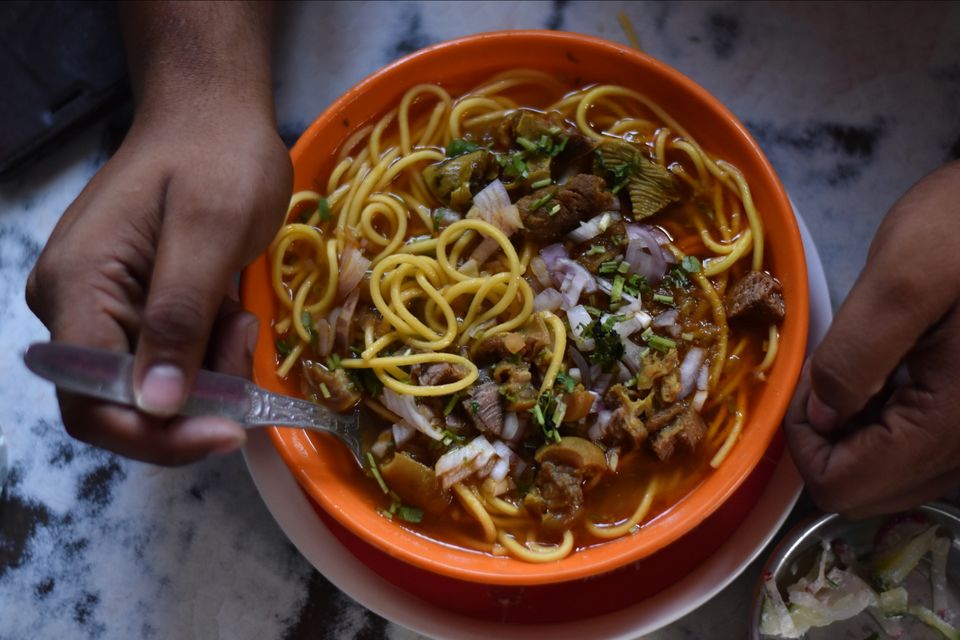 a loud cheer from one of my friends woke us up. But, it was worth it.We were seeing a range of hills with a bed of clouds in their laps.It was something different something that none of us expected. we could see the sun coming out from behind scattering the clouds like an old man shooing little children playing outside his house.

We left the homestay at 9:30 a.m. for sightseeing at aritar. We went to ARITAR LAKE. After boating, we went to trek to MAKHIM VIEWPOINT from there. It was about 200 metres of trekking. The narrow alley was slimy because of moss and rainfall and it was quite a journey while returning downhill.

our next stop was at NATHANG. We left aritar at about 11:00 a.m and left for Nathang. Little did we know what we were about to experience.

We went to rongli at first to get the permit for nathang.

The journey along SILK ROUTE commenced. A total of 32 bends crossed our path to nathang. Some might find it nauseatic. But the view from above is an unique experience. Almost half of our journey were through the ribs of the clouds leaving us shivering.

We climbed up more from 4200 ft of aritar to 11200 ft of THAMBI VIEWPOINT at ZULUK. We could only gaze and gasp in awe at what we were seeing. If there is heaven somewhere this is it.

we climbed more upto 14200 ft, we almost reached  the highesr road of the mountain. The green mountains were nowhere to see. We could now see red flower beds along the mountain valley.

We reached our homestay(PINASHA HOMESTAY AND DAFTER BUNGLOW, 9474648767). It was 1 degree centigrade outside. We had coffee and pakora.and did not left our blankets until dinner. Had yak meat and chicken for dinner. The silent darkness echoed our singing and dancing. The only thing threatened to challenge us was a small generator (used as there was loadshedding in the whole area because of rainfall downhill)But the kinetic energy was not able to produce enough heat to battle out the cold night. 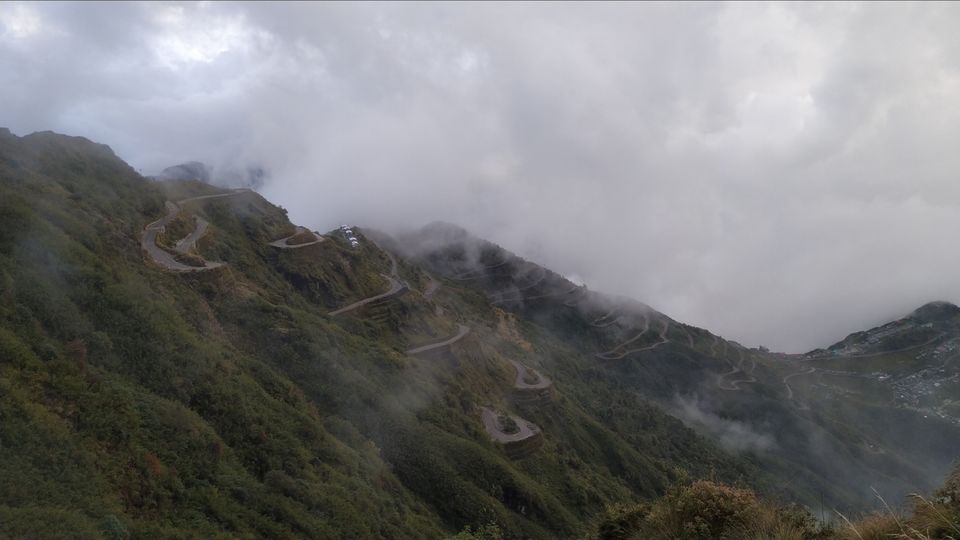 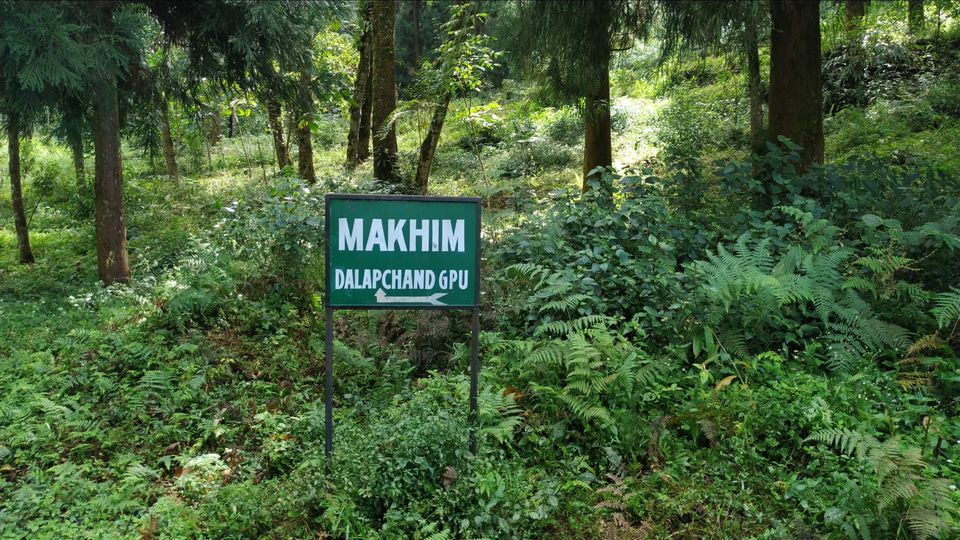 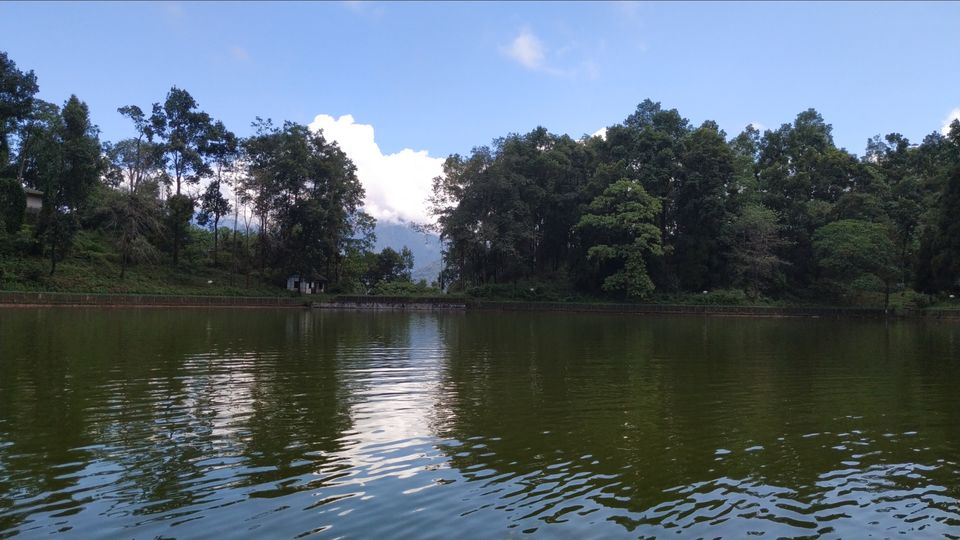 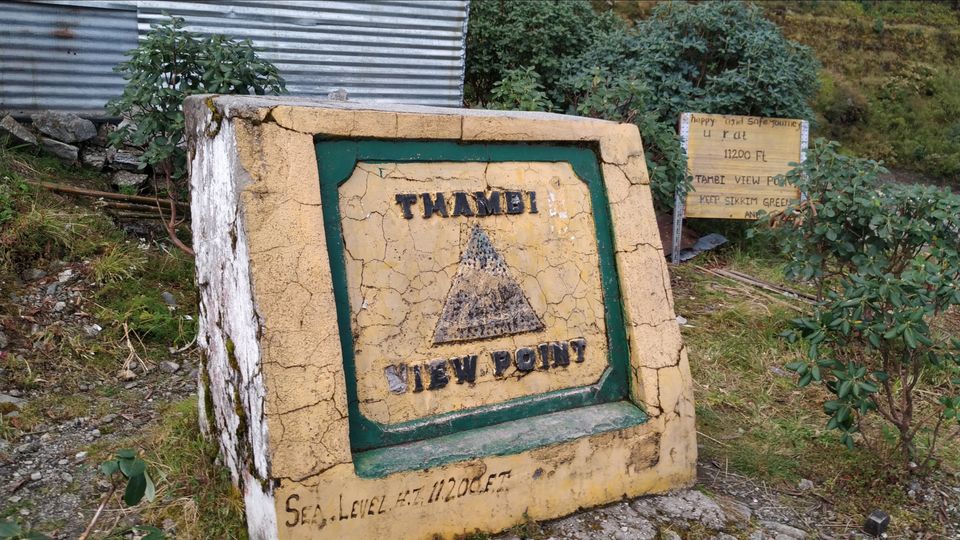 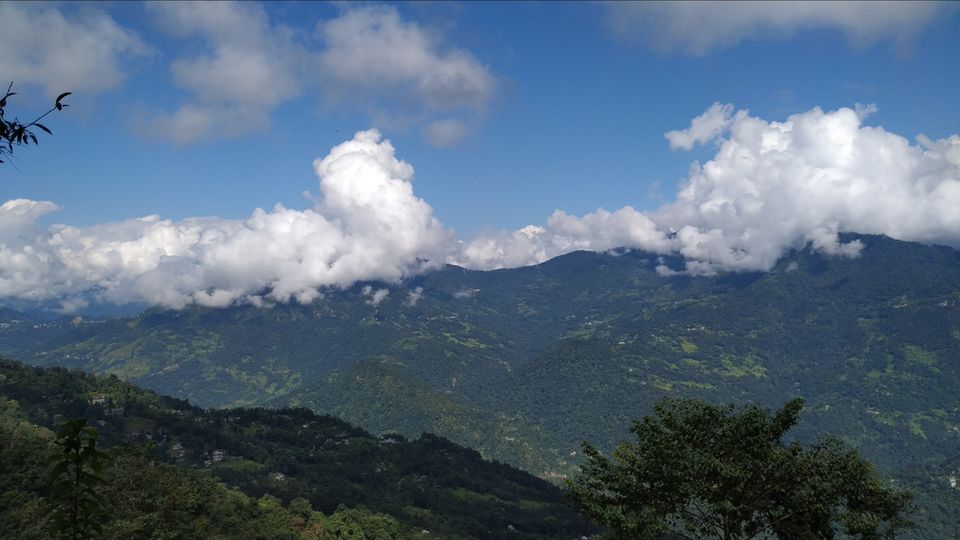 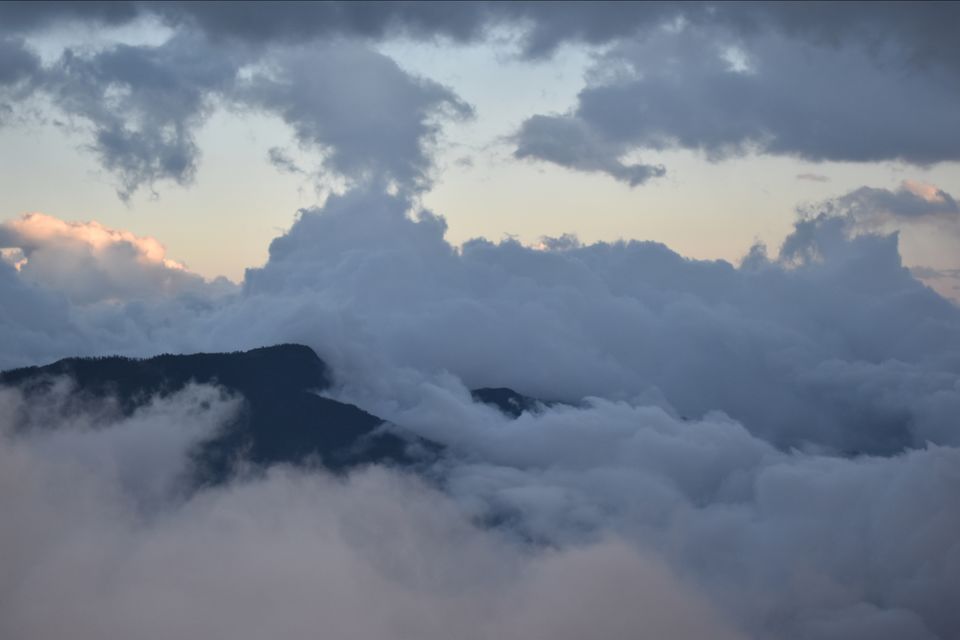 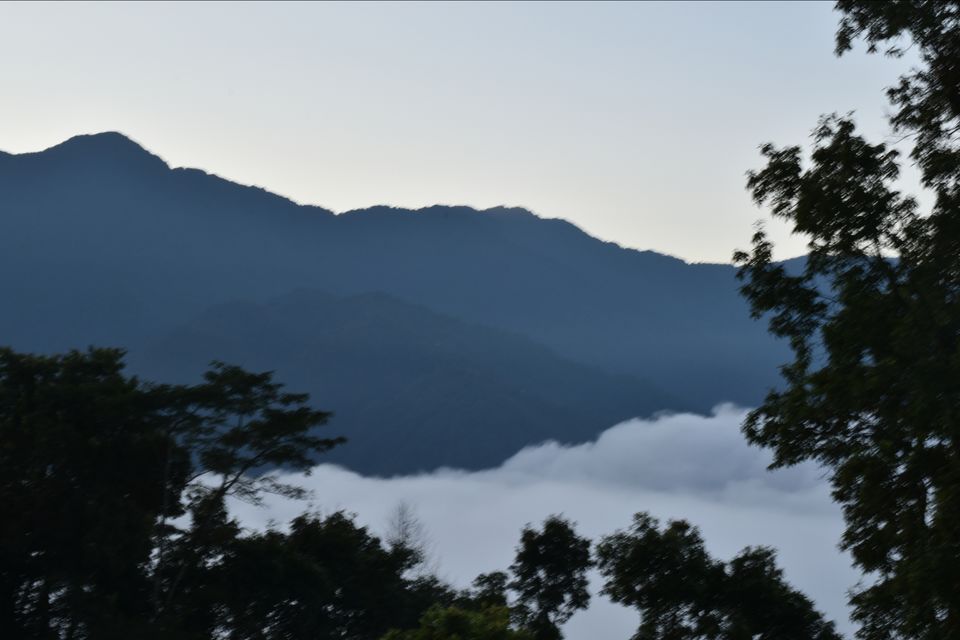 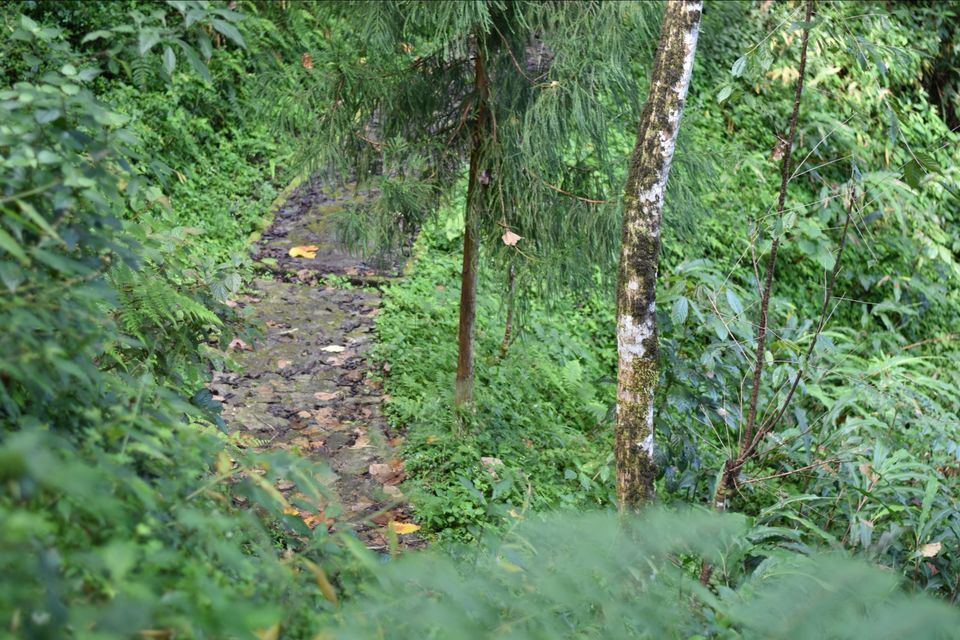 We started early next day at about 7:00 am. For sight seeing at nathang. We countered a series of lakes. ELEPHANT LAKE, KUPUP LAKE and then TSOMGO LAKE.

First we stopped at OLD and NEW BABA MANDIR .( temple for baba harbhajan singh martyred at 22 year of age. The myth is his ghost still exists and he is always on duty keeping fellow soldiers awake and aware).At new baba mandir there was a Cascade.Beside it was a giant idol of lord shiva.The whole set up was a replica of Hrishikesh. We went there, trekked a little. The air was a lot thinner there left us gasping.

Next we stopped at TSOMGO LAKE. Rode the ropeway which took us from from 13200ft to 14400 ft. The sky was clear the whole morning. But slowly the cloud resumed gathering out of nowhere and we were engulfed by them within minutes. The shivering wind took us by surprise. The opposite side of the ropeway was only mountains but no roadways.We trekked a little up the mountain and found an old base camp. We took the ropeway again and came back. A herd of yaks were standing and people were riding it. But we thought it was quite overpriced and decided to skip it.

Next, our journey towards Gangtok started. With the road being well maintained we reached gangtok within 1:45 p.m. and checked in our hotel at children's park(BROTHER'S GUEST HOUSE, 03592 202091 ).

We went to Market to have our lunch. The mal of gangtok was at M.G. MARG. No vehicles were allowed there and we were moved by it's cleanliness.

We had our lunch at restaurant Bonfire. Tried momo, BBQ, Noodles and the national dish of Bhutan: Ema datshi. Ema datshi was quite interesting. we completed our lunch and returned to our hotel which was just 5 minutes away from market.

We enjoyed the warmth of gangtok. It was 19 degrees there. We went to shop in the evening and completed our dinner there. People here sign off very early at night unlike kolkata.

It was amazing how they turned the challenges of the mountain into a well built well paced beautiful city. 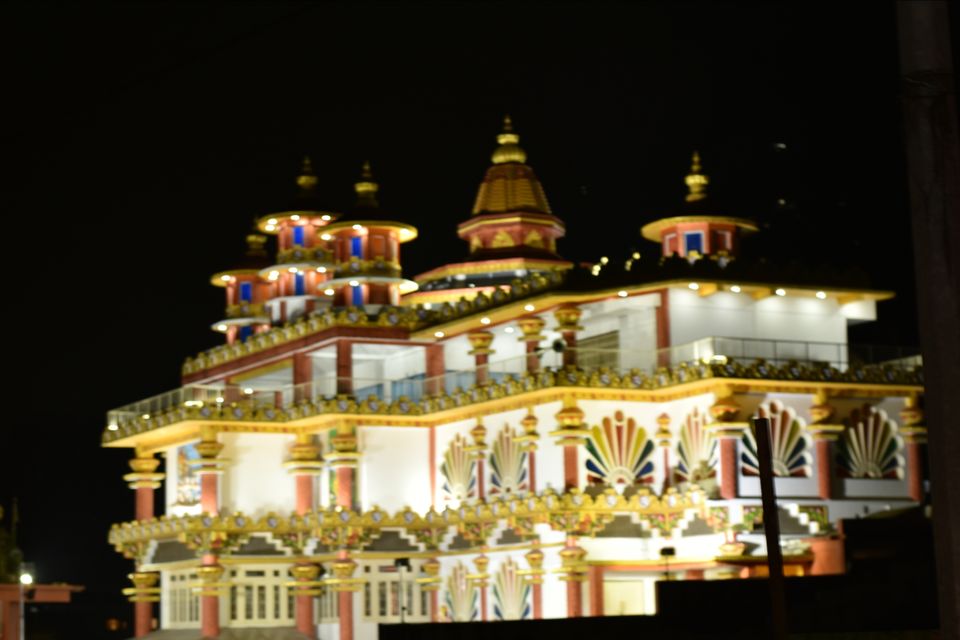 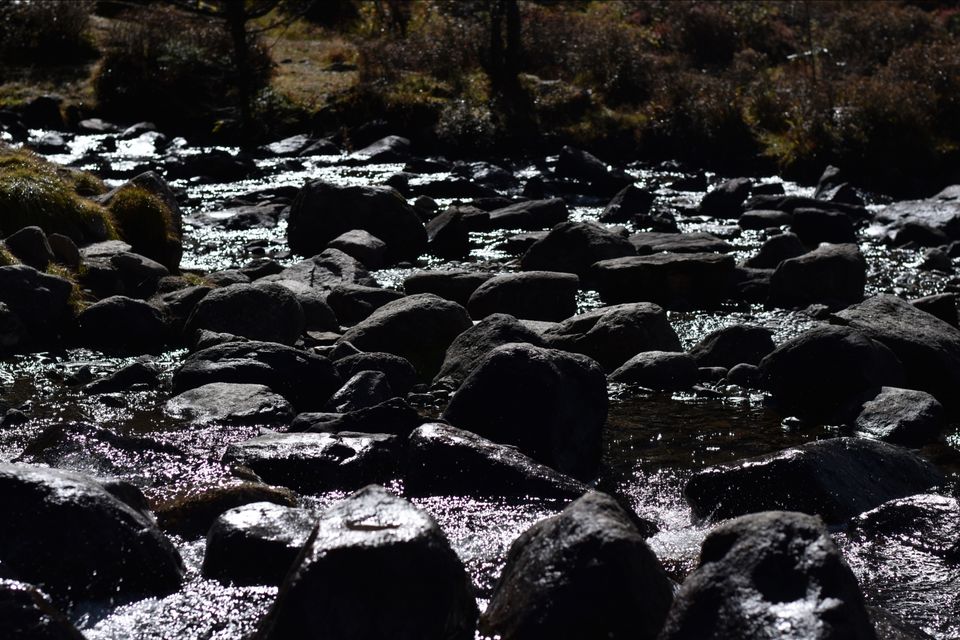 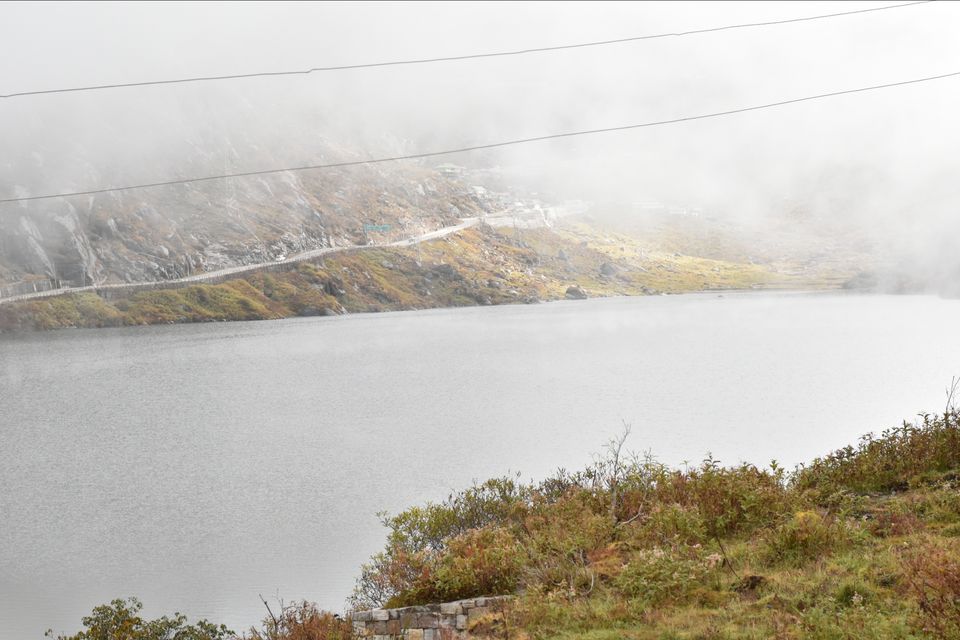 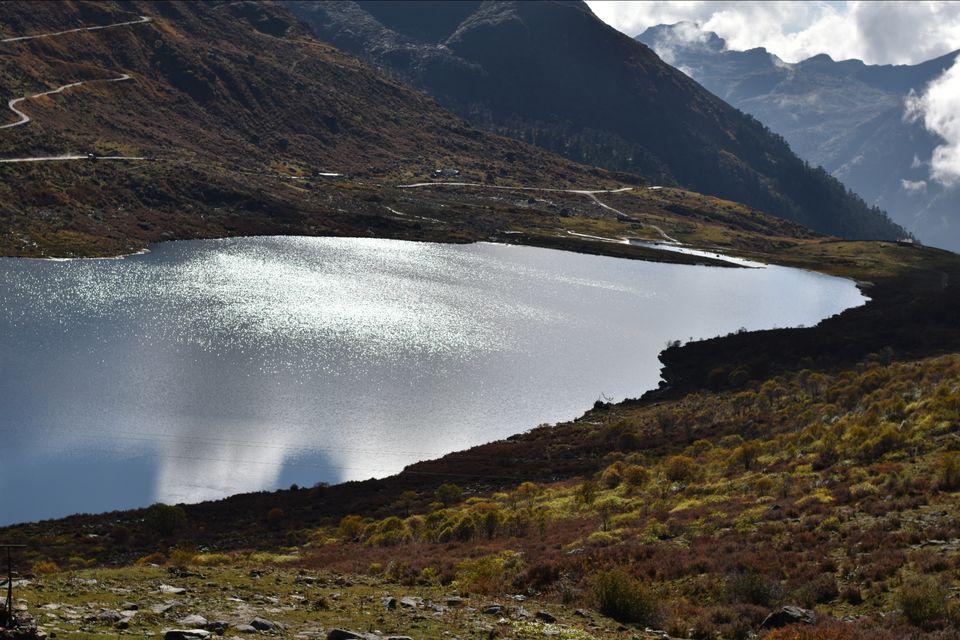 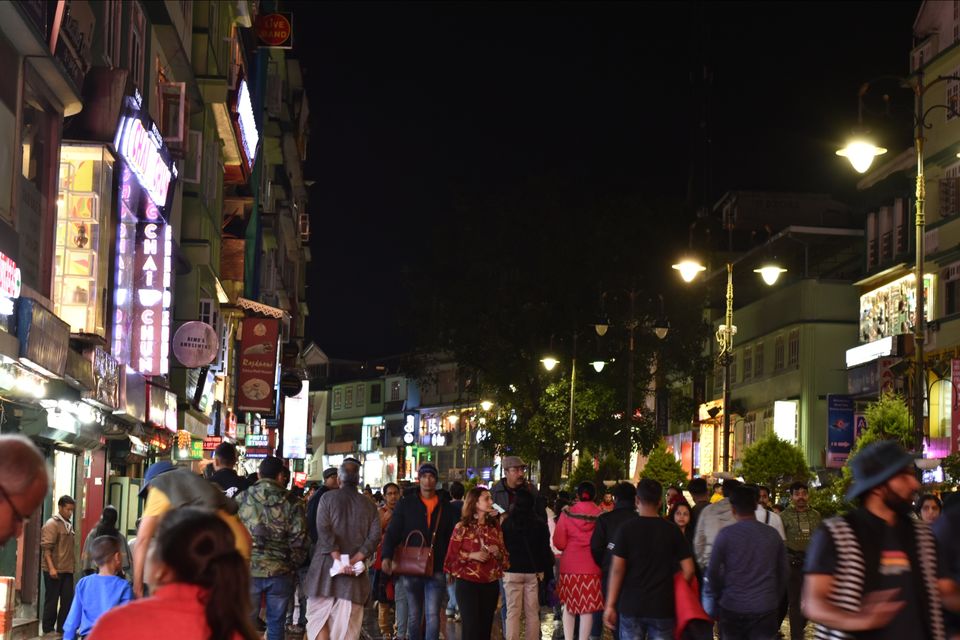 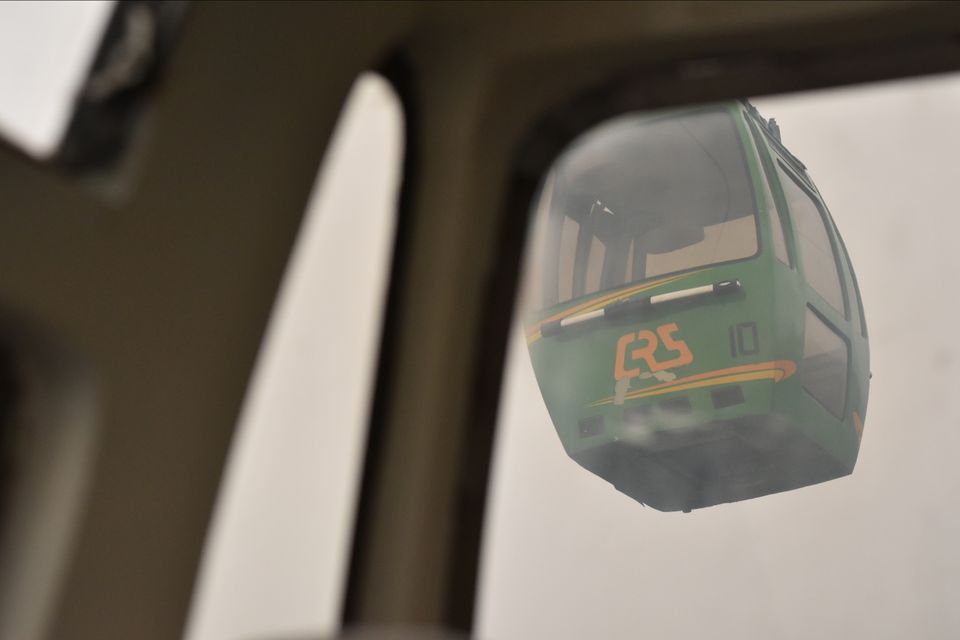 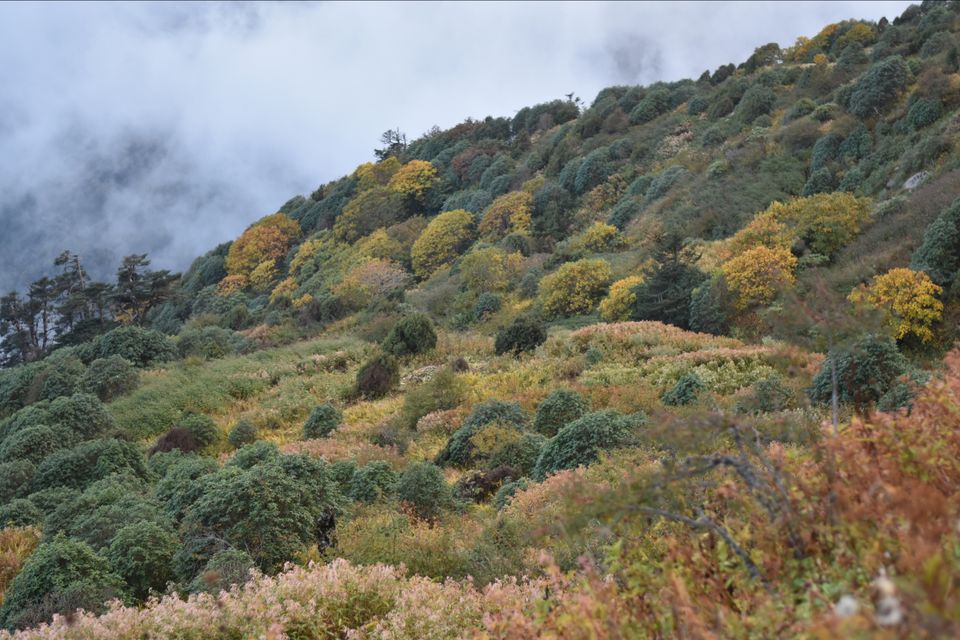 The other side of ropeway at tsomgo lake. 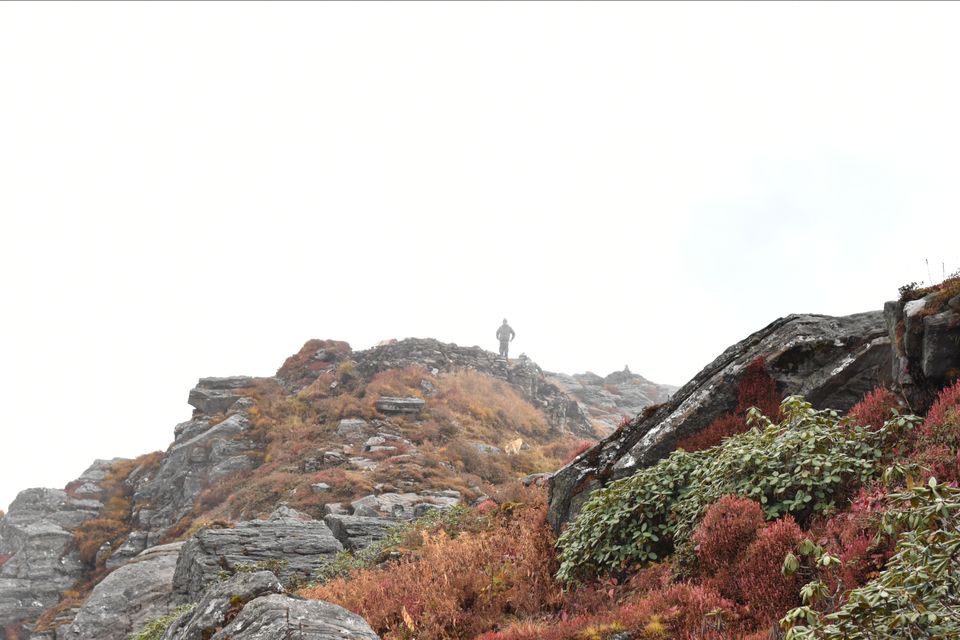 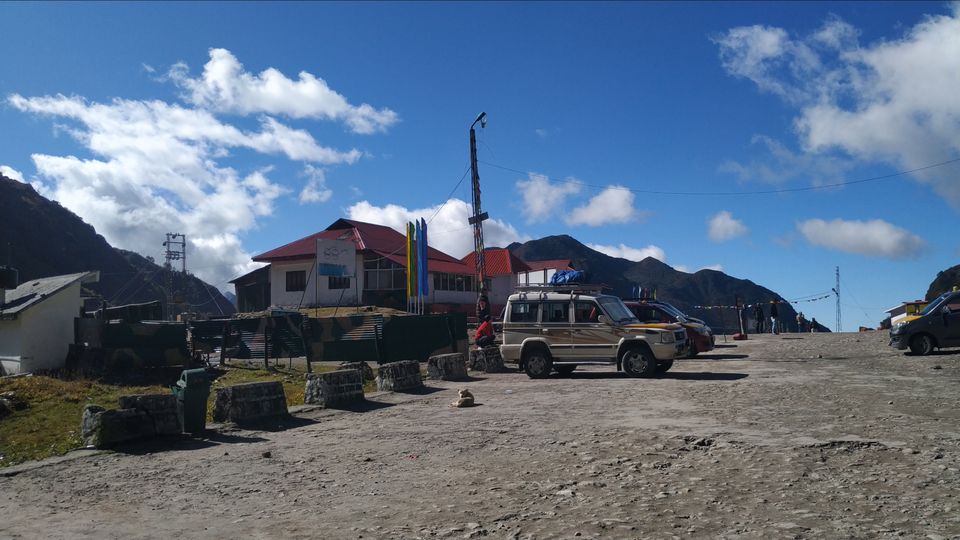 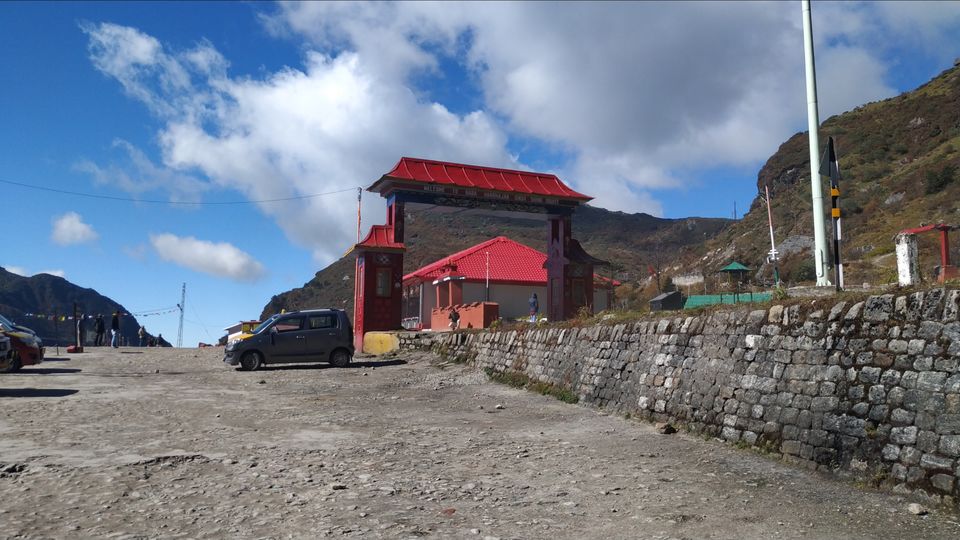 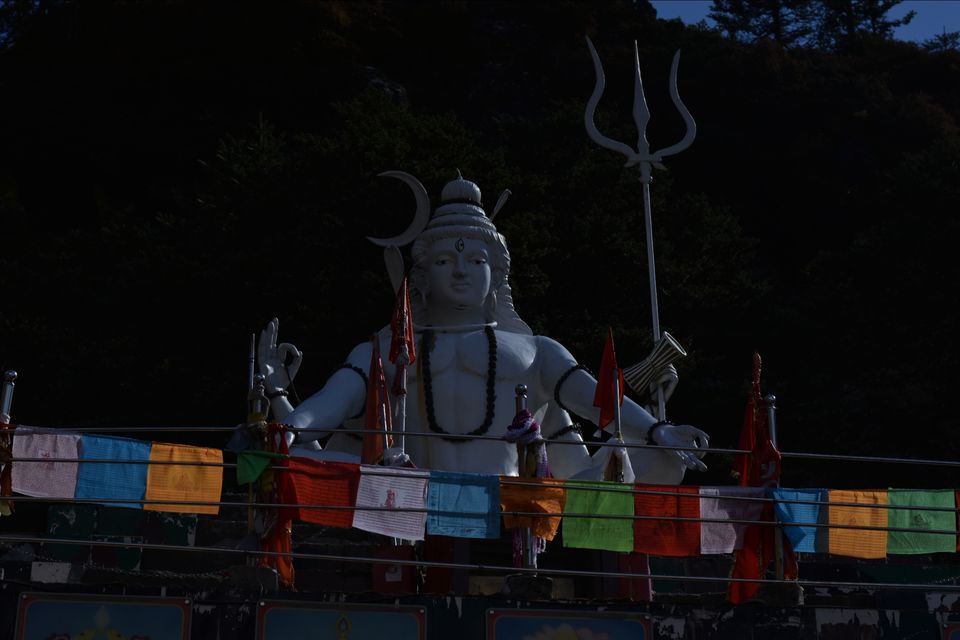 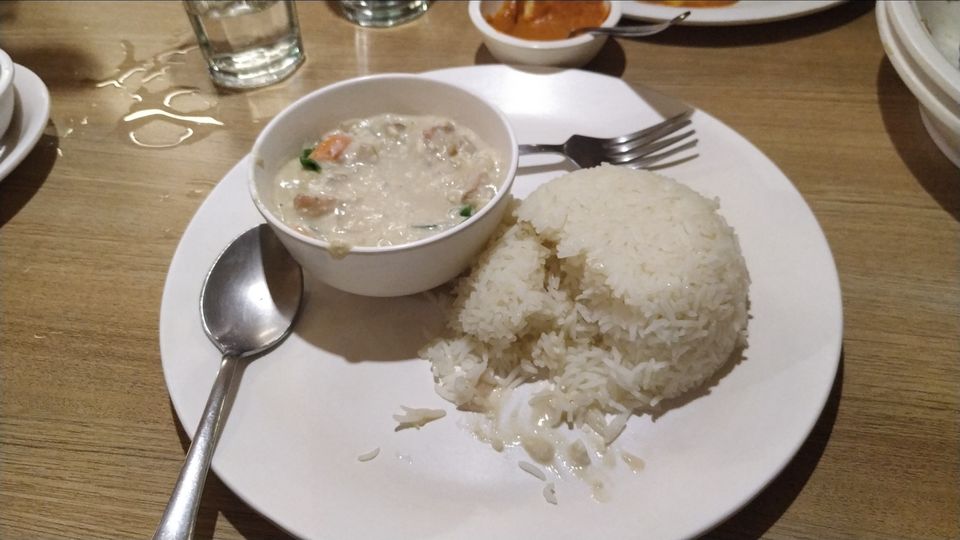 We left for njp early next day at about 10:00 am for our return journey. It generally takes 5:00 hours to reach NJP  railway station. But, the traffic and landslides can create delays. So, we decided to leave early but not before relishing the beautiful architecture of ENCHEY MONASTERY.

Our playlists were booming as we were signing off. Fortunately, our chorus did not create enough resonance for landslides to take place (😂).

We had our lunch on the way. And reached NJP railway station at 5:00 pm. We boarded the train (Darjeeling Mail) at 8:00 pm.

We were not ready to leave what we experienced. Our minds and hearts craved for more.
The daily monotony was waiting for us back in Kolkata. As if, the dream is fading away and the masqueraded reality was finally unmasking itself. We had to go. But, we promised we will be here again. East sikkim had so many surprises in it, then what will North sikkim have?

we will return to the realm of the zenith. 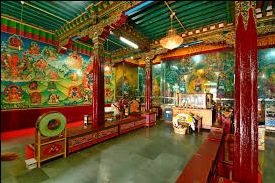 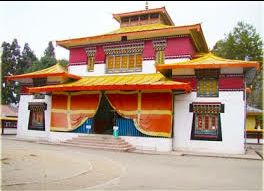