India Travel GuideIndia TripsWhen You Become The Reason For A Crazy Rule To Be Enforced On A Trek!

When you become the reason for a crazy rule to be enforced on a trek!

Laws are the foundation of a peaceful and an organised existence in the society. While most are based on logic, tradition or history, there are a chosen few that are strange, even bordering on the incredulous.

Did you know that it’s illegal to whistle in the city of Petrolia, Canada or for a chicken to cross roads in Quitman, Georgia?

Although they sound absurd, they are very much true. You just can’t imagine what incident might have prompted lawmakers to do so.

But I can tell you of one, where yours truly was completely and irrevocably responsible for a rule that was enforced on a trek.

declared our trek leader, as the trekkers huddled for instructions before traversing an exciting and quite deadly narrow trail towards Gorson bugyal.

Well, this started on the third day of the trek and quite unimaginably, the day we were going to summit Pangarchulla peak, right from the Khullara campsite.

We woke up to the harsh shrill of the alarm at 1 a.m. With great difficulty and bearing the chilling cold, I barely managed to get ready by 2.

Having packed my bags the previous night, I was confident I hadn’t left anything behind after the near miss on Day 1.

Obvious to the story, I did. When the Trek Leader enquired,

“Shit.” I forgot mine in the tent. Running back to the tent, I yanked off my gloves in the now open tent, through my backpack and found the micro-spikes.

I ran back to the group, micro-spikes in hand, anxious to now start the trek. I was to realise, 15 minutes later that my gloves were left behind back in the tent, as I grabbed the micro-spikes in the last moment.

Regret was instantaneous, as the chilling wind numbed my fingers. The only option, as I saw it, and as Alanis Morissette’s song goes…was to have ‘One hand in my pocket’ while the other held the trekking pole to balance myself on the slippery terrain.

We trudged through the darkness with only the light from our headlamps for direction. The cold bothered me but I knew daylight was round the corner and I banked on the sun to warm my hands for me. Little did I know how wrong my assumptions were going to be.

At 15069 feet, Pangarchulla is not amongst the tallest summitable treks in India. It is not the most difficult mountain around; rather, a pretty straightforward climb up. It is perhaps the closest one can get to an expedition-style climb (especially in winters) at such a relatively low altitude. The peak by itself is not imposing, in fact the other way around. It looks like a gentle climb up a ridge that takes you to the summit. But looks, like the cliché goes, are often deceptive than not.

Pangarchulla in all its glory! 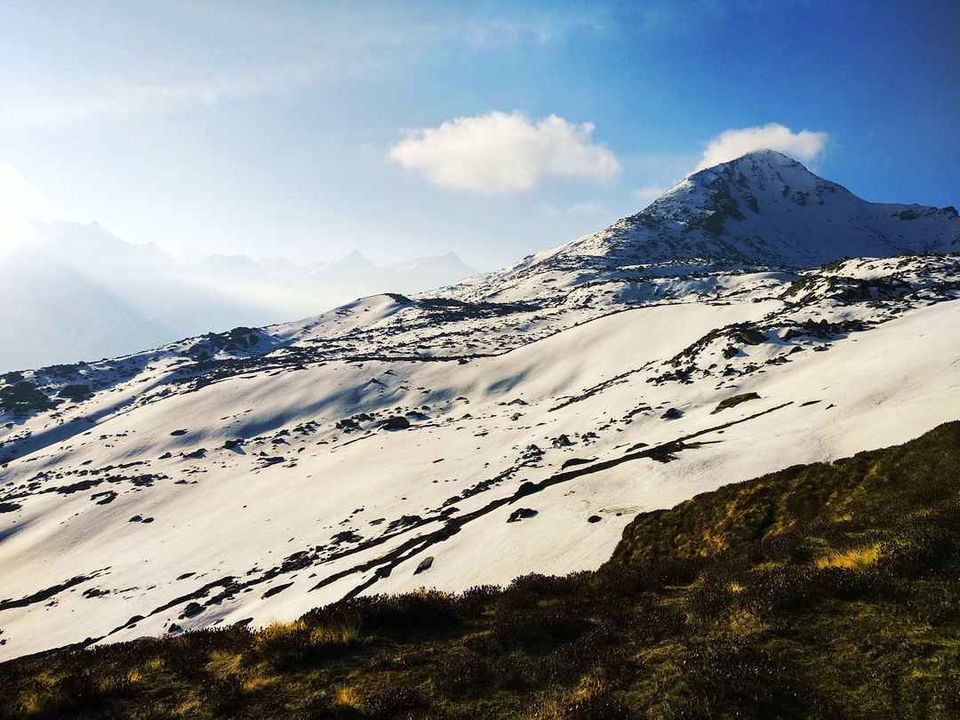 Somehow, 2 hours, some false summits and several falls later (my technical guide pointed out that it was all because I kept my hand in my pocket when really it was because I was a clumsy doofus), we finally reached the peak. While I was overjoyed, a small part of my mind was worried. It was cold up there and I had to get off that peak too.

I winced internally, as he intentionally frowned at me in the crowd, waiting to be acknowledged, which I sheepishly gave, nodding, almost imperceptibly.

As nice and gradual climb it looked from afar, the closer we got, we realised that it was all a farce. This peak wasn’t going to relinquish itself without some serious efforts. And then there was the issue of the cold, which was unrelenting.

If someone clicked a picture of me then, hands in my pockets, it would show someone staking a stroll in the park, maybe. The climb was intense, and yet, there I was, a hand in my pocket. Exasperated, the technical guide first warned me and then, several times later, swatted my hand away as I looked to secure some warmth in my pocket.

On the way to Gorson Bugyal 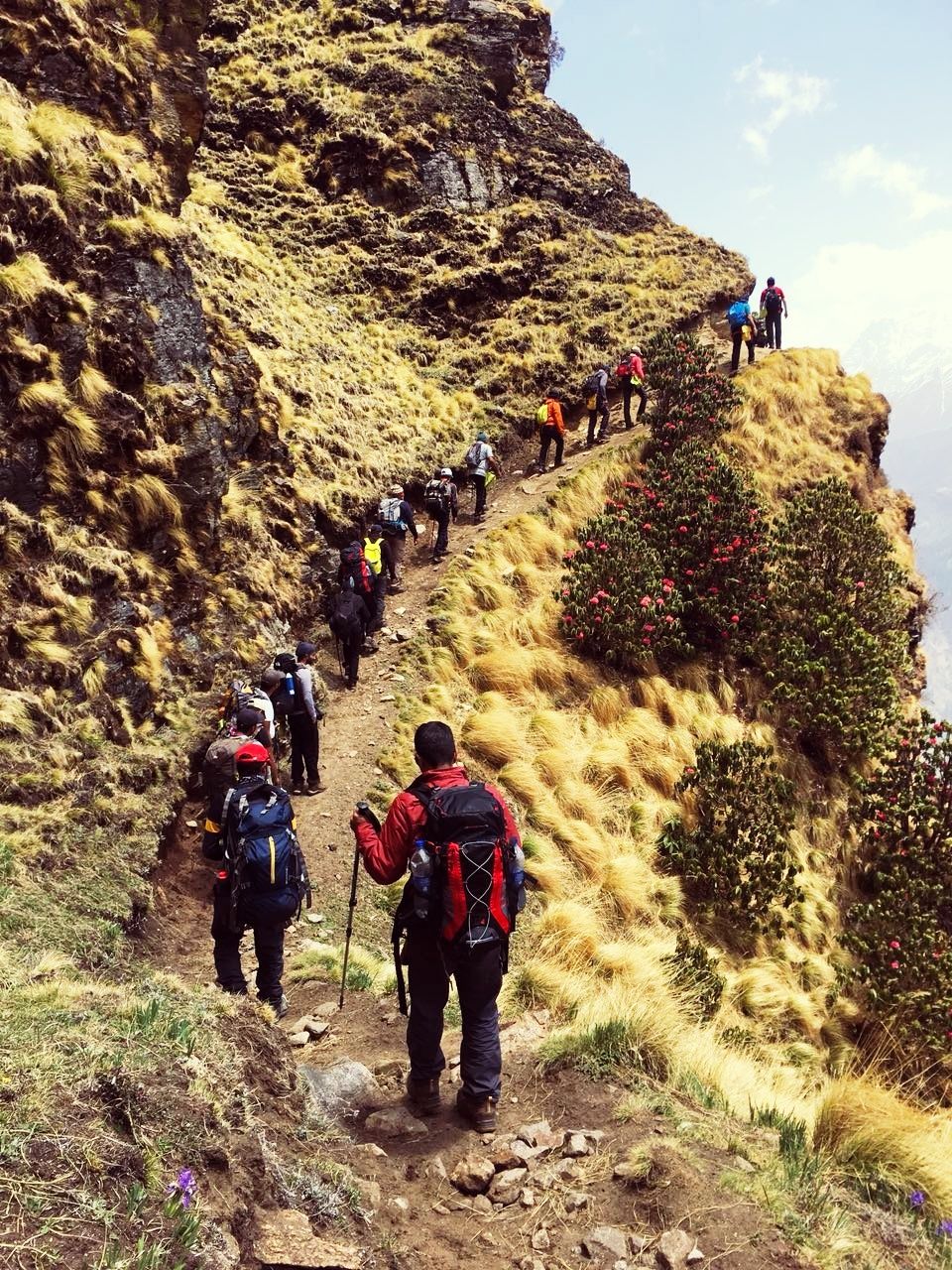 The descent was better but the guide caught me with my hand in the pocket several times. He was so not thrilled at that, and when we got off the mountain I saw him speak to my trek leader in rushed tones, who then glared at me for a moment, but said nothing.

I waited for a berating that was to come but surprisingly he didn’t say anything. Not even after the debriefing at the campsite.

Obviously, it did come up the next day as we were about to cross a dangerously narrow trail towards Gorson bugyal.

And that’s how the rule of ‘No hands in your pockets’ came to be!