Continued from Jaipur: My first impressions.

"Jantar Mantar" meaning "instruments for measuring the harmony of the heavens" is situated right opposite the City Palace in Jaipur. Coming out of the gates of City Palace, I stopped at the ticket window to purchase the entry tickets to the observatory.

As I entered I found that the observatory complex is a large one, and has a collection of several (19 in all) architectural astronomical instruments that had been constructed in the early 18 th century, with stone, marble and bronze. These devices were used to measure time and space, and for observing the astronomical positions of planets and stars. One of the instruments was the world's biggest stone sundial, which gives the local time with an accuracy of 2 seconds. 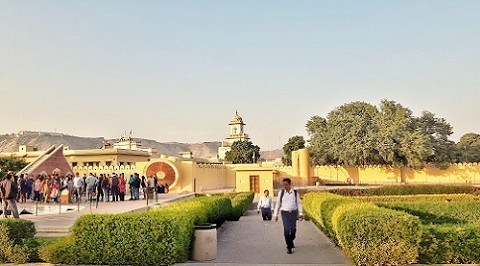 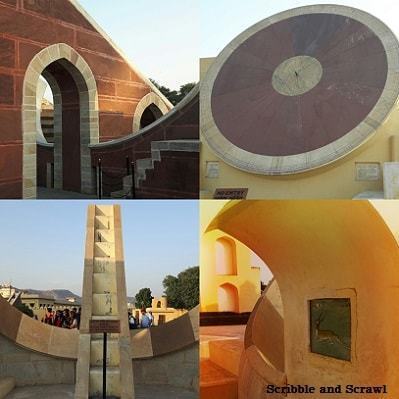 Of particular interest to me were twelve instruments, known as Zodiacic Circles, which were used for measuring the latitude and longitude of celestial bodies. There are twelve such instruments corresponding to each zodiac sign.

A visit to this UNESCO World heritage site, makes one appreciative of the scientific temperament of the king of Jaipur Maharaja Sawai Jai Singh.

It was time for the place to close down, so I walked out.

Strolling through the market place, I reached the Govinddevji temple, where hordes of devotees had gathered for the evening aarti. It was a strangely peaceful experience to blend into the atmosphere of the temple, while sitting among the sea of people and listening to the evening aarti (chants ). After the aarti I came out of the temple, and took a rickshaw back to the hotel. 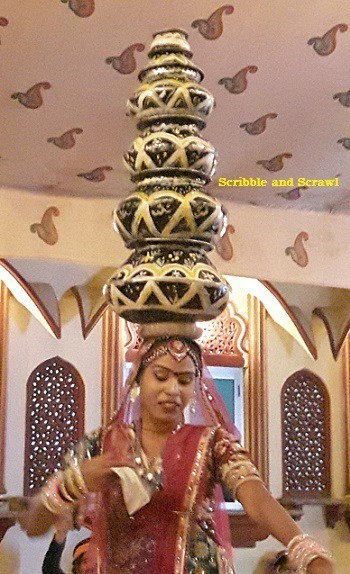 The dinner on the rooftop was accompanied with a live song and dance performance by folk artists. Tired but happy at having spent the day well, I retired for the day.

On the next day, I received a call from Rajasthan Tourism that the bus tour to Amber Fort at 11.00 AM had been cancelled due to the low number of bookings received. That was very surprising, but perhaps it was due to the cash crunch post demonetization. So, after my friend arrived at around nine thirty, we decided to take a taxi to Amber Fort. Luckily I had downloaded Uber app on my phone. I used it to book a taxi, which arrived within the next seven minutes. In less than an hour, we reached Amber Fort.

From the road, we could see the fort atop a hill. The Maotha lake and the green lawns outside the fort provide a soft touch to the rugged façade of the 16 th century fort. We began our uphill climb by the stairs, which was a bit tedious and reached the fort complex. 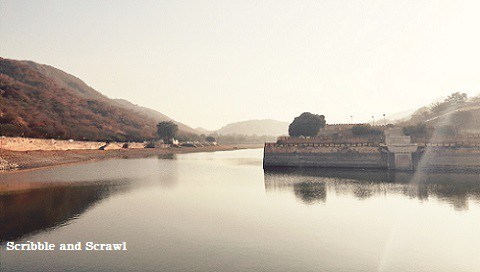 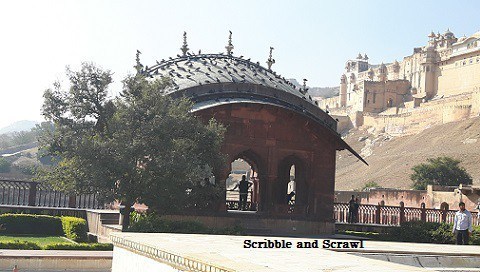 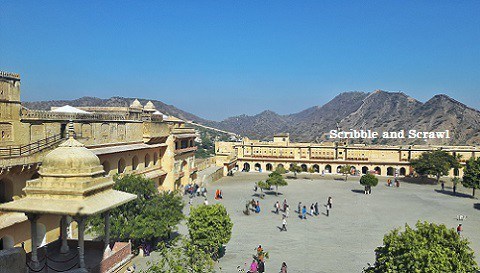 Inside the complex are several structures, including the Diwan-e-Aam, Diwan-e-Khaas, Jai Mandir, Yash Mandir, Sukh Mandir, Sheesh Mahal (Hall of Mirrors), Bhool Bhulaiya, and Zenana Dyodhi. The structures are built around a square garden laid out in the Mughal style. The architectural finesse is still evident in the stone carvings that can be seen in some of the structures. We went through many of these structures and found that each was different from the other. On one hand, the walls and ceiling of Sheesh Mahal were studded with mirror work, on the other, there are some dingy rooms and staircases in the Zenana (women's') area. We saw a number of paintings and murals on the walls of the museum. 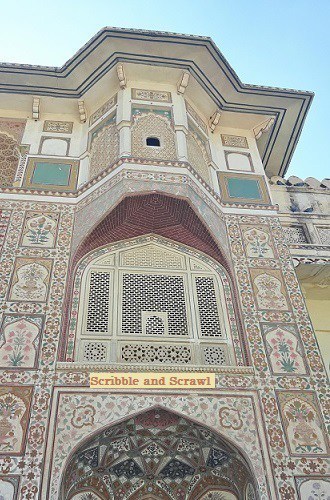 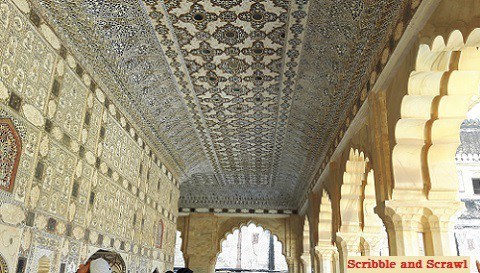 Inside the Fort complex, we found a Café Coffee Day and sat down for coffee and snacks. That was when we realized how tired we were after the walk inside the fort, and also how much we both had to catch up on, while meeting in person after a gap of more than twenty years. After chatting to our heart's content, we decided to leave the fort. While coming out of the fort, we saw turbans for hire, and our exuberant spirit urged us to try them. 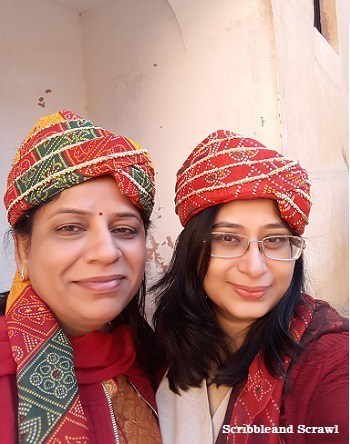 Then, taking a taxi, we came back to Jaipur, and headed straight to the railway station, as my friend had to take the train back to Jodhpur.

Bazaars of the old city

I spent the next day walking through the colourful and chaotic bazaars of old Jaipur, observing the brightly coloured drapes that hung outside the shops. The weather on the sunny winter afternoon was just perfect for the walk. Checking Google Maps from time to time, I kept a track of the route. I would stop at each crossing and stand admiring the arched gates. 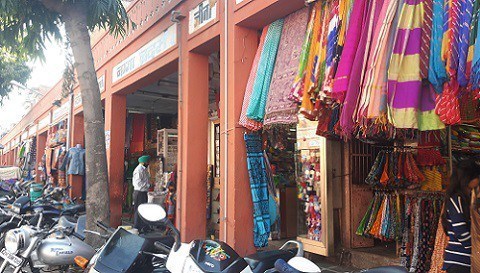 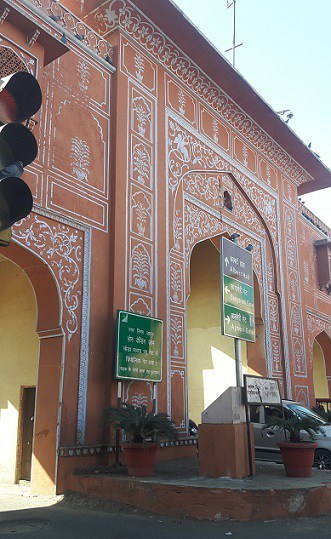 From a road in Bapu Bazaar in the old city, I took a rickshaw and diverted towards Albert Hall Museum, which is on the other side of the city. This part of the city is open and green. The rickshaw dropped me in front of the museum. 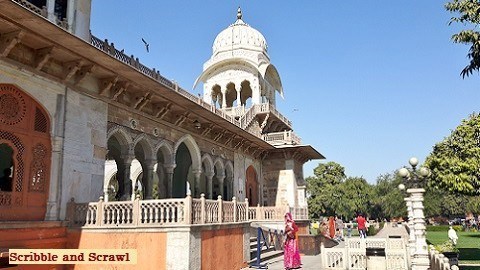 The museum set amidst the green lawns is a fine example of Indo - Saracenic architecture that combined the decorative elements of Hindu and Islamic architecture with Gothic style of architecture. It makes one appreciate how different cultures blend and borrow themes from one another over a period of time.

I spent a couple of hours in the museum, going through the galleries, and learnt about the history, architecture, sculptures, marble art, clay art, miniature paintings, and culture of the city.

After seeing several collections and displays at an unhurried pace, I purchased some mementoes from the museum shop. Then taking an auto, I went to the Laxmi Narayan temple. The temple made of white marble is located at the base of a fort called Moti Dungri Fort. Bordered by green gardens, the temple has a calm, silent and serene atmosphere. 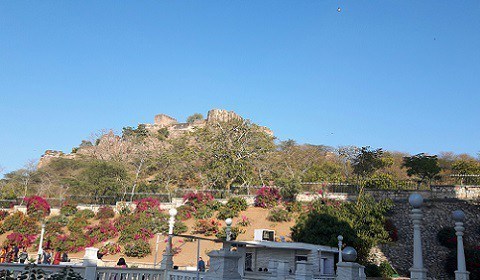 Now, with most of the locations covered, I decided to come back to the hotel. At the hotel, I enjoyed the folk music and dance show during dinner, and early next morning, I left for Mumbai, after making the most of my first solo vacation.

This trip being my first solo vacation will always be a special one for me as I learned to enjoy a vacation, while exploring a city endowed with a rich cultural and architectural heritage, completely on my own.

Stairs going up to the Amber Fort 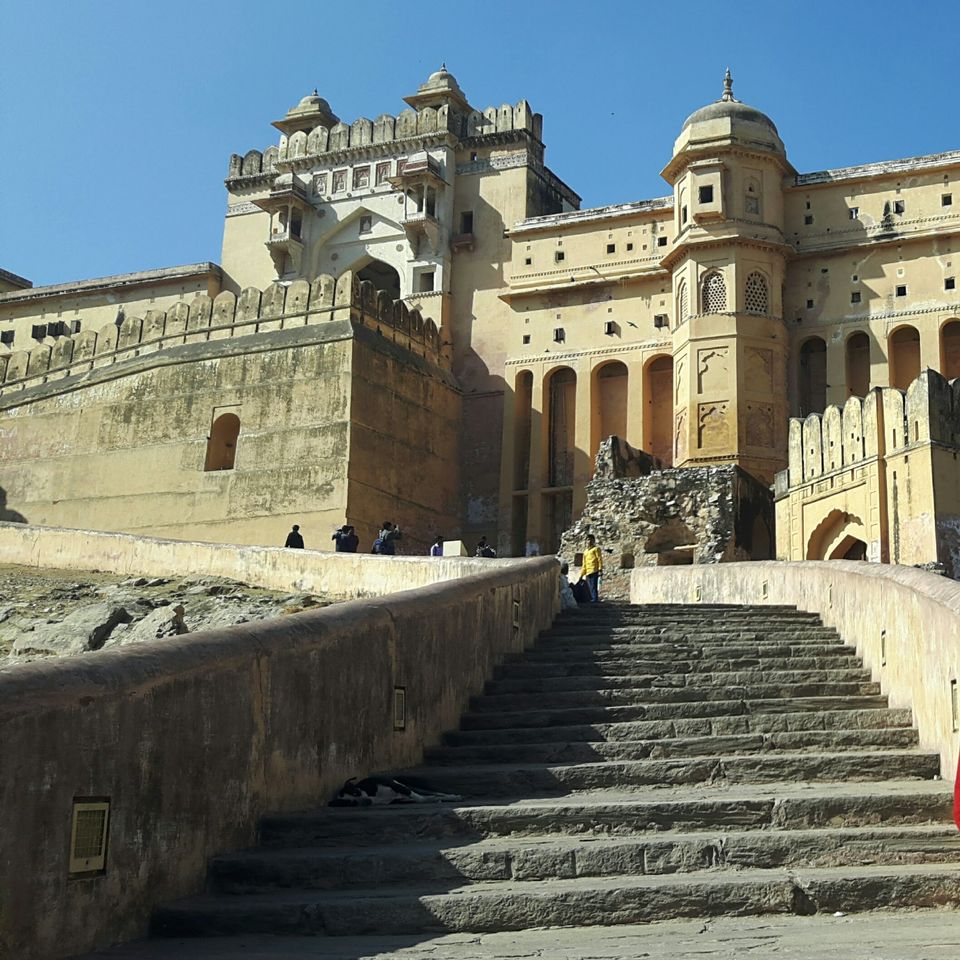 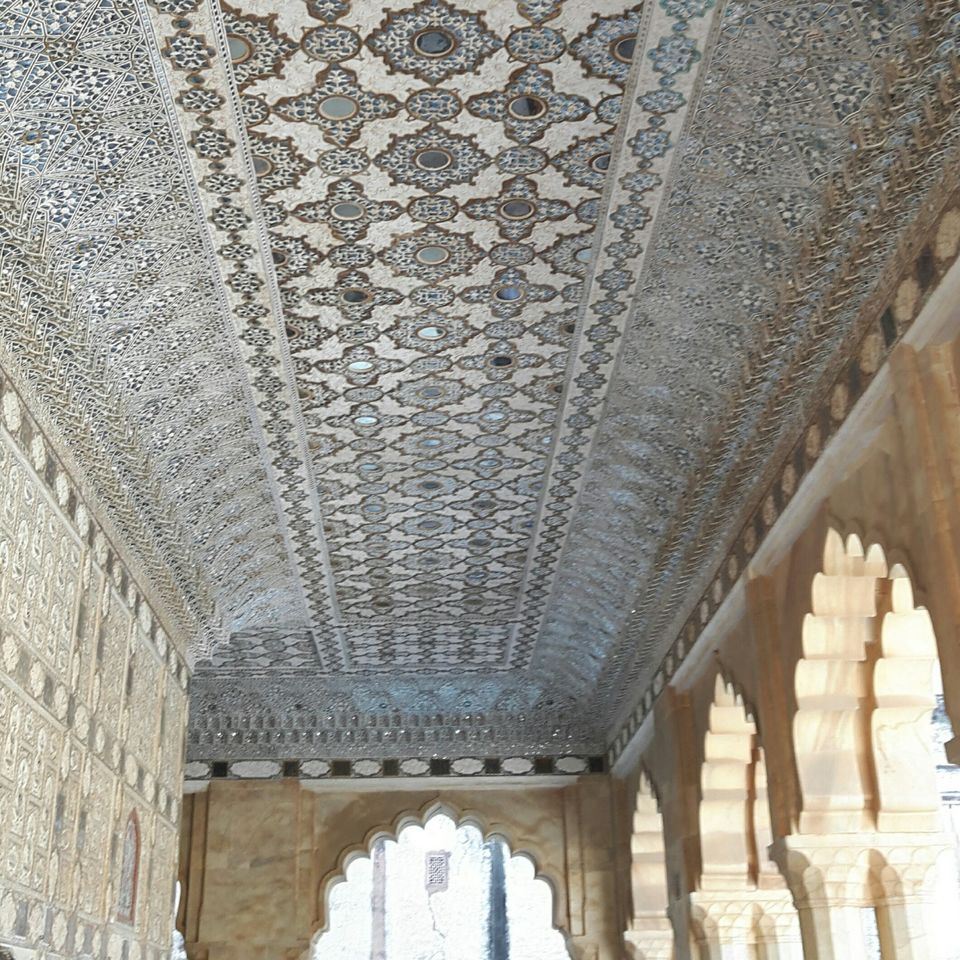 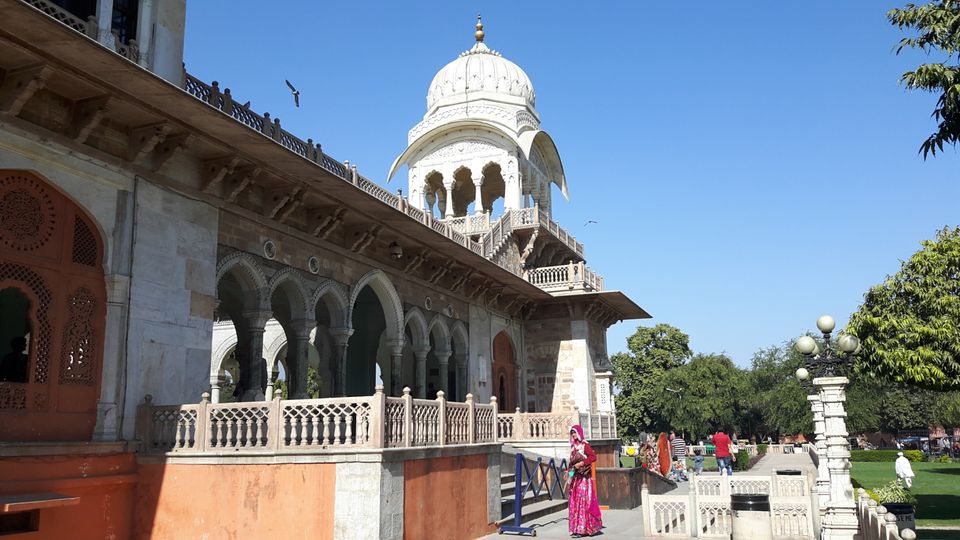 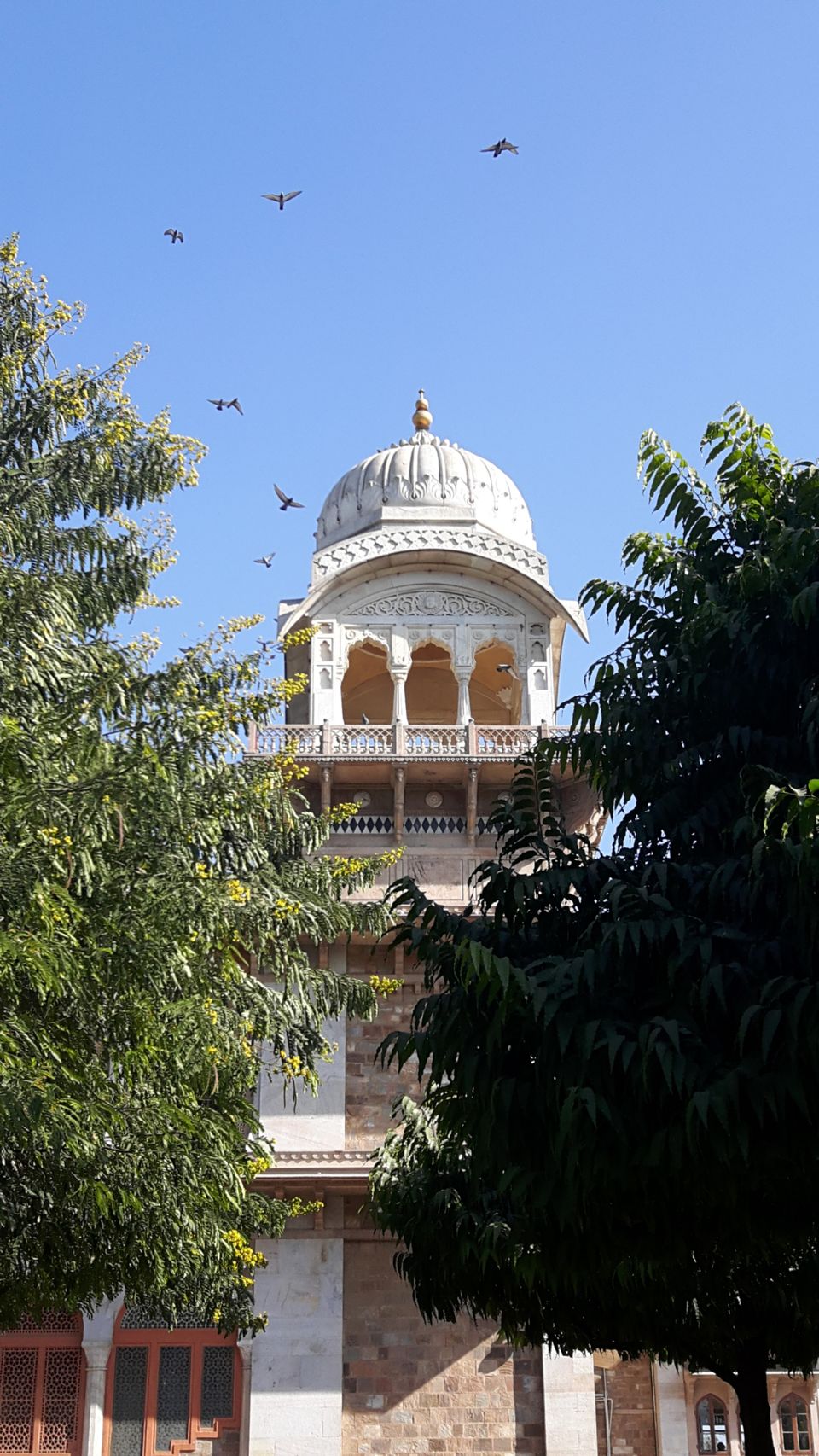