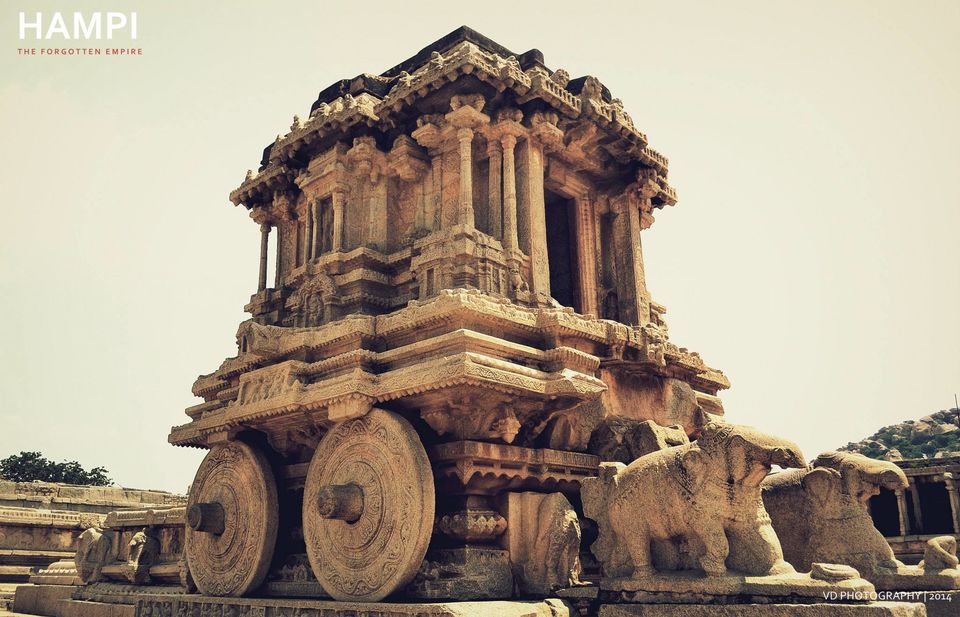 Hampi, the word itself means "champion". It is all about stories and histories, its kings and legends, its glorious past and ultimate ruin, its temples and other monuments. It was one of the richest and largest cities in the world during its prime.

Many millennia ago, the area was called Kishkinda or Kishkindanagari. This was the kingdom of the vanar Vali and later his brother Sugreeva, and home to the vanars who formed the bulk of Rama’s army in his battle against Ravana in the Ramayana. Anegundi, the birthplace of Hanuman, is also located in this area. Anegundi was the erstwhile capital of theVijayanagara Empire, before it was shifted to Hampi. 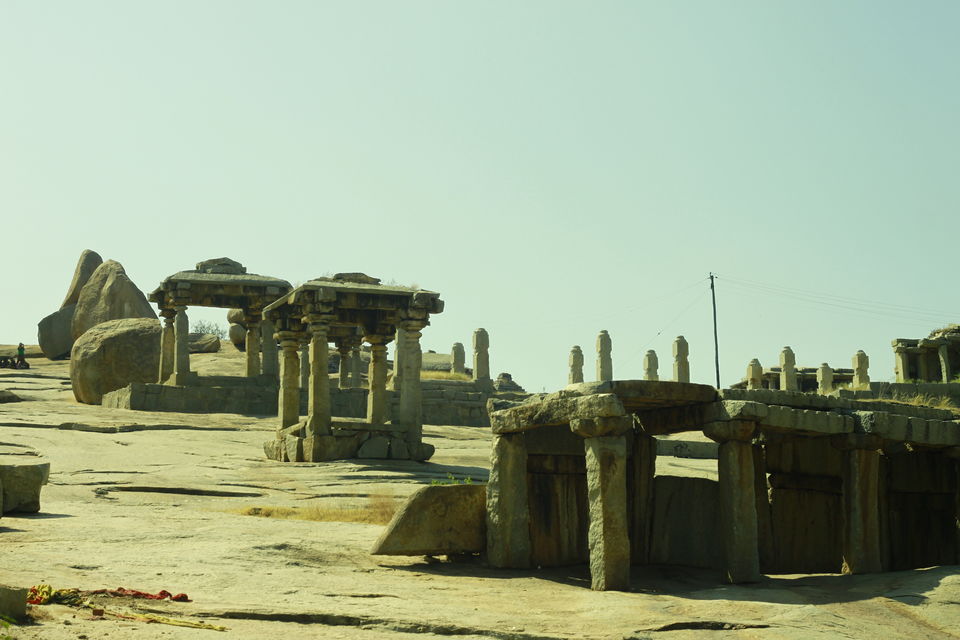 This UNESCO World Heritage site is the ruins of the erstwhile Vijayanagara Empire (1336-1646), which unified the whole of Southern India under its rule. Four dynasties ruled the Vijayanagara Empire over these 300 years. Founded by two brothers, Harihara and Bukka of the Sangama Dynasty (1336-1485), they were followed by rulers from the Saluva Dynasty (1485-1505), the Tuluva Dynasty (1505-1570), and the Aravidu Dynasty (1570-1646). Krishnadeva Raya is, arguably, the best known ruler from this Empire. And why not? Under his rule (1509-1529), the Empire reached its zenith in all fields—arts, culture, good governance, trade, foreign relations and successful military campaigns. Hampi was the capital and the showpiece of the Empire. 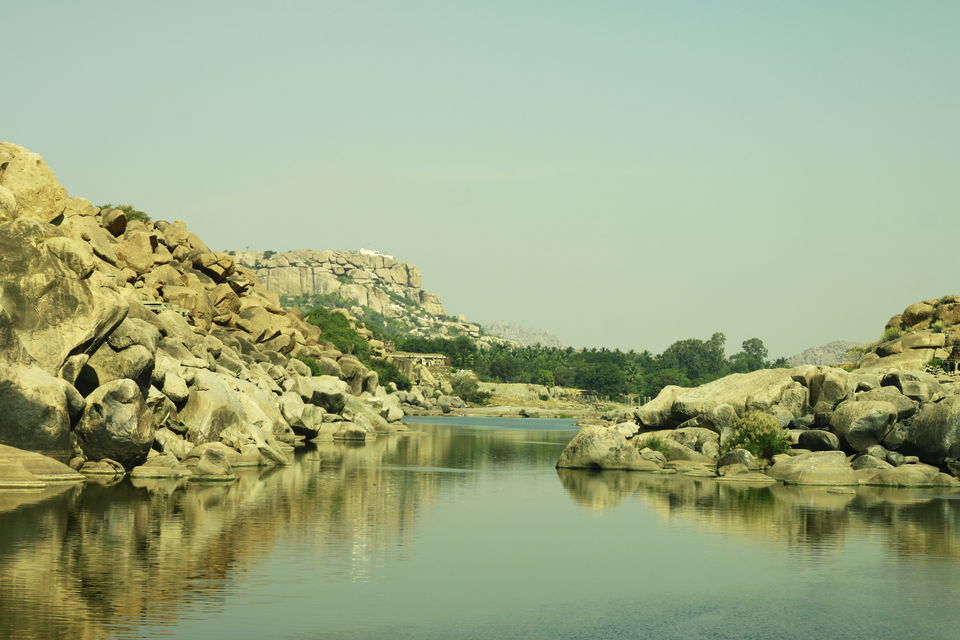 Domingo Paes extolled the beauty and grandeur of Hampi’s temples, its thriving art and cultural scene, the benevolence and justness of its rulers, as well as the facilities for the citizens of the Empire. Hampi was also an important trading centre for horses, elephants, and precious stones with traders coming from as far as Portugal, Persia and Arabia. 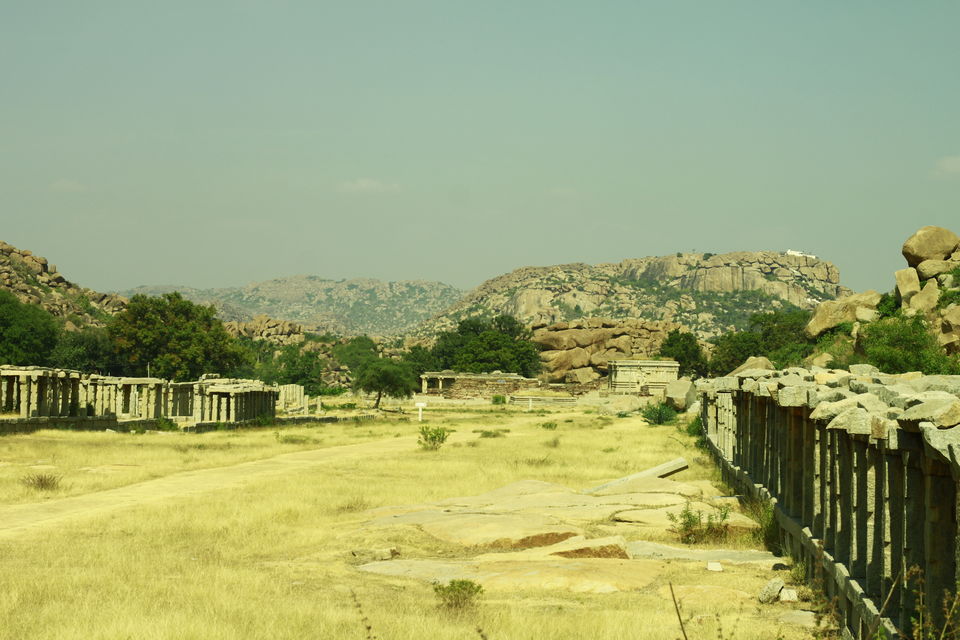 But this prosperity was not to last for long. The Vijayanagara Empire was a barrier to the expansion of Islāmic rule to the southern parts of India, largely because of the might of the Empire and partly because the various Islāmic kingdoms were too busy fighting each other. But by the mid-1500s, the Ahmednagar, Bidar, Bijapur and the Golconda kingdoms—collectively known as the Deccan Sultanates—had stopped warring with one another and united with a single goal in mind: to destroy the Vijayanagara Empire. 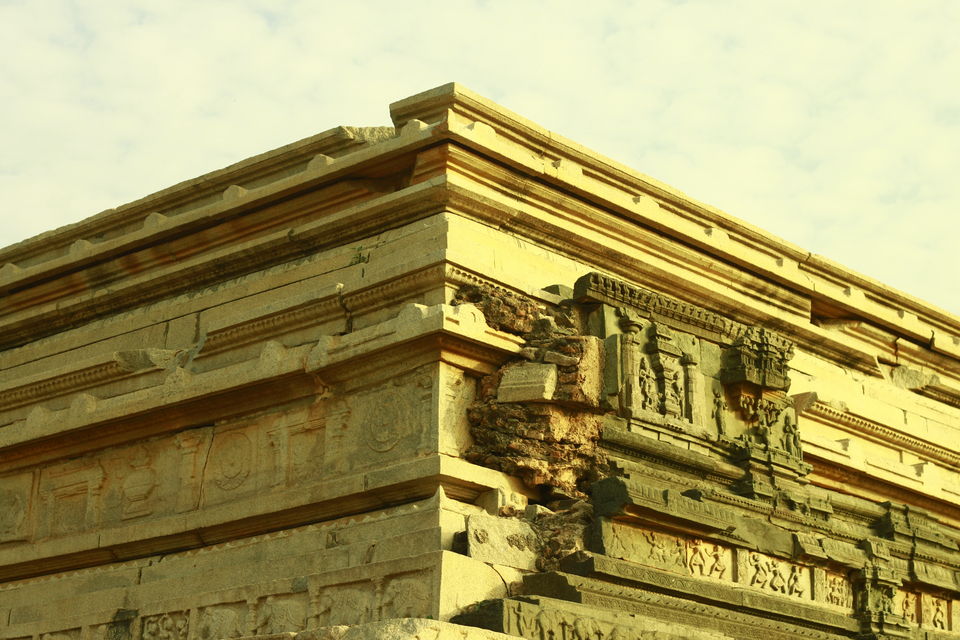 On January 26, 1565, the mighty Vijayanagara Empire was routed by the collective and united armies of the Deccan Sultanates. The Battle of Talikota, as it came to be known, resulted in complete victory for the Sultanates and death of the Vijayanagara ruler, Achyuta Raja. What followed then was the pillaging, plundering and burning of the Vijayanagara kingdom in general, and Hampi in particular. I fail to understand how the very same Sultanates, which built such outstanding examples of Islāmic architecture in their kingdoms (eg. Bijapur), could deface such beautiful monuments. The temples, in particular, bore the brunt of the destruction. Every temple was broken into, its carvings defaced, the main deity destroyed completely or taken away, the gold and jewellery looted… Some reports mention that the looting and pillaging continued for 6 months! 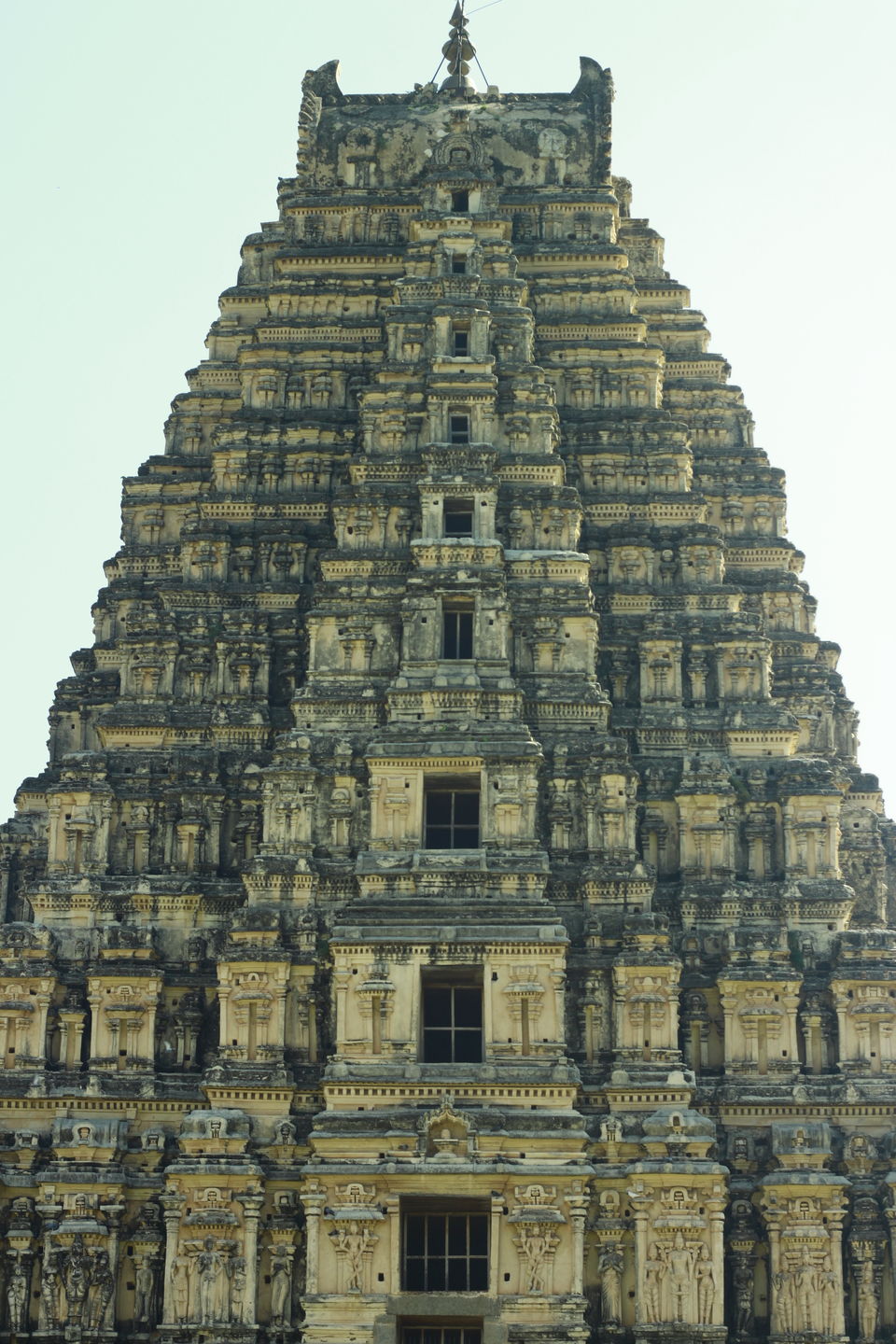 Most temples were set to fire, but since they were built of granite could not be burnt to the ground. Only the temple towers, which were made of brick, suffered structural damage. However, one temple escaped this carnage at Hampi—the Virupaksha Temple, perhaps, the oldest temple in Hampi and which pre-dates the Vijayanagara Empire. Built entirely of granite, the local stone, the imposing and grand entrance tower is nearly 165 feet tall. The Temple enshrines the local deities of Pampapati (Shiva) and Hampamma (Parvati).

And why did the Virupaksha Temple not suffer the same fate as other temples in Hampi? According to our guide, there is a sign of a wild boar or varaha, which formed part of the royal emblem of the Vijayanagara Empire, at the entrance to the Temple. For Hindus, the varaha is an avatar of Vishnu, and thereby holy. On the other hand, Muslims consider the boar/pig as an unclean animal, and therefore un-Islamic or haraam. It was this sign, which stopped the Muslim invaders from entering the temple and destroying it. 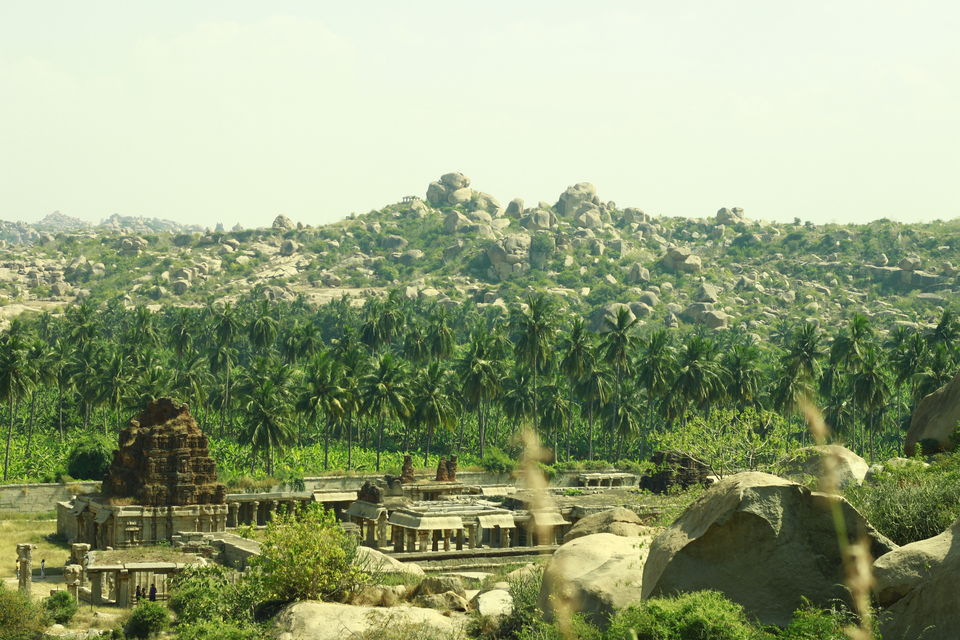 Today, picture-perfect Hampi and its imposing monuments or should I say ruins, as well as its mythology and history are a big draw for visitors. Like in the past, Hampi receives hordes of them from all over India and the world to look at the ruins with awe and reverence.

I wonder what the stones of Hampi would have to say about their surroundings, if they could speak! 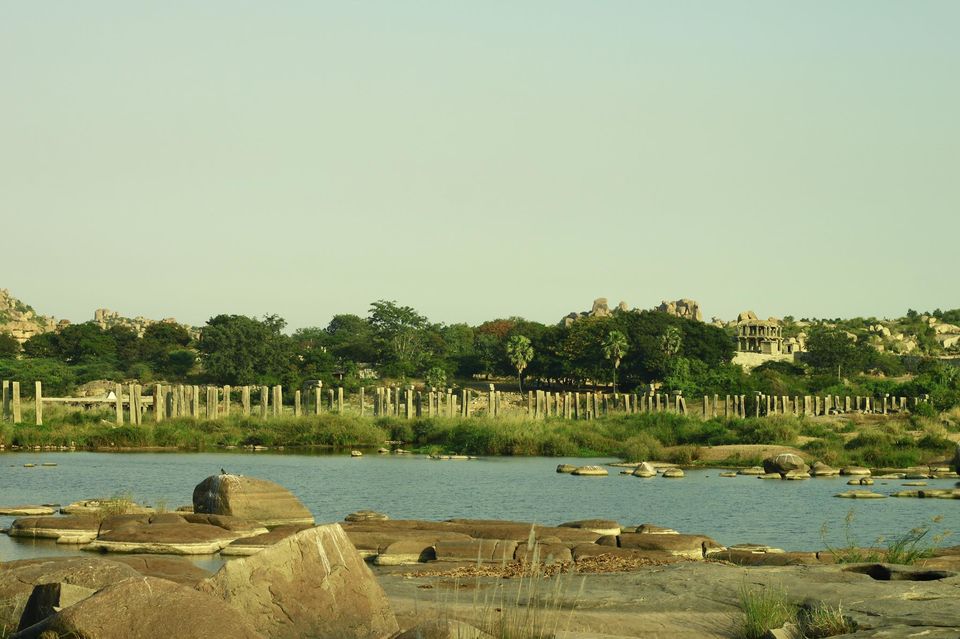