Kemmangundi - the less travelled abode of the calmness 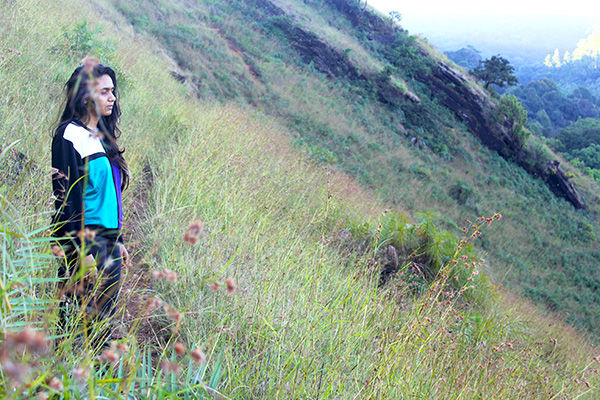 We’re about to enter 2017, ‘what plans people?’ that’s what I heard everywhere! Some had party plans and others came up with travel plans. All I wanted to do was go into the wild again! I feel like a caveman!

One of my friends was going on a Chikmaglur backpacking trip, and I had no plans! I thought even I needed to visit Chikmaglur as I had covered only half of it when I went with parents long ago. So, I tagged along. Since, it was a backpacking trip we took a local bus from Bangalore in the night. While in bus, we were looking at places on the internet where we can go and enjoy the limited 1 day time we had. After reaching the main bus stand in Chikmagalur the next morning, we had boiled the list down and were confused between Bhadra Wildlife Sanctuary and Kemmanagundi Peak.

Upon approaching several bus drivers even though I knew the local language we were misguided. Half of them were informing us that Bhadra Wildlife Sanctuary is closed and there are no safaris. The other half told us that even Kemmanagundi was closed! I was extremely disappointed. As soon as we took out our list to have a relook, an auto driver came approached us telling that he will help us enquire in the forest department about both the places we had decided. So, we hopped on and then after enquiring found out that both the places are open. Now, I was confused with joy :P. The auto driver made it easier to decide by offering to take us to the peak of Kemmanagundi in his auto! An auto! For 65 km! 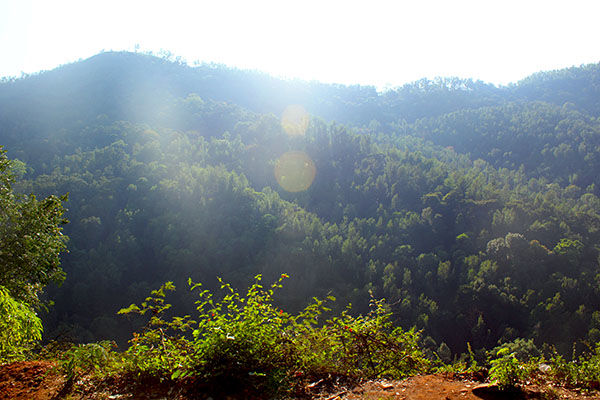 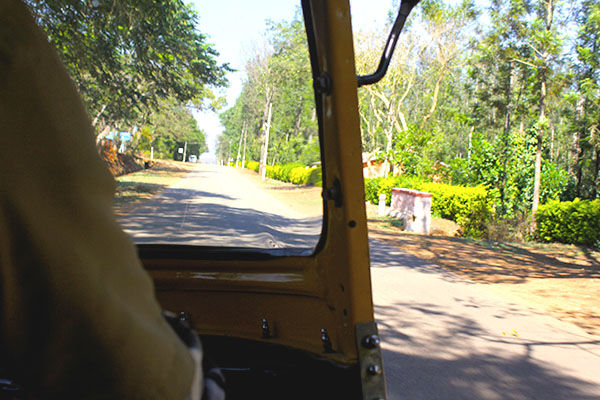 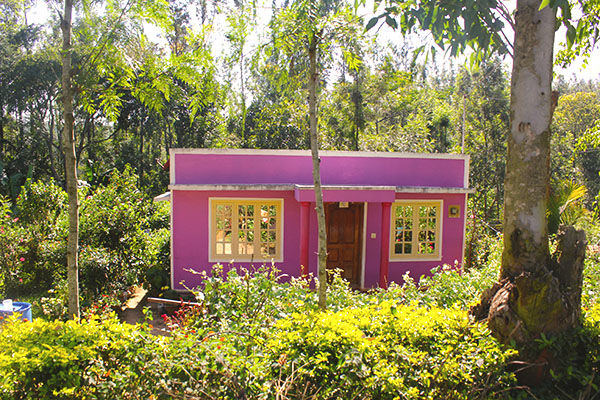 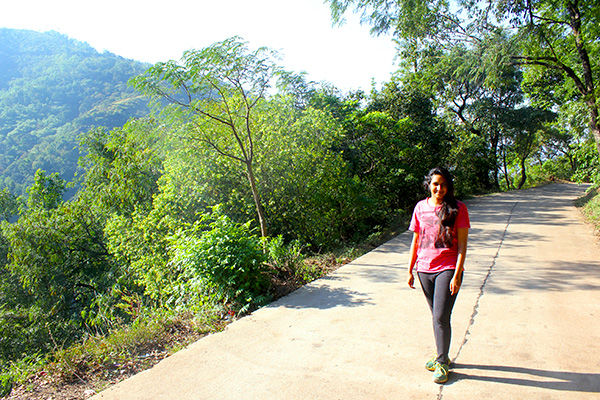 I was very skeptical initially as Chikmagalur is known for slippery muddy hilly roads. But the auto ride was one in a million mind-blowing rides. Kemmanagundi has not yet been explored or commercialized as much as its counterparts in Chikmagalur, so I started panicking again when we were about to reach as we had not booked anything for our stay. I tried to check out places on my phone, but the damn internet didn’t work. I thought we were doomed. Moreover, since we went on a Monday there were no trace of any human on the way. I was scared.

Again, the autowallah came to the rescue. He calmed me down by telling that there are Government Guest Houses by the Horticulture Department near the peak. Well, well… we all know how we think they’re not even worth checking out, right? I was in total denial again! But when we reached the top where the cottages were situated, I could not believe the European Style Cottages with French Windows and beautifully crafted garden. It was indeed unbelievable! 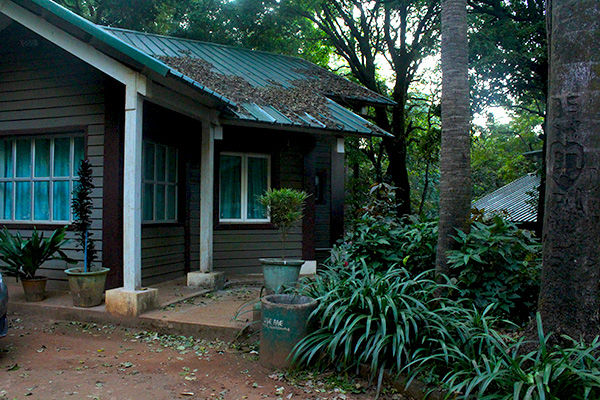 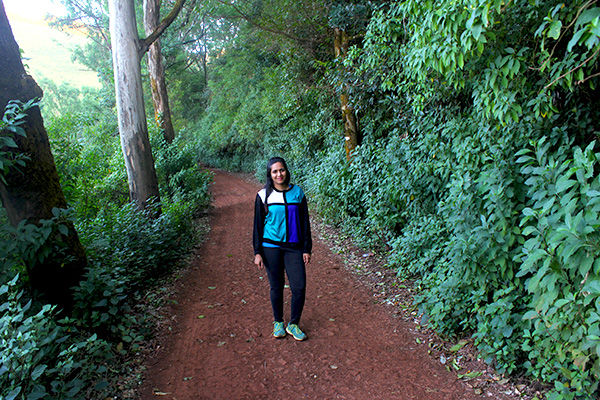 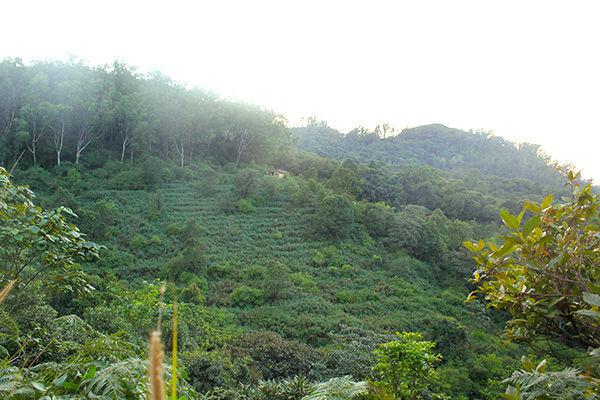 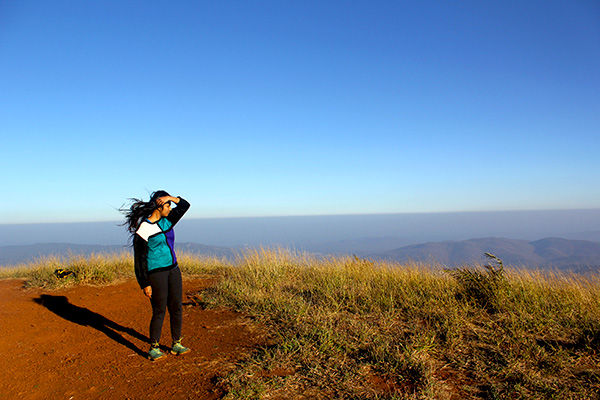 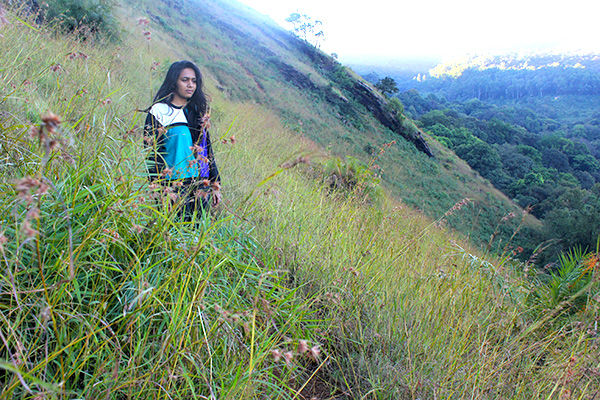 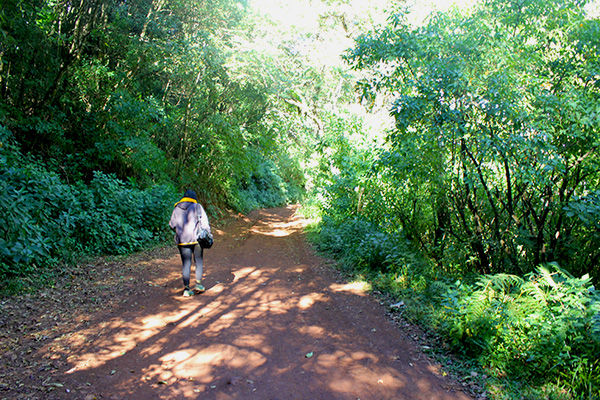 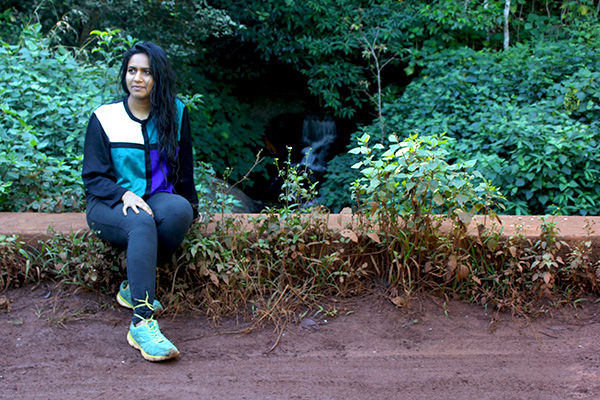 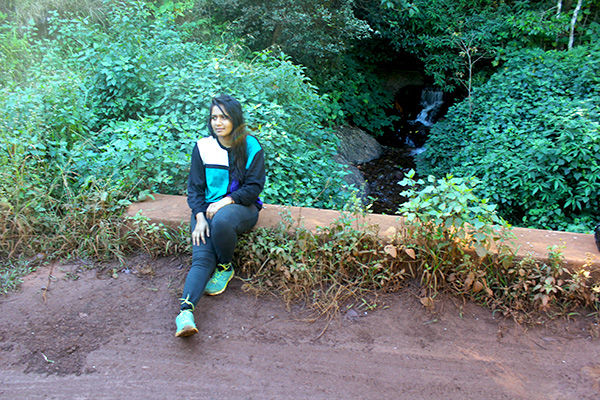 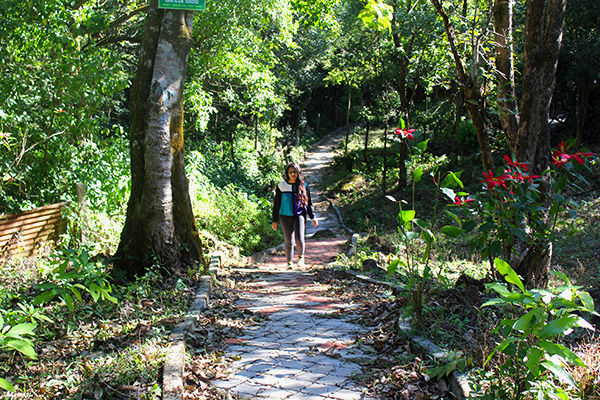 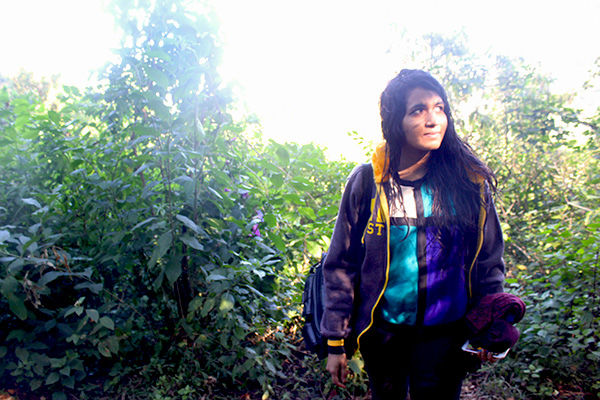 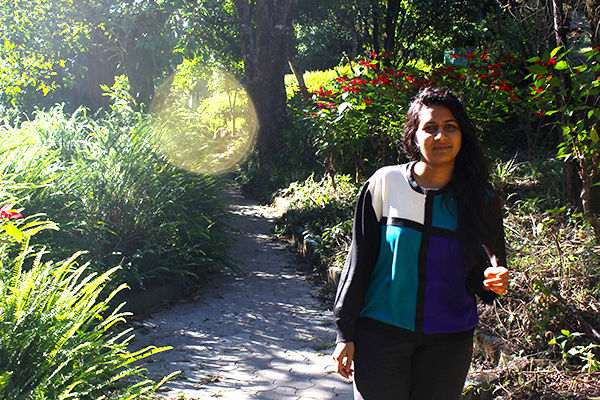 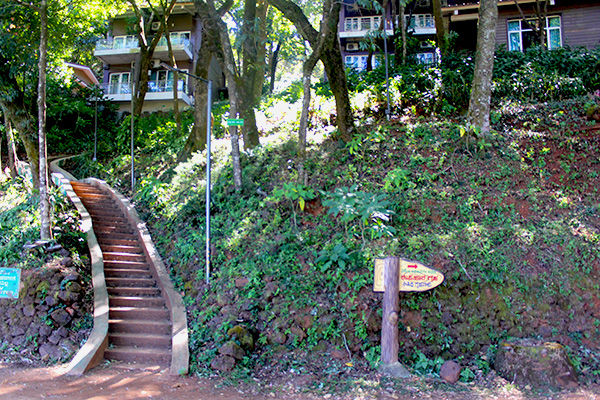 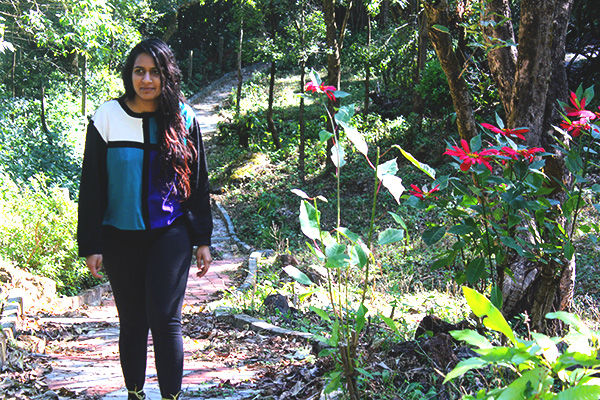 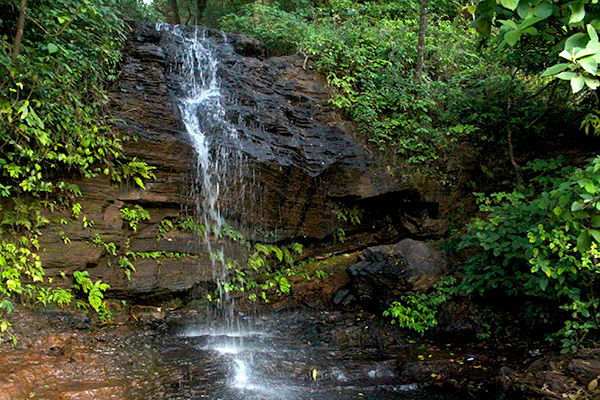 The next day early morning we left for Z-Point. Warning for all you people whom I have inspired to go there that don’t even bother asking the jeeps there as they will rip your pockets off. INR 700 for 2 km distance! Just stroll along the neatly paved muddy road. On the way, there is a tiny waterfall called Shanti Falls. The surrounding is indeed mind blowing like any other hill trek. We reached the peak at around 7:30 am and it was windy, not too cold, as there was early morning sunlight in the right amount. I just felt like staying there forever!

While returning, we decided to check out the rock garden, which had some sculptures from the Ramayana and pretty much like a park filled with exotic flora. You can laze around there or have a nice walk. There’s another place called the Raj Bhavan, also known as Krishnarajendra Hill. It’s a vast flat land spread across 20 acres on the cliff with a beautiful fort and something like Mughal Gardens.

There is Kallati Falls nearby and Devaramma Temple as well, which are pretty famous. Also, there’s Hebbe Falls, which is a beautiful place to visit. We skipped on these, as we didn’t have enough time.

We came back and had our breakfast at the restaurant attached to the guest house which is pretty decent, and then decided to leave. But how? Thought we will catch the Government bus, but then it was available only at 10 am which we had missed and the other one was at 4 pm which would have been too late for us, as we had to reach Bangalore the same night. The private jeeps were now asking us INR 3000 till the bus stop that was on the base of the hill as we had to pay for a round-trip. We denied and then went to checkout from the guest house when incidentally the office guys asked if we needed a ride till the nearest bus stand or a town. I was overwhelmed!

The kitchen in-charge of the restaurant, who was going in his tempo till the nearest town Tarikere to buy chicken, dropped us there. From there, we didn’t take a route via Chikmagalur. I thought I will take a detour and meet my brother who stays in Hassan. For that, we had to take two local buses from Tarikere to Arsikere and then from Arsikere to Hassan. We spent an hour in Hassan and again took a local bus back to Bangalore.

During heavy rains, it gets very slippery and trekking is difficult.

There might be leaches during rains. Carry castor oil and keep yourself fully covered, avoid shorts and keep a Swiss Army Knife handy.

If you are planning to take your own car or bike, make very sure that your vehicle has a full tank.

How to Travel pocket friendly to Kemmangundi by Bus?

Food should not cost you more than INR 300 for 2 people per meal.

How to reach by Air

2. You can fly to the Bengaluru International Airport, and from the city travel by road to Kemmanagundi. The distance from Bangalore to Kemmangundi is 298 km.

How to Travel by Train

2. You can take the Jan Shatabdi Express from Bangalore to Birur. From Birur station you can hire a taxi (Rs.450/- to Rs.500/-) or take a bus to Kemmanagundi. There are two return trains from Birur to Bangalore: the Janashatabdi Express and the Chalukya Express.

How to reach by Road

It takes about 8 hours by road from Bangalore to Kemmanagundi.

Road routes from Bangalore to Kemmanagundi:

Accommodation in and around Kemmanagundi

1. Horticulture Department Guest House (known as Raj Bhavan), which has a number of rooms. This is a budget accommodation with a double room costing less than Rs.700/-.

2. Nature Nivana Homestay, Chikmagalur is a bungalow located in the Baba Budanagari Range, 38 km from Kadur Railway Station. Activities offered to guests include trekking, fishing, coracle rides, etc. Tariff: Rs.1950/- per night and could be higher during the peak season from 20th December to 5th January & from 1st April to 31st May. Tariff includes all meals and taxes, a few treks and a plantation tour. A variety of day/night packages are available.

The Planters Court Hotel is located exactly opposite the KSRTC Bus Stand in Chikmagalur. The in-house restaurant serves both vegetarian and non-vegetarian food. Since most of the staff primarily speak in Kannada, it is advisable to learn a few Kannada words! (08262) 235881 / 235882‎

4. The Taj Garden Retreat is now known as The Gateway Hotel. The resort is in the midst of the Baba Budangiri Range, near Kadur Railway Station. The hotel arranges sightseeing visits to the Bhadra Tiger Reserve and the Mulliyangiri Peak, amongst other tourist spots in an around Kemmanagundi.

There are umpteen number of homestays and resorts also if you check out Airbnb, MakemyTrip, Yatra, etc.

I had a wonderful experience. Anyone who loves to travel must go take a break from the city life. Reach me out for more details.