Pattadakal, a small village in Bagalkot district of Karnataka, is a name that I had not heard of till recently, but after seeing the place en route to Hampi from Badami caves, I was so enthralled by its beauty and richness of art that if I have to describe the place in one word it would be 'mesmerizing'.

This small village, situated on the bank of Malaprabha river, is a UNESCO World Heritage site with a cultural legacy dating back to the 6 th century BC.

Starting out from Badami, in the morning at around 8 AM, we reached Pattadakal in less than an hour. On entering the heritage complex, I found a picturesque site of ancient stone temples in sprawling green lawns with palm trees lined on the sides, and with light red sandstone hills in the backdrop. 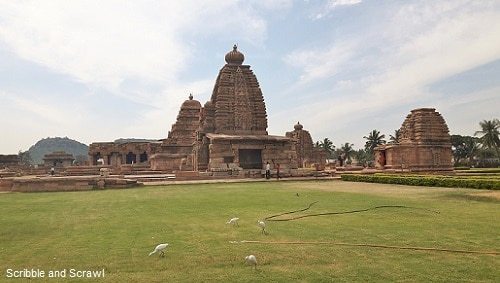 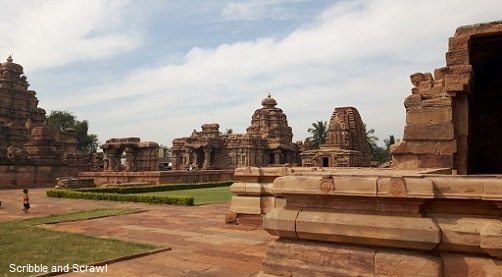 The magnificent stone temples are constructed in various forms and styles. Some temples are profusely adorned with sculptures and intricate designs, while others are moderately or sparsely carved.

The site, also known as the 'Cradle of Indian temple architecture', marks the blending of Northern ( Indo Aryan) and Southern (Dravidian) styles of temple building.

Most of the temples in the complex are relics and archaeological sites, with the exception of two temples where we found the priests performing a Puja. One of the temples is Virupaksha temple, dedicated to Shiva. Just opposite the temple is a pillared pavilion enshrining the sculpture of Nandi, where some people had gathered for worship.

Virupaksha temple is the largest of all temples in the complex and it represents the zenith of Chalukyan art.

Though many of the structures are in a dilapidated state owing to the centuries elapsed and also due to vandalism, yet the remnants speak volumes of the engineering skills and dexterity with which the construction was planned.

Not very far off from Pattadakal is another site known as Aihole. Here around 125 ancient temple structures, both big and small are spread out across the town, with some temples enclosed within a boundary complex. Most of the structures are in old and ruined condition.

Just as we entered the complex, a local teenage girl, who was picnicking there, requested me to click her photograph with my cell. I agreed and clicked. When I showed her the picture, she liked it. Quickly jotting down her address on a piece of paper, she handed it to me and asked me to post the picture on the given address. The address, written mostly in Kannada, had the name of the girl, followed by the name of the village, district and state. Nowhere in the address was a house number mentioned. Maybe I will take a chance and post her the picture. Whether it will reach her, I have my doubts.

The first temple near the entrance of the complex is the Durga temple. It has some beautiful carvings on the walls and pillars that transform the mundane rocks into graceful art forms.

Here's a stepped well right inside the complex. 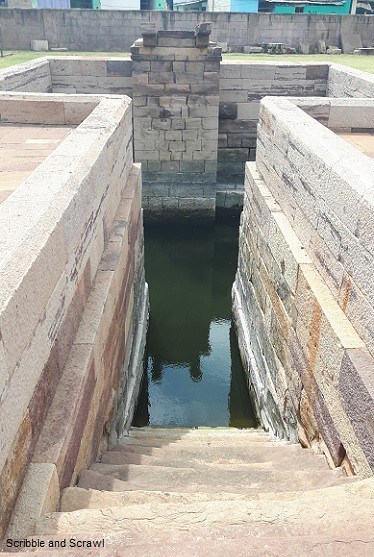 Aihole was the earliest capital of Chalukyan Dynasty before they shifted the capital to Badami. It was once a thriving commercial centre. A museum inside the complex has a model with the layout of all historic structures in Aihole.

The inscriptions in the structures are supposed to give a glimpse into the lifestyle of people during the Chalukya period. Besides the names of the Chalukya kings and the wars they fought, the names of poets Kalidasa and Bharavi also find mention in the Badami Chalukya inscriptions. Interestingly, the inscriptions are written in Telegu Kannada script, which was common in the 6 th - 7 th century, and became increasingly separate after 12 th - 13 th century. 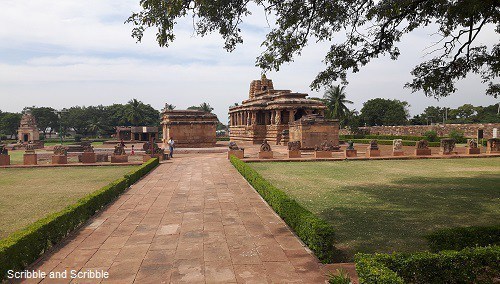 Together known to form the laboratory of Indian temples, Pattadakal and Aihole are places worth visiting for anybody with an interest in exploring Indian art and architecture.

After seeing the two sites, we reached Hampi by the late afternoon. More wonders awaited us at Hampi - The City with an iconic heritage.