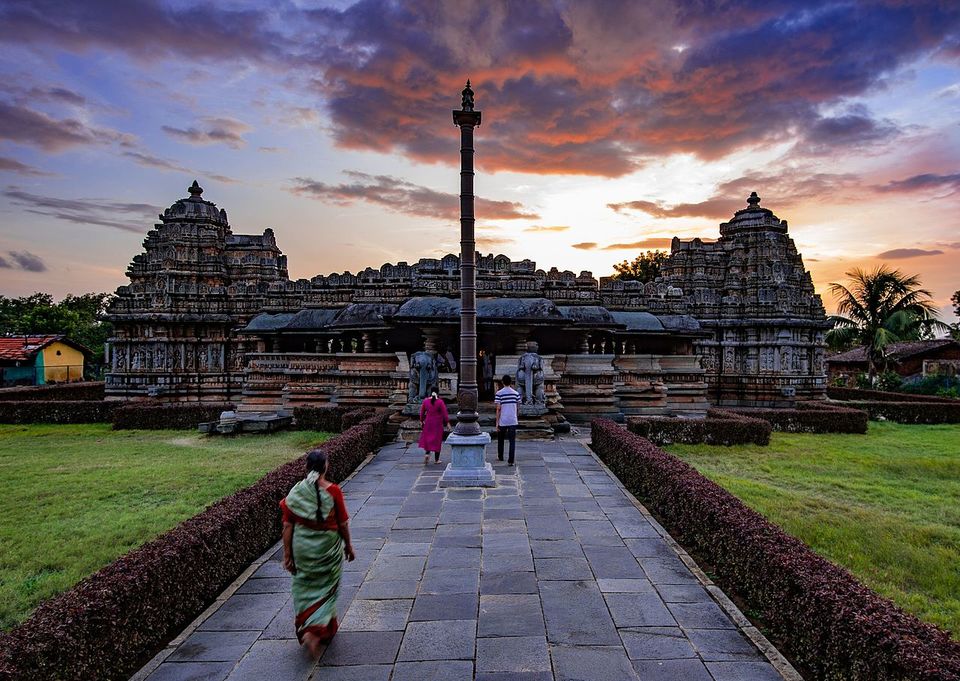 The Hoysalas who ruled the region of the present state of Karnataka has given a lot of phenomenal structures those define the architecture during their reign from 11th to 14th century. Large and small temples built during this era remain as examples of the Hoysala architectural style, including the Chennakesava temple at Belur, the Hoysaleswara temple at Halebidu, and the Kesava temple at Somanathapura.But, there are many unknown temples in Karnataka those also show case the majesty of architecture maintained by Kings of Hoysala as in Belur and Halebidu and also in ShravanBelagola. These temples built by Hoysalas have a distinctive features apart from Chalukyan and Dravidian style of architecture.

Some of the distinctive styles are:

The temples have a star shaped base with the main structure standing on a raised platform.

There are three shrines structured around a central pillared hall, each with a tower.

Pillars with horizontal mouldings, produced by a mechanical process.

There are intricate grille windows, an abundance of sculptural details.

The sikharas unlike the northern style (parabolic) are constructed in well-defined horizontal tiers.

Getting its name from the confluence of Tunga and Bhadra in its vicinity, the village Koodli is located 9 kms from the main district headquarters of Shimoga. The Rameshwara temple is located right on the banks of Confluence of two rivers and is built by the Kings of Hoysala. The emblem of Hoysalas is installed on the top of the Gopura of the temple. This temple has an ekakuta construction with single vimana structure and an open mantapa built with Soap stone. The temple comprises a sanctum which houses a linga and the platform facing sanctum has a sculptured image of Nandi. The outer walls of shrine are mostly plain with regularly spaced slender pilasters and on the protruding tower of the vestibule is the royal Hoysala emblem, a warrior stabbing a lion.

Location: - Take a bus or a taxi from Shimoga to Koodli and the travel time is 30 to 45 mins.

This temple was exactly built in the year 1114 A.D. by a merchant of Hoysala dynasty called Kullahana Rahuta for his wife Sahaja Devi. This is the only temple with a chatuskuta (four-shrined) order of temples built during Hoysala reign. This temple is dedicated to goddess Lakshmi of who stands inside the sanctum as a 3 foot tall image. The other shrines in the temple complex has the idols of Kali, Vishnu, Boothanatha Linga, Gajalaksmi, Tandaveswara, and Yoganarasimha. The entire complex here has 9 towers and the temples here also built with Chloritic schist or Soapstone. This temple doesn’t stand on a jagati (platform) which is the usual structural way of Hoysalan temples. The lake and the lush green landscape behind the temple add more glamour to this 7 foot tall stone wall complex.

Located just around 10 kms from Shravana Belagola, this ekakuta (single shrine) temple was built by a wealthy lady named Bammare Nayakiti during the rule of Hoysala dynasty. This temple is bulged into a convex shape from outside as the inner walls are widened beyond its base. The temple is dedicated to lord Shiva standing as a 4 foot tall image. The entire outer walls of the temple has an intricate artworks of Salabhajanikas (Sculpture of a woman showcasing stylish feminine features) which decorates the entire temple in an awesome way. The large doomed roof over the tower called the helmet or amalaka has a kalasa on the top with a Hoysala crest (emblem of the Hoysala warrior stabbing a lion) over the sukhanasi.

Location: - Located at a distance of 11 kms from KR Pete, Mandya.

Built to celebrate the coronation of King Veera Ballala-2 by a rich officer called Buci, this is a simple but elegant specimen of Hoysalan architecture. Maintained under the Archaeological Survey of India, this temple also has two more temples in the form of ruins nearby. This is a Dwikuta (two shrines) in plan connected by closed mandaba with a Shiva diety in one shrine and Surya diety in the other shrine with all the features of Hoysalan architecture on the outer walls. The entrance has two small elephant balustrades in the southern face. The temple also has ornamental mini towers on pilasters in a variety of styles like Dravida, Nagara, Vesara and Bhumija.

Location: - Road off from Hassan-Arasikere road in the village called Koravangala, 10 kms from Hassan.

This Trikuta (Three shrined) styled temple is built over a jagati (a Platform) and all the three shrines are connected by a common hall. The central shrine has a linga while the lateral shrines contains nagas. This temple is a highly ornate example of the Hoysala architecture as it has same quality of craftsmanship as in the famous temples of Belur and Halebidu, though the images are smaller and simpler. The lower base of the temple near the jagati has six equal width rectangular moldings or friezes which depict hansa (birds), makara (aquatic monsters), carvings of Mahabharata and Ramayana, lions, horses and elephants from top to bottom. At the entrance to the hall are elephant balustrades.

Location: - Basaralu village in Mandya, 25 kms from the district headquarters and can be reached by public transport.

This epitome of Hoyslan architecture of long history is located at the heart of the Karnataka state in Chikmagalur. Constructed by Amruteshwara Danadanayaka, the commander of Veera Ballala II, designed by the sculptor Mallitamma suggests the beginning of golden architectural age. The main idol of this temple is Shivalinga and Sharada Devi sits next to the linga, and this temple marks the ancient architecture of Hoysalas. The temple has porch, garbhagriha, sukhanasi and the navaranga as the oldest parts and the wide hall or mantapa is one of the important parts with impressive pillars. This is also an ekakuta design temple with a tower having an emblem of Sala battling a lion. On the sukhanasi tower, visitors can also find an elaborate panel depicting Shiva slaying Gajasura.

Location: - 8kms from the nearby town Tarikere in Chikamagalur district.

This Jain temple dedicated to 16th Tirthankar Shantinatha, is located near the temple town Shravanabelagola in a place called Jinanathapura or Jainanathapura. Also called as Shanteshvara Basadi it has a rich and bold exterior panel relief, an idiom that was more common in Hoysalan temples. A Kannada language inscription on the pedestal of the seated image of the Shantinatha reveals that Basadi was built by Recana, a general of King Ballala II. Even this temple stands on a jagati or a platform and has a single vimana with an ekakuta plan and the mantapa is a closed one. According to historian Percy Brown, the features of the temple and the construction style depicts Hoysalan architecture altogether. The interior walls of the Basadi is plain but the lintel decoration over the entrance to the sanctum is elaborate and consists of five Jainas, the central of which is a replica of the image of Shantinatha which sits on a seven-sectioned throne inside the sanctum.

Location: - Reach Channarayapatna which is 38kms from the district headquarters off Hassan, and from there hire a vehicle to Basadi.

Timings of Visit: - Morning to Evening.

As told by Gerard Foekema, this temple complex is an elegant example for perfect twin in the rural set up. Located from 10 kms from the city of Hassan, in a village called Mosale, this complex has two shrines or dvikuta, one dedicated to Lord of Snakes and the other to Lord Vishnu. Each shrine or the ekakuta style here has a Porch entrance, with closed Mantapa, A sanctum, and a shikara, following all the Hoysalan style of architecture. The features on the outer walls of the shrines belongs to the old kind where the large wall images of deities like Sridevi, Lakshmidevi on Nageshwara temple and images of Garuda, Keshava, and Venugopala on Chennakeshava temple.

Location: - Located in a village called Mosale, which is 10 kms from Hassan HQ.

Located in a village called Belavadi, 29 ksm from Chikmagalur, this temple is one of the finest examples for Hoysala architecture having three vimanas, with one older shrine in the middle and the two other shrines face each other in a long Mandapa. The outer walls of these temples have running pilasters with decorative towers on the top and are beautifully carved. The Northern shrine here has a seven foot tall idol of Yoganarasimha in a sitting posture with Sridevi and Bhoodevi on either side. The Prabhavati here is carved with the ten avatars of Vishnu. The southern shrine has an enchanting eight foot image of Venugopala Krishna blissfully playing his flute and Gopikas and Shravan Kumaras around. The superstructure over each of three shrines is connected to a low protrusion tower called Sukanasi which in turn has two tiers of decorated miniature roofs. The place Belavadi is also called as Ekachakranagara, is said to be the place mentioned in Mahabharatha where Bheema killed the demon Bakasura and protected the village and its people.

Location: - Located in a village called Belavadi, which is 10 kms from Halebidu.

The temple dedicated to Lord Shiva is an ekakuta in structure, but looks like a trikuta with two simple shrine like structures with the main shrine. The decorative ornate around the walls are of new kind where the first heavy eaves runs below the superstructure and all around the temple with a projection of about half a meter. The second eaves runs around the temple about a meter below the first. In between the two eaves are the miniature decorative towers on pilasters. Foekama, states that in some places the frieze work is incomplete compromising its overall articulation.

Location: - Located in a village called Haranhalli, which is 35 kms from Hassan.

Built by the King of Hoysala Vira Someshwara, this temple is dedicated mainly to Lord Vishnu and is located near to other masterpiece of Hoysalas, The Someshwara temple in Haranahalli village in Hassan. The temple stands on a platform and consists of a sanctuary with projecting subsidiary shrines on three sides adjoining a mandapa laid out on a stellate plan. One central flight of steps lead to the doorway of the hall and two lateral flights of steps lead to the platform. They are flanked by a pair of miniature shrines. The outer walls are completely covered with carved friezes and panels in chlorite. The most intricate carving is towards the bottom of the walls, particular note should be made of two freizes, one depicting horses and the other, elephants. The pyramidal superstructure rising over the sanctuary is made of diminishing storeys of ornamented elements.

Location: - Located in a village called Haranhalli, which is 35 kms from Hassan.

This temple has Trikuta Vimana (three shrines) structure, with three shrines together make the whole temple and only the central shrine has a gopura (temple tower) while the other two buildings have flat ceilings. Built on a jagati (platform) which is one of the prominent features in Hoysala temple architecture, Lord Vishnu is the main deity and is known by the name Lakshmi Narayana (the consort of Goddess Lakshmi). All the sculptures carved in the temple are mainly related to Vishnu as it is a Vaishnava Temple. Several scenes from the Hindu mythological tales like Ramayana and Mahabharata are carved on the walls of the temple. Each of the shrines have sanctums with the idols of different forms of Vishnu: Venugopala, Lakshmi Narayana and Lakshminarasimha.

Location: - Located in a town called Hosaholalu in Mandya district, and is 45 kms from Mysore.

So, next time you visit to any of the districts like Hassan, Chikmagalur, Mysore, and Mandya don't miss out to visit these architectural marvels by Hoysala Kings.