It was a bore Sunday morning so I decided to venture out with couple of my friends. I called up my friend 'Gowda' and expressed my interest to go on a drive, "But where to go?" My friend Gowda asked me.I told lets go somewhere around Hassan(hometown) so that we can comeback by evening. Then he continued "Ok. How about some temple where we can spend some peaceful time". I replied '' Why not? Shall we go to Belur or Halebidu? They can be a great place for photography too". He agreed and then we decided to meet an hour later.

He brought his car with his cousin and later three of us decided to visit Hoysaleshwara Temple of Halebidu. We started at around 11 a.m and reached Halebidu at 11.45 am, covering a distance of 30km.

Since it was Sunday the place was little crowded as expected but somehow we managed to find a place for parking the car. Then we moved towards the temple complex which was at a walkable distance.
We explored the temple using a guide who explained the historical facts and sculptures in our local language. He took around 30-40min to complete then we spent an hour to explore the things on our own. We also took some photos.

Why you should visit Halebidu? (info at www.karnataka.com)

*If you can list 7 wonders of India, then the Hoysaleshwara Temple of Halebidu will surely be one in the list, such is the prominence of this architectural wonder which is also enlisted in the UNESCO world heritage list.

*The Hoysaleswara Temple is a temple dedicated to Lord Shiva and is located in Halebidu (Halebeedu or Halebid), Hassan.The temple has exclusive carvings and has a plan with two shrines, one for the King and one for the queen.

*It has about thousand figures on the walls which depict scenes of Mahabharata and Ramayana.

*It reflects the Hoysala architecture and was built in soapstone. The outer walls of this temple have intricate carvings and the temple has been described as an outstanding example of Hindu architecture.

How to reach Halebidu?

Buses and trains are available from Bangalore/Mysore to Hassan. From Hassan board another bus for Halebidu or hire a cab from Hassan to reach Halebidu.

Things to keep in mind

2)When you visit the temple/monument it is better to hire a guide because there are so many hidden and minute sculptures not easily visible. Also there are certain fascinating historical facts related to the monuments you cannot find in any history books.

4) Good Hotels and Restaurants are available in Hassan(30km) and not in Halebidu.

5) Monument is maintained by Archeological Survey of India and littering is strictly prohibited.

Other places to visit near Halebidu 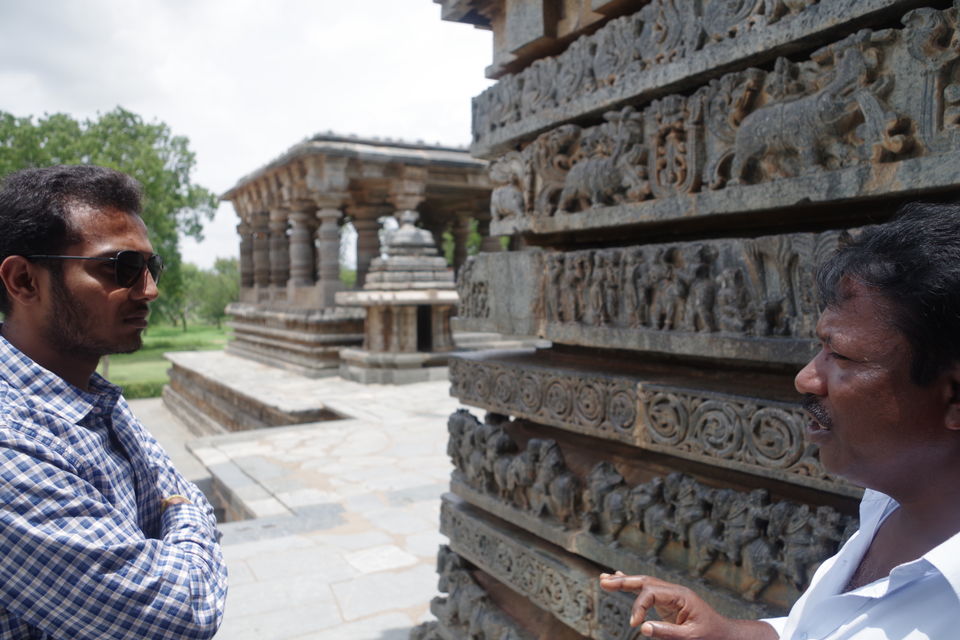 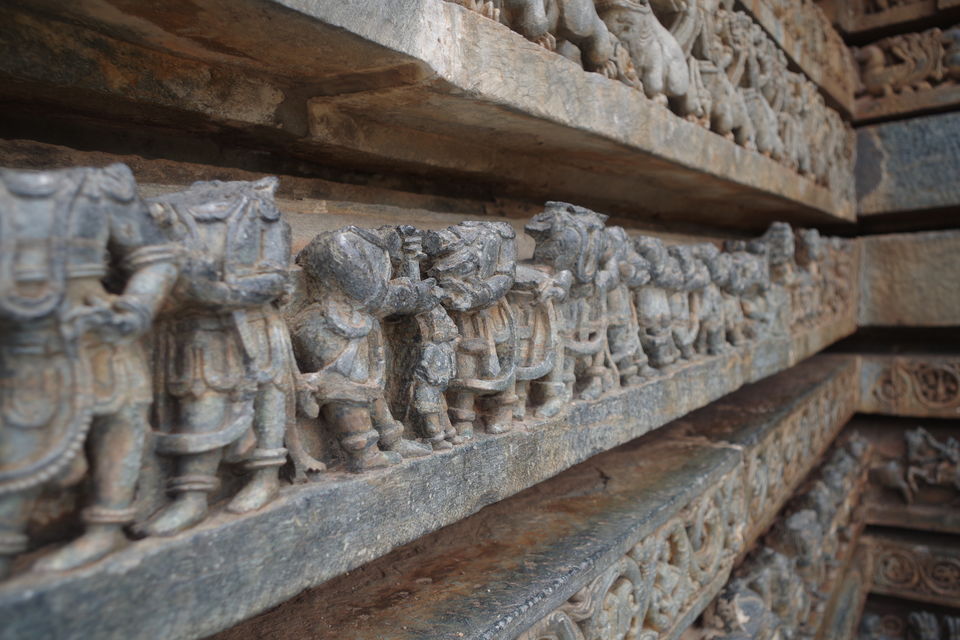 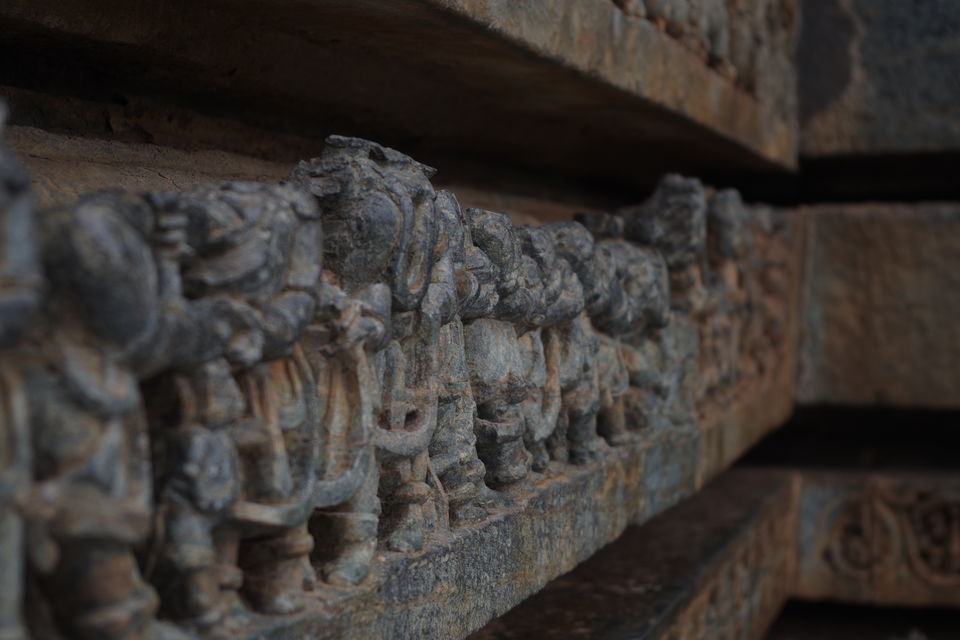 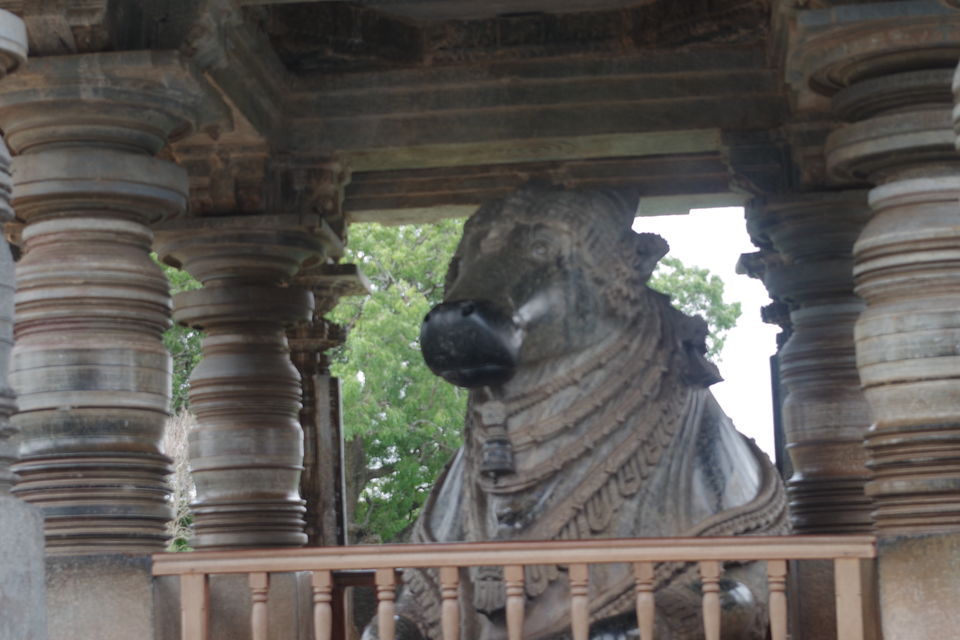 A view inside the temple. Engravings on the pillars can be seen.©Raghav 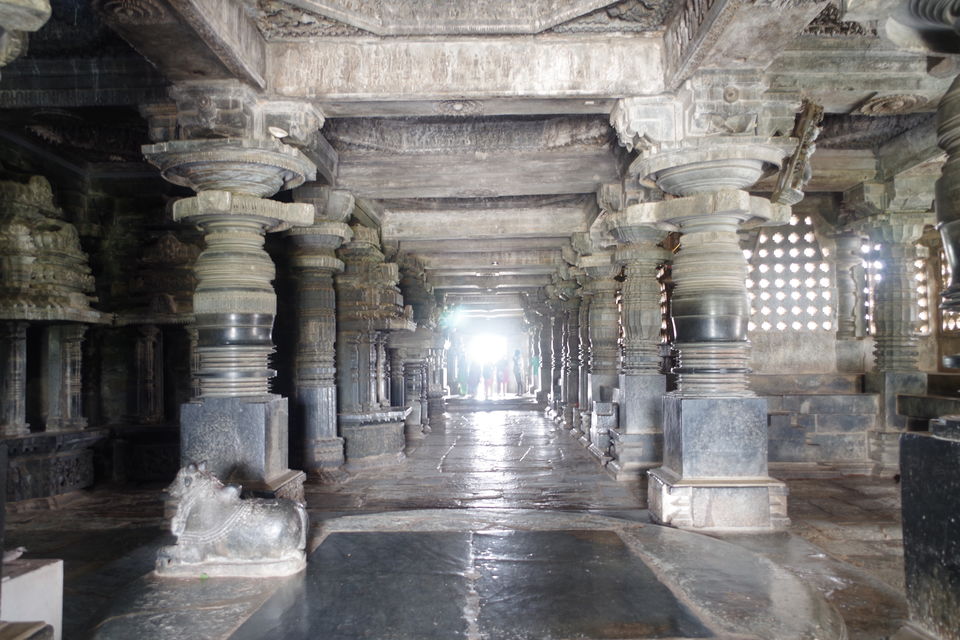 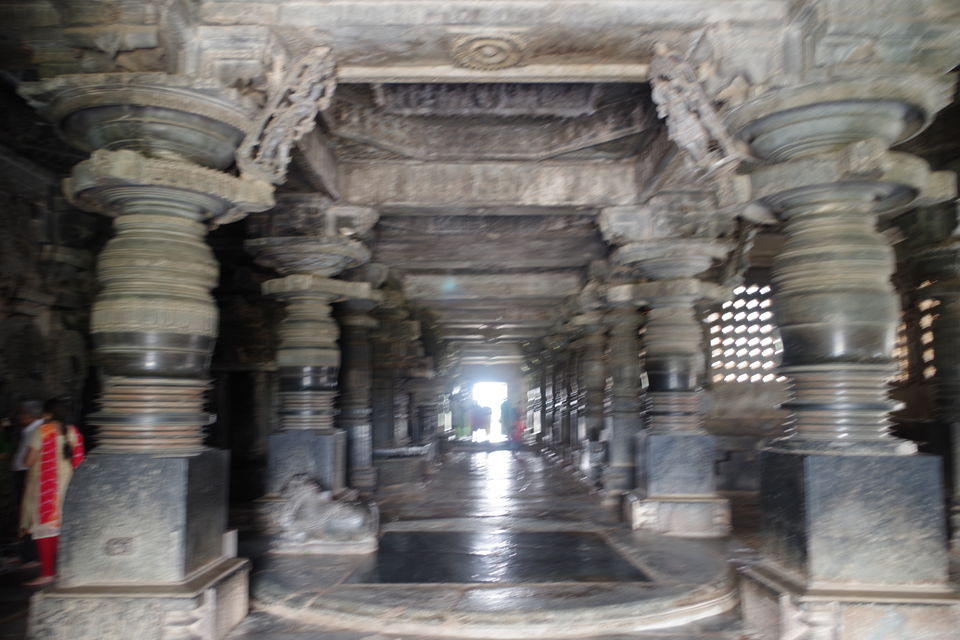 A Tourist posing at the entrance.©Raghav 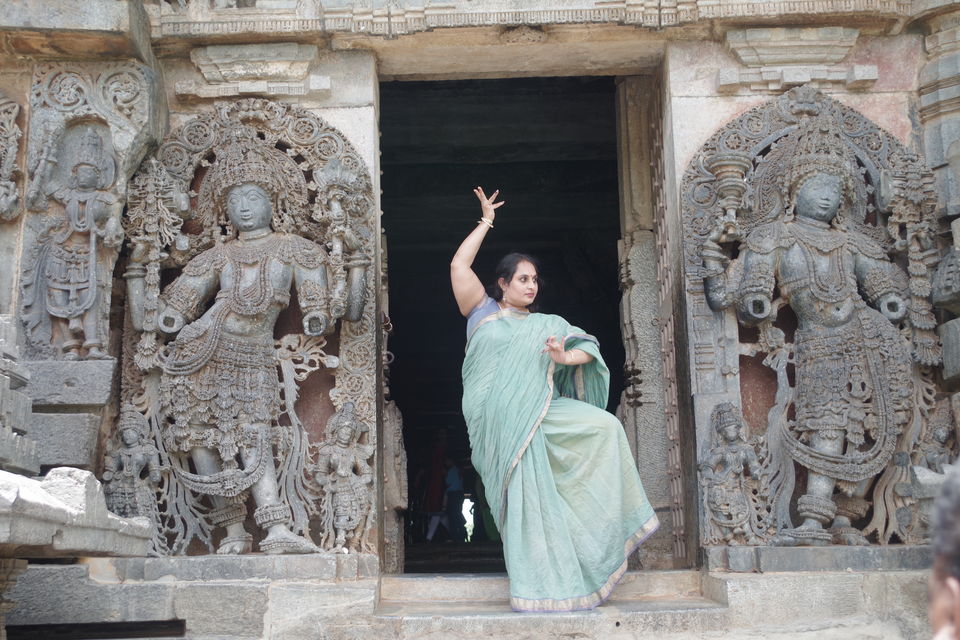 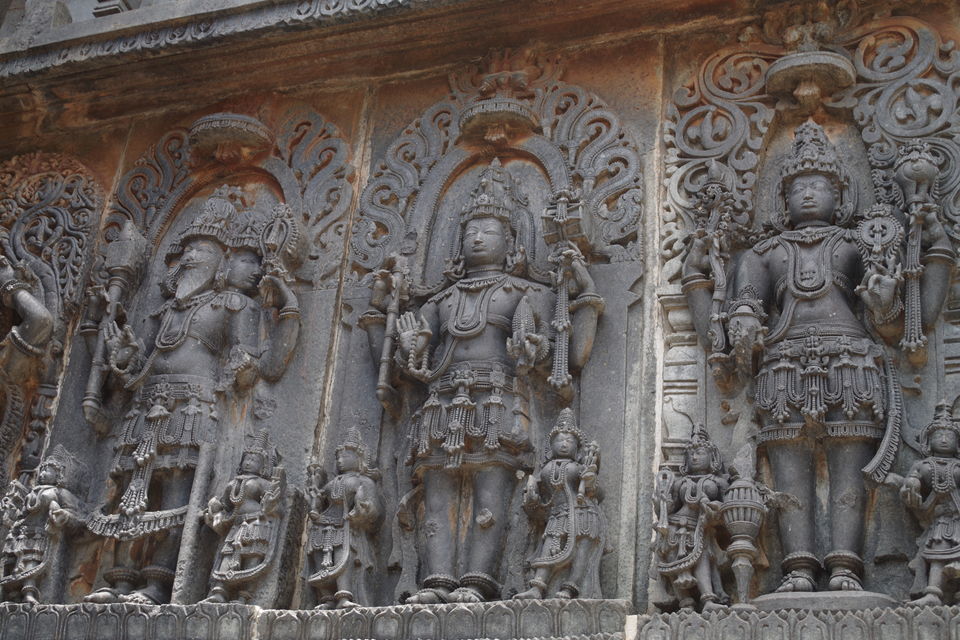 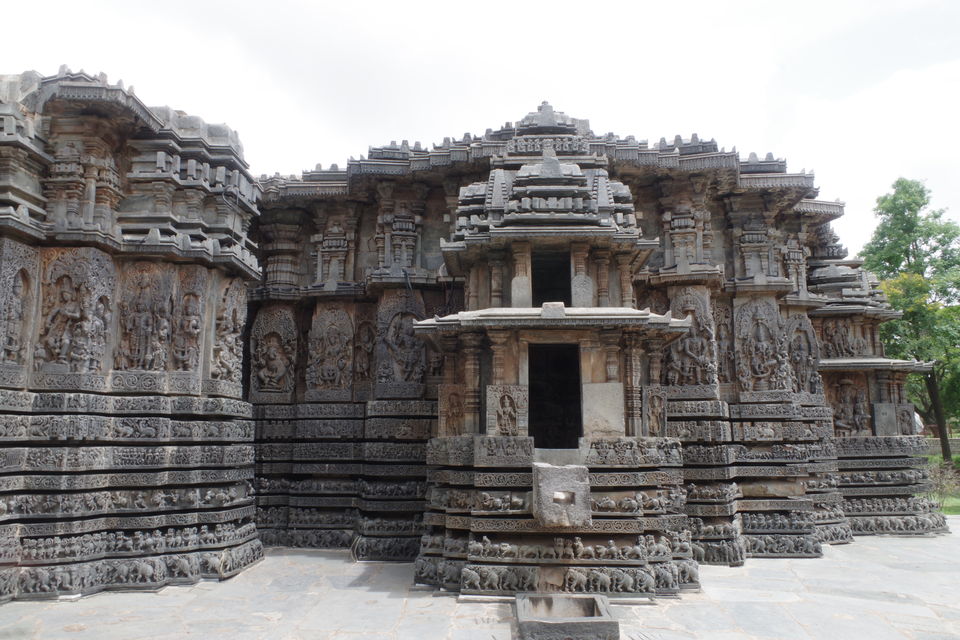 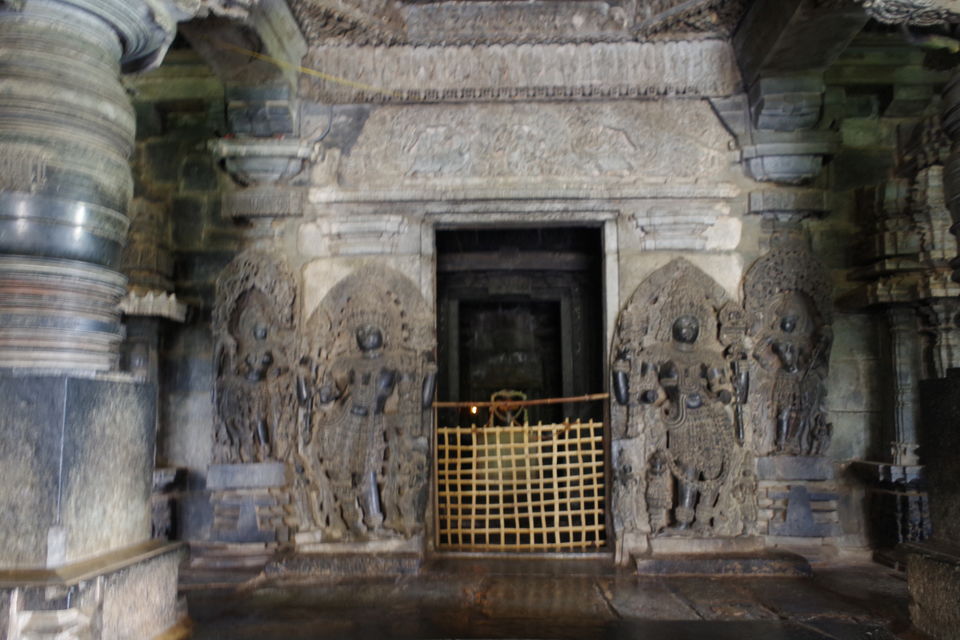 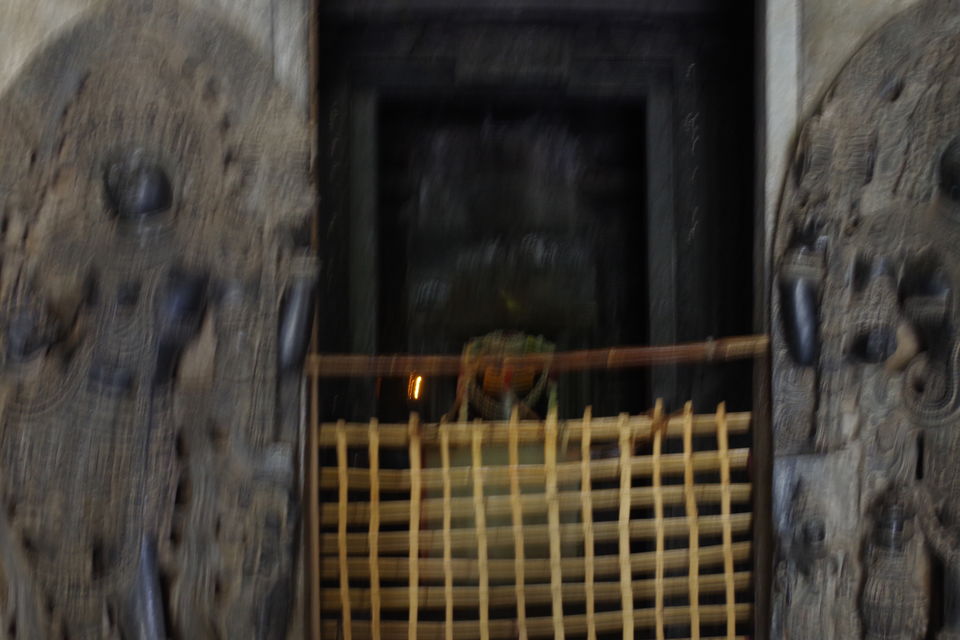 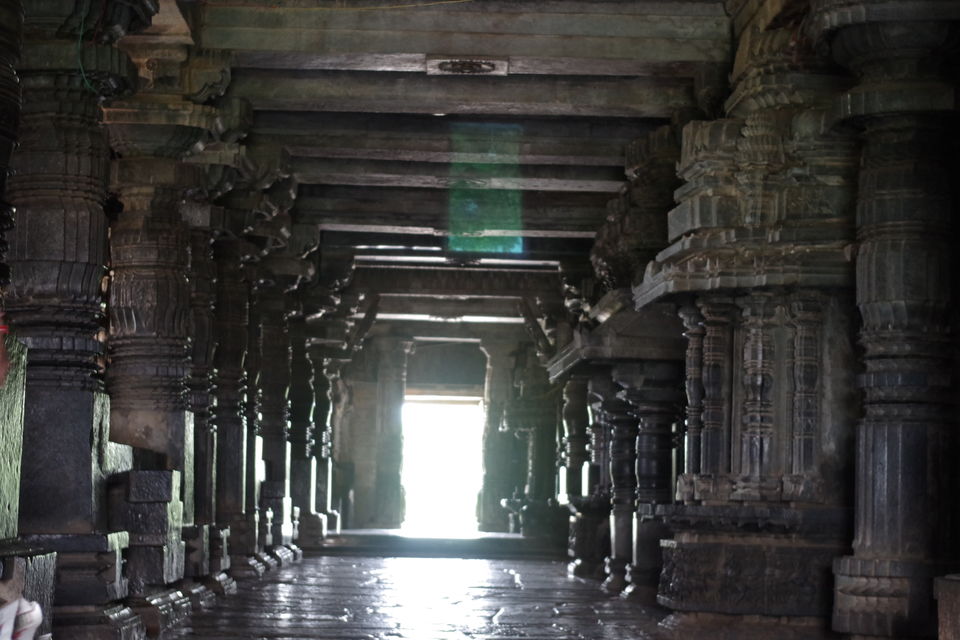 Artistic Pillars and roofs of the temple©Raghav 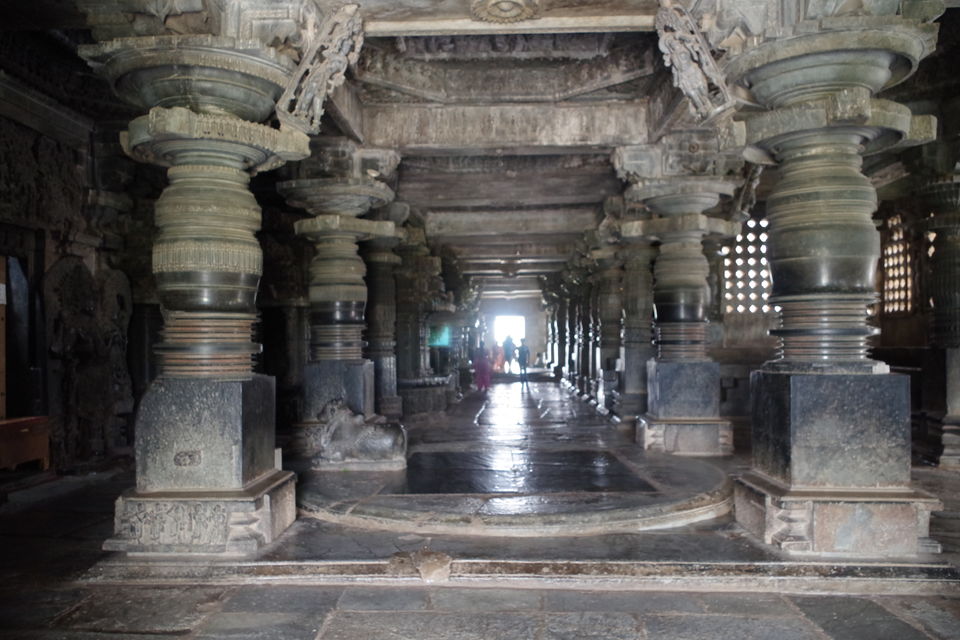 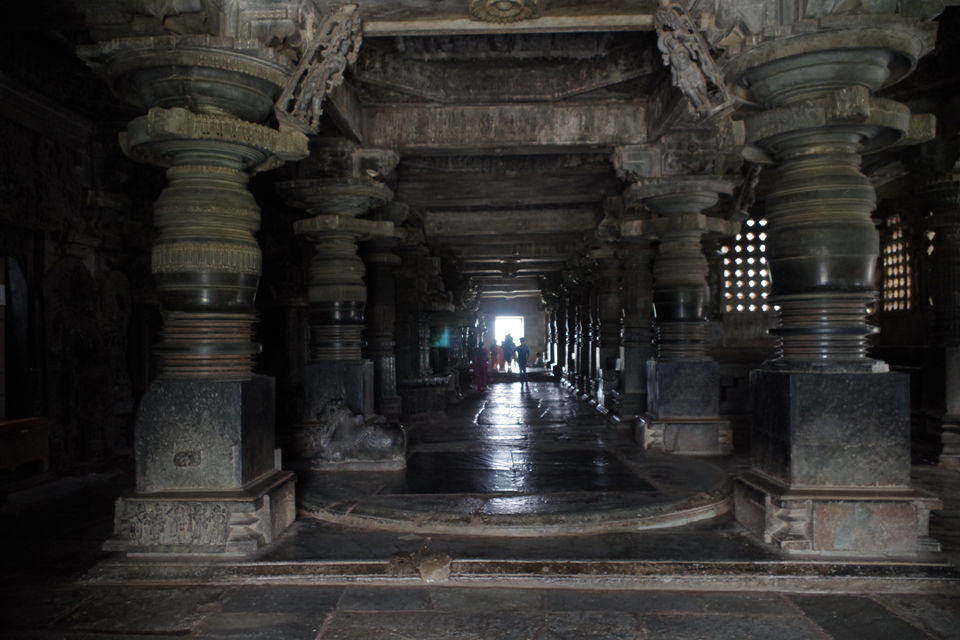 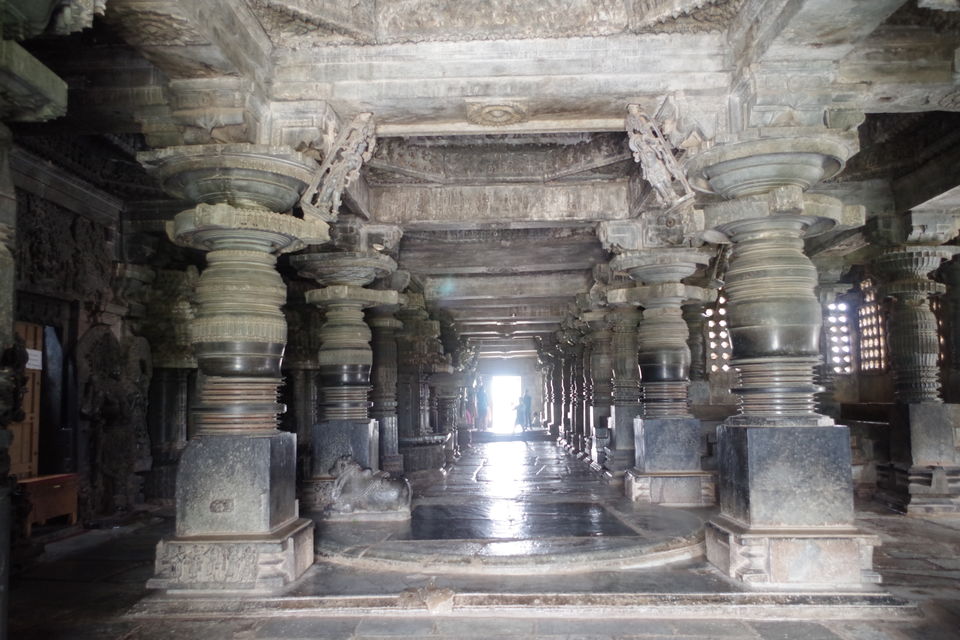 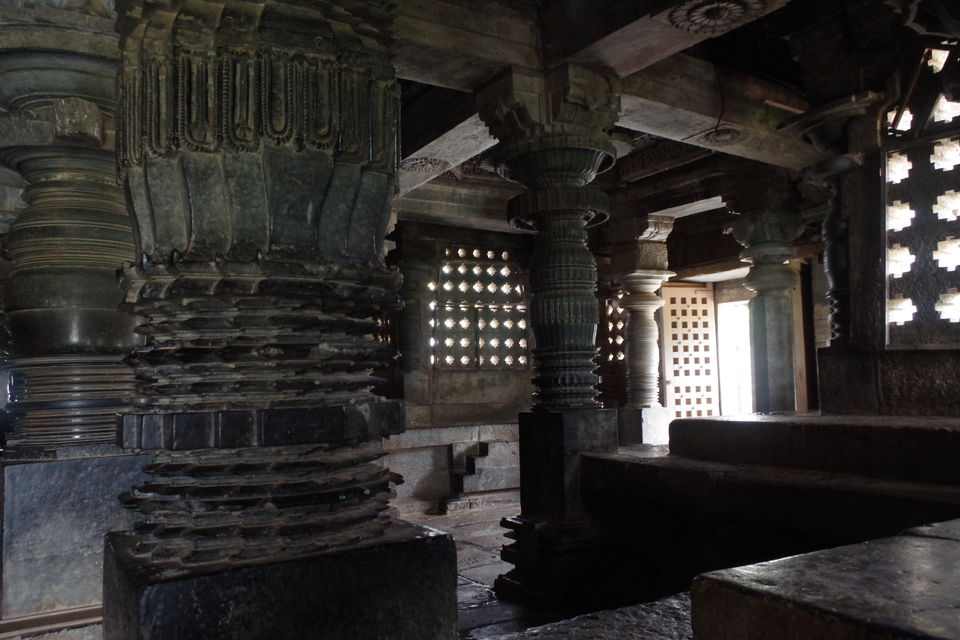 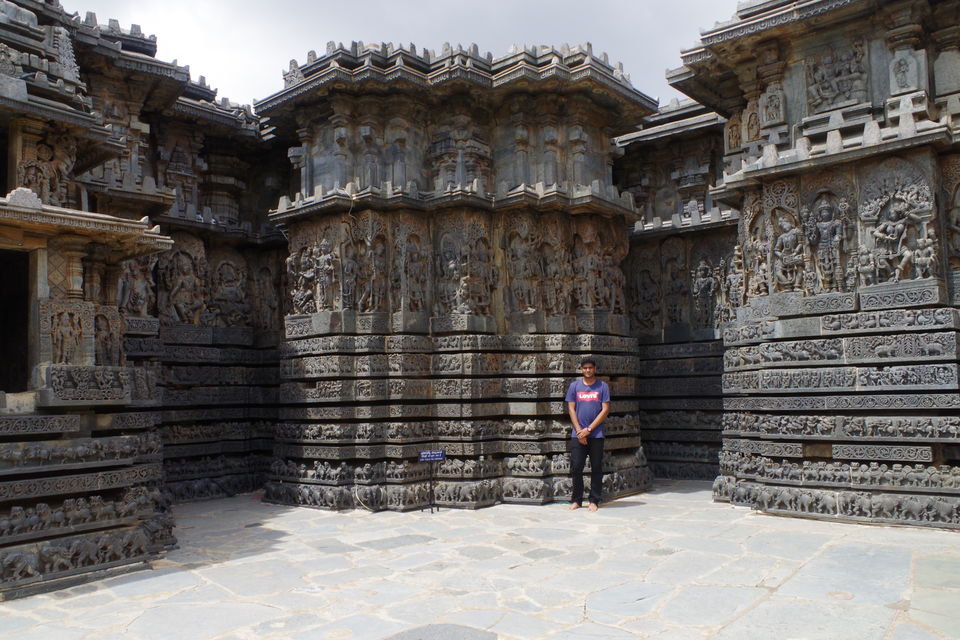 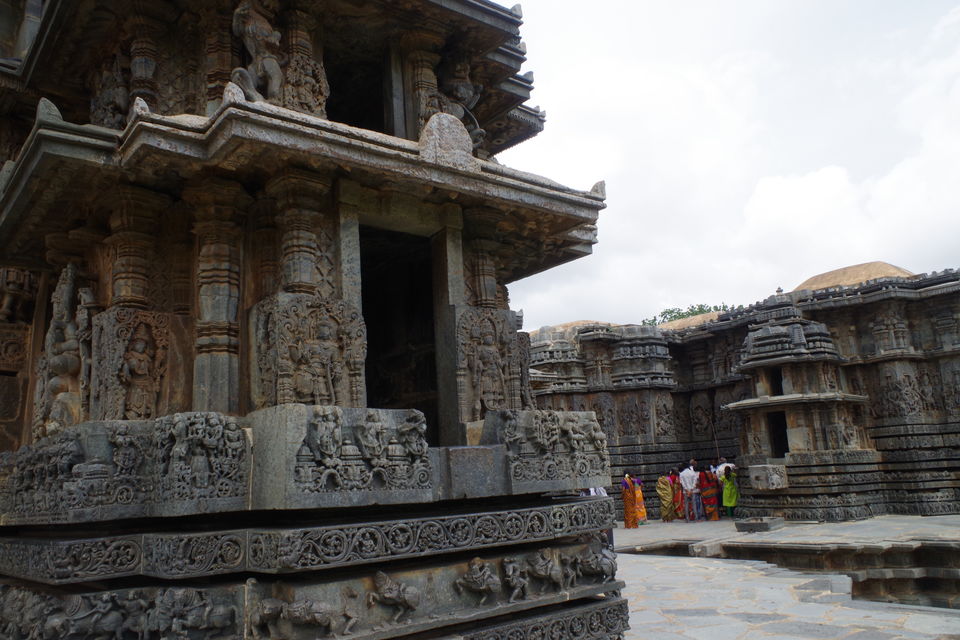 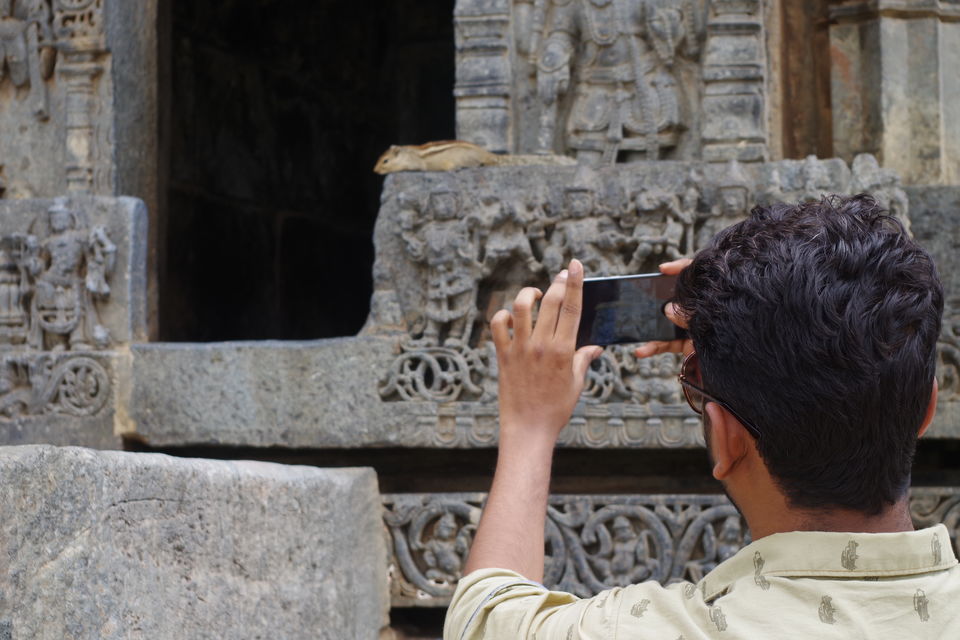 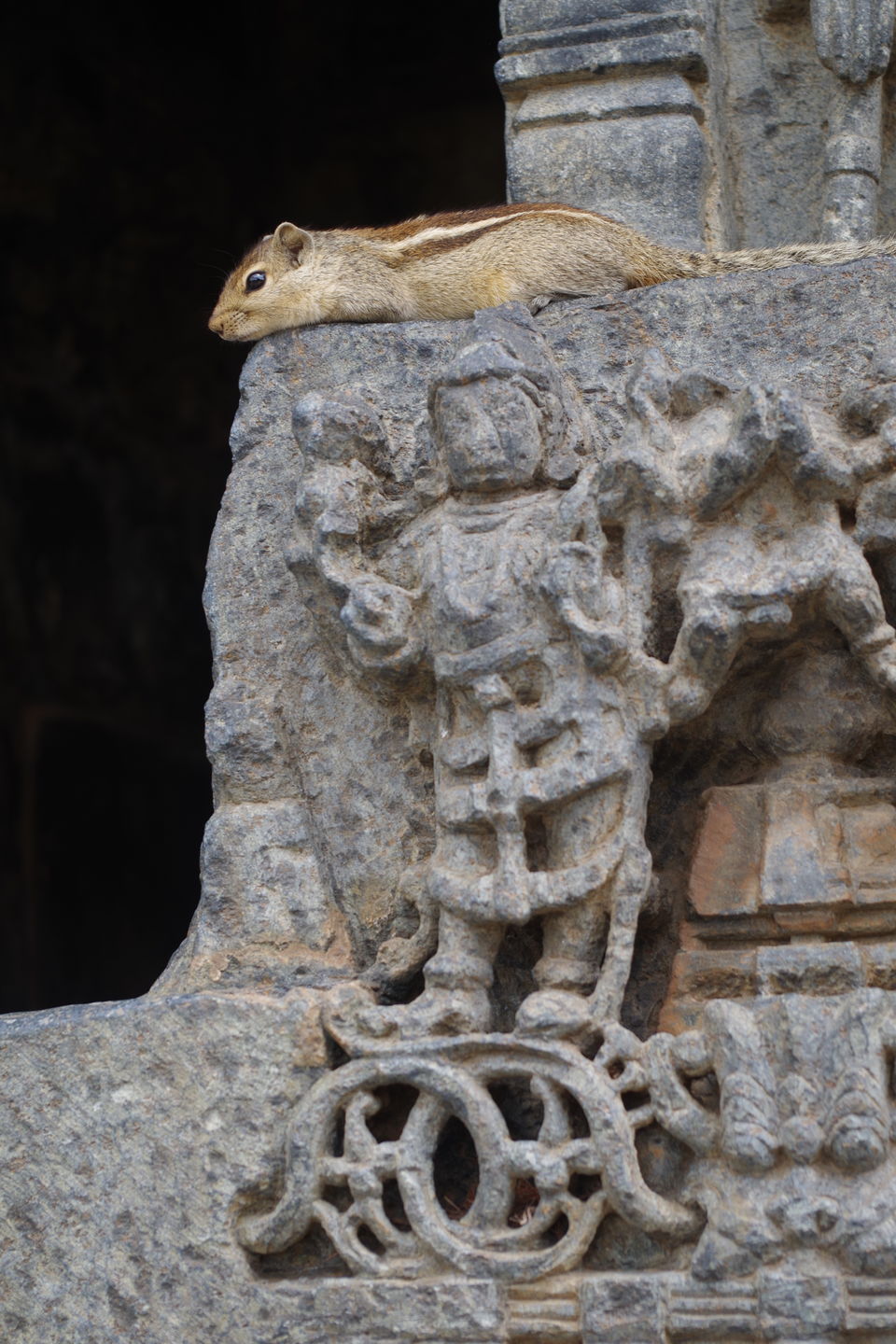