grind of the roads which, surprisingly was much easier than when we came

back... Maybe it was the sun whch irritated us when we were driving to the

Mara. On the way back the day was just perfect for a drive - really pleasant

kms was quite good.. Road was nice and we reached the Lion's Gate Lodge

at 4 pm for the flamingoes and rhinos.

Lake Nakuru is a place known for flamingoes, pelikans and storks - it is

45 diff types. It is also known for baboons

and of course the rhino reserve.

Baboons r a diff species of monkeys. Their one scratch can make a human very

also baboons on the way to the lake.. From there we went to the other part

from there of the entire stretch of the lake and the hills... Beautiful

We felt this place could hv been skipped...but the issue was that the

way too long to cover at a stretch - arnd 600 kms...hence the break was

veg and jain food but somehow the taste was not to our liking...though we

shd not complain since it was much better than expected.

equator... We took a break at 0 deg latitude (place whch they claimed where

water changes its direction in north, south and at equator!!

thru and put a matchstick into it. The matchstick moved around in clockwise

direction in the container. Then he took us to the south of 0 deg... And

matchstick did not swirl at all but just kept floating!! Great thing to

experience ... Yes, we had officially been at the centre of the earth!!!

stretch of terrible road.. 19 kms. We were gettng restless by the massage

kind. This stretch of 19 kms was a private field whch we were cutting across

simply huge..We did not realise what our guide told us till we reached there

arnd 1.30pm. It was a beautiful property on a huge expanse of barren land

with tents.. But what was exciting was that our tents were right next to the

was not the dense type - but the Savannah type).. So sitting in our tent we

could see the animals moving around...

Obviously that area was huge and the

animals were scattered far and wide... But there was a water body in front

animals.. In fact some large different species of birds used to move around the

The gazelles were constantly moving around in front of

our tents and so were the wild boars.. They had lions, leopards, rhinos,

african elephants, jackals, etc - all inside the area of 80000 acres (yes,

80k - I hv not added a zero by mistake). Since this was privately owned (as

them during game drives. Lion tracking was $45 per person and entire night

of these at the Mara and tht too naturally - without any transmitters.

the same height whch was electrocuted... - whch means there was no

obstruction of sight and the ground was at the same level...Believe me the

side. It was an experience of a life time- such a thrilling one - only the

thought of it - even if we do not spot any animal - isn't it?

each other and would hv a fight if kept together. But apart from this they r

Apart from groupism, they hv another 98% traits whch r like humans -

basically, they r just 1 chromosome away from humans. I hv taken pics of

some more interesting facts whch they had put up there.. U guys can check

Chimps live upto an age of arnd 45 yrs to the max ..and feed on corns and

its mouth is shaped.. Its wide. But in 18th century, the dutch settlers

rhino). The rhino park - The Olepetja Conservancy' was a place for just one

rhino - 'Baraka' who was a 17 yrs old black rhino but completely blinded. 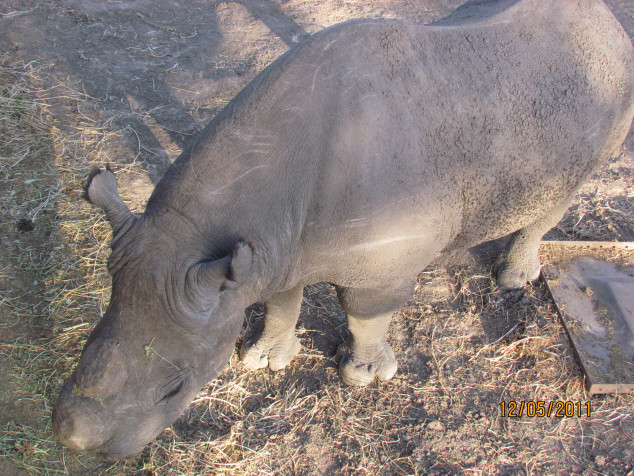 Baraka has to be seen to be believed.. Close to 1.5 tonnes (normally black

could touch him, feed him and had a ball - especially the kids!!

about not only rhinos but lot of other animals. We saw skins, skeletons of

so many diff animals, ostrich etc. There were 20k rhinos in kenya in 1970,

to the efforts of people.

night... We were moving towards our tent and just 15 feet away from us was

the rhino drinking water in the waterbody !! Great!!!

everything.. What happened next was the most thrilling experience - we

that.. We spotted a lioness running behind these gazelles.. What a sight!!

Maybe due to our noise the lioness retreated back into the dark... But I m

The day started with a beautiful sunrise... When we were getting ready to

move, we saw a giraffe come towards our side...

And it came again very close

to our tent and was stretching himself for a long time... We headed to the

restaurant for breakfast and left from there after shpng at souvenir shop.

Then was the most amazing experience at the Mt Kenya Orphanage. This was

exorbitant and hence skipped it. But what we did inside orphanage was

a typical species of antelope whch is now extinct

and only seen inside this orphanage in the whole world. We fed gazelles,

rode on 100 year old turtles, moved arnd the park with the ostrict, fed one

diff species of monkey on our shoulder!! We also saw a cross breed of horse

and zebra and is called zebroid.... Its brown in colour.

we thght we could skip - we ended up spending more than 2 hrs...

We left from there towards Nairobi. Reached at 7.30 pm after 2 hrs of dirty

and dusty traffic near the city... This place is really

underdeveloped...when u look arnd u see lot of poverty and things happening

the way it used to happen 20 yrs back maybe! I had got this feelng on

arrival itself at the airport..

spend less than 12 hrs there we did not mind.