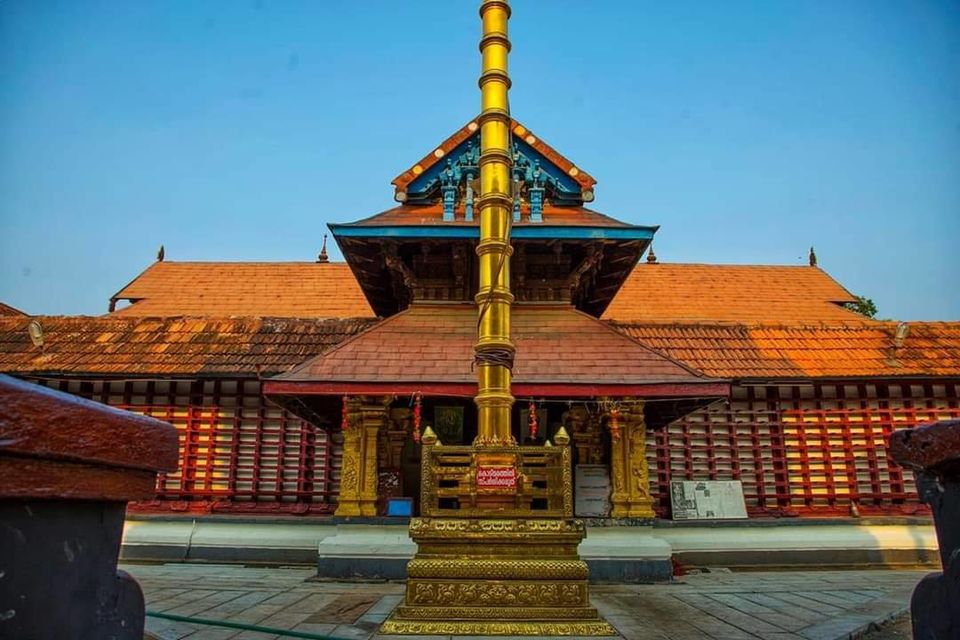 Thiruvarppu – a small village in Kottayam district and is 8 km away from Kottayam town, in the state of Kerala, and is well known for Thiruvarppu Sri Krishna Temple, located on the coastal line of the Meenachil River (Varppu means the cast used by smiths to make bell-metal vessels). Thiruvarppu Sri Krishna Temple is dedicated to Lord Krishna, this is one of the renowned Vaishnava temples in Kerala and one of the famous ancient temples of Lord Krishna which is at least 1500 years old. The inscription on the temple indicates that the temple was constructed around 850 AD and the temple attracts large numbers of devotees during an annual festival called Vilakkeduppu which is held in the month of April for 10 days.

Thiruvarppu Krishna Temple is the only temple that opens its door early in the morning i.e., every day at 2 A.M. As soon as the temple is opened, a special offering called Usha Payasam is offered to the deity. Soon after the Abhishekam, the deity's hair is first dried, Naivedyam (Usha Payasam) is offered to him and then only the rest of the body of the deity is dried. So that he doesn't remain hungry. It is said that Lord Krishna is always hungry in this temple, so unlike other Hindu temples, this Thiruvarpu Krishna temple is not closed even during the eclipse, the reason is once the temple was closed at the time of the eclipse but later when the temple was reopened the very next day, they saw Lord Krishna's waist ornament (Bhagavan's kamarbandh) slipped down. Adi Shankaracharya, who came at that time to the temple, said that this happened because Krishna was very hungry. Since it is believed that Lord Krishna cannot tolerate hunger, the priest of the temple possesses an axe along with the keys to the temple to open the Sree Kovil. The priest has the authority to break down the lock of the temple door if there is any delay in opening the door after a couple of minutes. 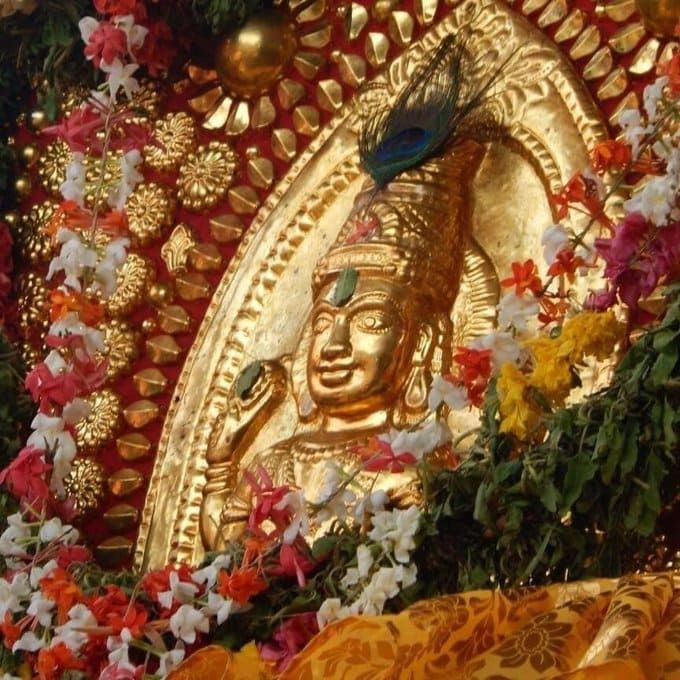 One of the most popular beliefs about the temple is the recovery of the deity of Lord Krishna having four hands coming into existence, which was placed in an Uruli, a flat vessel made out of bell metal. Almost all the ancient temples and religious sites have some folk, myths, and stories about them, including Thiruvarppu Sri Krishna Temple.

According to one myth, the temple relates to the epic Mahabharata. It is said that while the Pandavas were in exile for 14 years in the forest, Lord Krishna gave them his statue so that they can worship it daily. When the Pandavas had completed their Vanvasa and wanted to go back, the people of that area (said to be people of Cherthala(Sherthalai)) requested that idol but after some time due to the circumstances, the people were not able to worship the Lord, Krishna. So, they simply dropped the deity in the sea.

After many years, a holy saint (Some say it was Villwamangalam Swamiyar and others say it was Padmapadacharya) was traveling by boat in these parts, suddenly his boat got stuck at one point. The Sage got out of the boat to find the reason but when he stepdown he found that the portion where he stepped upon became dry and the sage found the idol of Lord Krishna underneath. This divine Sage took the idol with him even though he must travel towards the west, but the boat and waves took him towards the east via Kunnam and Pallikkara and reached the present location of the temple. The holy sage on reaching the shore found a temple of Dharma Sastha without any idol and hence he consecrated the idol in that temple. Later, the people started worshipping the idol of Lord Krishna which is now known as the Thiruvarppu Sri Krishna Temple.

Another story is that the Pandavas after completing their Agnatha Vasa deposited the deity they were worshipping along with their Akshaya Pathra in the sea. Sometime later, some fishermen fishing in the Vembanad backwaters at a place near Vechur (called Mangalathu Vila) recovered the deity without the uruli and built a temple in a place called Chara Mangalam and consecrated the idol there. Soon, natural calamities attacked the place and the idol was washed away by the water, this time the idol fell directly into the vessel itself. As earlier mentioned, the sage Villwamangalam Swamiyar as referred above, recovered the idol while crossing the sea. On reaching the shore, the uruli along with the idol inside was temporarily placed in Valiya Madam. During those days, people were able to offer only mango pickles and coconut water to the Lord. Later, the idol was shifted to the present place. During the Arattu, the idol is taken to the Valiya Madam and the practice of offering mango pickles and coconut water is still carried out even today.

Another myth is that the above holy sage got down from the boat along with the idol but he was unable to proceed any further due to inclement weather. So, he kept the idol in an Uruli and went away. Later when he was returning, he found that the idol had got fixed to the Uruli and that Uruli belonged to an individual called Kunnan Kari Menon. As soon as he heard about this incident, he gave the land for temple construction and completed the temple with the help of a saint called Madappurathu Samiyar. Even today, in this temple a special Pushpanjali (offering of flowers) is done on behalf of the Asram of Madappurathu Samiyar. 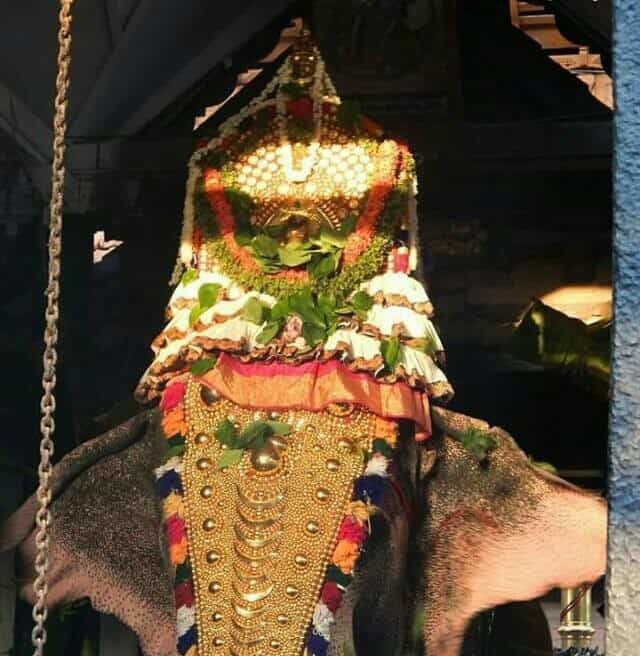 The Lord faces west along with his four hands. The temple sanctum usually opens very early in the morning like around 2 A.M. and by 3 A.M. a special offering called Usha Payasam is offered to the lord. Usha Payasam is prepared by using rice, jaggery, ghee, red banana fruit, and dried coconut. This method of preparation is very peculiar in this temple. Soon after the Abhishekam, the deity’s hair is first dried, Naivedyam (Usha Payasa) is offered to him and then only the rest of the body of the deity is dried.

Another peculiarity of this temple is that the priest is given an axe along with the keys to open the sanctum door in the early morning. People believe that the deity cannot tolerate hunger (as he is exhausted after killing Kamsa) and if there is any delay in opening the sanctum door with the keys, the priest is permitted to break the door with an axe.

Total five times of pooja is done, but the Deeparadhana is only after the Athazha pooja (the last pooja is carried out at 7 PM). Since people believe that the statue came from Cherthalai, the priest after the Athazha pooja asks “Is there anybody from Cherthalai here who is hungry?”. It is believed that nobody from Cherthalai in the temple should go hungry. The Thiruvarppu Sri Krishna temple attracts large numbers of devotees during an annual festival called Vilakkeduppu which is held in the month of April for 10 days. During this ten-day festival in the Temple, all the girl children who are below 10 years of age dress up as Lord Krishna and offer lamps to the Lord both during the morning and in the evening.

In this Thiruvarppu Temple, the Lord Krishna idol is placed in the center and all four sides are surrounded by other idols. Kochambalam, the Devi temple, is situated on the east of Lord Krishna idol. The Shiva temple known as Shivan Kovil is situated north of Lord Krishna as well as the idol of Narasimha Swamy is established near the Shivan Kovil. To the west of Krishna’s idol lies Ganapathy, Subrahmania, and Sastha temples, and to the south lies Yaksha Gandharva temple.

Places To Visit In & Around

Multiple bus services are also available between Thiruvarppu and other villages in the Kottayam district. The temple is located, 210 m from the Thiruvarppu Terminal Bus Stop.

The nearest railway station is Kottayam which is located at a distance of 8.2 km from the temple.

The nearest airport is Cochin International Airport which is located at a distance of 90 km from Thiruvarppu.