A grand temple built on a high platform, four shrines at the four corners. The main temple is at the centre and at the entrance near the steps you see sculpture of a man Man fighting a Lion- a symbol of the Chandela dynasty. A dancing Ganesha with musicians at his feet is placed on the South East side of the temple. Sculpture of Apsaras, maiden, women washing her hair and more adorn the temple wall. With fantastic detailing the sculptures are made with every detail. The sanctum includes a statue Durga killing Mahishasur. The main idol is that of Vishnu, and the idol has three leads and four hands.Another fascination of the Lakshmana temple is the roof of the temple which is also known as ardha mandapa. The roof lotus motifs with four concentric groups while the support beams. 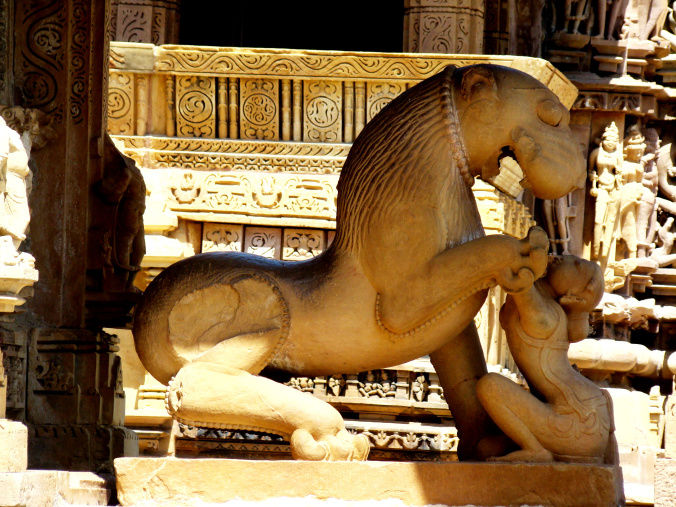 Dedicated to Lord Shiva this temple enshrines the ‘linga’. This 31m high temple is the largest and most typical in the series of temples with exquisite carvings that have some intricate craftsmanship. Each stone that is carved sees the finesse of these craftsmen and their eye for detail. Sculptures depicting divine deities, celestial maidens, eternal lovers, gods and goddesses adorn the walls of the temples. 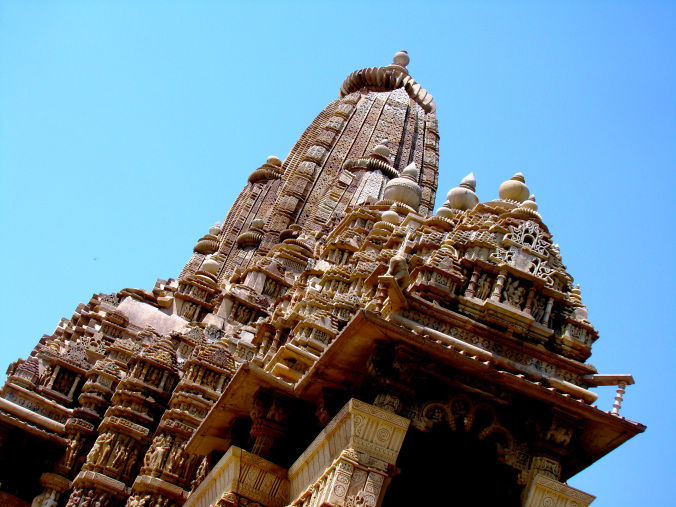 Dedicated to the Sun God (Surya Dev) this temple faces east, the side of rising sun. A five feet high image the deity is their in the inner sanctum on a driving a horse-drawn chariot. This temple is where most of the dance performances take place for the Khajuraho Dance Festival. 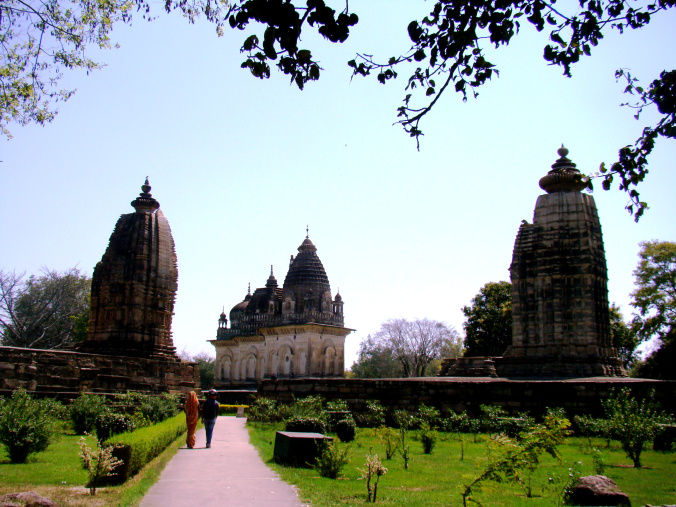 Build on lofty plinth, the Varaha shrine rests on fourteen plain pillars which houses a Yajna Varaha (incarnation of Vishnu) idol. All over the idol multiple figures of gods and goddesses are carved. The ceiling has lotus flower with exquisite detailing. It faces the Lakshama temple. It’s said that this temple was built by Yashovarman. The serpent Sheshnag is their at the pedestal. 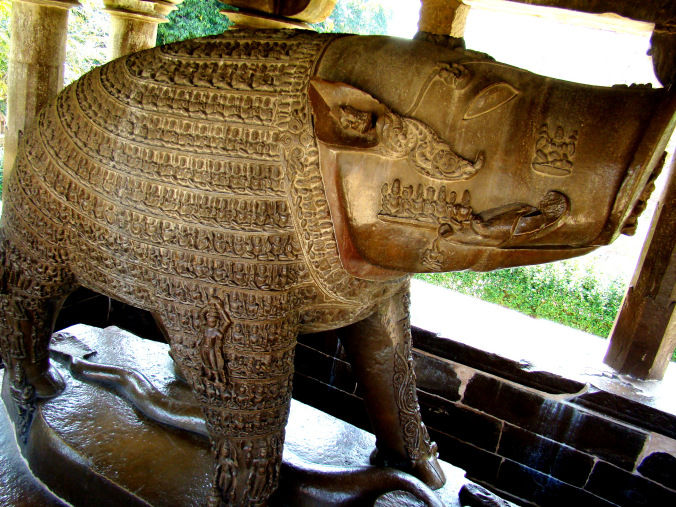 This temple is shut now and no visitors can visit inside. On either sides of the entry you can see streams of Ganga and Yamuna. 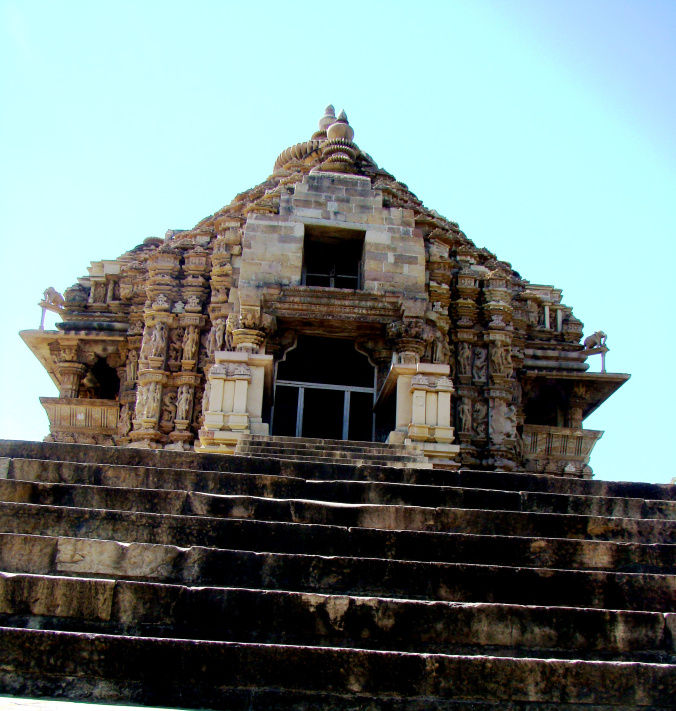 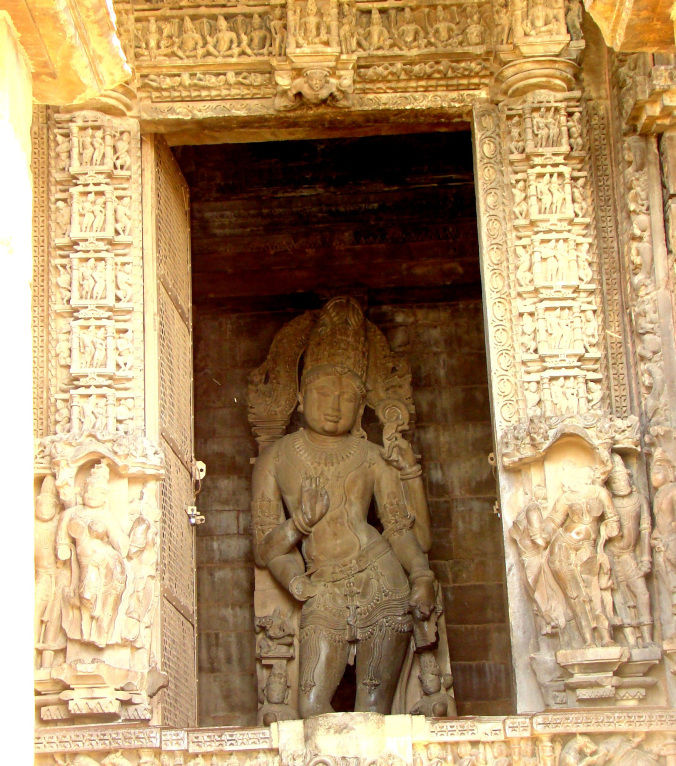 These 10th-11th century temples have a very interesting legend behind them. According to popular beliefs, Hemvati, the daughter of Hemraj was bathing and this attracted the attention of the Moon God, who then descended to earth and seduced and ravaged her. Their union gave birth to Chandravarman, founder the Chandela dynasty, and from then Chandravarman went on to rule Khajuraho.

The fine finish of these carving leave you spellbound and one of the most famous sculptures is a man, pleasuring three women at the same time. This is a combination of Yoga, Tantric Sex and the Karma Sutra. The sensual world got a lot from India.

With the sense of beautiful aesthetics these artists created magic. Each female figure carved pretty voluptuous and strong shows that even then women were quite powerful. Not in many places in the world one can see such both craftsmanship of sculptors.