On the way up to the top, one can witness the weapons and armory used at the time. A heavy arsenal, literally and figuratively, each of the weapons weigh about 20-30 kgs and it is said that an average person than would practice with them for 6-8 hours a day. Clearly shows the strength in the limbs of our ancestors. The highest point of the fort stands on the edge of the 3000 feet high cliff. The place known as Punishment Point, was used execute the criminals by throwing them down the cliff. A spine chilling place even now as the cool breeze equivalent to that of an air conditioner with temperature dropped to the lowest. And the view is worth dying for!

Among all the tales, the fort is well known for one due to which its name is derived. ‘Pratap’ means victory, and the name of the fort is dedicated to the victory of Chhatrapati over the Mughal General Afzal Khan.

Chhatrapati Shivaji’s contemporary ruler was the Mughal Emperor Aurangzeb, who had placed a handsome bounty on Shivaji Maharaj’s head. Afzal Khan was the Mughal General in the Deccan region and he accepted the challenge to defeat Shivaji Maharaj. Setting out a message of peace proposition to Chhatrapati at Pratapgadh, Afzal Khan had planned to kill Shivaji during the meet. Afzal Khan, as it is said, was a monster among men, standing at 7 feet tall and was strong enough to flip a raging bull without breaking sweat.

Shivaji Maharaj, on receiving the invitation of the peace proposition, went ahead to meet Afzal Khan with 2 of his trusted generals. As they met, Afzal Khan tried to kill Shivaji Maharaj by squeezing his neck. However, Shivaji Maharaj, having anticipated such move, tore open Afzal Khan’s belly using the tiger claws he was wearing on his hands. Withering in pain, Afzal Khan retreated through the tent where he was decapitated by one of Shivaji’s bodyguards. The trumpet of victory of blown from the fort and hence the fort came to be known as Pratapgadh Fort.

Pratapgadh, just 15 kms from the famous hill station of Mahabaleshwar, stands tall reminiscing the valiant tales of the glorified Maratha history. Plan your next trip there and be amazed by living the part of the history.

‘Gadh’, literally meaning stronghold, have been an integral part of the erstwhile kings and princes in India. Strategically located across various parts of the country, these forts were the arsenal of rulers to deploy the forces when under attack. Maharashtra has over 300 such forts that played an important role during Chhatrapati Shivaji Maharaj’s reign. However, one fort holds a special place in the history of Maratha Empire owing to its architectural genius and the folklore attached to it. Here’s the account to genius and valour of Pratapgadh Fort.

Unlike other forts of Maharashtra that were majorly captured, Pratapgadh Fort was constructed by Shivaji Maharaj under the architectural guidance of Moropant Trimbak Pingle. The fort consists of 4 watchtowers in four directions, armoury, king’s quarters, army quarter, around 450 steps connecting all of these, and all this was constructed within a span of 2 years. Just imagine, around 500 years ago, without the use of heavy machinery and equipments, in a hostile environment, clandestinely stands a strong hold of Maratha bastion.

The intriguing part of the construction was that the main door of the gate is not visible from outside. As seen in the photos, an outside glance makes it look like an impregnable wall. But actually the main gate is hidden behind the rocks, with a series of curved staircase leading to the door. The curved staircase was an example of an ingenious construction which protected the fort gate from being taken down by the enemy forces. 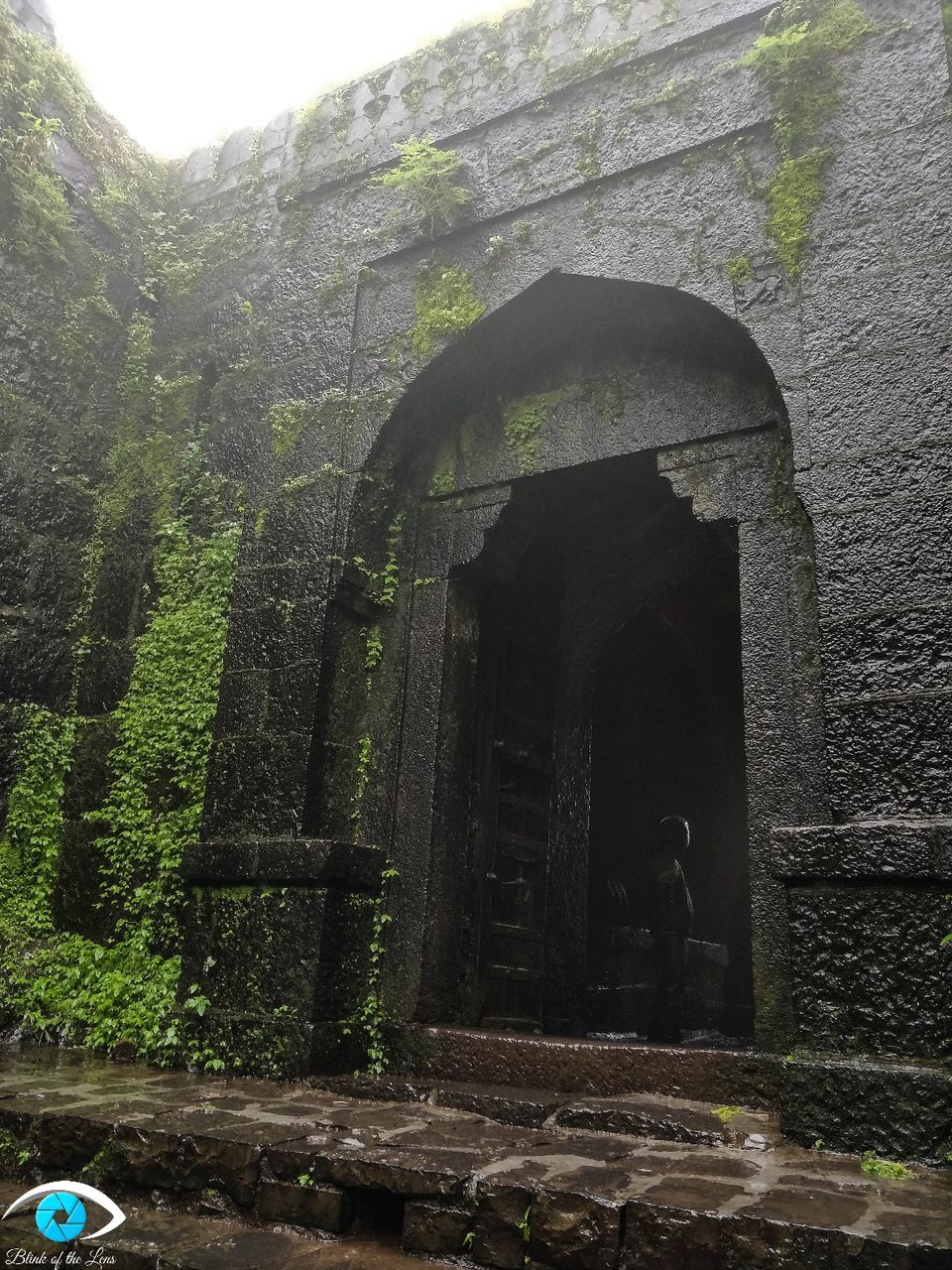 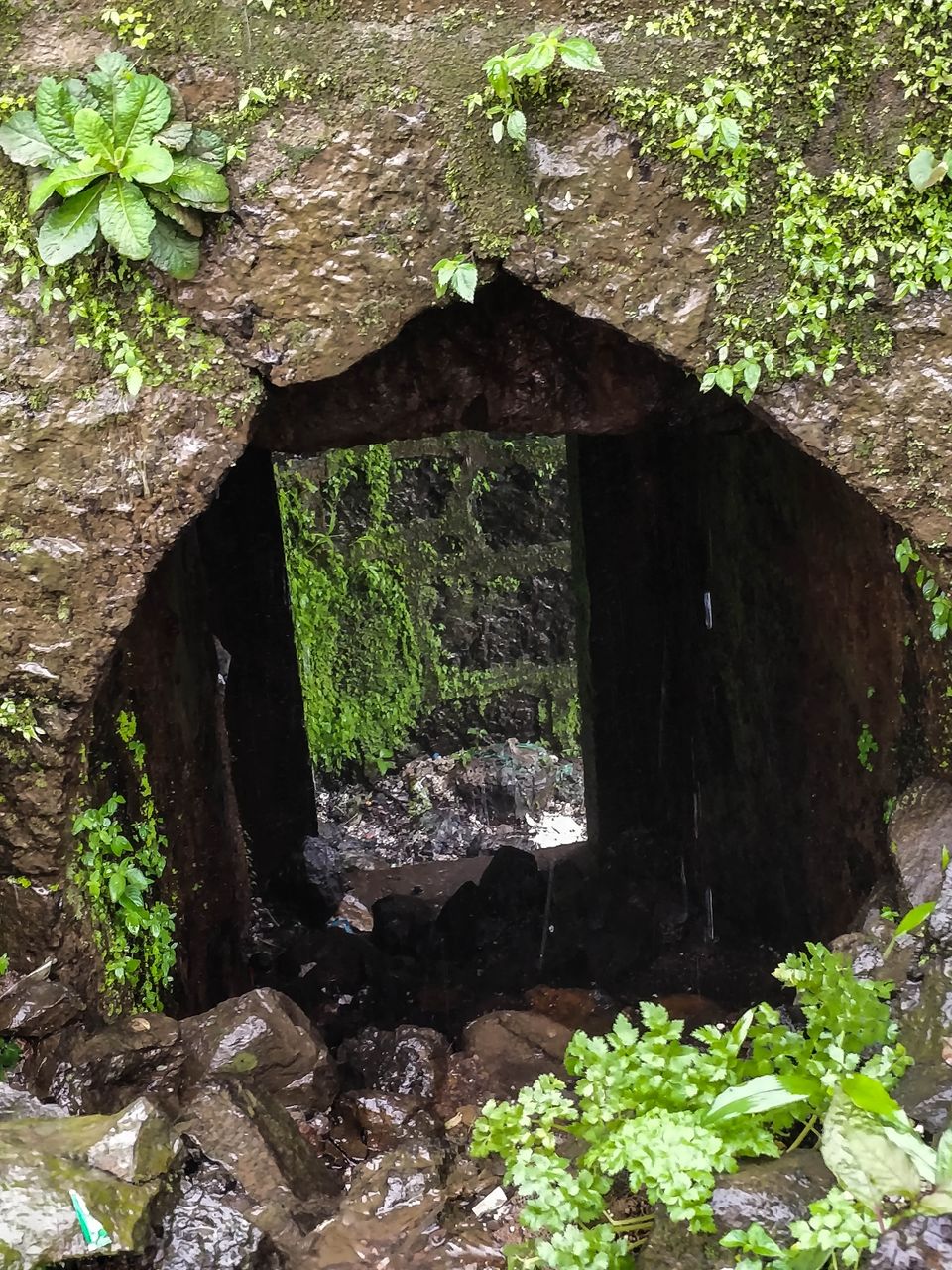 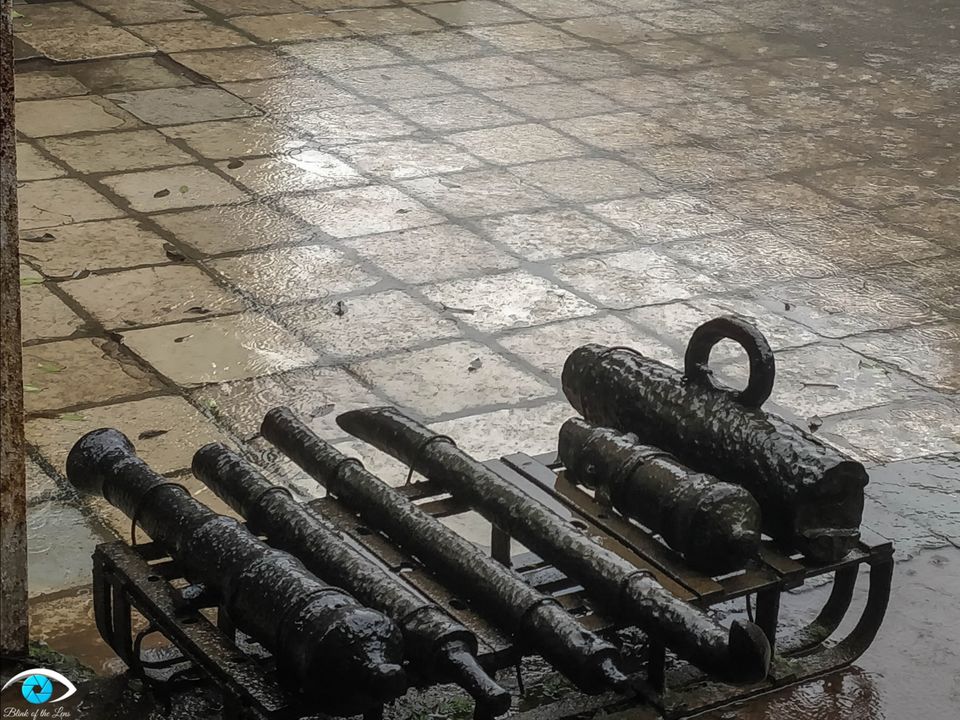 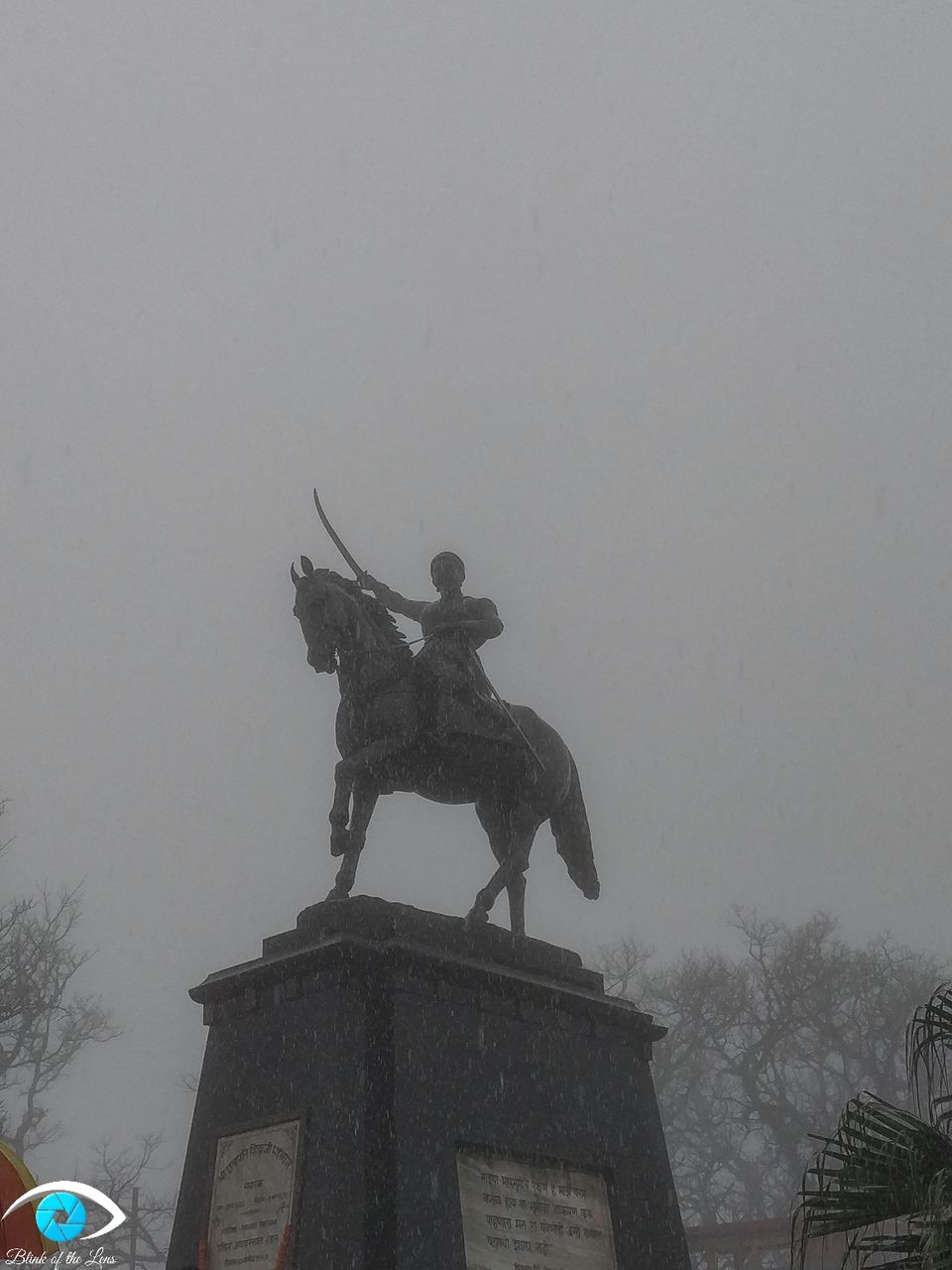 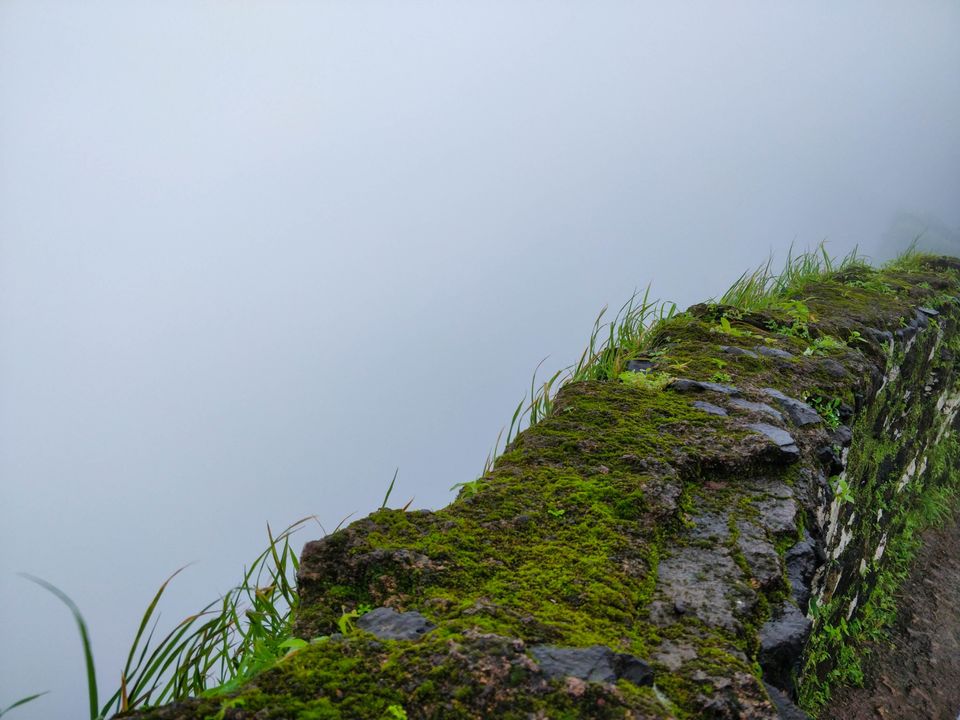 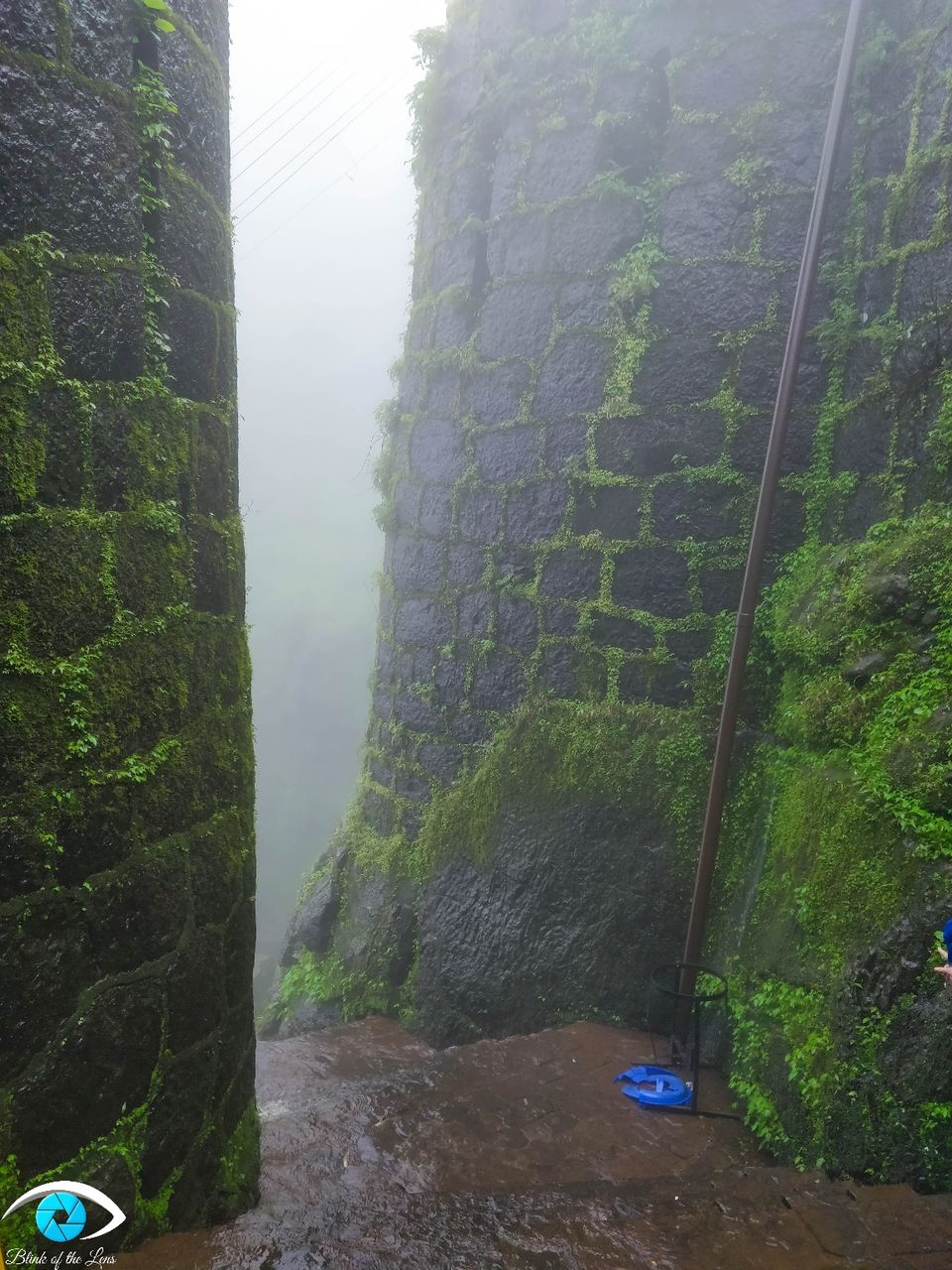 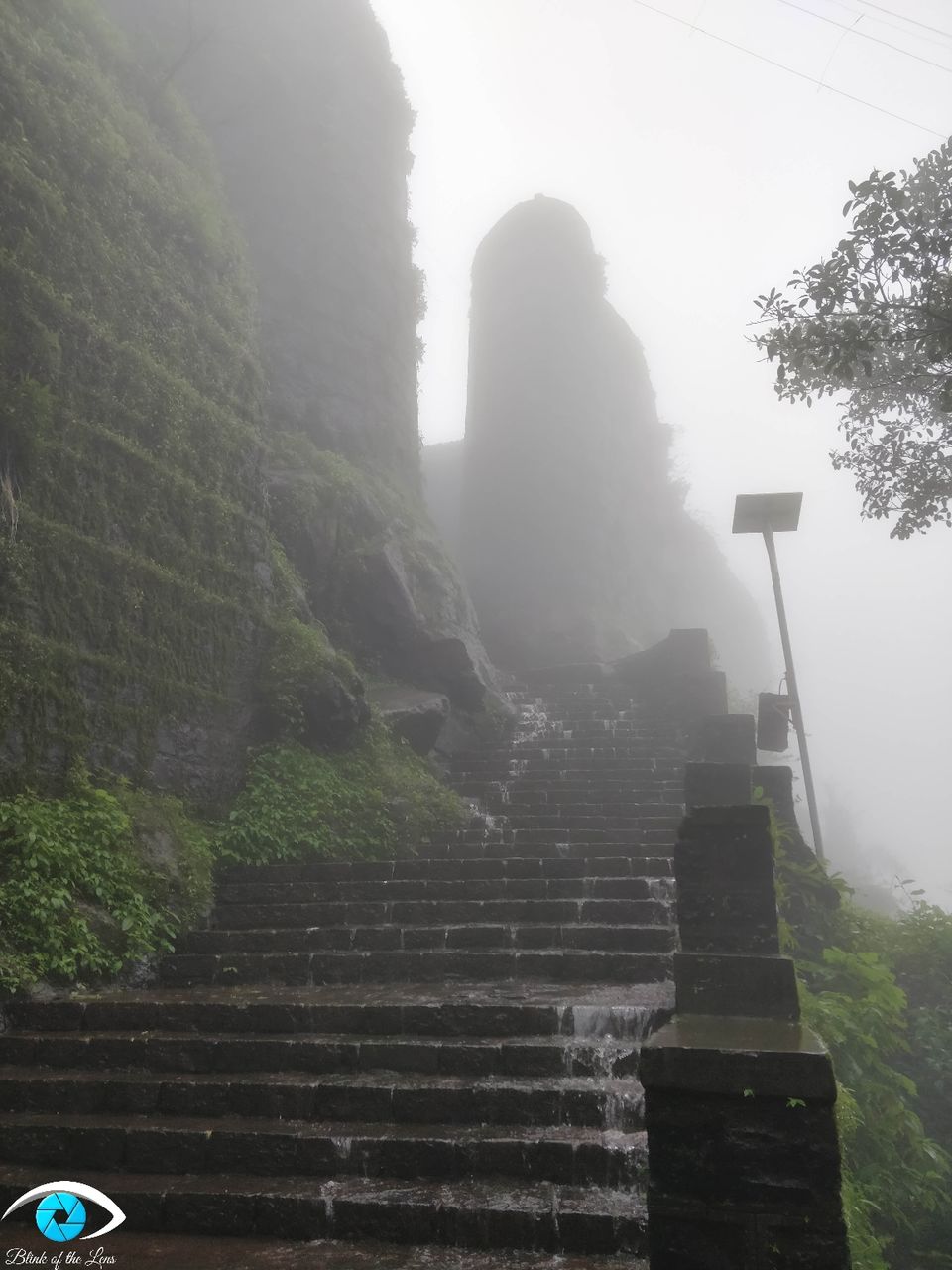