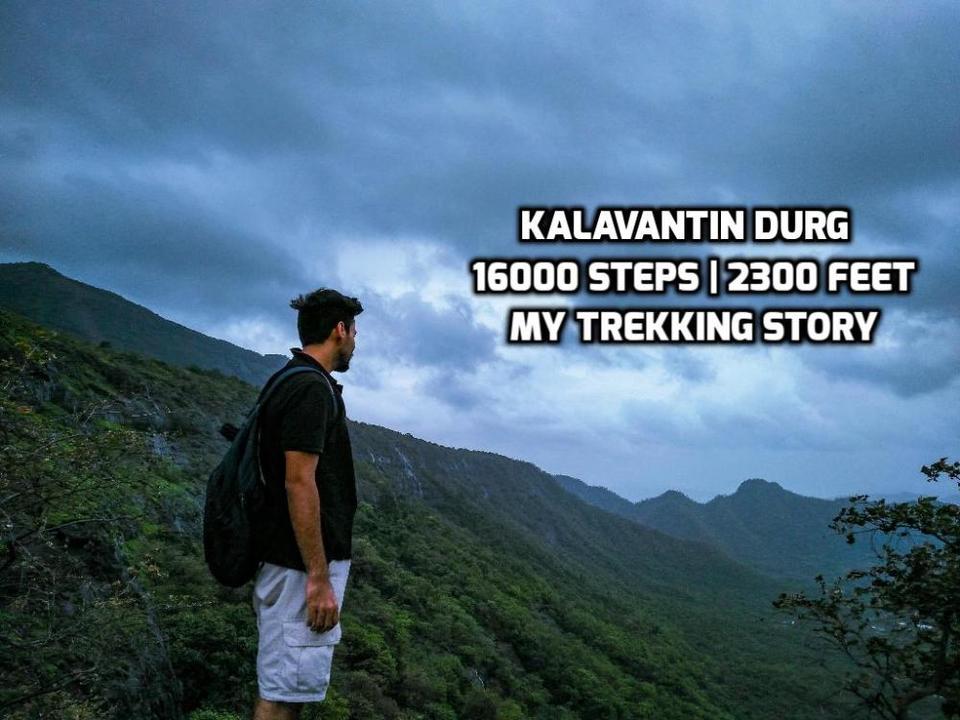 Curiosity can lead us to do many things, it can make you wander endlessly. Take you to places you might have never seen. Given you some scars and experiences that are worth a lifetime or maybe more. So did I, ask such questions, questions that made me uncomfortable, yet exciting. I asked myself how it would be to scale the pinnacle of a mountain on an unplanned early morning. God has been kind to me and good things do happen when you think more about it - Law of Attraction. It had been more than a year since my last trek. I remember scaling Lohagad during engineering after which I was into running marathons intermittently. I hardly felt my legs getting an extra stretch climbing the terrains, hardly any scab resembling a wound. My legs had given up stretching and running. All credits to my procrastinating nature and laziness added a few pounds of flesh to my body.

A few days later, I had seen my camaraderie Amit Azad exploring the wilderness and uploading beautiful pictures on social media. The pictures were amazing and I was eager to be a part of the adventure group he was a part of RACE - Rockface Adventure Camping and Expeditions, jointly founded by Anant Chouksey, Shalini Sharma - engineers fueled enthusiasts in exploring nature in its sheer form. I was opportune to be a part of a trekking experience to Kalavantin Durg. Their pictures made me nervous, made me tremble not in fear but in sheer of the adventure that laid ahead of the expedition.

The experience cited below is a part of the trek.

A night before the trek, I was picturing the terrains of the rocky mountains. Trying to visualize the circuitous mountains, mentally preparing myself to be a part of a situation. My mind generally does this - the cerebrum stimulates senses of terrifying situations and allowing my brain to find a way out of a dire. I coerced myself to sleep thinking I would be tired throughout the following day.

Finally, the day arrived when we set out on a journey, a journey that called in for an untold story. We packed our rugged bags - bags that once bore the load of books, now carried some food, medical kit, and water bottles - a bag filled with memories of pain, surprise with every adventure. We wore our robust shoes that scrunched every stone on each step of our adventure. Wore our coats, cleared our throats, wished ourselves luck for a safer journey to meet on the watchtower of the Sahyadri ranges at a height of 2330 feet.

Before the start of the trek, RACE introduced themselves and wanted to introduce others as well. So we played an interesting game where we had to tell our names and had to recall the name of other RACERS of the group. This way we could remember the new faces and their names. It was a fun way to start our adventure. Everyone briefed their journey as to how they utilized their weekends for hiking or trekking, the number of adventure treks they had completed. After this short name game, we scooted over taking steps towards the humongous mountain.

We were climbing almost 300 feet and we could hardly find a droplet of rain slipping through the clouds in August. The clouds remained dry and the humidity of the atmosphere increased. We were 18 RACERs in all, trudging our way to reach a plateau. At certain places on the way ahead, Anant and Shalini had traced a few rustic paths that seemed to be the shortest and went uphill instead of taking the winding road to cut some distance. We scaled that trail with some extra push and pull of the calf muscles. The stretch looked like hiking through a forest of deciduous trees hardly any light to the roots. I wondered how the trees grew to such enormous heights. We had to tread past bushes and trees whose branches nearly surrounded us from all sides. Meticulously taking our wee steps and looking around for Viper snakes, we had our senses turned on to its optimum for unwelcome guests. With every step our throats became sore and water was what we settled for. The painful steps led to the plateau from where we could see the mountain top close by. Our journey passed through food stations that were set up at regular intervals providing the simplest yet the tastiest and ravenous food that satiated our hunger.

As we climbed higher and higher, one step at a time, the air above became thinner and thinner. Our lungs grew weak. We looked above to find out the estimated climb, but with some rocks and trees, we hardly could view the pinnacle. We had to reach the next milestone from where we could estimate the distance. We slipped, we bruised, but we dusted ourselves and took the next step. We were relentless. We were confused on how to scale some stretches, but Anant and Shalini had held our backs, guiding every step at a time. Thankfully and some other caring folks had brought some savoring eateries that we munched on throughout the trek. Reena, a doctor, who was having her first-time trekking experience was really scared at some patches of trekking, but she garnered all her gut and courage - determined enough to complete the trek. It was amazing to see Farida steer quickly over the rocks and the way she enjoyed describing how she slipped and tripped on the slippery part of a mountain trek.

Throughout the expedition, we met faces whose faces bore the gleam of content, an achievement that incited us to push beyond our limits. We came across some humorous people, I still remember his name Shivesh who turned out to a loud and good singer. With a knack for public speaking and finding humor, he made fun of everything around him. He was the motivation behind everyone's step. At some point, he used to lay himself on the ground whereas on the other he used to run heavily to make up for the time and cover short distances. We loved his humor to the mountain top. He was right there setting up the mood. On the other end, Amit and I were busy clicking pictures wherever we could to keep some memories of nature's magnificent mountains.

Finally, we reached a point where we had to be vigilant about climbing - taking one step at a time. The rocks were slippery, we ferreted for crevices for a firm grip. We were holding our imbalanced body against the furious winds that were traveling at a speed enough to disrupt one's balance. Taking some bolster from the rock-cut for crossing a part of the mountain, we made it safely to a stretch of long steps carved to the top of the fort. Rains showed up and all we could embrace was sharp-tipped rain drops fired from different angles on our body. Strong winds accompanied the rains making it worse. Barely making it visible to take a step, we struggled.

Slowly but steadily progressing to almost 2000 feet, we crossed the lonely paths, tip-toed on the edges of deep, wide, lush valleys running alongside, we almost gasped and scurried in self-created fear. The slushy mud just scooped up and down on every step. We had to push ourselves for an extra effort to make it to the top. To my surprise, there were people amongst our trekking group who made it to the top of Kalavantin Durg pretty quickly. Dipti Sahani, (a travel adventure freak who calls herself a chatterbox giving no chance to the other person to speak) Nirav (the Jhadiwala - well he had a story behind his name) and Ajay, who just made it to the top and snapped some selfies on the pinnacle/"Damn how did they just do it", I wondered.

Slowly but steadily progressing to almost 2000 feet, we crossed the lonely paths, tip-toed on the edges of deep, wide, lush valleys running alongside, we almost gasped and scurried in self-created fear. The slushy mud just scooped up and down on every step. We had to push ourselves for an extra effort to make it to the top. To my surprise, there were people amongst our trekking group who made it to the top of Kalavantin Durg pretty quickly. Dipti Sahani, (a travel adventure freak who calls herself a chatterbox giving no chance to the other person to speak) Nirav (the Jhadiwala - well he had a story behind his name) and Ajay, who just made it to the top and snapped some selfies on the pinnacle

"Damn how did they just do it", I wondered.

The landscape's beauty that you would envision on the top of Kalavantin Durg will be spellbound. My words won't do justice if I try to pen it down. The trials and tries that you take to reach Kalavantin Durg are worth the pain. The calories that you will burn and the hunger will all be worth what you witness 2300 feet above sea level. You could see the unending ranges of the Sahyadris. It seemed as if Mother Earth cuddled the ranges with her beautiful green meadows.

Entangling your wandering souls into the beauty, makes you feel a myriad of emotions that you have never felt before. You will be speechless for a while, enjoying the zephyrs of happiness tickling your bodies making you feel different and yearning for more. Eleutheromania - Yes that's what we felt. An intense and irresistible desire of freedom - away from the regular desk work, the cramped train journeys, miles away from the clamoring traffic. That is what you will experience. Stirring down the emotions with words that I could hardly spell, we looked down to where we started and where we stand now - On the pinnacle of Kalavantin Durg.

And to speak of RACE - I would thank them for life to take me on this wonderful journey. Not only did I conquer Kalavantin Durg, but I also made new camaraderies who shared a similar hobby or a passion apart from their regular work. I also learnt that even if you are huge and lethargic, all you need is the feeling of passion and the push from your friends to achieve it and challenge the obstacle barricading between you and your destination. Shivesh - you are a star! Finally, it's not about trekking, it's about finding your real self amidst the beauty of nature and unwind yourselves. Our trekking ended with 16,000 steps and scrumptious food!

I'm really happy that the handful of people whom I met added a few pages of wisdom in my life experience book that I'll savor to read and get inspired at times whenever I feel low.

People with a wandering soul who wish to hike, rappel, climb, fall and dust themselves up, just think of RACE - Rockface Adventure Camping and Expeditions. They are the best and I feel envious when I see them exploring for a living at every breath. I look forward to being a part of their treks soon. And if you really wanna hear the Jhadiwala story, you can be a part of RACE in their upcoming trek. You can check their Facebook page here for more information

PS: I'm very sorry if I forgot some names who were a helping hand to one and throughout the trek. And I'm really glad we had this adventure together! Wish to see you soon RACERS.

Below are some pictures that we clicked! Some images are not in good resolution but I'm sure you would love to see them! 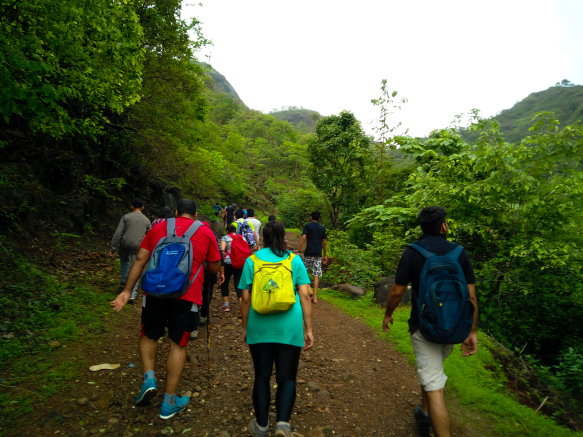 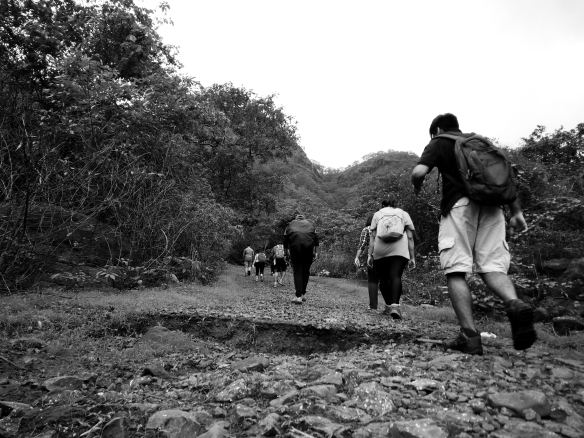 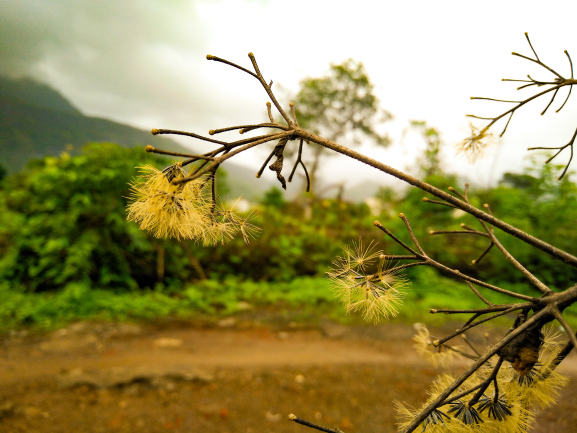 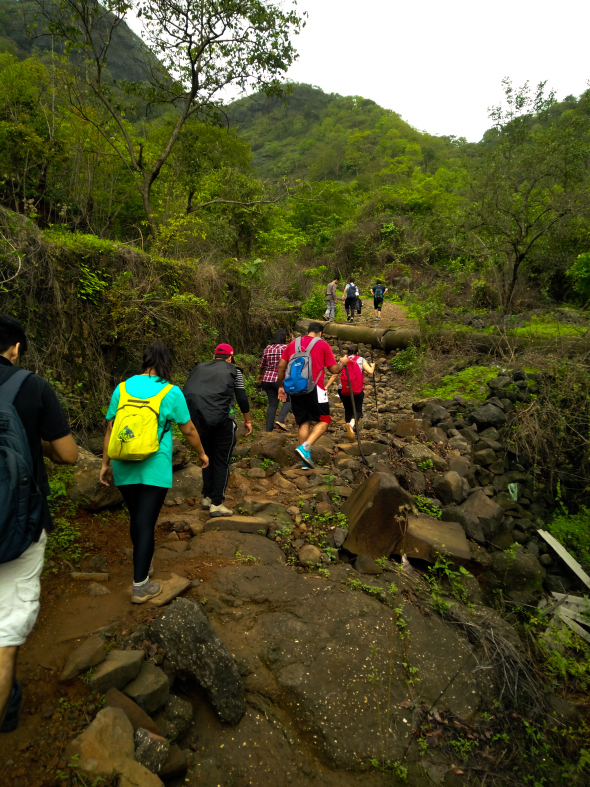 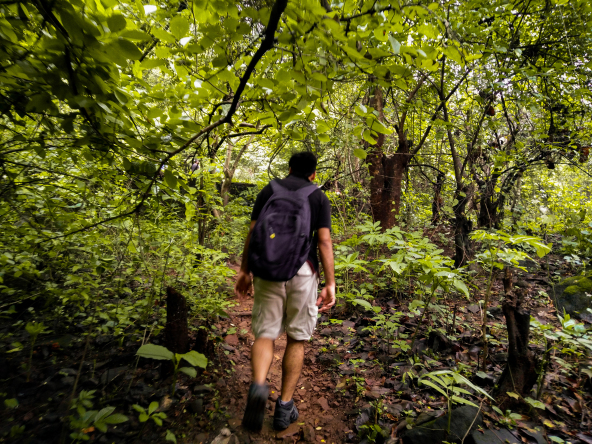 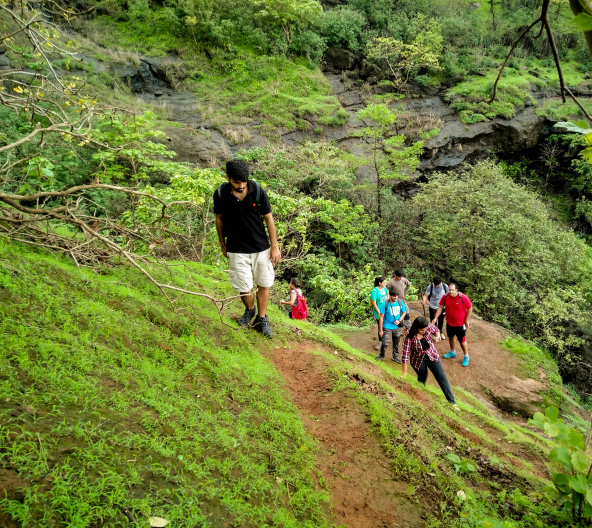 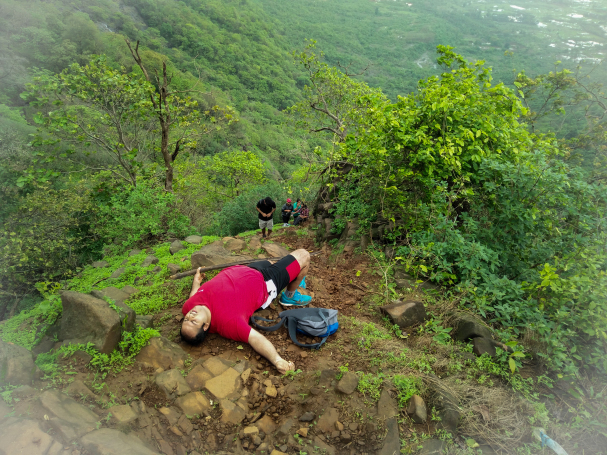 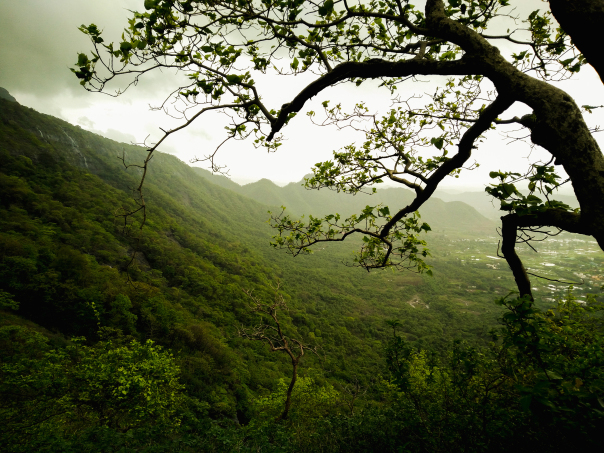 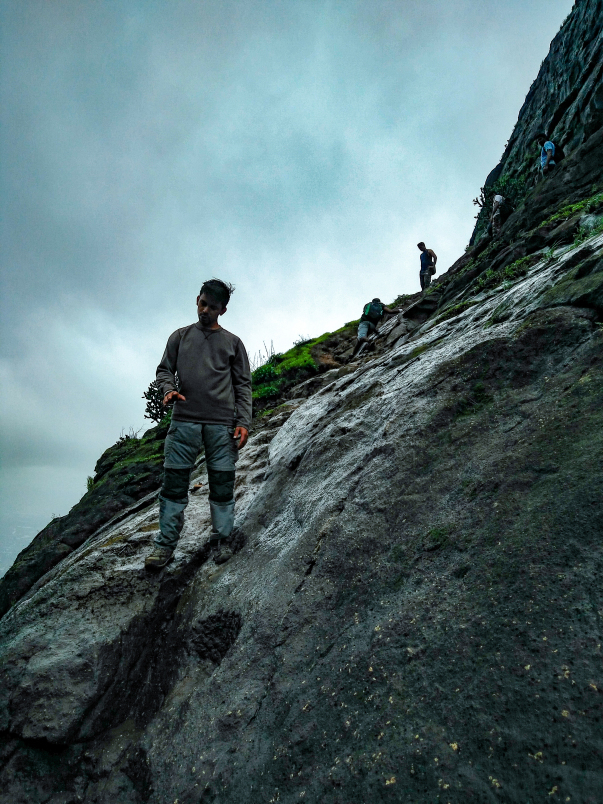 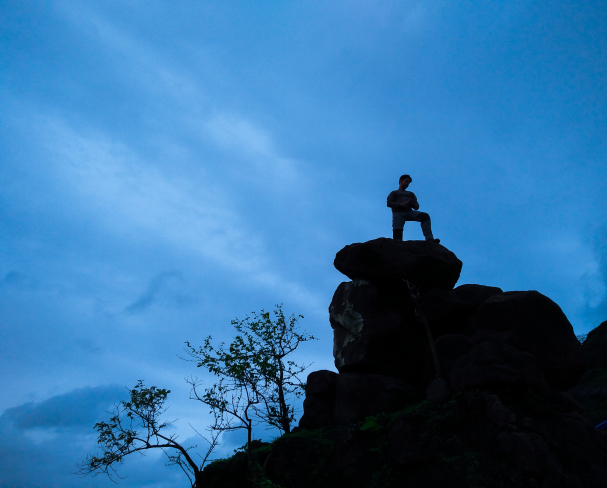 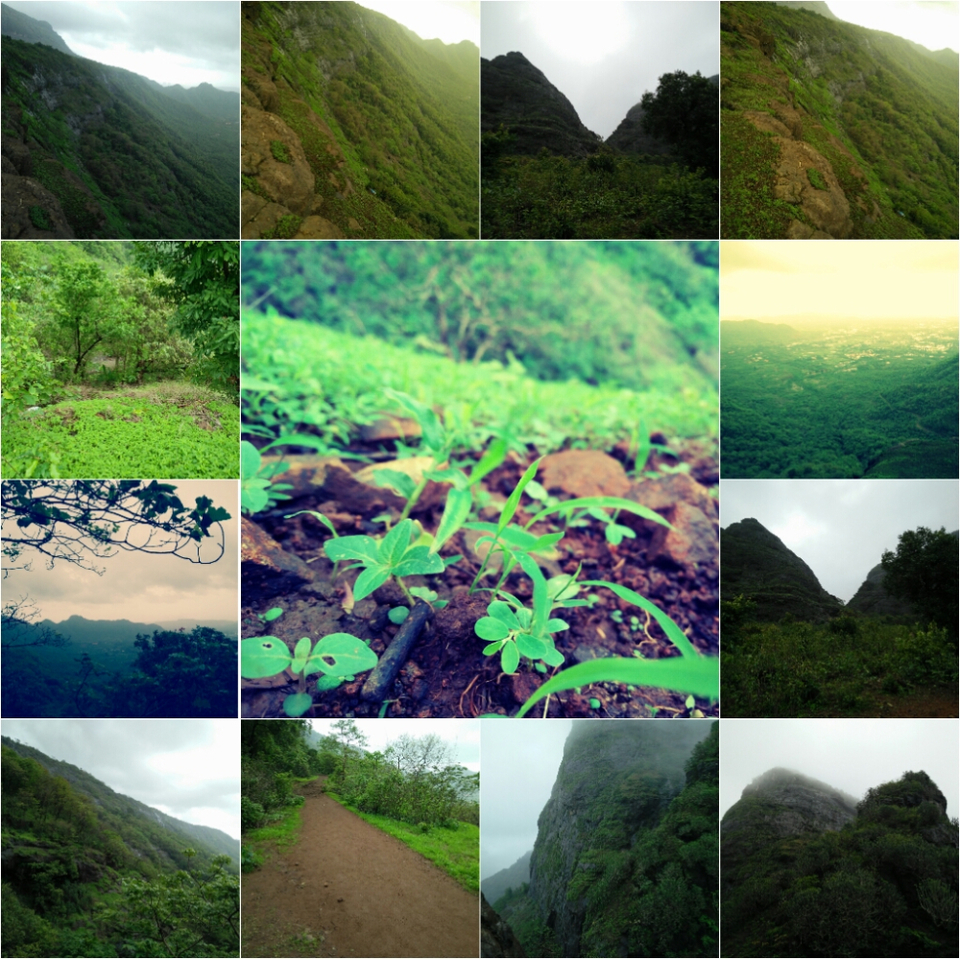 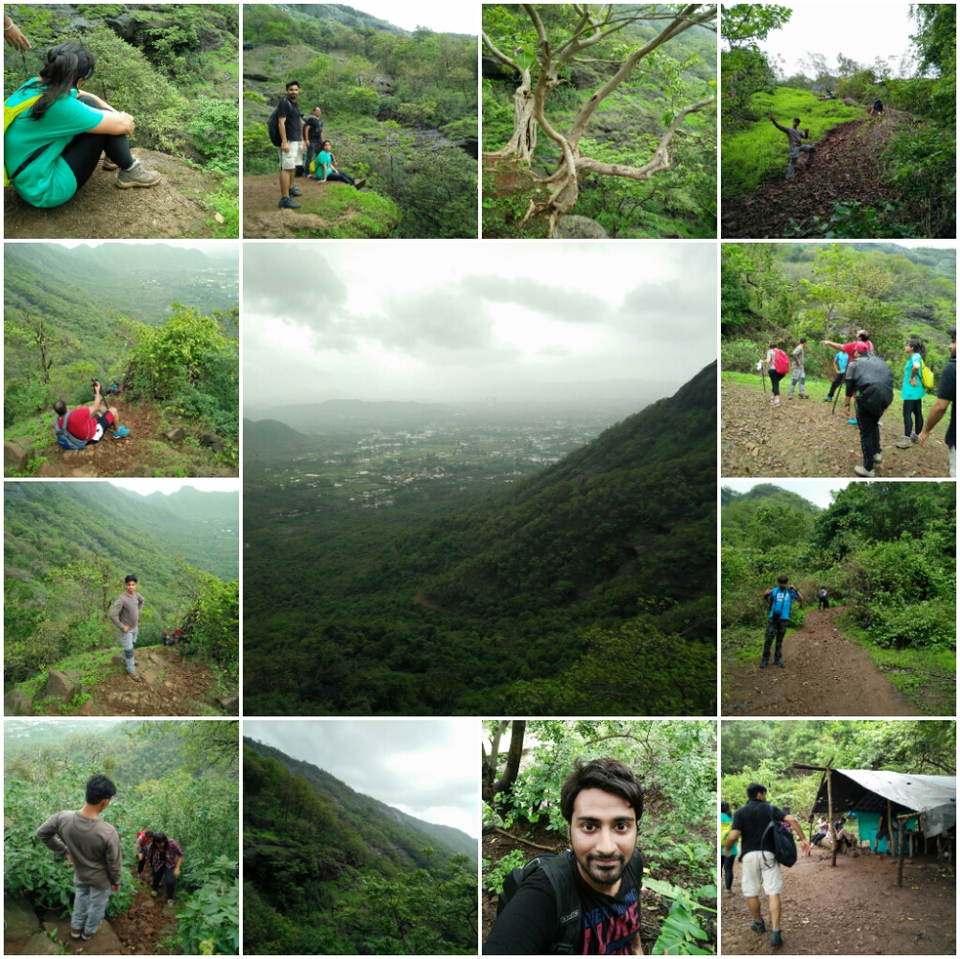 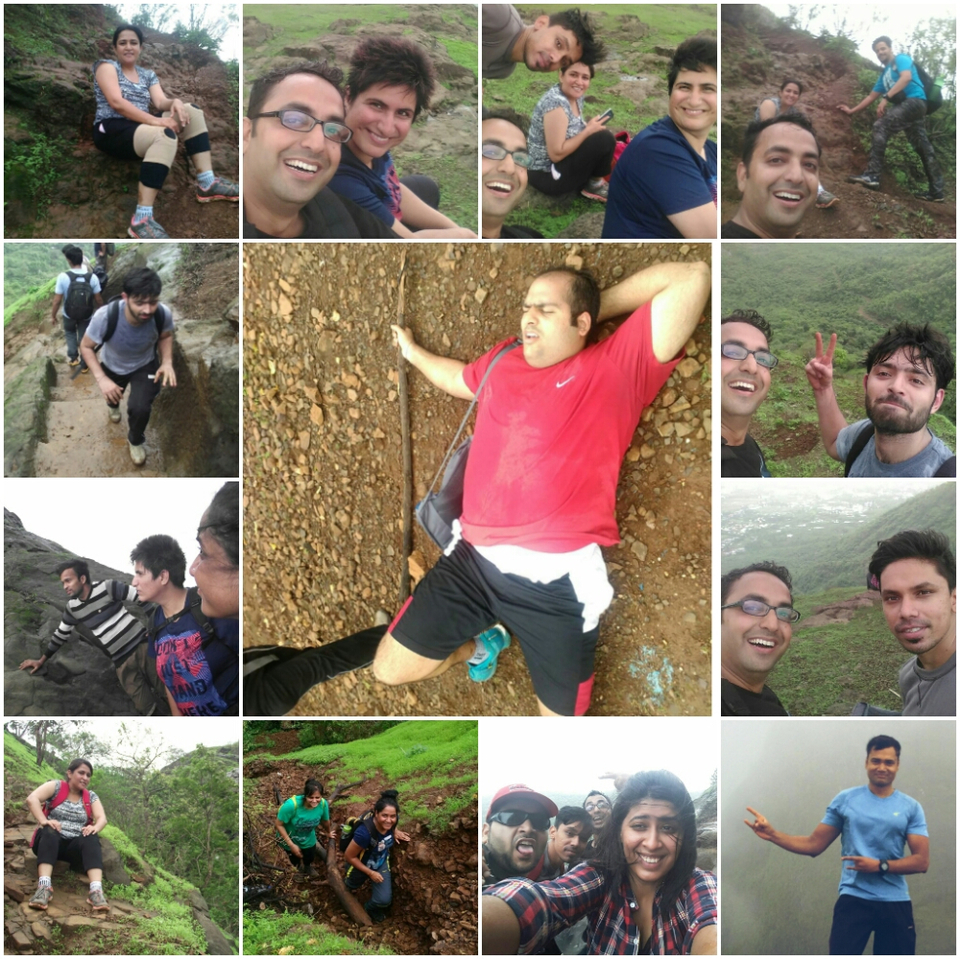 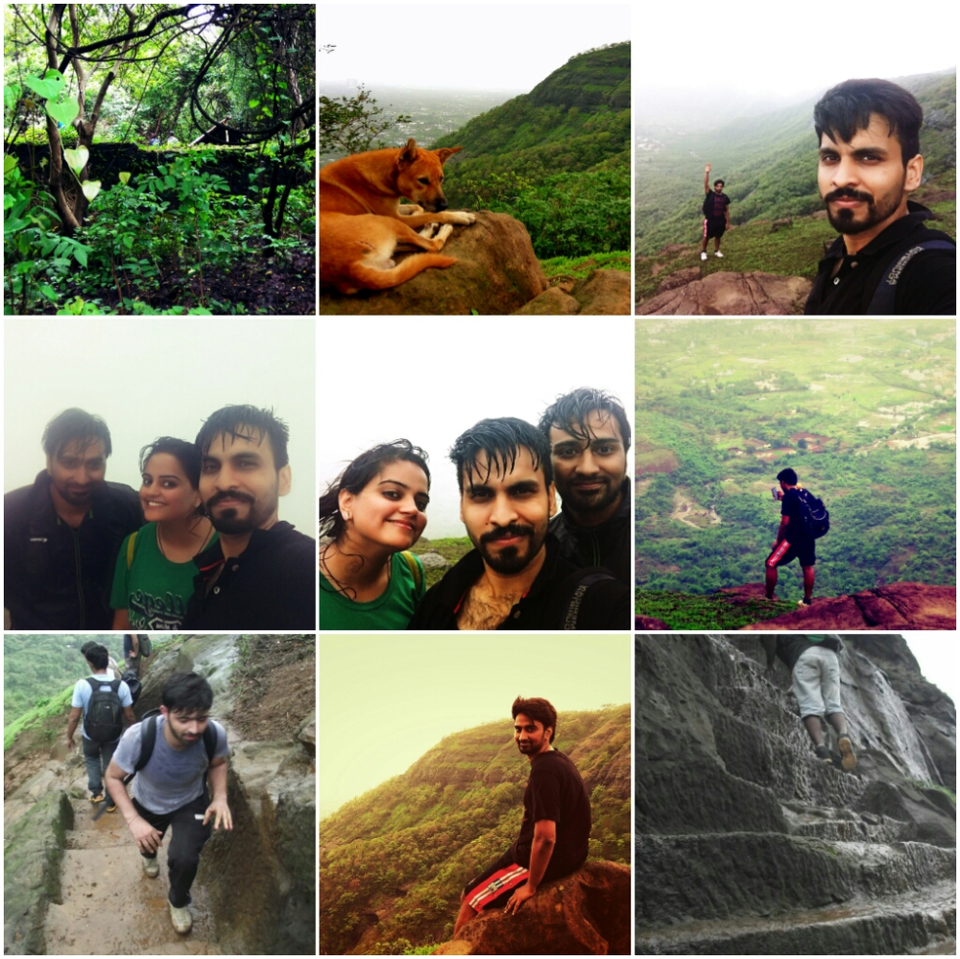 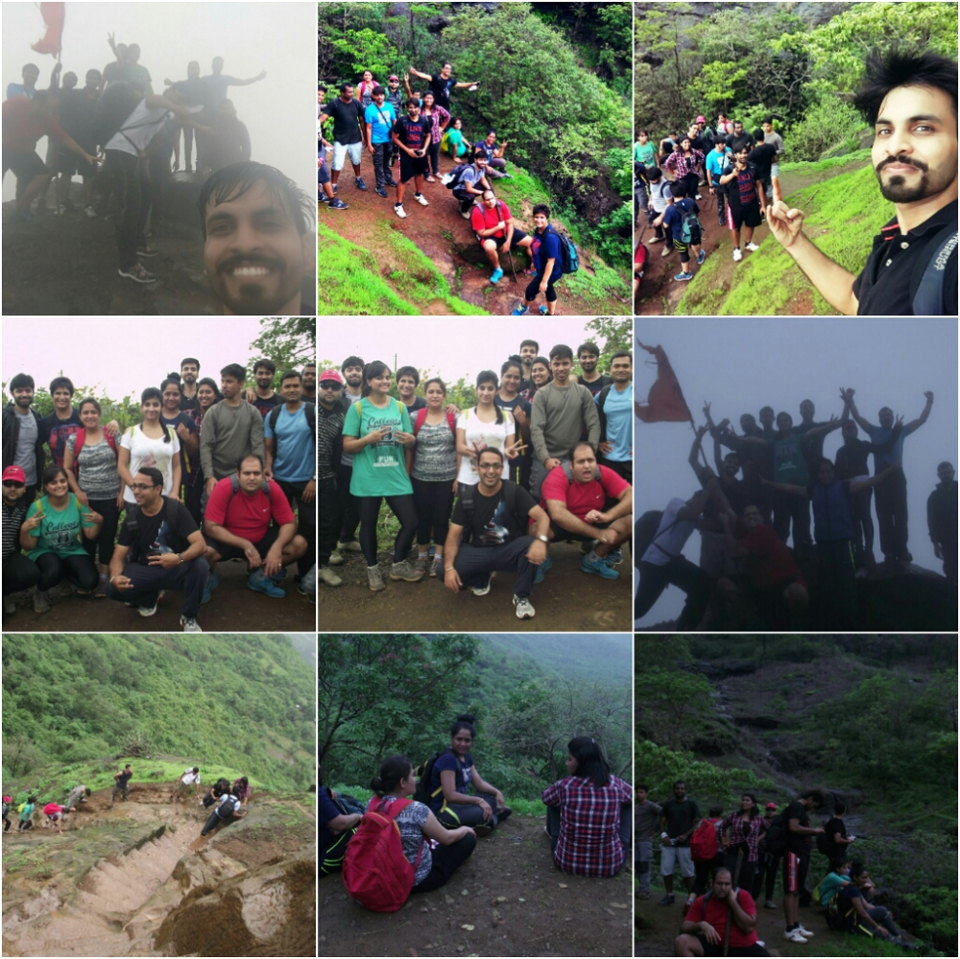 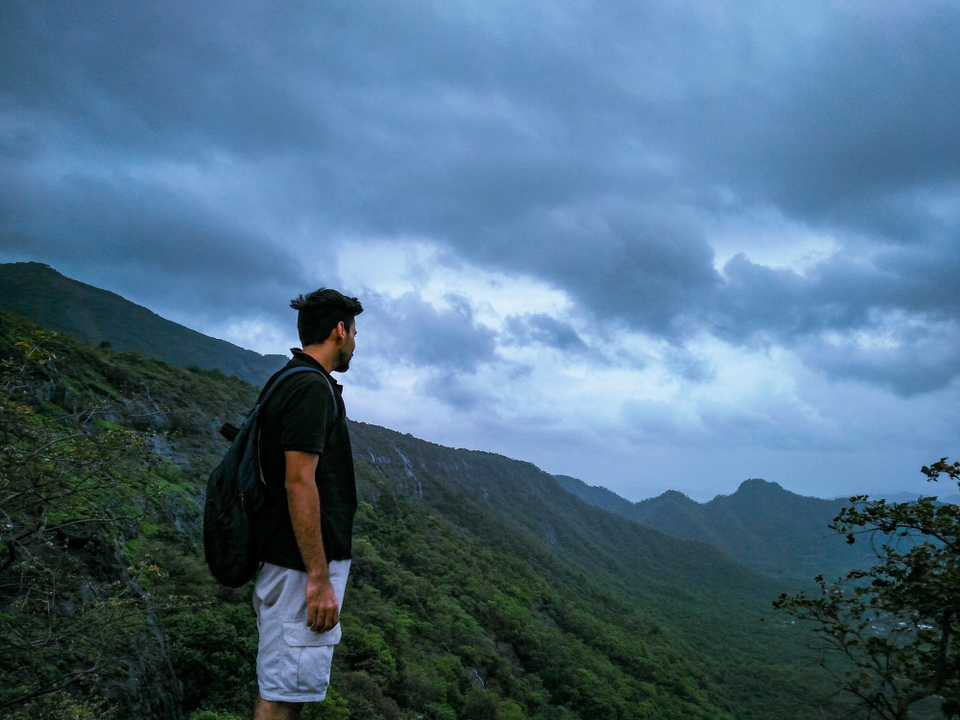 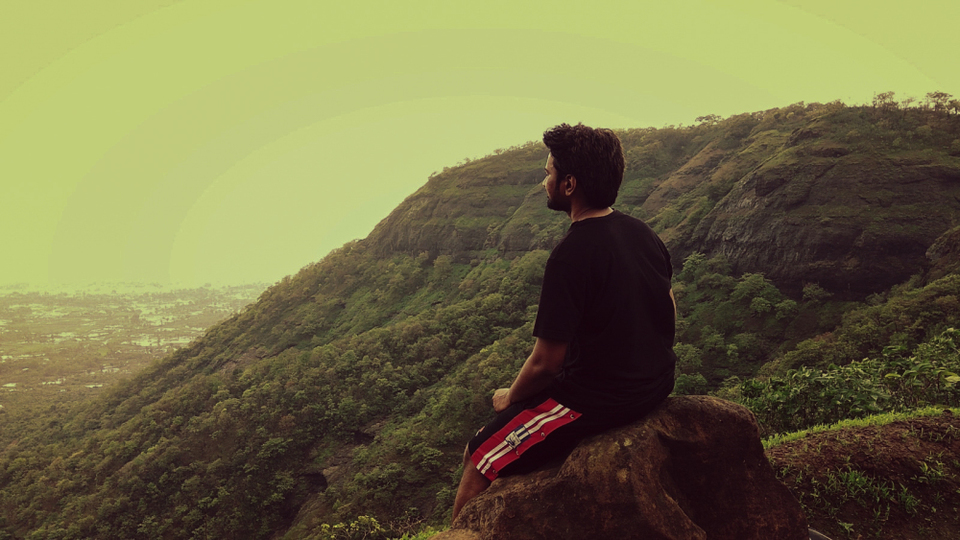 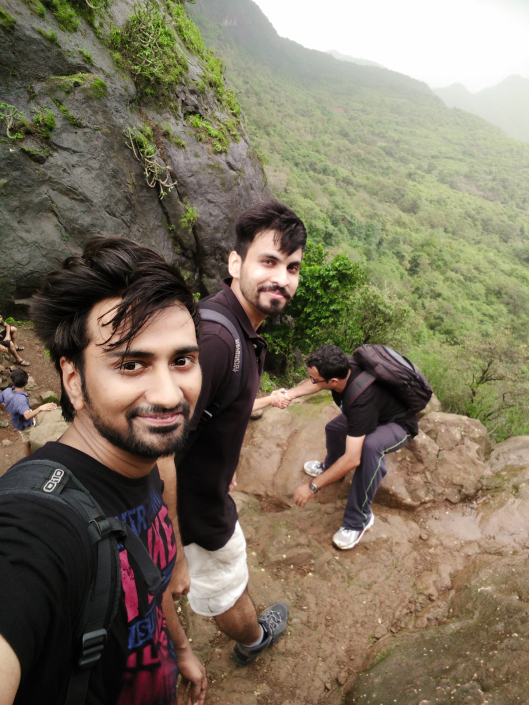 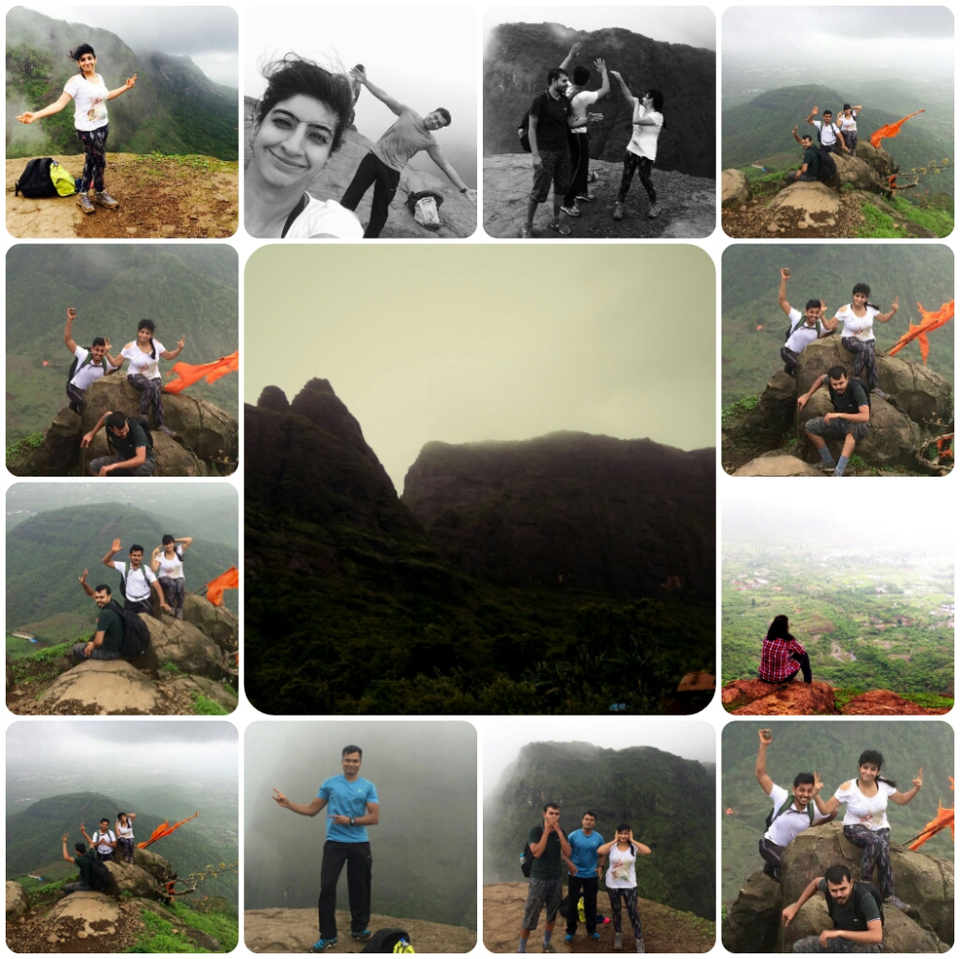