Ajanta Caves – A prelude to Second Era of Caves

By A Timeless Odyssey 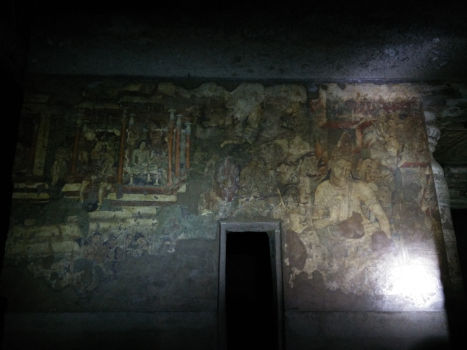 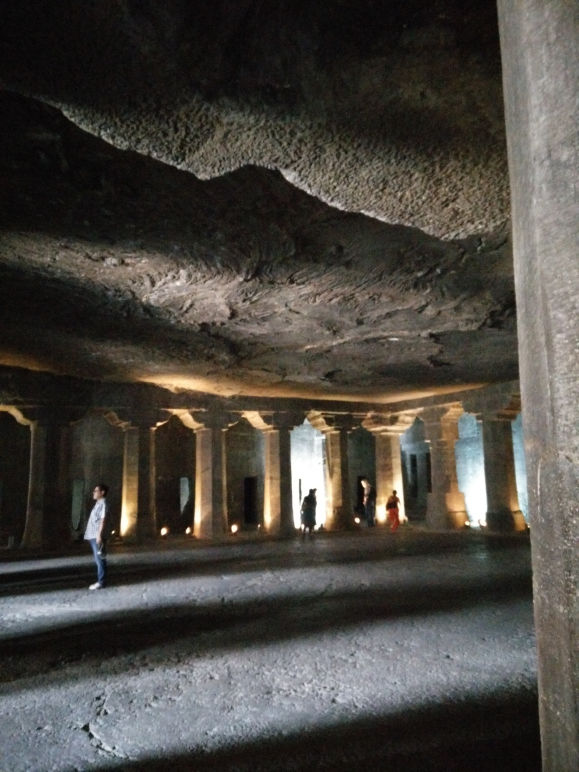 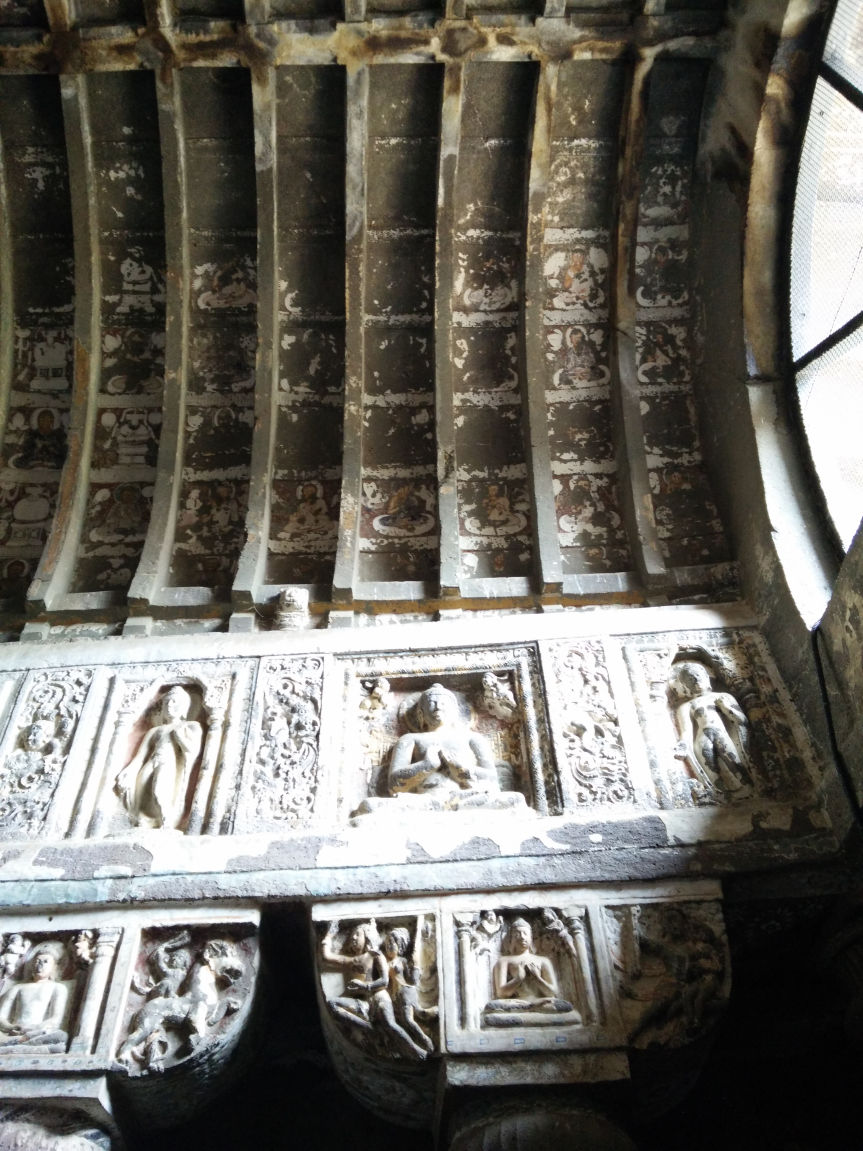 When we visited Ajanta-Ellora in January this year we were pretty much dumbstruck at the ways in which these caves were excavated. Our first post on this magnificent picture gallery spoke of the earlier Chaityas and Viharas i.e. Buddhist temples and prayer halls respectively. You could read about them here:

In this part, we look at a small refresher on the terminology and architecture of a Chaityagriha.

The architectural plan for a prayer hall usually consists of a courtyard, porch and hall inside. The interior consists of a nave separated from the aisles with a row of pillars ending with a semi-circular form at the back. Above the pillars is a triphorium, over which spring arches and the roof with cross beams running through arches. The pillars are usually decorated with motifs.

The front is entered through a door usually guarded by naga attendants (Nagarajas). The pillars are crowned with brackets of celestial nymphs and creatures riding on elegant animals. The worship in the later stages also includes music and dance, a good indication of change of times and migration to Mahayana Buddhism.

One of the most interesting points to note in the caves as we progress from the earlier caves to the later ones are the number of figures that feature in the murals. Getting to know about them would help in understanding the murals inside these caves.

In the later caves, the Buddha is accompanied by the Boddhisatavas (Buddhas in the making), most notable being Padmapani or Avalokiteshwara, Vajrapani and Maitreya (The Future Buddha). In later stages, we can see them accompanied by their consorts (Taras) which is a clear deviation from the earlier caves. The murals and paintings usually depict the Avadhanas and the Jataka tales. While a Jataka tale is concerned with the life of the Buddha and the spiritual journeys, Avadhanas are tales connected with Boddhisatavas and illustrious kings like Piyadasi. Some of the Avadhanas at Ajanta include the litany of Avalokiteshwara, Vajrapani, life of Simhala and even the story of Purna (seafarer from the port of Shupraka or modern Sopara near Mumbai).

A favorite theme in the caves are that of Devas (Gods) and in the later caves we even see murals of Goddesses which is a clear sign of Tantric Buddhism. Gods in Buddhism are one of six stages of existence and in total there are seven abodes of the Devas. There are gods guarding the four cardinal directions (Lokpalas) with Shakra as their king and headed by Yama. Above all of them exist the gods of heaven where the Boddhisattavas perform the penance before descending to Earth. Indra and his white elephant, Airavata make a regular appearance in some of the caves.

Next come the demi gods which include the Apsaras & Gandharvas, Yakshas & Yakshis, Nagas and finally Shakra (King of Gods). These demi-gods were worshiped as divine beings and were believed to be protectors.

The Apsaras (celestial nymphs) are beautiful dancers who dance to the music of the Gandharvas (court musicians of Lord Indhra). Together they make up one of lowest ranking demi-gods in Buddhist mythology. Both were given the gift of flight and were known to be artisans (dancers and musicians) in the court of gods and known to disturb the penance of the monks.

In some of the caves you can notice the Nagas being the gatekeepers and also supporting Buddha’s lotus seat. The two Nagas are the royal Nanda and Upananda. There are two beautiful sculptures of the Naga king seated on a throne on the way to Cave 16 as well as Cave 19 (with his queen).

Ajanta has a place for the Yakshas and Yakshis who are the caretakers of treasures of the Earth. The most interesting are the stories of cannibal yakshis of Simhala and Hariti yakshi of Rajagriha who were ultimately tamed by the Buddha. These legends are depicted in Cave 2 where there is a separate chapel for Hariti and Panchika.

Others who feature commonly in the caves include damsels, dwarfs, siddhas and vidyadharas. The siddhas are the famous ascetics with matted hair and beards. The dwarfs are typically found on the pillars of the chaityas. Vidhyadharas with their consorts are mythical flying creatures known to possess supernatural power. The presence of women in the murals are a strong indication as how Buddhism evolved from the Theravada/Hinayana school of thought in the early stages to Mahayana Buddhism as in the second era of excavations.

This post was originally published on 'A Timeless Odyssey'.