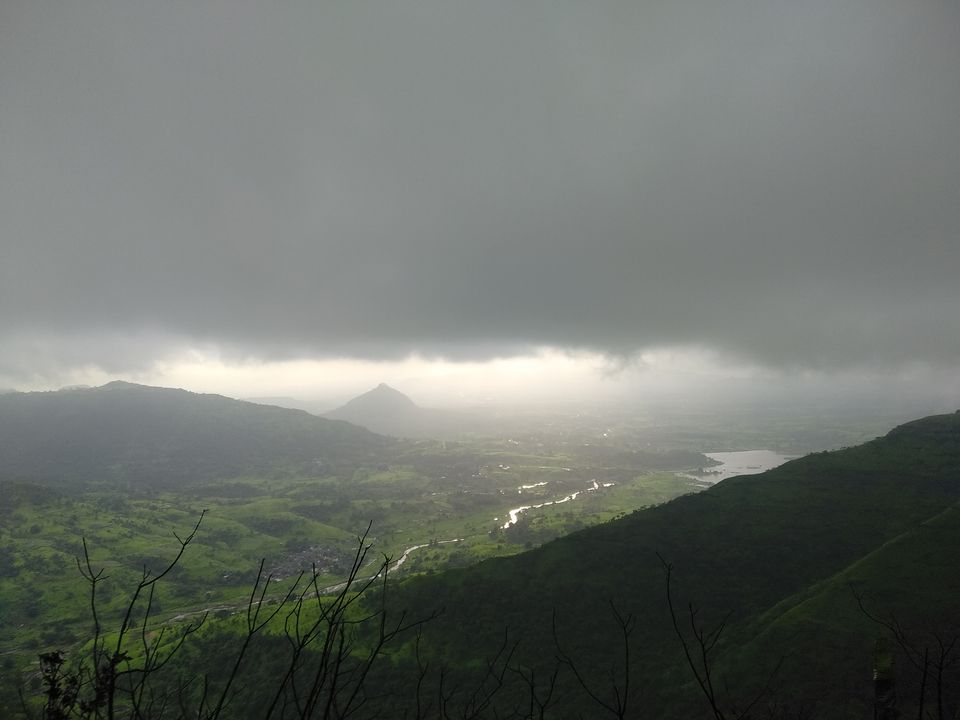 An abrupt plan of trekking came to our minds. Given the current weather and monsoons, one thing was for sure, that the Sahyadri would be carpeted with lush greenery. We stumbled upon many ideas and nearby places to trek around Mumbai. And soon found this trek called Peb Fort, Vikatgad located in Neral. Stupid of us, we did not do much research about the trek and found out it was a moderate trek. All of us were experienced trekkers and most of us, 3 out of 4 had trekked previously in the Himalayas. So this plan was on!

We went grocery shopping that night (It was the payday weekend and 1st of September) and brought in some munchies for the trek and ended up sleeping late. Almost around 2 A.M which obviously was not a good idea. The next followed by getting up late at 7 A.M instead of 6 A.M and we rushed and got ready. I managed to make some sandwiches for the trek. We made it to nearby Ghatkopar station in time for a 9.25 A.M train to Neral. We reached the base village of the trek by an auto rickshaw and started the trek by 11.20 A.M precisely. The base village near Neral that leads to the trek was a feast to our sore city eyes. It was filled with different shades of greenery, a river passing by and friendly locals.

The villagers offered us to take the local guides along, which were priced at Rs.600. However, we were not keen on getting a guide and decided to set out for an adventure. The local villagers told us about the route and informed us that the other side of the trek leads to Matheran. One hour later, sweating through the ascent, we reached a flat meadow. Plastic wrappers thrown everywhere and sudden chaos and noise, we were greeted with college students. We moved up as fast as we could and also asked them to collect the garbage, they ended messing the place. How mass tourism manages to destroy even the best of places. Moving ahead, there were groups of more such students abusing unnecessarily, screaming and just making a ruckus on the trail. We really wanted to accelerate our trekking pace and finally we were ahead of them.

It started to rain suddenly like cats and dogs and only the 2 of us had raincoats. So we put our valuables in a bag. And I was carrying the bag wearing the raincoat and felt protected. Now with the rains, we were trekking up against a stream which was slippery and muddy. A lot of times, we did not know the correct trail and ended up wasting a lot of time and energy digressing. After a point, we reached the forest. It was not so dense, however the trail started getting narrower and sounds of insects starting getting louder. There is something about the forest rhythm. It is music to the soul, surrounded by greenery on all sides and wild flowers growing there, this felt so peaceful.

We met a fellow trekker on his way back and he advised that the trek was another 2–3 hours easily and that the road ahead was slippery and difficult. We did not carry a lot of munchies and really wanted some tea. So asked him if there were any shops at the top of the peak, to which he humbly replied saying there are tons of tea shops ahead. Happily we started trekking ahead in hopes of a cup of hot chai. It was 2 P.M and we started to get really hungry. We could hear a waterfall nearby, so sat near it and ate our sandwiches. Little did we know the route ahead was going to get really tough.

Beyond the waterfall, the trek started getting steep and we were trekking towards the water stream flowing from the top. And boy, it was slippery. We reached a point, where there was a huge rock, covered with mush and that’s when we started to think if this is where we stop and go back. Fortunately, a group of trekkers (about 5 of them) were descending with a guide. They had chosen the start point from Matheran and asked us why we started the trek so late. They almost asked us to go back as it was pretty difficult ahead and the rains were just not stopping. Then one of them said we could still do it and anyways we wanted to reach the peak. So somehow we trekked over this big mushy rock without falling apart. There was no space to fall back, if one fell, they would directly hit onto the rock. It started getting even more risky as we ascended. And finally we reached the peak.

Well, we thought we reached the peak, but little did we know, this was just the beginning. The previous trekkers had informed us that there is a rope and that part was difficult. So when we reached this point (the lower peak), we could see a beautiful panorama of the entire place. We suddenly forgot everything and took plenty of pictures. Until a storm came in sight. Something that was pleasantly bright and sunny, changed into a dark clouds eloping and approaching the mountain we stood at. And the irony was that the other side of the mountain was still sunny. We decided to quickly trek ahead. The storm hit us hard and it was so windy, we almost thought we would not return back home. The 4 of us, could not stand against the wind and sat down under these big wild banana leaves which protected us from the wind and rains. We felt like pigeons that were slaves of the weather and like the ones that sat outside our windows on rainy days.

We moved up and with no human being in sight and lost our mobile phone network too, we saw the rope and boy, it was difficult to pull yourself up. The place was filled with fog and one wrong move would lead to getting your bones broken. I climbed the rope and another friend at the top pulled me. This transition was super difficult as the pass from the rope to the top was tiny and I felt as if I had passed a test of delivering babies. It was already 3.30 P.M and we were hoping to find a way out. The guide has informed us that the other way opens up to Matheran and it is pretty simple that way. It wasn't!! Now even our shoes were soaking wet and trekking was getting difficult every minute. Plus because it was monsoon, our trails were filled with dense vegetation, meaning more insects and tiny frogs. And it is funny how we even saw a few crabs up there.

Finally we saw some human beings and we were so happy. We had reached the Peb Caves and the locals set up a tea shop there. But because we were already so late, they had shut their tiny makeshift shop and were able to buy only water from them. Moving ahead, there was a way through the temple which was uphill and I was somehow very skeptical how it could lead us back to a village. We trekked and trekked, through metal stairs with tiny waterfalls right above  s, through tree roots that had to be dodged like a high jump and the same old slippery muddy rocks. Ah, we were done! Finally,the temple was here.

The view was spectacular and I am at short of words to describe the natural beauty of this place. This is one advantage of doing monsoon treks! We took a short break of 20 minutes and stuffed our faces with some baked goodies, I had baked the night before. We came across a house (this time super happy to see a human and a house in this wilderness). A lady came out and gave us the direction to reach the nearest toy train railroad that connects Neral to Matheran. She was polite and pretty old, yet her skin glowed like a child. She informed us that the temple poojari also stayed near and we passed through him on our way. He looked at the poojari aka priest. He looked like an Alfa male, with neat hair and dreadlocks at the end of the bun. With grass in one hand to feed the cows and he also gave us directions to reach the rail road.

Now the straight road has 3 directions, we obviously took the wrong one and ended up getting lost again. In all of this commotion of finding the right trail, I found some goede stones lying in plain sight. Excitedly, picked up a bunch of them. We saw a bunch of people on a trail far away and asked them for help. They explained to us the route in a distant low voice as we were far away and we ended up back at the lady’s house. This time, she gave us her no. and asked us to call her in case we get lost. Such kindness, even the guide did not ask us for a penny when he explained us the route and was courteous.

We hit the right trail and through a lot of ups and down with gorgeous landscapes in front of us. Through a trail where one could only keep 1 feet at a time over slippery rocks, we made it to the toy train rail route. Now the biggest confusion was which way? There was a board in Marathi and it only said welcome to the Neral route. We were perplexed, the rains had not stopped, it was 6 P.M and we were running out of time. There was no network connection and somehow we walked along and found some network. Called the lady and she informed to take the left route and walk till we find a road.

We walked and saw clouds move by, countless waterfalls, the green enchanting mountains surrounding us. I have trekked the mountains in the Parvati Valley in Himachal Pradesh, specially Kheerganga a couple of times and this trek felt more difficult.

We were starting to become anxious as it was 7 P.M and we did not find a road. Finally, we heard some honking, the rail road led to a road and we saw a car. That joy is explainable. For a change, we were so happy to see the cars, so happy to be back to civilization. We knew that the rail road would connect somewhere, but it was starting to get dark. Being perpetually drenched and left with no food. Plus the toy train does not function in the monsoons and there is a chance of wildlife encounters. So we had reached the highway. We happily took a taxi to Neral station. Drank a cup of chai at the station and took a train back home.

How an avid impulsive trek plan changed into an experience and a lifetime story that tested our strength. A memory which will still relish and smile at.