I have been to Charminar and its surrounding lanes many a time to click pictures, soak in the essence of Old Hyderabad, do shopping at the night market during Ramazan. But the place keeps on pulling me back to itself with the force that can rival Bermudas Triangle This weekend I was lucky enough to visit one of the holiest mosque in India the Mecca Masjid or Makkah Masjid as it’s called in Hyderabad. Just about 200 yards south of Charminar stands the grand mosque that was built by Muhammad Quli Qutub Shah the fifth Emperor of Golconda, from the Qutub Shahi dynasty.

The central arch of the mosque has bricks made from soil brought from Mecca the holiest cities in Islam, hence the name Mecca Masjid. I reached the Mecca Masjid after clicking pictures of surrounding area and was wondering if photography would be allowed or not inside the mosque.

As I was standing with my photographer friends near the magnificent gate of the mosque, a wave of faithful pushed me inside the mosque only to be stopped by the security. After a search like they do at airport they guided me to the locker room to keep my camera bag and now I was free to click pictures of the Mecca Masjid.

A few kids were running among a flock of pigeons, which were enjoying feeding on the grains being thrown by some visitors. I chatted with this old gentleman who has been coming here since his childhood to feed the pigeons. You need to climb a few stairs before you reach the courtyard with a huge tank with water to clean yourself before offering the prayers. A burqa nashin khatoon ( a lady with a hizab), floated rose flowers in the water tank and silently offered her prayers.

While clicking pictures and saw some graves in a long corridor on the left side of the mosque. A khidmatgar (one who serves god) invited me inside and enlightened me about the graves. This long corridor is the final resting place of many members of the Asaf Jahi dynasty, with a central grave of 6th Nizam Mahboob Ali Khan. It is believed that if you are ever bitten by a snake and you remember Nizam Mahboob Ali then the poison of snake will not harm you.

The Khidmatgar smeared my forehead with some ashes and blessed me with a fan made of peacock feathers. As I was about to leave another elderly Khidmatgar approached me and asked if I have been inside the mosque. On learning that I have never been inside of Mecca Masjid, he invited me inside the holy mosque and explained the history of the Mecca Masjid.

He was kind enough to offer me a cap made of straw to cover my head and gave me a guided tour of the awe-inspiring, glorious mosque. Once the tour was done he asked me to pray; now I was a little embarrassed as I have never prayed in a mosque before, but the kind gentleman showed me how to offer prayer to the almighty one.

I kneeled, on the azure carpet with golden arches, closed my eyes and bowed my head offering my prayers and requesting the almighty one for blessings. Those few moments when my eyes were closed were so soothing and peaceful that it is tough to explain in words. I checked with the gentleman if I can click some pictures of the inside of the mosque and he pointed me what all to click, the chandeliers that were packed to be opened only during the holy month of Ramazan, the clock that shows the timings to offer prayers. Once I had my fill I came out with a wonderful feeling, and still not believing that I have just had an exclusive view of the Mecca Masjid with only me, and 2 Khidmatgars and an old man reading holy Quran inside the mosque.

In my entire sojourn inside the Mecca Masjid with the khidmatgars I got separated with my shutterbug friends, and once out I saw them clicking the pictures. I checked with the old gentleman if he can show my friends also the inside of the mosque. His answer told me that I have been blessed

Here is the translation

“This is a place of worship and not a tourist place; I took you inside because you seem to be blessed one”

I thanked him once again and in my heart thanked the almighty one also for giving me a chance to visit one of the holiest mosques in India the Mecca Masjid.

How to reach Mecca Masjid: It is a walking distance and visible from Charminar, just follow this Google map

Best time to visit: The mosque is open to public from 8 am to 8 pm on all seven days, with Friday being the busiest day.

Travelers Tip: Remember what the old Khidmatgar said” It is a place of worship”, so dress appropriately, do not click pictures of people without permission, and most importantly cherish the divine experience. May almighty bless you also. 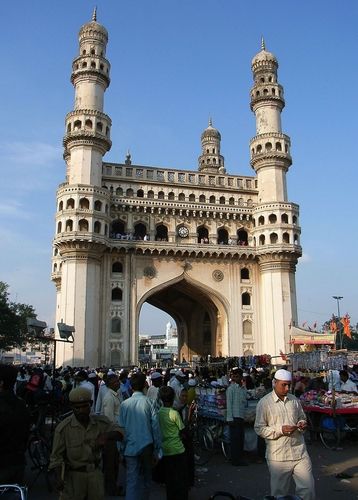 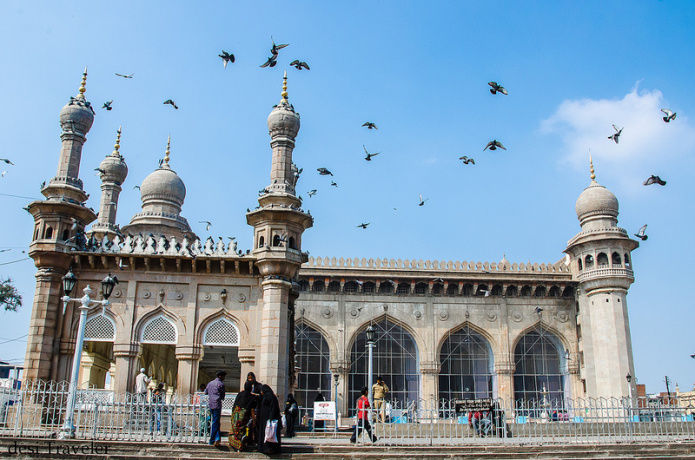