The Secreted Assets Of Mehrauli

History of a place is always as significant as its present. Despite of the rapid development rate, the inhabitants of these places tie an emotional bond with the left over patches of the ancient era.

While walking over the historical paths and trails, one can imagine the time when the same paths were treaded by the rulers and their ministers.
The time I stepped out of my house, I had in my mind the entire schedule for the day. Hence, this article can prove to be a fruitful one for you, if you want to know the “List of the places in Delhi you can explore in just one summer day!”

That specific day I focused to aim the monuments which are least recognized till today but provide a full bucket of knowledge and scenic beauty in the capital.

Wandering in the city’s hustle between the traffic horns and the people roaming around for no sure reason, it is actually tough to acquire a point, where one can smell the cool breeze of the blowing winds and have a gaze at the tree tops running till the far located city buildings.

Yes, after reaching Mehrauli, a domed monument over a well dressed hillock clutched my attention thus tempted me to have a visit.
Without making a second thought, my bike inclined over a ridgy path and ended up giving a perfect view of the monument’s entrance. With no such secured gates and entry counters, a board introduced the monument as Azim Khan’s Tomb. Brick and rubble made stairs welcomed me and took straight near the tomb. 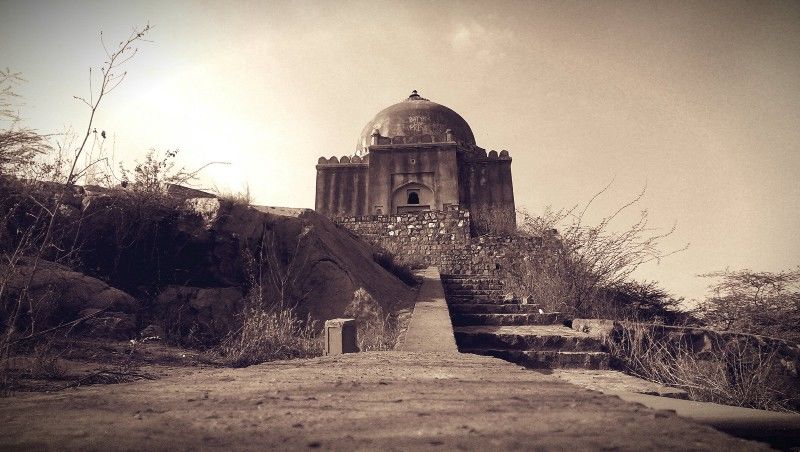 -The high rested tomb may be a sign of the ruler’s superiority during his reign.

The tomb is said to be that of Azim Khan or Akbar Khan. But it is believed that the gravestone has disappeared. However I managed to notice features of creativity like Finials on the domes and Kangura patterns at the parapet levels.
Being rested on a height, the tomb of Azim Khan serves as a beautiful viewpoint to notice the city’s visible limits.

For your information: Built during the Lodhi dynasty in the Mehrauli area of the capital, Jahaz Mahal served as a pleasure resort or Inn and gave a halt to a large number of Muslim pilgrims from Afghanistan, Arabia, Iran, Iraq, Turkey who had come to Delhi for visiting various Muslim shrines.
I reached the palace from amidst the longest market street I ever witnessed in Delhi (The Mehrauli Main Market). On approaching the palace, the vision served only one security guard as the caretaker of the dusty monument. He allowed me to stroll around within and imagine how it would have acted as a resort in its era. 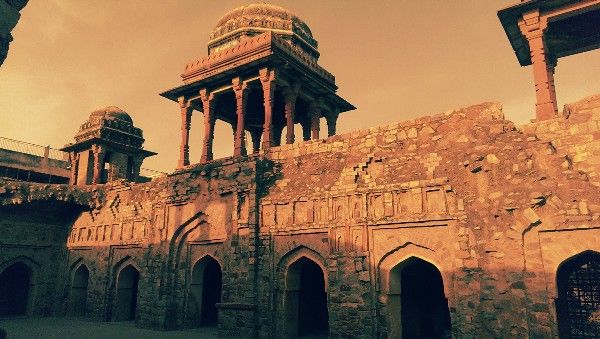 "The blue tiles on the parapet level acts as a cherry on the cake."

While entering the palace, I was quite attracted towards the welcoming blue tiles near the dome of the central gate. Well carved patches of the palace directly gives an idea of the creativity used in building the palace.

Jahaz Mahal also defines its name as it looks like a ship shaped palace, which is evident of an overall discrete beauty in the field of antique architecture. 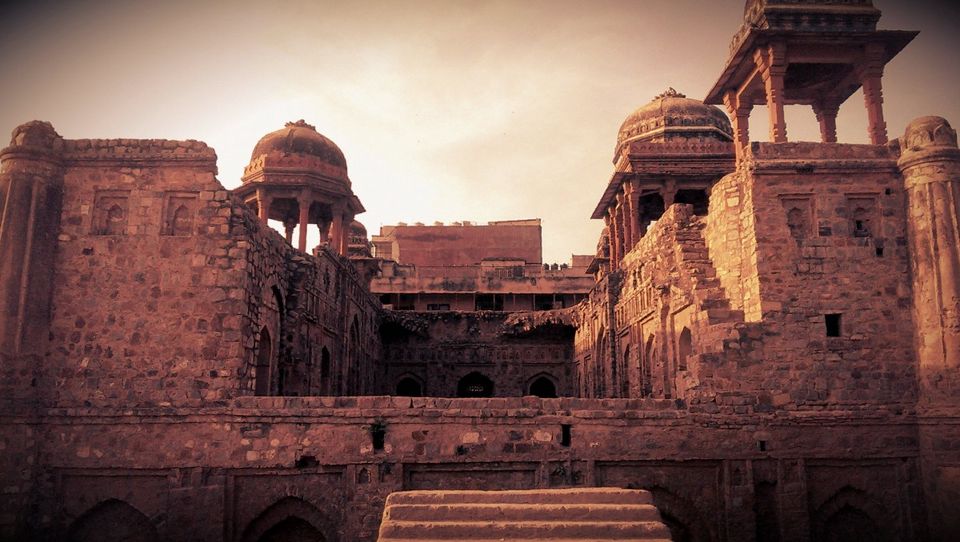 "The U shaped courtyard in the palace outlined by the spacious restrooms."

At the centre of the palace, a U-shaped courtyard pierced with a number of arches would have provided spacious rest rooms to the pilgrims, while partitioning them with a curtain would have enhanced the privacy.

Even now after acting as the venue of the annual colorful festival of the “Phool Waalon Ki Sair”, this beautiful resort of its era is getting exploited by the kicks of commercialization.

We cant restore the same importance of Jahaz Mahal but we can definitely pay a visit so that its significance survives for many more years to come and it could become a well recognized monument in the pages of history.

While wandering over the swirly roads of Mehrauli, I took a cool breath on reaching this unnoticed but beautiful monument of the old pages. Known as Madhi Masjid, this mosque is not recognized because there is no signboard or name board which could educate the passersby of its existence. Another reason being, there is no exact story-tale of its establishment. 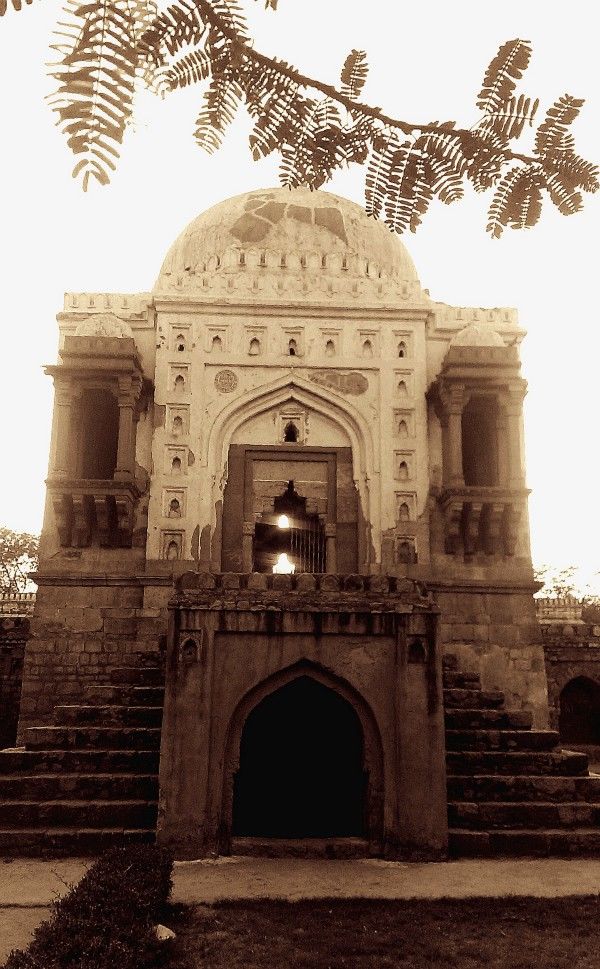 "The cage like structure pierced within the stairs reflects its role as unknown but mysterious one."

Though presently not being functional, this mosque is believed to be built during the Lodi period. Surrounded by well maintained lawns, the entrance paves the way to a three side open staircase pierced with a cage lookalike chamber in the middle.
The front face of the mosque presented itself with a cemented gateway surrounded by two windows. As I walked on further, the narrow gate on the other side opened its limits to a huge courtyard with beautiful white fortified walls running around. 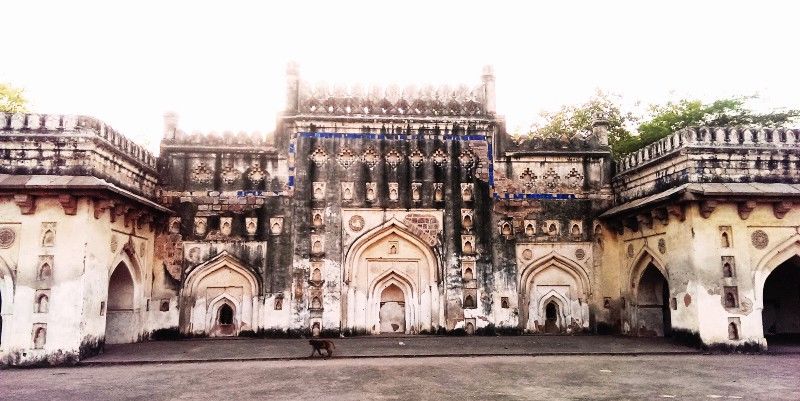 “National heritage might be a demolished grave, still a true citizen preserves it as a beloved piece” -unknown

The spacious open area was possibly used to offer prayers in the time of its function. However the blue tile outline on the rear wall reflected the mosque’s picture more like a fort. 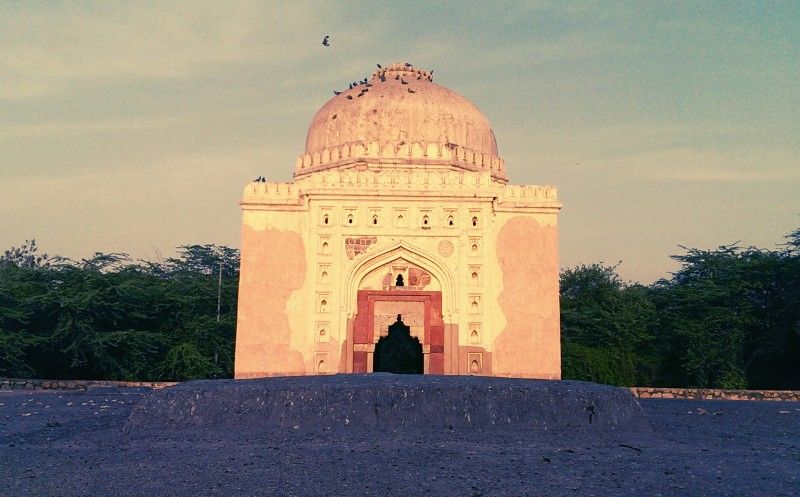 Although the guard gave a promising statement by introducing the mosque as a milestone of the event “Phool Walon Ki Sair” in October.

Despite of no tales in regards to its existence, the visit to Madhi Masjid proved to be a fruitful one as I got to experience an accidental visit to such a beautiful unit of the past. 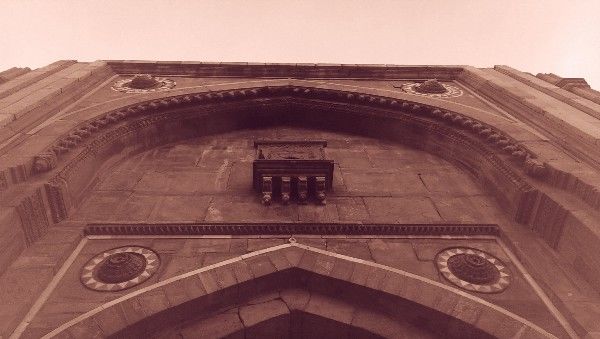 For your information: Linked with the reign of Sikandar Lodi, a saint and poet named Shaikh Fazlullah also known as Jamali was rested here. The tomb however represents two graves, the other one to believed as that of Kamali, whose identity is unknown till date. 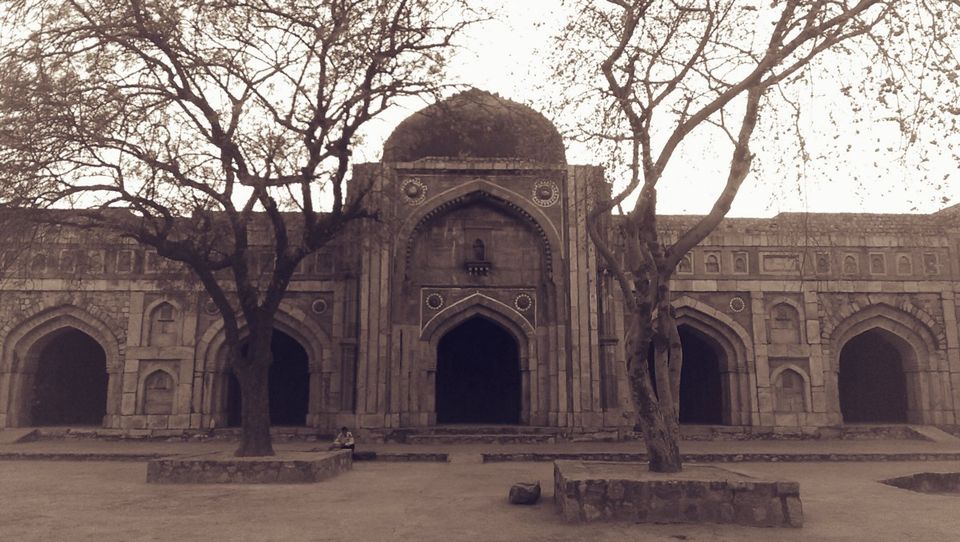 -The wide structure of the mosque hugs the complete vision of the visitors.

As I took upon the Mehrauli-Gurgaon road, clear visions of greenery all around stole my attention and a small gate onto my left lead me through a dusty trail. Surrounded by small domed structures wrapped all around with tree branches, it looked as if they were kept alienated for a very long time which resulted in their present condition.

The mosque however reflects the beauty of the architecture to an ultimate extent showing carved bands and lotus bud patterns on the parapet level. Though nonfunctional, but this mosque acts as a great source of peace and silence.
The tomb rests adjacent to the mosque within a flat roof cemented structure well decorated with coloured tiles and floral patterns running across the parapet. I did not get a chance to approach the tomb as it had specific time limitations. 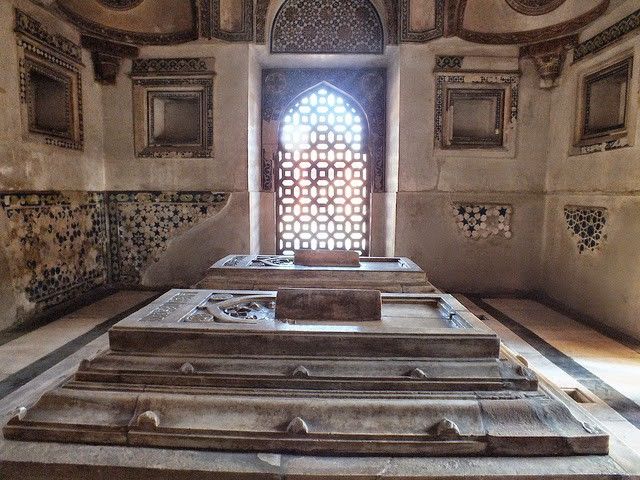 People often rumor this piece of elegance as a haunted patch of the capital but honestly I never received any such vibe in the entire stretch of my visit. 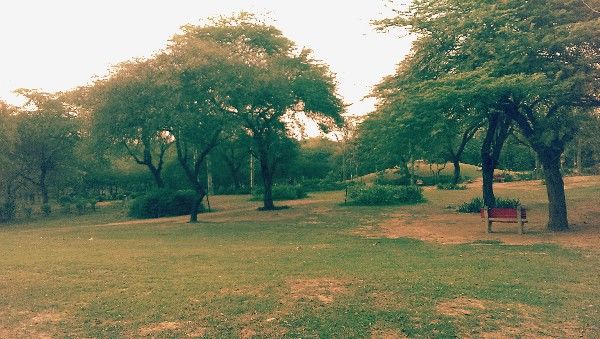 In fact your freshness gets revived when you are further welcomed by a well maintained park which can serve an ideal picnic spot for families as it lies far away from city’s hassled noise.