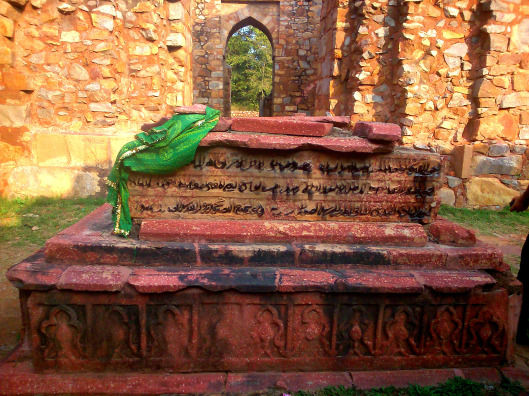 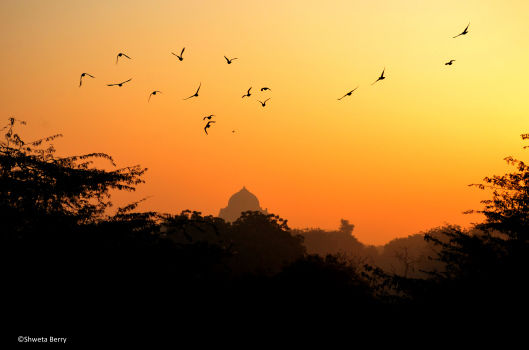 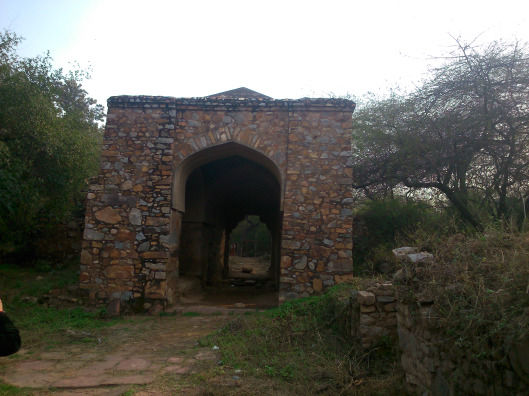 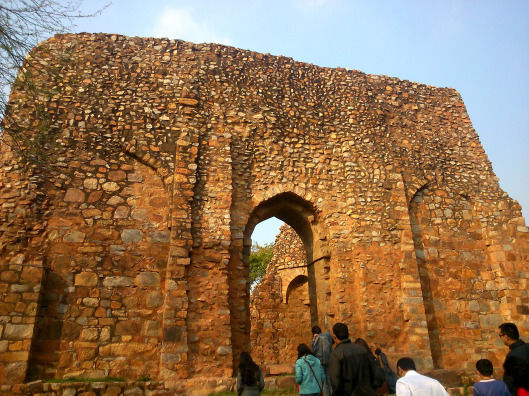 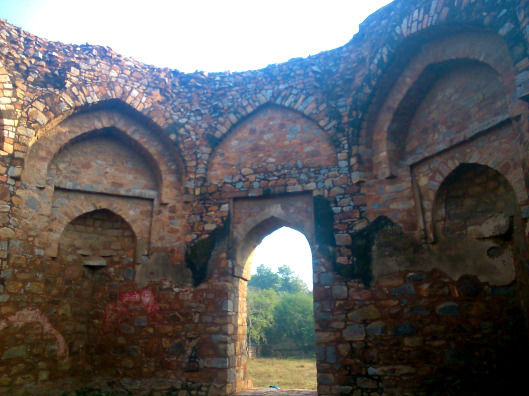 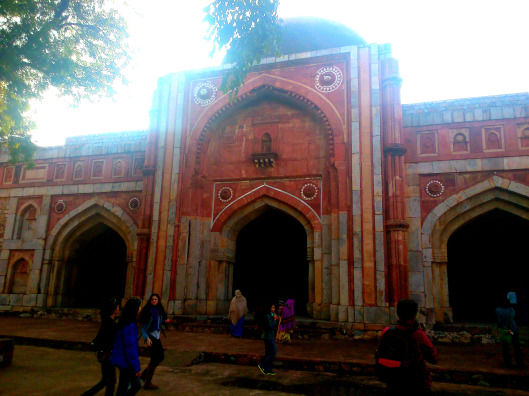 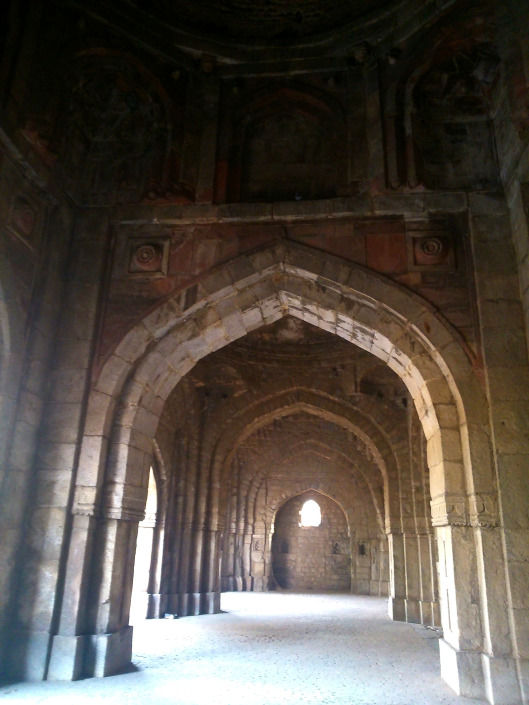 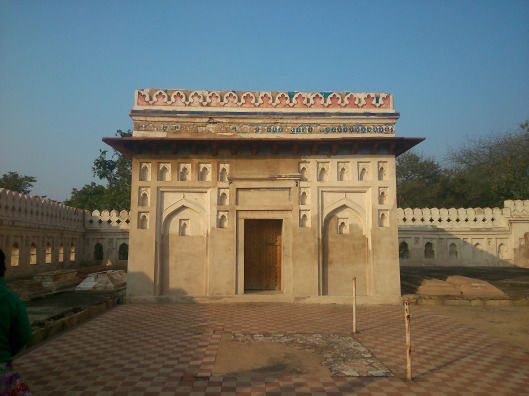 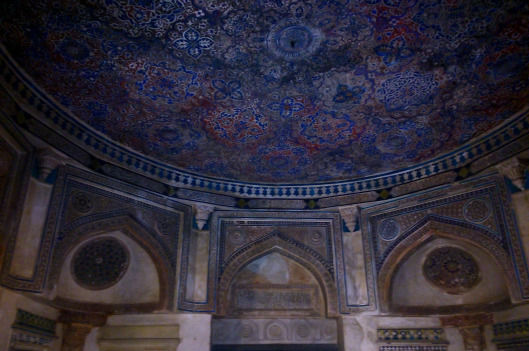 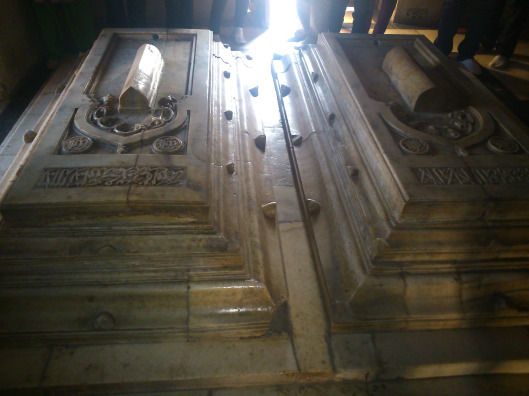 Delhi’s eternal treasure of architectural prodigy leaves me speechless every time I leave my dwelling to wander around the city. I find myself on self-declared mission of discovering the state capital beyond the realm of so called “tourist attractions/spots”. On my mission, I come across many city dwellers who share similar love and passion for exploring the city and sharing the same with others. This time I was in the expert company of Delhi Heritage Walks, a group of young history students, who helps wanderers like me to discover the unplumbed corners of the city.

My incessant urge to travel guided me to the southern part of Delhi at Mehrauli Archaeological Park. Whenever, I hear the name “Mehrauli”, a picture of giant five storied monument which also is a UNESCO heritage site i.e. Qutub Minar grabs my thoughts. But the today’s post does not pertain to this already “celebrity status” monument, rather it will focus on the coal mine of architectural bravura located just 200 m from Qutub Minar yet it remains overlooked and ignored. That’s why it is often referred to as “poor cousins of a rich monument”.

Mehrauli Archaeological Park was never originally a park. It was huge piece of land with dense vegetation in proximity to the Mehrauli village with hefty number of monuments in a ruined state and a splendid history in the past. In 1997, the area was redeveloped into a park and proper documentation of the monuments started. The park is now spread over 200 acres with 100+ monuments out of which around 70 are given “protected monument” status by the ASI.

The park encompasses architectural relics from almost all periods of Indian history, however, it was inconceivable to cover all the delights in one walk but I managed to get some of the highlights.

The walk kicked off from the crumbled and ramshackle remains of the tomb of the last ruler of Mamluk dynasty, (often known as Slave Dynasty) Balban. He is believed to start the custom of bending before the emperors.

The tomb constructed during the 13th century is among the initial buildings of medieval times. As I proceeded towards the Balban’s tomb from the ancient gateway, I was stumped by some of its remarkable features. The entrance depicted a unique fusion of Indo-Islamic architectural skills as some of features such as conical roofs, a slightly pointed arch etc. are the constituents of a Hindu architecture.

The rough paths through the unmaintained turf with some more unrecognized architectural ruins on both the sides lead to the main tomb of Balban. The tomb managed to raise inquisitiveness in me and the fellow wanderers in spite of being in a derelict state. The tomb is accredited for bringing the concept of the semi-circular “squinch arch” and the dome in India. Although, the dome hasn’t survived but structure strongly proposes its existence in the past.

While the tombstone of Balban is missing for reasons unknown, a tombstone of his son with some fading yet beautiful floral design and inscription can be found in the vicinity. The locals can often be seen lighting incense sticks, putting flowers etc. due to their ignorance of its history.

The group then sauntered through the ups and down of the park and reached “Jamali Kamali” mosque. In fact, the area is better known among the locals by this name rather than the park’s name.

“Jamali” was a Sufi Saint and a famous poet who lived during the reign of two dynasties- Lodhi’s and Mughals. His real name was Shaikh Fazulullah also known as Jalal Khan & Jamali. Although, it’s no more an active mosque, still it is one of the most elegant and well preserved structures of the park.

The main attraction of the mosque is the front façade with a mix of white and red stone, carved bands and medallions and the lotus bud on both sides below the parapet give an astonishing view. The small “jharokha” on the façade multiplies its beauty further. The inner walls also have striking design around the spandrels and on the prayer wall also known as mihirab.

Adjacent to the mosque, there is a big courtyard leading to the exquisite tomb of Jamali and one of his close followers Kamali. The doors of the tomb are usually closed but the group leader managed to arrange the key from the ASI officials for the walk. Heartiest thanks to them for their effort.

The tomb of Jamali is so pretty and charming that it felt like we all stepped into some medieval jewel box. The ceilings are intensively decorated with design in blue, red and brown. The extreme detailing with which these design are carved out are truly commendable. The walls also have similar design along with inscriptions from Quran verses and some of his poems. The latticed opening opposite to prayer walls makes way for sunrays to sprinkle the graves with its light.

The walk did not end here; I also visited some more sights such as Rajon Ki Baoli, Metcalf canopy, Quili Khan’s tomb etc.

This trip was originally published on Rediscover Your Dreams.

HotelsMap
SPONSORED
Want to book a similar trip?
I accept the Terms of Use and Privacy Policy of Tripoto.
SPONSORED
Related to this article
Weekend Getaways from New delhi,Places to Visit in New delhi,Places to Stay in New delhi,Things to Do in New delhi,New delhi Travel Guide,Things to Do in India,Places to Stay in India,Places to Visit in India,India Travel Guide,
Tagged:
#New Delhi#South Delhi#Delhi#India#Mehrauli Archaelogical Park#Jamali Kamali Mosque#History & Architecture#city travels#History & Architecture#day trips#historical#historical