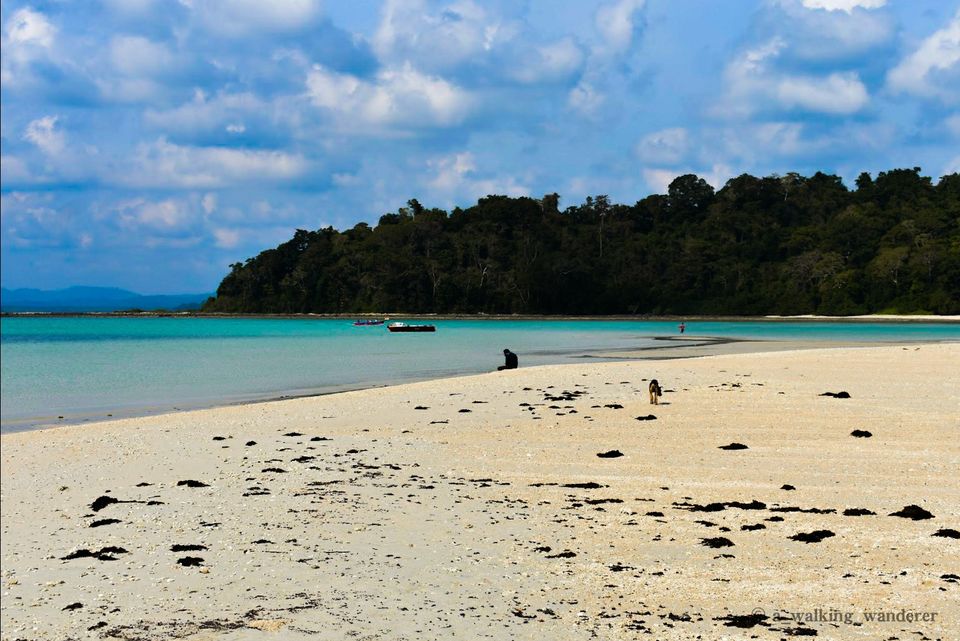 Hey guys! Welcome to a new blog on the story of the untouched paradise of India, the Andaman Islands. Andaman is an archipelago containing a chain of around 572 islands, out of which only 37 are inhabited. Andamans is divided into two parts the north is Andaman and the southern part Nicobar. Nicobar is prohibited by the government for civilians due to a large number of protected tribes. The Andamans has four towns and many small villages. The four towns are named as Diglipur ( northern most), Rangat(middle) Ferrargunj and Port Blair in the south, with Port Blair being the capital of Andamans. The Andamans stretch to the south till little Andaman which is the last island under Andamans administration. Andaman and Nicobar are seperated by 10degree channel, a geographical part of Indian Ocean.. Enough about Andamans let's start with the magnificent trip.

It was the morning of 23rd December 2017 around 5:35AM when Air India flight AI 787 took off from Netaji Subhash Chandra Bose international airport (CCU). In flight I had to switch my seats because there was a senior person who couldn't have responded in case of an emergency so the air hostess requested me to switch my seat to the emergency exit which denied me the best landing view which was visible on the left. But helping others out feels very good so it's okay if I missed something. In flight after 30minutes of taking off breakfast was served. The breakfast contained sandwich, coffee or tea, 2 veg cutlets and two chocolate candies with a complementary water bottle. I heard many times about watching sunrise from flight this time I was lucky to witness it and believe me what a beautiful scene it was. The sun peeping out from the horizon was the best sunrise I have ever seen. Being the month of December it was winter in Kolkata, almost all the passengers were wearing woolen and were shivering inside the cabin in flight. The flight hovered over Port Blair for around 30 minutes as it reached there before time. Finally the landing clearance came and it landed at the Veer Savarkar International Airport (Port Blair) around 07:50AM. After landing first thing all the passengers did was remove the woolens as the temperature was around 27degrees at that moment. I first of all was welcomed by the tour manager who dropped me off at Hotel Dream Palace (30 J N Road, Haddo,, C/o Hotel Dream Palace, Port Blair, Andaman and Nicobar Islands 744102).

After checking in I freshened up and rested for around 2hours. At 1PM, lunch was served at the hotel restaurant. After lunch, the trip started and the first viewpoint was Cellular Jail, also known as Kaala Paani Jail. The jail has no high roofs and had a very painful history. The story of prisoners suffered so much that they wished to be executed instead of spending days there. Vinayak Damodar Savarkar also known as Veer Savarkar was sentenced to two life imprisonments totalling 50 years. His brother too was in the same jail but both didn't knew about it for two years. No high walls guard the jail and the jailers appointed there said that if you want to escape you can escape but where would you head to? The jail is surrounded by sea and the nearest landmass is located almost 1000miles away. If you head towards the jungle you will get killed by wild animals or the tribals which existed in majority at that time on the islands. After spending around 90minutes at the jail we then headed towards Corbyn's Cove beach, the sunrise point of Port Blair and also the least most beautiful beach present in the archipelago. After sunset we headed back to the cellular jail for the light and sound show which perhaps is the best show I have seen. Everyone who has visited Andaman will relate to this. As the story of the jail progresses you will feel how the prisoners were tortured, goosebumps guaranteed. I would like to share a small incident I experienced that day. There is a peepal tree inside the jail premises which narrates the story of the brutal treatment. Whenever the tree spoke about the story a strong gust of wind came through from behind the tree giving an adrenaline rush. This might be a coincidence but it made me feel as if the tree was speaking itself. Anyways after the magnificent light and sound show went back to the hotel and had dinner. After dinner I hopped on the bed and wondered what a magical start to this tour this has been and while thinking about it I slept.

Flying over Bay of Bengal during sunrise 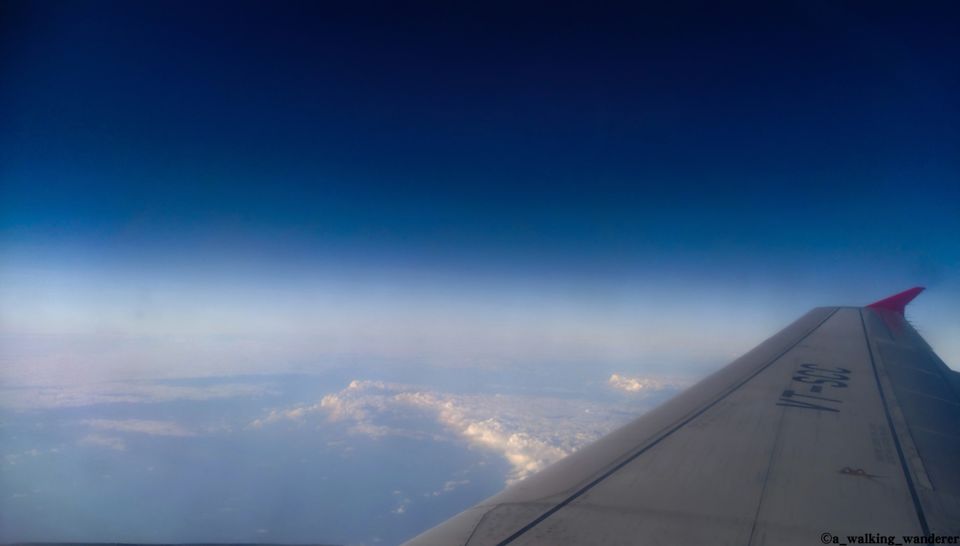 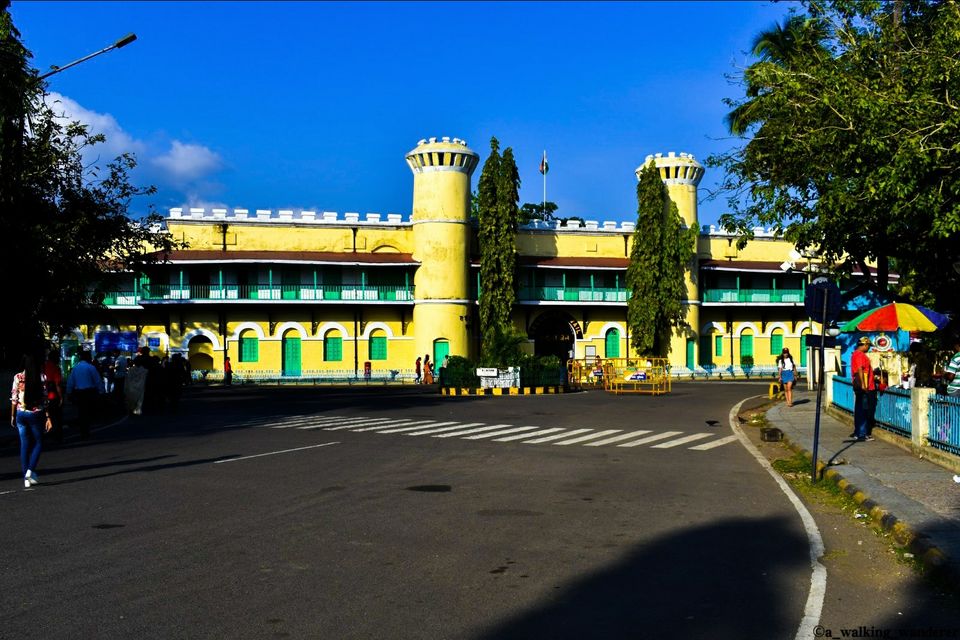 Main entrance of the jail 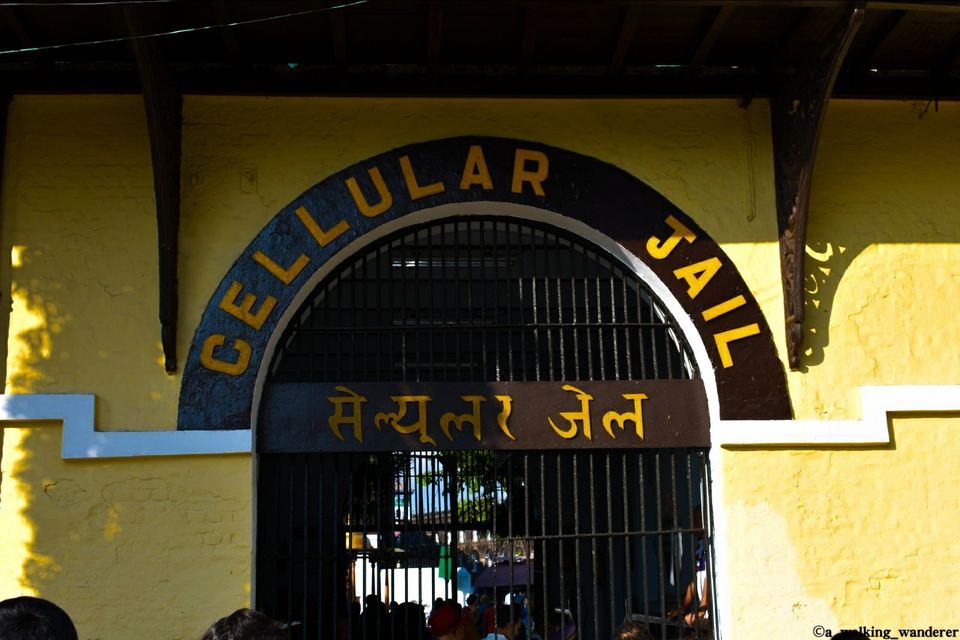 An inside view of the jail 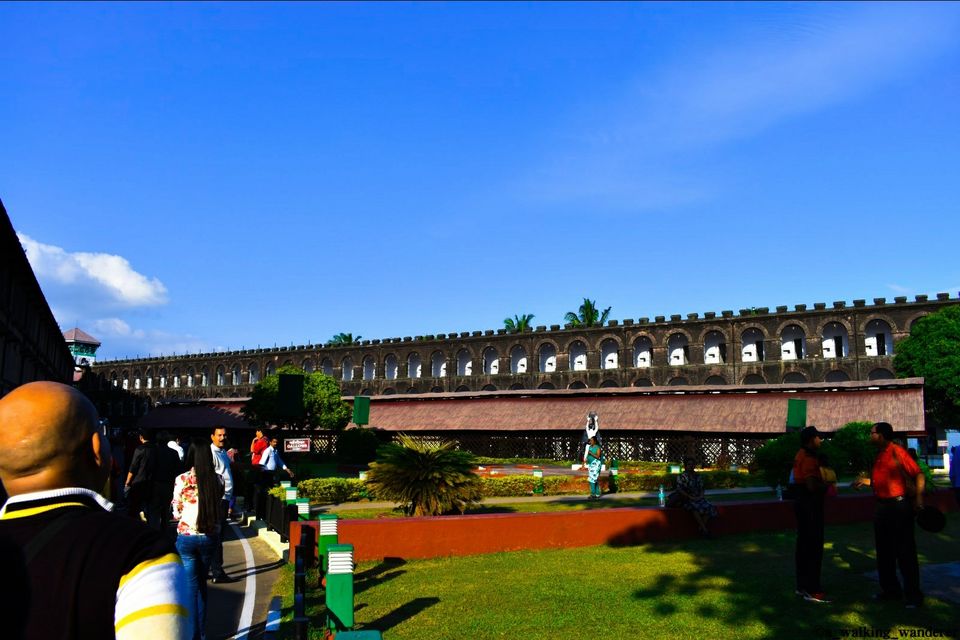 The cell on the top right corner was of Veer Savarkar 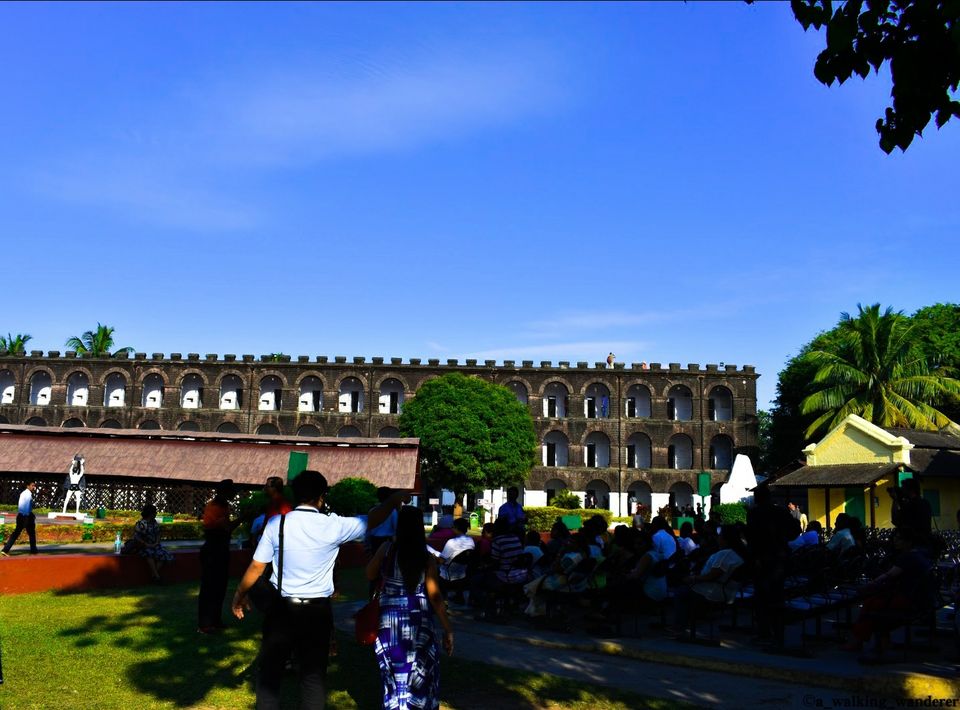 A glimpse of how the prisoners were tortured 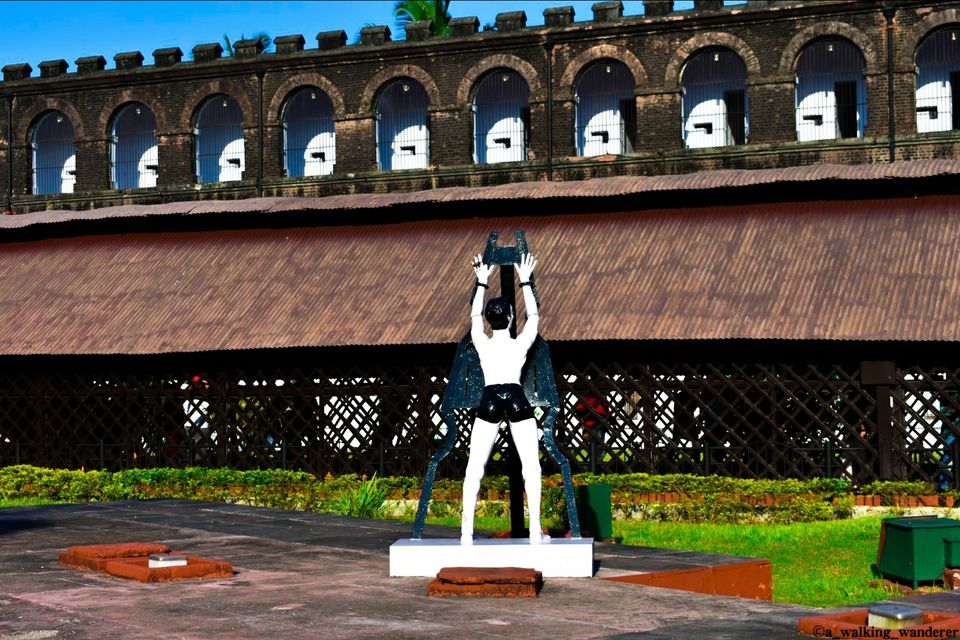 The torture chamber of prisoners 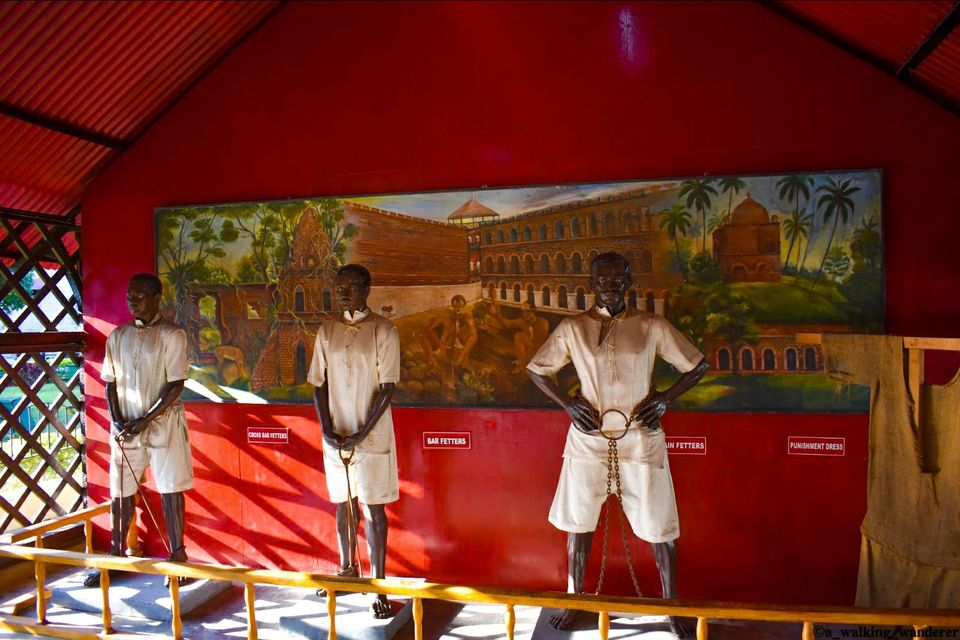 The Cell. Here only a mug was given to the prisoners. They had to spend their entire day with that much of water. They had to sleep on their poop, they just had this small window pane on the top. The agony of the prisoners is unimaginable 😢 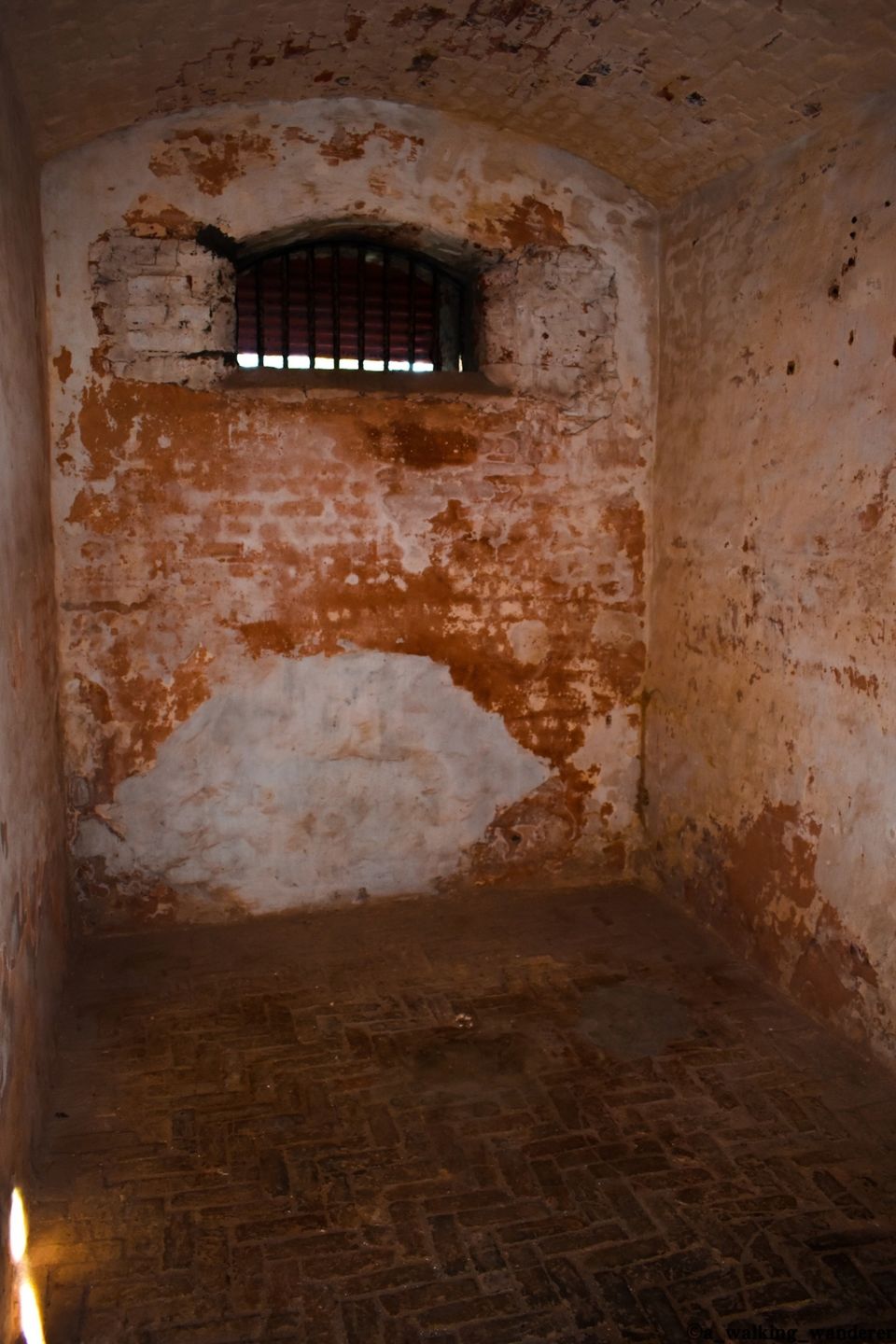 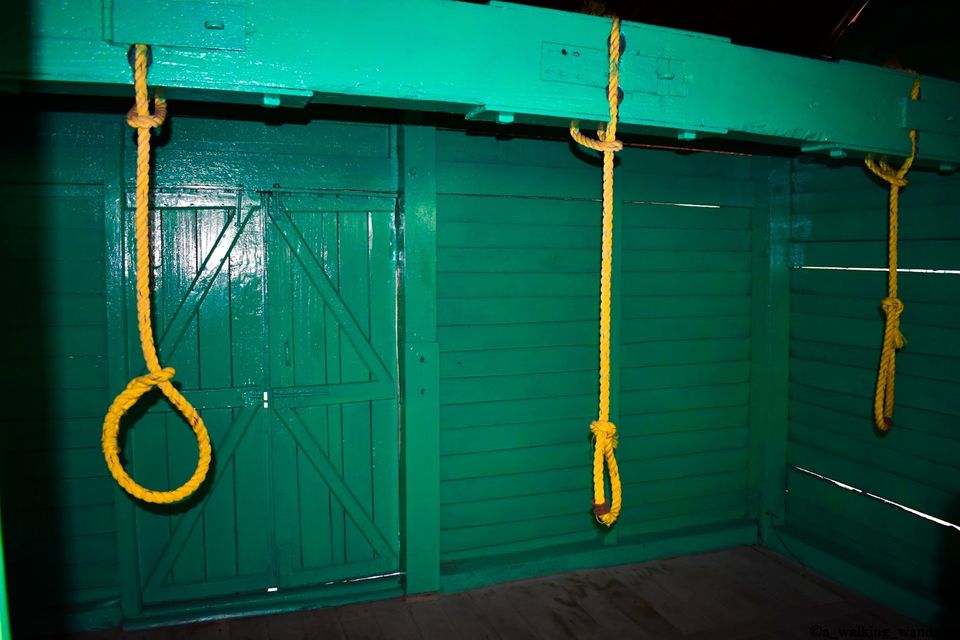 The Akhand jyoti. You will find it right after entering the jail premises 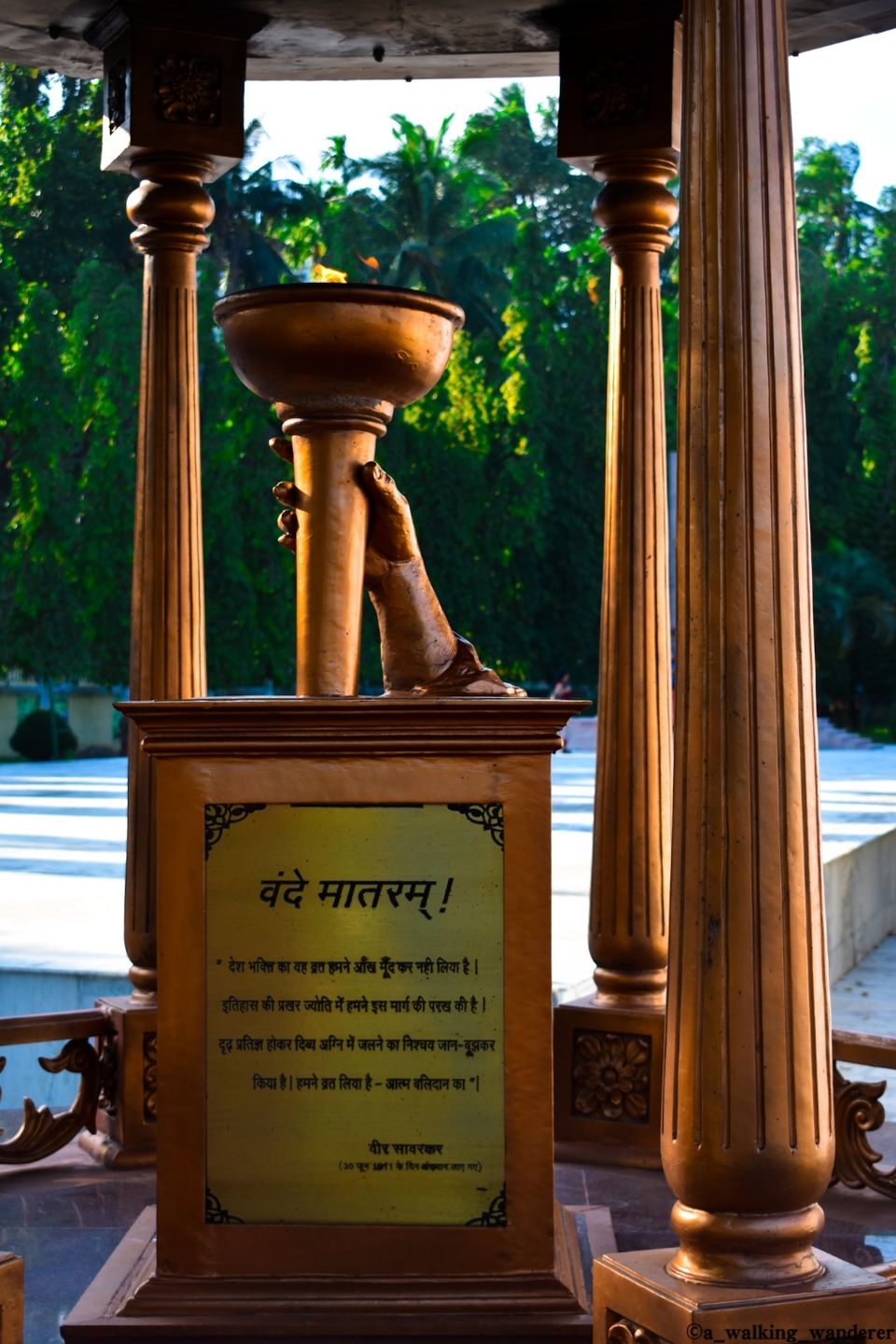 View of Mt. Harriet from the roof of Jail 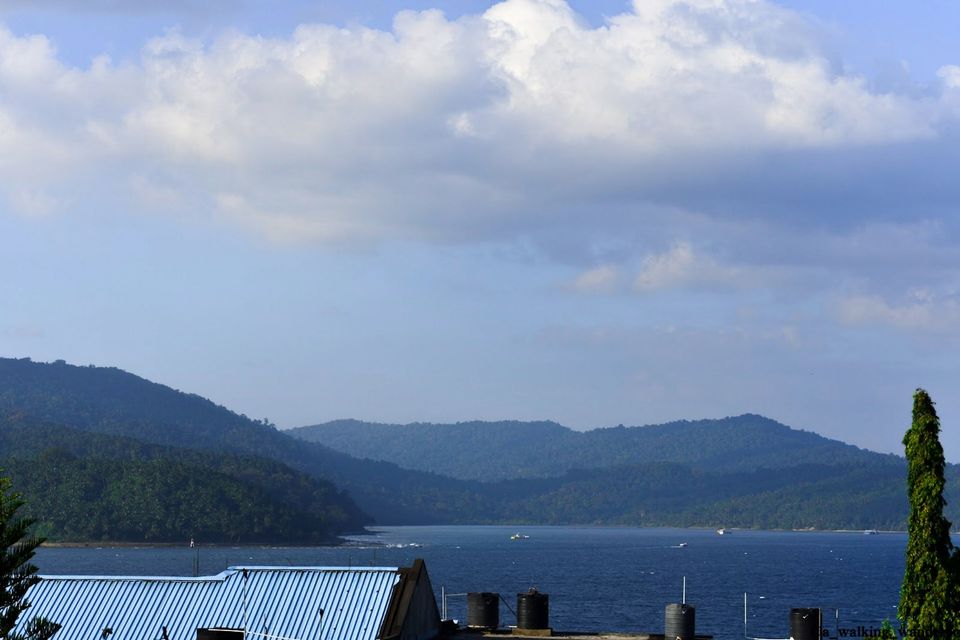 Ross Island in the background 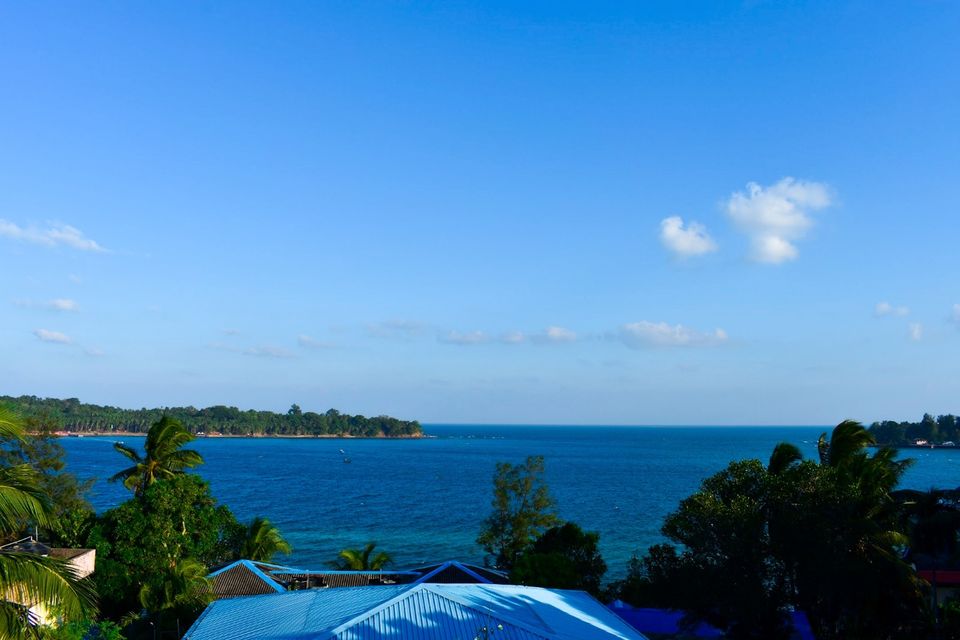 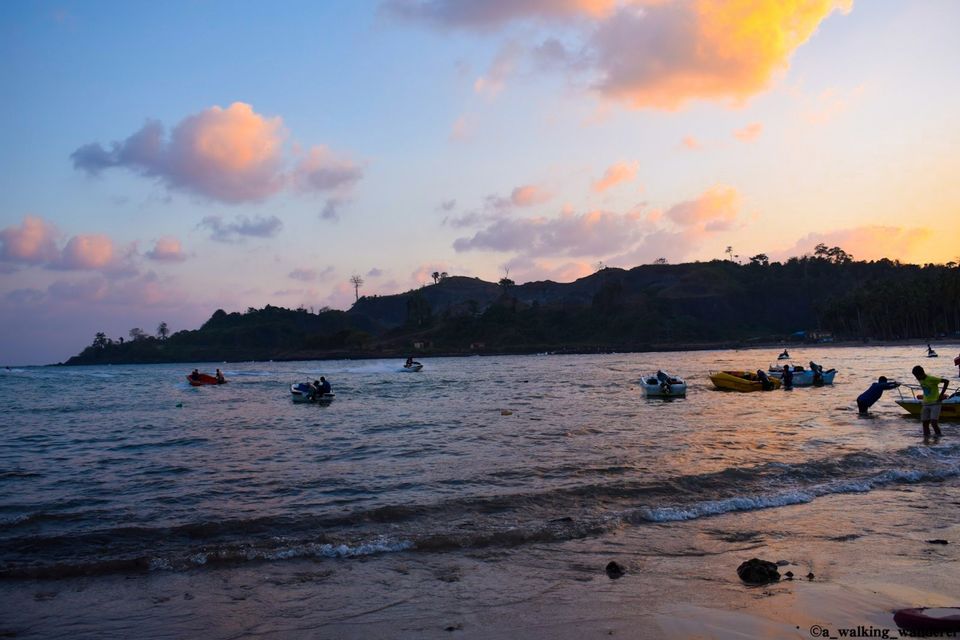 Another view of Corbyn's Cove during sunset 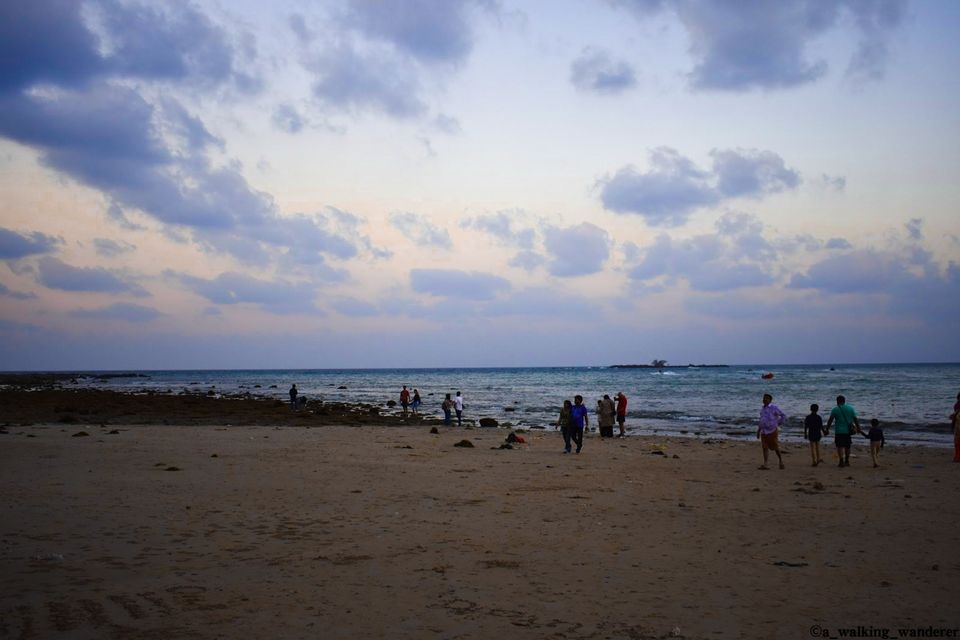 24/12/2017. After an amazing first night in the islands I got ready to explore the next thing the island had to offer. As per schedule I had to visit Ross Island and North Bay island, but the weather had other plans. The islands were closed for public for the day, so the hotelier advised to enjoy the city tour. When I got ready suddenly it was announced that the islands have opened and I'll tour the islands as scheduled. The hotelier dropped me off at Aberdeen jetty from where I had to hop on to a boat which took me to Ross Island. The journey from Aberdeen jetty started off well, I was fearing sea sickness as it was my first time traveling on a boat in an open sea. A while later while the boat was nearing Ross Island, high tide struck and the waves started toppling the boat. Passengers all around me started vomitting, every now and then someone was vomitting, thanks to God it didn't trouble me otherwise the tour might have gone haywire. After toppling and twisting the boat reached Ross Island. Note a tip, Ross Island shuts at 1PM. It is under the management of Indian Air Force. You will only find Deers and Peacocks on the island. Ross Island was then the British capital in the Andamans and followed Calcutta Time zone. If you don't know then let me inform that when the Britishers ruled India they divided the country into three time zones, Calcutta, Bombay and Railway time zone. All the management was done through Ross Island. On the island you will witness ruins of several bungalows, church, market, cemetery, offices etc. And view of the islands and Andaman Islands from the peak of the island is breathtaking. It was time to leave Ross after spending around an hour exploring the island. Next stop was North Bay island. This island is mentioned on the back of Rs. 20 note. It is a famous diving spot in the Andamans, here apart from diving you can experience Snorkeling, sea walking, swimming, glass boat ride,etc. Again the passengers vomitted throughout the journey, it took around 40 minutes to reach North Bay island. I was excited as it was suggested that I could dive here but since it was around 3 pm, the dive masters advised not to dive here as many fishes and corals won't be visible. So he suggested to dive either in Neil or Havelock. Other people went for Dolphin boat ride and I explored the islands. A local dive master stopped me from going to the light house as he advised not to venture out alone up. So I just watched people train and dive, snorkel and swim as I just sat clicked a few photographs of the magnificent island. After sunset we were dropped off at the Aberdeen jetty, so it was another experience of travelling in a boat in the dark also in open sea. After freshening up in the hotel, I went outside to explore Port Blair at night. I found a shipyard just few steps ahead, beside it was a park where I sat and heard the peaceful sound of sea and watched the maintenance of ships anchored there. Later, after having dinner I thought how fool I was to underrate Andamans as this was turning out to be one of the most amazing trips I have ever covered. This marks the end of Part 1. If you are still reading then I hope you enjoyed part 1 & Part-2 coming soon. Till then stay happy, take care, Bye bye. Have a happy week ahead ❤️❤️❤️❤️

The native of Ross Island 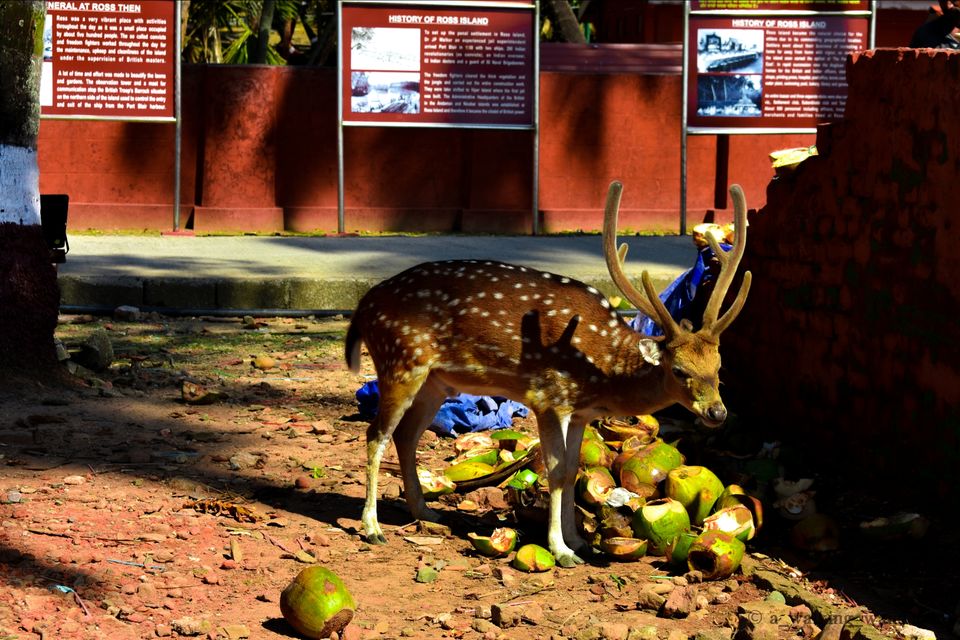 Another one roaming freely on the island 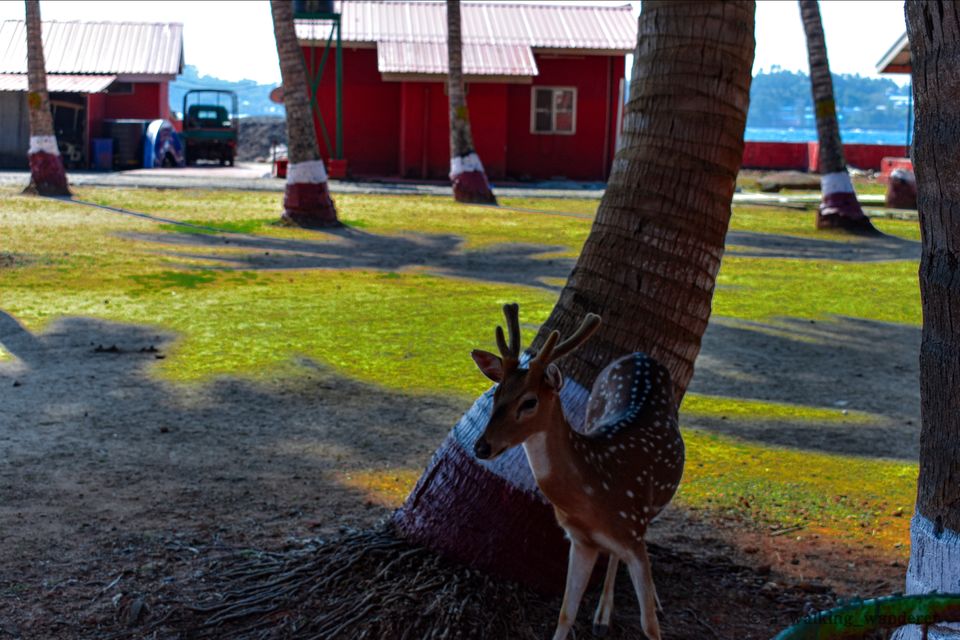 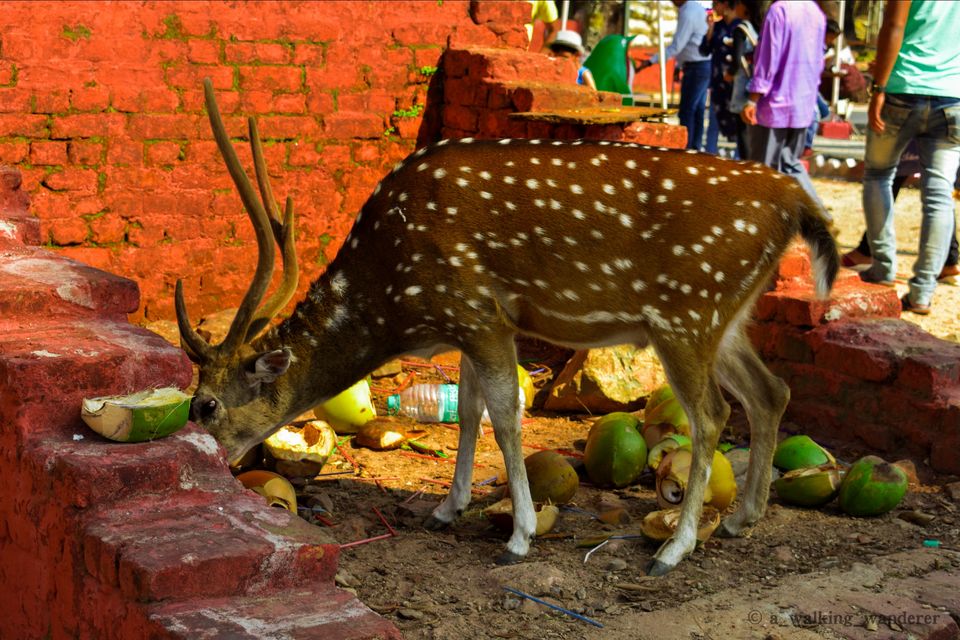 A view of Ross Island inside out 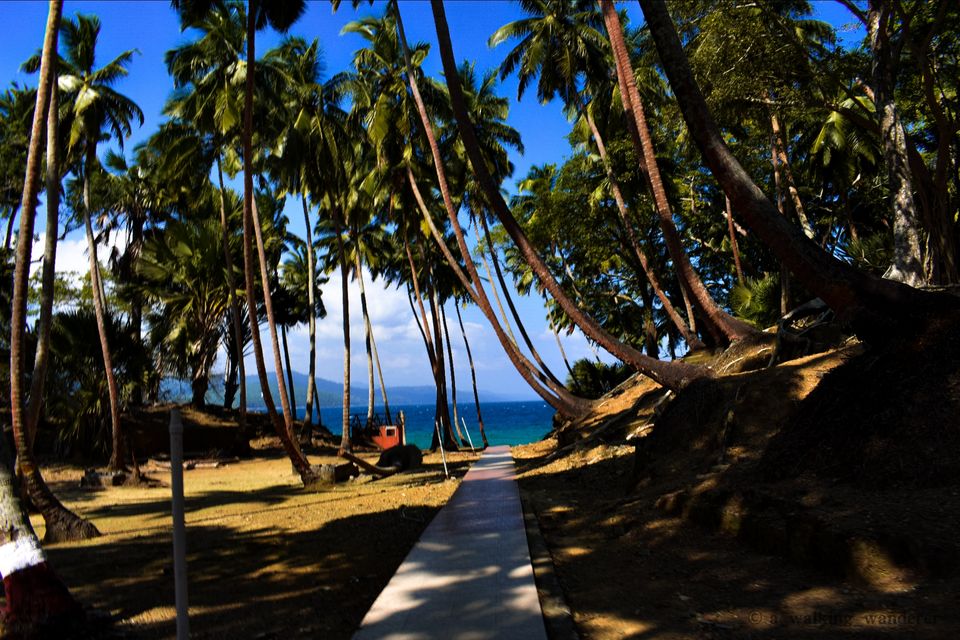 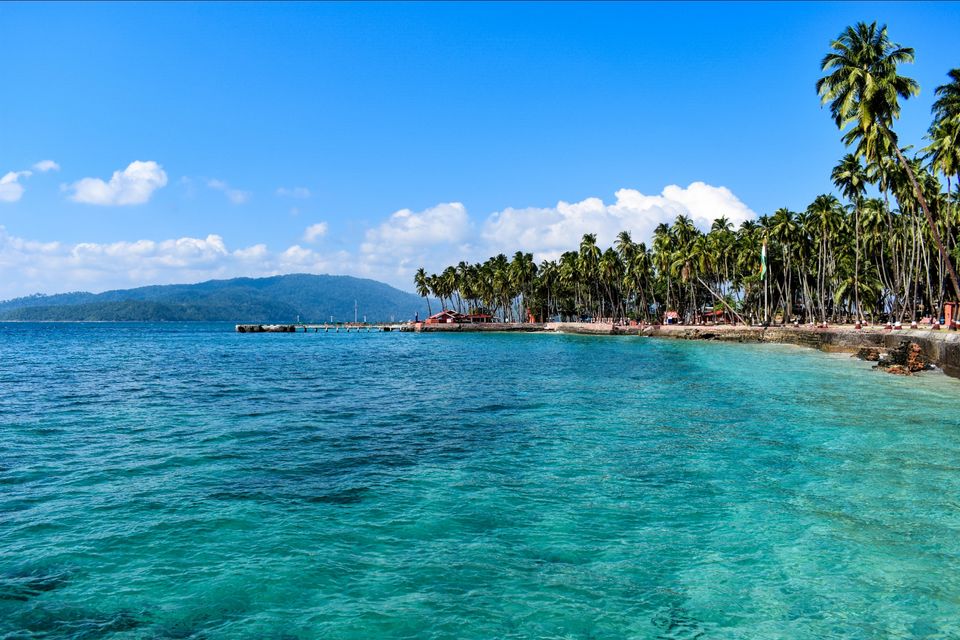