Pushkar Lake - A Holy And Pious Site in India 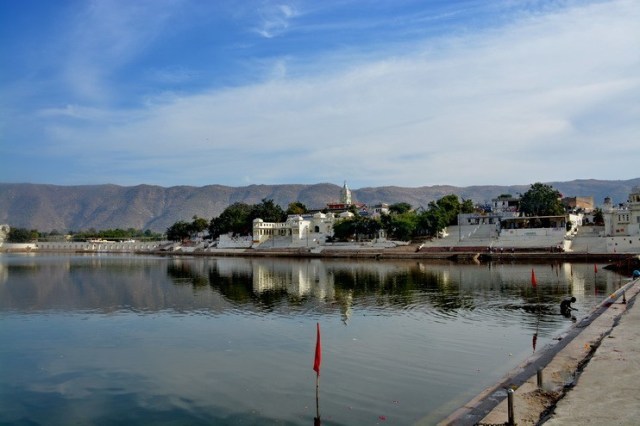 History, culture and divinity intermingle into one of the prominent tourist destinations of India. It is none other than the holy and charming Pushkar Lake in Rajasthan. Sacred at heart and beautiful at the core, the lake is the preferred sightseeing spot for pilgrims and travel enthusiasts.

The lake is a symbolic representation of the ancient history of India and its pious significance. Every year thousands of people visit the lake to attain peace and calm their minds and soul. Such is its power of purifying the human heart, enticing all in its astounding wonders.

There are approximately 500 temples and 52 bathing ghats encircling Pushkar Lake. Locals and the devotees belief a holy dip in the lake waters leads to a path of salvation and eternal spirituality. The Lake is famous for the Pushkar Fair, renowned in Asia as the largest fair for camels.

The History and the Myth

The lake has earned its name from its place of origin, Pushkar or "Tirtha Raj", one of the oldest cities of Rajasthan. Historians believe that lake existed from the 4 th century BC. The analysis is based on the evidences in some coins and inscriptions. Fa Xian, a Chinese traveller, had mentioned about Pushkar lake in his documents too.

Hindu mythology states about 5 holy lakes or Paanch Sarovars, among which Pushkar Lake is the most renowned and pious. Henceforth it is the preferred destination for worship and prayers.

The old records and artefacts as studied by the archaeologists and historians, award the establishment of the lake to Nahar Rao. He was a Rajput ruler and was suffering from Leukoderma, a skin disease. He had once dipped his hand into the lake waters and amazingly his hands got cured. Astonished and delighted with its magical power, he created an artificial lake for the benefit of the human world. Since then, the lake has undergone several renovations enhancing its beauty and being surrounded by temples and ghats.

The Unique Characteristics of the Pushkar Lake

Hindus visit the lake especially during the Kartik Poornima, a full moon day between the months October and November. An auspicious dip in the lake waters relieves them of all the sins, purifies their soul and cure them of all skin ailments. As per the records, Pushkar Lake is listed among the ten sacred Hindu religious pilgrimage sites in the world and among the five in India.

The Lake is particularly popular for hosting the famous Pushkar Fair. It is held every year during Kartik Poornima. People from all over India and abroad visit the fair at this time to witness a wide array of events held at the fairgrounds. The city and the lake are dedicated to Lord Brahma, the creator of the Earth as per Hindu mythology. The fair is organized in honour of the Lord Almighty.

Several cultural events are arranged by the fair authorities like folk songs, music and dances. Different sports events are held for both men and women, the tug of war being the most popular one. The international tourists participate in the fun-filled activities hand to hand with the locals. The fair experiences a huge influx of tribes from various parts of Rajasthan, attired in vibrant coloured traditional dresses and jewellery.

The fair has attained a high importance for anchoring the largest camel fair in Asia. About 50,000 camels are brought in the fair, adorned in colourful costumes to entertain the tourists.

The Key Attractions of the Lake

The ghats and the temples are the prestigious possessions encompassing Pushkar Lake coupled with the religious essence of the city itself. There are 500 temples adjoining the lake, some of which are in the ruined state while some still stand upright with their iconic structures. The Brahma temple is the most prominent among them, existing for almost 2000 years. It is a must to visit the temple after a holy dip in the lake waters. People visit the three other temples nearby, the Savitri, the Varaha and the Gayatri temples.

Coming to the bathing ghats, there are about 52 of them. The ten ghats located close to the lake have been declared by the Government of India as the "Monuments of National Importance". Gau Ghat is among them, the ashes of Mahatma Gandhi, the Father of the Nation, was immersed here. Varaha ghat earned its name from Varaha, an incarnation of Lord Vishnu, who appeared here. Brahma ghat is named after Lord Brahma after he took a bath at this place. The other ghats among the ten are Saptarishi, Dadhich, Kota, Gwalior, Jaipur, Yag, Gangaur and Karni.

The Natural Beauty of the Lake

The lake has been the potential candidate for many renowned artists and painters, brushing their strokes of the enigmatic beauty. The lake with the Aravalli hills at the background offers a breathtaking view of the exotic landscape. The footbridge is worthy of appreciation lined with arches, a pathway towards the lake.

Pushkar lake beams with its exotic flora and fauna, a treat to the eyes. Fish and other marine animals are spotted at some portions of the lake. You can watch the camels and the cattle near the lake, grazing in their natural habitat. The desert plants and shrubs can be found at the banks of the lake.

Ensure to place your shoes far away from the ghats as a mark of respect for the Hindu religion Avoid usage of words that demean the Hindu religious beliefs Smoking is highly prohibited in public Consumption on non-vegetarian products like meat, egg is strictly not allowed and even liquor Shoes are not allowed near the lake or at the ghats Full-length clothes are mandatory for men and women

The best time to visit the lake is the winters, preferably between October and March. The weather is soothing and pleasant for a nice stroll along the lake and seek the blessings of the Lord.

It is well connected with all means of transport. The Ajmer railway station, and the Jaipur airport are the nearest to the lake. Buses and cars are available in abundance to reach the lake.

Hope you enjoyed the virtual tour of Pushkar Lake. Next time you visit Rajasthan, be sure not to miss it.