Visit Rajasthan in 2021 For Witnessing the Grandeur Expedition 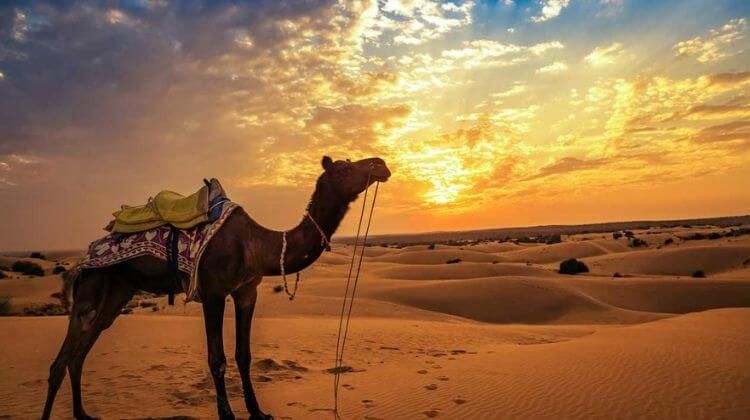 Rajasthan- a state that is not just the birthplace of chivalrous kings, but also has its own royal ship and magnificent history.

The history that has always been the favorite topic of historians, archaeologists, and filmmakers. Bollywood's love towards choosing Rajasthan as a central location for the movies has passed down through generations of filmmakers.

Starting from 'Guide' to 'Padmavat', Rajasthan has maintained its integrity and virtue among Bollywood cinema. The stunning dance of Wahida Rehman in the movie 'Guide' was shot at Chittor fort of Rajasthan. Vijay Anand 's 'Guide' captured the sheer beauty of Chittorgarh Fort with the help of Wahida Rehman's alluring dance.

The fort is a UNESCO world heritage site and has been contributed a lot to Rajasthan Tourism department. Some of the shots were also taken at Fatehsagar, Surajpole, and Hathipole. There are many shots in the movie where you can find Dev Anand explaining about the Udaipur fort to the tourists.

One of the best thing about Rajasthan is that the state has its deep roots in its culture and traditions and that is the main reason that Bollywood is always attracted towards its dignity and grace. Filmmakers are flocking around the Rajasthan in order to capture and reveal the hidden beauty, courtesy, and delicacy of the state on a 70mm screen.

If you ask me then nothing can be the best way than cinema to depict the true essence of any state. The iconic song 'Badra Chaye' from the movie 'Mera Sayaa' has been shot at Lake Palace in Udaipur.

This 1966 hit movie not only popularized Bareilly with his famous song 'Jhumka Gira re Bareilly ki bazaar me', in fact, it also took us in the lap of various palaces of Udaipur, for instance, some of the parts of the movie was shot at Jagmandir Palace, Dudh Talai, and Lake Palace.

The architectural marvel of Rajasthan has always been the picture perfect in terms of shooting films. From last few years, Mandwa, Jaipur, Jodhpur, and many other cities are becoming the hotspot for Bollywood filmmakers.

Nowadays, filmmakers are getting more interested in the rustic lifestyle of Rajasthan; They are venturing more into Havelis, ancient monuments, panoramic locales, and small villages and trying their best to give their audience the feel of more realistic view of rural life.

Instead of contributing profit to tourist destinations of other countries, Bollywood filmmakers are now enriching their own country with their movies.

Not only Bollywood, but Hollywood has also been interested in Rajasthan since ages. 'Octopussy', 'The Best Exotic Marigold Hotel', and 'The Cheetah girl: One World', these Hollywood movies have also contributed towards Rajasthan Tourism.

One of the famous movie of Hollywood- 'Octopussy' was produced by Eon Productions and was among the series of James Bond movie. The most part of the movie was shot at The Monsoon Palace, Udaipur. The hotel, which was mentioned as Bond's Hotel in the movie was the Shiv Niwas Palace, Udaipur Rajasthan.

Some of the shooting locations were Lake Palace and Jag Mandir. Another Hollywood movie that can be seen as promoting Rajasthan is 'The Cheetah Girl: One World'. This 2008 Disney movie was shot at City Palace, Saheliyon ki Baadi, and Sukhadia circle. All these locations are situated at Udaipur, Rajasthan and the movies are a whole lot of a roaming around the captivating locations of Udaipur.

Jaisalmer has always been the brilliance of the desert and there are many such locations that are cherished by filmmakers, for instance, the prime shooting location that is favourite of Bollywood directors is Jaisalmer fort, then we have Gadsisar Lake, Tazia Tower, Salim Singh ki Haveli, and Desert National Park.

Mandwa, a small village situated in the heart of Shekhawati region of Rajasthan has become one of the favourite hotspots for Bollywood filmmakers. The 2015 hit movie of Salman Khan- Bajrangi Bhaijan was shot at some parts of the Mandwa. There are some other Bollywood movies such as P.K, Paheli, and Jab We Met that are shot in Mandwa.

The famous song of 'P.K' movie 'Tharki Chokro' was shot entirely in Mandwa. Shahrukh Khan is the love of Bollywood and his movie 'Paheli' depicts what a true Rajasthani man is. The camel race, the dance, colourful houses, the Lalgarh Palace, and the entire road trip to Bikaner, everything in the movie was captured keeping Rajasthan in mind.

Mentioning Rajasthan without Padmavat can be unjustified with the state. Sanjay Leela Bhansali went onto another next level in order to give a perfect picture to the frame of his movie 'Padmavat'. The most part of the shooting took place in Chittor Fort, but after the movie set was vandalized by Karni Sena, Sanjay Leela Bhansali created his own set up of Chittor fort and completed the entire shooting of his 'Padmavat'.

The film is in itself a grand venture into the history of Rajasthan and its culture. Sanjay Leela Bhansali has always been grand in terms of his movies and their set up and this is one of the most important things that he has never compromised with.

The story of a fearless Rajput ruler Maharawal Ratan Singh and his beautiful wife Padmavati and their encounter with the barbaric king of the Delhi- Alauddin Khailji. The initial shooting of the movie took place at Jaigarh Fort in Jaipur but later due to conflict with Karni Sena the movie was scheduled to be shot at Mumbai sets. Another epic movie 'Bajirao Mastani'was shot at Amer Palace, Jaipur.

So, if you are heading towards Rajasthan, then make sure you plan a road trip so that you can witness the beauty of Desert and Royalty of the state. Rajasthan is full of hidden, unseen, unexplored, and unrevealed locations, you just need to reveal the secrecy of the state!