The adventure of this day began with the newly rented old car and Theresa. Theresa is from the States but found her love in traveling and Barcelona. She is an art Ph.D. student and was up for a residency in skagastrond (North Iceland). Tall, blonde, with hair like Rapunzel and a complete kickass. It isn't that easy to drive in Iceland and this has nothing to with the roads, but with the scenery. It's a multi-tasking project between driving, being stunned and taking pictures. The best part of renting a car is that you can literally stop anywhere you want. So that's what basically we were doing. In Iceland, you can't expect to just reach your destination as it's literally in the drive up to the place that you would see flabbergasting views.

The first day we decided to visit the Snæfellsnes peninsula. Shouldn't have! We drove in a completely wrong direction that messed up our later plans but more on that in the next blog! The Snæfellsnes peninsula is a bit up North West from Reykjavik and is an absolutely stupefying place. The Snæfellsjökull National park is the highlight of this place. Once you land in Iceland there are multiple tours and travels ready to take you, as it is one of the must-see places! The national park was built in 2001 to reserve the landscape and the ingenious plants in the peninsula and for an ease of tourism. The national park is one of the greatest treasure that Iceland has been blessed with. The diversity in the flora and fauna with the national park ending at a beach is breathtaking. Further, the Snæfellsjökull glacier lies within the park along with many other historical events. 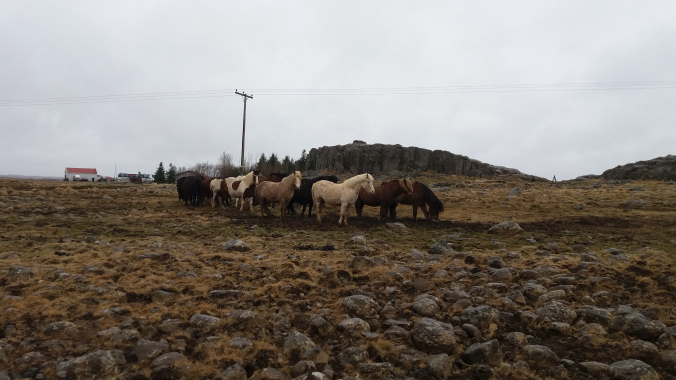 The first point of the day was Ólafsvík and we planned to move down south from there. It's supposed to be a 2 and a half hour ride from Reykjavik to here...but it took us 4! We kept stopping at every 10 minutes because we couldn't decide what to capture and what to let go of! On the way, I saw things that can't be speculated. From mountains right at the shore to crossing bridges with raging seas. From crossing the sea in an underwater bridge to the endless landscape of coarse elegance. From the snow covered mountains which were nebulous enough to hide, to innumerable head blind roads who would surprise us with splendid sceneries. I couldn't have asked for a better place to travel to. That's the allure of Iceland, it's found beauty in discrepancy and discontinuity. One can't expect what would be shown to next. The music, the terrible rain, and the view! I would do it again in a heartbeat. Wouldn't even change the rain!

We reached Ólafsvík around 2 pm and decided to have lunch. It was a simple meal, just tuna, and bread with cheese but we had the view of a secluded waterfall. It was still raining outside and the rain just made me happier. Don't get me wrong; the rain was a nuisance but when looking through the window it gave the eerie feeling of home and happiness. The place we chose was so hidden and non-touristic that seeing another human there got us surprised. Remember this person. He was our unknown journey friend. I don't know who he was, what's his name or anything, but all I know is that he had a duster and we were on the same journey!

Like I said it was raining insanely that day, so almost all the tours to this place were canceled and there were very few people wacky enough to get out today! And I guess we've all established that fact that I am indeed crazy.

We then stopped for the Svöðufoss Waterfall. The falls are majestic and berserk. This might not be one of the best falls Iceland has to offer but none the less they deserve a visit. Falling from approximately 40 meters high they sure astound you. Right next to it is the Kerlingarfoss and feels like a double package deal. By this point the rain was pouring on us in all its fury, hitting our faces so adamantly that it was impossible to see. Theresa was drenched after our little stunt and it also so happens, we met our friend here. Hereafter we stopped to see every tiny little waterfall, Icelandic horses, volcanic rocks covered with moss and every little phenomenon. 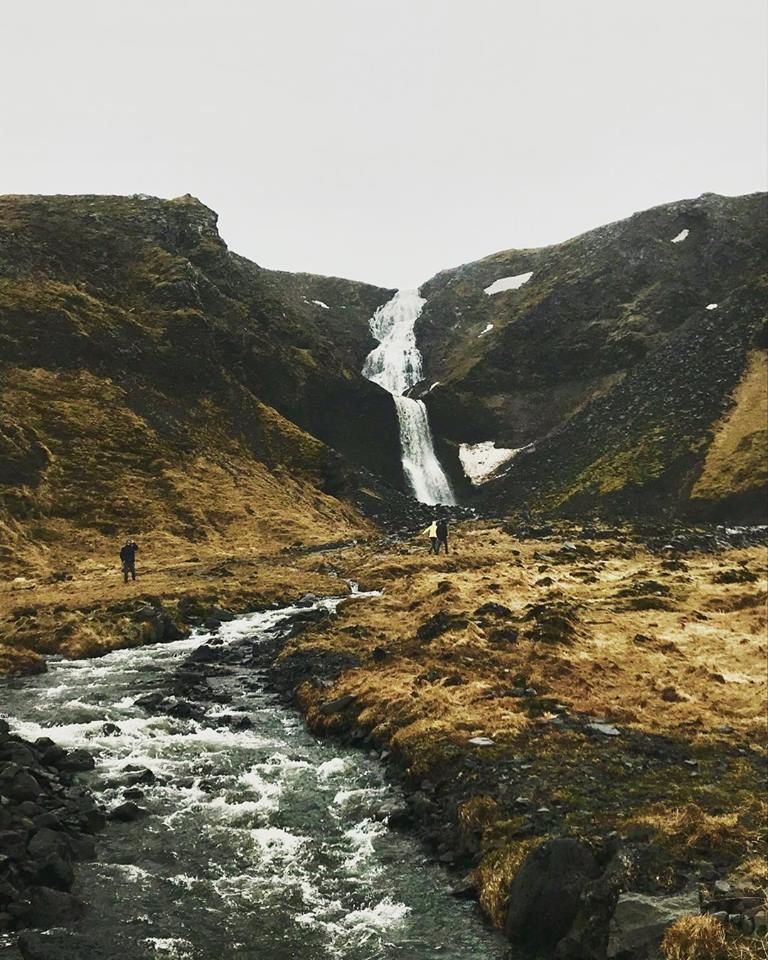 The national park is basically volcanic rocks covered with moss. Miles of black, green and red. No matter how much you see them, you can't get enough of them. Miles of the rocks and one lonely road in the middle. 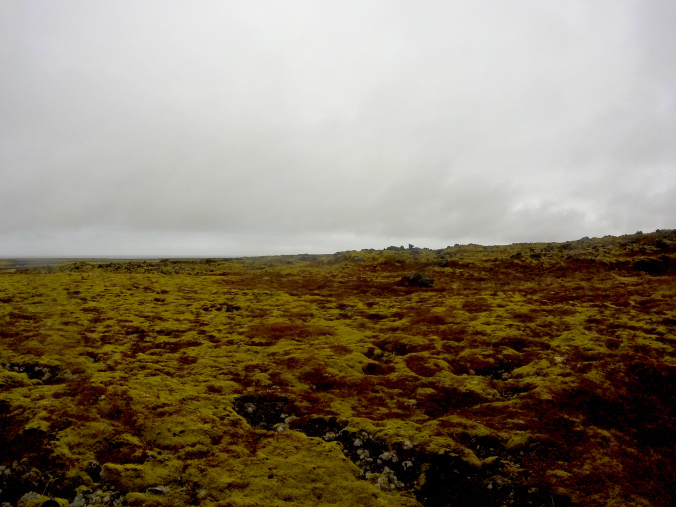 We drove past miles of the volcanic rock moss and shores and couldn't stop being amazed. The next official stop was the Saxholl crater which was erupted approximately 3,000 years ago. It's glorious and I swear climbing up I realized how lucky I was to have the opportunity to be here. Imagine being in the field of the solidified lava now so subtly covered in moss and in the center is the reason of existence for this green turf. There are stairs to take you up the crater giving you a 360° view of the terrain. The climb up is 15 minutes max. The collapsed roof of the crater is fairly deep but you can have a walk around the rim. We stayed here for a while and just sat next to each other. Two days ago this woman next to me was stranger and today she was being written in some of the most important memories I was creating. I was glad that I was sharing them with her, her presence made it 1,000 times better. 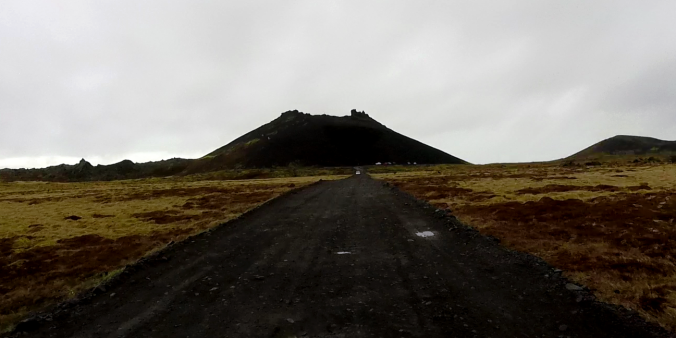 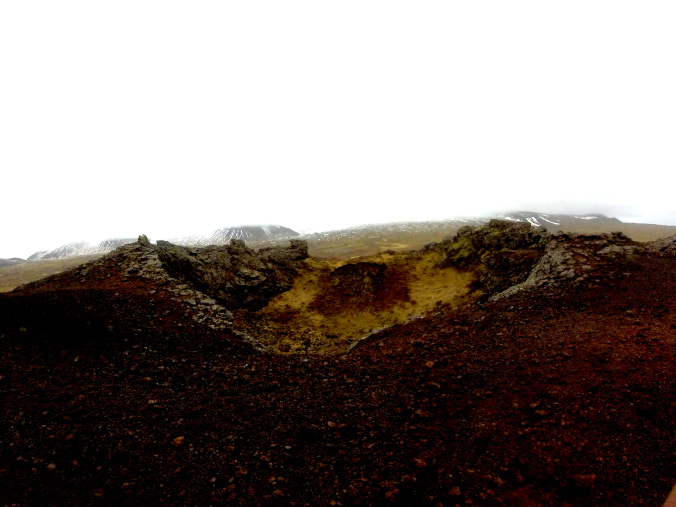 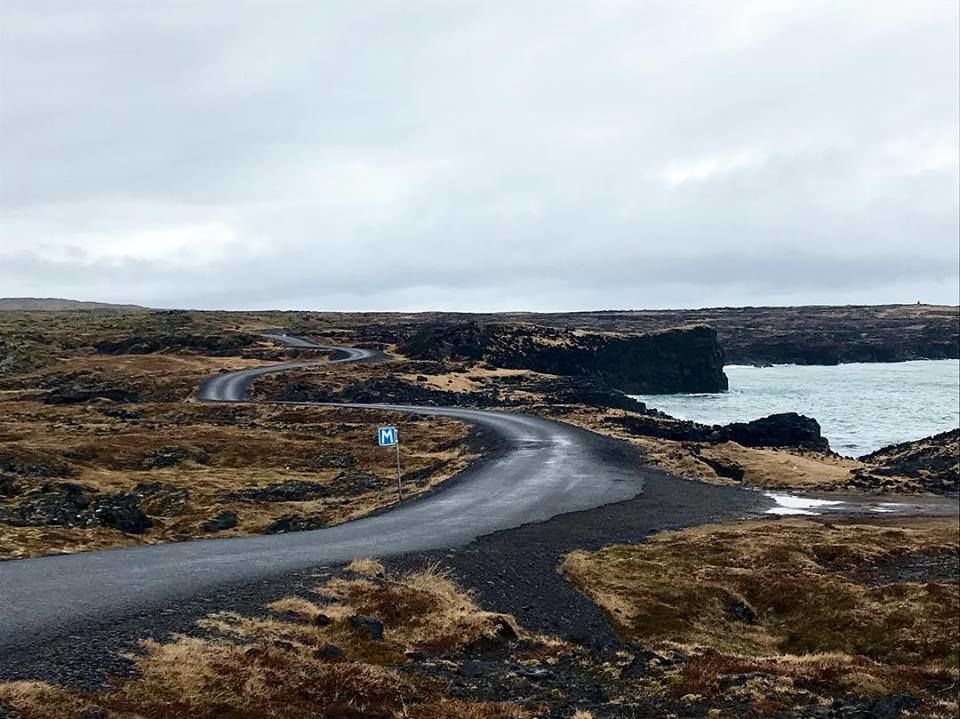 The next thing we wanted to see was the Skarðsvík beach and the cliffs. In our immense joy and no network we kept driving and kind of missed the exit and ended up at the Djupalonssandur. Stumbling upon this way was a blessing in its own way. The place was beautiful but that isn't what I'm talking about. The road leading up to this point was a roller coaster road with my favorite volcanic rocks. To explain them, remember watching the trolls from "frozen"? The land looked exactly like sleeping trolls and I couldn't "let it go". Djupalonssandur is a beautiful pebbled beach, with a series of rocks of mysterious form emerging from the ocean. The rests of a shipwreck can be seen on the beach. It is one of the few areas that lead down to the sea along the coast with its high dramatic cliffs. Legend says "watch out for the famous ghosts roaming the place!"

We exited the national park and started our way towards Reykjavik. We still had a few more stops to make but they were on the way. Next on the map was the Svörtuloft lighthouse. If you are out at sea Skálasnagaviti is called Svörtuloftaviti lighthouse. Bear that in mind that it has got two names - one from land and one from the sea. Out in the middle of nowhere, we drove here just to stay minutes. It was gorgeous but like I've said the drive is way better than the destination itself. I believe you can just keep driving around without a destination and just stop when you see something fascinating. 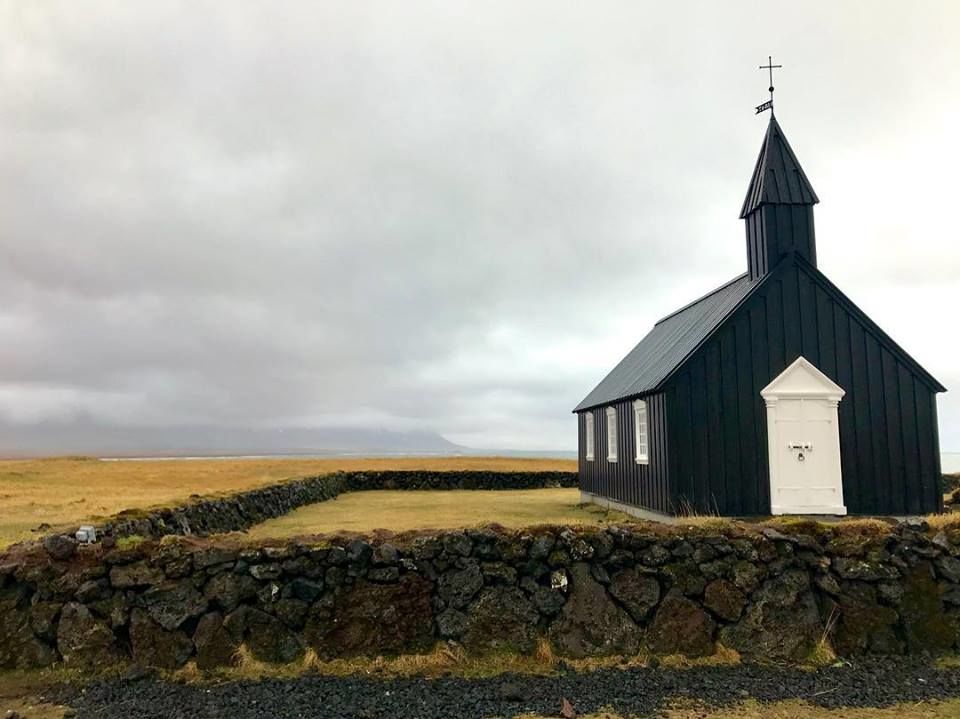 Then we drove to the Búðakirkja church. The specialty of this church is its color: Black! I've traveled to 12 countries in Europe, I live in one and I must have seen more than 50 enormous churches but this little one happens to be my favorite. There was something about it. There was nothing around it, just a small graveyard and rest house a few kilometers away. The minimalistic church against the rugged Icelandic fields and the cloudy background has been etched in my heart forever. 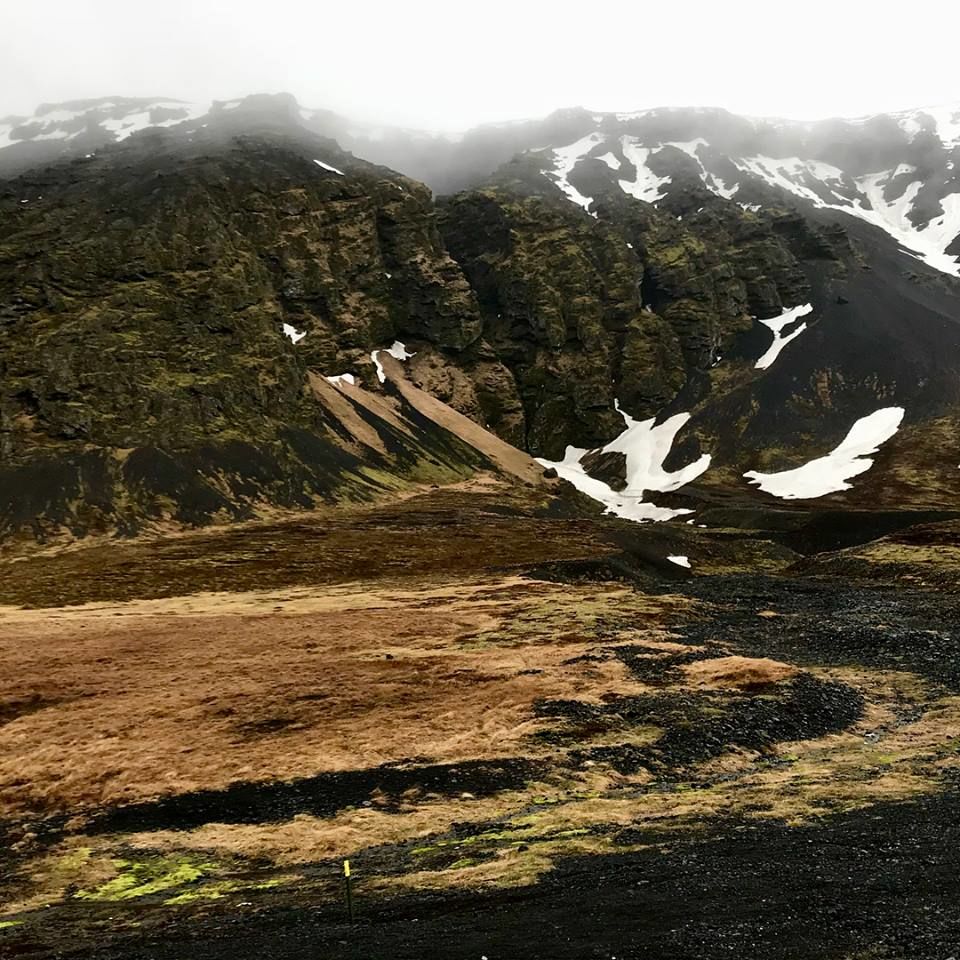 We had just one more thing to see, the Rauðfeldsgjá gorge. Once again we crossed the thing we wanted to see and drove past it. Rauðfeldsgjágorge is a magnificent gorge by Breiðavík cove, cutting into Mt. Botnsfjall. I think it looks so majestic that it looks right out of a game of Thrones scene. 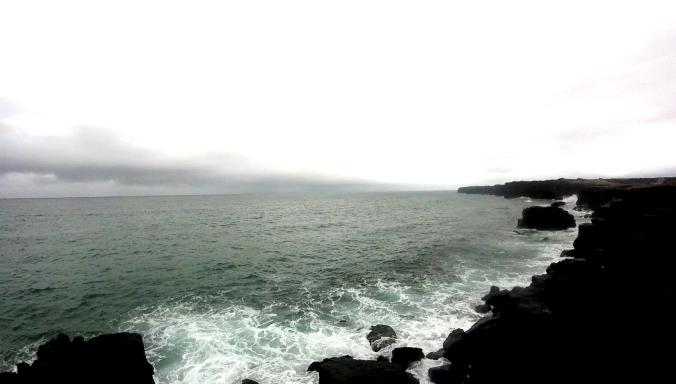 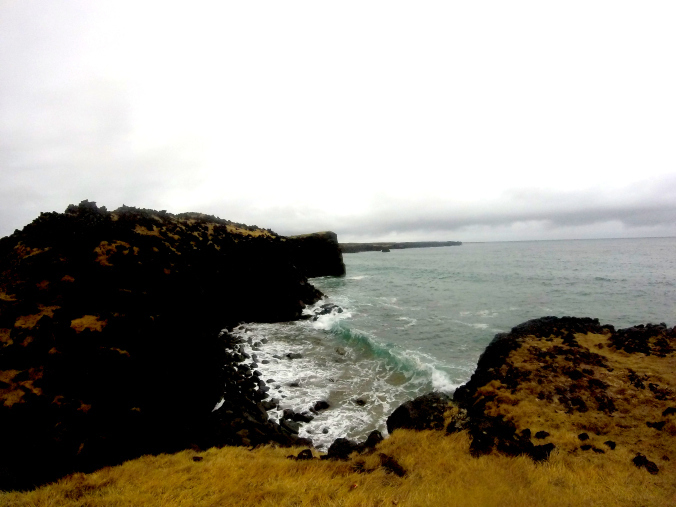 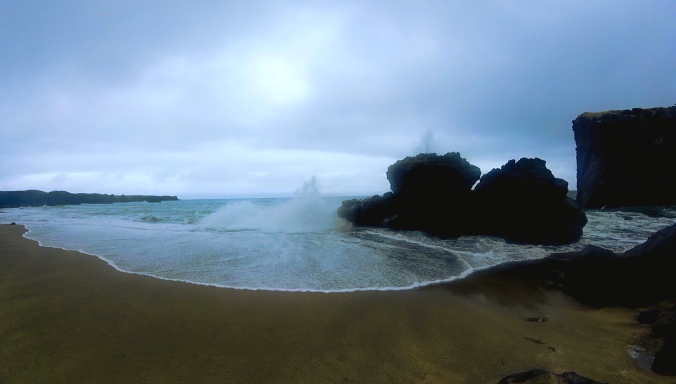 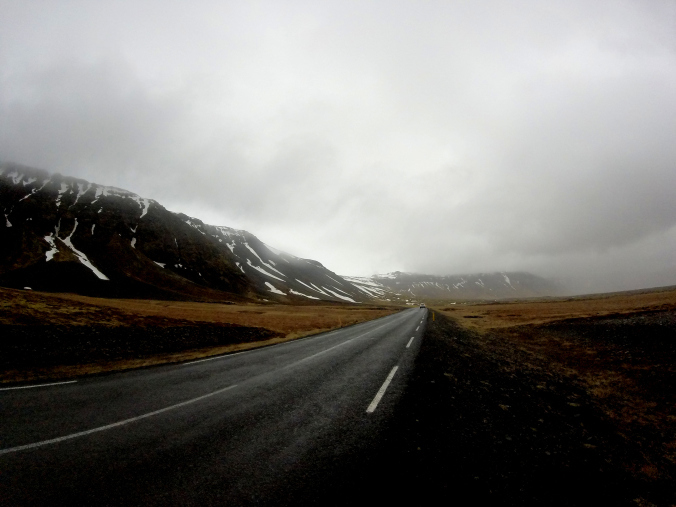 The Skarðsvík beach. There was no one on the beach and it also happens to be the only white sand beach in Iceland. We had it all to ourselves!!! This was the longest we've stayed in any place. Watching the cliffs looming over the vast blueness and the crashing of the waves against them I felt peace and I knew that come anything after this, I've had more happy memories in 2 days than more people have in their lifetime.