The heart of South Korea- Seoul

Seoul, South Korea is one of the most beautiful Country in Asia. It is rich in its culture. It is amazingly amazing. When you visit Gyeongbokgung palace to its north there is National Folk Museum. The museum has several exhibition halls which periodically change their exhibits, showing a wide selection of Korean culture and history. Its opening and closing hours are- March to October - 09:00-18:00 (May to Aug. Saturdays/Sundays/Holidays: closing time extended 1 hour) November to February 09:00 -17:00.

Korea is surrounded by ocean waters on three side, so if you want to visit Korea during your summer vacations, then its absolute must that you visit one of its beaches. The months of July and August in Korea are extremely hot with temperatures rising to 30 degree Celsius. Most beaches around the Nations open during July and August. If you're looking forward to splashing in the sea, why don't you visit Korea in mid-summer, when the heat reaches its peak?

There is an amazing Lotte World consists of the world’s largest indoor theme park (a Guinness World Record) which is open all year around, an outdoor amusement park called “Magic Island”, an artificial island inside a lake linked by monorail, shopping malls, a luxury hotel, a Korean folk museum, sports facilities, and movie theaters all in one place. One of the major reasons tourists are attracted to Lotte World is the amusement rides. The Gyro Drop and Gyro Swing are the top pleasers– a steep drop with an altitude of 70 meters, or taste the thrilling sensation of being inside a tornado. The Flume Ride is a long boat with a high-altitude wave, and the Spanish Pirate Ship swings at an electrifying 75 degrees. Besides the excitement of these rides, Lotte World also contains a variety of parades and laser shows. Its Opening and admission fees are-

Another attractive place for shopping is Itaewon. Itaewon is choc-a-block with trendy bars, clubs, restaurants and shops selling everything from reproduction Korean furniture and tailored suits to jewelry and Korean pottery. Seoul even designated Itaewon as its first ‘Special Tourism District,’ to highlight it as a destination for internationals to enjoy a diversity of culture, shopping, and entertainment experiences. Opening Hours- Daily 10am to late at night.

Seoul is extraordinarily beautiful place one must add it to their bucket list.

Gyeongbokgung palace- This former seat of power is probably Korea's most famous royal palace. Gyeongbokgung Palace is also commonly referred to as the “Northern Palace” because its location is furthest north when compared to the neighboring palaces of Changdeokgung (Eastern Palace) and Gyeongheegung (Western Palace). It was built in 1395, built by built by King Taejo, the founder of the Joseon dynasty. Geunjeongjeon is the throne hall of Gyeongbokgung Palace where the king was formally briefed by his officials, and greeted foreign envoys and ambassadors. It was also the central venue for various coronation ceremonies of the royal household. There's a a large raised pavilion (Kyeonghoe-ru) resting on 48 stone pillars and overlooking an artificial lake (Yolsang Chinwon Spring) with two small islands, which is almost as grand a scene. State banquets were held inside and kings went boating on the pond. Behind these imposing structures are smaller meeting halls, and behind them are the king’s living quarter. On the right is Gyotaejeon, the separate but large living quarters (Chagyong-jeon) for the primary queen "Dowager Cho", and behind that is a terraced garden, Amisan, with ondol (underfloor heating) chimneys (Chimney of Chageyong-jeon) decorated with longevity symbols. Then there's an attractive hexagonal pavilion (Hyangwon-jeong) surrounded by a lotus pond. Hyangwon-jeong was originally connected to the north shore of the pond by a bridge named Ch'wihyang-gyo and the King enjoyed strolling across it to the pavilion. >Admission Fees- Adults (ages 19-64) 3,000 won / Group 2,400 won (10 or more people) Youths (ages 7-18) 1,500 won / Group 1,200 won (10 or more people) Age 6 and under – FREE. >Opening Hours- March to October 09:00-18:00 / November to February 09:00-17:00. 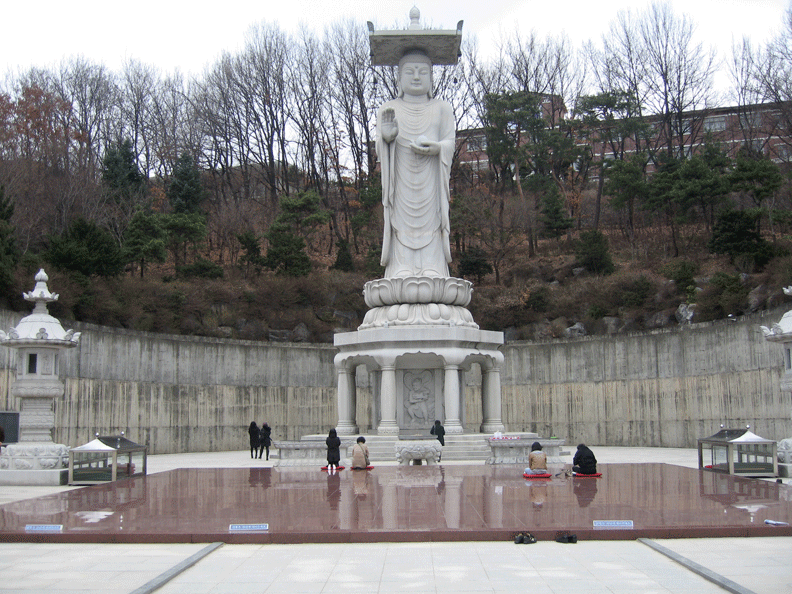 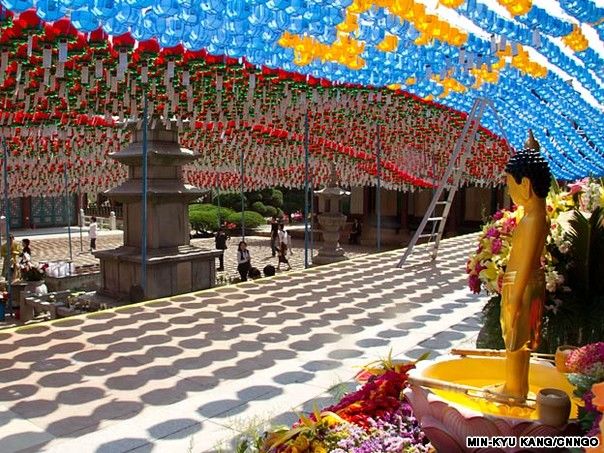 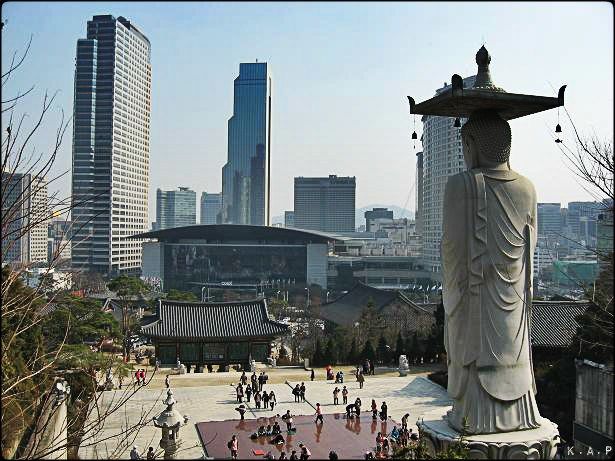 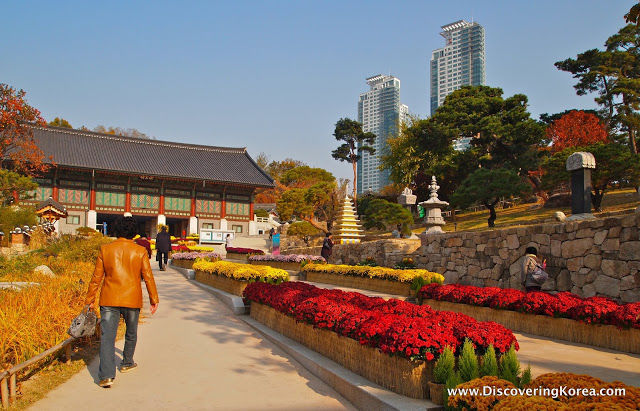 sungnyemun (Namdaemun gate) is one if the most treasured monuments. It is also known as the Great Southern Gate. It is truely stunning. It is one of the Eight Gates in the Fortress Wall of Seoul, South Korea, which surrounded the city in the Joseon dynasty.The Namdaemun Gate is the historical south gate of the city of Seoul when the city was surrounded by walls during the ancient times. Gate still stands as an ancient monument and it is located just next to the famous Namdaemun MARKET. This is one of the main attractions of Seoul and should not be missed when you are there. The fact that most of the stones in this massive edifice are original is one reason why it has been designated Korea's National Treasure No. 1. 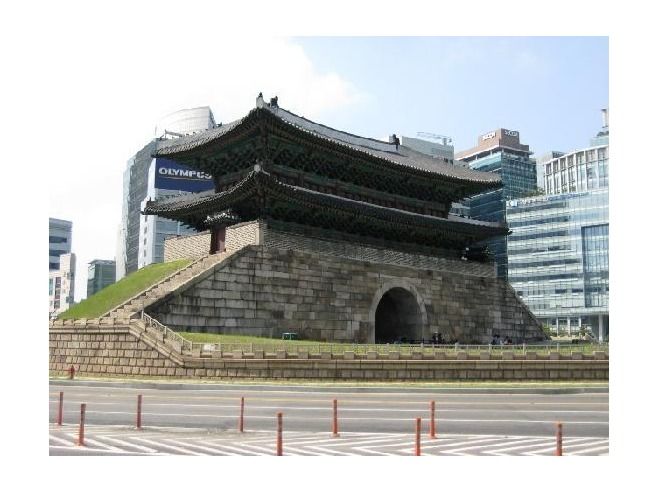 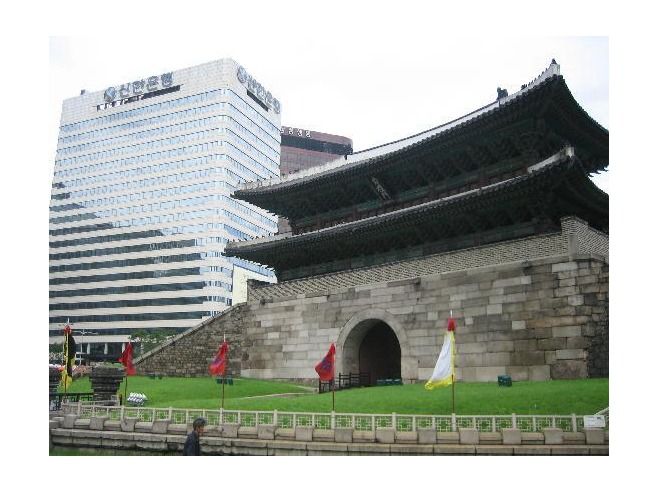 Bosingak is a large bell pavilion on Jongno in Seoul, South Korea. The program of bell ringing ceremony takes place at noon daily (except Tuesdays) and gives locals and international visitors the experience of ringing the bell 12 times. The program is run regularly and foreigners can also participate in the special program without the need to register. Foreign visitors can come before 11:40 a.m. and apply on-site at Bosingak Belfry, where participants will be able to experience a bit of Korean culture through the ceremony. The bell was named Bosingak Bell in 1895 during the 32nd year of King Gojong. The belfry was originally called Jongnu (bell pavilion). A special program called ‘Showing Love for Cultural Assets’ is held on the second and fourth Saturday of the every month. The program is available only to student volunteers. It involves cleaning the area around Bosingak Belfry and participating in a history lesson regarding Bosingak Bell and the bell-ringing program. Foreign visitors may participate in the program on Tuesdays but you may need to pre-register. If you want to see the new year's eve bell ringing ceremony then visit in December, bell ringing ceremony take place on December 31, 2014 – January 1, 2015 (23:30 – 00:30), It is recommended to take public transportation as there will be road closures during the event. the bell-ringing ceremony ushers in the New Year by ringing the bell 33 times at the stroke of midnight. 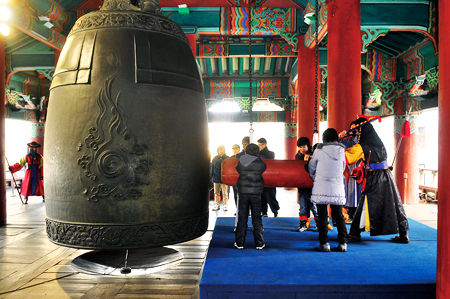 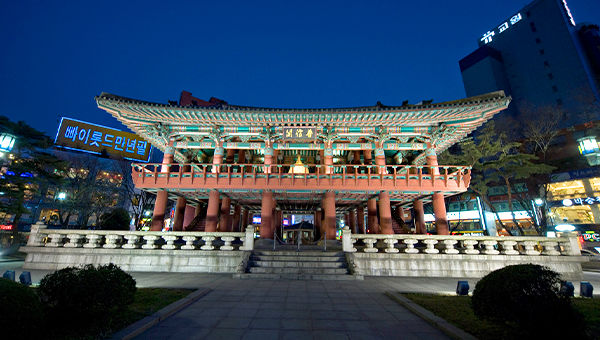 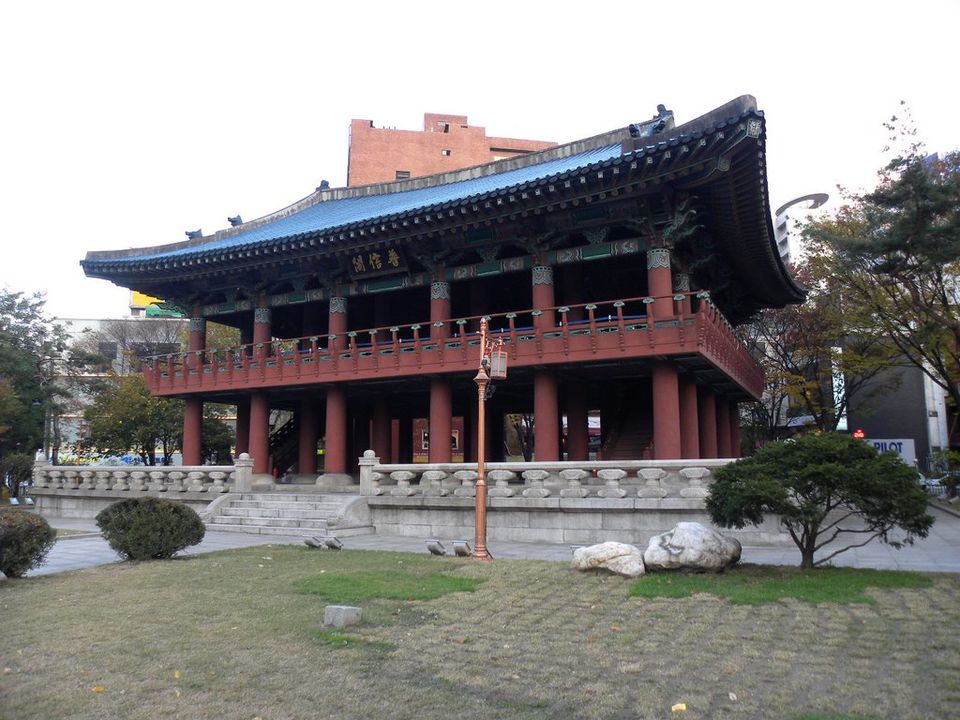