The Quaint Places Of Spain

I suppose I should start with a warning:  If you are not a devotee of European history, stick to the 3 C Rule: More than 3 castles and/or cathedrals in one trip and every one starts to look the same.  For me, three is barely enough.  I see every castle as someone’s home; every cathedral as a place of marriages, deaths, baptisms and so on.  I can’t help but wondering, “who was here?”.   The answer — which almost always includes intricate familial connections and intrigue across borders — is more addictive than crack (or maybe even chocolate).  I simply can’t get enough.

HotelsMap
And, I am almost always stunned by some critical piece of history that I did not know. Case in point: The Alhambra (Granada, Spain). Alhambra was a royal playground that is really more like a city of many castles. It has been inhabited (and enhanced) by many different monarchs across thousands of years. I knew that the Alhambra was a beloved residence of the Holy Roman Emperor Charles V, who caused a great deal of trouble for good old Henry VIII of England. (You remember Henry — he was the famous King who had six wives. He beheaded two, divorced two, and was survived by the last of the six). When Henry wanted an annulment from his first wife in order to marry the beautiful (and ill-fated) Anne Boleyn, it was Charles who stood in the way. Charles was the loyal cousin of wife #1, Catherine of Aragon. Unfortunately for Henry, Charles also had control of the Pope, who, after much dancing, stalling, and considering, ultimately refused to give Henry the annulment. This little drama set off a series of events that reverberated throughout England’s history for hundreds of years. 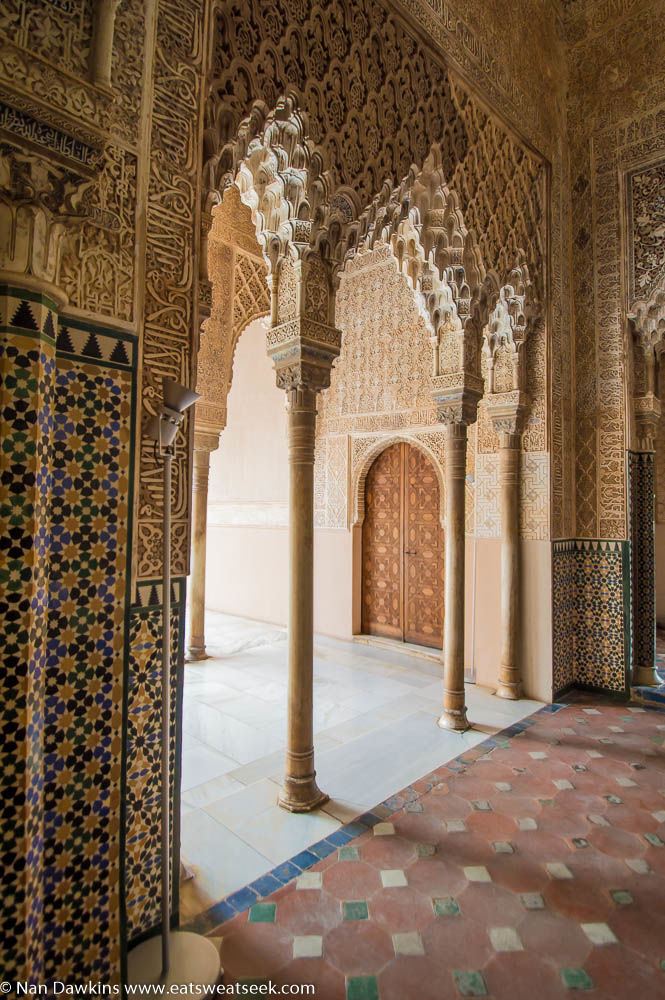 HotelsMap
A trip to the Alhambra wouldn’t be complete without seeing the Capilla Real Cathedral in the heart of Granada. Isabella and Ferdinand are buried in this beautiful cathedral, far from their birthplace. They chose Granada as their burial place because both felt that driving the Moors out of Alhambra was the most important thing they had done in their lives (all those heretics they burned at the stake didn’t count for much I suppose). If you don’t care a fig about Isabella and Ferdinand, I should mention that Capilla Real is also notable because they claim to have the arm of St. Paul in their possession (Paul must have had 4 arms though because 3 other cathedrals in Europe make the same claim). 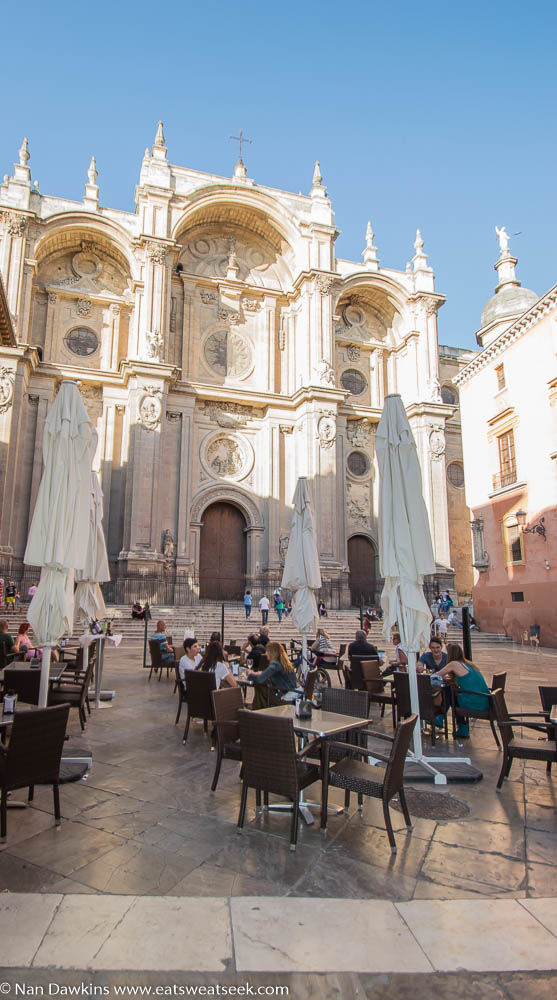 HotelsMap
Queen Isabella also spent a fair amount of time in the beautiful Reales Alcazar palace in Seville. In fact, one of my favorite gardens in the Reales Alcazar is the Princes Garden, so named because it was the garden Isabella looked out on as she gave birth to her son. Christopher Columbus was received by Isabella and Ferdinand at the Palace Alcazar when he returned from his voyage to America. His tomb and remains are located at the nearby cathedral of St Mary of the See (in Seville), which is one of the largest cathedral in Europe, with ceilings that soar 121 feet high. Its remarkable vaulted ceilings, stained glass windows, and 5 lavish naves certainly make it one of the most magnificent cathedrals in Europe. Like the Alhambra, the Reales Alcazar has been home to many monarchs (both Christians and Moors) since the 12th century. The American author, Washington Irving, captured many of the families and drama of Spain’s history in his wonderful book Stories of the Alhambra which he wrote whilst living there (he was the last person to actually live on site in Granada). A great read and wonderful background if you are planning a visit. 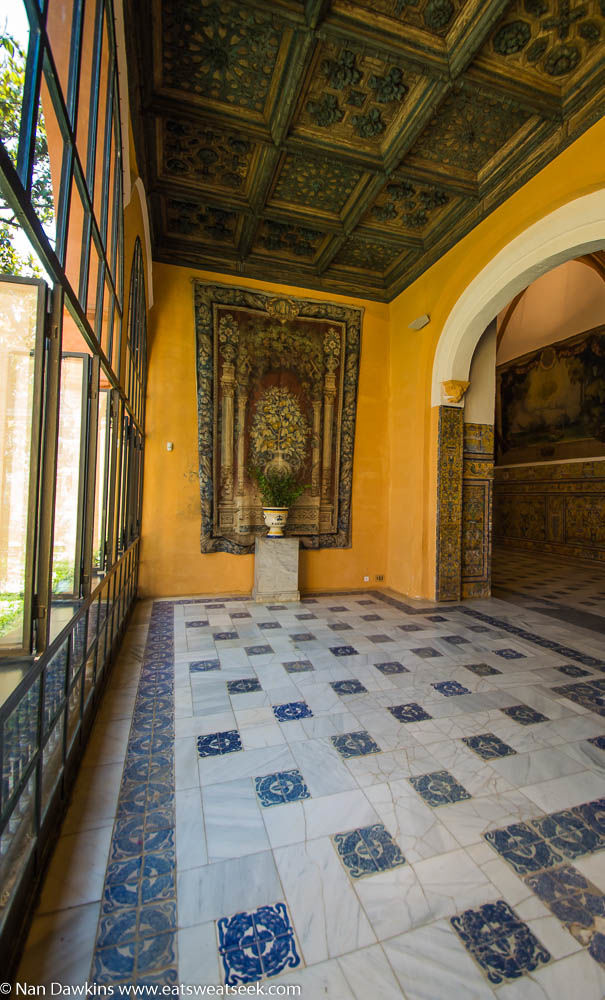 HotelsMap
Located on the A377 less than 15 minutes from Manilva, Casares is named after Julius Caesar, who used the sulphur baths nearby. Casares is also the birthplace of Blas Infante Perez de Vargas, a labor lawyer, writer and important figure in the Spanish Civil war who was executed by Franco in 1935. Casares is the most photographed village in Spain. It offers a 12th century castle, stunning views to the sea, and classic, narrow streets that are filled with bars and cafes. If you visit Casares, stop at the Hedionda Roman Baths (free) for whatever ails you. For some exercise, hike from the base of the city to the museum at the top at sunset. 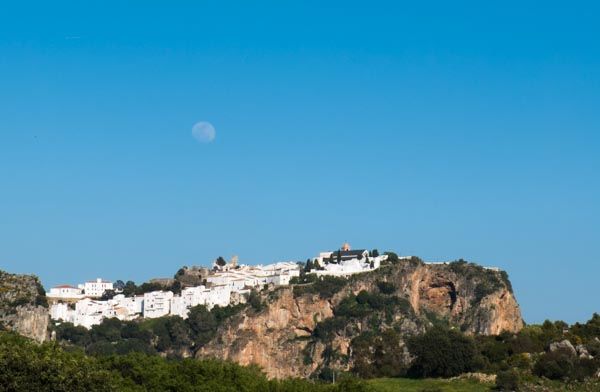 HotelsMap
Further along the A377, up the steep mountainside, lies Gaucin. Hairpin curves and sheer drops of several hundred feet next to the roadway notwithstanding, the ride up the mountain is beautiful, especially in spring. Gaucin has much to offer: Its resident castle, Castillo del Aguila, dates back to the Romans, but was expanded into a fortress by the Moors. The Convento de los Carmelitas was built in the 1700s and is now used for civic events, such as exhibitions of Gaucin’s growing artist community. Gaucin also hosts its own running of the bulls event on Easter Sunday. Unlike the throngs of tourists that descend on Pamplona for the running of the bulls, Guacin’s event is much smaller (around 40 people usually run) and it is not advertised anywhere. Guacin’s toro de cuerda dates back to the 17th century and includes many days of celebrations and processions in preparation for Easter. 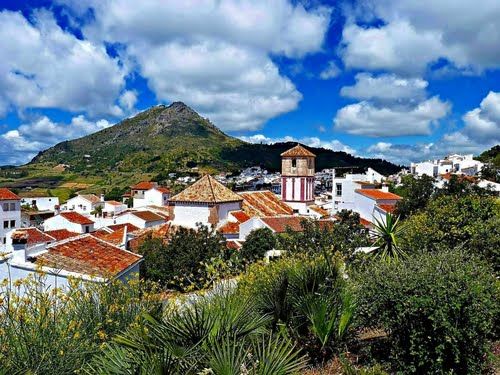 HotelsMap
Turning right out of Gaucin onto the A369 leads straight to the crown jewel of the Malaga province. Built atop a canyon that is hundreds of feet deep, Ronda’s three scenic bridges are world-famous. There are ruins of a fortress and a beautiful 16th century church, but Ronda is perhaps best known for its famous visitors. Ernest Hemingway, who spent much time in Ronda, claimed that if one were only to see a single bullfight, Ronda would be the place to do it (I’ll pass on that). Hemingway’s For Whom the Bell Tolls (about the Spanish civil war) is said to be based on the executions of Nationalists who were thrown off the hills of Ronda into the canyon below. Orson Wells, Rainer Maria Wilke and the English writer, George Eliot also spent time in the spectacular town of Ronda. Several charming hotels and B&B’s are available in Ronda, so if you have the chance, stay the night. 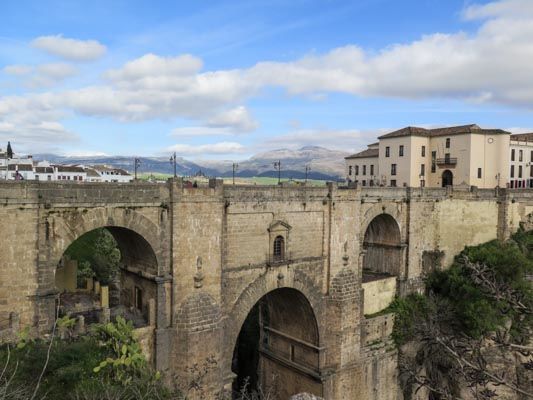 HotelsMap
The little town of Tarifa sits on the southernmost point of Spain (and thus Europe), where the Atlantic ocean meets the Mediterranean Sea. Tourists flock to its ancient city walls for two main reasons: the world-famous kite-surfing, or the ferry, which is a quick way to get to Tangiers for a day trip. Few of them probably know the historical significance of this tiny town, which has occupied its magical spot at the nexus of two oceans since 700 A.D. Tarifa has long been a place of comings and goings, of leavings and of home-comings. Just inside the city wall at the entrance to Guzman’s castle, archeologists recently unearthed a tiny chapel, where travelers and local fishermen stopped for a prayer and a blessing before setting out to destinations near and far. What more appropriate setting for Santiago, the main character in The Alchemist, to struggle with the choice he has to make for himself — to leave or to go, to give up something he has for something he wants? 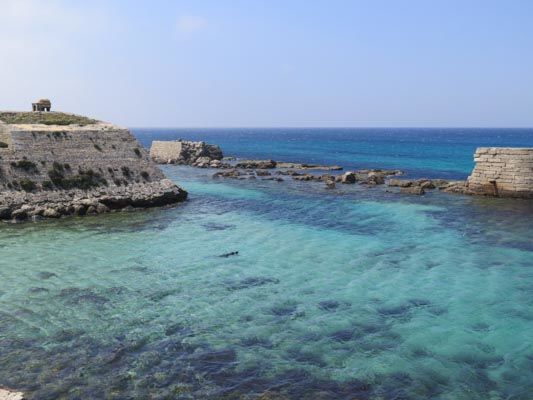 HotelsMap
Unfortunately, the Costa Del Sol is not what I remember from 20 years ago (perhaps this contributed to my recent meltdown?) and we were soon pouring over the map planning our next stop. But then I remembered something: the charming, ancient white villages that dot the countryside throughout the south of Spain. There is something haunting and fairy-tale like about these little villages. I couldn’t leave without a visit to at least one. Fortunately, three of the most interesting “pueblo blancos” in Spain lie along a stretch of the same road, heading away from Manilva toward the mountains that frame the coastline. Ronda, Casares, and Gaucin are ancient villages that trace back to before Roman times. Ruins of forts, castles and towers in these little towns attest to their significance in the distant past, but a list of notable people who walked their streets in more recent history (Hemingway, for example) suggests a magic that is timeless.
SPONSORED
Want to book a similar trip?
I accept the Terms of Use and Privacy Policy of Tripoto.
SPONSORED
Related to this article
Things to Do in Spain,Places to Stay in Spain,Places to Visit in Spain,Spain Travel Guide,Places to Stay in Europe,Places to Visit in Europe,Things to Do in Europe,Europe Travel Guide,Things to Do in Spain,Places to Stay in Spain,Places to Visit in Spain,Spain Travel Guide,
Tagged:
#Spain#Historical Places#Nature#Escapes#Europe#Spain#December#June#May#April#March#February#January#History & Architecture#city travels