No Footwear Please while climbing this hill!!! 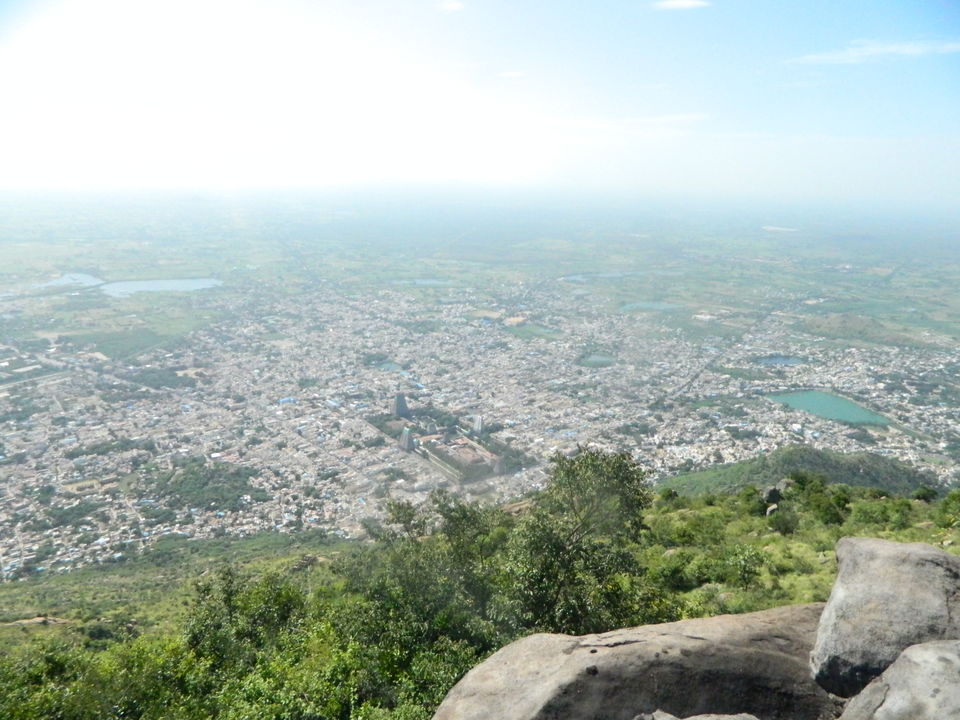 "Do thou burn up my dross, O ! Arunachala" said sage Ramana beholding the sacred Arunachala peak. He was attracted by the sheer magnetism of this holy hill and spent maximum part of his life in its lap. Considered as the manifested form of Shiva, this hill is believed to be abode of many sages and saints who are lost in deep meditation in its slopes, perhaps in their invisible forms.

Starting from Bengaluru by train, Tiruvannamalai is an overnight journey, deep in the hinterland of Tamil nadu. This place is famous for the Arunachaleswara temple and also is the abode of sage Ramana, one of the greatest sages of 2oth century.

Reaching Tiruvannamalai in the wee hours of the morning, we were awed by the silhouette of this sacred hill filling the canvas of this holy temple town. It looked like this legendary hill was inviting us with open arms. One can't miss the presence of Arunachala in every aspect of life in this town. 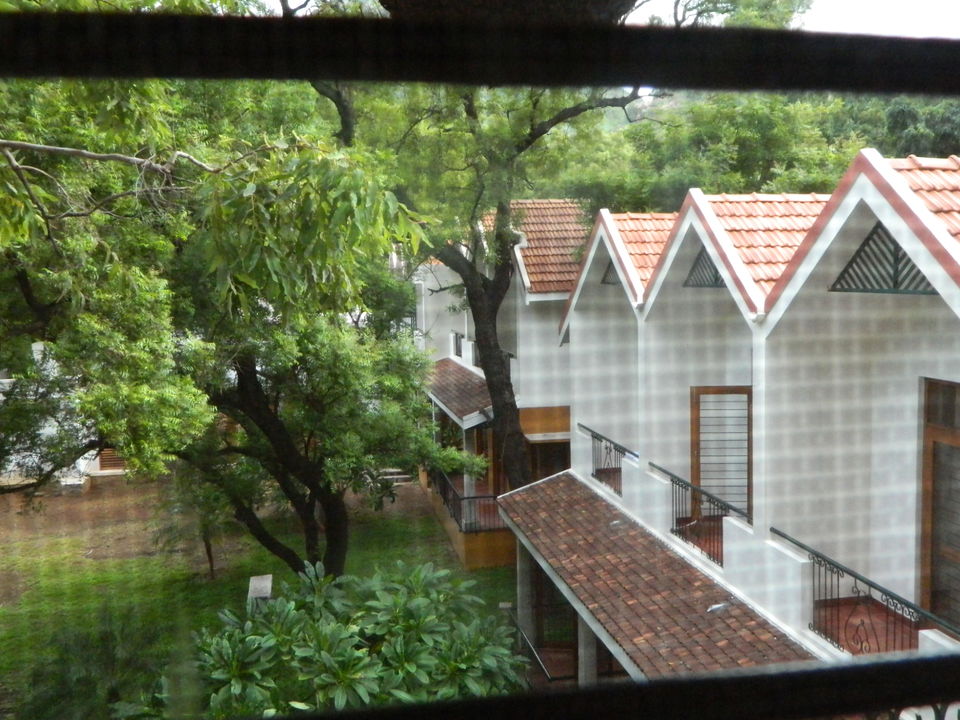 We were put up in the serene and ethereal Ramana Ashram. This is where Ramana Maharishi spent maximum part of his life at the foot of this sacred hill. He used to call this hill as His heavenly father. When I stepped into His humble abode, I was stuck by the tranquility of this place. We were provided a simple and serene cottage for the night stay. The ubiquitous conical summit captured my thoughts. Can we actually go and scale it? 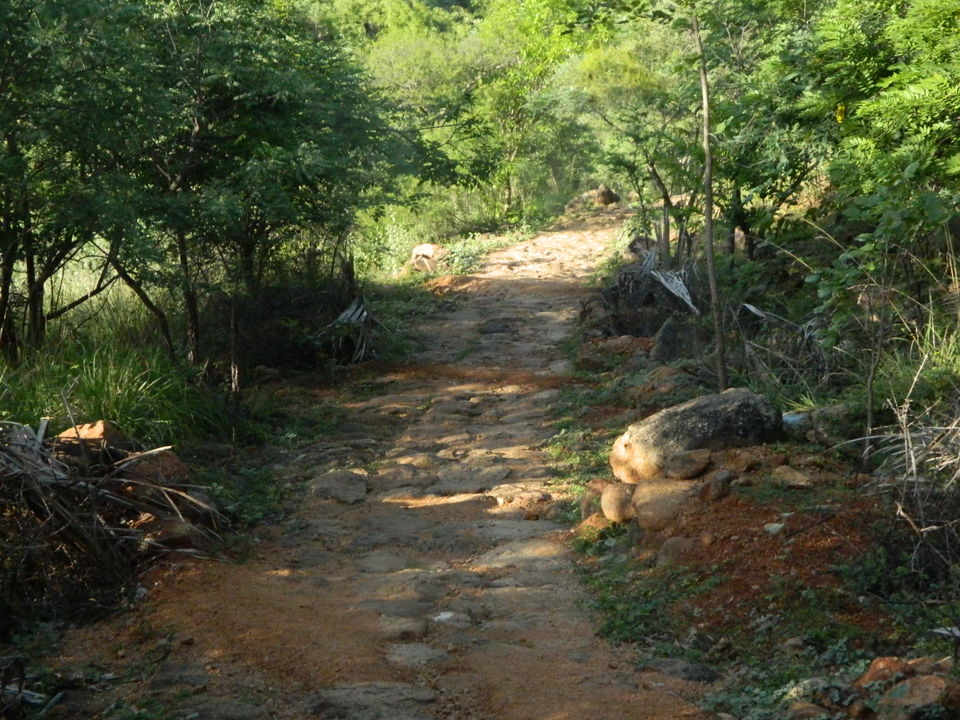 We got our answer from a chirpy youngster, short in height and high on enthusiasm sporting three horizontal lines of holy ash on his brow- "You can climb it sir but NO FOOTWEAR PLEASE." He quickly added, " You see!!! This is not a hill but manifested form of lord Shiva so out of reverence we don't use footwear." What a noble thought!!!

We found him near Skanda ashram. Skanda ashram was the abode of sage Ramana from 1916-1922 on the Eastern slope of this hill. Skanda ashram is at a distance of 2 kms from the back gate of Ramana Ashram. 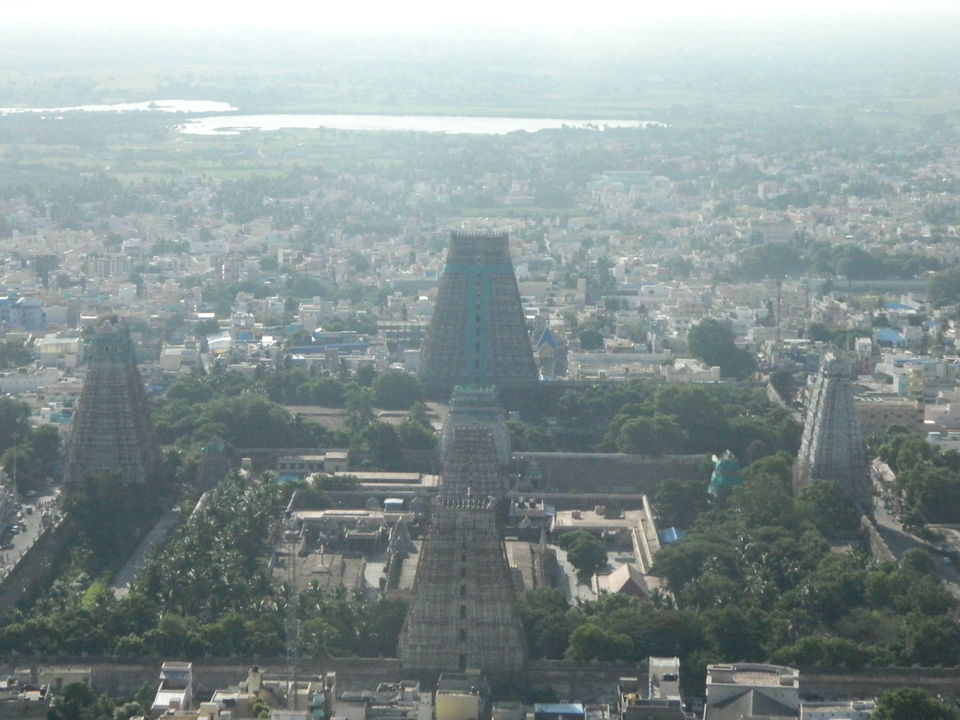 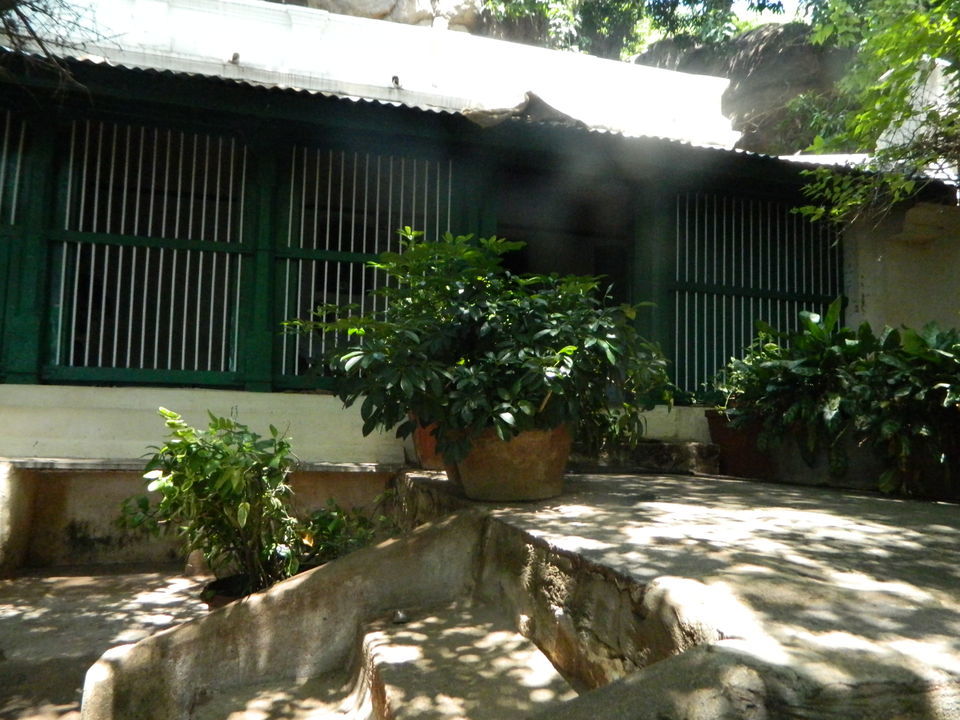 The hill was a mix of stone and gravel with no proper path. But we were ready for this unique and challenging trek.

The summit of the hill celebrates the sacred festival of Karthika deepam every year during the full moon of Karthika month which comes generally in October- November. Tonnes of Ghee and cotton are burnt on this day on its summit symbolizing the final illumination. This sacred flame burns for days together and can be witnessed from miles away, inspiring and prodding the seekers to follow the path of spiritual illumination.

View of the Tiruvannamalai town and the temple from Skanda Ashram 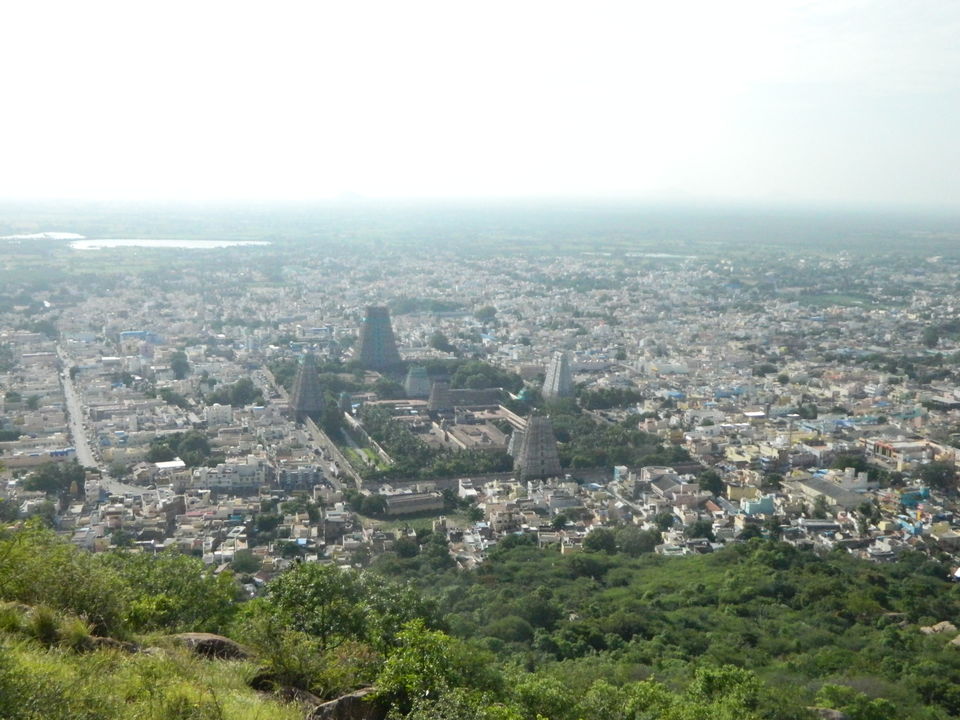 When we started the trek we realized that very few venture to actually scale this peak as there is no proper path to reach its summit. One has to tread on rocks of all sizes and shapes and negotiate through bushes and shrubs. As it was the month of August, the available cloud cover was a blessing for us. The trek should be started as early as possible in the day to dodge the heat of late morning. We set out on our trek following some arrows made with white paint on the big boulders on the way. Of course, our young and energetic guide was there as a constant companion. After a tedious trek for around 1 hour, we reached the summit.

Just before the summit 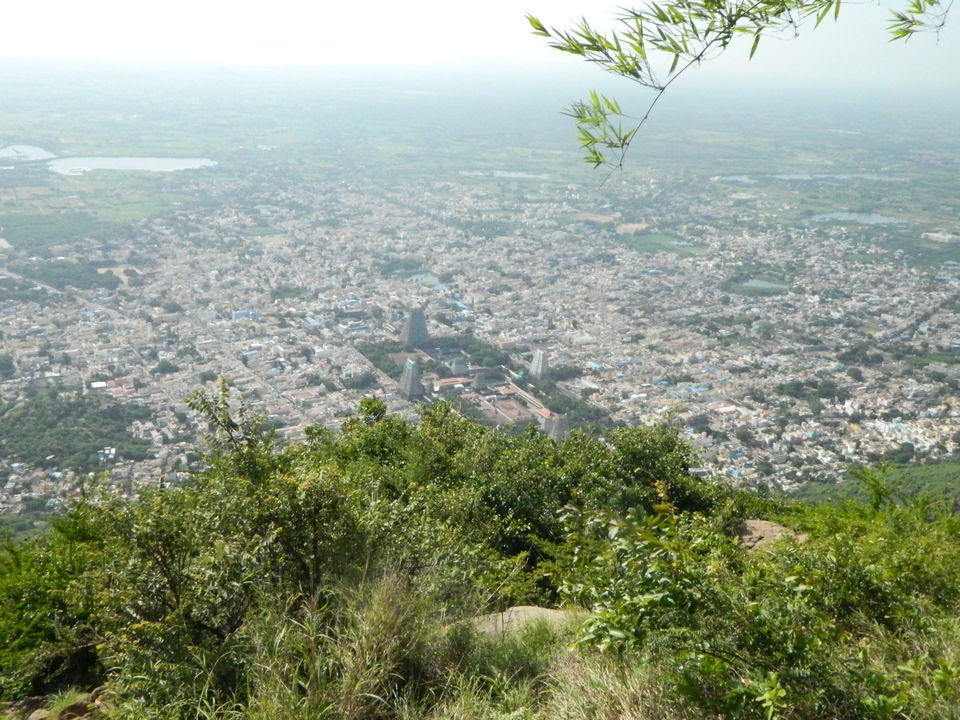 Arunachaleswara Temple from the summit of Arunachala hill 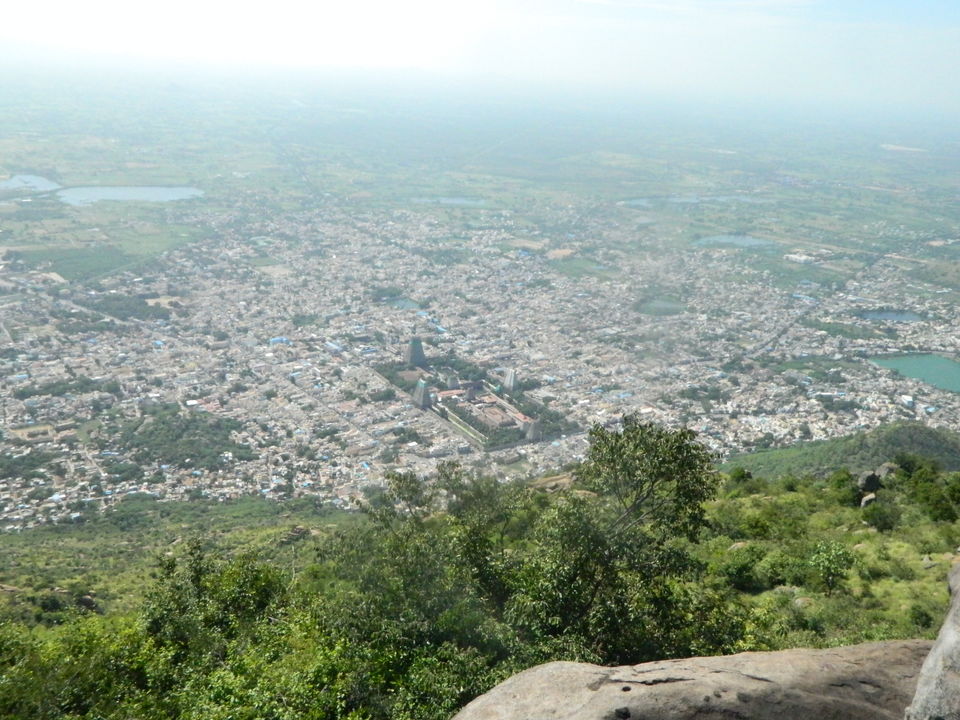 The breathtaking view of the temple town and the majestic temple complex made us forget our exhaustion. We sat in silent meditation for some time with the wind doing all the talking. Our guide accosted us, "Please start quickly it is just one and half hours to noon. The stones will scorch you bare feet if you delay in trekking down. " Bowing down to the sacred summit and gathering some soot of that sacred deepam, we promptly trekked down with measured steps.

Summit of Arunachala where the sacred Deepam is lit 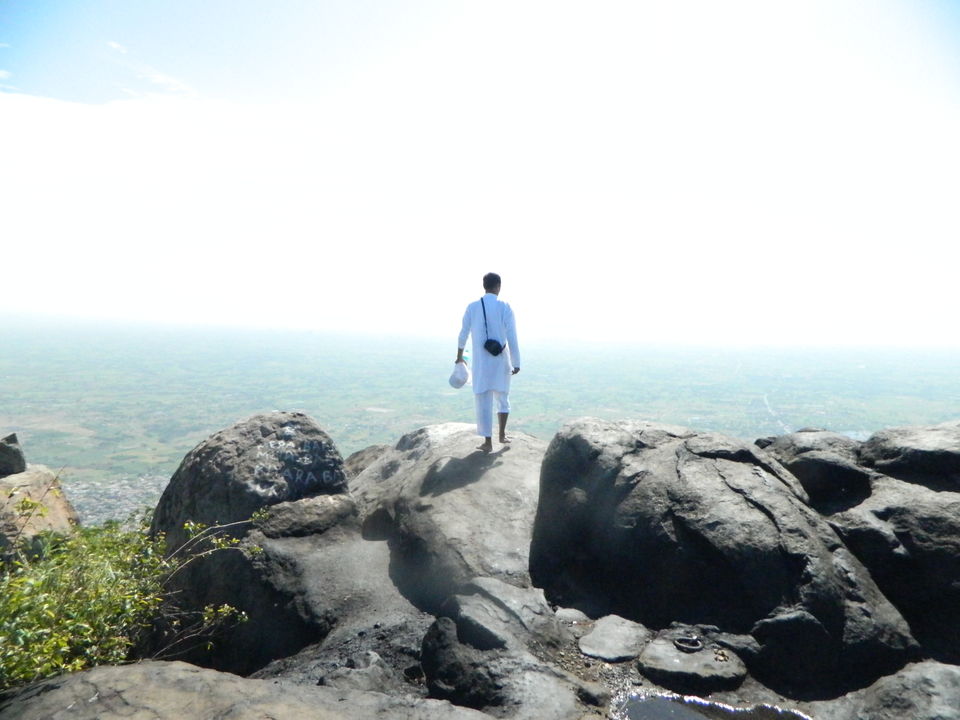 On our way down, we did a small detour at the foot of the hill to the Virupaksha cave, the second abode of the sage of Arunachala for seventeen years from 1899-1916. A visit to the cave and spending some time in solitude energized us.

Best time to travel- September to February, trekking enthusiasts should start just before daybreak to avoid the heat when coming down. One can write nearly a month in advance to get accommodation in Ramana ashram which is totally free of cost including the delicious food which they serve thrice daily. One has to email to stay@sriramanamaharshi.org with their stay details.