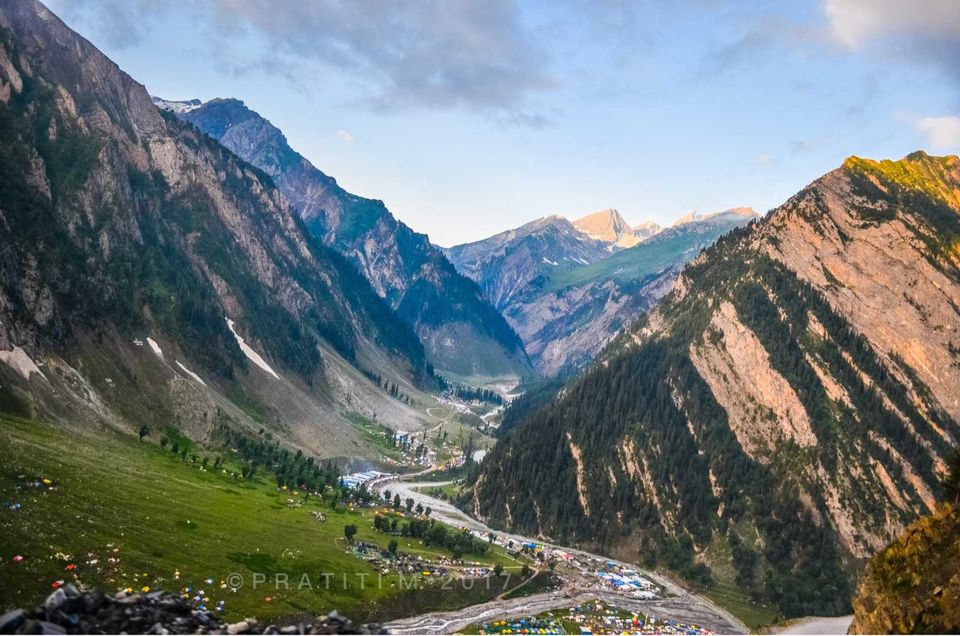 After spending a night full of intolerable stomach aches & upsets, all of us except my school buddy; yes, because he had a paneer meal as dinner while the rest of us - the greedy ones, had a chicken meal as our dinner. The ordeal started at around 3 am and continued till 4 o'clock, and we were supposed to leave sharp at 5 am to avoid the traffic that usually occurs at Zoji-La due to wretched road conditions after the thawing of the snow. So after flushing out the disastrous nutrition we had the previous night, we got ready to leave our hotel and commence our next leg of the whole trip - Ladakh. Our driver took us along the precarious winding highway while we enjoyed some truly breathtaking landscapes. 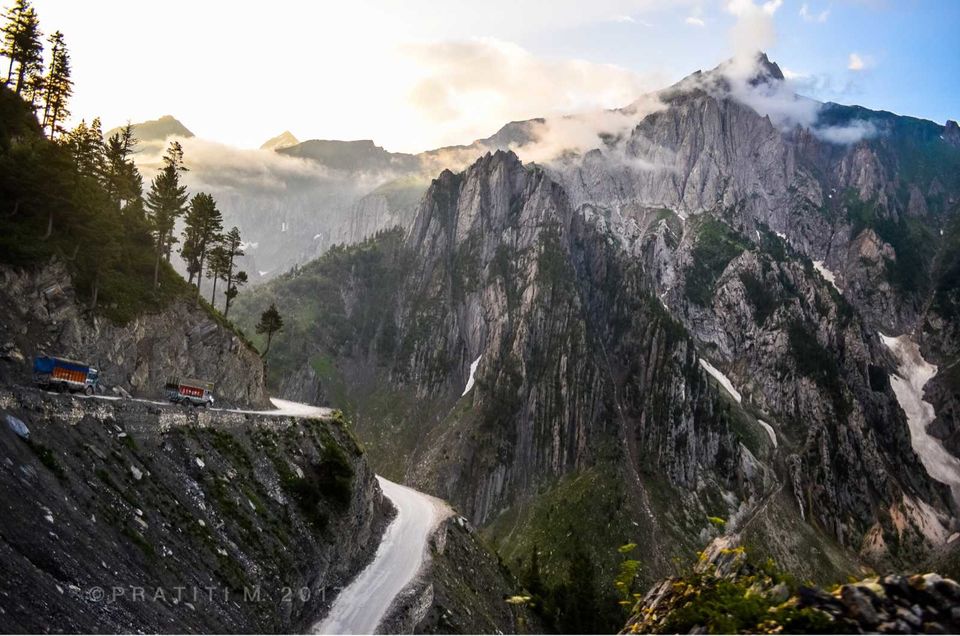 The view from Zoji-La just took our breath away, the view of Amarnath Yatra base camp at Baltal.

Amarnath Yatra base camp at Baltal

Yes, that is the magnificent view. Lord Shiva had been kind enough to us for providing us with such good weather conditions, so that we can enjoy the marvels of Mother Earth and the Almighty. I had completely forgotten that all the while we were riding along the great River Indus, about which I had only studies in history textbooks in school.

The first rays of the sun & the mighty Indus River 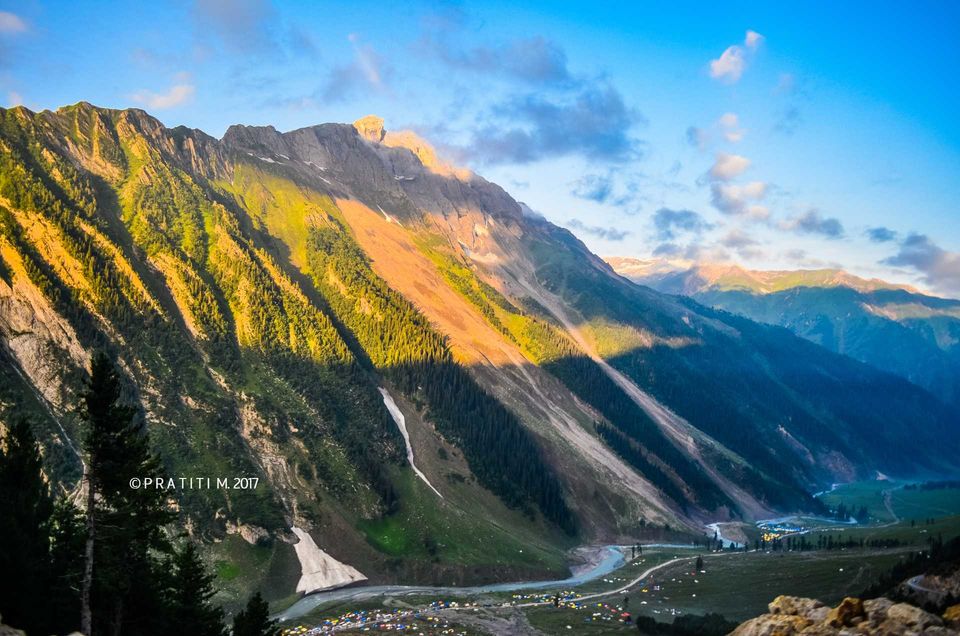 One can have a look at the slope angle of the Zoji-La pass and one can very well imagine what would happen if one is not careful enough while crossing this pass- which is considered one of the most dangerous passes in the world. It is also recommended to indulge in some high altitude medicines if one is feeling dizzy or not well or have breathlessness. Since there is a sharp increase in altitude as one crosses from Sonamarg (Kashmir) to Kargil (Ladakh), one may face such health issues. But please don't be alarmed as these are not very serious. Always please consult your doctor before setting out on high altitude journeys like this. 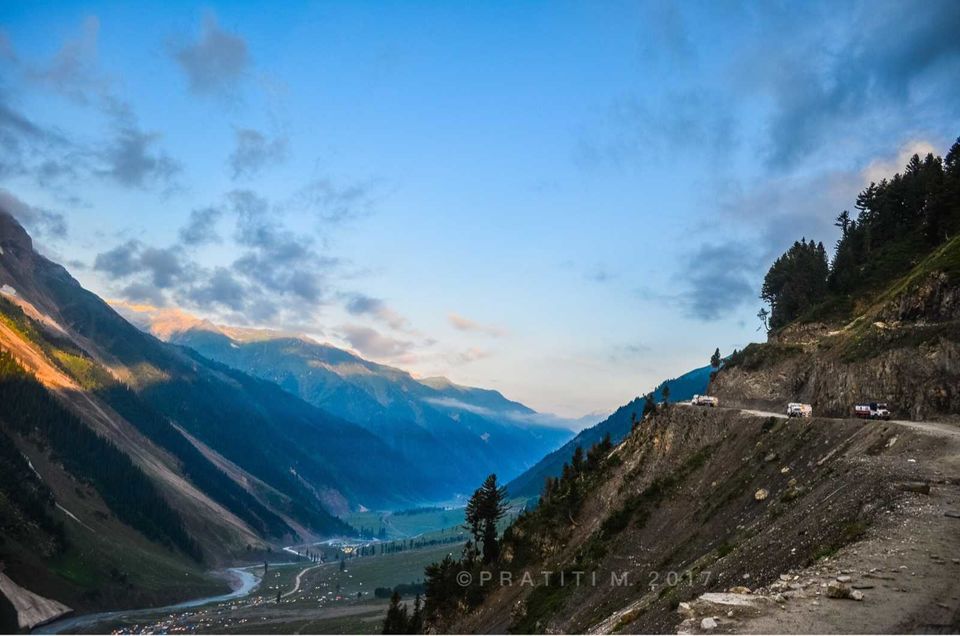 Crossing Zoji La made us realize how tirelessly our defense personnel carry out their work in the service of our country. 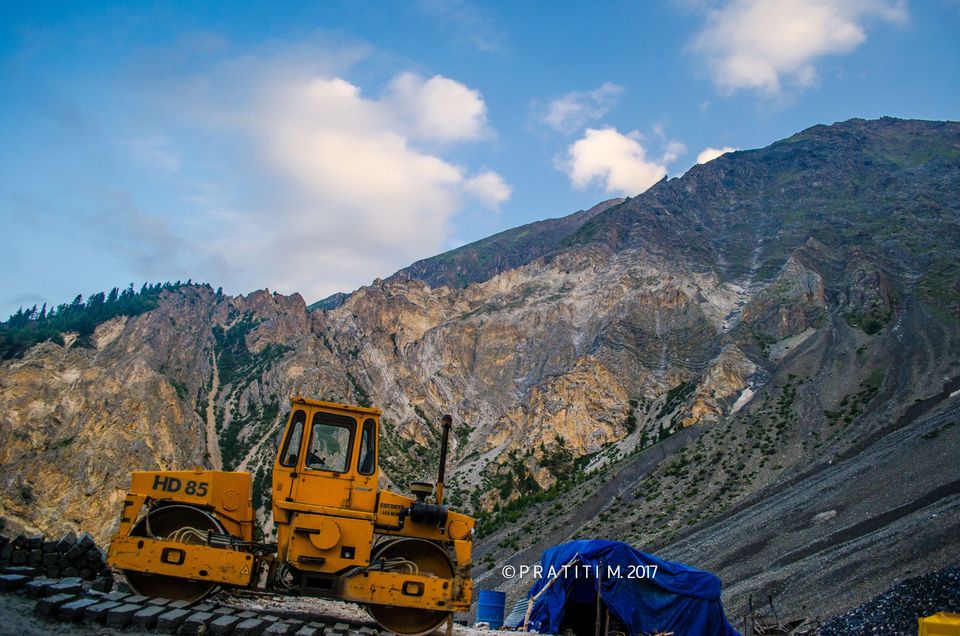 We could see BRO (Border Roads Organization) personnel relentlessly working to build the road where it had been washed away by glacial water making enormous potholes which are extremely dangerous for small vehicles, as they have an increased probability of toppling over due to imbalance. 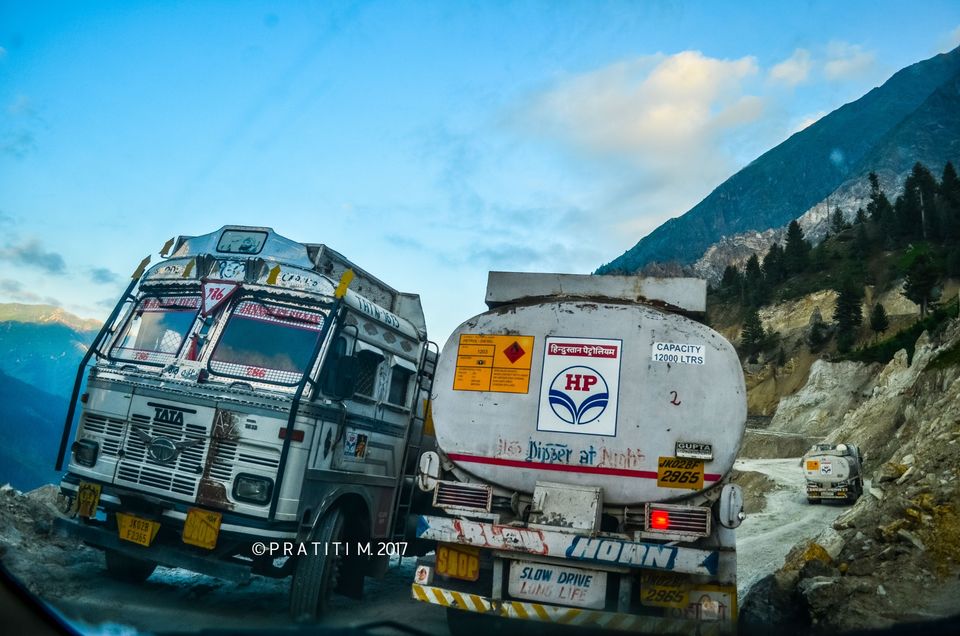 Whenever our car came close to a melting glacier, we could feel the immediate drop in temperature and the "geological studies" regarding "erosional activities of glaciers" back in my college days came rushing into my mind. 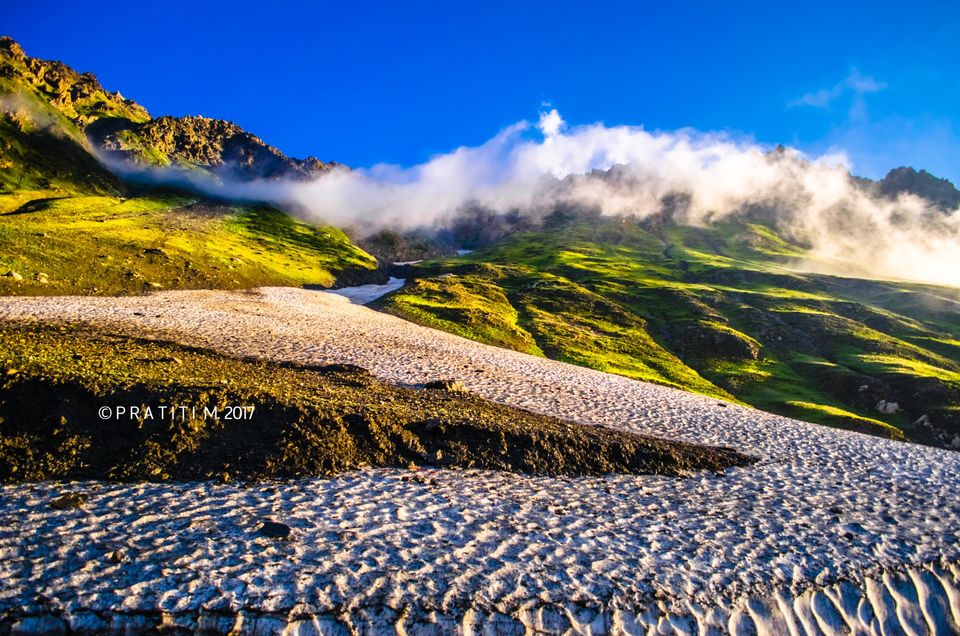 All of us couldn't keep ourselves & our cameras calm, we were just popping out of our car window here & there with our fingers glued to the shutter button. My fingers nearly froze due to near 0 deg temperatures but I wouldn't care as long as my camera was happy.

I woke up earliest to get the front seat :P 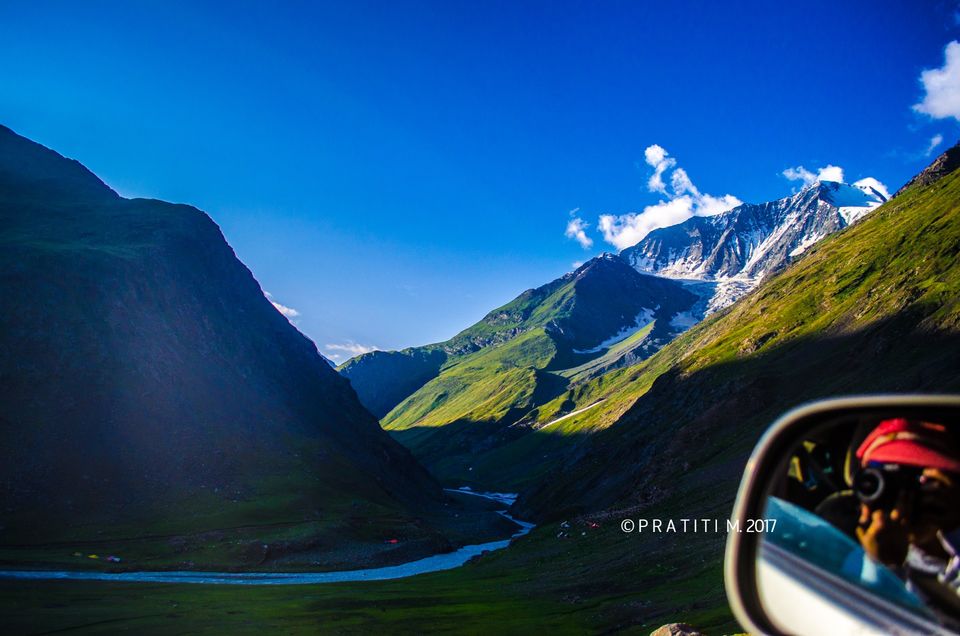 After crossing Zoji La, we were welcomed by such a mesmerizing vision which just took our breath away. The immediate temperature drop and increased ruggedness of the landscape implied that we have entered the Ladakh territory. We were thrilled beyond our wildest dreams that at last we have entered the famed Ladakh region which have been shooting locations of many famous Bollywood movies like Bhaag Milkha Bhaag, 3 Idiots, Jab Tak Hain Jaan (I know I am being too filmy here :P). 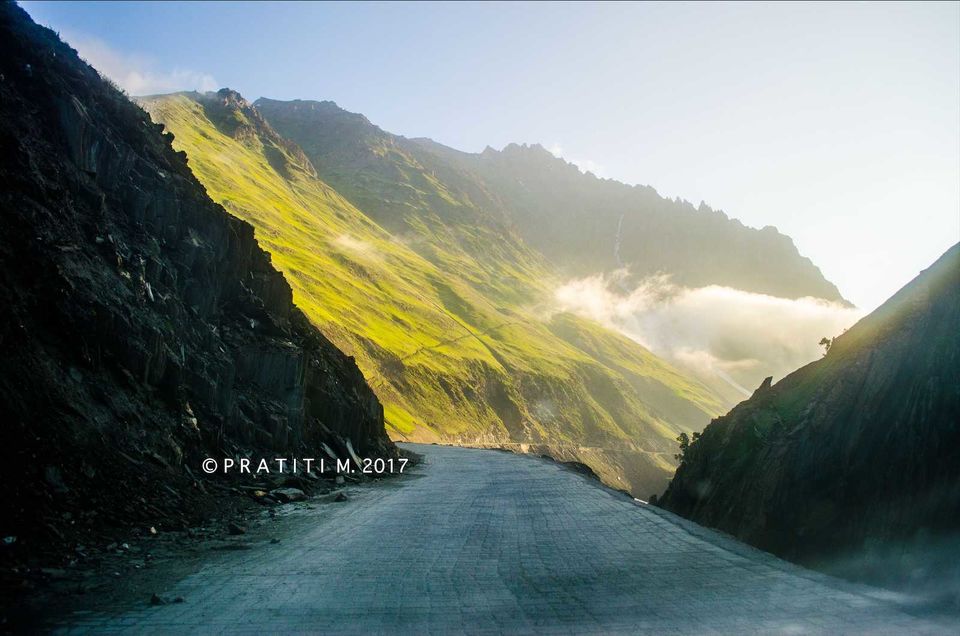 We drove across some stunning terrains, awestruck at the little piece of knowledge sharing done by our driver about the proximity of LOC and our neighboring country Pakistan just across some of the mountain ranges. The tough weathers & remoteness of the locale is manifested in scarcity of population except the Indian Army. 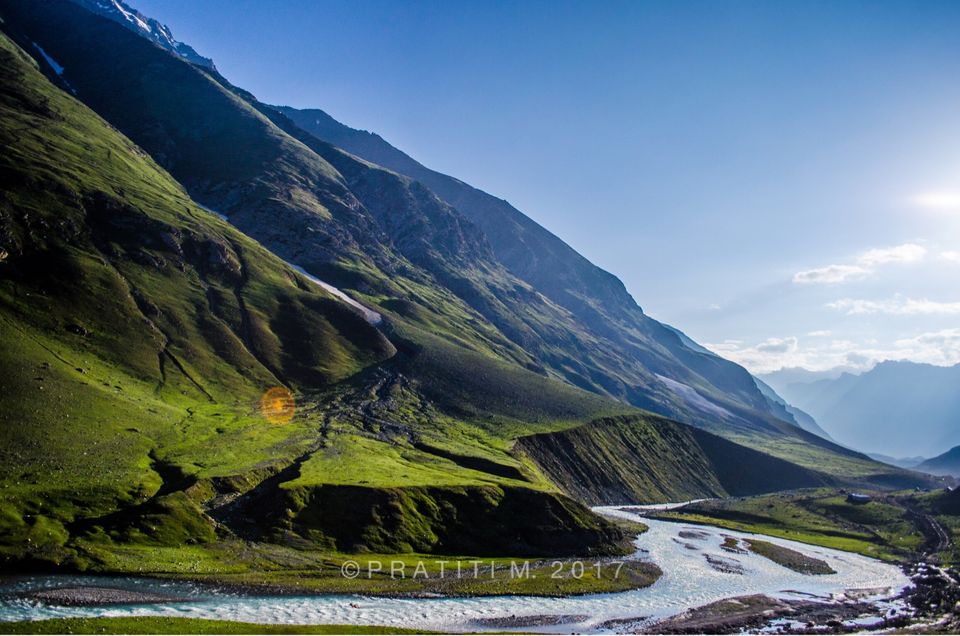 So as per our driver, the valley (where River Indus bifurcates & starts flowing towards the right) leads to our neighboring country. 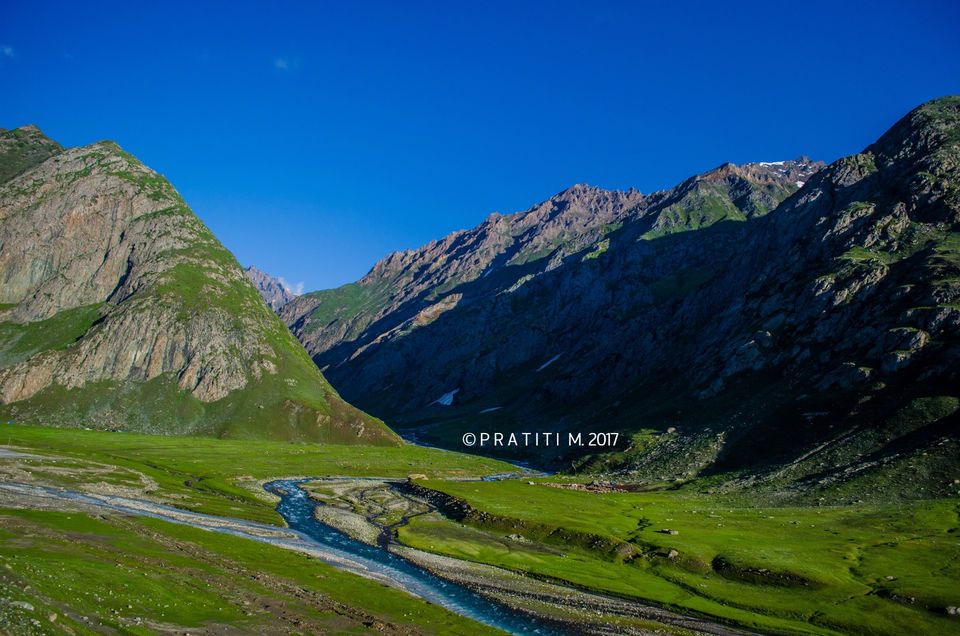 We entered the Drass region of the Himalayan range, which is the second coldest place on earth after Siberia & the coldest place in India with temperatures dropping to as low as -60 deg C, where our fearless Indian army defy such sub-zero temperatures to protect our motherland. All along the journey, our driver continued to provide snippets of general knowledge regarding the area, the living conditions of the local Kashmiri citizens, the hardships faced by them daily. We couldn't do much except wonder how would we have survived if we had been born in such remote locations instead of the usual cities? The brazen temperatures, the continuous unrest, scarcity of food supplies and daily needs stockpiles are some of the few roadblocks which the locals face everyday. 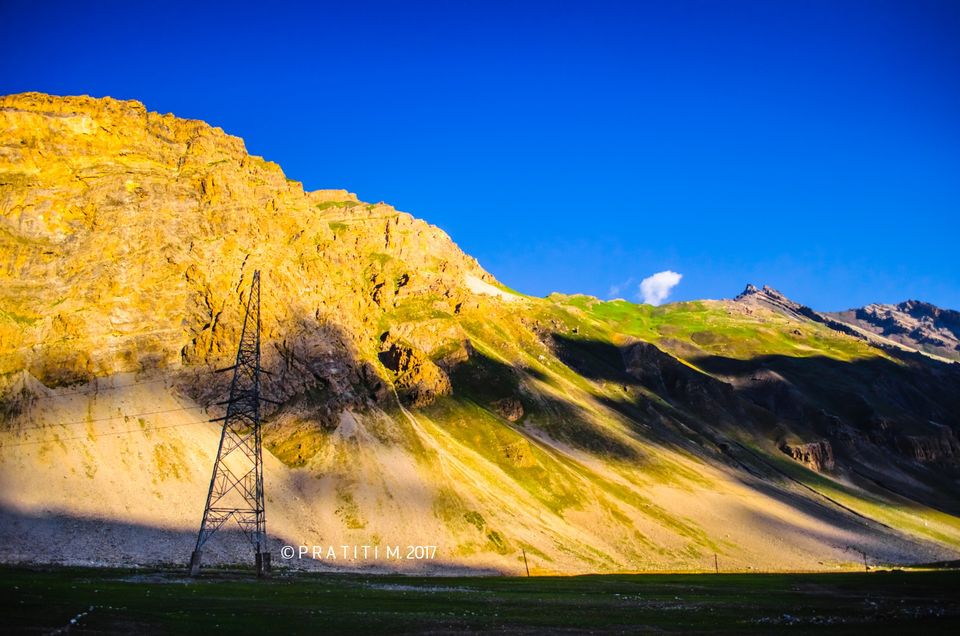 Although we didn't agree much with our driver on his views of what should be done regarding the plight of the locals, but if one keeps a totally neutral mind and imagines himself/herself in the condition of the people there, I'm sure one would feel what they are going through. Dirty truth be told, it is really nobody's fault except the Big Daddies.

Well, we are in no position to "decide" who really are at fault because pawns die first when empires are at war - collateral damage, as one may call it.

BRO JCB's which we wanted to avoid 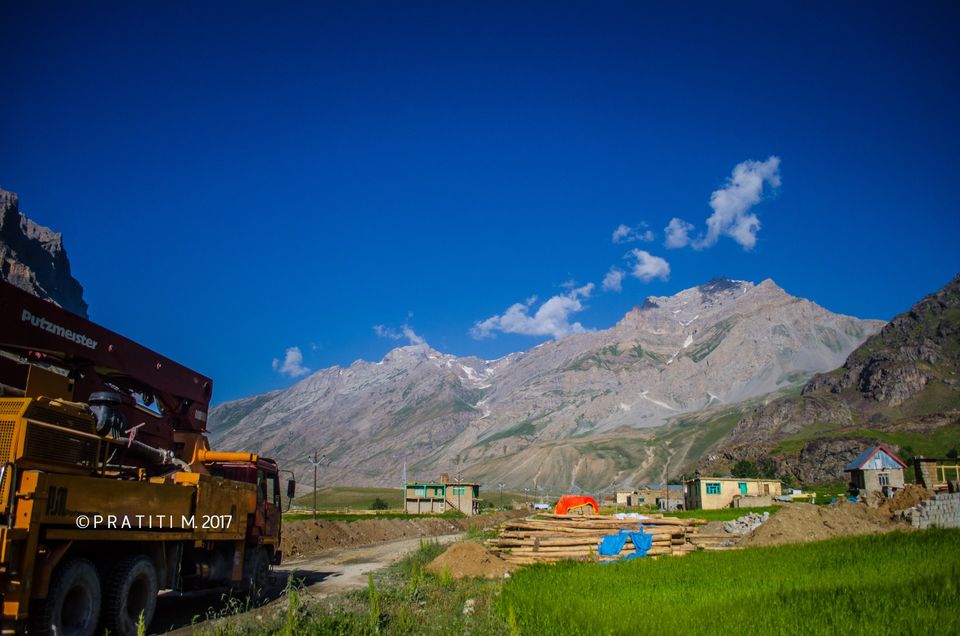 We crossed some astounding topographies and reached Kargil War Memorial finally. At one point of time, we were stuck between the Indian Army convoy & BRO JCB's for nearly 45 minutes which, as per our driver was nothing. Usually the halt takes up more than 3-4 hours if one gets stuck. So leaving Sonamarg at 5 am bore fruit. We paid the entrance fees and finally entered Kargil War Memorial - the place sent shivers down my spine and gave me goosebumps. The very thought of the Kargil War and how our valiant Indian Army laid down their lives for us - this place actually gave the feel of the hardships faced by our men. Our enemy was always at favorable situations owing to altitude of the surrounding mountain ranges. The letters, the recordings of the dauntless Indian Army describing their ordeal during the war are indescribable. 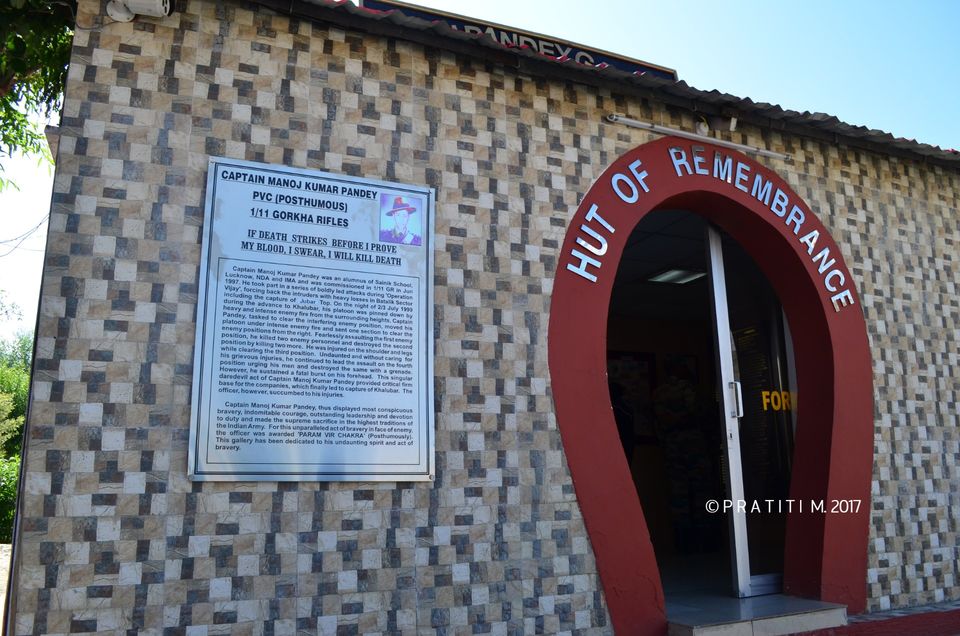 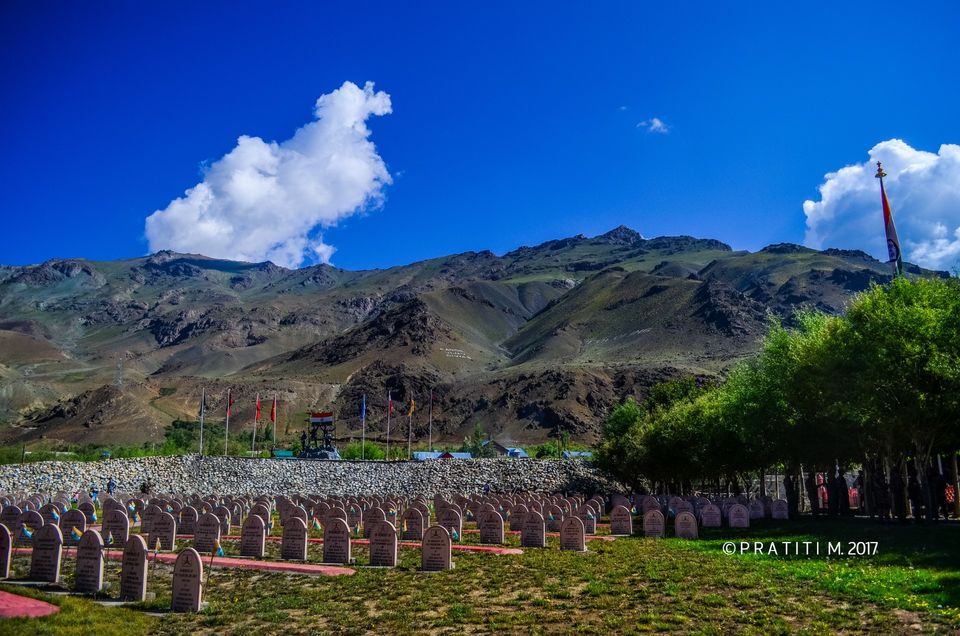 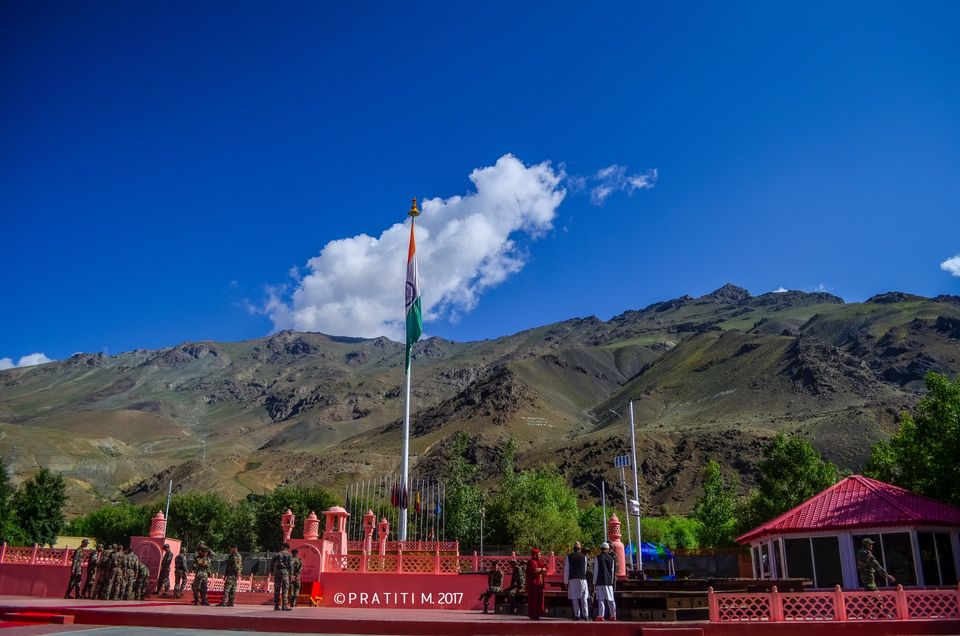 After such an enthralling visit to Kargil War Memorial, we were super-charged up and all of us finally came out of the lethargy which had engulfed us since 5 am ever since we left Sonamarg, and we got our topic of discussion till our journey to Kargil town. 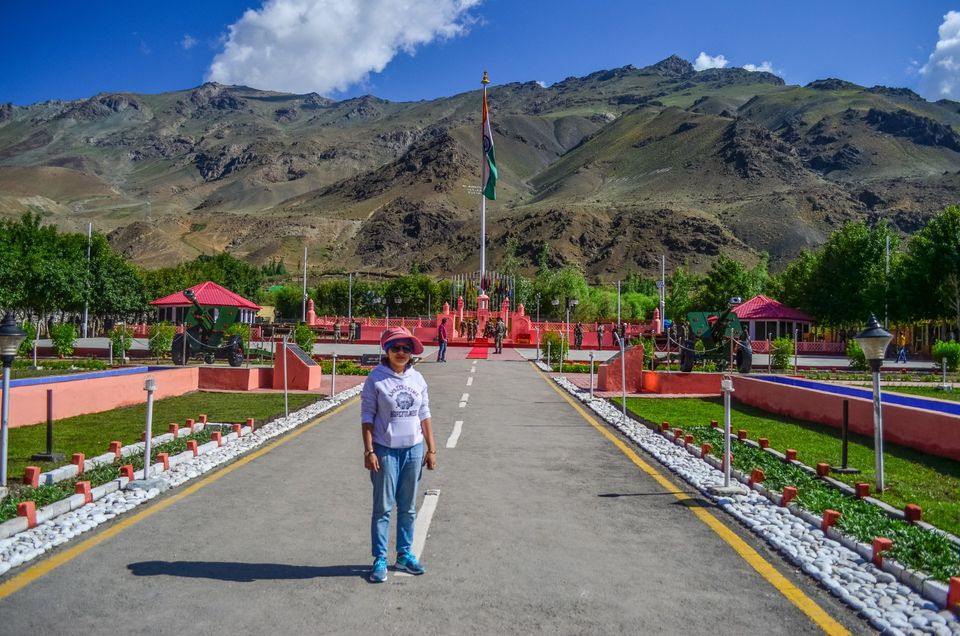