On 1st October 2021 at 8 AM we headed towards Kanchipuram from Sripuram, Vellore. Distance is approx 70 km. It was Friday.  We reached Kanchipuram at 9.30 AM. We directly went to Ekambareswara temple but after reaching we were told that all temples in Kanchi would be closed for 3 days.  Actually we planned to visit 5 temples and move to Mahabalipuram.  We get disappointed but then decided to stay in Kanchipuram for 3 days.  We stayed at M M Hotels, which is 0.5 km away from bus stand and 1.5 km away from railway station. As we have to spend 3 days doing nothing, we rested on Friday and on Saturday, Sunday, we done some saree shopping on Gandhi road at Prakash saree center. Went by auto- to and fro Rs. 120/-.  3rd October is my Mummy's birthday, we brought cake from nearby shop, decorated room, went for lunch in a north Indian restaurant named SaiSangeet, as we were fed up eating south Indian food from last 2 months and celebrated birthday.
On 4th October morning 7.30 we stepped out hotel and decided one autowala, who will take us to 5 temples and then drop at M M hotels at Rs 400/- . Like Madurai here in Kanchipuram also there are too many rickshawalas, who are the agents of saree shops. They trouble you so much.
Auto driver first took us to 1) Sri Kamakshi Amman Temple. Temple is well maintained and pleasant. It is one of the holy temples of Hindu's. There was a queue and we had to wait half an hour for darshan. You can take mobiles with you but on silent mode and can't take photos. In 1) meenakshi temple, Madurai 2) Ramnathswami temple, Rameshwar 3) Sri Laxmi Narayani golden temple, Sripuram .. you have to deposit mobile phones and cameras at the entry gate only.
The Idol of the Goddess Kamakshi, is seated in Padmasana, a yogic posture signifying peace and prosperity.   Kanchipuram is a traditional city that has hundreds of traditional temples but this is the only Goddess temple in the city. The main tower over the vimanam is gold plated. We had a good darshan. After we headed towards 2) Ulakalanda Perumal temple - which was just 5 minutes walking from Kamakshi Amman Temple.  This temple is constructed in Dravidian style of architecture and  is dedicated to lord Vishnu in form of Vaman which is one of the dashavatar. A very ancient must visit temple.  Huge size Vishnu (Vaman) with his left leg raised up to indicate his one step has measured the sky.  Two fingers in the left hand are pointing that two steps are over.  After darshan we went to 3) Ekambareswar Temple - Ekambareswar means Eka Aam, a mango tree which is at the centre of the temple and it is over 3500 years old with four branches, which represents four Vedas. A very oldest big Shiva temple. Beautiful architecture but should be maintained neatly.  The temple complex covers 25 acres, and is one of the largest in India. It houses four gateway towers known as gopurams. The tallest is the southern tower, with 11 stories and makes it one of the tallest temple towers in India. The temple has numerous shrines, with those of Ekambareswarar and Nilathingal Thundam Perumal being the most prominent. The temple complex houses many halls; the most notable is the thousand-pillared hall. Then we went to 4) Kailashnathar Temple. Temple is dedicated to Lord Shiva, Built up with Dravidian style of architecture, it is one of the oldest surviving monuments in Kanchipuram. The Kailasanathar temple is notable for its intricately carved galaxy of Hindu art in the late 7th- and early 8th–century Tamil tradition. The structure contains 58 small shrines which are dedicated to various forms of Shiva. The temple is one of the main tourist attractions of the city. It is a superb temple.  From last 2 months we are visiting south Indian temples, but the architecture of this temple looks quite different. But I think Government should take care to protect this monument. The temple is just 2 km away from bus stand.
Then we headed to 5) Varadraja temple which is 6 km away from Kailashnathar Temple. Varadraja Perumal temple is dedicated to lord Vishnu.  As there are many famous Vishnu Temples in Kanchipuram, Kanchipuram is also known as Vishnu Kanchi. Lord Varadraja is huge in size with four hands holding shankh, chakra etc and richly decorated with costly jewels. The temple is the sculptures of two lizards carved on ceiling, one covered with gold and other with silver sheet. The most famous reason to visit this temple is touching the lizards. Entry fee Rs.3/-  Here also we had to wait half an hour as there was a queue. There are 2 stories about this lizards. It is said that if you touch these lizards your sins will be gone.  Varadraja temple complex, there is 100 pillars hall, kalyan Mandapam entry fee is Rs.2/-  ( where superb stone carvings on pillers), teertham tank, PerunDevi Thayaar (Laxmi) temple. When we were coming out of the temple heavy rainfall started, but as autowala waiting outside the temple we saved us from getting wet, he dropped us near M M Hotels, we had lunch nearby and decided to stay at same hotel because heavy rainfall. 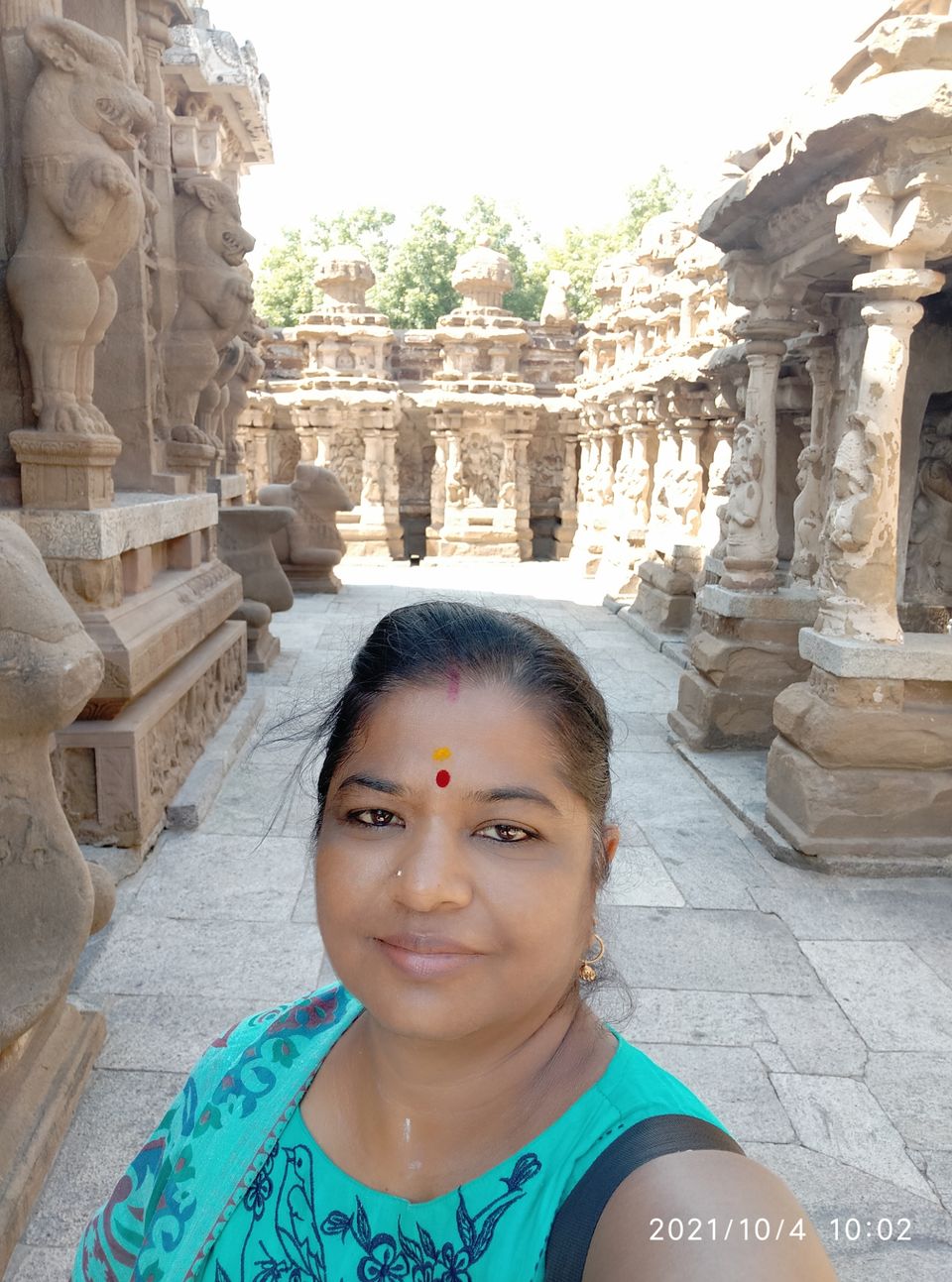 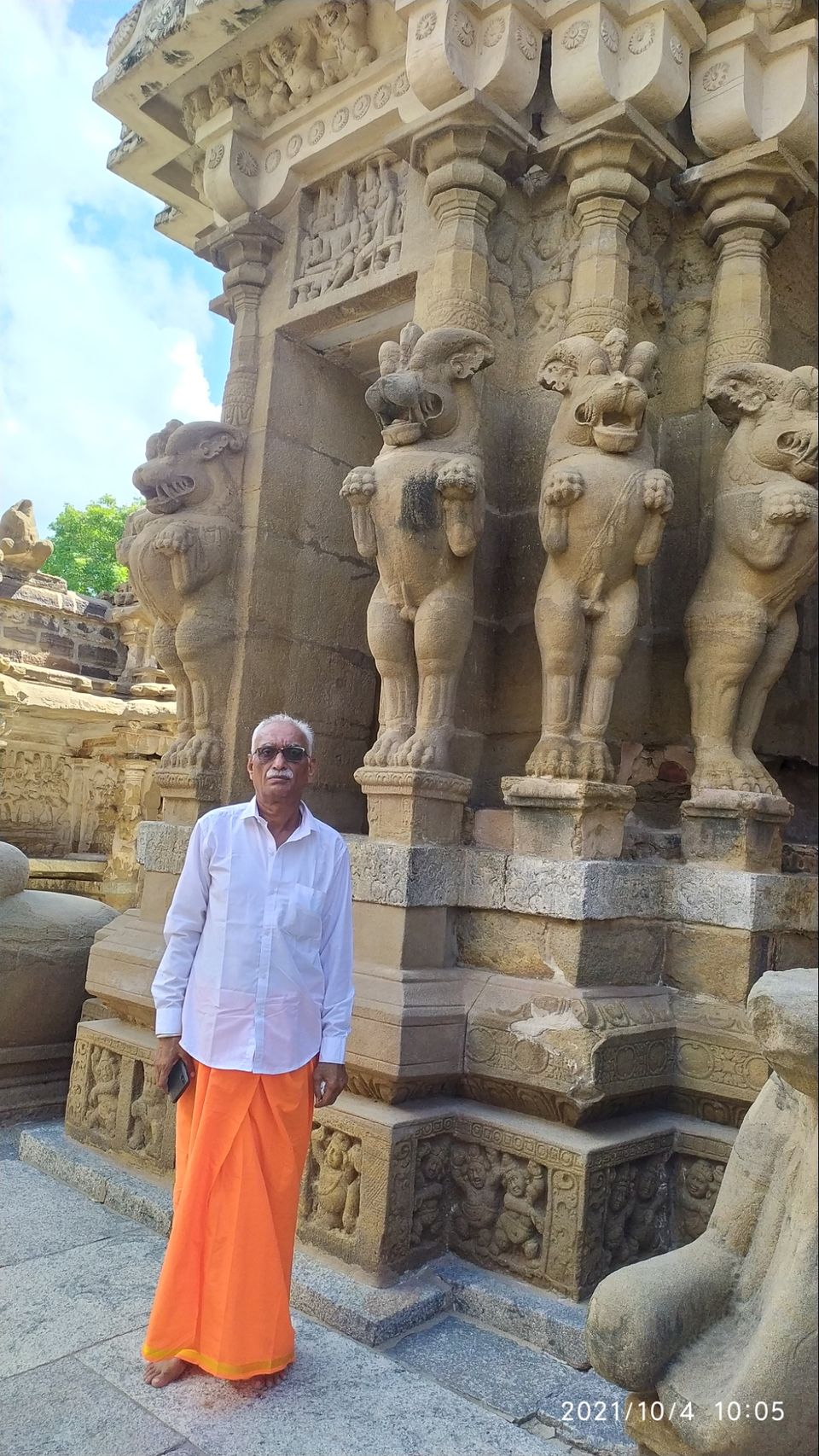 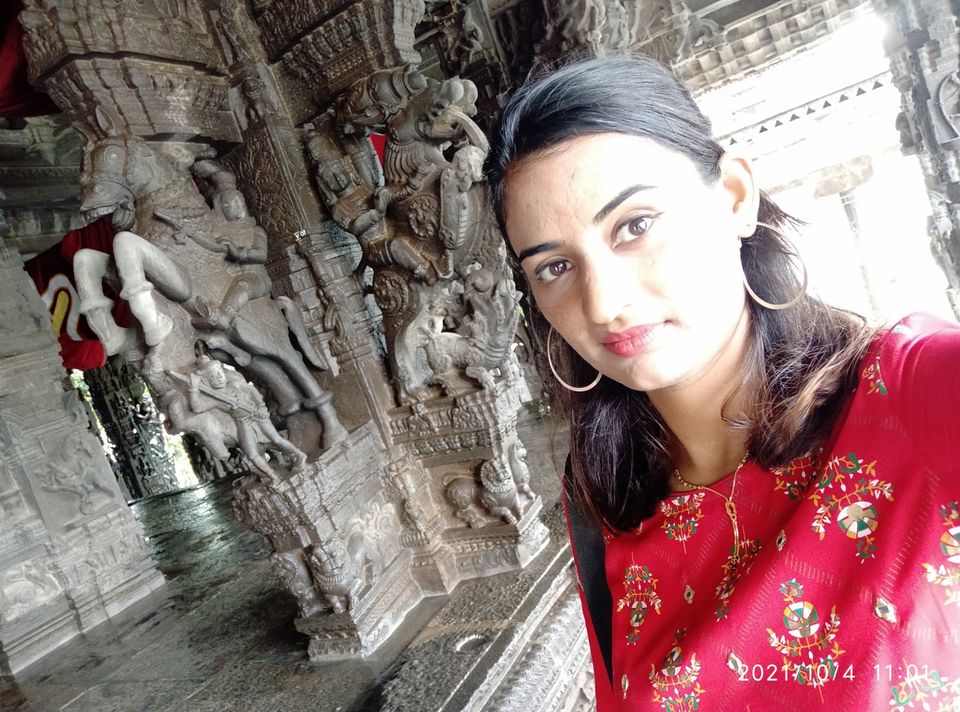 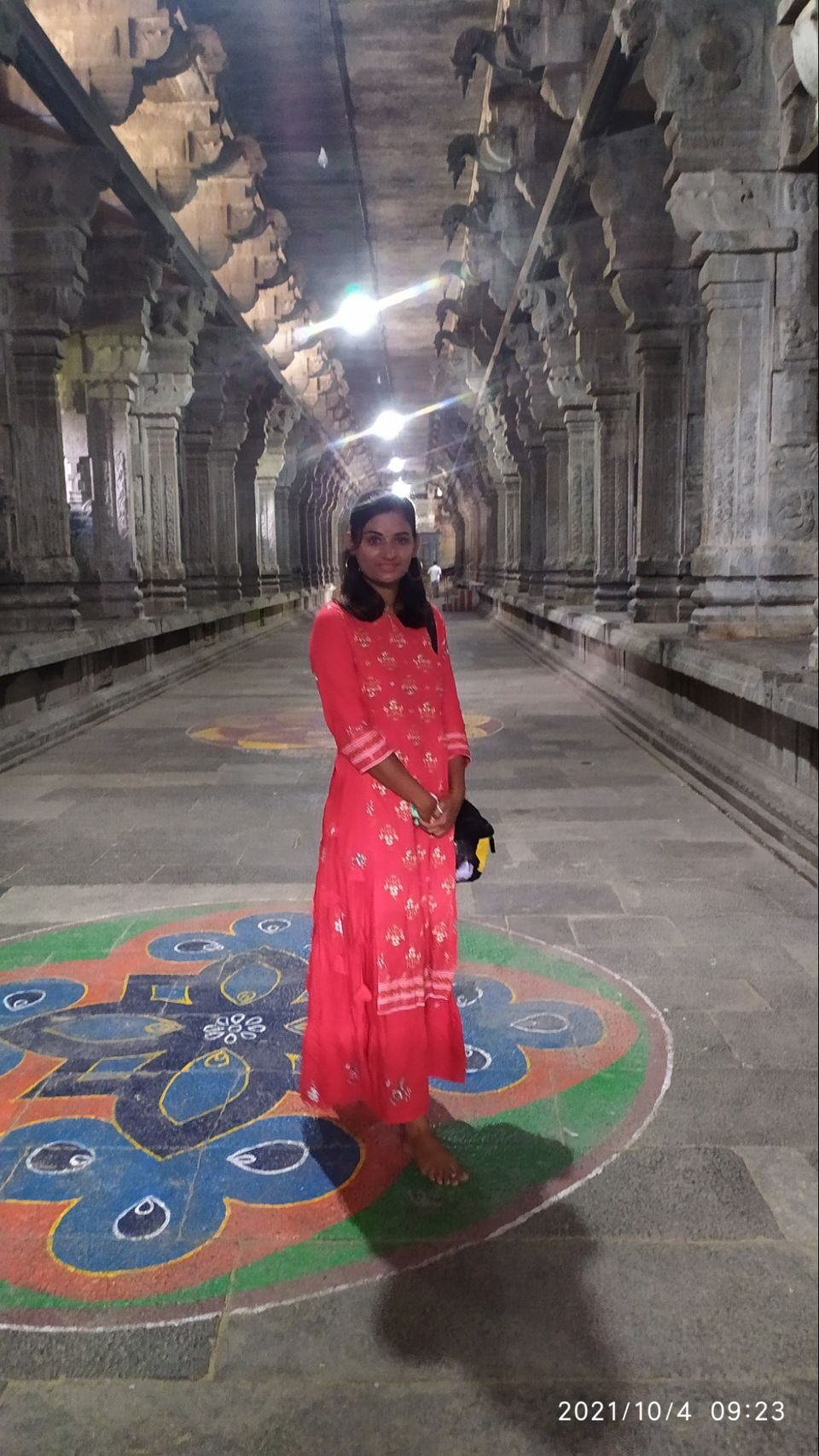 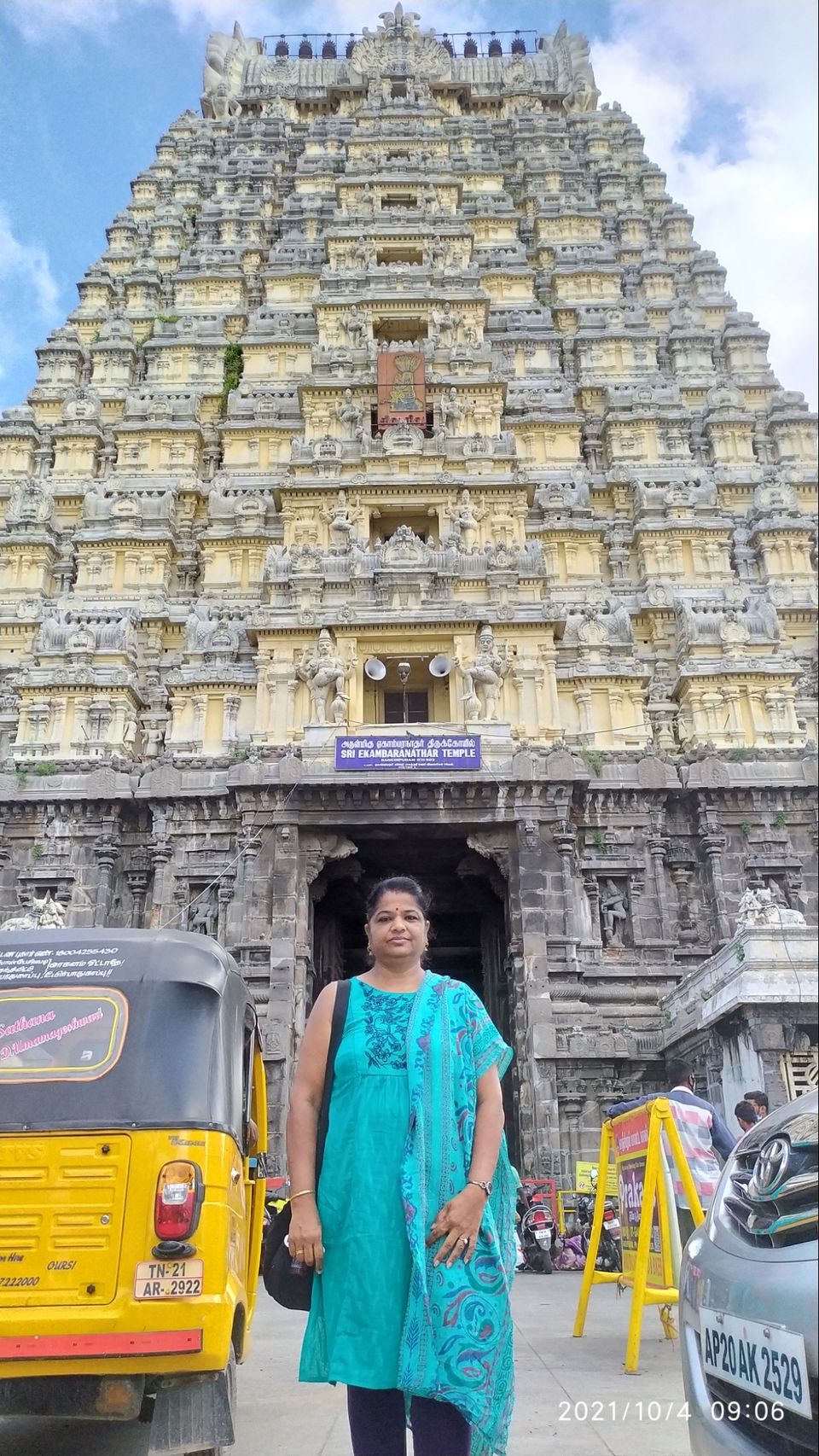 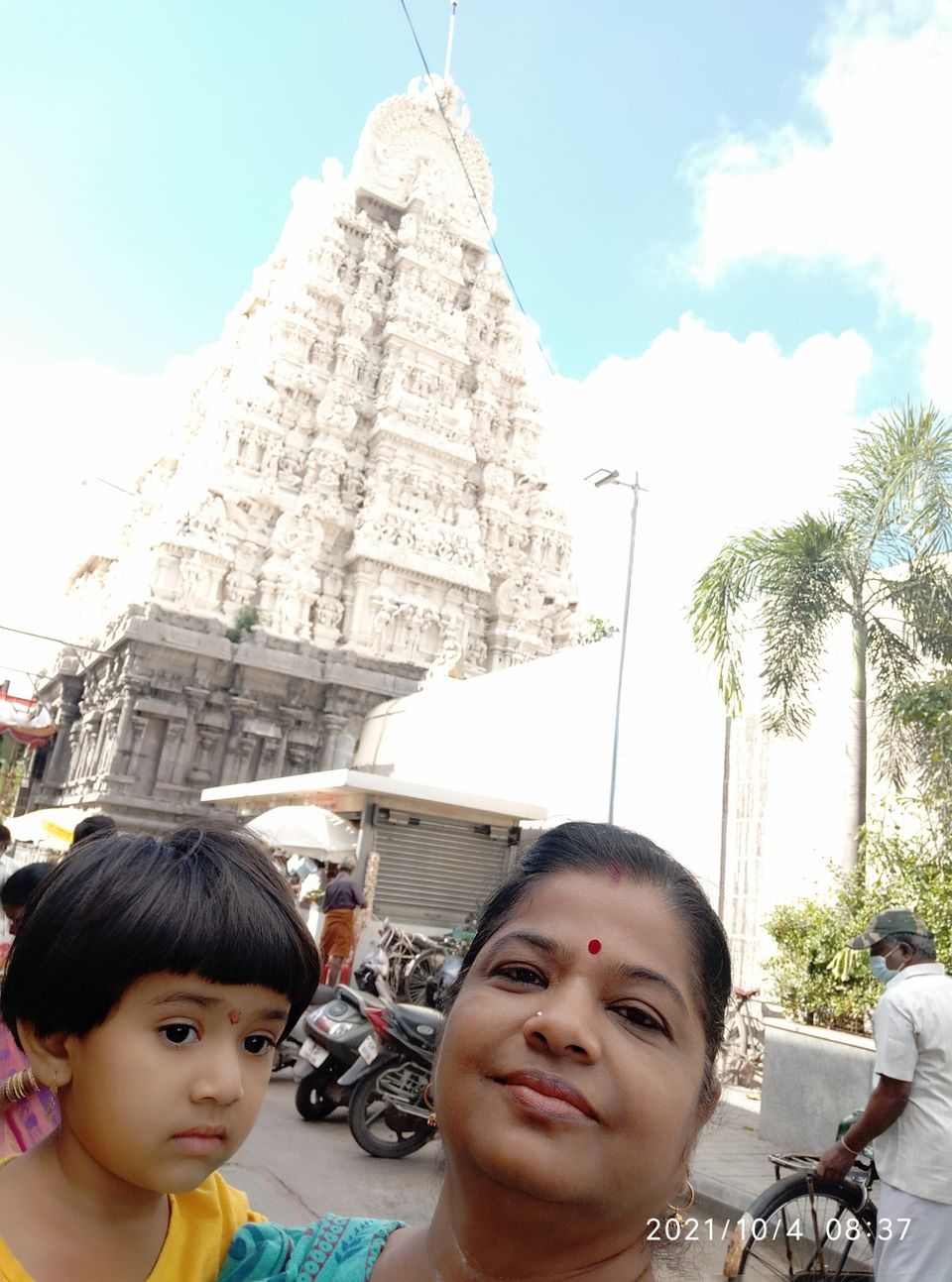 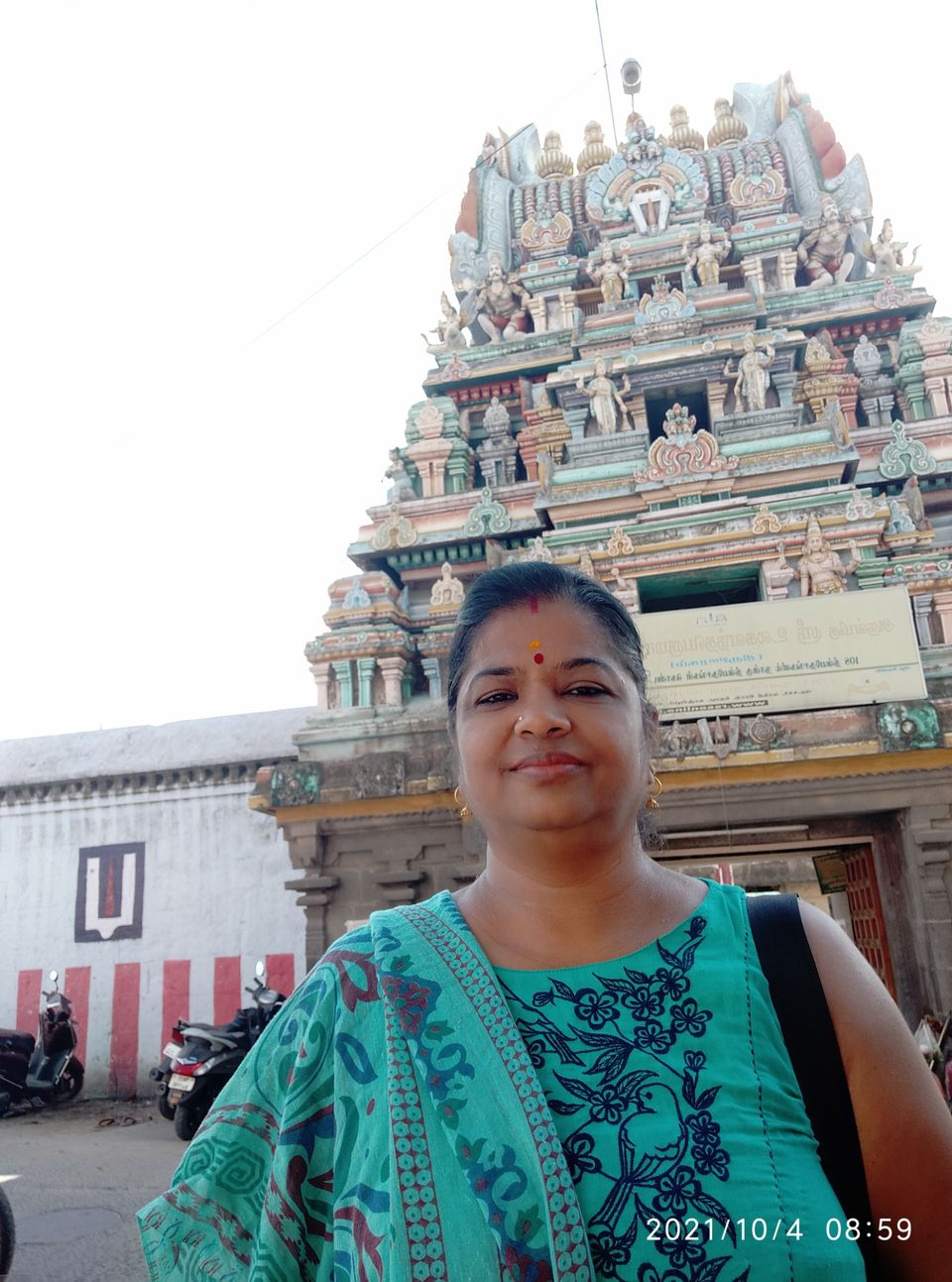 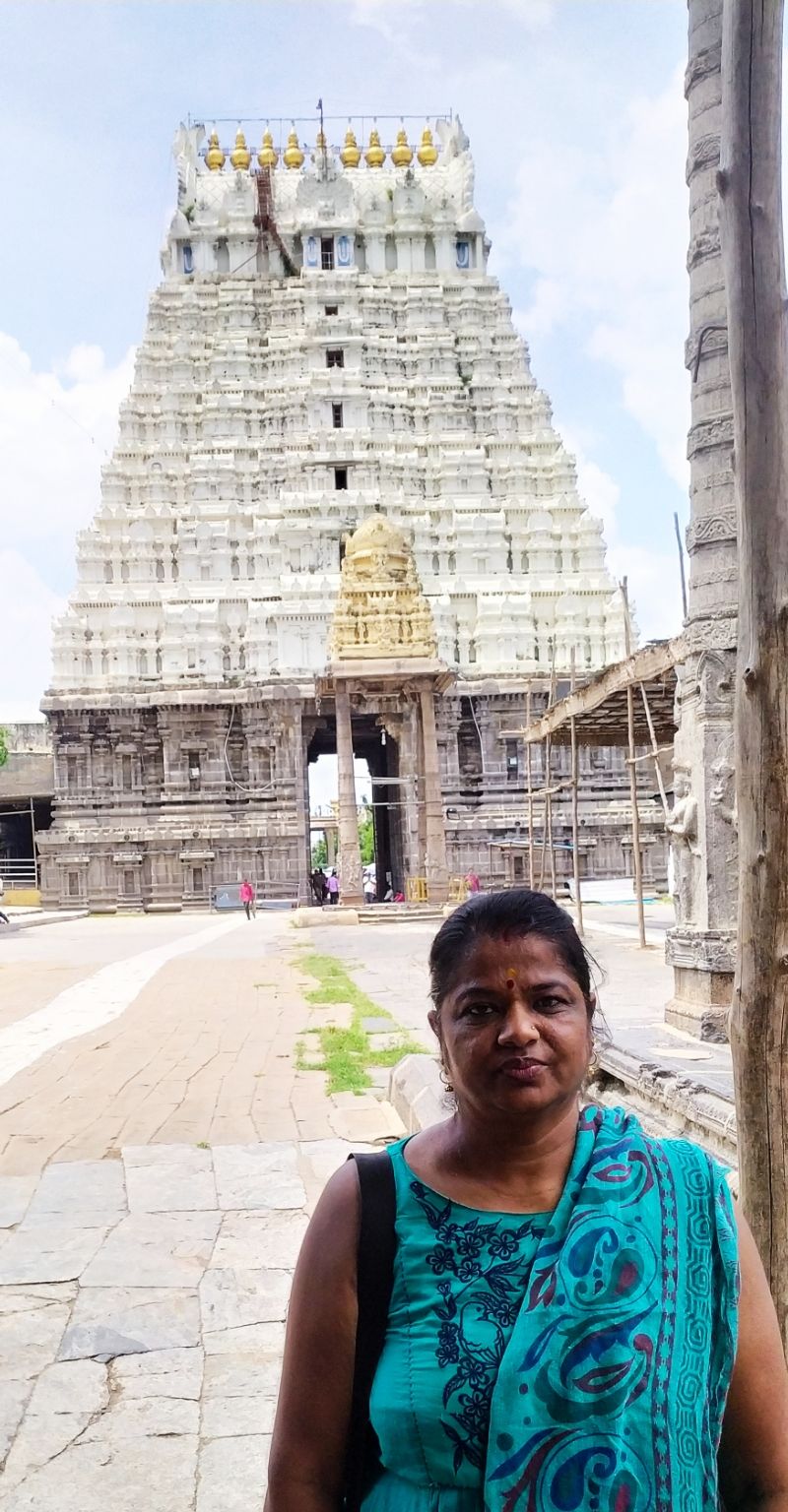