Greece Travel GuideGreece TripsLove Santorini? Then, You Must Travel To Peloponnese An Underrated Greek Paradise!

Love Santorini? Then, You Must Travel To Peloponnese An Underrated Greek Paradise! 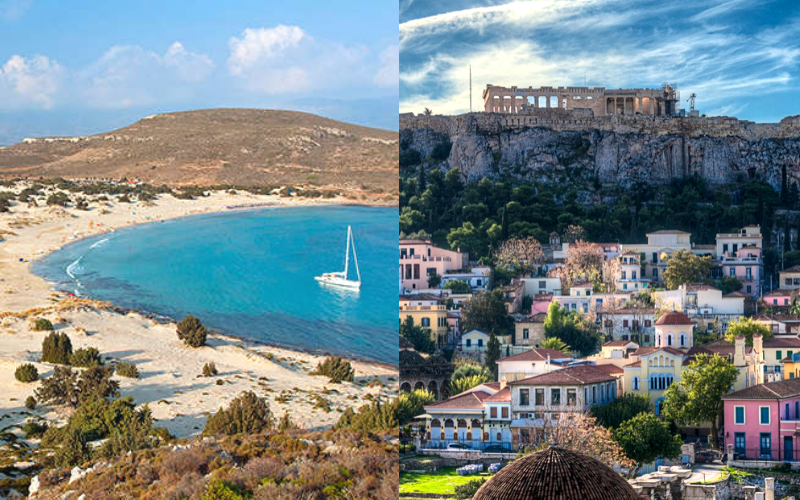 This is the place where Greek legends were made.

The land where Greek gods descended and the magic folk walked around creating stories and plot-points for the generations of movies to come. I am talking about Hercules, Helen of Troy, Sparta and the 300!

An hour's drive west of Athens, the Peloponnese is the large peninsula that hangs from the rest of the Greek mainland by the narrow Isthmus of Corinth.

Its wild, mountainous landscape is dotted with the ruins of Mycenaean palaces, ancient temples, frescoes in churches, and countless medieval hilltop castles built by the Crusaders and the Venetians.

Currency: The currency accepted in Greece is the Euro.

Here are two of the most popular legends of the land of Peloponnese.

Hailed as the most beautiful woman in the world, Helen was a daughter of Zeus who married Agamemnon’s brother Menelaus, the king of Sparta. Later, Sparta became a city-state known for its well-trained soldiers, the Spartans.

Their most famous battle involved just 300 of them attempting to stop a huge army of Persians from invading Greece.

Although not that many remains of the original city can be found, there is the theater, the tomb of the warrior-king Leonidas and a bridge foundation which can still be witnessed. Plus it makes one of the best views to gaze across at the mighty Taygetos mountains.

Just outside Pylos is one of Greece’s most beautiful beaches, Voidokilia. Above the beach is a mighty rock topped by a 13th-century castle and a cave that belonged to Nestor. It is also said to be where Hermes hid cattle he stole from the fellow god Apollo.

Peloponnese is the place where Hercules fought the Nemean lion and gods walked the earth, meddling around in mortal affairs.

From Corinth, to Nafplio the North-Eastern Peloponnese is the ideal place to start exploring the peninsula. Dotted with beautiful towns and archaeological sites, no trip to Greece is complete without a visit to Corinth and the Argolis which includes Myceneae, Nafplio, Epidavros home to beautiful beaches and a plethora of ancient history.

The region of Lakonia is located in the South-Eastern Peloponnese and has cities of Monemvasia, Sparta and the whole district of Mani with its traditional stone castles. Lakonia is a peninsula full of beaches and monuments making it a place of immense interest for all kinds of travelers.

The place where Olympics was born. A different aspect of Peloponnese is presented in the Western part divided into magnificent smaller regions that offer the guests a completely unique experience.

In the Ilia region, lies the legendary ancient Olympia, where the first Olympic Games were settled. Till date the Olympic Flame starts its journey from Ancient Olympia and then travels through the countries to announce the global event.

The central Peloponnese consists of one big region - Arcadia. The region is so big that it combines massive mountains and the marvelous Aegean sea. Located in the middle of Peloponnese, it's the go-to place for Greeks all year round, especially in winters due to the snow center in the Menalon mountain.

Full of green valleys and forests of unparalleled beauty, Arcadia has a long history through the ages, it is the hometown of many ancient heroes and prominent figures of Greece.

3.) Get mesmerized with the stunning landscapes of the wild Mani Peninsula and the charming old Venetian towns of Monemvasia and Nafplio.

4.) The Polylimnio Waterfalls are one of the best kept secrets of Greece. Trek through the woods in the Messenia region to uncover them. Polylmnio is a short drive from Kalamata, and contains a series of green lakes you can bathe in. Further north, the Neda river pours through a gorge of crystal pools and waterfalls.

5.) Voidokilia is a perfect semi-circle enclosing powder-blue sea. Simos beach on the easily-reached island of Elafonisis has a stretch of white sand linking a little island. The coves near Marmari down on the Mani have a wild feel. Lovely Selinitsa, near Gythion, has its own shipwreck while at Metamorfosi you can swim with the dolphins.

6.) Hike up the stone stairs of the world's best ancient theater. And watch an authentic costume Greek drama at Epidavros in July and August ( Epidavros show timings are 8am-7.30pm in the summer, 8 am-5 pm winter; Cost: £5.50 ie. around 440 INR).

8.) Marvel at the cluster of monasteries built high up on cliff ledges or click away the picturesque cobbled-stone hamlets dot the landscape, with the captivating medieval town of Mystras being a particular highlight.

Trains connect main towns but they are slow. There’s a reasonable network of buses serving Nafplio, Epidavros, Mycenae, and Kalamata, but they are often slow and services to smaller villages infrequent. To really explore the interiors, you can hire a car. It will cost you around £35 per day = 2,800 INR approximately.

Cycling is a very Peloponnese activity with plenty of options to explore different regions. Cycle around Laconia to bask in beach bliss at places like Monemvassia and Elafonisos. The areas are independently navigable with GPS.

Same goes for Messinia, where you can cycle from one seaside to another, having your bags transported for you while you enjoy amazing ancient towns like Pylos.

Another way to move around the ancient sites of the Peloponnese is to go on a small ship cruise, with a maximum of 50 passengers. Get off at places like Palaia to visit Epidaurus or Pylos to visit the historical town and Eponymous palace ruins.

The boat will also take you to rare spots such as the Mani Peninsula, a wild region of underground lakes, rivers, and the magnificent Diros Caves.

Best-Time To Travel To Peloponnese: April to October.

Spring is by far the best time to visit the Peloponnese. The climate can be very pleasant. Greek Easter is the biggest festival of the year and there's celebration in the air.

Besides which, the hillsides are covered with flowers in every colour imaginable.

However, there are sunny days, even in November -December, and there’s also the opportunity to ski in the mountains.

Summers should be avoided because the temperatures rise up to 40 degree Celsius and the beaches start getting over-crowded.

The closest airports to Peloponnese are in Kalamata and Athens.

Both Kalamata and Athens airports have many flight to and from major airports in India like Mumbai and Delhi.

A one-way flight from Mumbai to Kalamata in Greece will cost you around – 30,000 INR and take approximately 25 hours. You can check out the flights here.