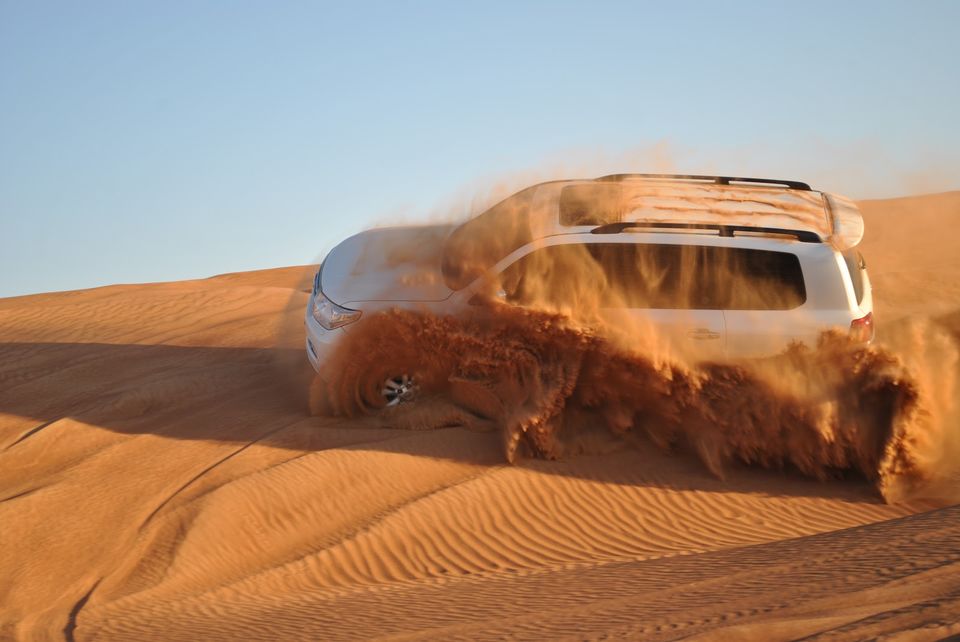 Dubai is without a doubt the most prominent city in the United Arab Emirates. Be it the cloud-kissing skyscrapers, cars that define swank, or malls filled with every brand present on the face of this earth, Dubai has redefined luxury.

Although the city has transformed from being next-to-almost-nothing in 1991 to the ‘Playground of Richie Rich’ in 2015, there are elements which never change. They shouldn’t change. The essence of the city lies in the rich culture, which it was ‘only’ known for a few years back but is still ‘also’ known for. If you have one day in Dubai, I will undeniably recommend you to leave the malls, leave the city, and book a tour for Dubai desert safari. There are multiple options available for tours including a morning tour, overnight tours, camel tour (which sounds fascinating enough for trying out the next time), the most popular of the tours is the evening tour which starts at 3 PM and drop you back at 9 PM.

With pick and drop facilities available from anywhere in Dubai, all tour companies employ the sturdiest SUVs and the most qualified drivers with years of training. I learnt this from our driver on the way and wondered why would anyone require ‘years of training’ for such a thing as driving a car? I laughed it off, pointing out to myself the obvious exaggeration.

The desert starts after a 5 minute drive from Bur Dubai, which lies on the outskirts of the emirate. The first look may, at once and for some people, be disappointing. You are on a road, driving next to sand. But, you should, and you have to, brace yourself for what’s coming next. After a few miles, you are surrounded by the desert. You can look in all the eight directions and will see nothing but a mustard majestic mar with you riding on its waves.

The moment the car climbed the first sand dune, the first time the engine roared with the effort, came the first slip of a few feet from the top of the dune, the regaining of balance and the driving down with sand-ripples flowing in the air and us flowing in the desert, I understood what use the years of training come to. The drive amongst the dunes lasts for 45 minutes to an hour and not once did it seem that our car isn’t going to slither finally out of control and turn turtle, not once did I stop praying, and not once did the driver lose his smile on seeing our scared faces or the control of the car. The ride makes your stomach churn, your temples burn, but overall it’s fun!

After the dune-bashing, they take you to an oasis right in the middle of the desert. It is still an hour to dusk when you reach. There are a few activities to indulge in before the night gathers and the entertainment begins. Quad biking and sand boarding seem the most sought after and enjoyable amongst them. Sand Boarding and the Oasis

Right after the sunset, the Arabic music lingering in the background takes the front seat. The light is dim on the outside and in the middle of the oasis, the Raqesah takes the floor in the spotlight and then begins the highlight of the evening- the belly dance. The dancer’s spectacle ensures that the visitors’ eyes are glued on her from the moment she steps in to the moment she disappears from the view. While watching the dance, you have an option of enjoying the traditional Arab Sheesha or Hukka, as it is more commonly known as, but the taste might be a bit bitter and the smoke too strong for most.

The dinner is served under the moonlight after the dance and it includes signature dishes such as Hummus, Malakeef, Falafel, Shawarma and Shish tawook, each of them too delicious to compare amongst themselves.

The ride back begins around 8:30 in the night and you are taken through a different route altogether to avoid the high dunes and considering I had eaten too much of the delicacies served, I was more than thankful for this gesture.

It is an evening well spent. Nothing screams ‘Arabia’ better than this safari.

HotelsMap
A town on the outskirts of the main city of Dubai, Bur Dubai is the place that builds up your excitement for the safari. All the cars about to go on the ride stop at various stations in Bur Dubai where they prep up the cars, check tyre pressure, and let you shop for some authentic Arabian merchandise.

HotelsMap
The place where all the action is!