The Jarawas : Adivasis of Andaman Islands

By The Rovers Trail

The Jarawas are indigenous people of Andaman Islands in India.They are believed to be here from last 55,000 years. It is said that the ancestors of Jarawas and other tribes in Andamans was the first successful human migration out of Africa. They live in the forests, they are naked like the real wild tribe, wear some ornaments normally made of palm leaves & shells and hunt wild pigs, monitor lizards, fishes, turtles and also eat fruits like jackfruit , local berries etc.

Bartang Island and Jarawas are very closely connected. This island is around 100 kms from Port Blair, between South and Middle Andaman & popular for it's beautiful beaches, mangrove creeks, mud-volcanoes and limestone caves. The way to Bartang Island goes through Jarawas's forest reserve. 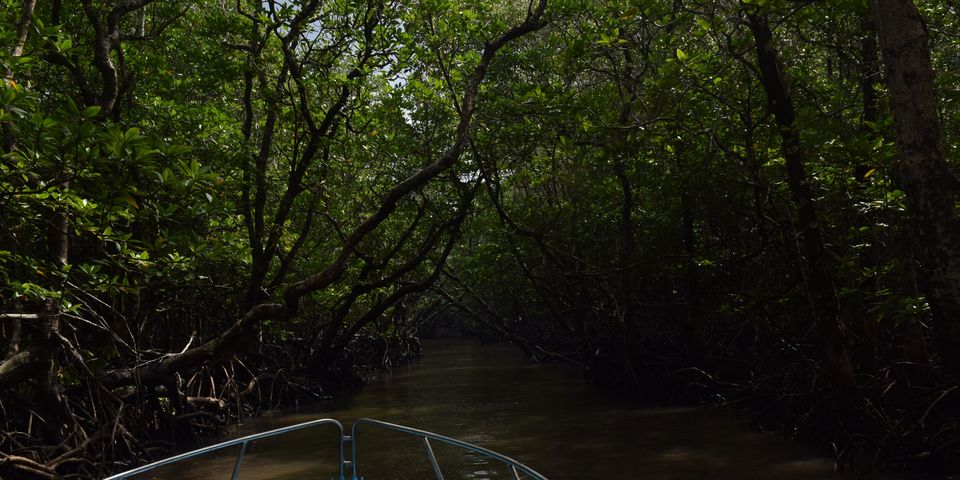 When we planned our visit to Bartang Island, we were very excited to get a glimpse of one of the oldest wild tribe and were wondering how can they be still the same - living in forests, hunting wild and staying naked. But we never realized that soon we are going to change our perspective about the same.

No one is allowed to go to the reserve individually, a complete convoy of vehicles goes together with police vans in the front and in the last. You need to have permits to enter this area and no vehicle is allowed to stop in the middle of this 40-50 kms reserve. This is mainly because in the past there have been instances where Jarawas have attacked the tourists, thrown some stones on the vehicles and have acted aggressive. 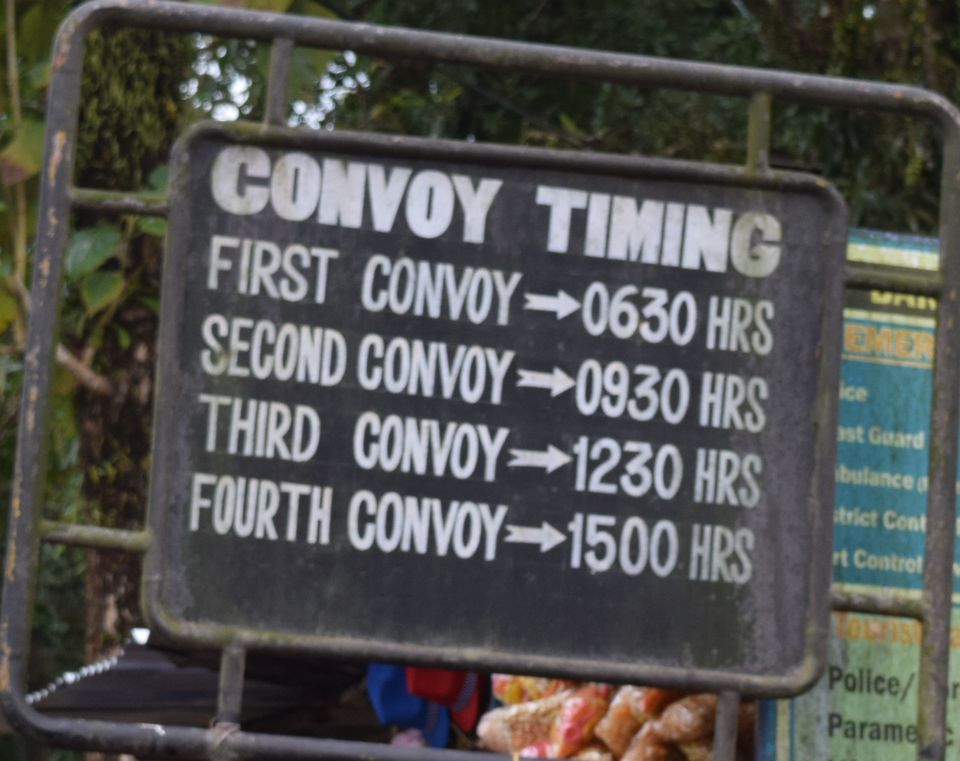 We had so many questions about them and we left no stone upturned to know about them & kept throwing our curious question to our driver & guide for the day. He was a regular visitor of the Jarawa reserve as he used to take tourists to Bartang island for a visit.

The journey to Bartang Island was a disappointment as we didn't get to see anyone. The guide told us that they were out for hunting in the forests and we might have a chance while returning. When we started the journey for Bartang Island, the forest department had some clear instructions put up on the boards to keep both the tourists and Jarawas safe. Few of them were :

* No stopping of vehicle in Jarawa Forest Reserve

* No communication with Jarwas in anyway

* Not allowing any Jarawa to sit in your vehicle

* Not giving any food items to Jarwas 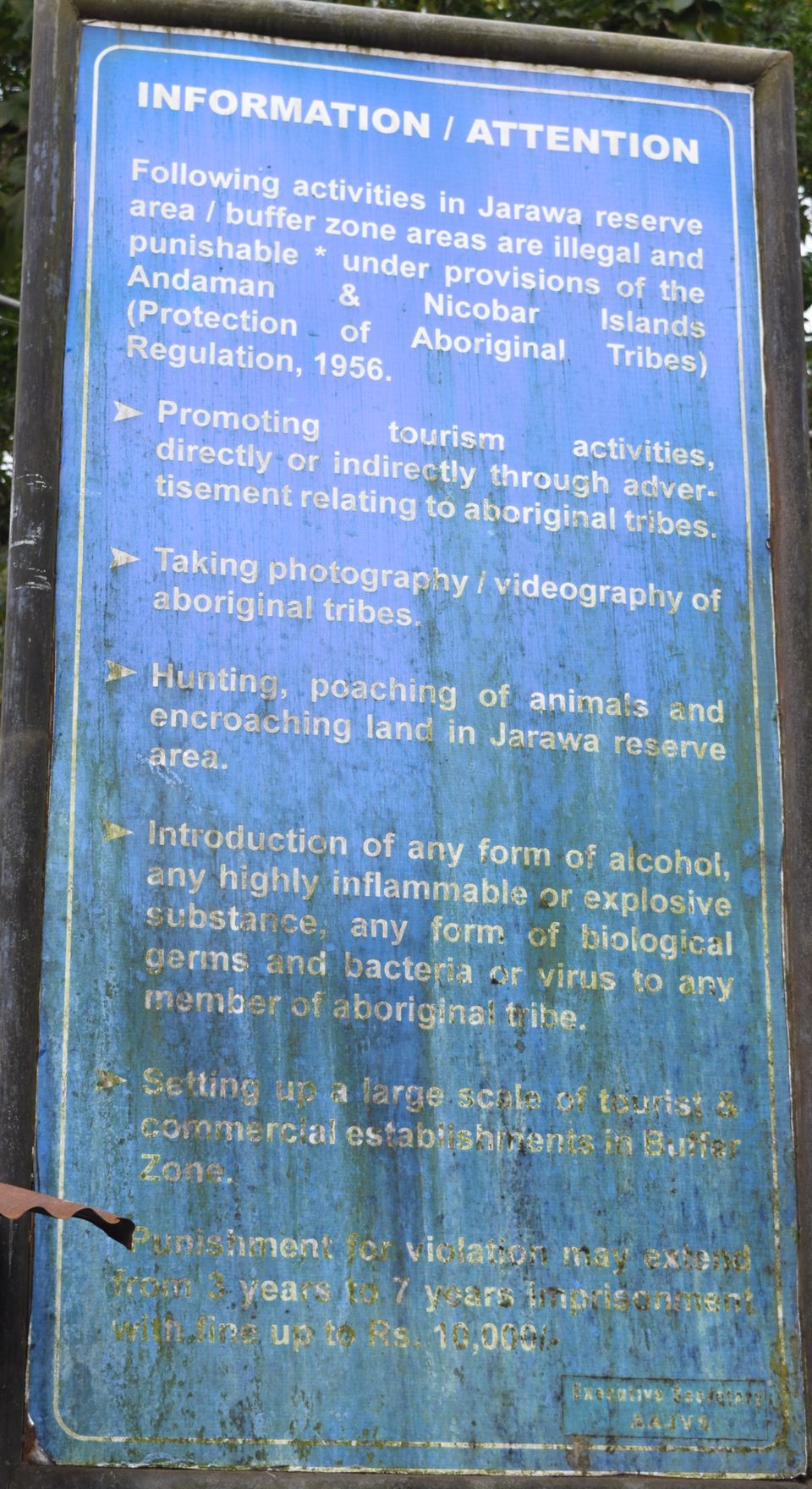 After having an interesting visit to Limestone caves in Bartang Island, we were ready for our return journey to Port Blair through the reserves. It was only 15 minutes that we had started,we saw all the vehicles stopping in front of us, here they were. It was a Jarawa family stopping every vehicle and asking for food with their hand actions as we didn't share a common language with them.

I was awestruck to see them, they looked like Africans but their heights resembled us - Asians. Kids had a very beautiful band on their head and they were carrying some baskets to collect the food. They were wearing some clothes, someone might have given to them & they accepted to wear. Surprisingly, in spite of so many notices everywhere people still handed them food & water. We were not sure if that was a good thing or bad. Our guide told us to hide everything below the seats, sometimes they try to grab things.

And the return journey was long, we had these stops in every 15 minutes and lot of Jarawas were approaching the vehicles for food. There were two specific instances which are worth mentioning :

1) A group of young Jarawa boys stopped our vehicle, asking for Paan and that too in Hindi. Our guide told us that few of the drivers, gave them Paan when asked for food, now Jarawa males always ask for Paan , it's like an addiction for them. As far as Hindi is concerned, he told us that government has started schools in the Jarawa areas and the young generation is learning Hindi.

2) This was the last Jarawa group that stopped us and scared the shit out of us. This was a group of middle aged Jarawas , they had weapons in their hands, and all they wanted was PAAN. They had different designs tattooed on their body and faces which made them look little scary. It took almost 10 minutes for our diver to convince them that there was no Paan with him.

On the way, our guide showed us some trees , which were half broken, he told us that Jarawas also eat termites from these trees.

The day was very interesting and we got to know lot of about the Jarawas, but our hunger to know more about them landed me to Google after we were back from Andamans.

There were facts that we didn't know, and some of them are :

* Visiting Jarawa reserve was like going for a Human Safari. They are out in the wild and we tourists are watching them with amazement.

* It's illegal to advertise about these safaris.

* India’s Supreme Court in 2002 ordered that the highway through the Jarawa’s reserve should be closed, it still remains open.

* Poachers enter the Jarawa’s forest and steal the animals the tribe rely on for their survival.

* In 1999 and 2006, the Jarawa suffered outbreaks of measles – a disease that has wiped out many tribes worldwide following contact with outsiders.An epidemic could devastate the tribe.

* There have been attempts to push the tribe to join the country's dominant society, which can have a devastating effect on tribal people. Jarawas shows no sign of wanting to leave their life in the forest.

* Government has take some steps in direction of education and medical help, which is now being provided to the Jarawas.

* There are many organizations in the world who are working for the rights of Jarawa community and trying to save the oldest of it's kind tribe.

After researching about them, we were dumbstruck because knowingly or UN-knowingly we were part of this safari and contributed in a way we shouldn't have. Knowing more about them after seeing them was painful.

Unfortunately, this reserve road is the only road connected to North Andamans and for visiting places like Rangat, Mayabunder, Diglipur etc. If you are traveling to Bartang Island from Havelock Island, we have heard that there is a ferry for the same. Although not sure, if there is any ferry from Port Blair as well. If you plan to go to this place and if you find a ferry, please take that instead of the road route. This might be a small step in protecting the oldest of tribes and becoming a responsible citizen.

Kevin Kelly has correctly said "Travel is still the most intense mode of learning."

SPONSORED
Want to book a similar trip?
I accept the Terms of Use and Privacy Policy of Tripoto.
SPONSORED
Related to this article
Things to Do in India,Places to Stay in India,Places to Visit in India,India Travel Guide,
Tagged:
#Andaman and Nicobar Islands#India#North and Middle Andaman#nature#nature