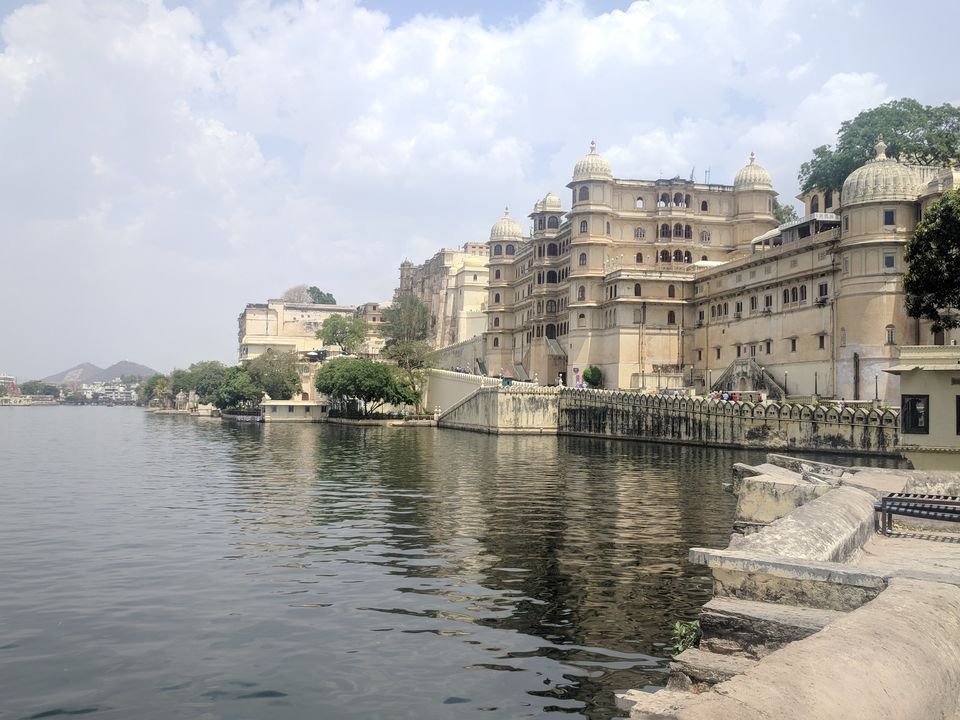 A weekend trip to Udaipur. This one has a special place in my heart because of multiple reasons. First being the companions, second, the beauty of Udaipur and third being the unlimited and unforgettable memories that we collected in those 2 and a half-day trip.

When we started the planning, we had almost 6-7 people onboard for the trip but as it happens with most of the trips, 4 of them backed out. (I'm not mentioning the names here, considering the social embarrassment that you guys will have to face after this 😜) We discussed the itinerary with Lalit Sir (AKA Lala) since his close relatives live there and he knows the city quite well. He drafted a perfect plan for us.

We took a bus from Indore to Udaipur at around 20.30. I, Lalit and Nitish sir gathered at the Bus Stop on time and waited for the bus till it arrived. Actually, I waited for the bus, the other two were busy on their phones 🤦🏻‍♂️.

The bus arrived at the stop, we quickly boarded the bus and it left at 21.00. The bus took 9 hours to reach Udaipur and dropped us at the Udiapol bus stop at 6.00 in the morning. We went to a nearby hotel, took a room there and went to sleep.

And that's how Day 0 concluded for us.

After sleeping at 6.00 in the morning, Lalit woke me up at around 9.00 saying that we should get going if we want to follow the plan. Even though I was half asleep, that point went straight into my subconscious mind and woke me up. By 10.15, we were ready to roll.

According to the plan, the first step was to rent Activas. The logic behind this was to avoid the hassle of waiting for cabs. We went into the city to a rental shop named District RJ 27 Bike rentals. We took 2 Activas on rent for the next 2 days.

The first thing that we did after getting those was breakfast. While searching for some popular options, we ended up at a place near City Palace (first destination of the day) where people were having Dal Bati as their breakfast. (Really? Yes.) This could happen only in Rajasthan.

Honouring the culture and our hunger, we also had those and it turned out to be a pretty good decision.

After filling up our bellies with the spicy Dal Bati, we went to the City Palace, which was the first destination of the day.

City Palace at first glance looked like a Giant Palace which is well maintained by the ASI. Unline others palaces, this one was off-white-ish. We bought the tickets and went in. After going in, we came to know that the palace is situated by the famous Lake Pichola.

The view was beautiful. We stood at the lakeside for almost half an hour despite the scorching heat.

We then went inside the Palace and visited the museum there. After spending almost 2 and a half-hour in the palace, we decided to hit the next destination.

I didn't know why they call it The Monsoon Palace but when I went there, I could see the reason behind that name. The palace is situated outside the city and it took us 30 mins to reach there. The road till the palace was steep as it is situated on a hilltop.

We could see the whole city from there. The place was quiet and soothing. We set on the boundary walls and played old songs on the speaker.

The view in front of us was the city of Udaipur, Hills and dense black clouds ready to drizzle. While the Udaipur City was touching almost 38 degrees, we were experiencing cold breeze at the Monsoon Palace. That's when I came to know why it is called by that name.

We spent 3 hours there. It was 16.00 now. We saw the Zoo as well which was situated the at base of Monsoon Palace.

Our next destination was Shilp Gram. It was kind of an artificial village in the mid of the city. They had all sorts of activities there. It felt like we were in an actual village when we entered the campus. We had our lunch there. It was again, Dal Bati. Then they told us that the traditional dance performance is about to begin. We went towards the amphitheatre. There was still some time left for the show. So we went to the artists sitting there and talked to them. They were more than happy to describe what they were going to do in their performance and we were also excited about that.

The performance started. There were multiple. So, this series of performances included all types of traditional music and dance types that exist in Rajasthan. I liked the last part when the artists go into the crowd and ask them to Dance along with the artists. We also danced with them. It was a great experience all together.

It was 19.00 on the clock and the sun was ready to set within minutes. We were tired. dehydrated and full of sweat. So we decided to head back to the hotel and take a shower and then go out to have dinner by the Fateh Sagar Lake.

We reached the lake at 22.30. I and Nitish were on one Activa and Lalit was on the other one. On a square, we took the right turn. Lalit took the left one and that's when the chaos started. It took us 30-40 mins to find Lalit even though we were on the same side of the lake.

But finally, we found him and then we had our dinner on the famous street food shops near the Fateh Sagar Lake and then relaxed by the lakeside. After spending an hour by the lakeside, we went to Sukhadia Circle which is famous for its Ice Gola.

It was half-past 11 now and we decided to take some rest so that we get up fully changed the next day because Day 2 was going to be more hectic.

So that's how we ended Day 1. Everything went according to the plan. We slept early because we had to start early on Day 2.

The plan was to visit Nathdwara, which was 35 KM from Udaipur. The road was a straight highway but we had Activa and not Dominar. Although I pushed the limit of that Active as well and managed to touch 95KMPH. We stopped at a point in between to click some pictures and then continued our ride till Nathdwara.

The temperature was rising with time but we reached Nathdwara at 8 so it was not that hot at that time. The reason behind this hurry was that the temple at Nathdwara opens only at specific time intervals. So if we miss the first window, then we had to wait for 3 more hours doing nothing. Luckily, we reached there on time and got into the temple within the first window.

We spent some time at the temple and then went to the nearby market for shopping. After roaming around in the market and doing window shopping, we decided to get back to Udaipur via Eklingji. We hydrated ourselves and left Nathdwara at quarter to 11.

Eklingji was 27KM from there. It took us a quarter of an hour to reach there. We entered the temple and got to know about its glorious past. We spend half an hour there and then got on our way back to Udaipur. It was no more than 3KM when Lalit went off-road towards a Lake. Which seemed logical at that point of time because the temperature surged soo quickly from around 25 to 38 degrees. After a bit of off-roading, we reached the lake There was no one around it. We parked the Activas, turned on the Bluetooth speaker and sat beside the lake.

No one was talking to each other, I guess it was because of the quietness and peace beside the calm water. It was serene. After approximately 45 mins, we realised that we have to reach Udaipur so that we can execute the rest of our plan and cover the remaining places. So we got up and once again, got on our way toward Udaipur.

We reached Udaipur at 13.00 and went to one of the famous places there called Saheliyon Ki Bari. It is an 18th-century architecture gifted by the King (Rana Sangram Singh) to his Queen.

We reached there and hired a Tour Guide. He was an old man in his 70s but was full of enthusiasm. He guided us through the monument and told us every minor detail about it.

The tour took roughly 30 mins. We came out and hydrated ourselves with some sugarcane juice and then we decided to go to Bagore Ki Haweli. This is the place where multiple movies are shot. Be it YJHD or Dhadak or Ramleela or many other. So we went inside the monument and started exploring it. In the process of exploration, we reached the terrace and there we found a small dome-like structure. We sat there as we were exhausted because of the unbearable heat. I still don't know how, but a cool breeze of air hit us inside that dome. We sat inside that for a while and don't know when we unintentionally slept 😂. Lalit woke up after a while and told us to wake up. We then explored the rest of the Haweli (Palace) and found a Puppet room there.

The room was full of puppets. I had never seen so many puppets in my life. We clicked a lot of photos there and spent a good amount of time between those puppets. After that, we came out of the Palace.

We still had a lot of time left as it was 16.00 on the clock and our bus was scheduled at 21:00. We decided to visit the Rose Garden ( Gulab Bagh ). It was a huge garden. Kids were playing football there, so I also tried my hand on that. It took us one and a half hour to cover the whole garden.

From there, we decided to go back to the main city to submit the Activas and then head to the bus stop. So, we reached at the RJ 27 Bike rental shop at 18:00 and submitted our Activas. Then we went to the nearby Jagdish Temple.

And from there, we left for the bus stop. We still had an hour left which we decided to spend at the bus stop. Which was a wise decision as I made a good friend there, Veronica. She was finding it difficult to communicate with the guy on the bus stop. So I helped her.

Finally, the bus arrived and we boarded it. We reached Indore the next morning at 7.15.