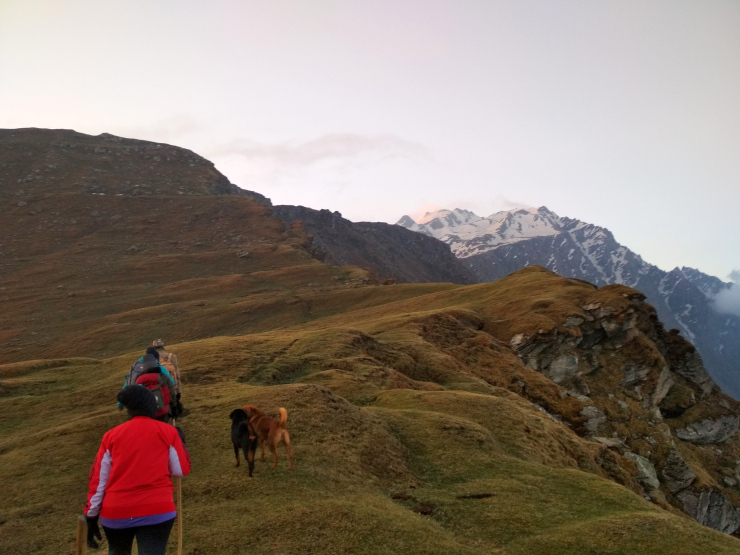 Let me answer that with a story.

The rain beat hard against the canvas sheet. The thunder cracked and roared as if tearing the sky into pieces. The lightning dazzled the night into day. Amid the bitter cold and incessant downpour, I prayed for this last night to pass safely.

When I was on the brink of sleep, I heard a growl. I could almost picture glaring white canines, and sense them close to my side of the tent.

The sturdy bamboo stick rested next to me, ready to turn into a weapon on my command. Do I really have the courage to pick it up? I wondered.

Torrential rains bellowed as we huddled together inside our tents. The cold menacingly penetrated through the sheath of my sleeping bag, a sweater and a thick layer of warmers. The winds were so strong and furious that I was almost certain that our tent would fly away.

Those sleeping in the middle were very much in comfort, receiving the warmth from people sleeping on both sides. I wasn't so lucky that night.

Another growl that followed it set my pulse racing. I turned on my left and pulled out my hand to grab the bamboo stick and waited. My gaze followed the sound as it moved around the tent, clearly cutting through the noise of the rain.

A snarl and a heavy breath followed. There was a movement against the canvas of the tent, then it stopped. 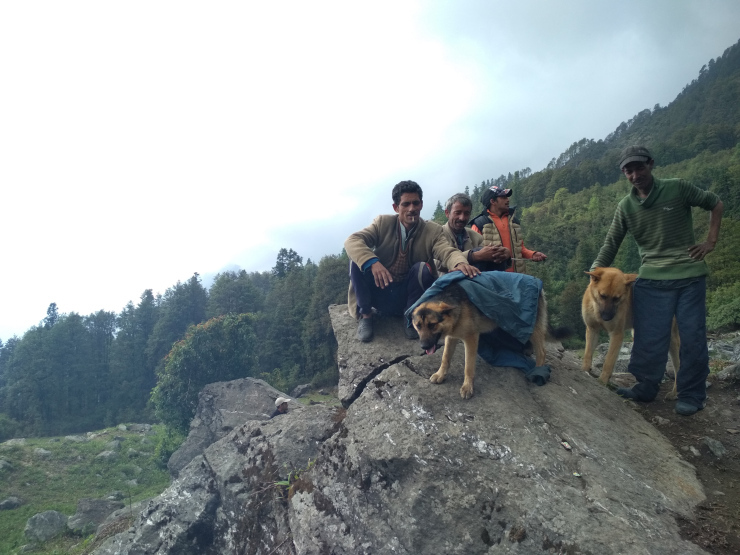 The mountain dogs were probably fighting for space to take shelter from the rain. The pet canines at various camps would somehow find us whenever we got closer to the campsites.

I assumed those to be the mountain dogs and stopped reliving my fear. The night continued with the monotone of the rain that drifted me to sleep.

It was blurry at first, then I heard somebody call out my name. There was an unusual disconnect that happens when one wakes up from a deep sleep.

"Sheeba! Sheeba! There is something outside our tent!", Yashaswini whispered panickily, her flashlight faced downward, leaving the tent in dim, ghostly light.

"We heard a growl. There is some animal outside the tent.", said Pooja.

"It is okay, it won't do anything, neither will it come inside-the tent door is tied well (it was a thread lock, not a zip lock tent) and there are too many people here."

"We heard somebody scream in pain-what if someone from our group is outside and in trouble."

The two girls were wide awake and looking at me, holding a bamboo stick in one hand and a torch in other. Their faces had turned white with fear.

Suddenly, it dawned upon me that I was the group leader. I had to do something and the first thing I did was disbelieve.

"It must be some animal. There are cattle around and animals do hunt at night"

"That cry seems to be moving. Wait for it until you hear it."

All of a sudden, a piercing ghostly shrill, a terrible cry of pain-as if it was getting ripped into pieces-shattered the silence of the night.

Chills randown my spine as I sat aghast, wide-eyed and in complete shock. The two girls stared at me as if they had forgotten how to breathe; as if the time had stopped ticking for them. The three of us sat frozen in our places.

"Hold up your sticks. If you hear the growl again, bang them against the iron rod", I pointed towards the centre of the tent, "It will scare the thing away."

"But, what if somebody from our group is outside! Someone may have gone to the toilet, the sound came from the direction where the boy's toilet is."

The fear struck me in the face, but I didn't want to imagine things or visualize it. Something had to be done. First, we woke up seven other girls in the tent and told them everything.

"We will wake up the people in the next tent by shouting their names and asking them to check if anyone is missing.", I said.

We started shouting out the names of people who were sleeping in the adjacent tent. After a few minutes, the guys woke up and confirmed that they were all there.

By the time the message was passed onto the last tent we, all our tent mates heard another inhuman, shrill scream of a unfamiliar creature -this time the sound was more distant and seemed to be dying away.

My heart raced as my brain almost painted the picture of an attack with blood dripping from the poor creature as it ran for its life.

I immediately called out to others to wake up the camp leader.

"On the count of 2..!" and we all shouted his name at the top of our voices. We shouted for a good 5 minutes before I noticed light beams dancing outside our tent.

I peeped out of my tent and shouted at the silhouettes in the dark.

"Get in! There is something here!"

"What happened?" "There is nothing here. It must be some animal on a hunt. Don't worry."

Unfortunately, most of them were in slumber when we heard that high-pitched cry the last time. Nobody, not even the camp leader believed us-he claimed that there were no bears, no animals in those forests, which I thought was absolute foolishness to believe in, in a dense mountain forest like that. 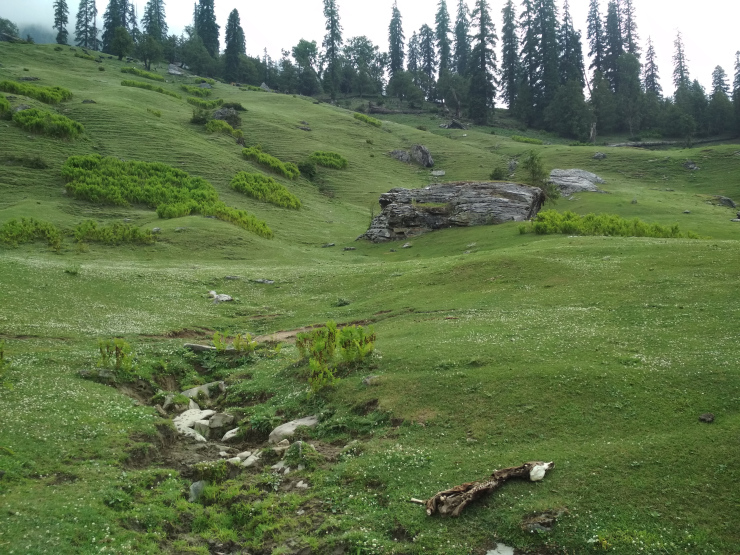 The incident became 'the joke of the group' until we reached our last camp. Few of us even saw a half-eaten carcass of a young cattle on our way to a beautiful waterfall near our campsite.

As the daylight receded into the night, we started a campfire and soon the jokes from the previous night's incident started floating around.

That moment, our new camp leader spoke up and warned us about the wild animals that strayed in that area at night. He did assure us not to worry and informed that there have never been any cases of attack.

However, he said they did take safety measures (like keeping a knife and gun, staying awake late in the night) if the situation may arise. 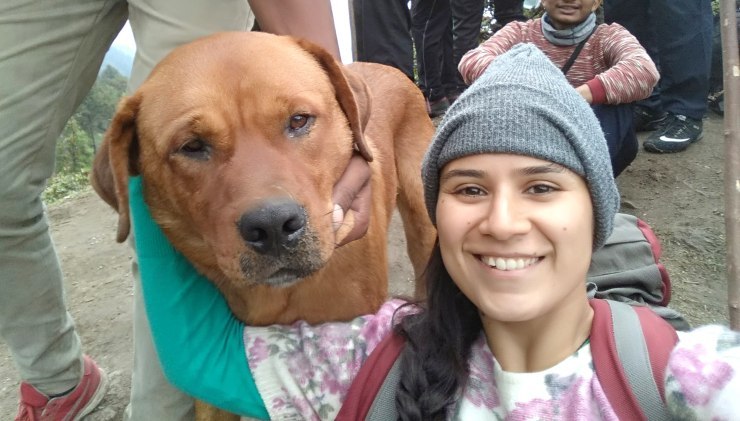 The jokes died down behind the crackling and popping of the burning wood and soon we were told to rush into our tents. As it rained that night, only I heard the growl. I didn't dare peep out to check if those were dogs or something else.

We three still wonder what animal made that piercing shrill that night. Whatever it may, the mountains had cautioned me to be alert and responsible at all times.

Precautions to Take When Trekking in Mountains 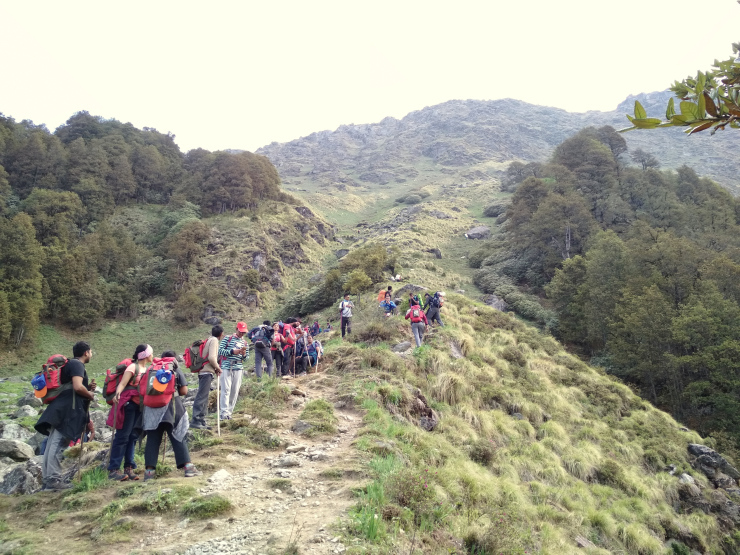 Rule#1: Stick with your group. Don't deviate from the route, thinking that you are faster or know the trail.

Rule#2: If you are lagging behind, call for the trek leader and ask them to slow down.

Rule#3: The sun drops earlier in the mountains as compared to the plains (almost an hour early) so when the camp leader asks you to retreat to your tents in the evening, do so. 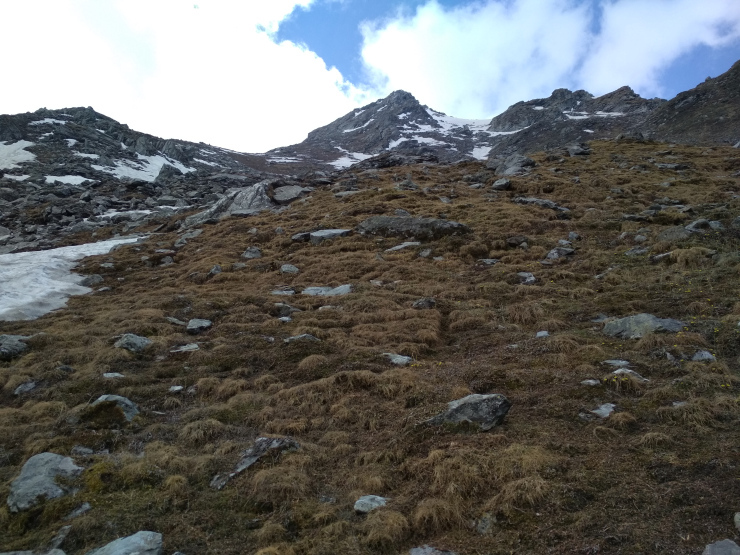 Rule#4: The temperature drops rapidly in the mountains after sunset, wear warmers and jackets in the evenings.

Rule#5: Never go far from your campsite, especially at night. If you have to go to the toilet at night, inform the camp leader and take at least two people along with you.

Rule#7: Let your group know when you go around, exploring the campsite area, even in the daytime.

Rule#8: Inform the camp leader if someone is injured or sick. Mountains being high-altitude terrains can get cold and hostile.

Rule#9: Trust your instincts-if a situation arises, let your intuition guide you.

Explore more of my travel stories at 2littlemoments