A leap of faith: Bungee jumping at Rishikesh. 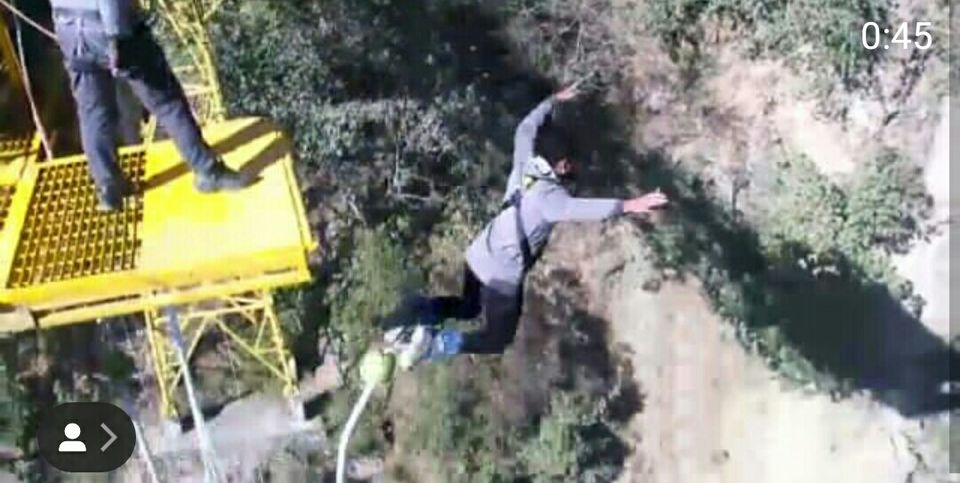 Are you scared of heights??!

Yeah..?! That is totally alright, most of us are; And so was I, until I jumped from a tower that was 83m high- India's highest bungee platform. If I could do it, you can do it too. Read on!

Having done cliff jumping the previous day from a cliff that was only 45ft high, I thought I was ready for the bungee jump though I knew it was nothing close. I got up early in the morning with full excitement and a lot of fear. Jumpin Heights office is about 45min drive from Rishikesh, and all along the way, I could only battle with my fears about jumping from a bridge that was almost 300ft high. There was excitement too, but the horror had cast its shadow over joy, so dark, that all along the way I never uttered a single word! Even before looking at the tower I was scared to shit and yet I badly wanted to try. As I was convincing myself that it will be alright, we had already reached the Jumpin heights office. After all the quick formalities for entry, we were shown an energetic trailer on adventure sports that Jumpin heights offered, which shot my adrenaline level up, and I was pumped up with excitement to jump head down, from the bridge.

It was a short walk from the office to the tower-about 600 meters; and as I walked every meter closer to the tower, the zeal with which I left the office decreased, and by the time I reached the tower it was zero. I was as anxious as a kitten on a hot tin roof. We were a group of 6 people and there were 3 other people ahead of us, so I had to wait. The longest 20 min of my life passed by; and with every minute passing by, my fears started to take control over my brain and by then I had started to think about withdrawing myself. Jumpin heights have strict rules about not allowing people with bone dislocations to jump, and I, having had 4 of 'em totally(3 on my knee cap and one in my shoulder) had not mentioned about it to the officials (I wouldn't recommend or encourage anyone to do something like that). This being one of the reasons, I was ready to walk back to the office. Just as I thought of reasons to jump, I was called by a dive instructor to fasten my harness. From the seat where they tie your harness, you can accurately actually get an idea of how high the bridge is. Having a peek towards the bottom of the bridge is really a very BAD IDEA. So no matter how curious you are, never look down. I repeat, Never look down!! My curiosity had gotten over my head and I took a peek... and nothing was same after that!! My anxiety shot up to a different level. People below literally looked smaller than ants. You must understand, I don't actually have fear of heights, I do, however have a fear of falling from heights. :P By now I had started to think it was a very bad mistake and I'll somehow have to pay for it.

A faint voice broke my attention;

"Is the harness tight enough??" asked a lady. I was pulled back to reality.

"I don't know, you tell me! how tight is 'tight enough'??" I asked her back. By the look on my face, she understood I was scared af.

She laughed and replied "Everything will be alright, You're going to love it, just enjoy the music." It was only then that I realised bollywood music being played and that there were 3 more instructors too to double check the harness.

The dive instructor called me telling its my turn next. I walked towards him as if I'd forgotten walking, and somehow my brain had stopped responding; my server was down and there was no backup! After the third layer of harness, and cross checking, they made me sit on a chair near the edge. Somehow, I had started to gain confidence again and I was sure that I had to do it; at least to overcome my fear of heights. I was asked to stand up and walk towards the edge. My curiosity was on top of my wisdom, and I took a peek again at the ground; and back to square 1. I felt dreadful; all the confidence I'd gained, vanished within no time. I could feel my heart trying to jump out of my chest, I could hear my brain cells shouting " Don't do it!!! " My fright held me back from enjoying, but all I knew was I had to do it!

"3.... 2....1.... jum-" I heard the dive captain's count down, and before he could finish the word jump, I was off the platform; for all I knew, the longer I waited there, the more I gave chance for my anxiety to get the better of me. I was flying. I felt weightless having left all my horror behind. I found out that, all this while, there was no reason for me to trip over my anxiety. I was so afraid of falling all this while that I never thought about how amazing it'd be to fly. It gave a prodigious thrill and I'm at loss of words to explain the feeling!! Nothing could have happened better that day. Before I knew, I'd done it. The smile on my lips refused to die. My brain cells were shouting "You did it.!!" As I tried to control my excitement, I was carefully made to lie down on a bed while the assistants removed the harness and gave me a badge that read "I've got guts." It was such a proud moment to have earned it. I looked back up and had a sense of achievement. It was all over within no time. I wanted to do it again. All that I worried about was over nothing. I realised that my fear about taking the leap was so over-rated. What I experienced was completely opposite of what I was fretting.

Our mind likes to think and it never seems to want to stop. Often in life, we don't just think, we overthink; Building up scenarios in our head is so common, we do it almost everyday about everything. It is only when the anticipated moment comes to life that we realise that all that we had been thinking all this while was over rated. Worry does nothing but steal our joy and keeps us very busy doing nothing. Finding comfort outside your comfort-zone is not difficult, we just have to drop off the extra baggage of fear, insecurities and everything else that's holding us back from enjoying the moment. We always fail to realise that no amount of anxiety makes any difference to anything that is going to happen. December 9th shall be remembered for my experience in overcoming my fears, leaving my insecurities behind and taking the leap of faith. :)

So if you're planning to bungee jump, there is absolutely nothing to fear about. 'n hey, if you're still here, Thank you for reading!! Wishing you a great day.

You can do it! You can achieve anything!

Note:- The cost of bungee jump is 3550 + gst. There are other sports too like flying fox, long swing etc.

You are supposed to pay entry fee of 100.

Be ready to trek your way up to the office after the jump.

If you've had bone dislocations then it is not recommended.

They charge you about 700-800rs for the video footage. You will get it in a DVD and on your phone.

It is once in a lifetime experience, so don't let your fright get the better of you 'coz You rock!!