My third solo trip was for to meet my creator and for that I rode to Tunganath Mahadeva which is the highest located Shiva Temple in the world.

Located at an altitude of 12000 feet on a mountain called the Chandrashila peak Tunganath Mahadeva is one of the Panch Kedars. The Panch Kedars include Kedarnath, Tunganath, Rudranath, Madhyameshwar and Kalpeshwar.

I started my 450 kms. ride in morning from Delhi to the mighty Himalayas which amuse me every time. My first halt as usual was Rishikesh to have some lip smacking food at Madras Cafe which is a restaurant at Muni ki Reti.

Then I started for my destination which was Chopta also called the Mini Switzerland though I really do not understand why people have to label everything Indian with an European tag as it has a beauty of it's own. From Chopta the Tunganath Mahadeva temple is a 4 kms. trek.

I have now ridden a lot in the Himalayas and with this trip I clocked almost 2000 kms. of riding in the mountains and those mountain roads never fail to bring the smile out of the biker inside of you the curves of those roads, the uphill climb, the downhill descent and the views. Everything culminates into a dream for the motorcyclist.

From Rishikesh my stop was the Tehri Dam located on the Bhagirathi river and is indeed a man made marvel. The lake behind the dam is an ocean in itself and below that ocean lies the old city of Tehri. The Tehri dam is a must visit place for the size of the dam is intimidating enough for anyone. It is almost 760 feet in height!

But the sad part is that it has severe eco system and environmental issues associated with it.

The Tehri lake at the hindsight 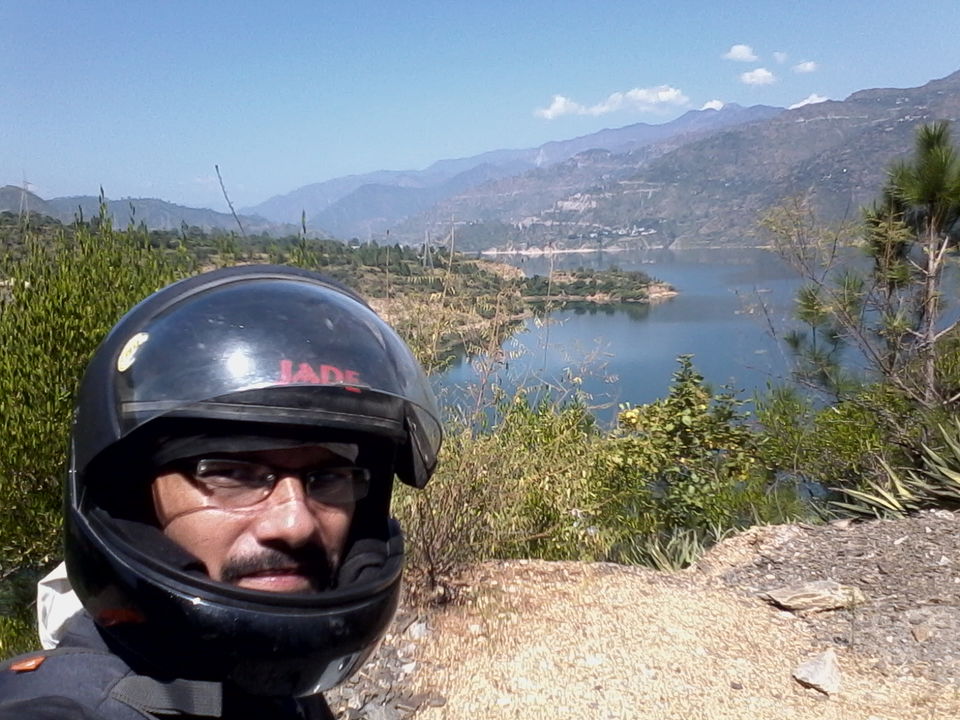 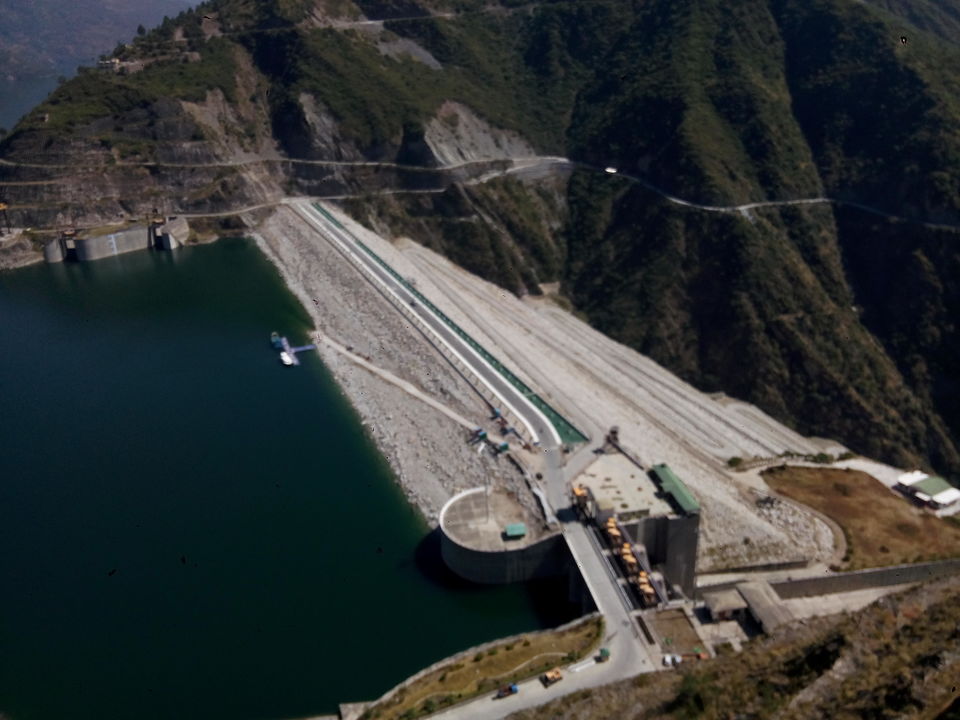 These were the outlets when there is overflow in the dam and were as large as half a football stadium! 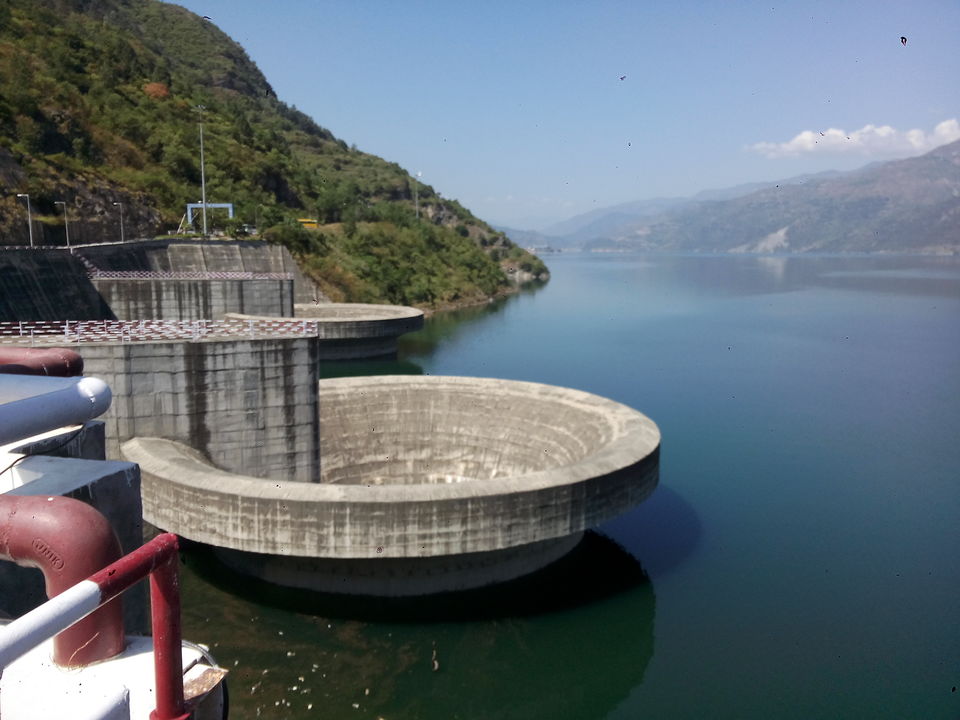 After spending sometime at the Tehri dam I decided to move to Chopta but took a different route as instead of catching NH-58 to reach Rudraprayag I went to Ghansyali on an isolated road not well paved and then from Ghansyali to Tilwara. I was glad I took this alternate route as the road was only one lane, isolated and perhaps went through the greenest portions of Uttarakhand. With almost no traffic I was riding solo in the fresh air in the lap of the Himalayas with the fir trees trees looking down on me.

"The road less travelled" are perhaps the most beautiful!

From Tilwara I had to reach Ukhimath which happens to be the winter home for Kedarnath temple idol and from Ukhimath the heavens begin.

The road from Ukhimath to Chopta is eternal bliss. It traverses through the higher Himalayas and a region blessed by mother nature. The leaves gently falling on the road, the green algae covering the banks of the road, the trees providing a natural roof and the silence. It all seems straight out of a movie and your heart is smiling with the feeling of it.

By the time I reached Chopta which is a paradise at a height of 8790 feet. The sun had set and I was freezing and it was a long weekend so it was crowded. I had difficulty in finding a room and had to settle for an expensive one. The blood in my veins was turning into ice and I was stupid enough to remain in a T-Shirt.

Finally I got a room and took a bath. By the way each hot water bucket costs Rs. 50 and every consumable item is sold higher than the MRP. To tell you there are many lodges and small camps in Chopta so accommodation is not an issue.

I was extremely tired by the long ride but next morning I had to start for Tunganath Mahadeva. In the morning I woke to with the Vedic chants coming from the temple and began my trek. 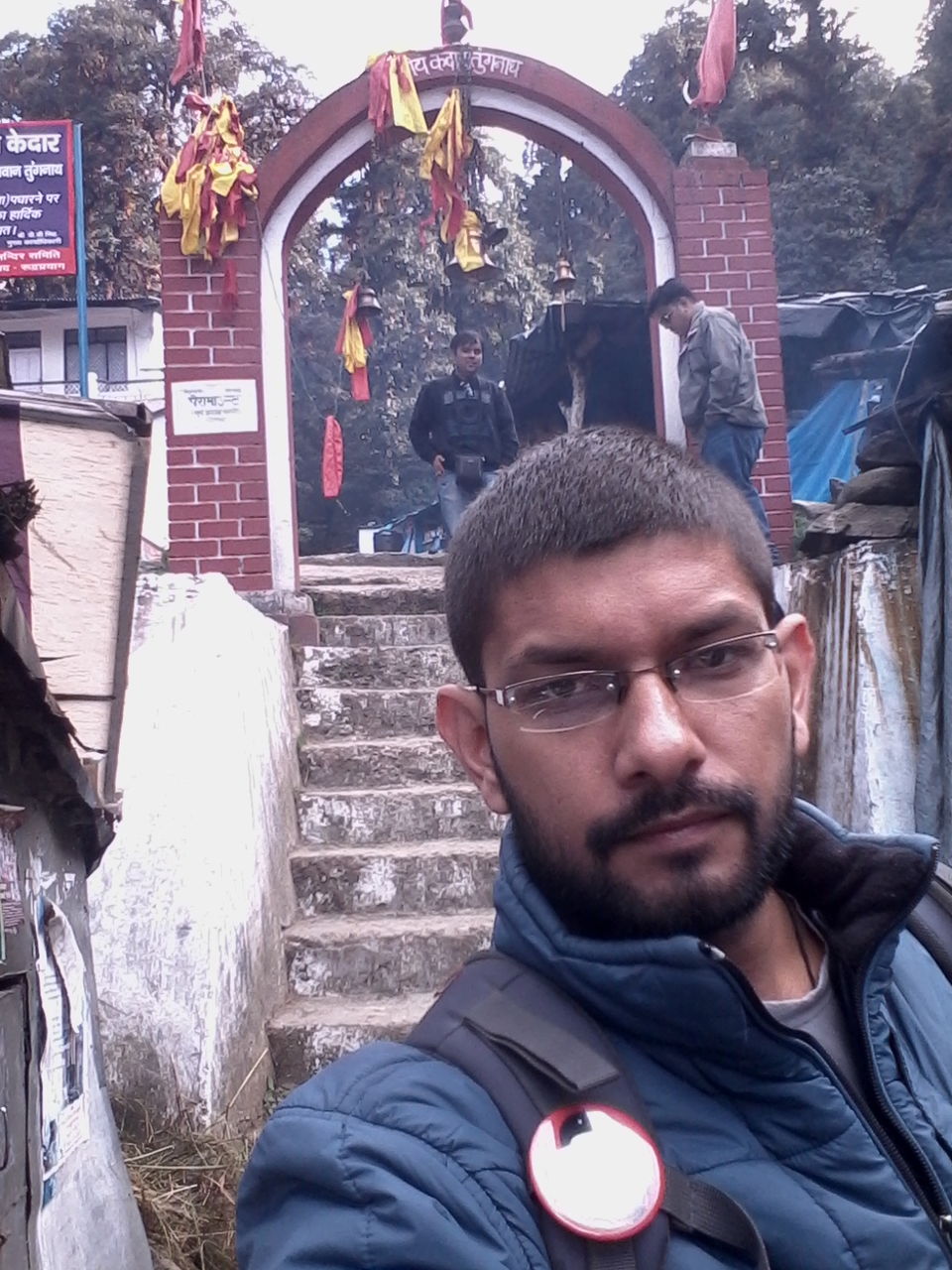 The trek to the temple is not tough but moderate and well paved. You have tea stalls on the way and can halt and enjoy the mesmerizing view.

I only had my horrible mobile camera with me so the pics are not that good anyway I was not aiming for many photos but simply to live and feel the moment.

The bad part was the the clouds were covering the entire peaks and obstructing the view. 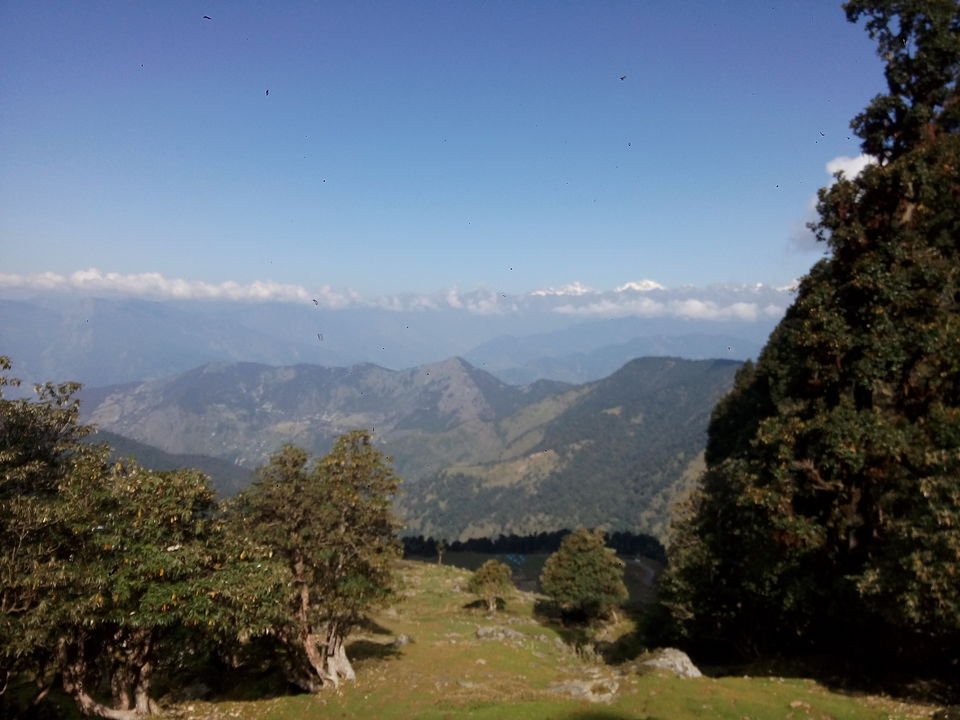 As you trek you reach extensive grass meadows which are called Bugiyal in the local language and look like a green carpet on the mountain slopes. Needless to say it looks amazing and is the favourite camping site for people.

The Bugiyal at the background 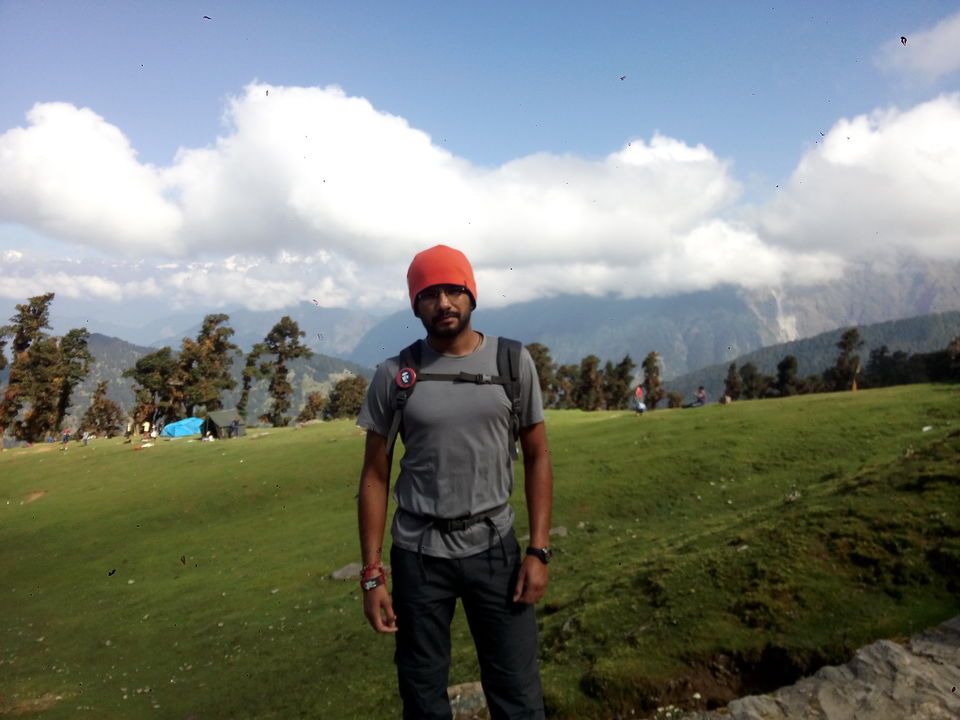 Please carry a warm jacket as it gets very very cold and also the weather is unpredictable and it can rain any time. Also carry some snacks like chocolates to give instant energy and water. Do not forget to carry a flash light with you.

I was trekking on the way with the clouds hugging me. They were flying through the mountains and sort of flowing like a river on the trek path.

The clouds covering the Tunganath Temple and Chandrashila peak 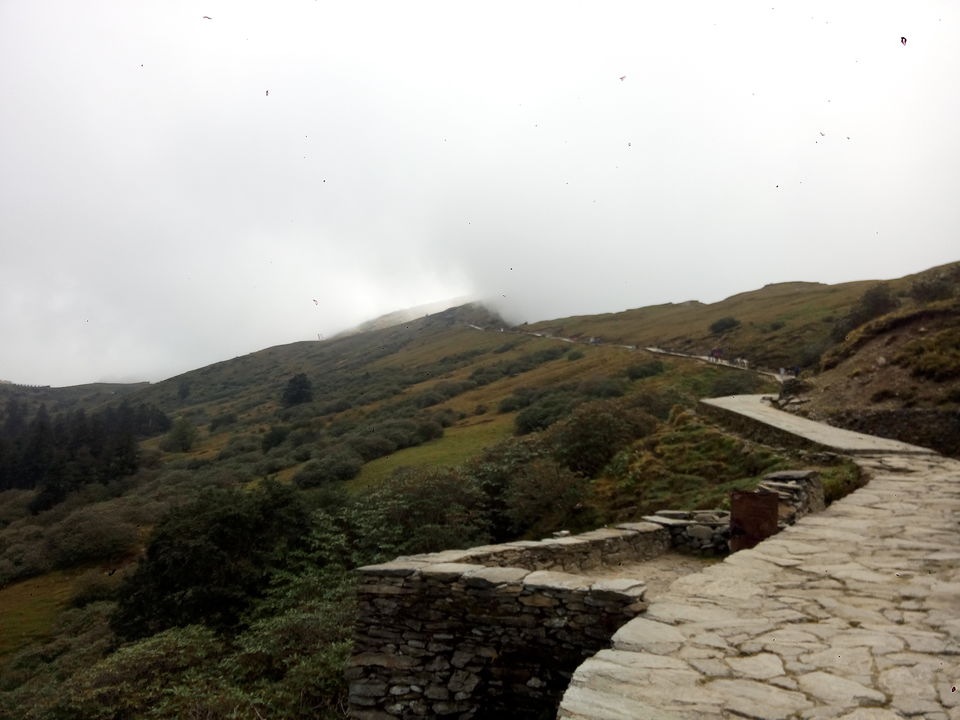 And finally I reached the divine Tunganath temple at 12000 feet. It is a mini version of the Kedarnath Temple. 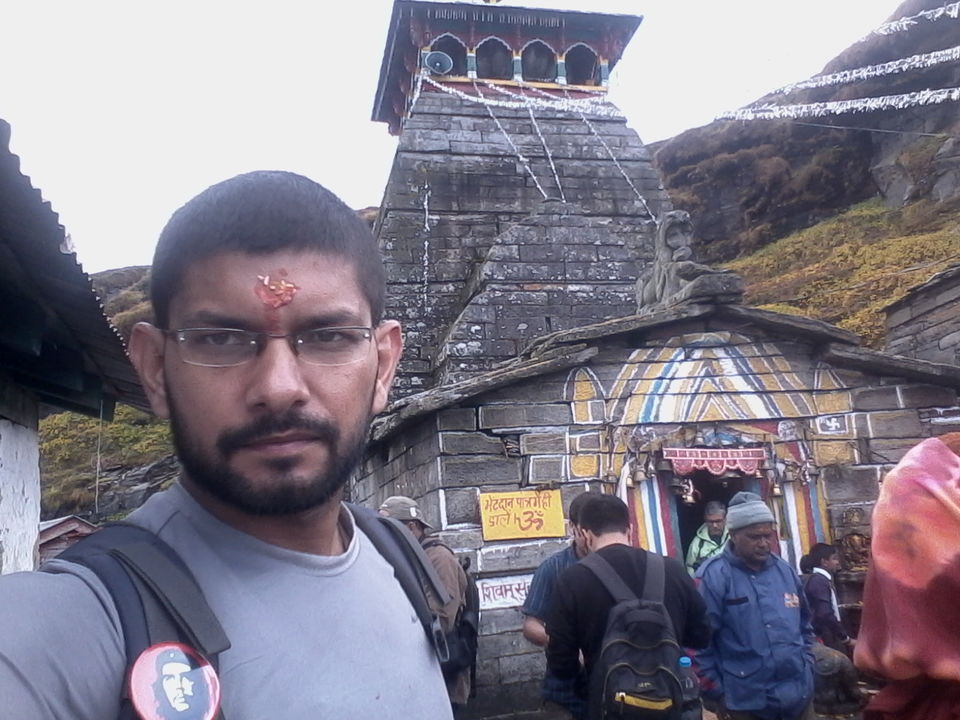 Tunganath is the Trittiya Kedar(Third Kedar) among the Panch Kedars(5 Kedars). The interesting story of the Panch Kedars is related to the Mahabharata when the Panadavas were searching for Lord Shiva for emancipation after the war but Lord Shiva was upset with them and took the form of a bull and went underground and the bull sprang up at 5 parts in the Himalayas which represent the Panch kedar and each Kedar has a temple dedicated to various body parts of Lord Shiva. The Tunganath temple represents the Bahu(hands) of Lord Shiva.

I am a devout Hindu so do not get confused with the communist Che Guevara badge. It has a long story behind and was gifted to me by a friend of mine.

I had taken a small printout of the Shiva Tandava Strota which I recited at the temple. Though my recitation was not that good but suddenly the clouds cleared and the sun came out. I took it as an acceptance of my prayer by almighty. :)

It was also Pitra Paksha(Shraadh) going on and when I visited the temple so I donated a small amount to the temple and prayed to Lord Shiva to grant Moksha to the souls of my ancestors.

For people who do not know what Shraadh is. It is a time period in the Hindu beliefs where the souls of your ancestors visit you and you perform religious ceremonies to seek their blessings and for their eternal peace.

And then I went to the top of the Chandrashila mountain which is about 13100 feet. It is on this mountain the temple is located. After 1 km. trek I reached the top of the peak and the view was beautiful.

A small temple at the top of the Chandrashila peak 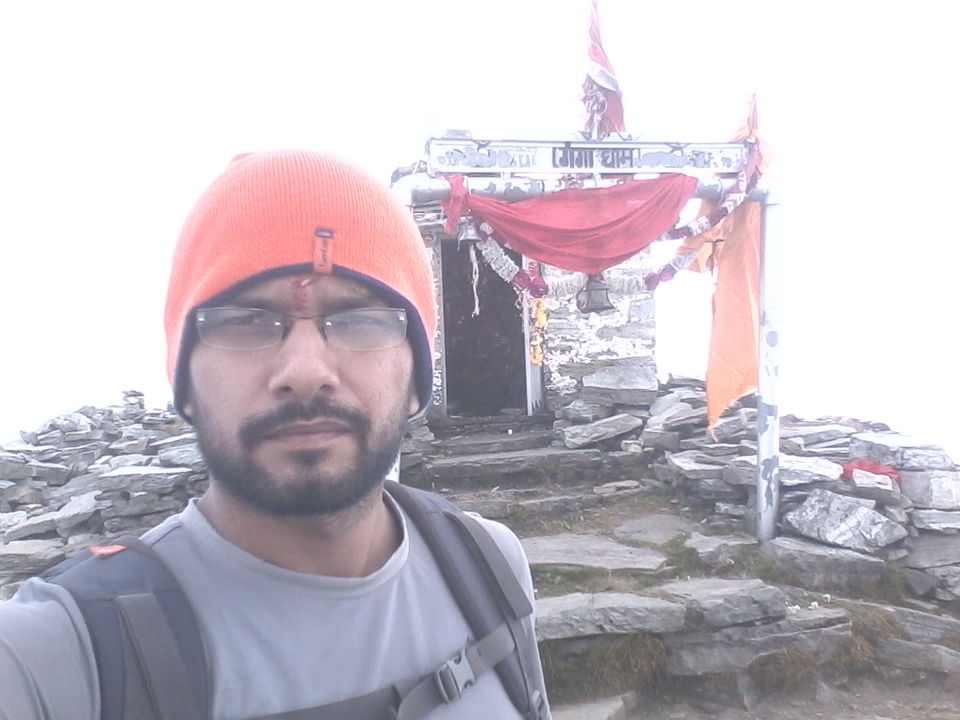 From the peak you get a 360 degree view of highest of the highest Himalayas but unfortunately the dense clouds spoiled it for everyone but then people told me that one has to visit early morning, as early as 6 o'clock, to witness the sunrise and it's reflection on the mountains so I decided to come again the next day despite of being thoroughly exhausted.

The great part was that I made a couple of friends on this lone trip.

In the night I a saw miracle of mother nature. I was looking at the sky and was thinking that these clouds are not going anywhere but what I was assuming to be a cloud was not a cloud but the Milky Way galaxy!

When I concentrated a bit I was astounded by the shear number of stars scattered like wheat is scattered in a grainery. You look at them and then think about your existence. How small you are in this eternity. How little you last. How little you live.

You just keep staring and staring like a child looking at a new face and for me it was the face of mother nature. 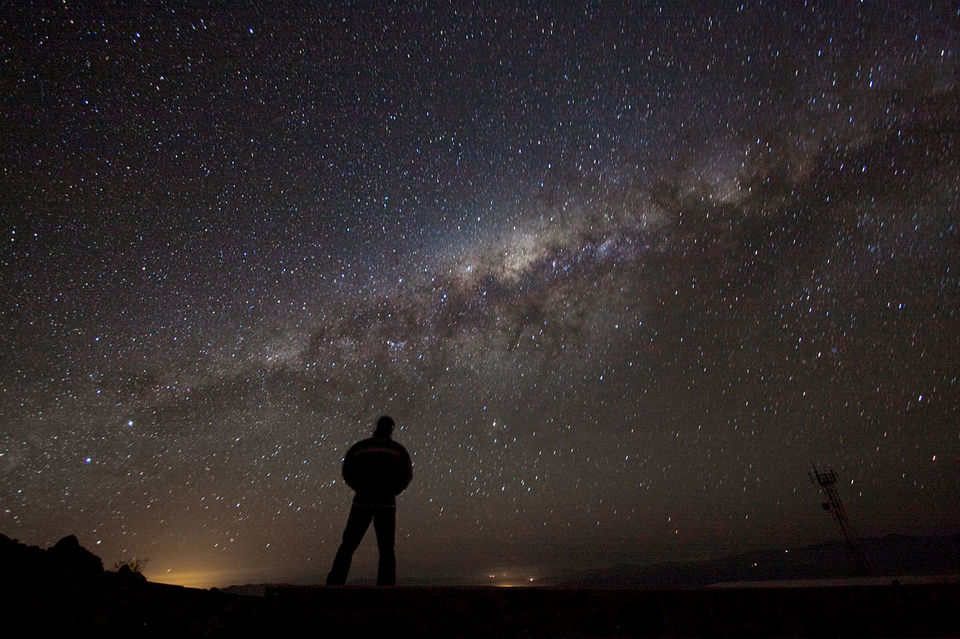 On the way back I pulled up a muscle in my thigh and was in deep pain and could not even sleep all night but was determined to see the sunrise kissing the mountains so next morning I started at 5 when it was still dark.

It can get extremely dark in the forests as if you are in a black hole and I was alone with my thigh paining and could only hear my breath and heartbeat.

This is how dark it can get. That is the beam of my flash light on the way. 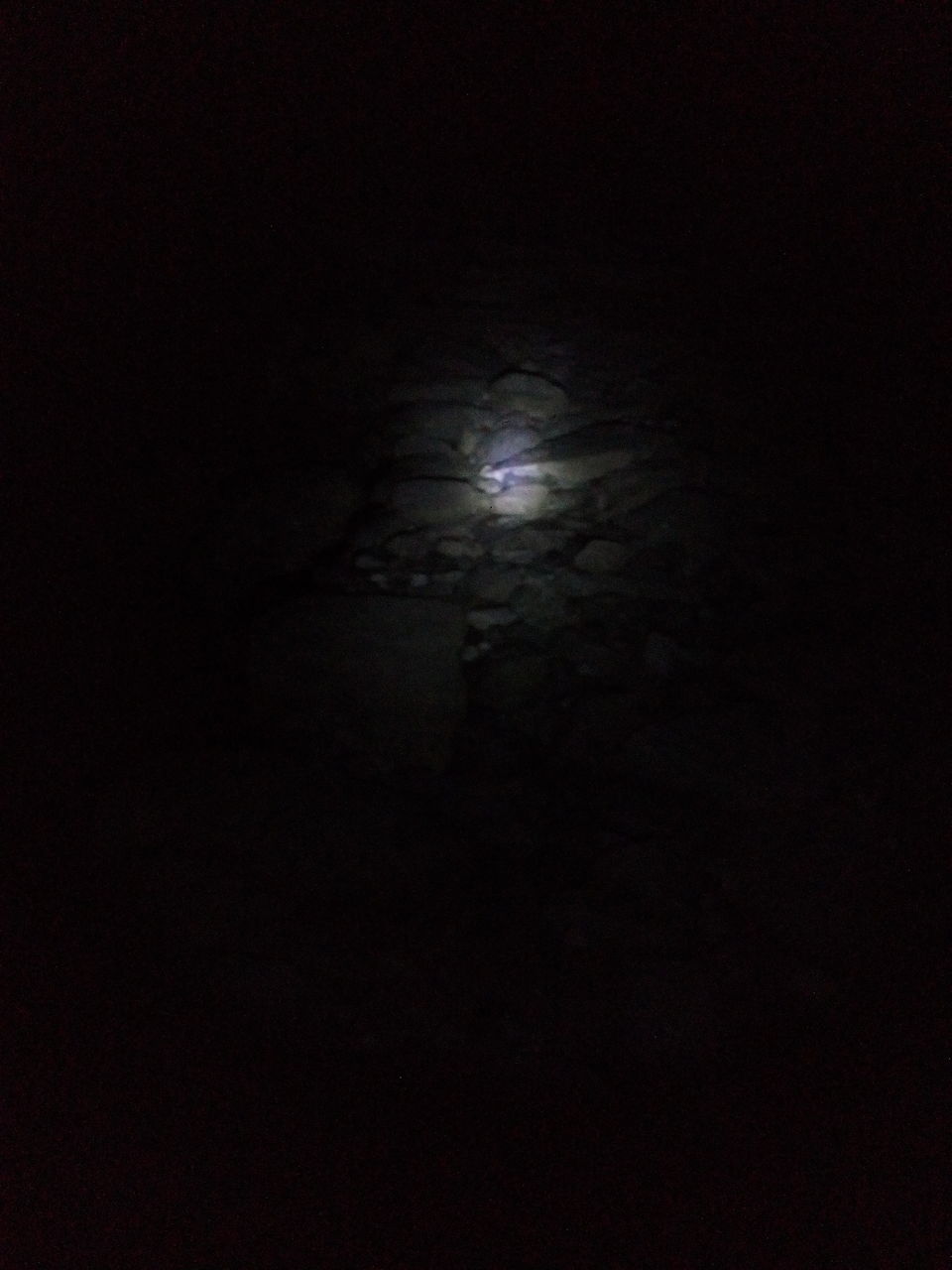 But the clouds seemed to be relentless though were not that much dense since yesterday but were still playing hide and seek with the mountains. The mountains peeped out of them like someone peeping out of the window and their gigantic size was visible with the sunlight falling on them and then they went back hiding behind the clouds. So thankfully I could get a glimpse of the Nanda Devi and Chaukhamba mountains.

The Chaukhamba Peak peeping from the clouds 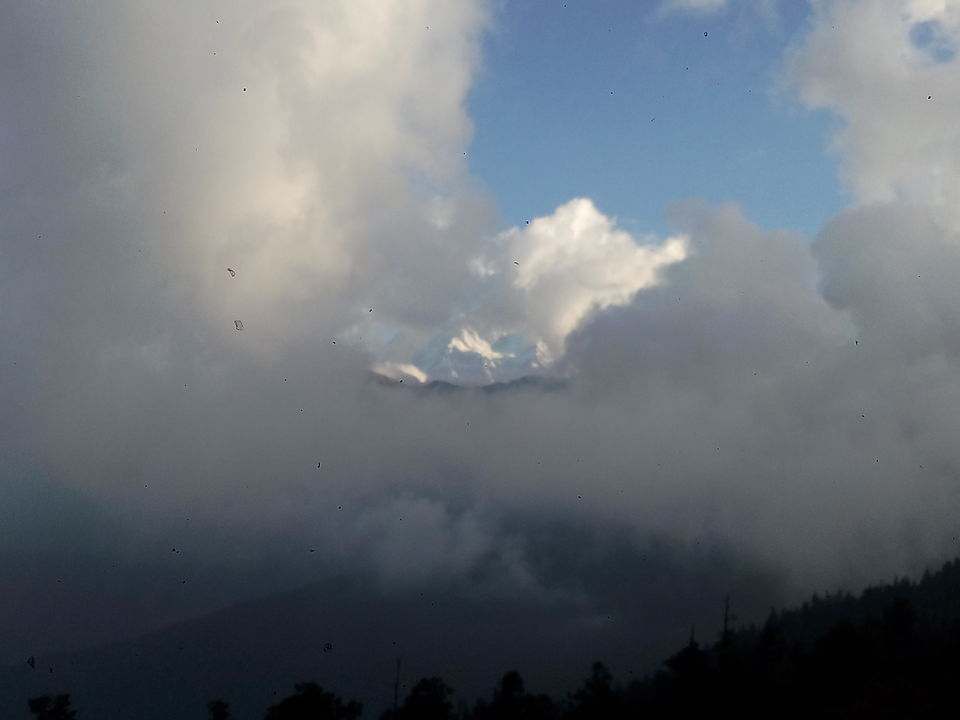 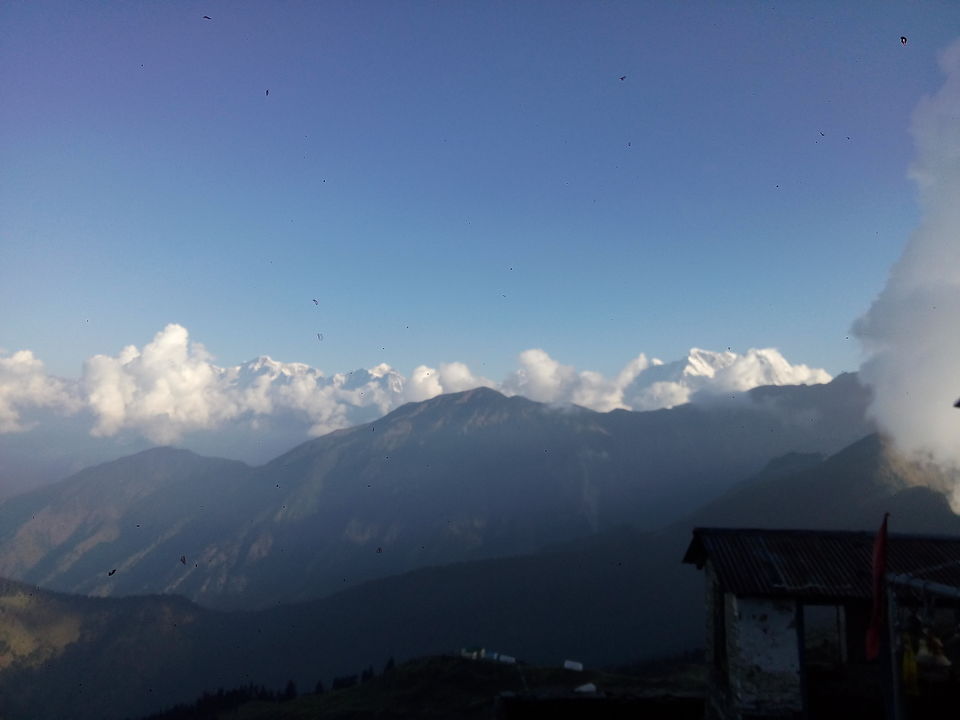 The picture cannot describe the beauty that was in front of my eyes.

No wonder one feels Lord Shiva stays here. He breathes here with the holy Shakti. He blesses everyone who come to visit him.

After taking the blessings and seeing the mountain view I decided to go back to my den. Started my bike and began receding the Himalayan heights.

I held the clutch so that the bike noise remained minimal as I wanted to here the silence. Damn that silence speaks peace in your ears.

Stopped for food at my favourite eating place called Madras Cafe in Rishikesh.

Reached Chopta in the evening and slept like a horse.

2 kilometres trek to Chandrashila Peak. Beautiful View from Chandrashila peak of the Higher Himalaya at 13000 feet.

Trekked to get a better view of the peaks.

Day3: From Tunganath to Rishikesh

Retreated from Tunganath to Rishikesh and stayed in Rishikesh for a night.

Day4: From Rishikesh to Gurgaon